I had been putting off writing about the last day of our Eastern Turkey Road Trip. It could have been that our week in Lucinda had reminded me that North Queensland was a travel destination in it’s own right, prompting a flurry of Lucinda Posts with more to come 🙂 but the real reason was I did not want the road trip to end… again.

Writing about this particular Turkish trip had been a bitter sweet experience.  While grateful for the incredible sights, intriguing people and delightful experiences of Eastern Turkey, the need to keep moving inevitably led to missing out on many things.  Two weeks would have been a better time frame.  We don’t often revisit Countries, but after spending 6 weeks in Turkey late in 2013, we are keen to return.

Our last night on the Black Sea Coast was spent 5km south-east of Macka itself being 29km south of Trabzon, at Cosandere Tesisleri Pansiyon, the closest place we could find to Sumela.

This huge pansiyon had only ourselves and another two guests overnight and we had the Tesisleri to ourselves for both the evening meal and breakfast. And what a breakfast it was!  There was a delightful cheese, oddly both crusty and smooth, yellow and crumbly; whole fig conserve with sliced lemon and orange; local honey; olives/tomato/white cheese and eggs fried in butter.

The corn soup I ordered for dinner was definitely an acquired taste – I should have realized it would not be made from the sweet corn we are used to.  On the other hand the beef and tomato dish was as fiery as it was delicious although the portion was small.  My still tender stomach quaked.

The huge Tesisleri was intimidating with just the two of us so we headed out onto the a smaller first floor terrace (Top right in the below collage), although I am not sure the staff agreed with our choice. 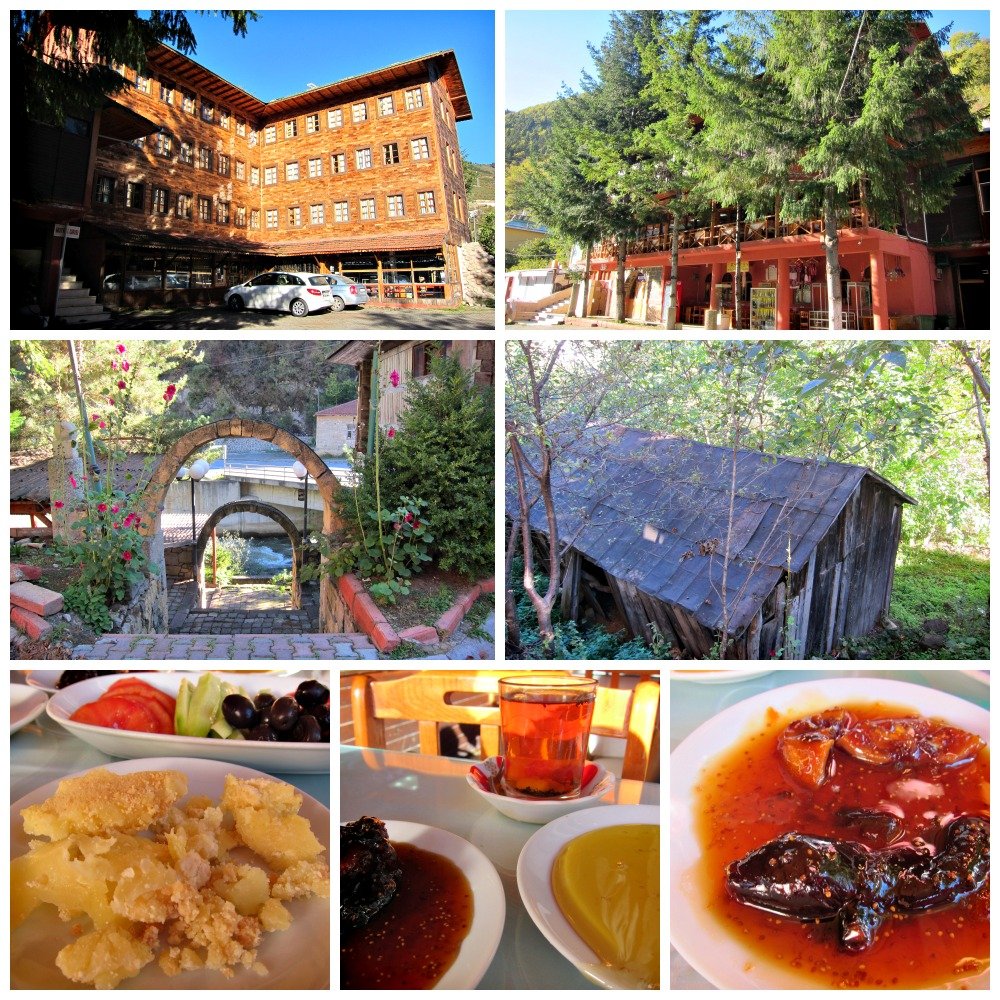 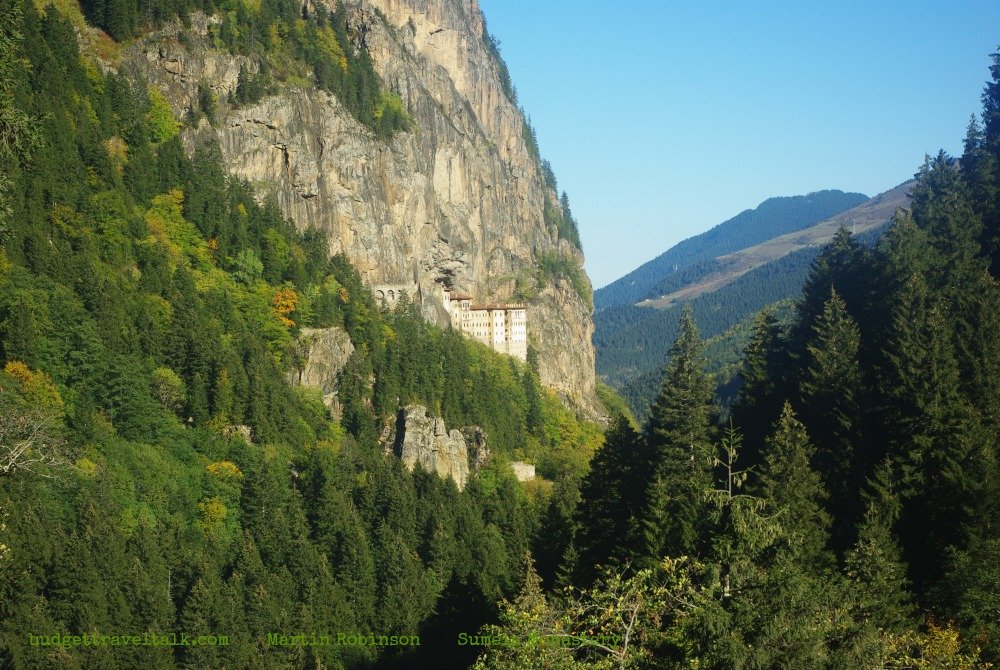 It was this vision of the Monastery clinging to the cliff that drew us to Sumela, but we did not realize just how beautiful the setting would be.  Altindere Valley National Park (entrance fee 15tl per vehicle) had picnic tables beside the river and a restaurant (2km past the gate), before the road climbed through the mostly evergreen forest. 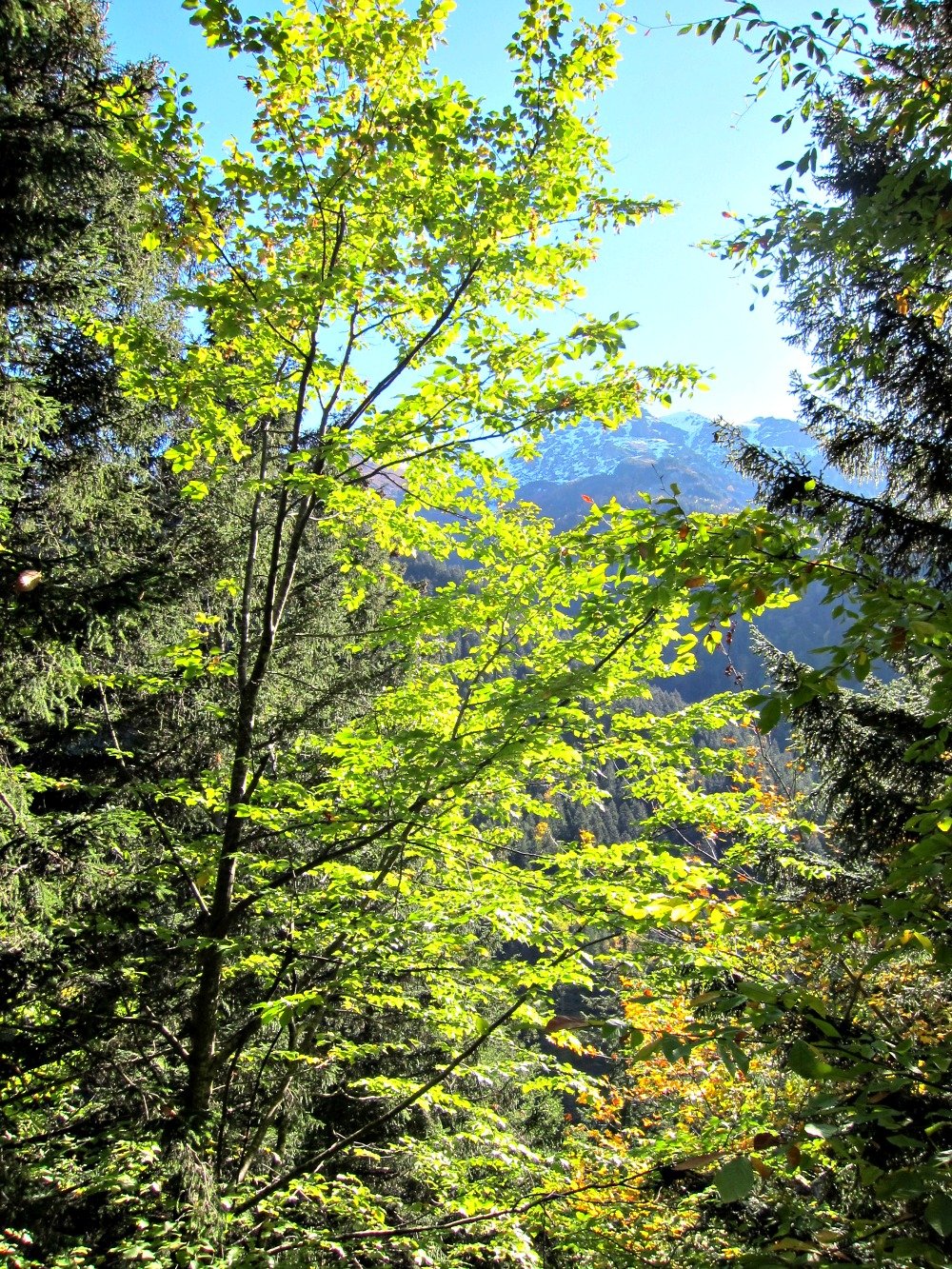 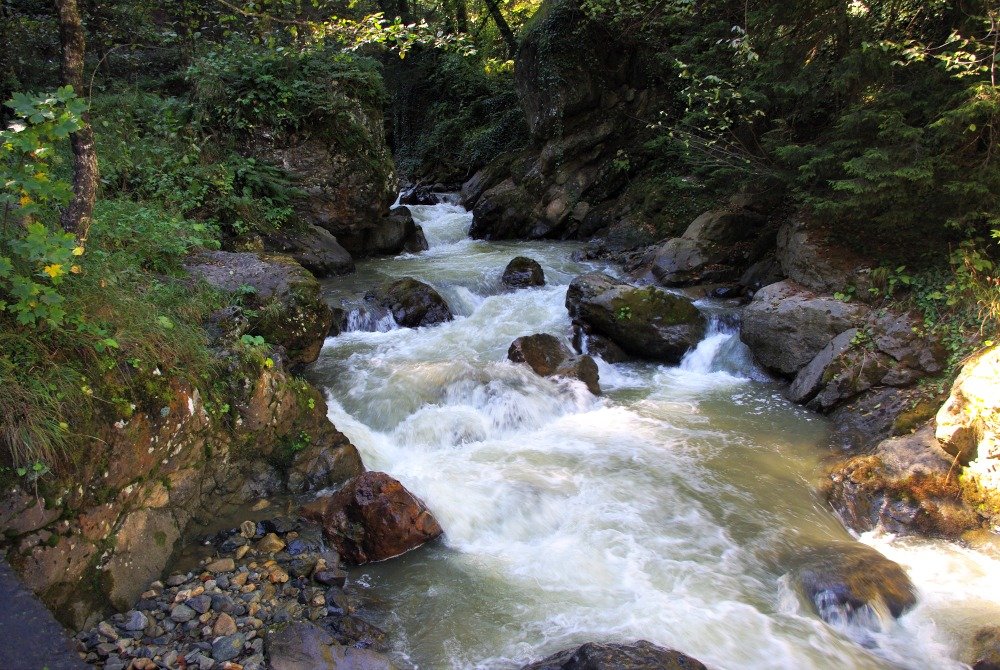 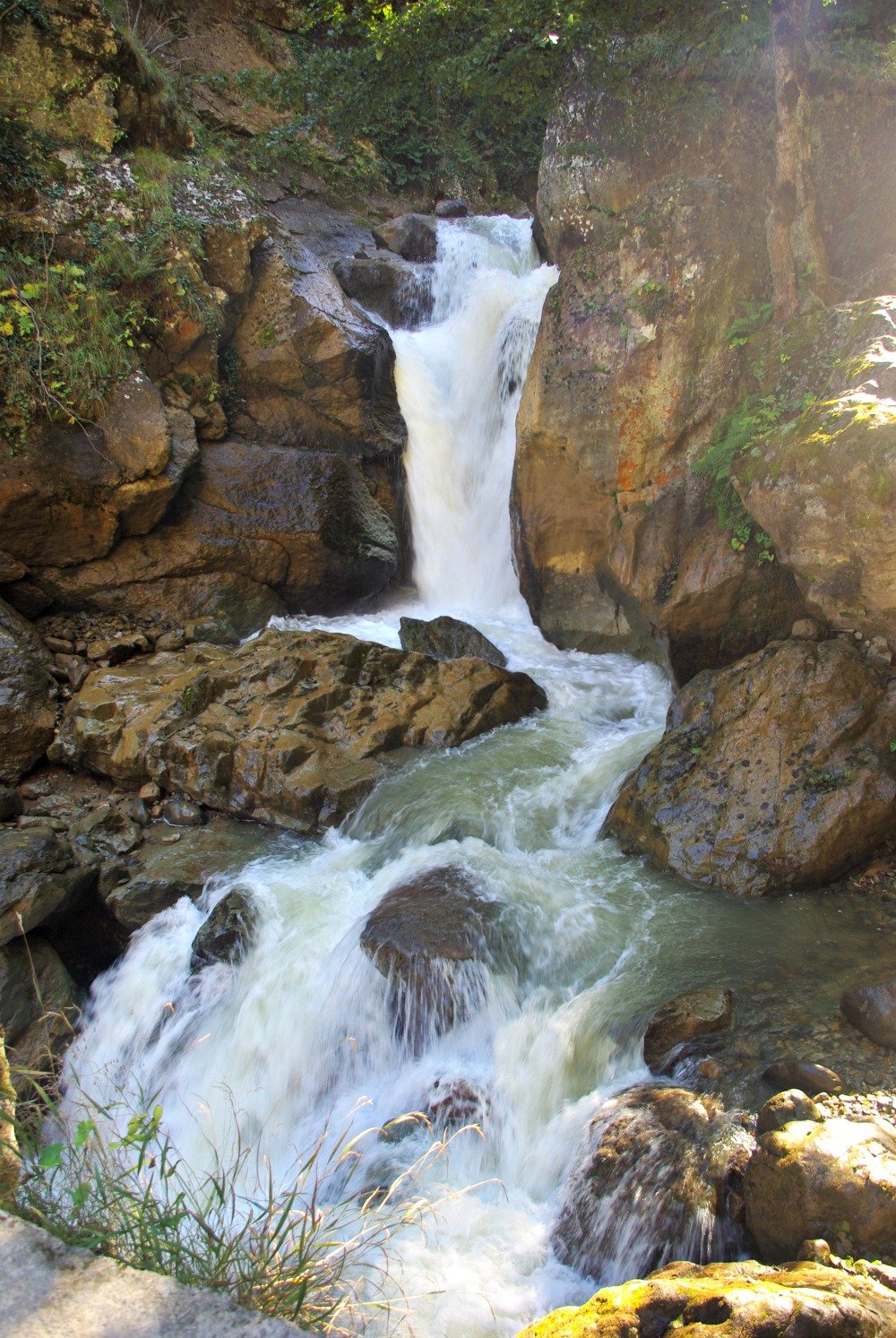 A walking trail from the restaurant and another that started 1km and two bridges further up the mountain road both took 35 minutes to reach the monastery.

The mountain road to the Monastery could be hectic so we were keen to beat the crowds, although it was not busy at all when we were there (Saturday 12th October, 2013).

Having a vehicle we drove right to the end of the road, after which there was a 300m forest walk and a steep set of stairs to climb to the Ticket Office. The suspense was building. 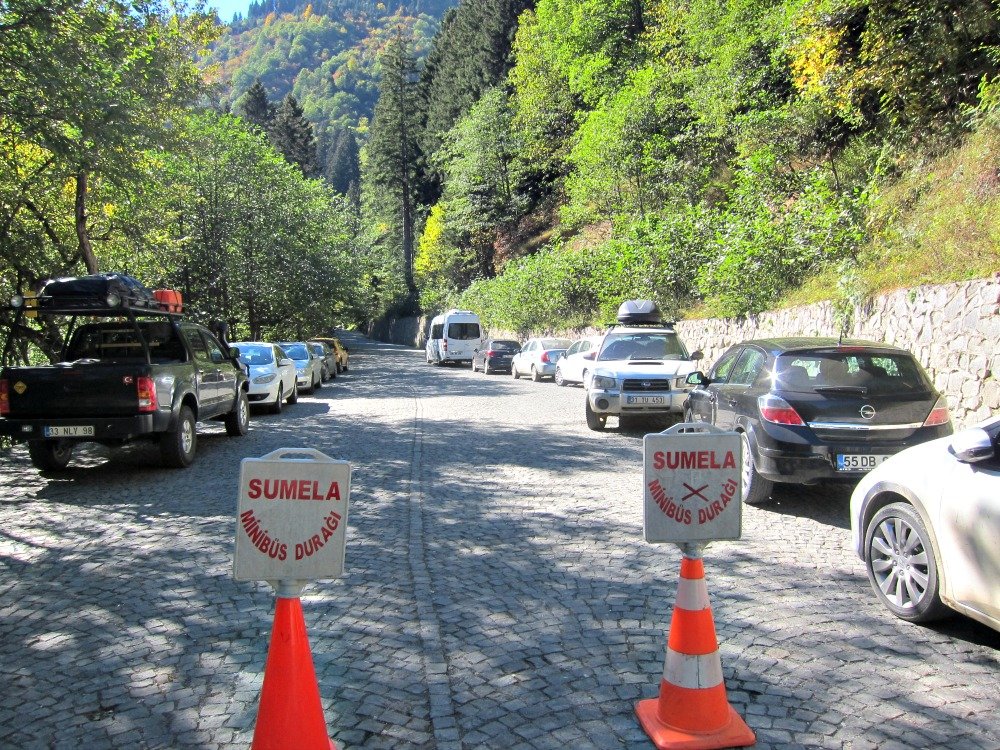 The path reverted to an unmade track overcome in places by tree roots making it unsuitable for wheel chairs or prams. 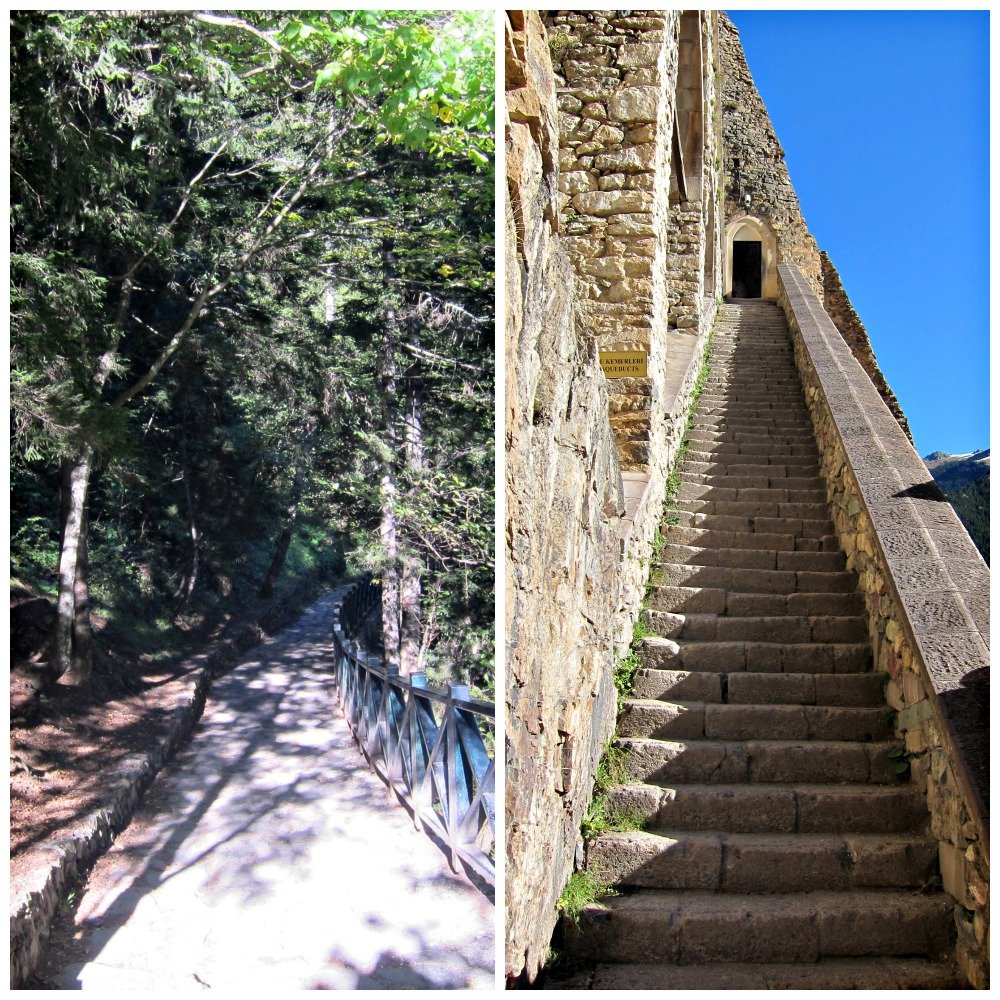 I had thought that the well known cliff front facade would be the full extent of the Monastery buildings, but No.  After entry we looked down to a cluster of buildings around a courtyard, with church and chapel formed by a mix of carved rock and existing caves. 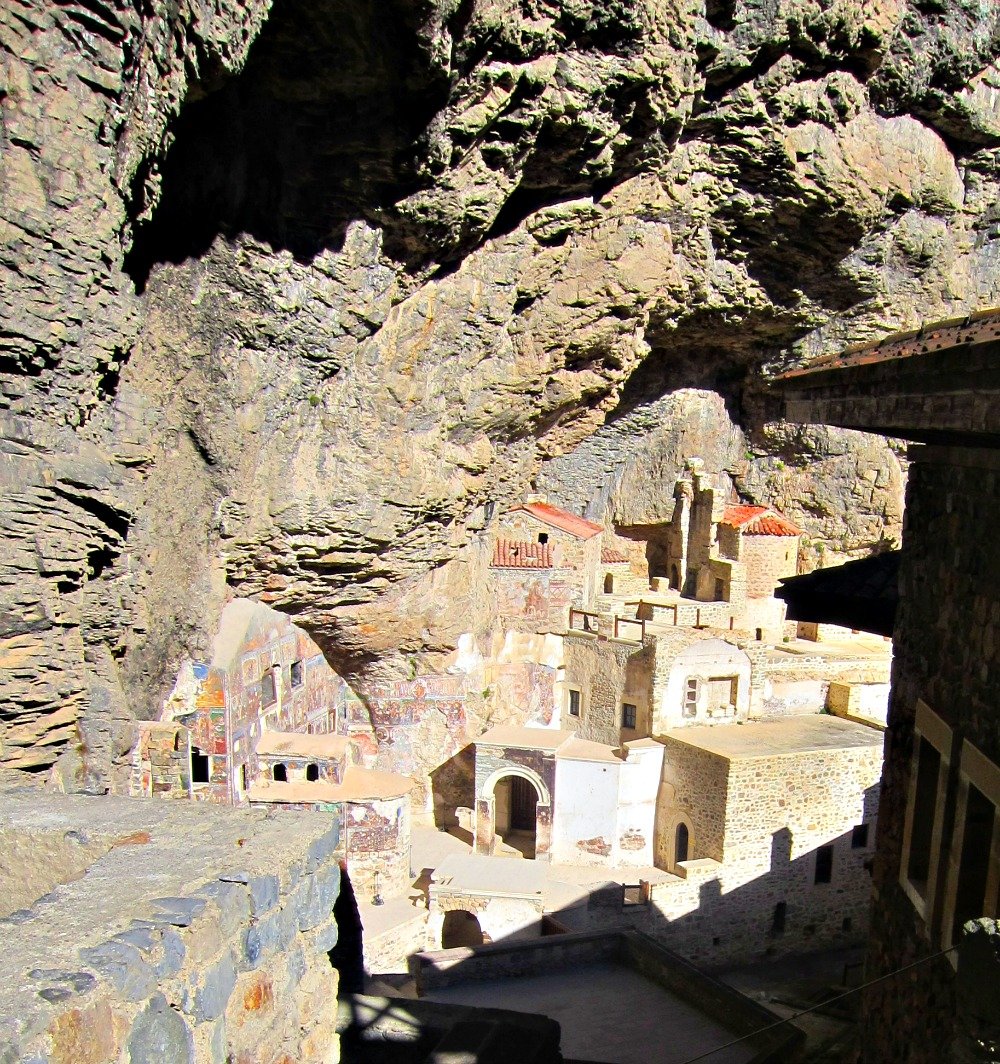 Although the frescoes had been defaced (by U.S. and Russian troops) and used as target practice by local shepherds, the substantial remnants were large with impressively strong colours.

The Virgin Mary of Soumela Monastery, was built in the fourth century by Athenian priests and was abandoned after WWI when the Greeks from nearby Trebizond (now Trabzon) were evicted from Turkey.  It is understandable, albeit sad, that uneducated shepherds used the frescoes as target practice under those (end of war) circumstances. 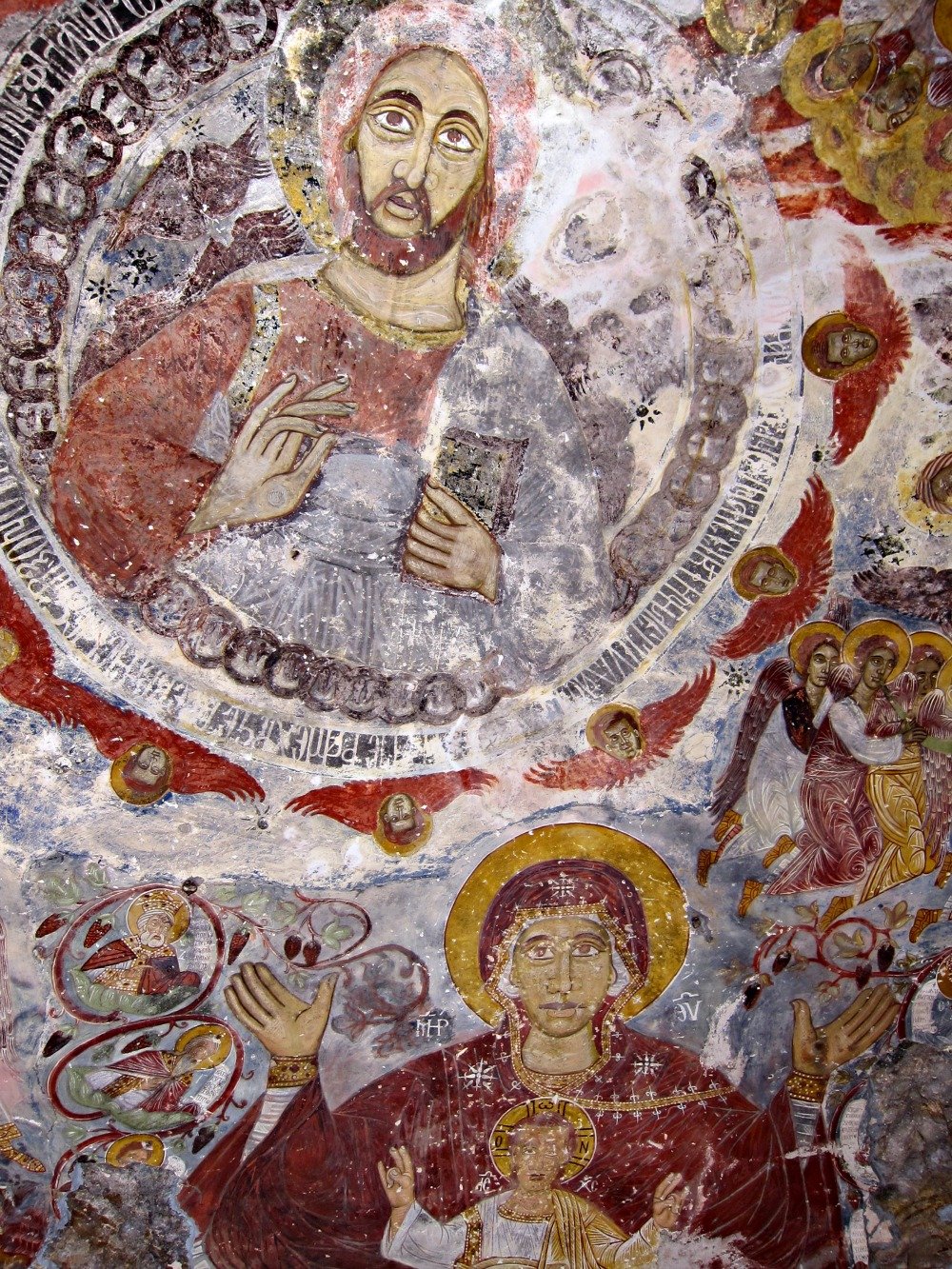 The frescoes date from the 9th Century although most are from the 18th and 19th depending on sources. 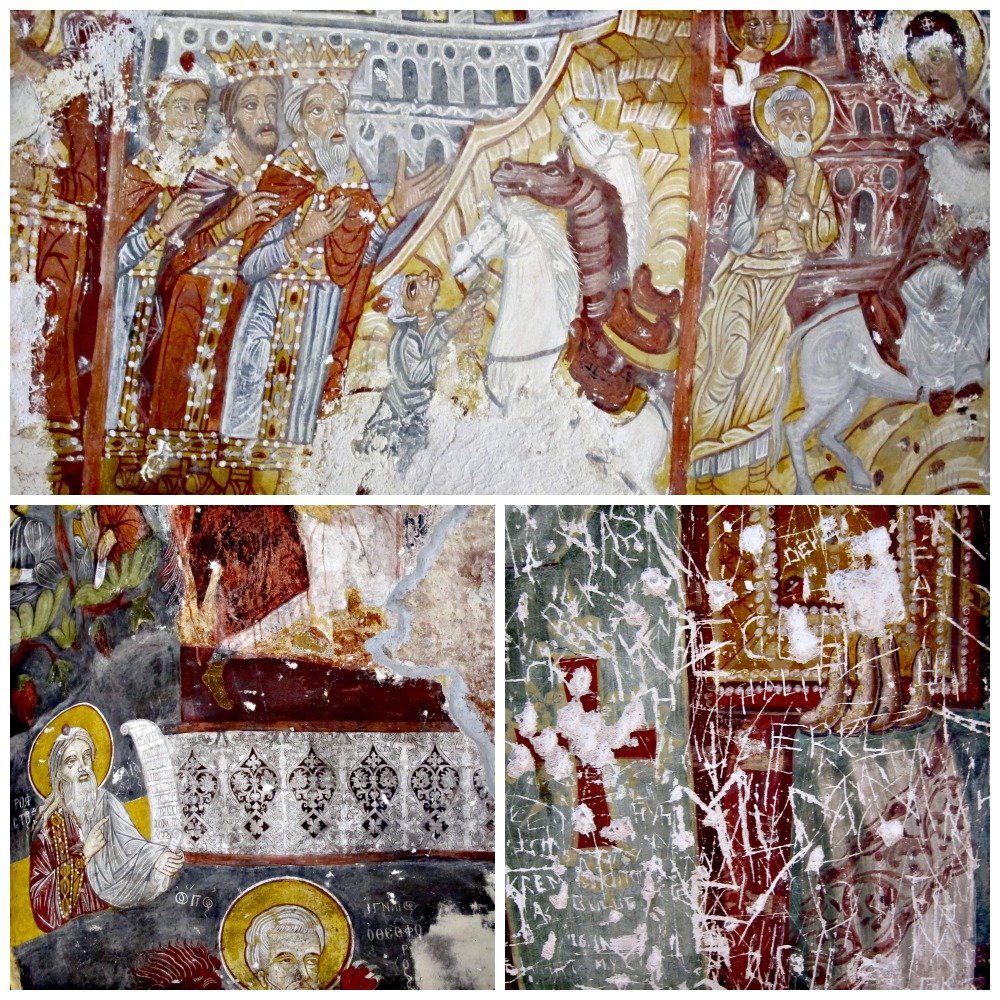 The outside walls of the chapel were covered in frescoes as well, although weathering had dulled them. 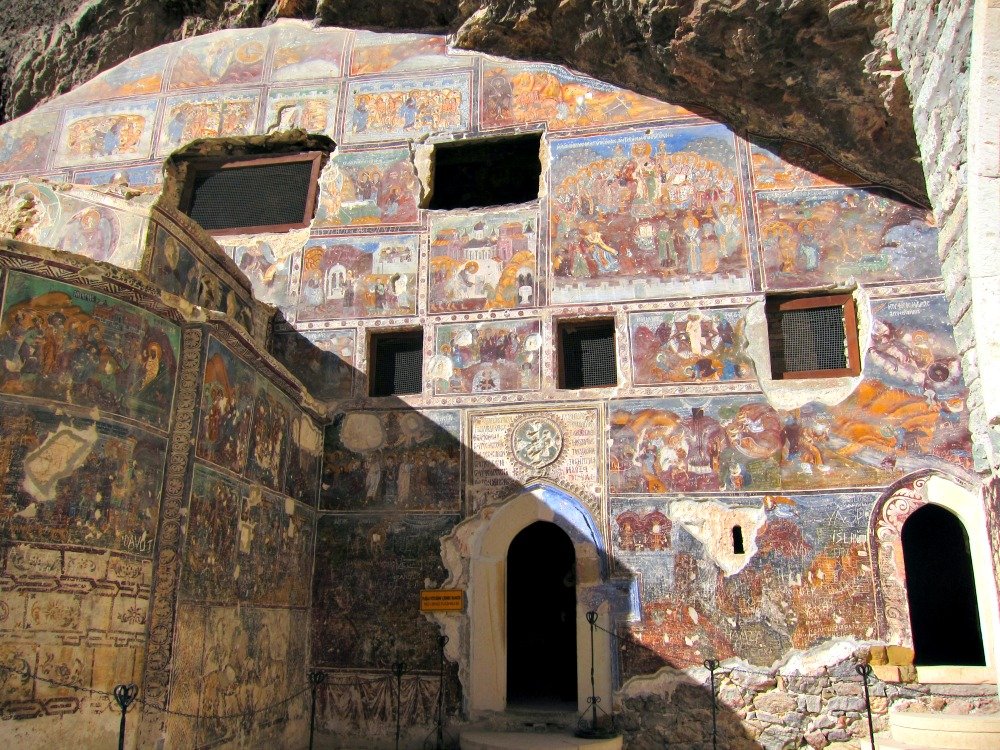 The View back toward the entrance. 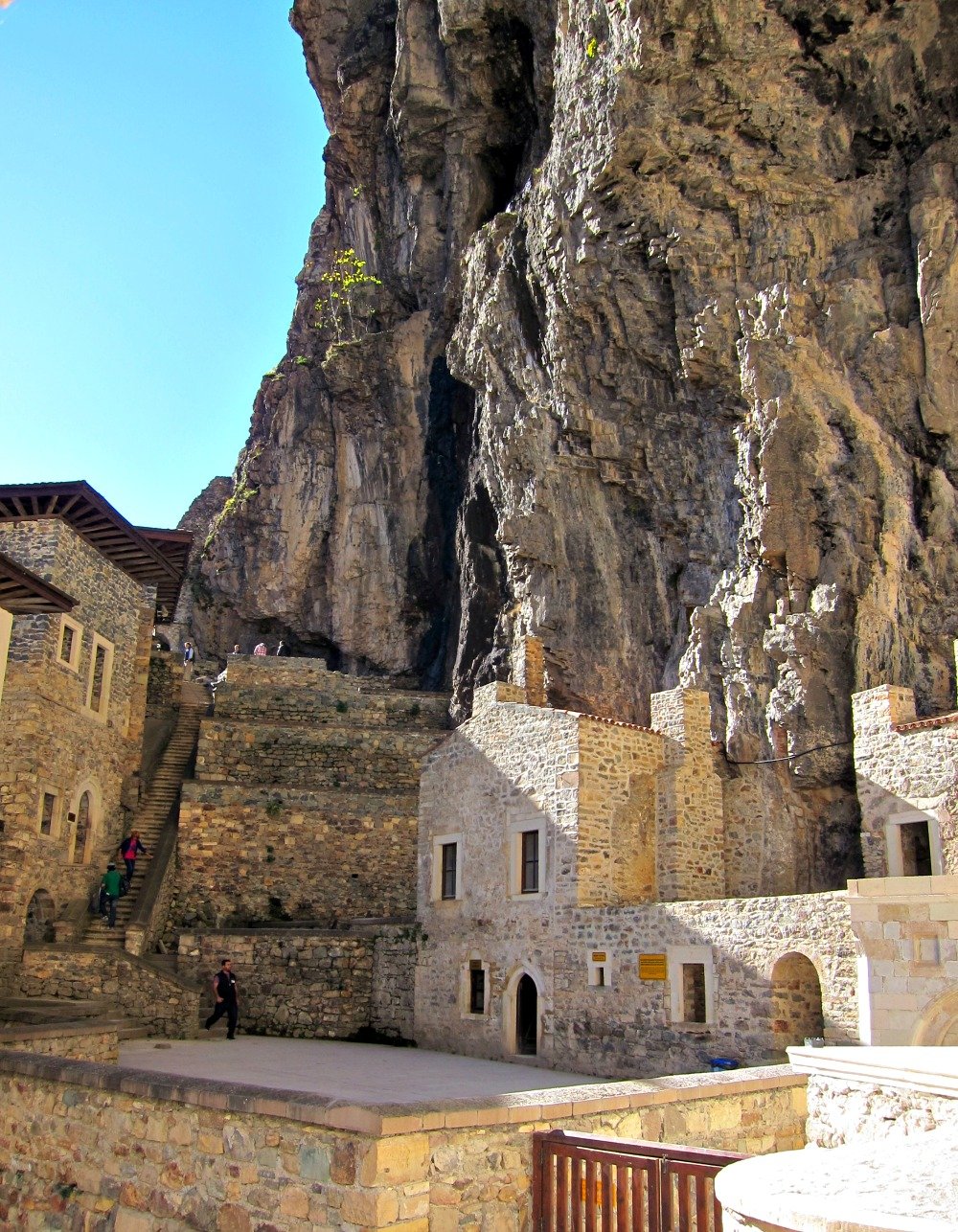 There were an array of clearly named restored buildings including a cold storage room, bakery and dining room to name a few.  Most of the rooms in the front section overlooking the valley were closed but we did enter one from which I captured the downward view.

Windows with a View. 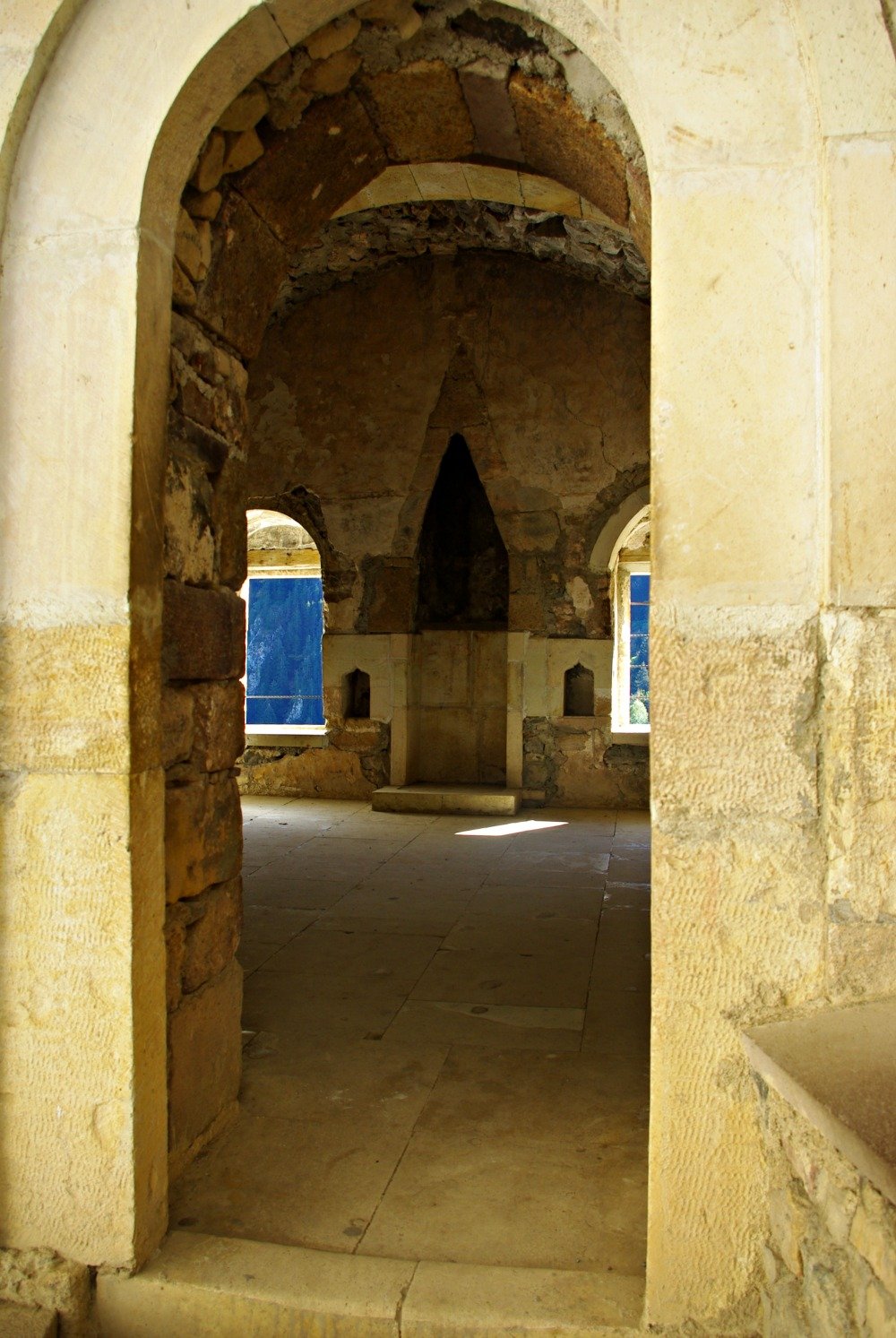 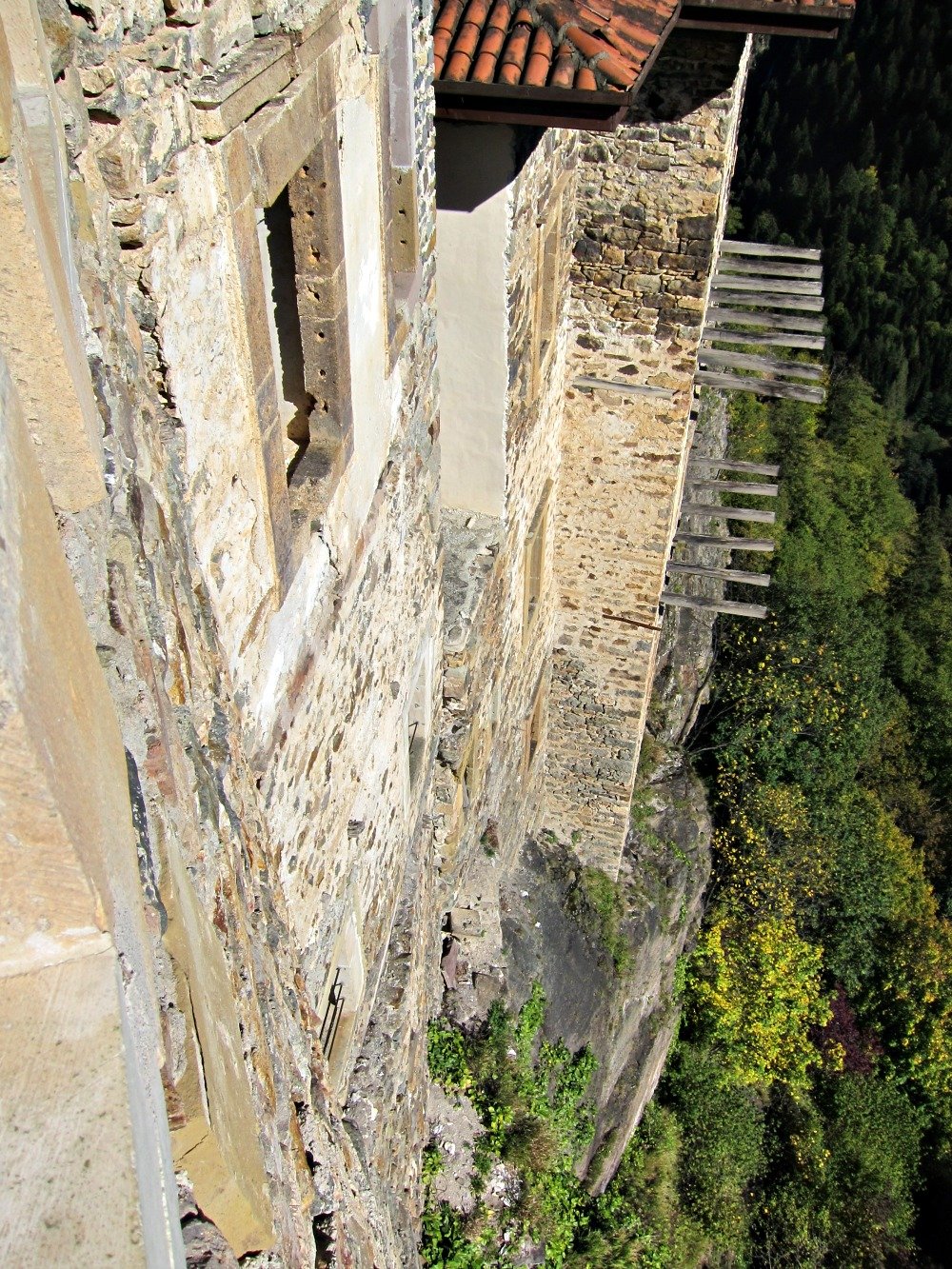 One last thing of note was the cafe.  Workers busied themselves burning leaves. An atmospheric recording of violins and guitars drifted from the cafe (true) and while we sipped our drinks I had to remind myself this was a real experience and not one of my travel day dreams. Across the valley an occasional show of Autumn colour broke the dark green of the pines and the snow capped peaks opposite seemed close enough to touch. Swirling mists are common at Sumela, but it was blue skies all the way for us.

What a fantastic setting for a monastery. 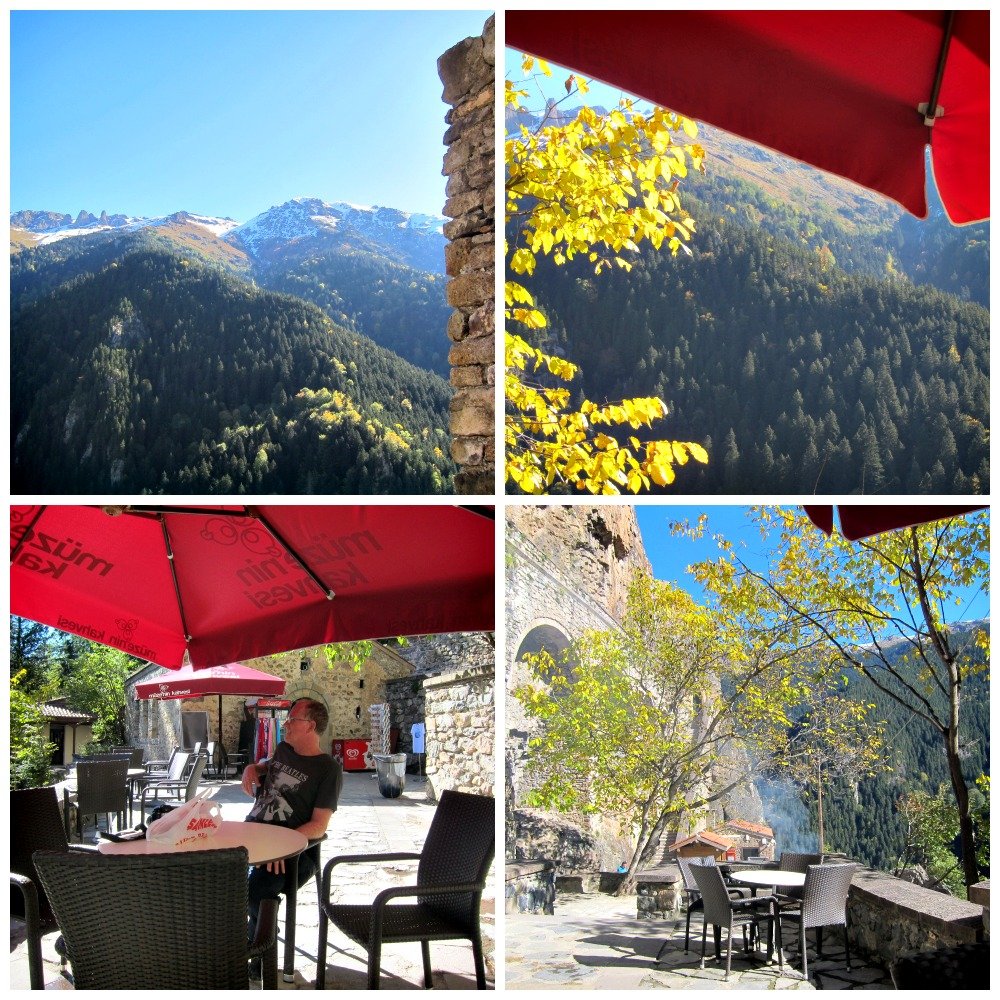 Back in Macka we stopped at a Petrol Station and pressure hosed 8 days of mud from the car for 1tl before heading back along the coastal D10 in search of Hamsi and Laz Boregi. We found Hamsi (Black Sea Sardines) at the Belemir Restaurant at Yomra, where of course we were the only patrons.  Our waiter was friendly and so happy when I requested the bill in Turkish that he hi-fived me.  When I asked for Laz Boregi he happily directed us down the street to a restaurant that we would surely have overlooked without his advice.

It had one of those huge signs out front that in Australia screams Car Dealership, while it’s interior was similar to a Sizzler Restauarant with a central salad bar. We headed for the dessert (pastane) bar at the rear of the food section where ladies piled our plates with two huge slices of Laz boregi each!  Had we known we would have just ordered one – I have lost count of the times I have said that in Turkey 🙂 Having just devoured a whole plate of Hamsi by myself, I only managed a few bites of the dessert, which was beautiful. Marty heroically ate mine as well.

What is Laz Boregi?  Visualise Baclava filled with custard and drizzled with sugar syrup.  Ground hazelnuts could also be sprinkled on top but weren’t in this case.

That Hamsi was every bit a crunchy as it looked and the taste was surprisingly delicate.  Very Moorish.  We had seen Hamsi prepared in this way at the Trabzon markets and in Camlihemsin but it is eaten in other ways, like the Laz speciality Hamsi Pilaf.

With Hamsi pilaf the fish are pinwheeled on the bottom of a cake tin and stacked around the sides, the pilaf fills the middle with more hamsi on top, after which it is baked for half an hour and then inverted onto a serving plate.  The hamsi from the bottom are then on show as a crispy crust.

What is not shown in this photo was the delectable fresh salad and spicy tomato paste that also arrived at the table.

35tl for two meals, softdrinks and salads to share. 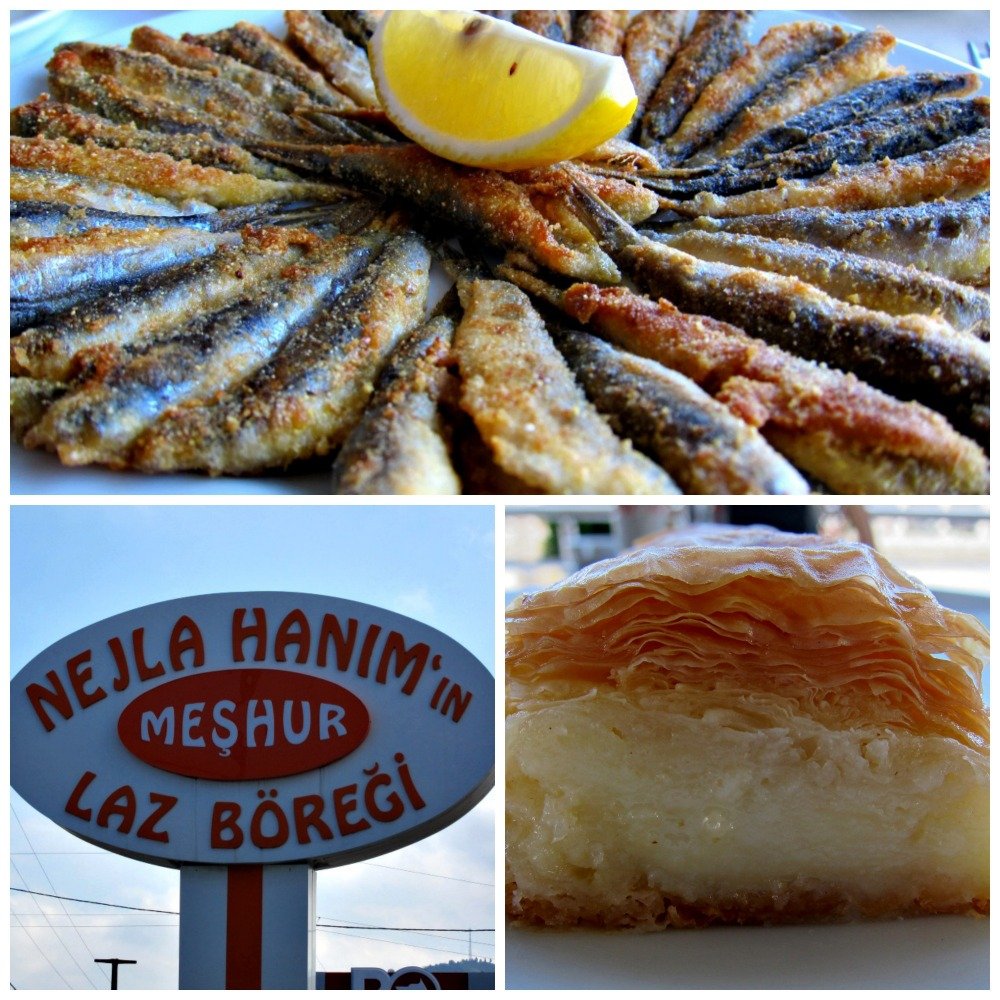 We had arranged to meet our Car Rental man at the front of Trabzon Airport, but after 20 minutes he had still not arrived.  Upon phoning him we discovered he was stuck in traffic on a local bus. Thankfully we had allowed extra time to allow for any glitches and easily caught our flight back to Istanbul (Onur Air 1hr 40 mins).  It was typical that when we requested dropping the car off at the airport he had happily agreed, even though for him it meant catching a bus from Trabzon. We had no idea.

This post is linked to Nancie’s Travel Photo Thursday at Budget Travelers Sandbox.

You can find other posts in this series below.

…The Ruins of Ani

…Surrounded by Cows at Ani

Lucinda in North Queensland is a Boating and Fishing Paradise
Next Post: Dondurma or a Magical Turkish Icecream