UPDATED 6 SEPT 2022. It’s a short ride on the Dubrovnik Cable Car to the top of Mount Srd Dubrovnik, the dramatic backdrop to the old town of Dubrovnik Croatia. Always the protector of Dubrovnik, Mt. Srd is the location of the Homeland War Museum Dubrovnik, Panorama Restaurant and the best Dubrovnik Sunset views.

Dubrovnik became a maritime power in the 15th and 16th Century and from the early days was built to impress. Although Dubrovnik’s roots are Medieval, she is a modern day prima donna, performing her role as The pearl of the Adriatic with style.

Although the walls and buildings of the old town sustained a horrific pounding during the Homeland War, they didn’t crumble entirely and were promptly rebuilt.

My first walk on the 300m main thoroughfare known as The Stradun, was at dusk and hundreds of tiny sparrows swooped overhead in noisy laps. Natural light lingered in a deep blue sky and the pavement, polished by a million feet, reflected the yellow glow of the wall lamps. The excitement of that walk, admittedly shared with many others, will never leave me.       Jan Robinson

You can see the Stradun running left/right, parallel with the well lit wall, in the photograph below. You can see images of Dubrovnik old town here. 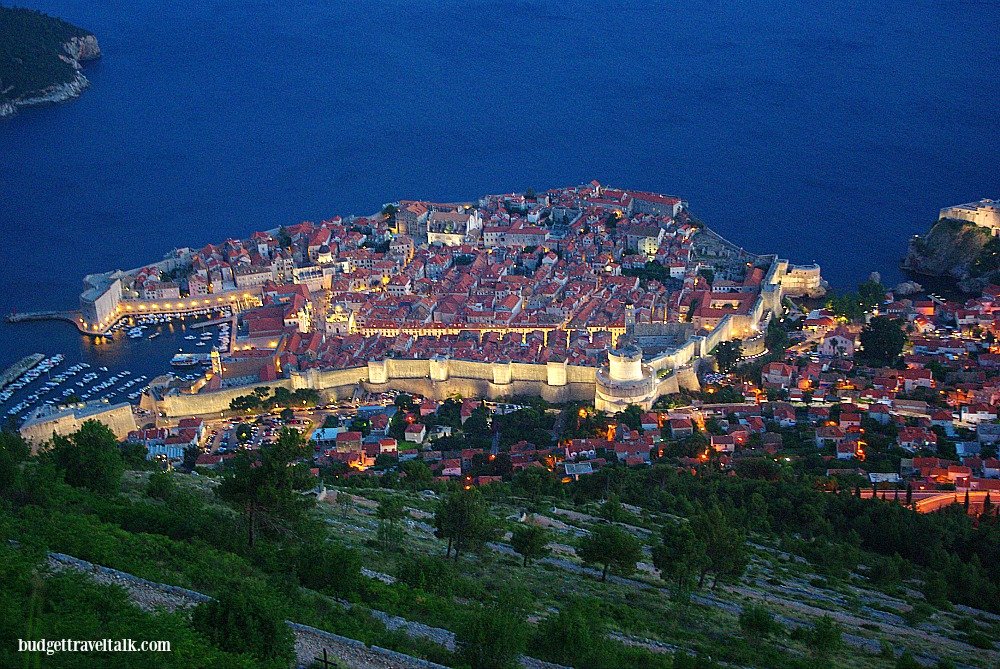 This post covers in detail how to catch the Cable Car to Mt. Srd plus alternatives to the Cable Car. It also covers things to do on Mount Srd Dubrovnik including the best Dubrovnik Sunset.

Mount Srd Cable Car was built in 1969 but along with Dubrovnik old town was damaged by war in 1991. At that time it was the only Cable Car on the Adriatic Coast.

The Cable Car infrastructure was fully restored in 2010 and today it’s two bright orange coloured cars hold 32 passengers each. With the huge amount of visitors Dubrovnik draws, lines to board do get long, but as the ride is short, the line moves quickly.

The solution is to arrive early (it opens at 9 a.m.) or drive, walk, take a local bus or a tour to to the top of Mt. Srd. The cable car runs every half hour from 9 a.m. The final departure from the lower Dubrovnik terminal is half an hour before closing.

I don’t particularly enjoy cable car rides, but I found the Dubrovnik Cable Car doable. I sat down and focussed on the distance and passenger watched while Marty took photos. The 778 metre trip, terminal to terminal, takes less than four minutes so it’s quite achievable for vertigo sufferers. Like the other cable cars we’ve taken, this one automatically shuts down when winds are too strong, so that’s comforting.

We climbed stairs from the Stradun (main street of the old town) toward Buza Gate and found Cable Car signs to follow, but the Cable Car can also be reached by walking 10 minutes outside the walls from Ploce or Pile Gates.

If your cruise ship is docked at Gruz Port catch the No. 8 Bus. We stayed in Gruz and often caught the No. 8. bus. It’s a pleasant ride and runs frequently.

By Croatian Kuna or Credit Card.

If I were to hike Mount Srd I would choose the downhill option. While 405 metres doesn’t sound that high the equivalent of 1,352 feet sure does! Google Maps says the hike takes 38 minutes, but it would take me much longer.

The track starts as a dirt track through forest but on exiting the trees becomes gravel with small loose rocks underfoot. The trail switchbacks up the mountain with stations of the cross at each turn. With time, energy and a strict budget, the Dubrovnik hiking trail to Mt. Srd would be a perfect choice.

Wear shoes with grip and take drinking water. I choose to wear a hat and use walking sticks and take my phone for photographs.

Remember: If visiting Mt. Srd for a Dubrovnik sunset the Dubrovnik cable car hike downhill might not be a suitable.

The two most famous Dubrovnik hiking trails are this one to the summit of Mount Srd and another at the summit. Referred to as the Imperial Fort hike (because it starts behind the fort) it continues for 1300 metres to Mt. Strinčjera. The trail stays at around 400 m in height though and is partially forested with some farm views and many Dubrovnik City and island views. 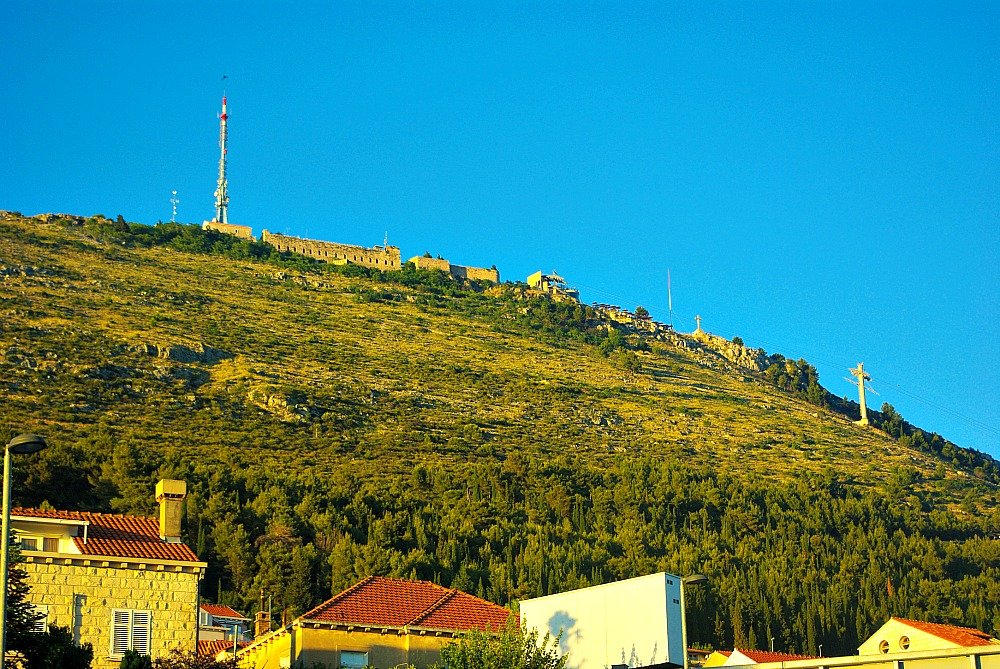 Mount Srd is a theatrical backdrop for grand dame Dubrovnik. To my English speaking self, a name that consists of only three consonants, is theatre in itself.

Dubrovnik Cable Car connects the old city with the summit of Mt. Srd, as does a walking track and road. 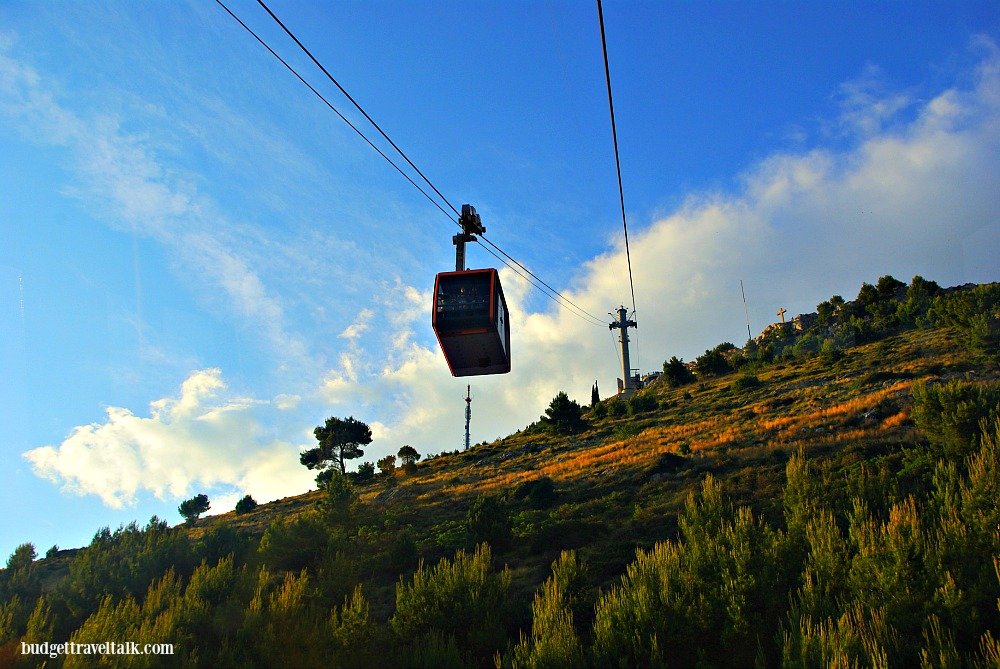 Catch a Local Bus as an alternative to the Mount Srd Cable Car.

Take Bus #17 from Pile Gate to Bosanka, a mountain town not far from the summit. This is a budget option and the views are good. From Bosanka, it is a short uphill walk to the summit. Sit on the right of the bus as it climbs the mountain for the best views. See the timetable from Bosanka here.

Located right there at the Cable Car terminus on Mt. Srd, Panorama Restaurant has one of the best views over Dubrovnik, the other being from above the Homeland War Museum. 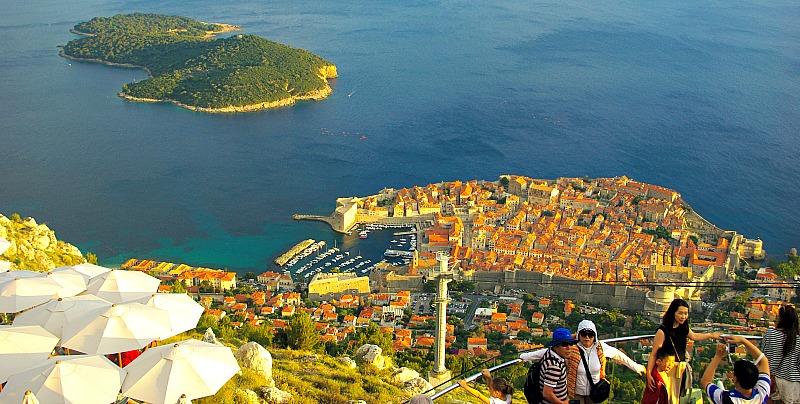 View back to the cable car terminal with restaurant and souvenir shop. 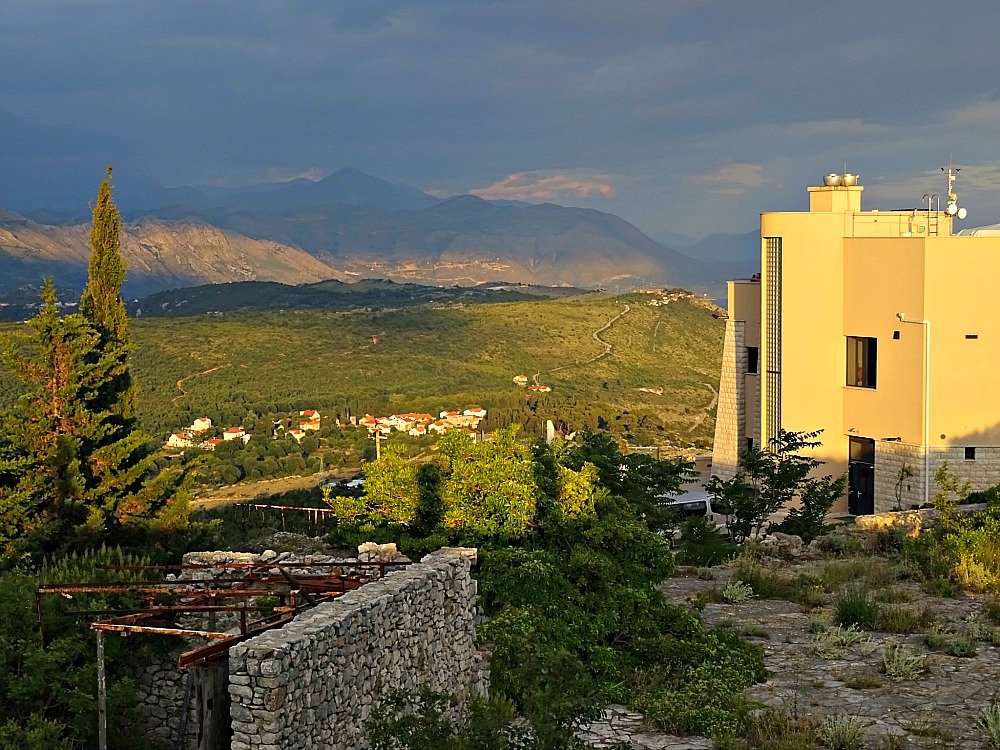 Views from the Rooftop of the Homeland War Museum

Mount Srd Dubrovnik may not be extremely high, but from it’s summit the views of Dubrovnik and the Adriatic are extensive. If anything those views are more impressive for their closeness. After a few snatched shots from Dubrovnik cable car terminal, we sprinted to the Homeland War Museum on the ground floor of the Imperial Fort not far from the cable car terminal.

Reach the Rooftop from inside the Museum

Once inside the museum take the stairs directly to the rooftop if the sun is close to setting. The view from the rooftop is a Dubrovnik must see and you can visit the Museum afterward. 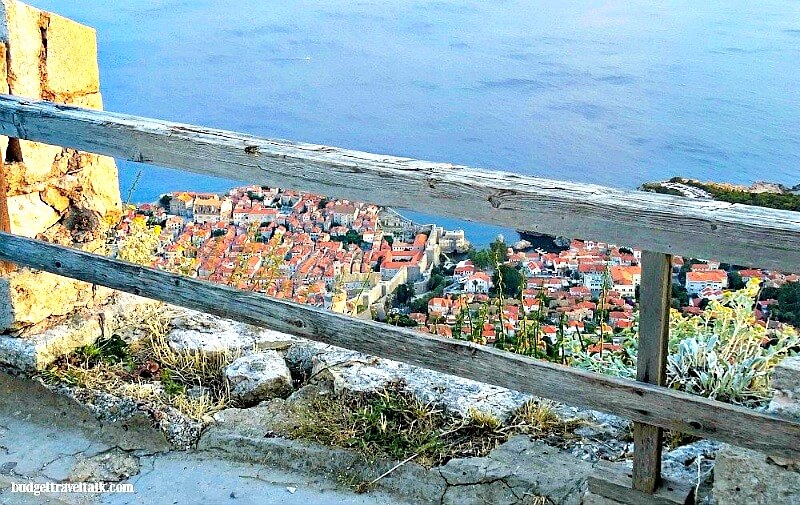 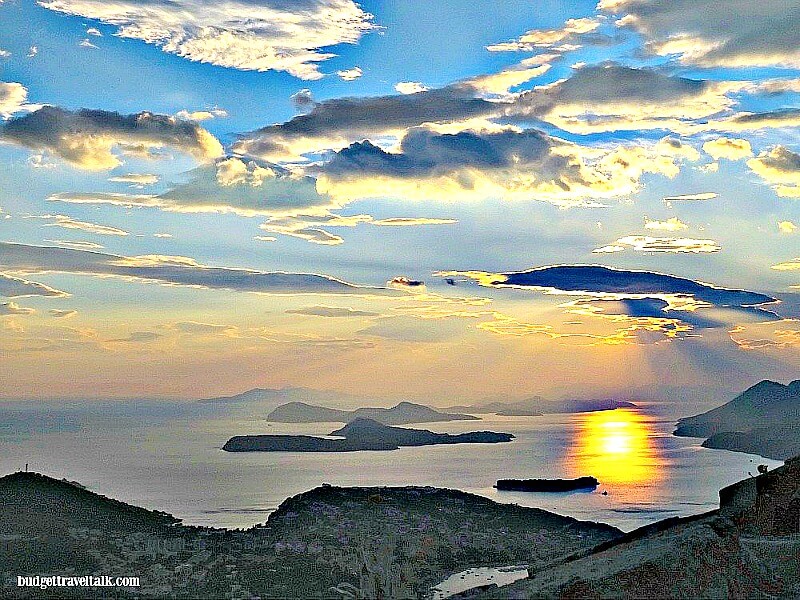 A fitting structure to find atop the Homeland War Museum rooftop terrace. 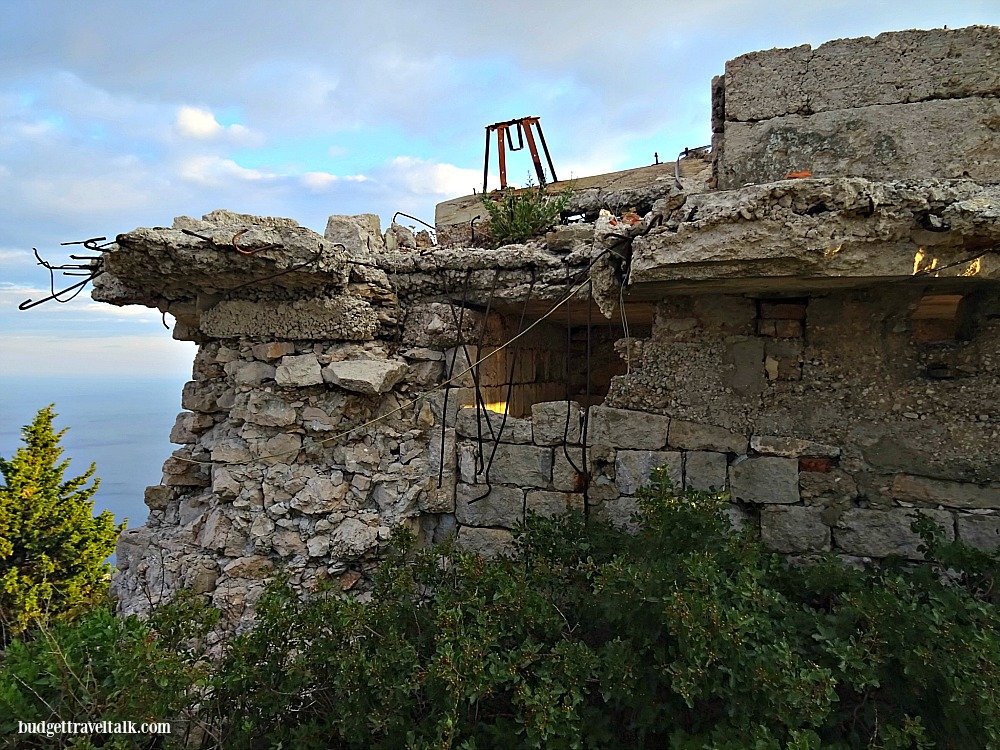 Looking at the below photo, I long to explore those islands.

Three of the Elpahite Islands, namely Kolocep, Sipan and Lopud can be visited by boat from Dubrovnik.

The tour takes in the orange and lemon groves of Kolocep, with views of the island’s extensive pine forests and medieval chapel of St. Anton.

On the other hand, picturesque Sipan offers delightful 15th century houses, churches and coastal paths bordered by fig/citrus trees and a marina.

The calm waters at Sunj Beach on Lopud Island is the perfect spot for a relaxing swim after a lunch of Croatian food and wine on the boat.

At $61 AUD this trip sounds is a bargain and I certainly wish we had taken it. If you are in the planning stages of your trip – lock it in.

Another view of a Dubrovnik Sunset overlooking the Elaphite Islands. 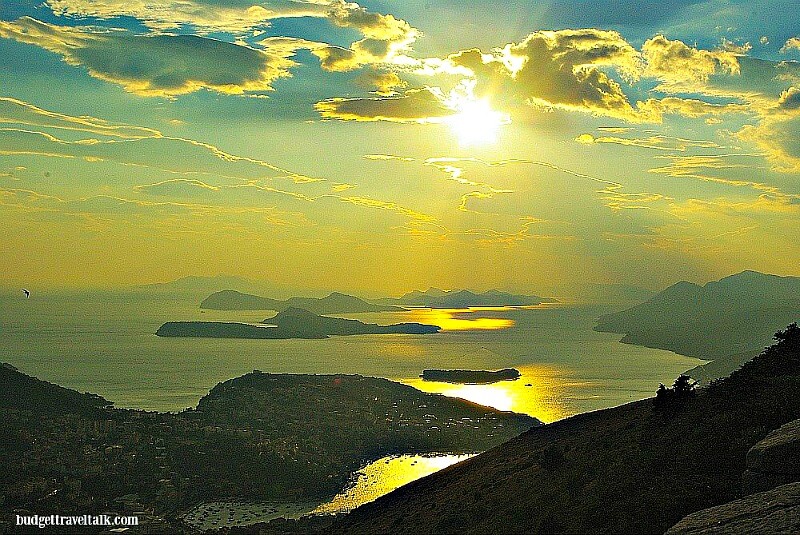 Mountains behind Mt. Srd catch the last of the setting sun. 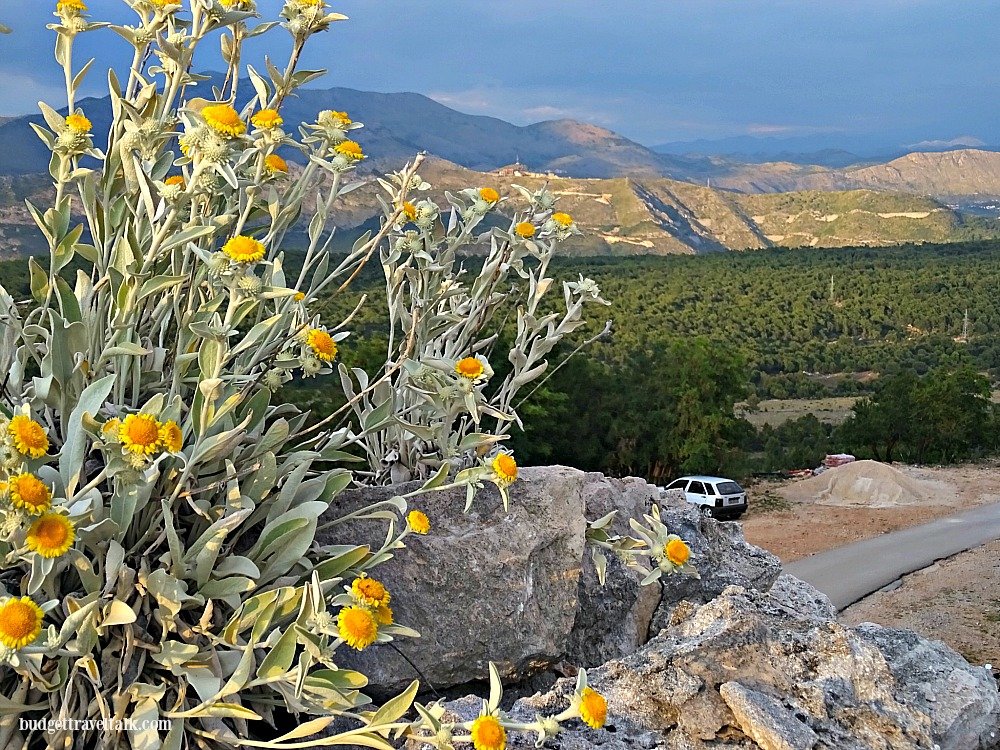 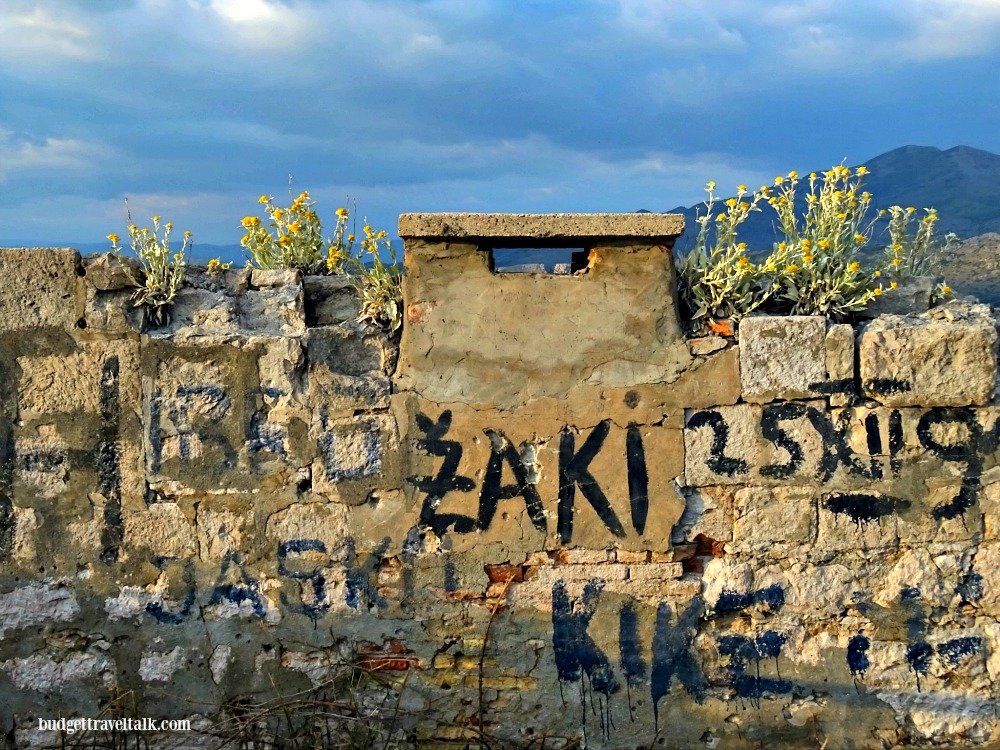 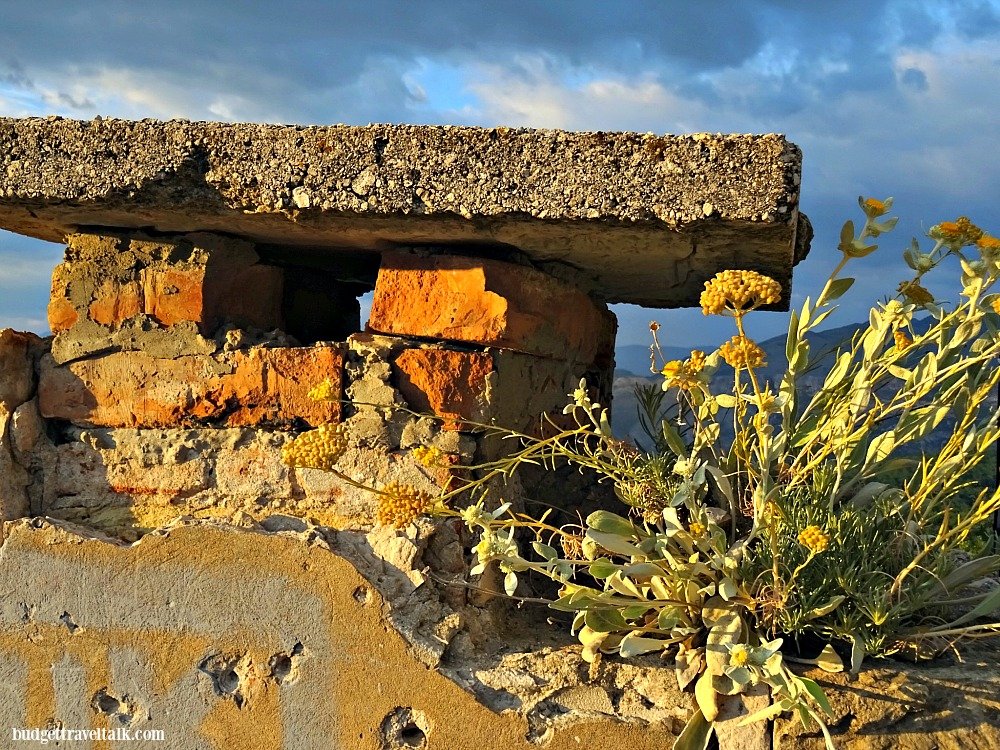 With the sun departed, depart the chilly rooftop for the amazing Museum below. 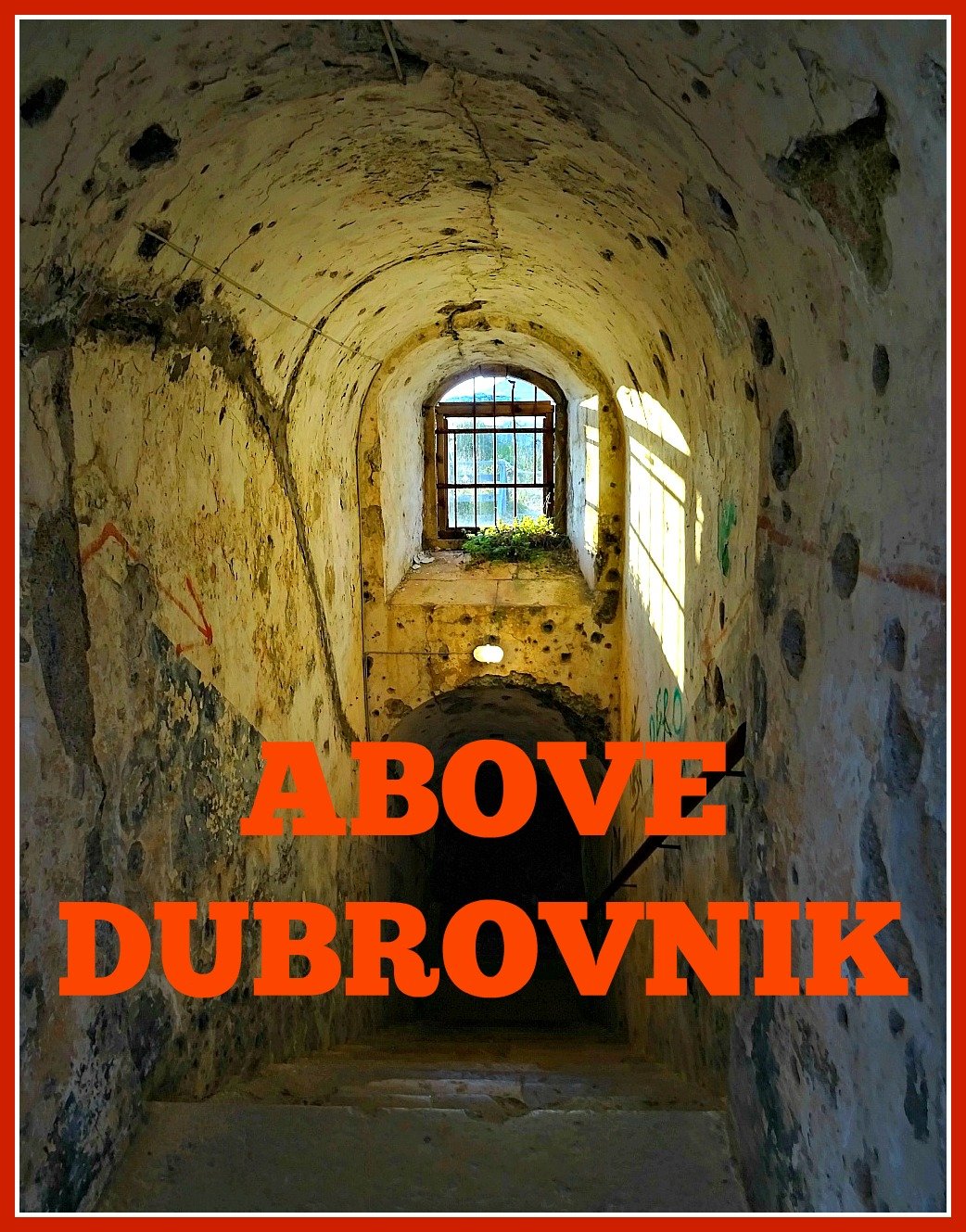 Dubrovnik War Museum located in the Imperial Fort (built by Napoleon Bonaparte in 1806) tells the story of the conflict years 1991 to 1995, the fort itself, the Montenegrin-Serbian offensive and subsequent liberation by the Croatian Army. You will hear this referred to as the Croatian War of Independence, the Homeland Wars or the Siege of Dubrovnik.

What an inspired building to house a war museum. The Imperial Fort with it’s atmospheric igloo shaped rooms and liberal coating of overhead moss, sets the scene perfectly.

A long connecting corridor runs down the side of one of the best war museums I’ve encountered – not that I’m an expert.

What I liked most was the building itself and the compelling real war footage of the bombing of Dubrovnik. If you don’t look at anything else look at this.

The fact that the war was a mere 25 years ago makes it doubly shocking. 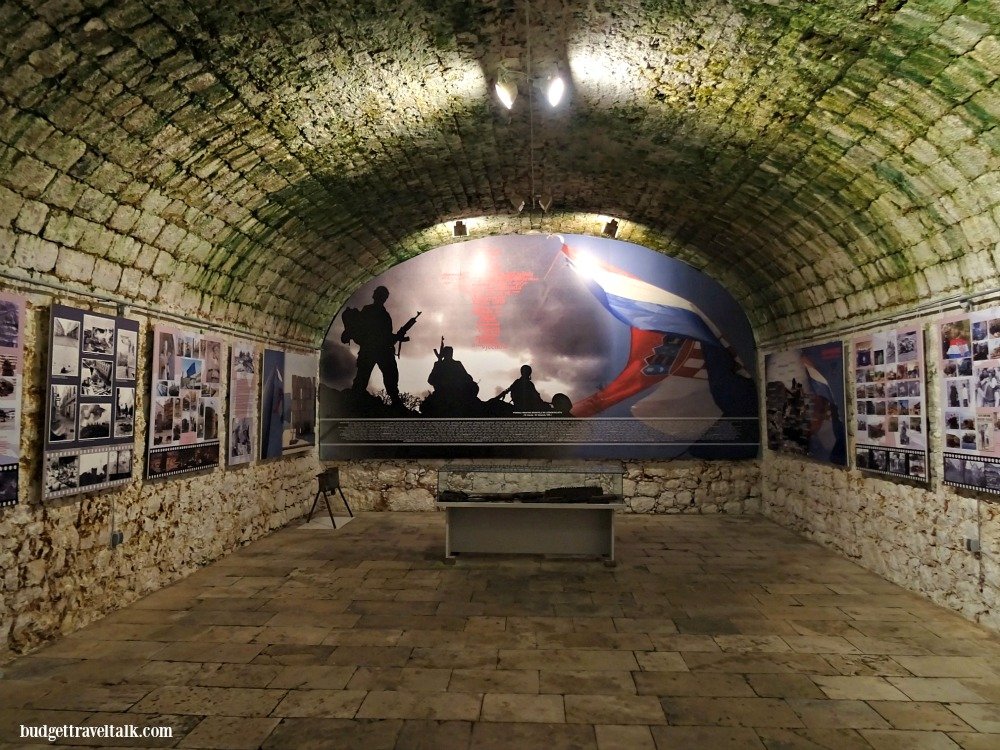 Two seats from which to view the war film footage. We sat in those chairs. 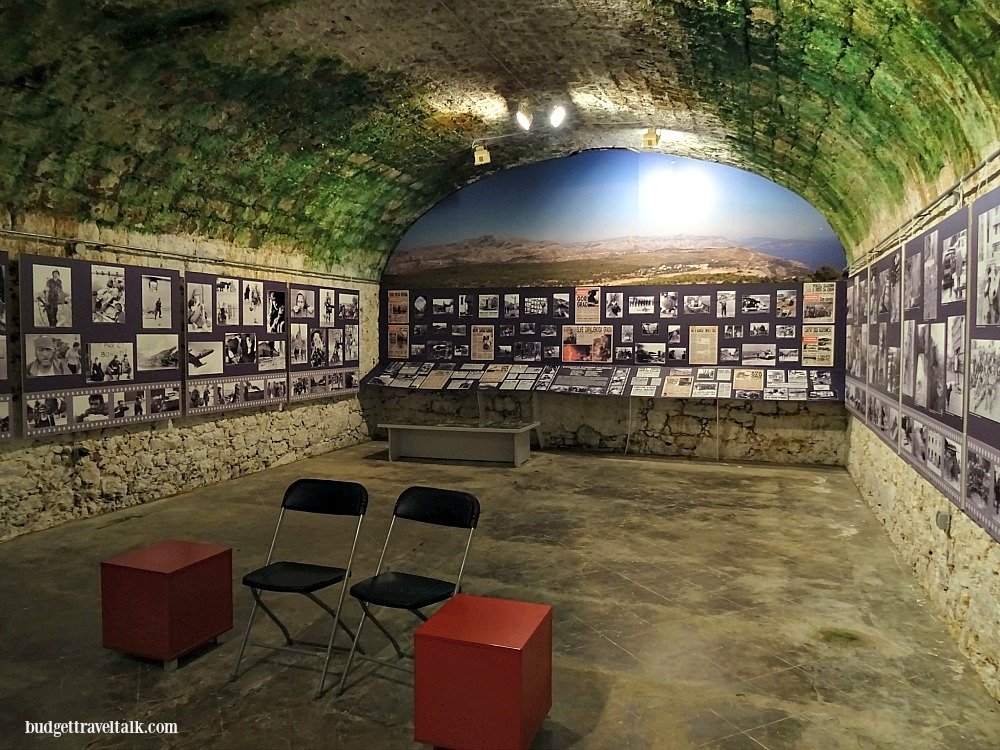 Things to Know about the Homeland War Museum.

1     If it is cool at night in Dubrovnik it will be more so on the terrace above the War Museum on Mt. Srd.

2     Compare opening hours of the museum with sunset times and allow enough time to get in position.

3     Allow time to visit the museum before or after taking photos from the rooftop.

4     There are no amenities at the Museum but you can use those in the terminal. 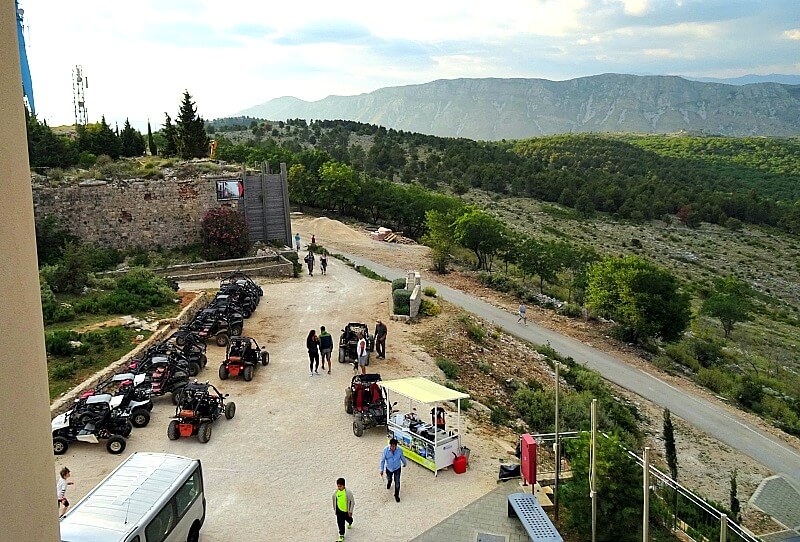 One hour long Buggy Safaris leave from behind the the upper Cable Car Terminal on the hour from 9 a.m. to 7 p.m. The guided safaris take in minefields and fortresses and drive through interesting terrain with fantastic views. Keep in mind that you will be a passenger in the 4-wheeler Dune Buggies, not the driver.

Wondering where to stay in Dubrovnik? We talk about that here. 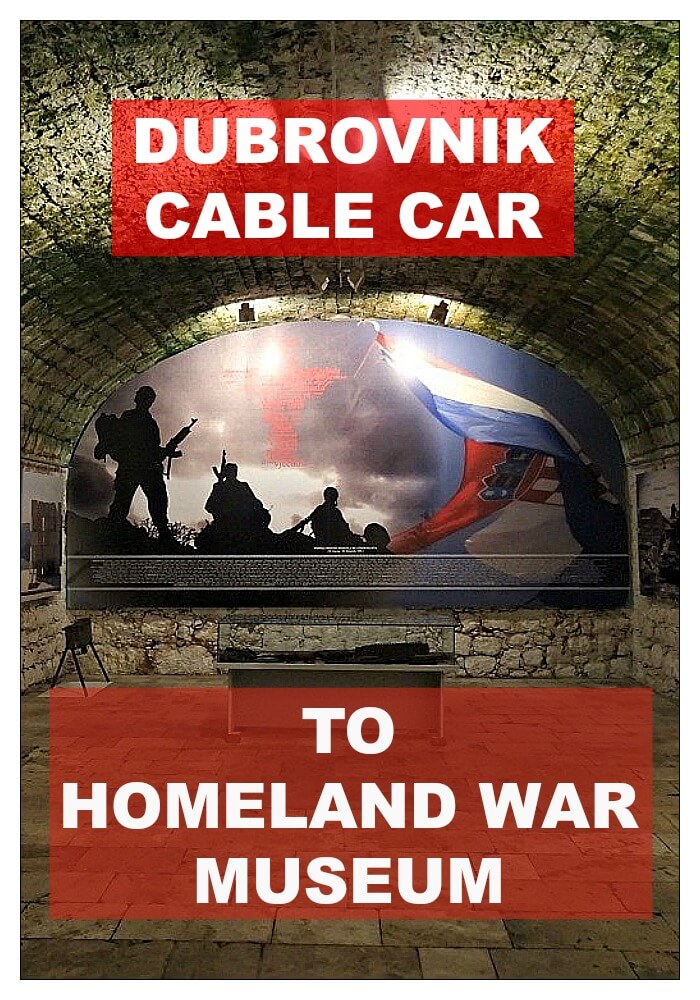 STOP PRESS:  Dubrovnik Cable Car might be closing down.

I was shocked to discover this headline recently. Evidently Dubrovnik Authorities are in dispute with the cable car operators and if it is not resolved the cable car could close. I hope an agreement can be reached.

It is possible to drive to the top of Mount Srd, but driving in Dubrovnik generally and on this dubious road is not a good idea. We handed our hire car back on arrival in Dubrovnik and were happy with our decision.

It takes less than 4 minutes to reach the summit in the Dubrovnik Gondola.

There are solar benches at the Summit Terminal where you can sit and recharge devices.

The Summit Terminal has a gift shop, Orhid pearl shop and blacksmith shop selling replica Ragua Perpera, a coin from the days when Dubrovnik was the Republic of Ragusa.

The Cable Car does not operate in February.

In 1969 when the Cable Car was established, it was the only one in the Adriatic zone.

Both Terminals have restrooms.

The Terminal on Mt. Srd has binocular telescopes set up over three terraces.

There is a 120 person open air amphitheatre at the summit of Mt. Srd (available for hire).

Kuranda Train and Skyrail the best day trip from Cairns
Next Post: What to do in Dubrovnik with best Game of Thrones Tour Guide