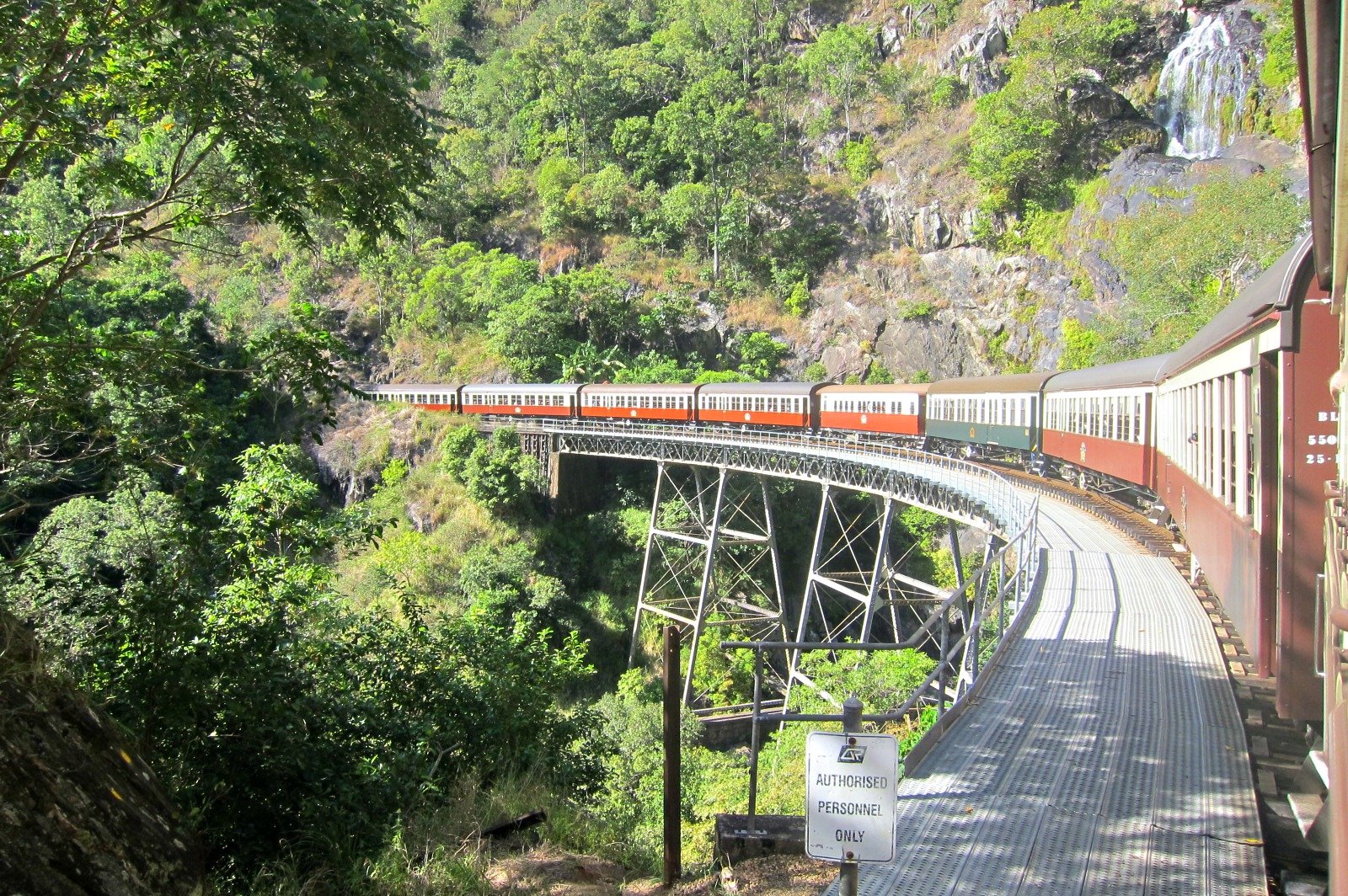 CAIRNS  some 1750 km north of Brisbane is the go to city for visitors to the tropical north of Queensland.  If you travel by road from the south, the climatic transition will be a gradual one, but with the relatively cheap airfares available today, flying is a much simpler and time effective way to arrive.  Just imagine stepping from the cool interior of your aircraft, to have a wave of heat and humidity wash over you.  Gotta love/hate that.

I really should have been photographing Caravonica Skyrail Station which was quite impressive, but I was fascinated by this huge spider web in the car park garden. I mean it was so MASSIVE it nearly blocked out the sun. 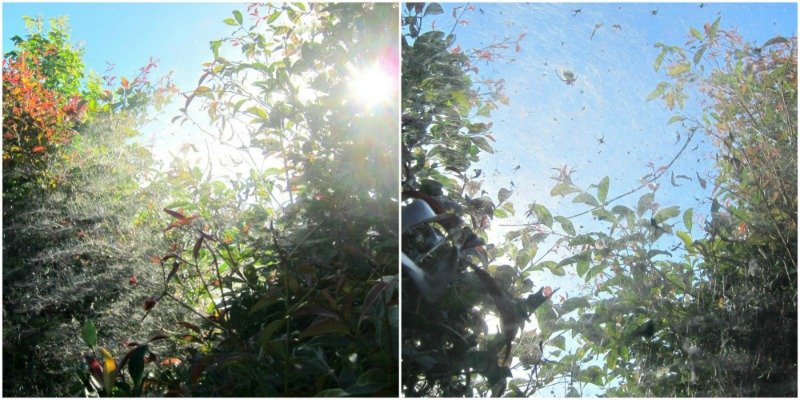 Last week-end we drove the 350 km north from Townsville to spend the balance of a $500 Go Do prize, due to expire in October when we will be in Turkey.  We deliberated over (scary)zip lining, (chilly)snorkelling and (exciting)crocodile spotting, but finally decided on a day trip from Cairns to Kuranda, on the Atherton Tableland, by train and return by Skyrail.  It was 35 years since I had ridden the Kuranda train and B.H. had never done so – a situation which needed addressing.

As part of our SELF DRIVE, TRAIN & SKYRAIL experience, we parked our vehicle at the Skyrail station at Caravonica, about 15 minutes north of Cairns CBD, where we were to be collected by International Coaches and Tours (the service provider) for transfer to Freshwater Train Station.  Their pick-ups from Skyrail were at 8.20 a.m. and 9.20 a.m.  and we chose to get the day started early, arriving in time for the 8.20 a.m. pick-up.  Then when we returned on Skyrail that afternoon, our car would be there waiting for us.  Perfect. 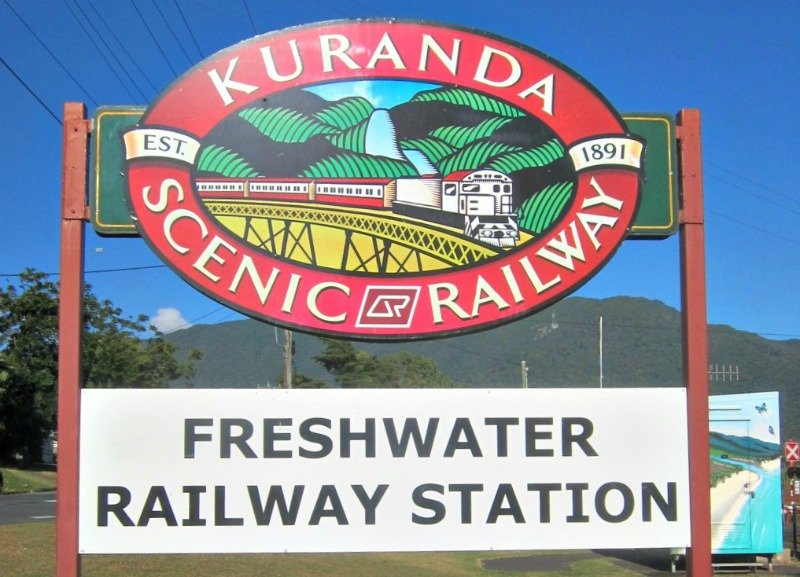 Skyrail  office did not open until 8.45 a.m. and there were lots of tourists milling around out the front.  I had phoned the always helpful GoDo people before I booked the experience online, and they explained how the deal worked.  Then on the day I phoned the service provider who told us the exact pick up point at the undercover area at the front of the Skyrail terminal.  It appeared that several companies operate the same deal and other tourists waiting with us, who had not booked through GoDo, were collected at different times.  There was a general air of confusion and I think a sign saying “Wait for your Freshwater Station Transfer Here” would be a great idea. 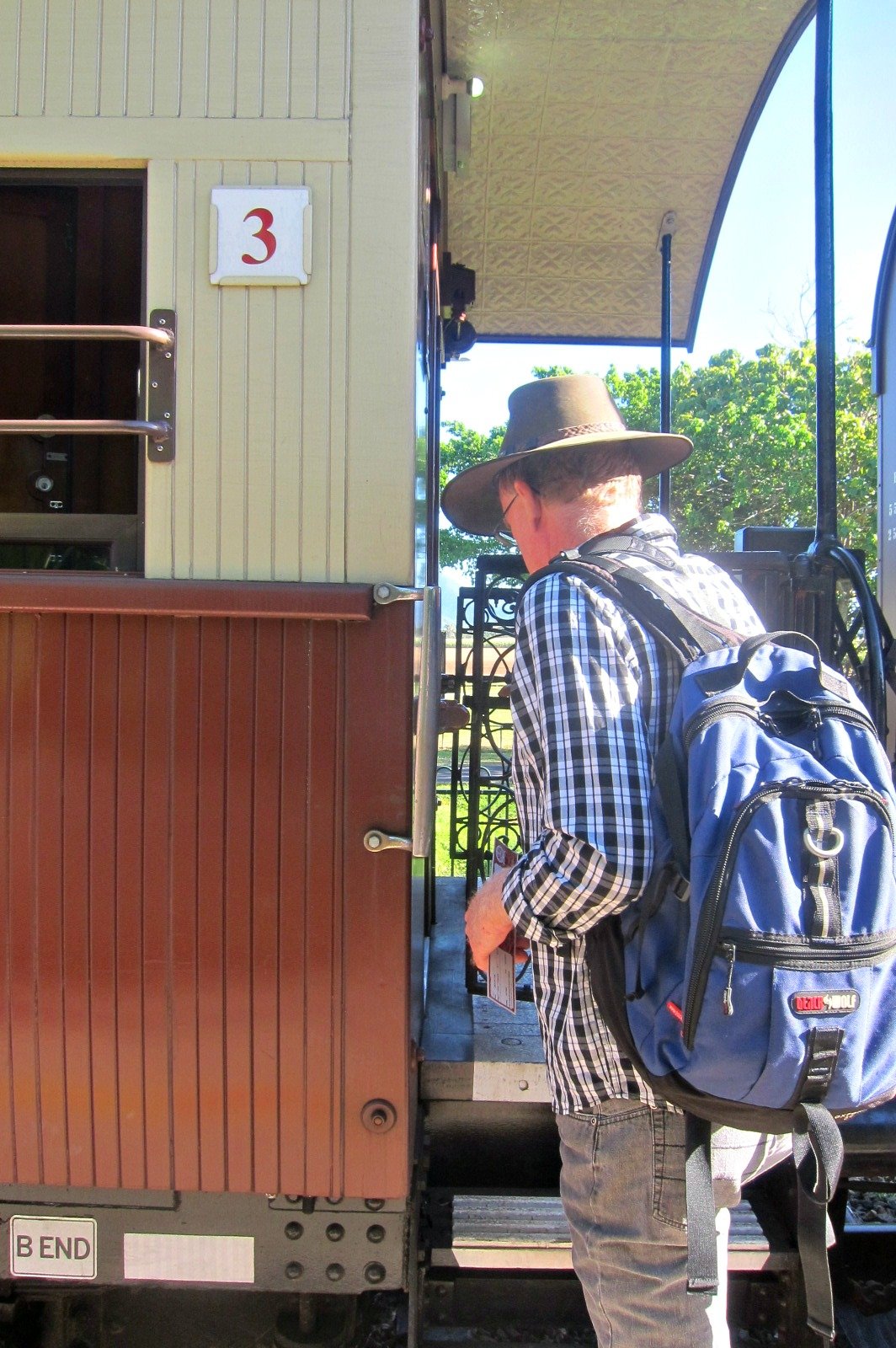 On arrival at Freshwater Station our driver located some passengers who were on his pick up list at Skyrail but had parked at Freshwater in error, gave us all a rundown on the train journey and where and how to catch the Skyrail back down.  Swapping our vouchers for tickets we clambered on board as the whistle sounded dead on 8.45 a.m. 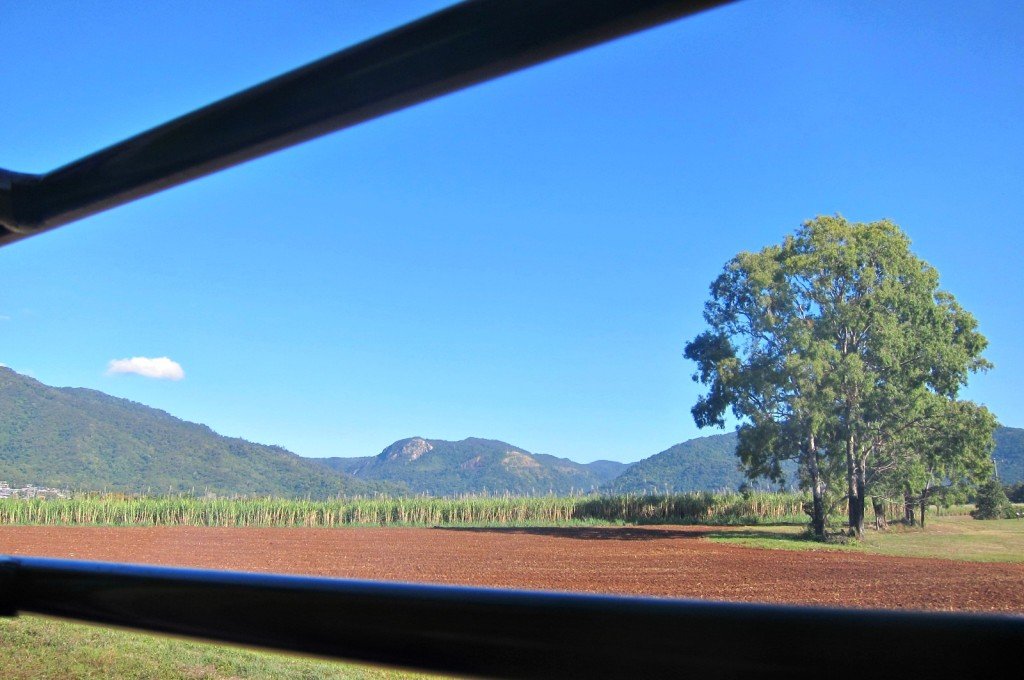 Hostesses roamed the corridors of the authentic timber carriages offering to take our photograph with our own camera, there were water coolers and toilets at the end of each carriage and with the windows wide open, the smells of cane fields and rainforest wafted in.  I laughed when I found myself humming Morning Town Ride, an iconic (old) Aussie song about another train ride, as we trundled through the cane fields into the foothills of the Macalister Range.  It is funny how our minds find a suitable sound track isn’t it?

There are 15 tunnels in all on the 37 km of track to Kuranda township, the longest being 490 metres and they were all dug using hand picks.  At Tunnel 6 in 1973 masked bandits held up a train carrying wages to the Atherton Tablelands.  They escaped on trail bikes and were never apprehended.

Mango trees in flower through the windows. 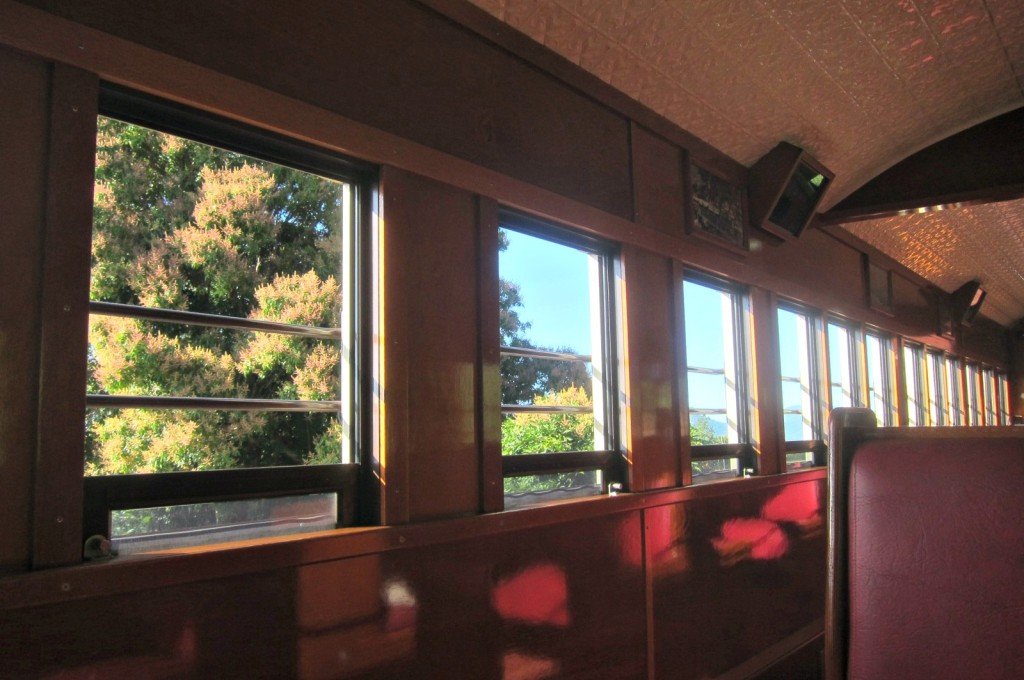 Can you spot the Stoney Creek Waterfall? 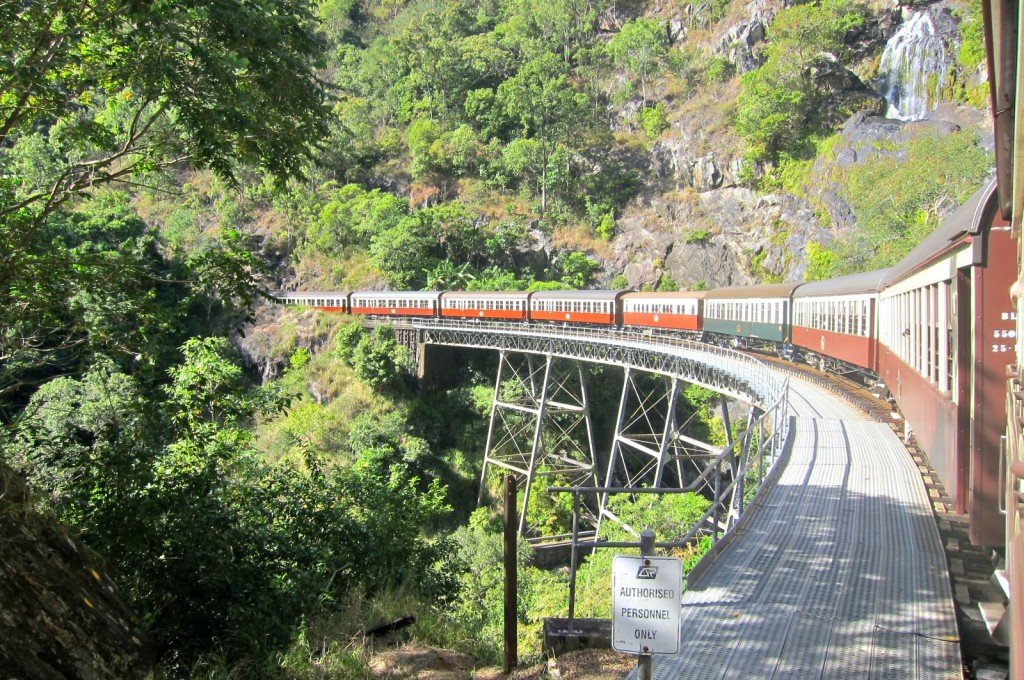 Views down the valley to the Coral Sea. 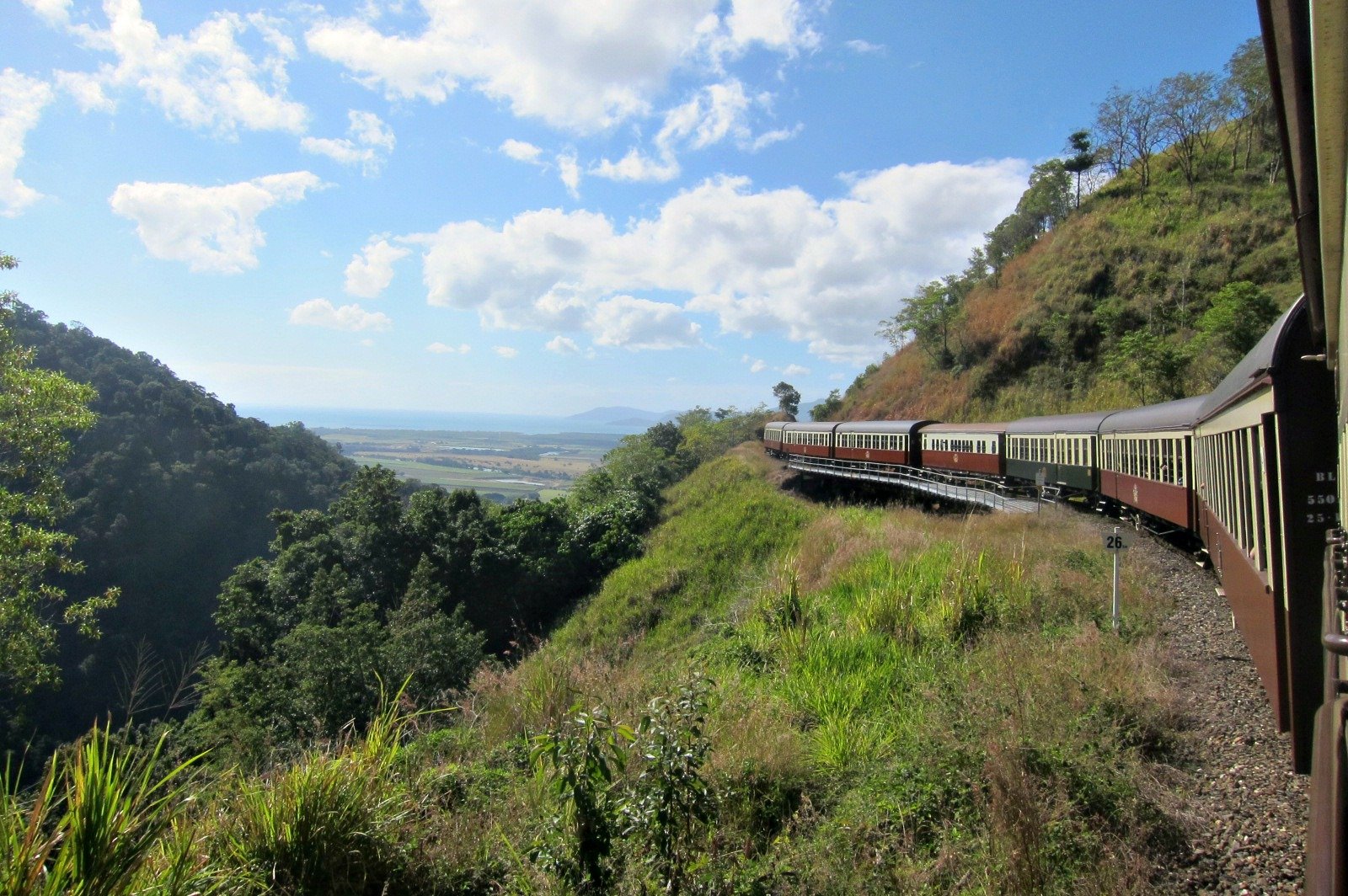 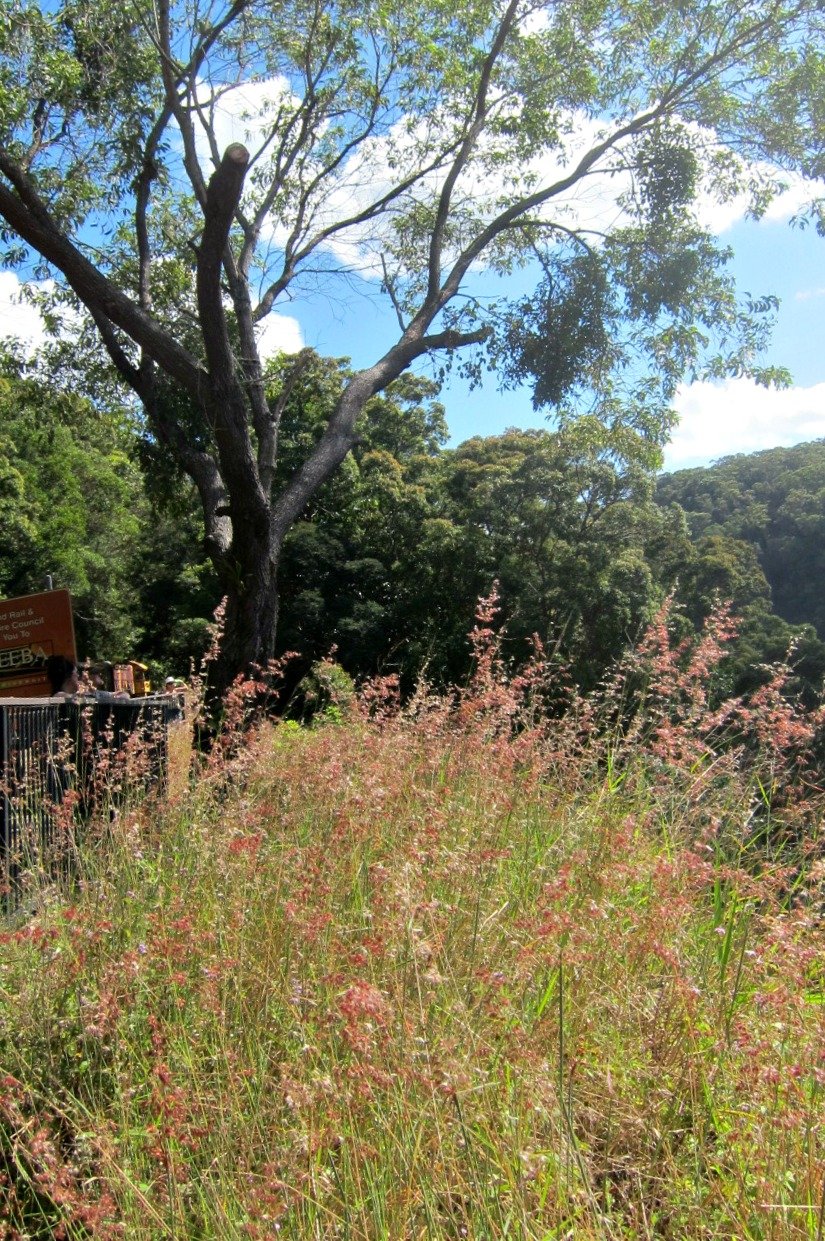 A section of the Barron Falls.  Water flow over the falls has been restricted by a hydro-electric power plant since 1963, but the first plant was built here in 1935. 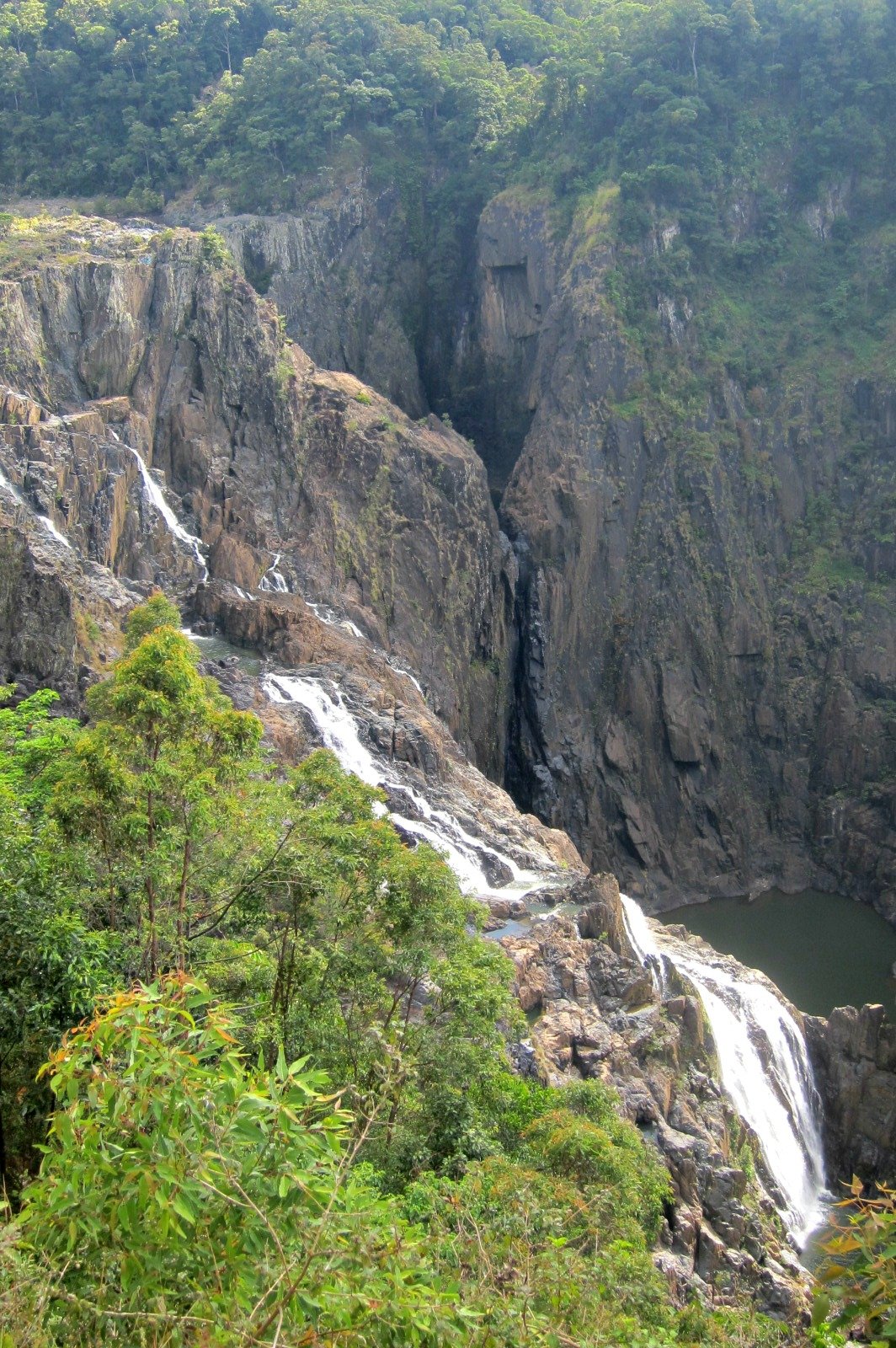 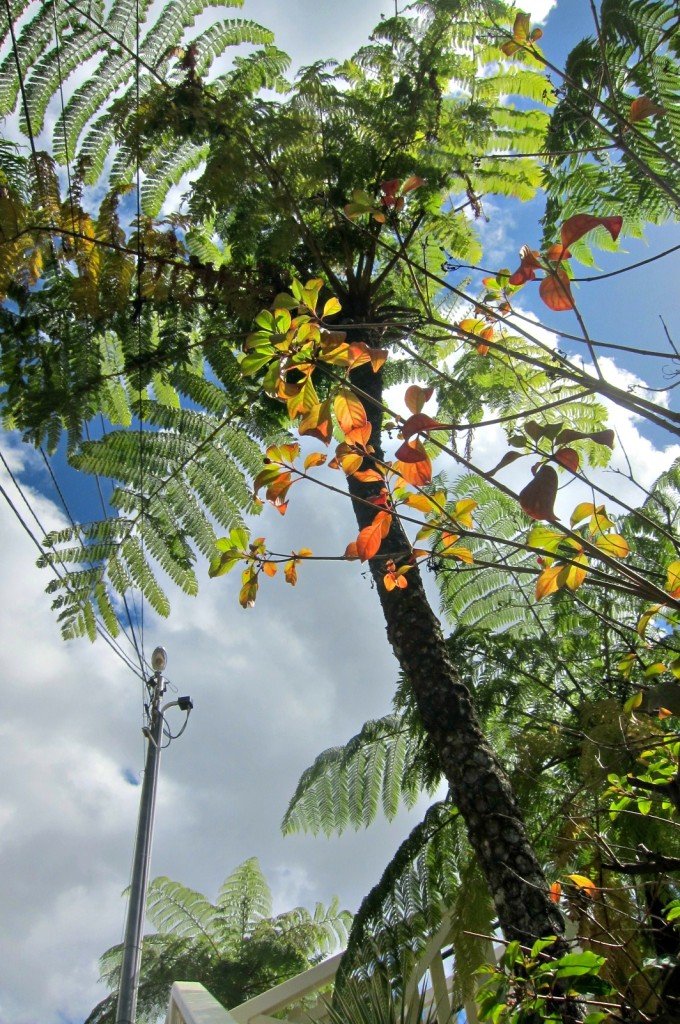 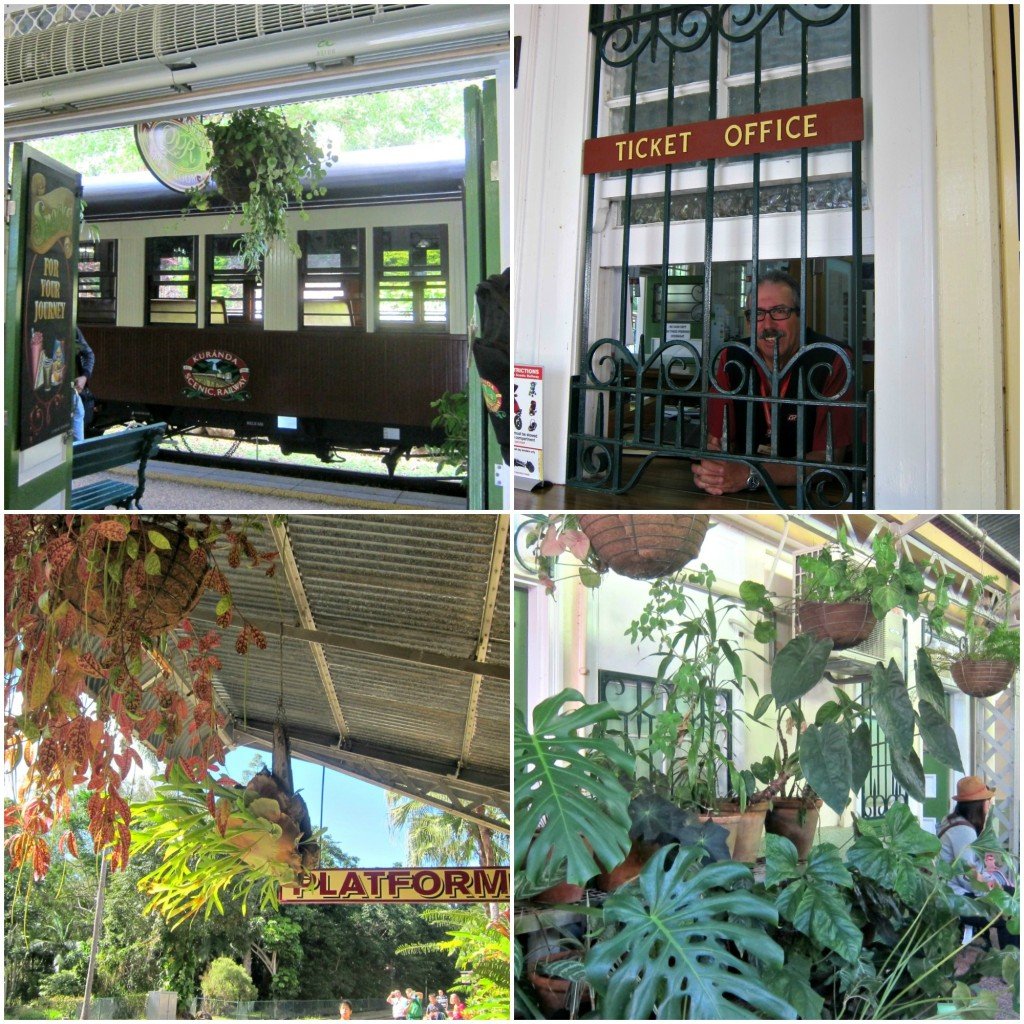 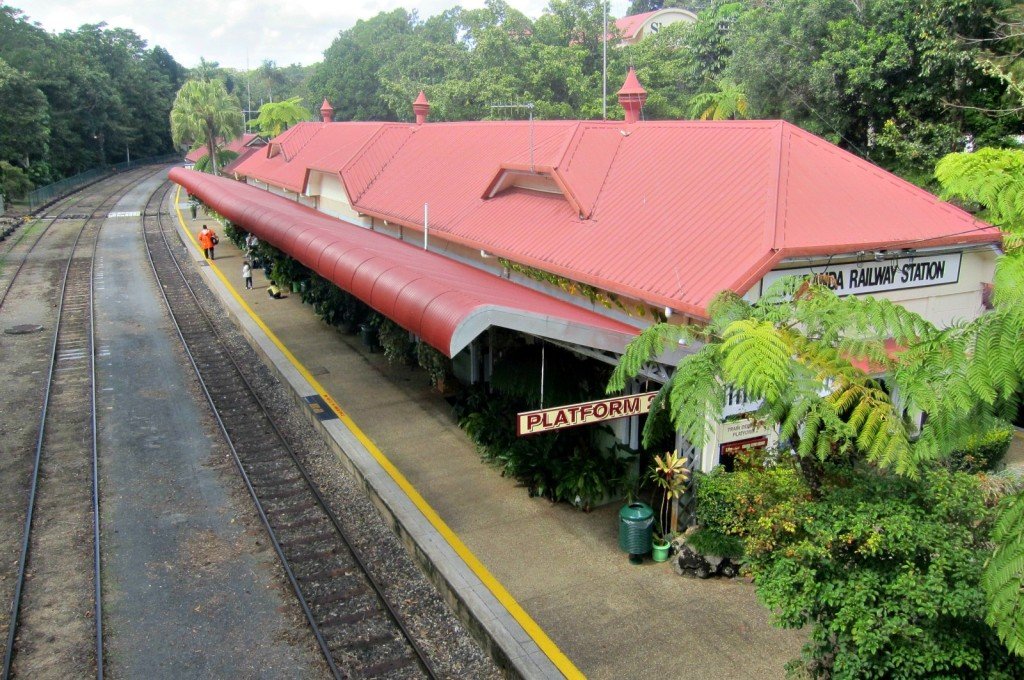 Kuranda Train Station is a destination in itself with a great display of tropical plants in hanging pots, tubs and gardens.  We ordered Devonshire teas for two and adjourned track-side to soak up the atmosphere.  Disappointingly amidst all this old fashioned splendour (the line opened in 1891), our coffees were served in disposable cups and the scones in plastic containers, however they did have lots of strawberry jam and a nice dollop of cream on top.  The Devonshire Teas were $7 each with an added charge of $1 for coffee.

Afterwards we set off on a 760 metre stroll beneath the tall paperbark trees beside the Barron River.  That was all I envisaged doing, but B.H. sneakily added on the Jungle Walk (900m) and the Jum Rum Walk, a 1.4km boardwalk that leads up to the township.  I might add that all three walks were beautiful – and here’s the proof!

See what Nancie has been up to in Seoul over at BUDGET TRAVELERS SANDBOX FOR TRAVEL PHOTO THURSDAY.

Click here to get your first time airbnb user discount!

Where to Find the Best Australian Sunsets

Budget Kyoto and The Bamboo Forest at Arashiyama