Updated August 2021. This post shares the different ways to visit Bisevo Blue Cave Croatia both from Vis Island and on a day tour from Split.

One way is to hire a boat from Vis. Having owned a string of boats over the years and both holding boat licences, this is what we did. We loved that we could commune with Mother Nature in deserted bays, swimming wherever we chose. It may be an option for you too. Hiring a boat is an expensive option, but having said that, by staying at Airbnb’s and budget rooms or house-sitting and self catering, our budget allowed it.

An underwater rock ledge is clearly visible from above in Bisevo Blue Cave Croatia. 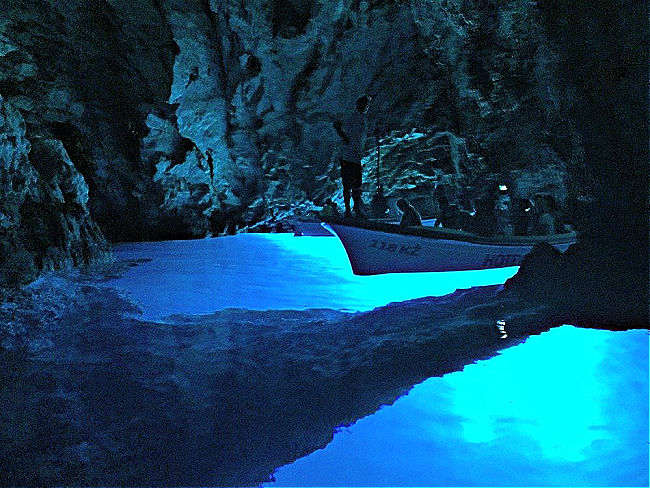 The first thing to know is that swimming is not allowed in the Cave.

Some Split Locals suggested it was possible if we arrived independently as opposed to by tour.  This may have been correct at one time, but not now.

Cameras monitor the entrance with a boat and rope physically blocking it.  It would be dangerous swimming in the cave with the amount of boat traffic it gets.  Our boatman quoted figures of 1500 visitors in one day.

The cave at 24 metres long feels very intimate, and while the water is 10 to 12 metres deep, the bottom and fish are clearly visible.

The cave is a natural phenomenon formed by wave action eroding limestone. 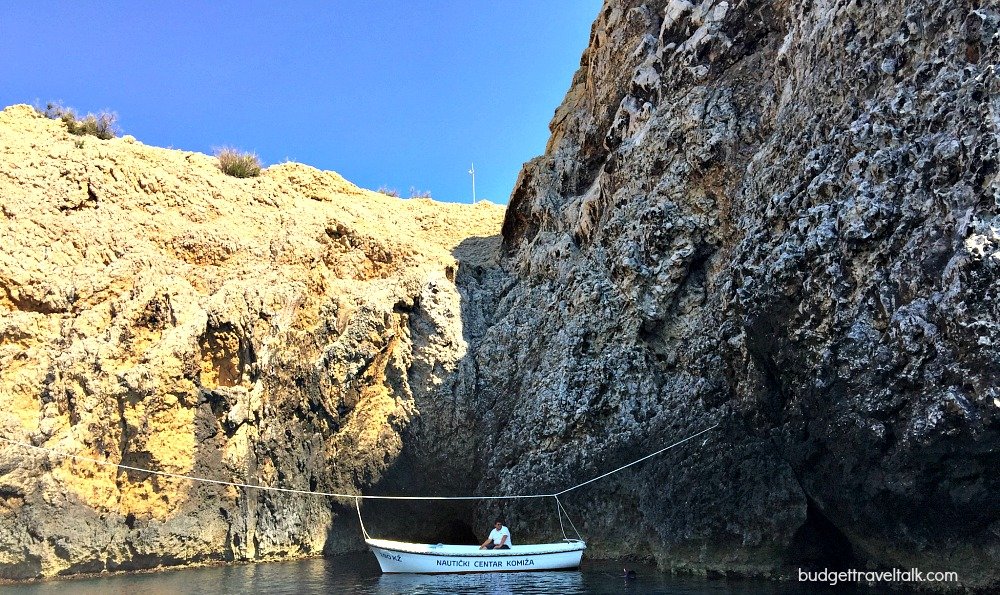 Is the water blue outside the Blue Cave?

Yes the water is blue outside the Cave, but it is not as stunningly iridescent as within the cave.

This photo shows the water outside the Blue Cave Bisevo.

We suggest paying to visit inside the cave, it truly is worth it. Remember the best time is between 10 am and 2 pm. 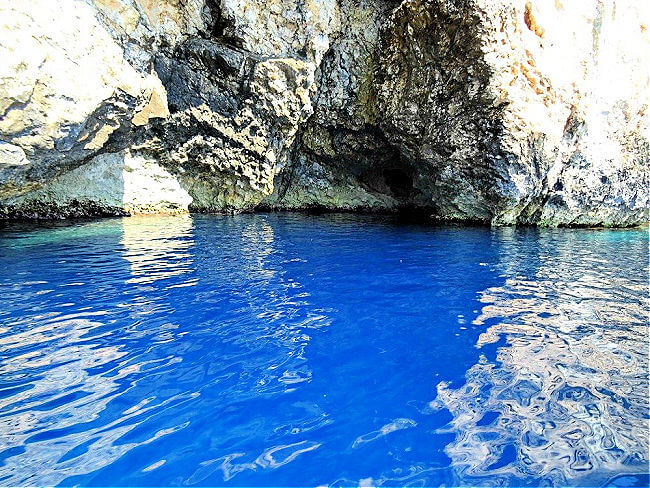 Why is the Blue Cave in Croatia blue?

Sunlight enters the cave from a hole in the cave roof and reflects off the white sand floor of the cave.

Is the Blue Cave in Croatia worth it?

Most definitely, especially if you have not been into a blue cave before. It was one of the most surreal experiences of my life, as strange as white snow on the black lava of Mt. Etna.

Where is the Blue Cave located?

The Croatian Blue Cave is on Bisevo Island 10km south-west of Komiza on Vis Island. There is another Blue Cave on the Isle of Capri in Italy.

Within the cave the water is Astoundingly, blindingly blue.

The cave tour itself is Time Efficient, Affordable and well Organised.

We arrived on the island at 10 a.m., moored at Biševo harbour and purchased tickets for the cave.  Our strategy of arriving before the first tour boats paid off and we were seated on the very next cave boat. Thirteen on our boat – a lucky 13!  The blue cave was situated around a small headland from the harbour and we arrived within 10 minutes.  Our boat waited outside the cave until another exited and then it was our turn. We ducked our heads to give the boatman a clear view of the small cave entrance but even with heads raised everything remained black and with the motor off all was quiet.   Water lapped gently, an occasional water droplet fell into the coolness and tension mounted.  We rounded a corner and an iridescent glow filled the cave.  It hit with an almost physical force.  Our guide quoted a few facts and figures that seemed superfluous and I tried to remember if standing was allowed.  I  stood and took several photos before sitting to enjoy the moment.

The thing to understand is that regardless of which tour delivers you to Bisevo Island, you will be transferred to the boats which leave from Bisevo Harbour and take you to the Blue Cave.

How do you get to the Blue Cave Croatia

1. Hire a boat from Vis Island and Drive it yourself.

Yes you can be your own Captain for the day. 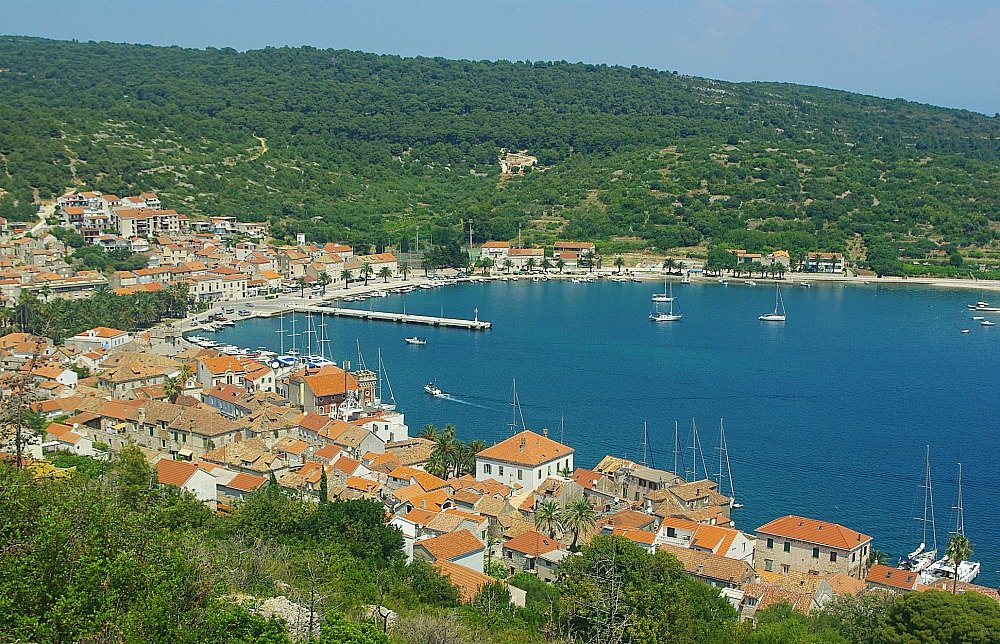 If you have a boat licence, are cashed up or have a few people to share the cost, this is a great option.

Komiža, a town on the west coast of Vis Island, was where we departed for our Bisevo Blue Cave trip. Having been directed to Blue Cave Tourist Agency, we hired an 18ft semi-rigid inflatable with a 130 h.p. outboard motor. It was ours from 8 a.m. until 8 p.m.

Read on for other options to visit the Bisevo Blue Cave on Bisevo Island. Remember, it doesn’t matter how you get to Bisevo Island because once there everyone enters and leaves the cave the same way.

Prices correct at time of publishing.

Are you up for a 10 hour Tour? If so this 5 island tour, departing from either Trogir or Split City on Mainland Croatia is great value.

This Blue Cave Tour from Split/Trogir scores 4.8 from a possible 5 from 286 reviews, which is very good. All these reviews are from people who have taken the tour. Having such a high score from so many reviews shows they are consistently good.

We recommend this tour for adventurous people who love a good time and going fast in a small speed boat as opposed to sailing or large ferry type boats. It is totally safe and lots of fun. Small boats are the way to explore to explore the Croatian Islands. Music is played on board to pass time in transit. Lifejackets are supplied as is snorkelling gear (for Budikovac Island). I like to take something warm for the way home although wind-cheaters are also provided.

This 5 island tour really ticks a lot of boxes. Hvar Island is Croatia’s premier island and is drop dead gorgeous, as is the Blue Cave. If the weather prohibits entering the Blue Cave the crew will find you a lovely deserted beach to swim at. These guys know all the best places.

If you are exhausted by the time you reach Hvar and don’t wish to climb to the fortress, we recommend settling in at one of the waterfront cafes. They are beautiful and a great place to people and boat watch. Watching boats arrive and depart in Croatia is always fun.

Islands visited are Hvar, Biševo, Vis, Ravnik and Budikovac. Most tourists don’t get to see (and swim and snorkel) at Budikovac so this is a big plus.

This tour is also great for people who are time poor as it really covers a lot in a short time frame.

I would not hesitate to take this tour. We have taken a very similar one from Airlie Beach in Queensland Australia.

Trogir or Split to Blue Cave is a breathtaking 90 minute speed boat ride direct to Bisevo Blue Cave. The Cave is the first stop.

Blue Cave Entry is included in this tour. 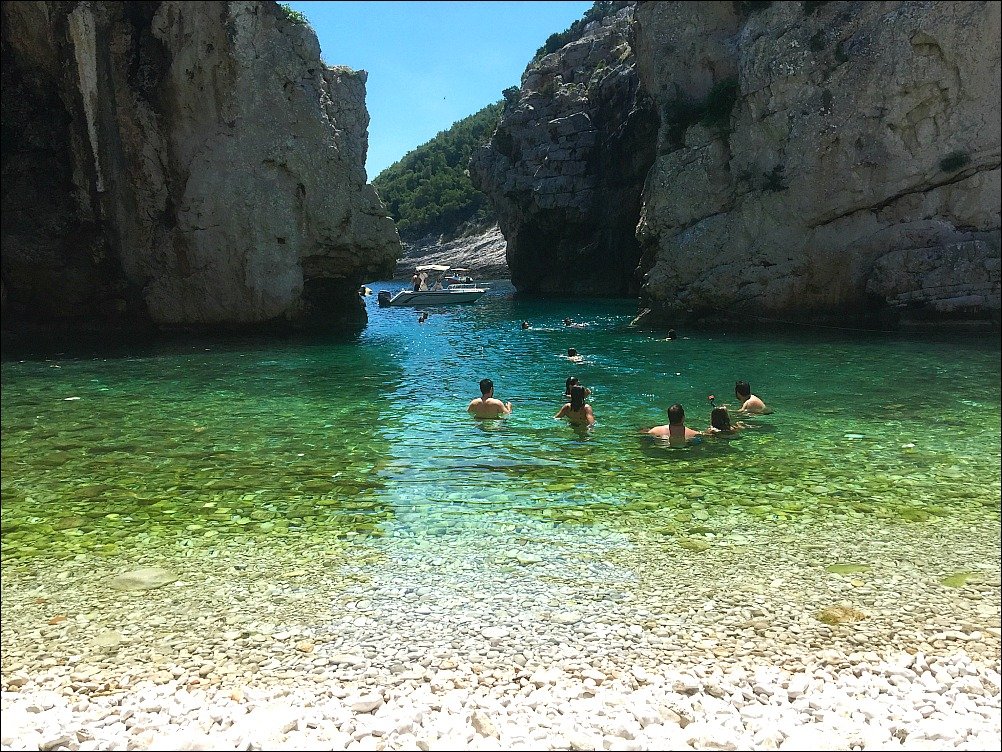 Have Lunch on the Riva at Hvar Island Croatia 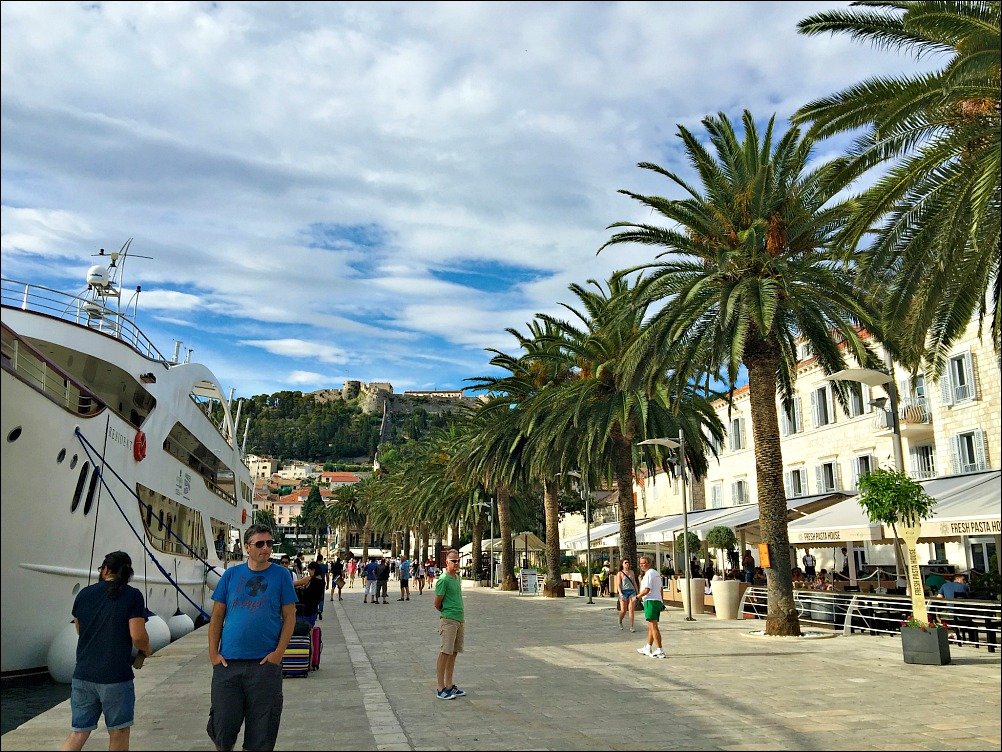 CLICK HERE TO BOOK THIS FABULOUS ADVENTURE FILLED TOUR FROM SPLIT OR TROGIR.

Departing from Hvar Waterfront a speedboat goes direct to:

Contact Blue Cave Tours in Komiza. They organize trips from Vis Island which include the cost of the Blue Cave Tour and preference in the line up for the cave tour. This is the perfect solution if you are staying on Vis Island and don’t wish to hire a boat yourself.

Read about the beaches of Split.

This post forms part of the Ten Weeks In Europe series.