What to do in Siem Reap?

The obvious answer to the question “what to do in Siem Reap” is to visit Angkor Wat. This monumental Wat is the largest religious structure in the world and is believed to be the earthly embodiment of Mt. Meru the home of the Hindu Gods.

Here is our Angkor Wat Guide.

As home to the Hindu Gods, Angkor Wat is as close as you can get to Heaven on Earth.

Tension builds dramatically when approaching Angkor Wat. Driving beside the impressive moat and walking along the lengthy causeway is an exciting precursor to what is without doubt a world renowned Act.

Prior to visiting Angkor Wat I had a lot of questions and I’ve listed them below with answers for your convenience.

It was built by the Khmer King Suryavarman II.

How Old is Angkor Wat?

How Big is Angkor Wat?

The Wat is a neat rectangle with an area of 500 acres and is the largest religious complex in the world. It is 213 metres high from ground level to the top of the central tower.

How far is Angkor Wat from Siem Reap?

It is about 6km north of Siem Reap and takes about 25 minutes in a tuk tuk.

How was Angkor Wat built?

It was made of sandstone blocks floated 50km downstream from holy Phnom Kulen. Inscriptions tell that 300,000 workers and 6000 elephants were used in the construction of the wat.

The Angkor Wat religion was originally Hindu but is now – like 95% of Cambodians – Buddhist. What I find endearing about this change of faith is that nothing physically changed. Even though the scenes of the Hindu Stories carved into the walls of the temple depict and glorify killing (abhorred by Buddhists) they were left intact. There are only a few buddhist statues and images in the complex, but only because most in the Gallery of the Thousand Buddhas were destroyed in the 1975-79 war.

Now that is a moat. 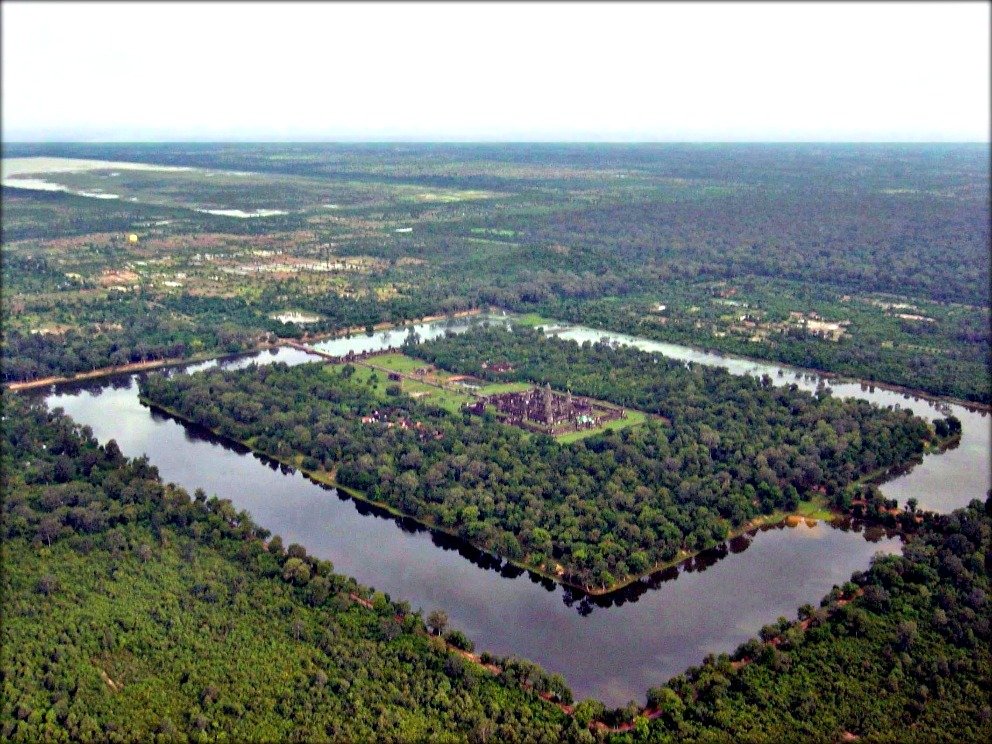 “Angkor-Wat-from-the-air” by Charles J Sharp – Taken from helicopter flying over Angkor Wat. Licensed under CC BY 2.5 via Wikimedia Commons.

In the photo below the Angkor Wat moat looks like a river, but the photo was taken looking across the moat toward Angkor Wat. The moat has a perimeter of 5.5 km.

At our feet wild monkeys foraged for food in the late afternoon. 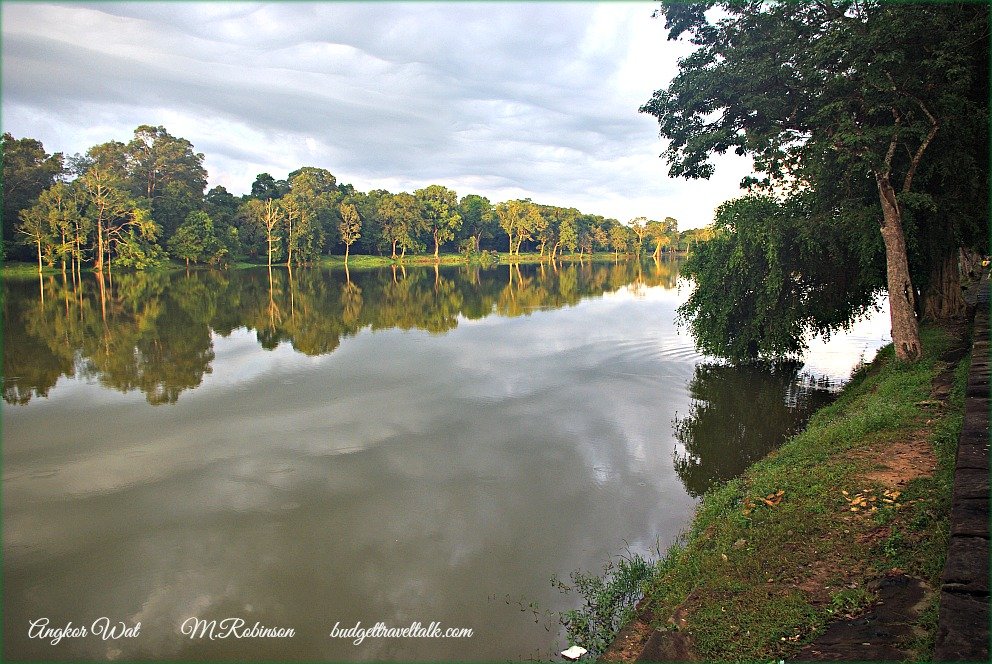 Like Siem Reap weather, Angkor Wat weather is hot and sticky. November to February is peak season. The weather is drier and cooler (25 to 20 degrees C). March to May expect 40 degrees. June to October is rainy season and roads are muddy but it only usually rains in the afternoon.

The dreamy appeal of the moat is abandoned at the main Western Entrance where it adopts a business like attitude to cater for the two million visitors it welcomes each year. Only the Western Entrance can be used. 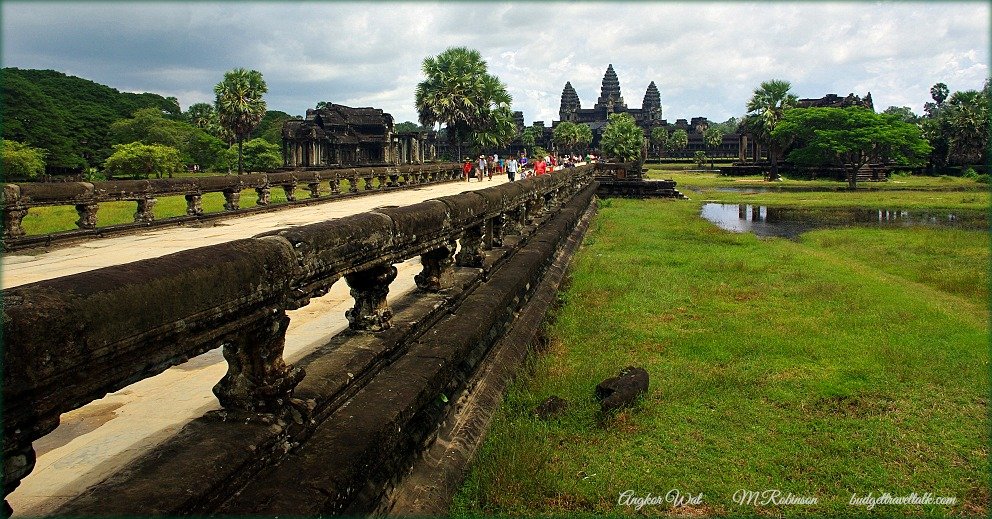 Having crossed the moat via the sandstone causeway and left the outer wall behind, a 475 metre long internal Avenue leads toward the central temple complex. On either side of the walkway stands a single Library building.

It was common for there to be a library either side of a Wat entrance, but although the name Library conjures up thoughts of manuscripts and books for us, these were more likely to have been used as religious shrines.

The photo below shows the Library on the left. 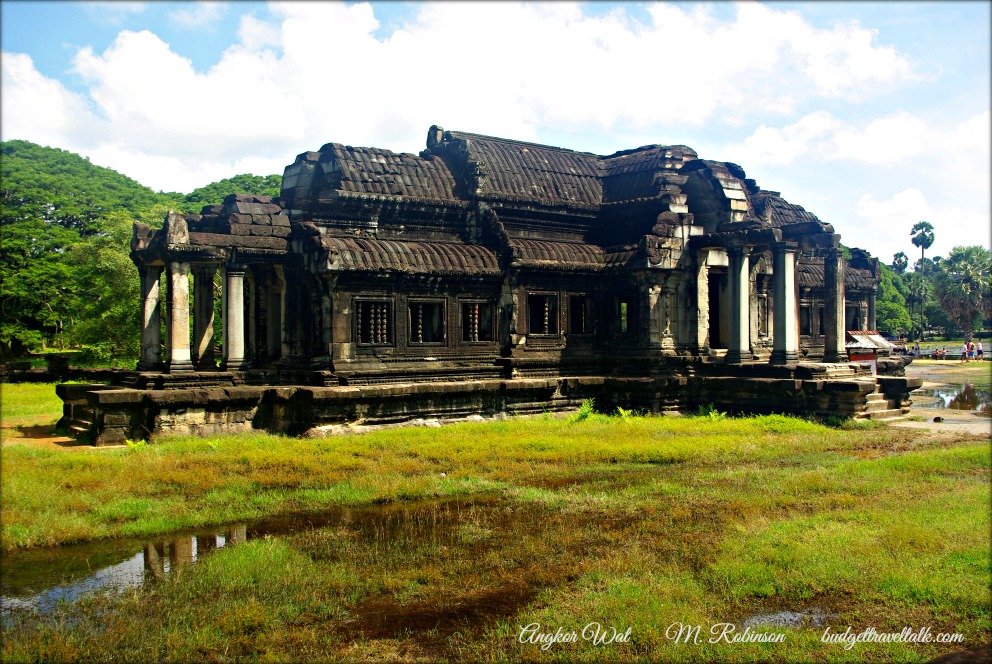 On the far right of the photo above is the left of the twin pools from where the iconic Angkor Wat reflection photographs are taken. It is the place where sunrise shots are taken.

The left pool always has water in it while the right is seasonal. 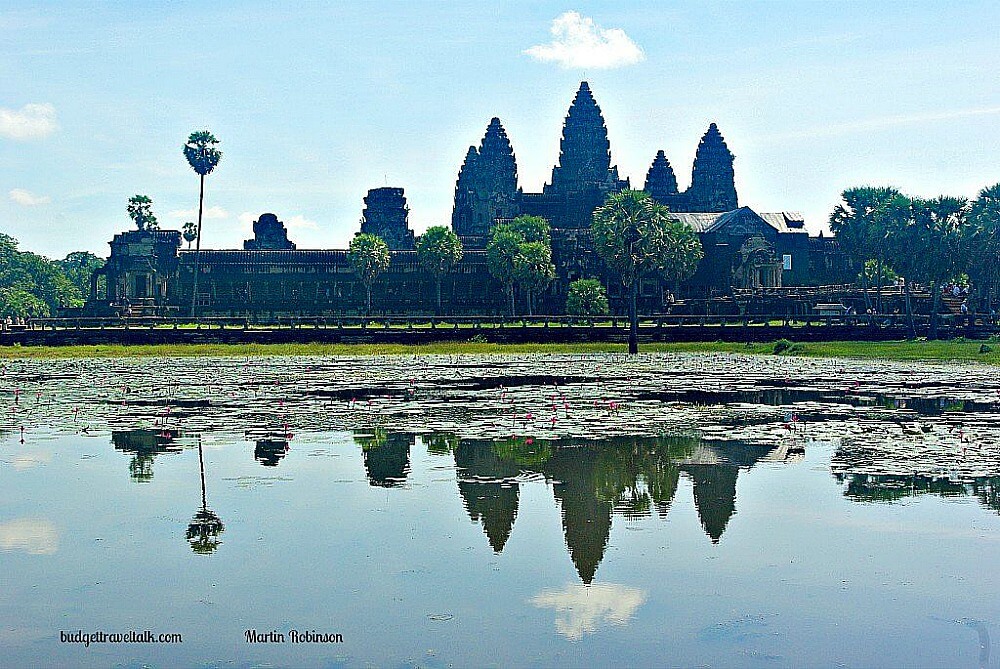 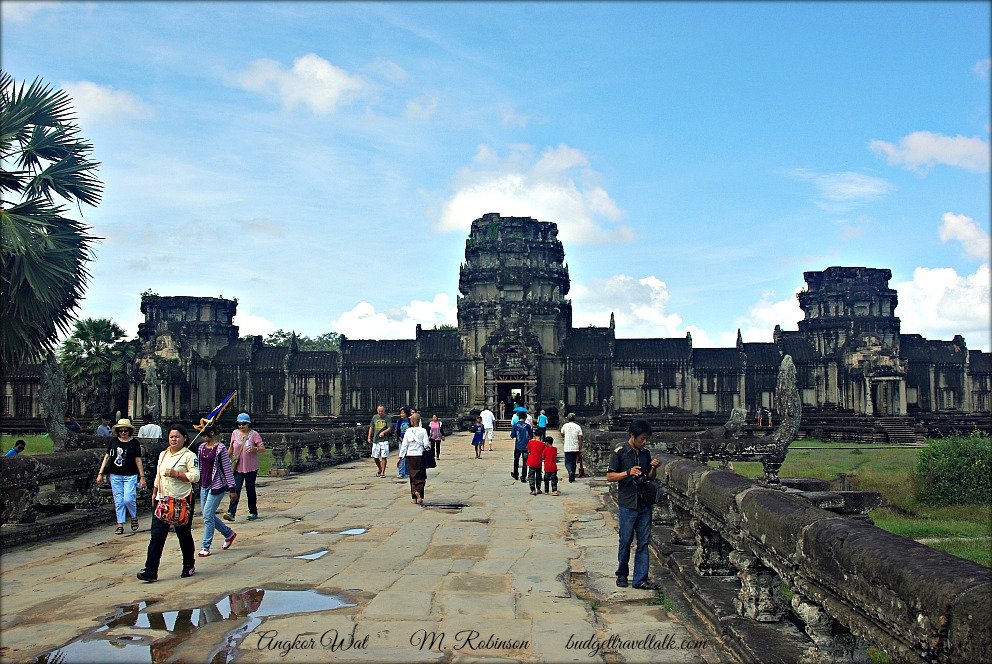 The Naga is an important Cambodian symbol and is prevalent at Angkor.  If you are like me and don’t like snakes don’t worry – Nagas have a protective aura not a threatening one.  The balustrades are Naga Balustrades, with heads on each end.

Originally used by Brahma the Hindu God of creation, to protect his palace doorway and so it is here to protect the gods of Mt. Meru. 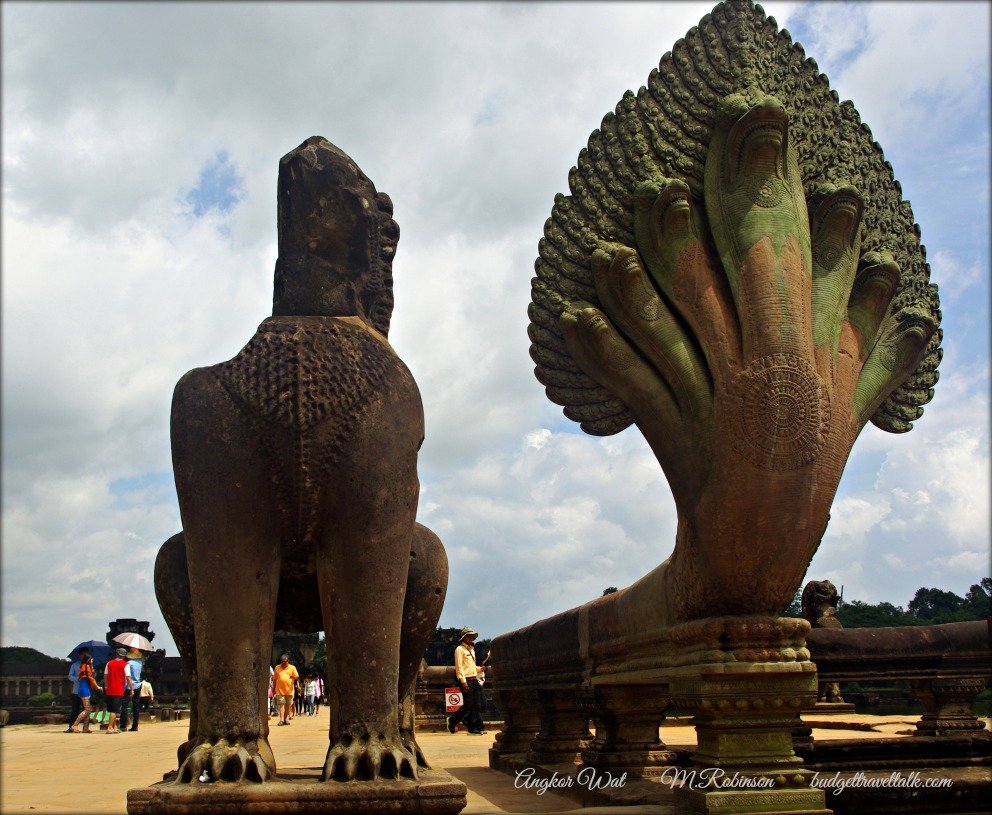 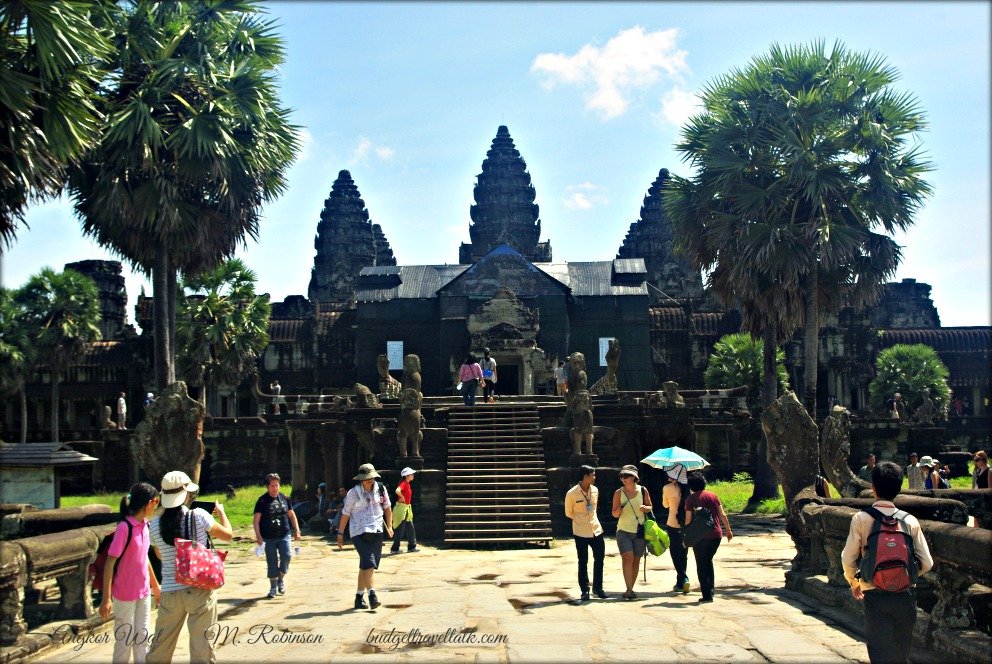 What to see in Angkor Wat?

Their burnt orange robes being a common sight, while monks dressed in Brown can also be seen.

The eight armed and 3.25m high statue of Vishna.

It is made from a single stone and is topped by a jaunty umbrella.

The longest bas reliefs in the world.

They surround the central temple and are still in amazingly good condition – mostly completed in the late 11th/early 12th Century with some added in the 16th and still not finished today.  If you have a guide they will tell you the stories as you view the panels. I remembered the stories as those enacted by the Hindu Temple Dancers in Bali. The bas reliefs are roped off in order to preserve them, but it is still possible to get an up close view of the detail. As well as Hindu mythology there are intricate portrayals of Khmer life – fishing nets, traps, crocodiles and cooking.

You will find them carved into the walls for the pleasure of the gods, each supposedly unique – they even have 37 different hairstyles. Unfortunately damaged by a 1980’s Indian acid clean gone wrong the damage is now being corrected by the German Apsara Conservation Project. 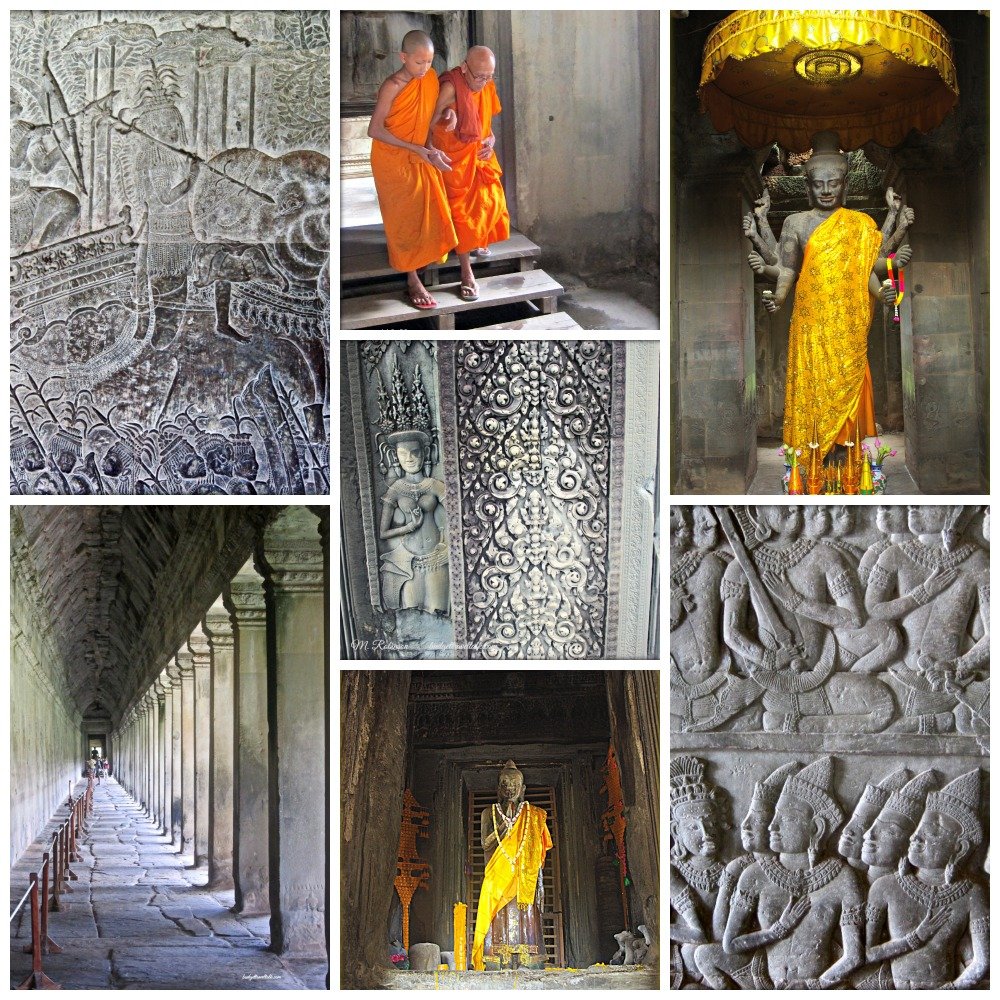 Bakan the Kingdom of the Gods.

The third storey of the central temple is known as Bakan, the Kingdom of the Gods, and is suitably difficult to reach – check out the slope of the stairs.  For several years the Kingdom of the Gods was not accessible, but is now open for business, although visitor numbers are limited.  We visited mid October when afternoon rain was still a problem, but not visitor numbers. 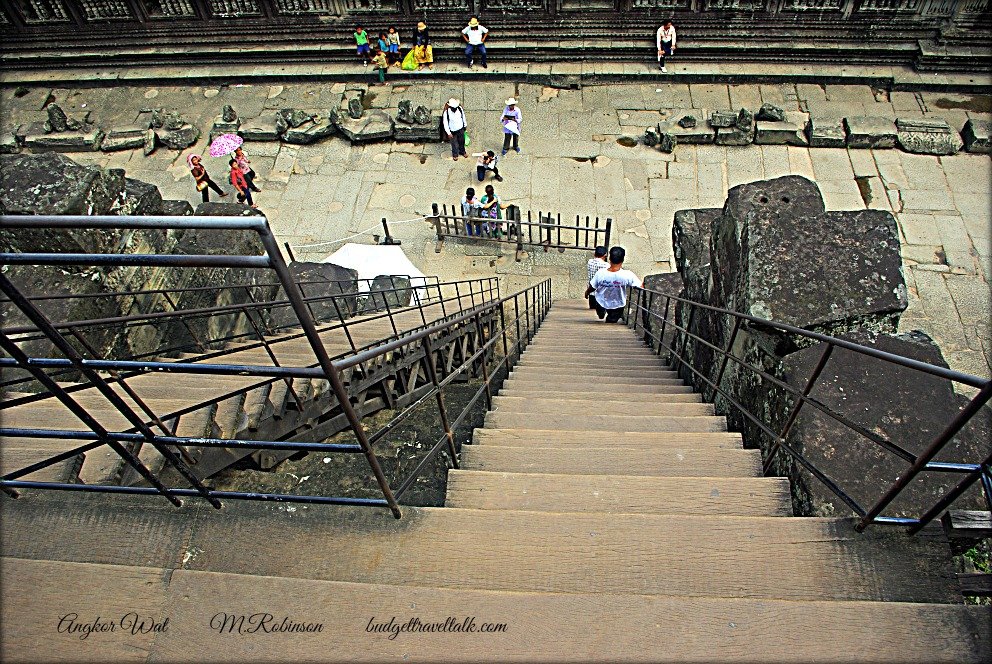 The view from the top of Bakan.

Looking toward the outer walls beyond which lies the main Western Entrance. 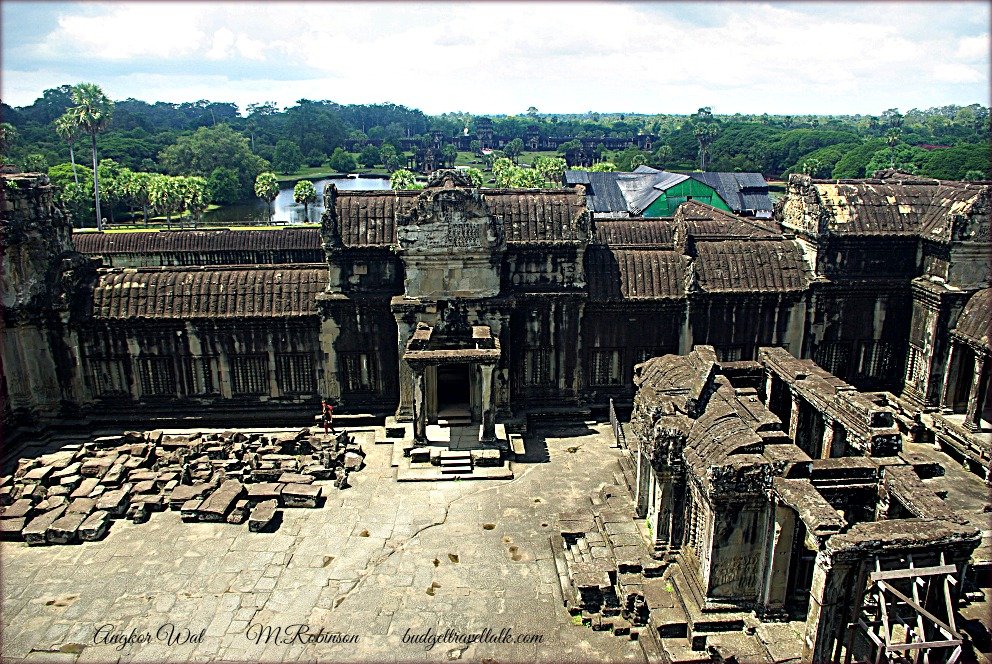 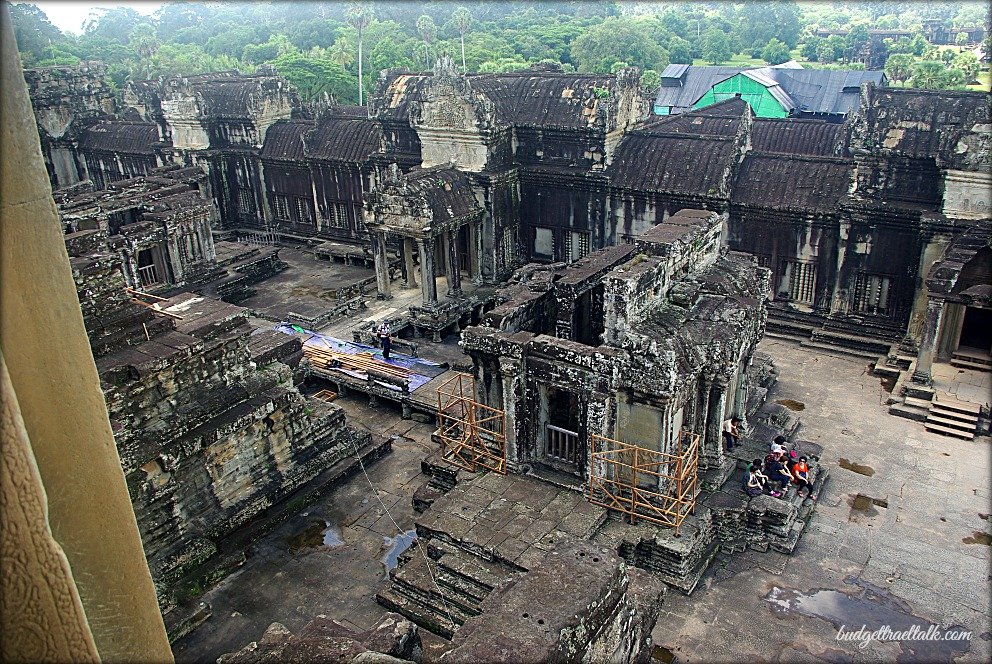 Why was Angkor Wat built?

There are two schools of thought.  The Wat’s orientation is to the west meaning death, an indication that it was built as a tomb for Suryavarman II, who was killed in battle but whose body was never recovered.

On the other hand Vishnu is also associated with the west and it was probably built primarily for him. In either case Angkor Wat is dedicated to Vishnu.

Most of the temples or wats at Angkor Wat face east and so the best time to take photos is the morning. With Angkor Wat itself facing west, it’s best time is the afternoon.

Ta Phrom and Preah Khan have overhead foliage and so can be photographed with the sun overhead.

Why is Angkor Wat important?

Angkor (meaning City) Wat (meaning Temple) was the centre of ancient Khmer civilisation. It is a huge part of the modern Cambodian psyche and features proudly on the Cambodian flag.

Purchase at the ticket office at Angkor Archaeological Park where your photograph is also taken.

The 3 day and 7 day passes do not have to be used on consecutive days.

We purchased our Angkor Wat ticket at 9.30 a.m. mid October and there was no waiting.  The tickets are quite flimsy and should be kept in a protected place. As there can be sudden downpours a dry bag or plastic sleeve is probably a good idea.

If you have a guide they will take you to the office to purchase your ticket on the way to Angkor Wat.

The one ticket gives access to all wats in the Angkor Wat park.

There is an ATM at the office now and Credit Card is now an allowed form of payment.

Tickets are non-refundable and non-replaceable if damaged or lost.

Word on the street is that if purchased at 5 pm they can be used that night as well.  Angkor Wat closes at 6 p.m.

A personalised Angkor Wat tour in a tuk tuk with driver and guide can be arranged through your hotel or guesthouse. In our opinion hiring a guide is very beneficial. Not all drivers can speak English and they stay with the tuk tuk whereas the guide escorts you around the wats. Your guide should be approved by the authorities and wear an official shirt.

We learned about Angkor Wat from our guide Borith. He knew where to eat and met with us beforehand to discuss which temples we wanted to see. He also knew the best vantage points for photos and often volunteered to take photos of us – actually he loved taking photos!