Cape Byron on the far north coast of New South Wales overlooks a wild and stunning ocean and a bevy of beautiful Byron Bay beaches.

Known as the most easterly point on the Australian mainland, the Cape now crowned by a vivid white lighthouse was discovered by Captain James Cook back in May 1770. He named it after “Admiral John Byron” but the local aboriginal people use the traditional name of Cavvanbah – Meeting Place.
[pinit] 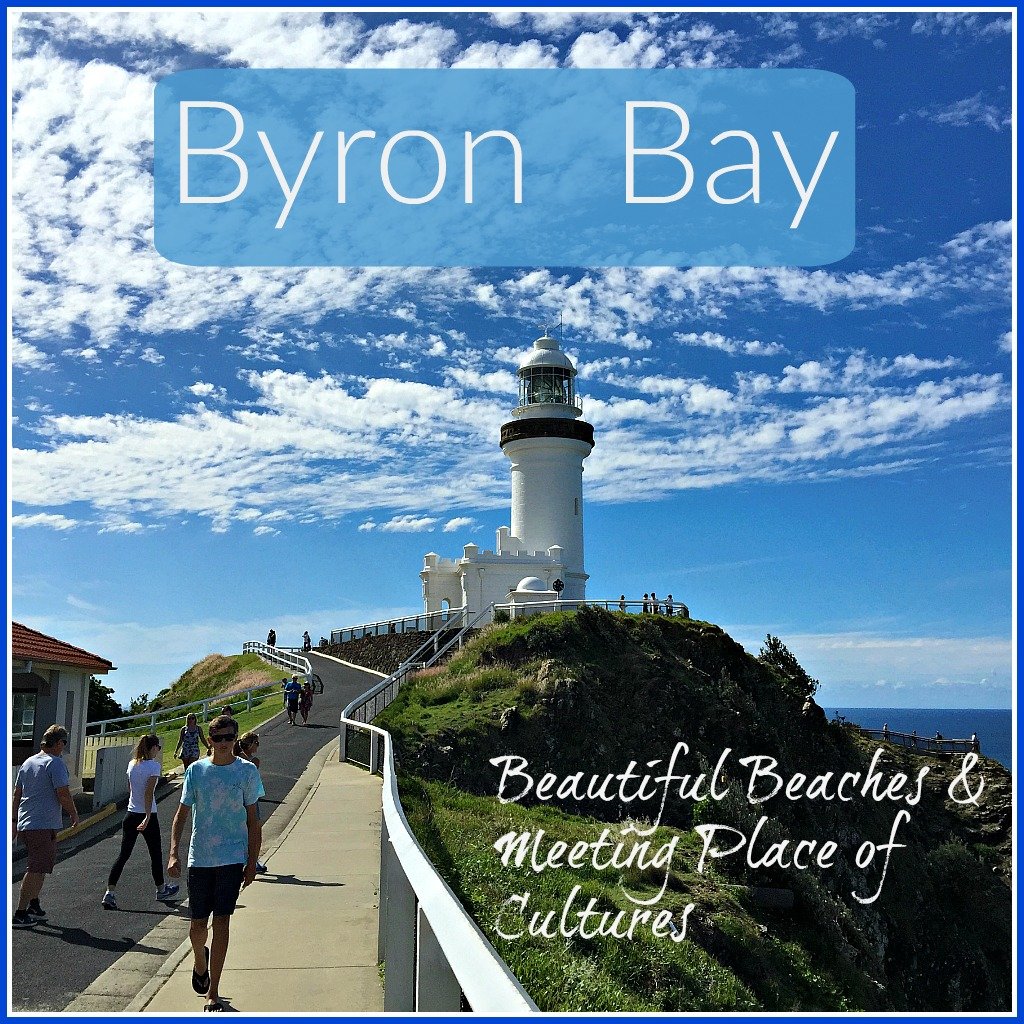 Today Byron is a different kind of meeting place with a thriving surf culture (The Pass, Wategos, and Cosy Corner breaks), the hippy culture of the hinterland (Aquarius Festival at Nimbin 1973) and the tribe of celebrities who fly in to spend time at luxurious homes in The Bay. 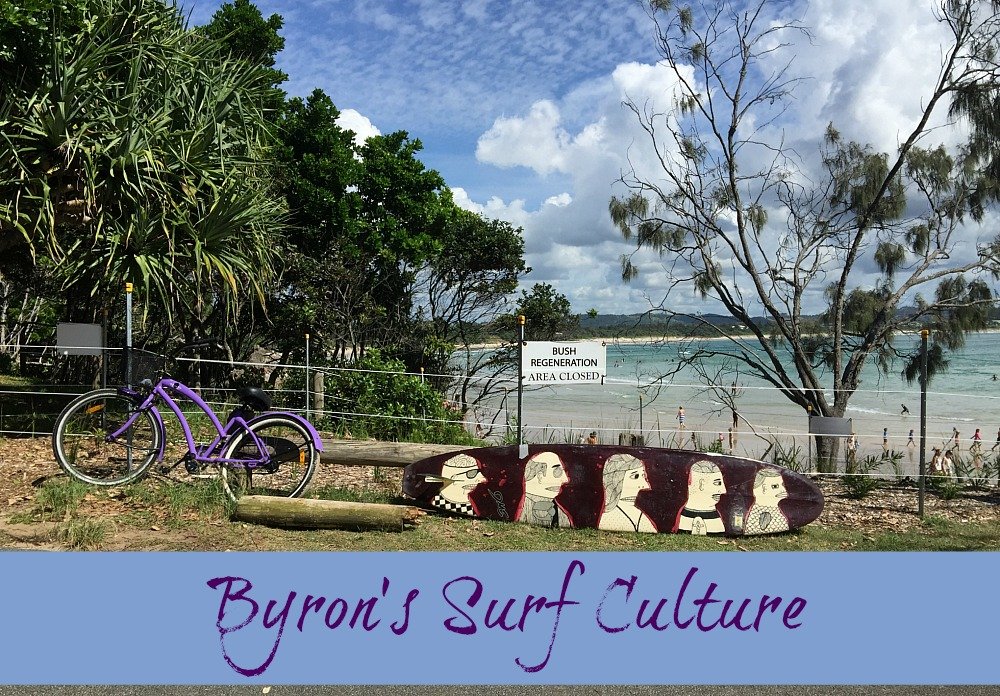 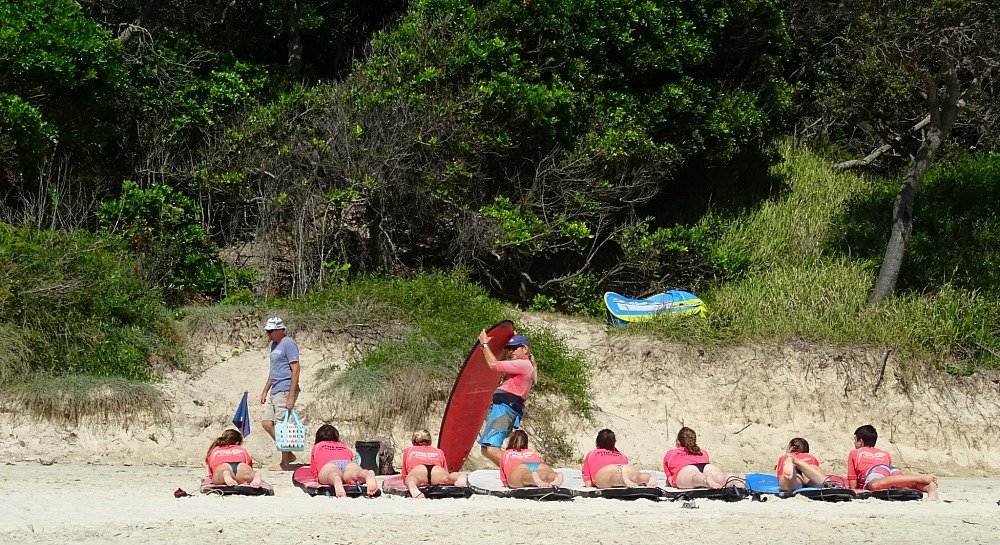 Byron back in ’88 was a great place to site with our then 8 month old daughter in a free and easy grassed courtyard, chilling with a beer and some good music. This time around daughter, now a vegan hippy 32 year old yoga instructor has flown the nest. Circumstances change and some things are new. Or are they?

What is new in Bryon Bay?

Once the parking at Byron was as free as the hippy’s that lingered on the beach, but Byron Bay Council have now embraced paid parking big time.

On 23rd December, 2015, Byron Shire Council (parking map on site) went from charging zero dollars to $3 per hour for the privilege of parking the Kombi down town and beachside. It’s enough to make a person down another Stone and Wood. *

What’s the same in Byron?

Although a lot more people now visit Byron, it still has that small country town feel about it. The atmosphere is chilled and the spacious beaches manage to absorb the crowds and still have space for more.

This of course applies to any time outside of peak holiday times and music festival times.

Peak Season Warning. It can take 20 minutes to travel 5km along the Ewingsdale Road connecting Byron to the Pacific Highway.

In late April the traffic was free flowing.

The 1.7 million people who enjoy Byron Bay tourist attractions every year – mostly in summer – are well catered for at the Byron Bay Information Centre.

There are luggage storage facilities available at the Tourist Information Centre.

Staff will help you plan your time in Byron, whether it be for a few hours or much more.

Having purchased sunscreen at the Woolworths Supermarket in Jonson Street, we stopped in at the Byron Tourist Information Centre.

The helpful employee asked if we were up for a walk and before long we’d committed to a walk along Ocean Way as far as the lighthouse.

Ocean Way has spectacular views over the beach but we put our own spin on things and opted for a walk along Main Beach, Clarkes Beach and Wategos Beach.

I prefer the beach over a hill climb any day. The only hitch was having reached “The Pass”, we then needed to climb the hill via the road anyway. Sigh…

High Voltage on the way to Main Beach. 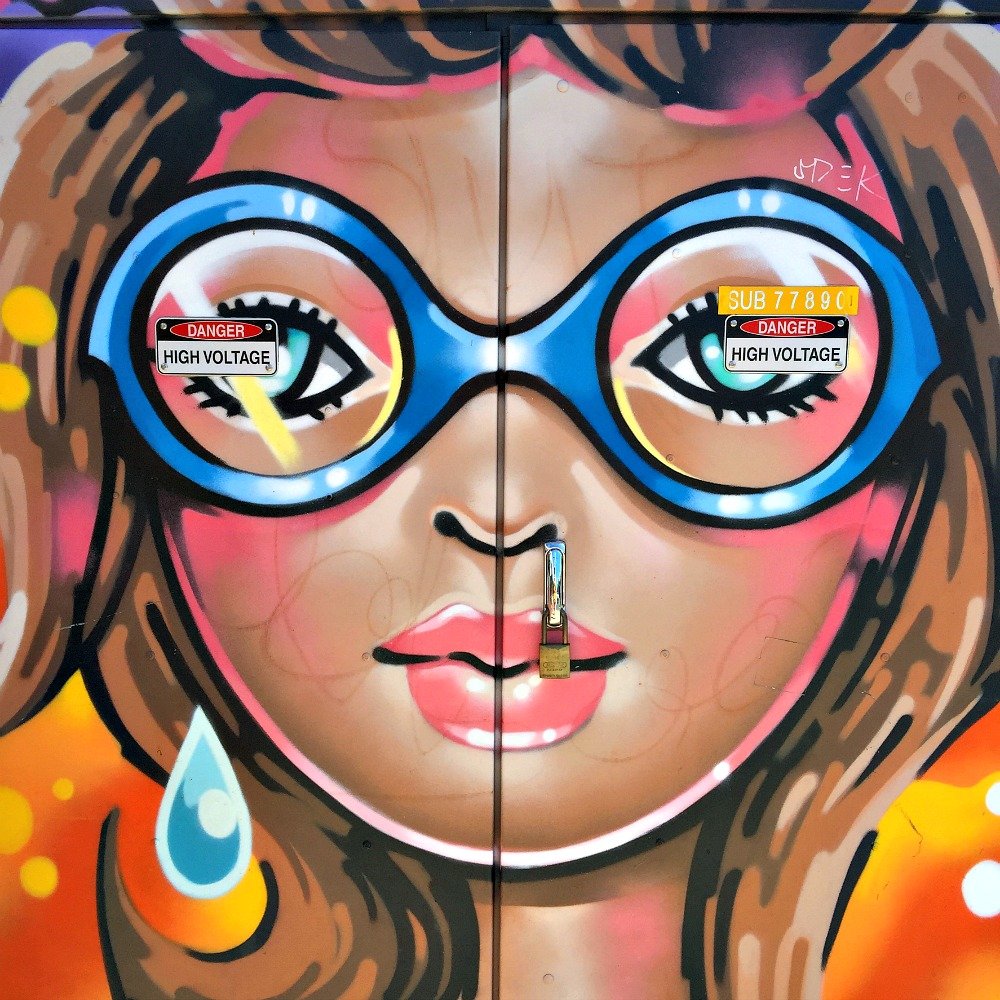 Reflective window shopping on the way back from Main Beach. 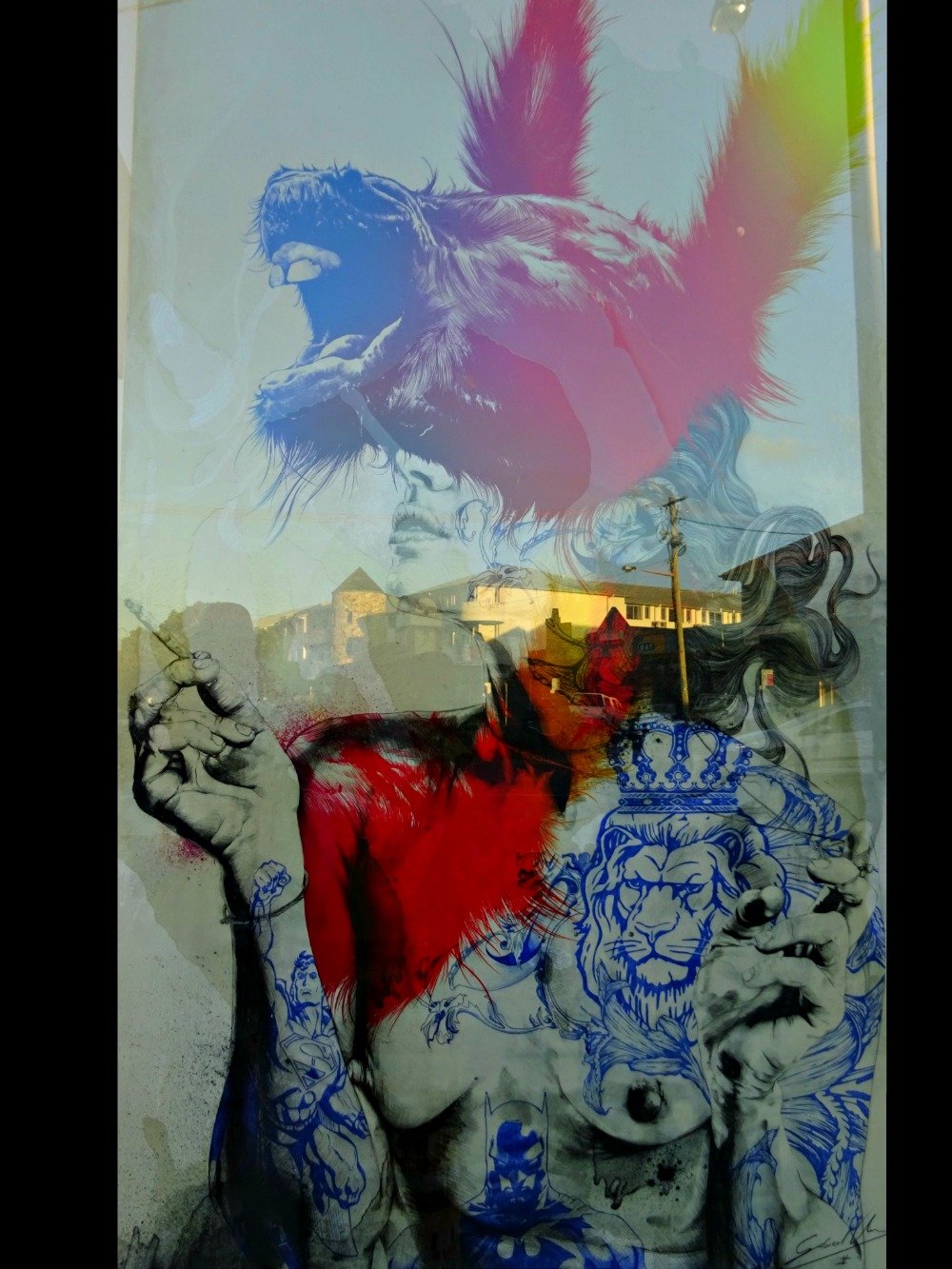 Across the street from the Tourist Info Centre is Byron Corner Store, laying claim to the cheapest and best coffee in town, including free wifi.

The coffee was excellent and through the open bifold windows, was a close up view of the snaking line for local’s tickets to Splendour in the Grass on sale at the pub across the street.

Byron is also home to the annual Byron Bay Bluesfest and The Falls Music and Art Festival. 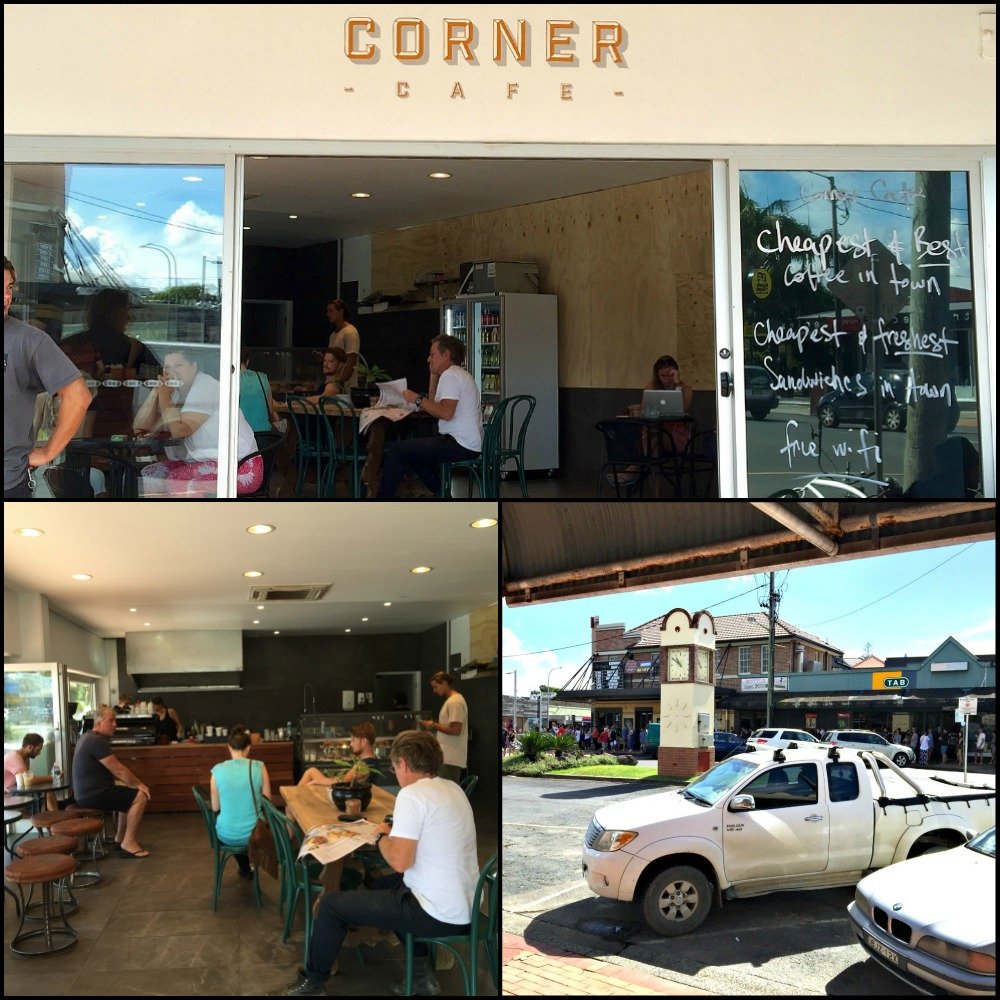 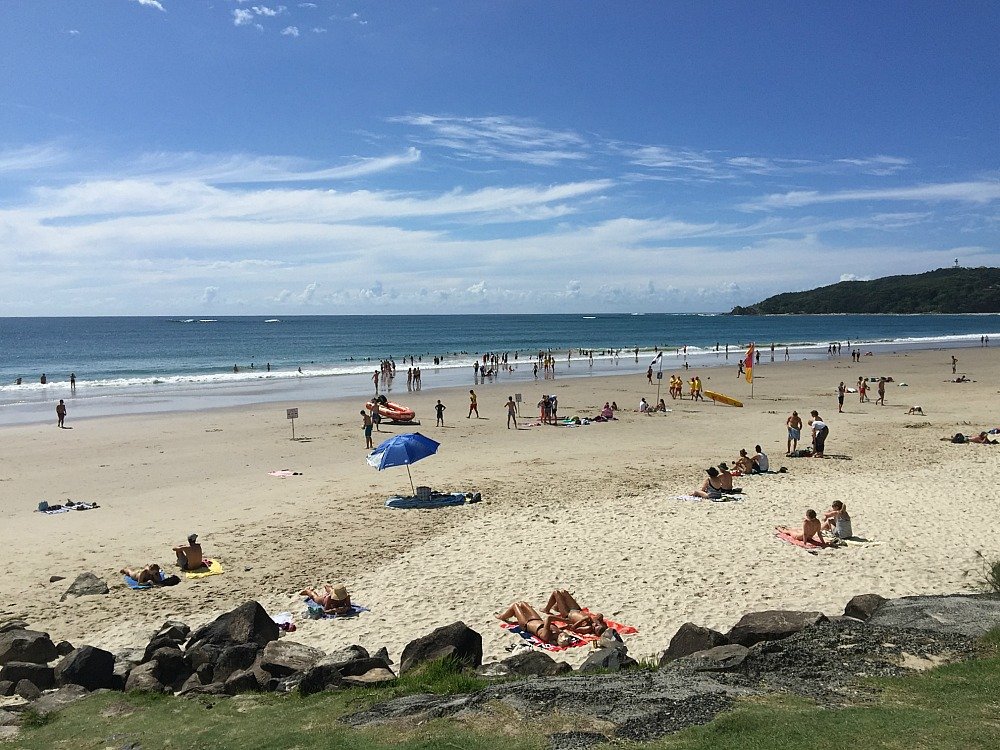 And in the Afternoon. 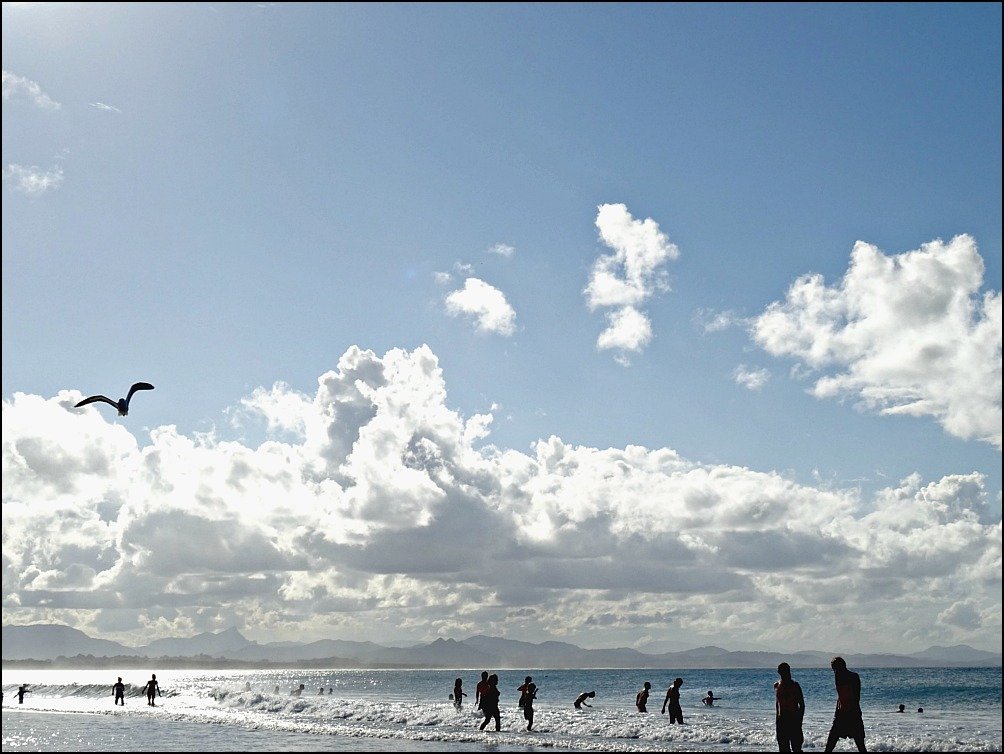 Food in Byron runs the full gammut from ethically sustainable to decadent, but on a walk from Main Beach to the Lighthouse the Pass Cafe is a very handy choice.

Think bush, beach and deck, situated on a rise adjacent to the iconic Pass Surf Break. A sample from the cafe menu (fully licensed) – Yakitori Japanese Chicken Burger or a Wagyu Beef Burger will both set you back $14 or a small potato chips $5. Perfect beach food. 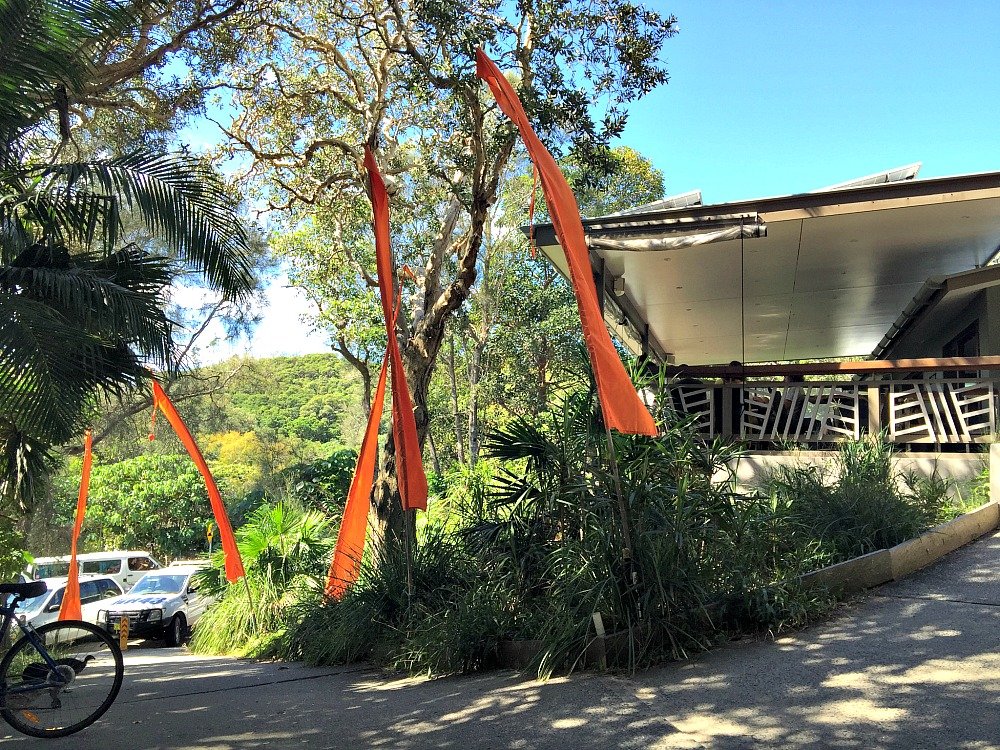 Climb the steps to the platform to watch the long peeling right handers. 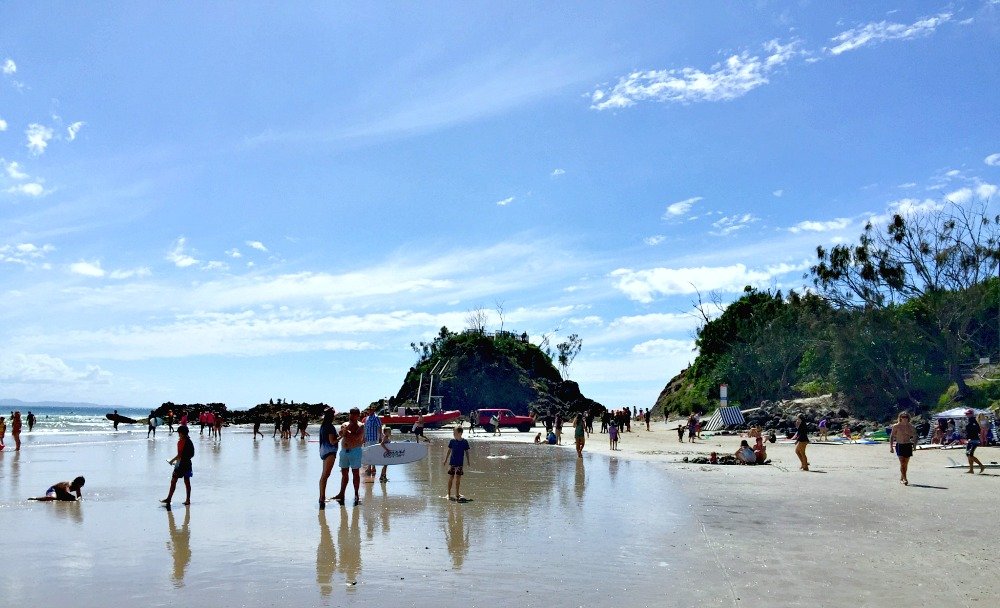 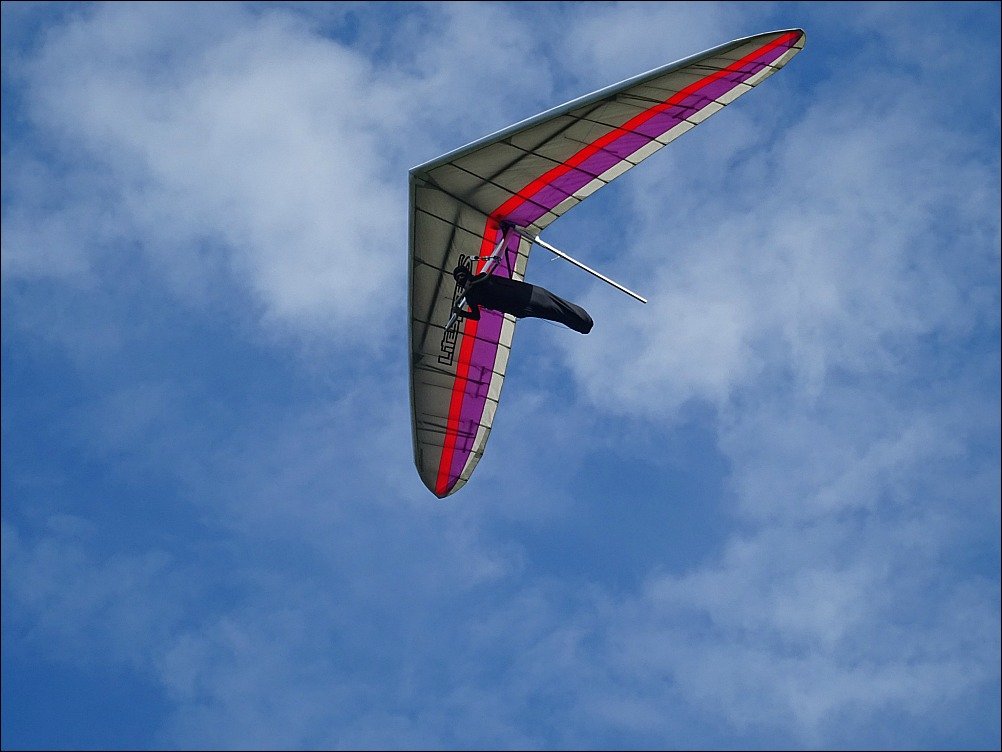 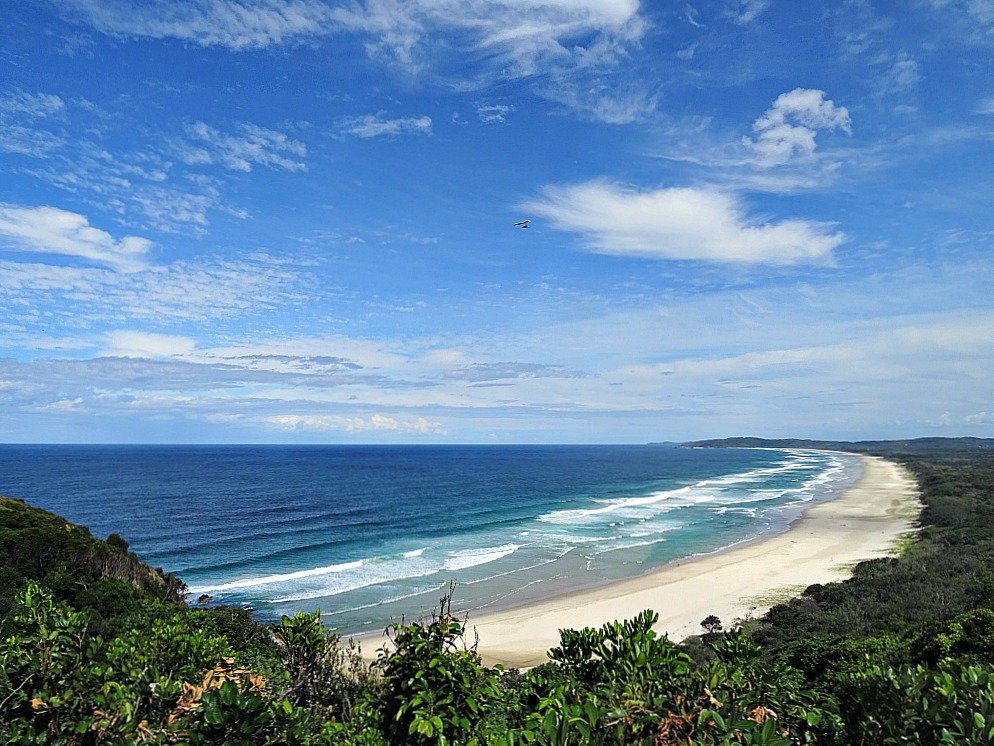 An impressive place to grab a drink and maybe something to eat. Dining with a fabulous view. 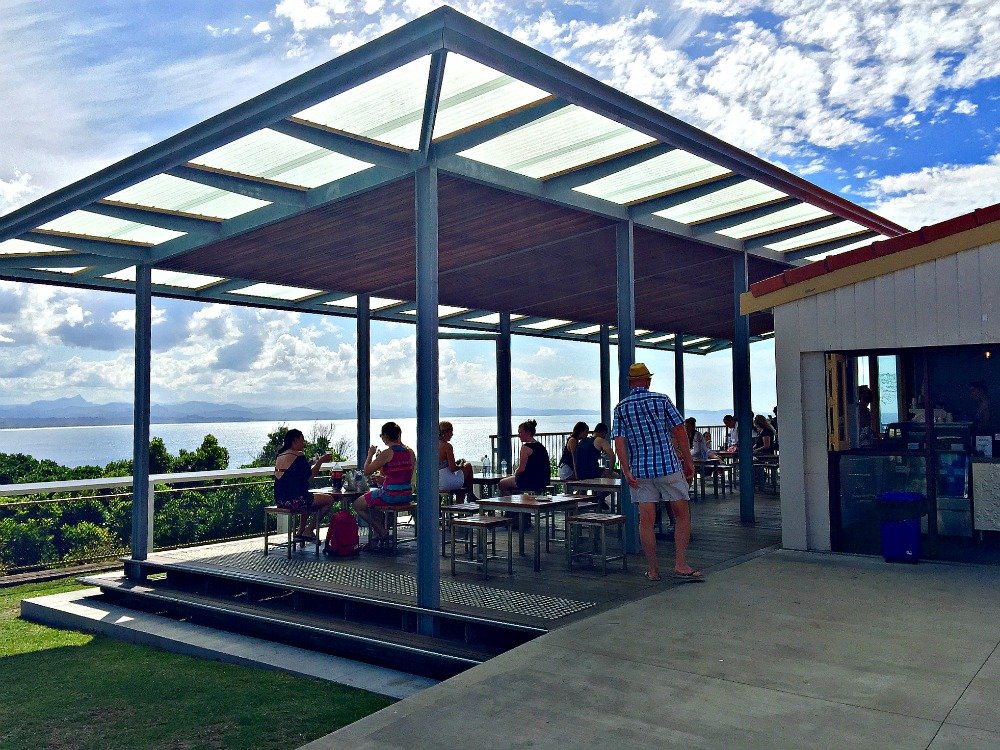 Return to town from Cape Cafe on the Cape Byron Walking Track from the most easterly point of Australia. This is a spectacular walk and a great way to enjoy the beaches in reverse and enjoy a Byron Bay sunset. 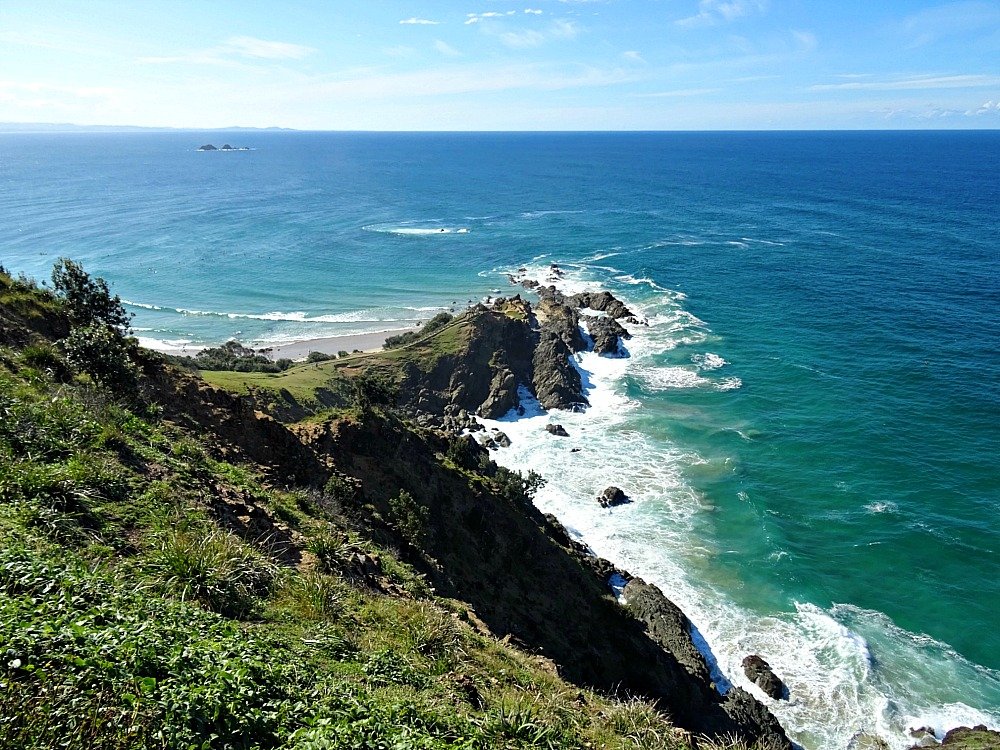 Talk about iconic beaches. This is Wategos in the morning from The Pass. 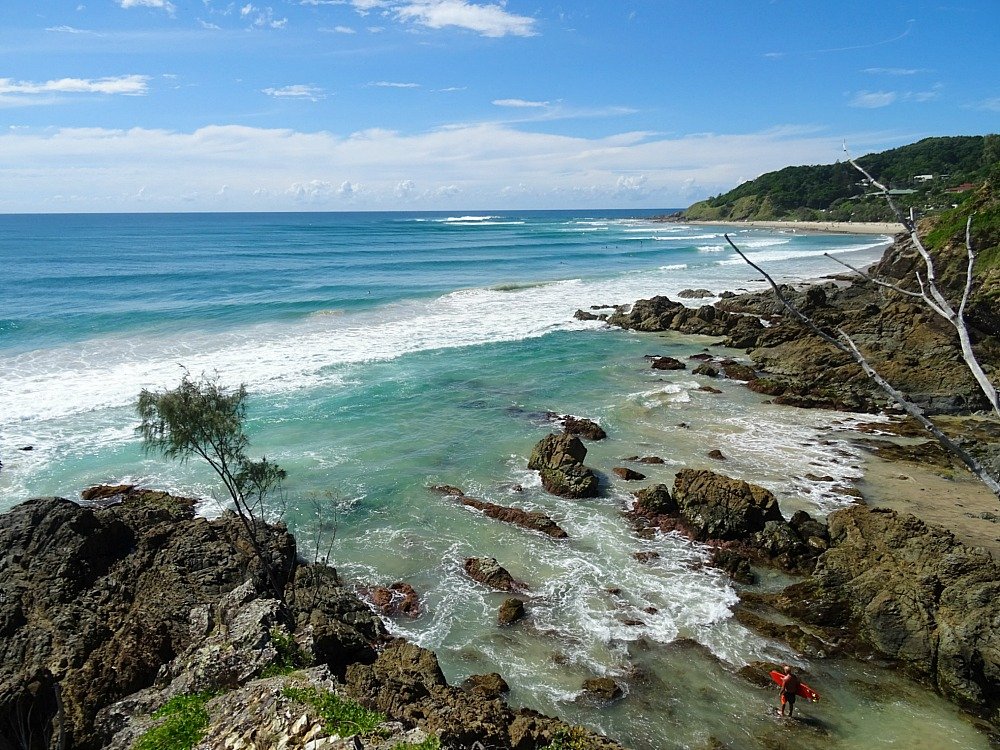 Wategos Beach from the Headland Reserve in the afternoon. 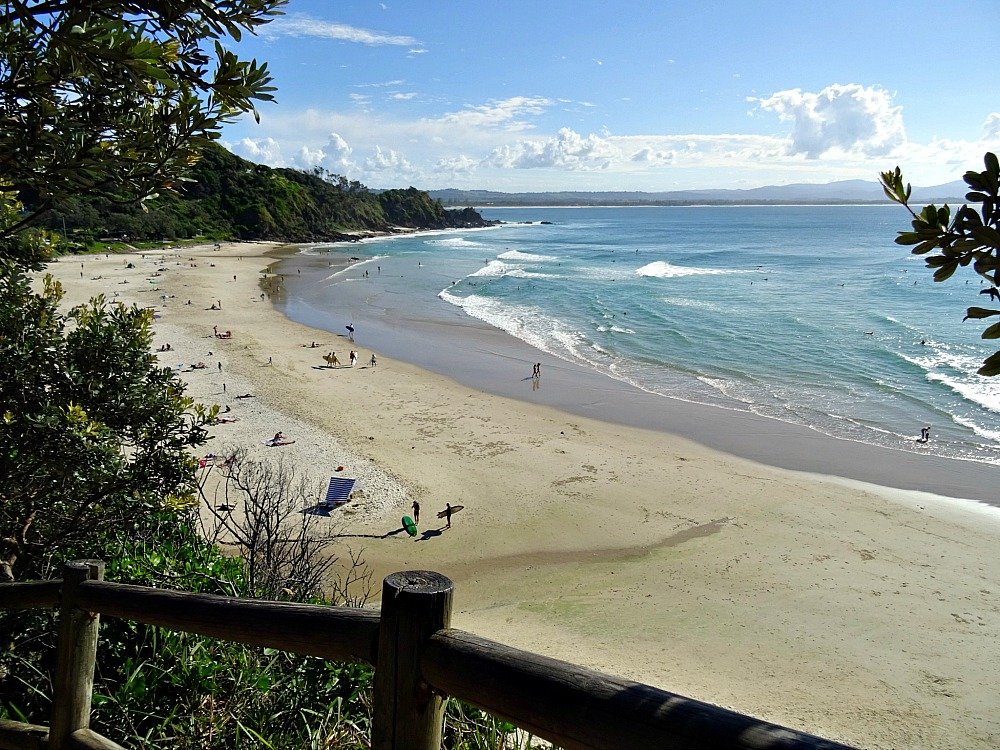 Back in Byron township…

The Beach or Top Pub, with views toward Main Beach, was the venue for my first taste of a Stone and Wood brew*. I’m usually a super light lager drinker, so my first mid-strength Hoppy Beer off the tap was quite the revelation.

I was smitten and although it was probably just a holiday romance, I lined up for another.

As you would expect Beach Hotel has compostable straws and recycled cups with recycling growing from 10% to 90% in only 4 years. This is a true beach hotel adapted to it’s audience. Open from 8 am for coffee and brekkie it changes along with the day. It is great for an after beach beer and a classic pub lunch.

The band played old rock all afternoon during our visit with a different band scheduled that night. You can see their Gig Guide on Line.

Security was beefing up when we left late in the afternoon. 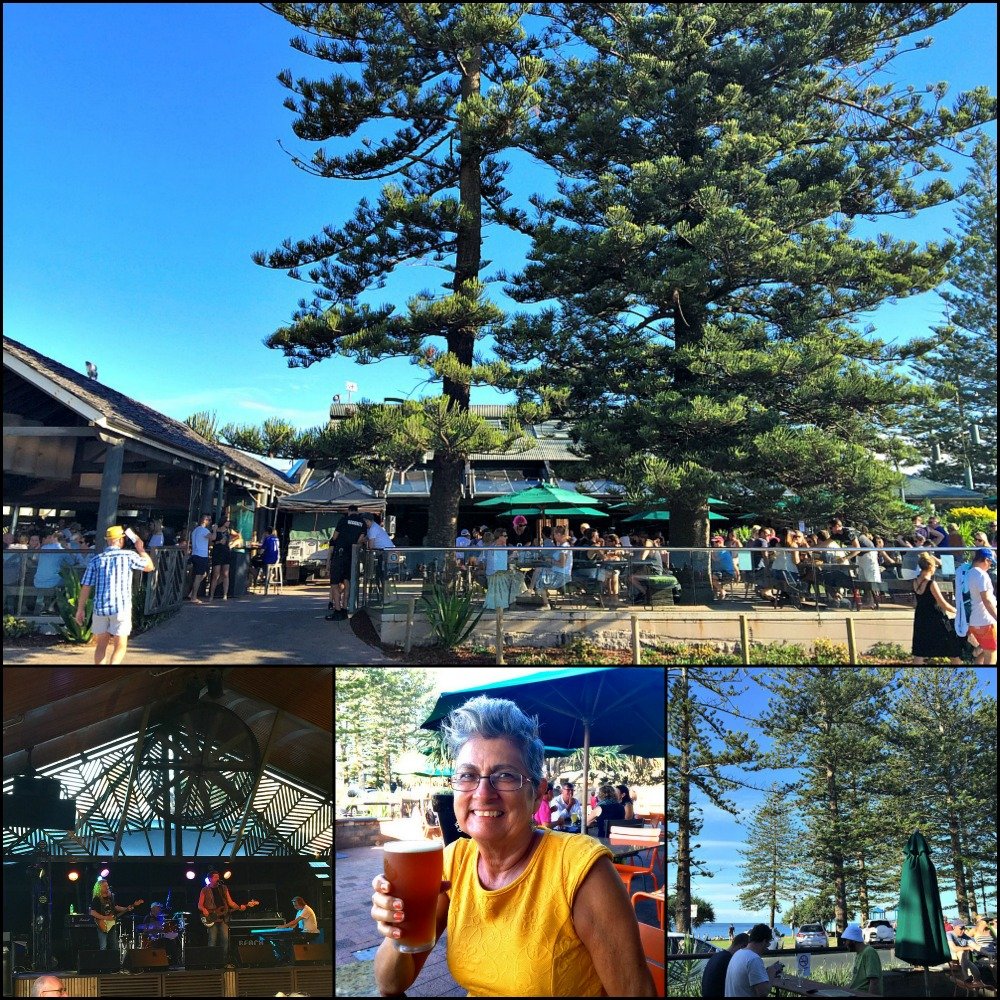 Stone and Wood Brewery is right here in Byron. Try a Tasting paddle for $10 or a tour for $12. Or for a more in depth 4 hour tour taking in two breweries and a distillery, beginning at 2 pm. I.D. required.

Byron is a popular Yoga destination with something for everyone, from Luxury Resort Yoga Retreats to classes at the local Community Hall.

Ananta Yoga even has Surf Flow yoga classes that concentrate on keeping the body in peak condition for surfing – why am I not surprised?

I personally dropped in at Byron Yoga Centre on Skinners Shoot Road for a 90 minute $10 yoga lesson, led by their Yoga Teacher Trainees (under supervision). Started in 1988 Byron Yoga is one of the top yoga schools in the Australia. The Skinners Shoot Road campus keeps organic vegetable gardens to cater for their healthy eating yoga retreats. 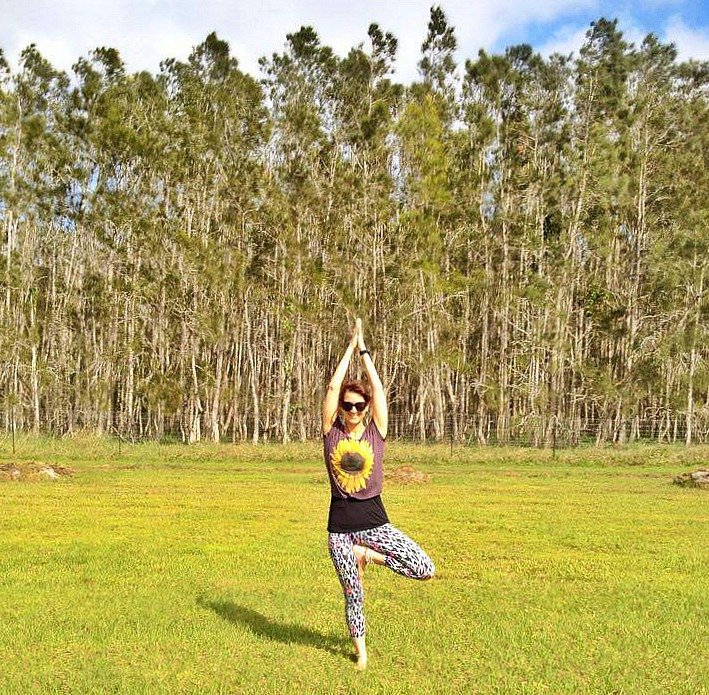 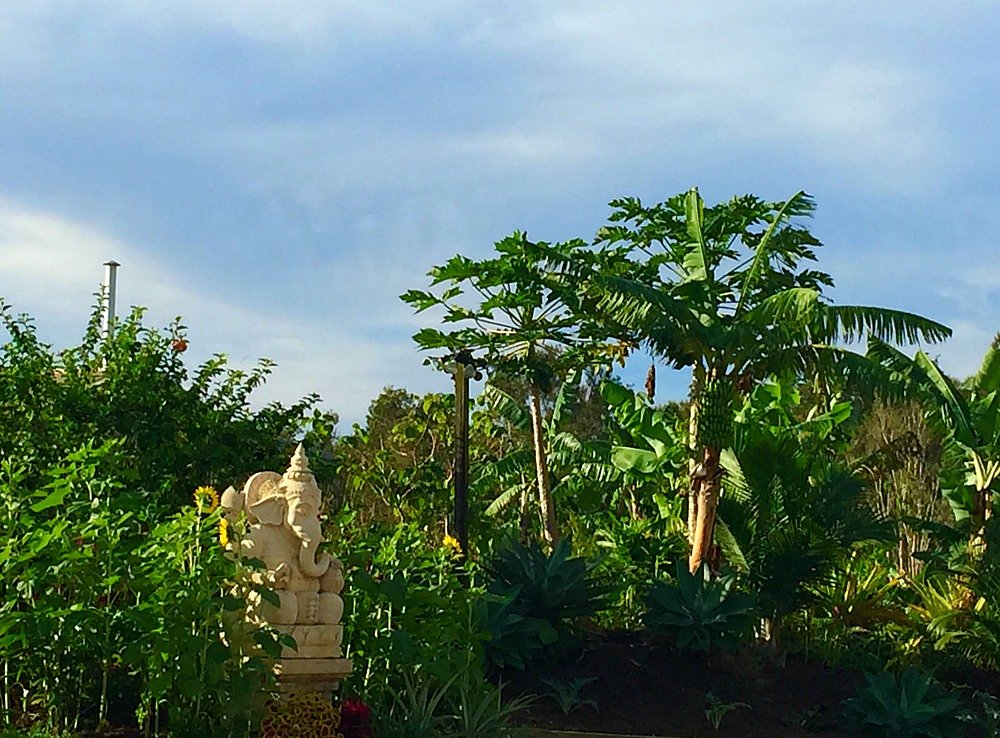 Mullum one of the Byron Bay Regional markets. 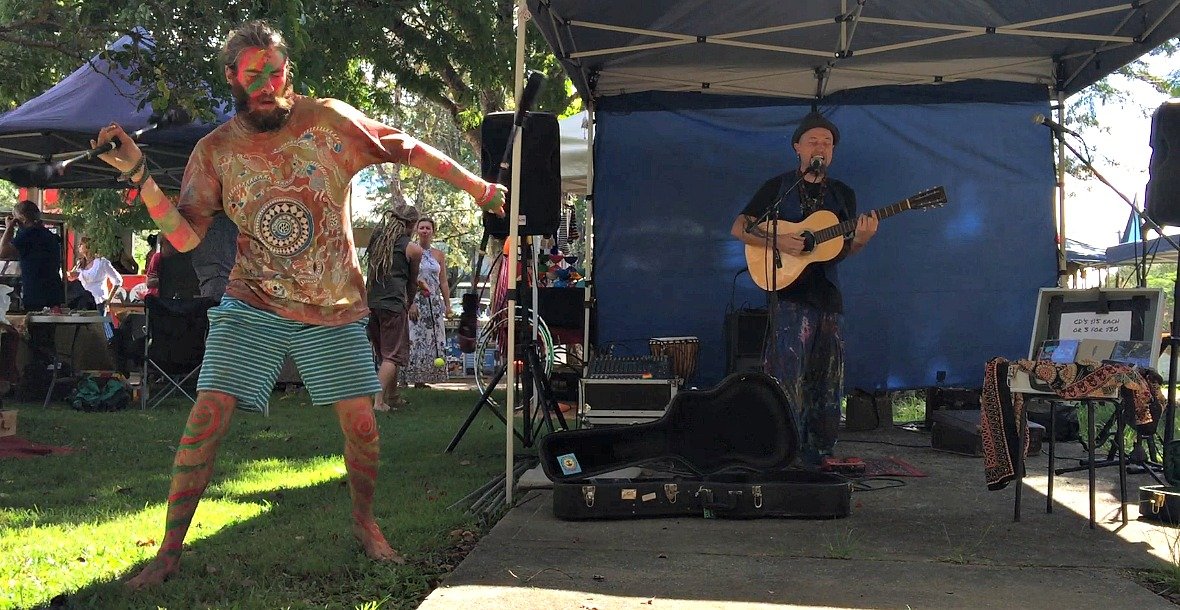 One market I have earmarked for next time is The Channon Market on the second Sunday of the Month.

Where to Stay in Byron Bay

Think outside the square. Twenty minutes to the north of Byron is the Ferry Crossing Caravan Park on the river and highway at Brunswick Heads. In late April prices there were less than half that of the caravan parks at Byron. We enjoyed visiting Byron for part of the day and then browsing the second hand shops and cafes at Brunswick Heads before heading back to Ferry Crossing.

The cost to park a van in a riverfront position at Ferry Crossing in November is $92 for two nights.

An Airbnb Room in Byron Bay

A search of Airbnb showed this room in a Byron Bay House for $99AUD/night for two people.

How to get to Byron Bay

Sydney to Byron Bay by Road

Byron is 772 km north of the State Capital of Sydney, but only 165 km south of Queensland’s Capital of Brisbane.

Brisbane to Byron Bay by Road

Jetstar and Virgin budget airlines fly into Ballina, 30km to the south (allow 40 minutes for shuttle)