Why visit Gallipoli in Turkey?

On one side of the Gallipoli Peninsula in North-West Turkey lies the Aegean Sea and on the other, the narrow strait connecting the Marmara Sea with the Aegean, known as the Dardanelles or the Canakkale Strait.  For Australians and New Zealanders, Gallipoli is one of the most popular places to visit in Turkey, especially on 25th April each year for the Gallipoli dawn service to commemorate Anzac Day.

The Peninsula is a peaceful place to visit the rest of the year.  The beauty of the Gallipoli landscape, Dardanelles and the Aegean alone is a fitting tribute to all the soldiers whose lives were lost on Gelibolu.

From the Kordon in Çanakkale there are fantastic sunsets over Gallipoli. 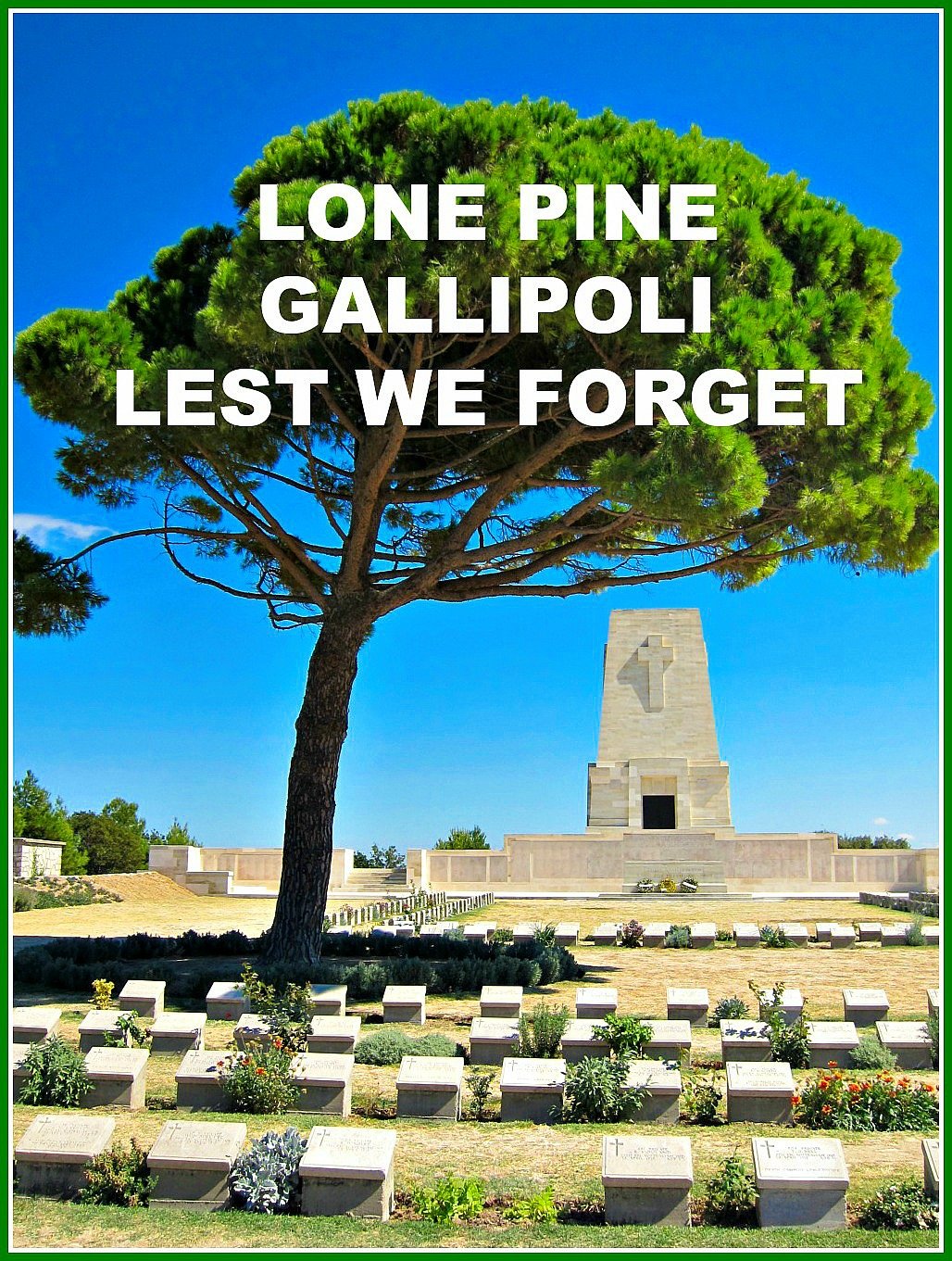 Britian and her Allies were the Agressors but The Ottomans were the victors. The battle raged from April 25th 1915 to 9th January 1916.

Some eight years after that battle, the modern Republic of Turkey was formed under the leadership of the much loved Mustafa Kemal Atatürk who first came to prominence as a commander during the war.

Anzac Cove is a 600 metre long cove on the north west side of the Gallipoli Peninsula in Turkey. Although the beach is small in size it is of huge importance to allied supporters as the site of the Gallipoli landing of Australian and New Zealand troops (ANZACS) on 25 April, 1915. 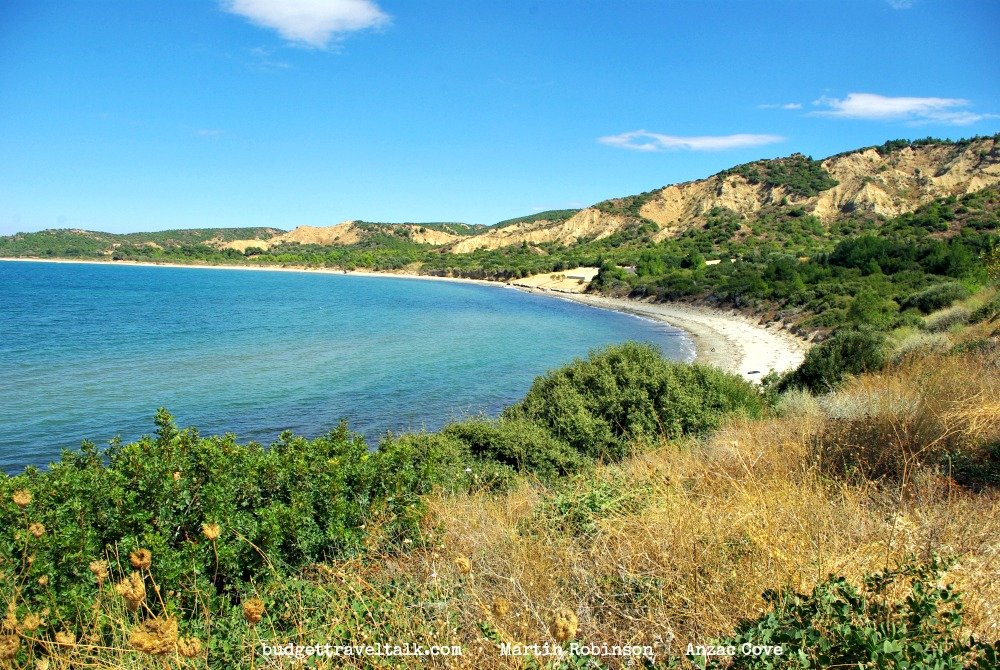 The Anzac Soldiers landing in Anzac Cove named this headland “The Sphinx” for it’s likeness to one at their previous posting in Egypt. It towers over the Anzac Cove Commemorative site. 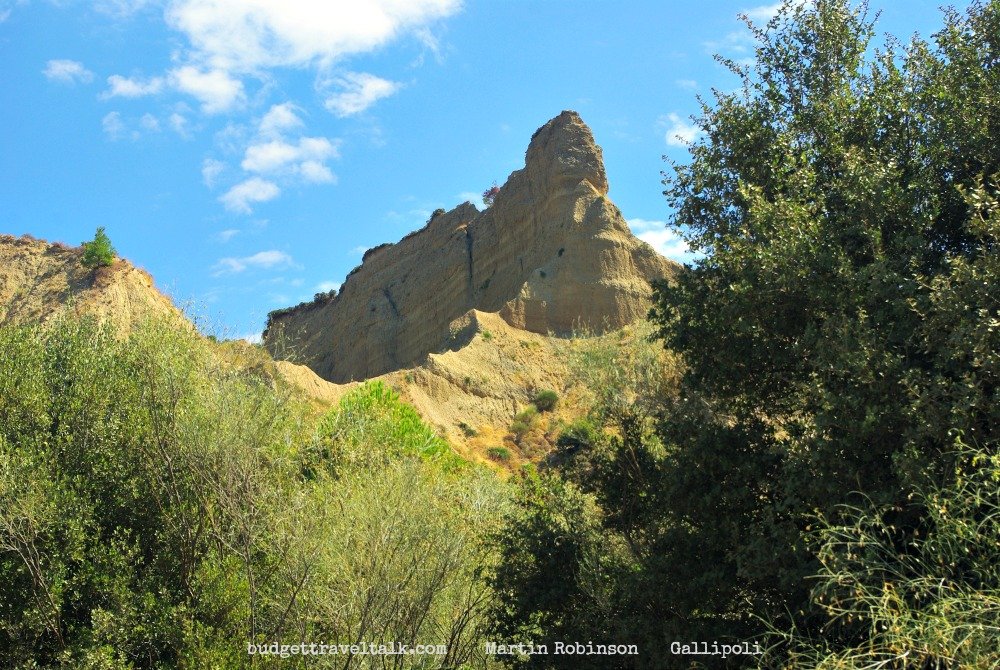 On Anzac Day 10,500 people are accommodated on this site.  Tiered seating is arranged around the perimeter with standing room in the middle.  The walkway in the foreground (below) is where the commemorative plaques are displayed. 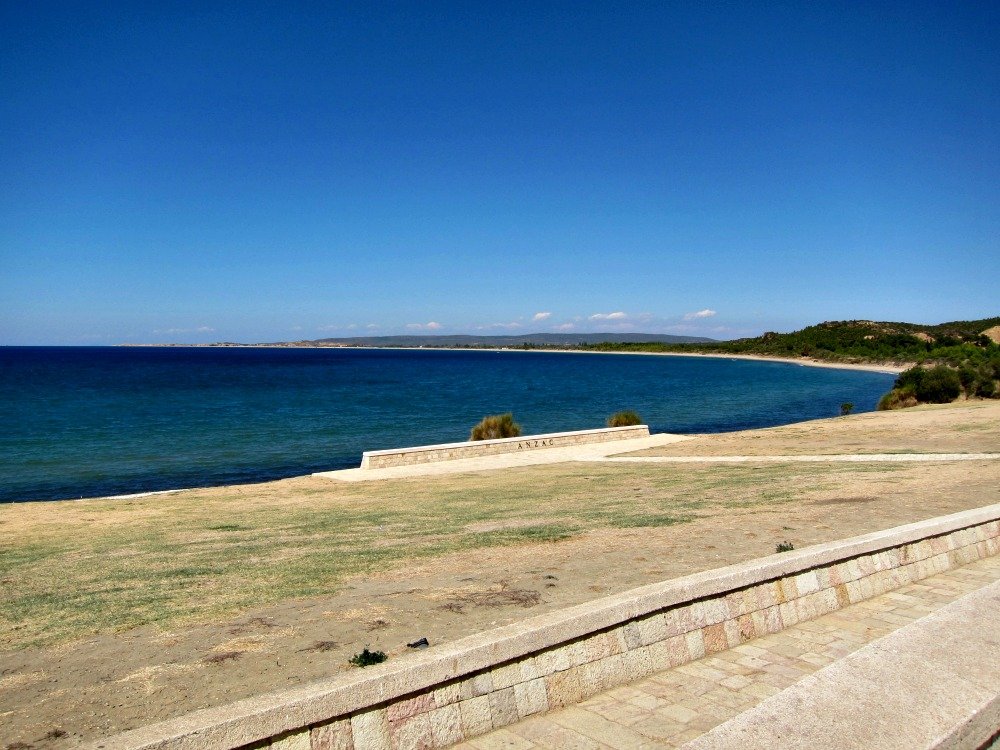 The photo below is taken from the beach side looking up to the commemorative plaques.  Between the plaques and the Sphinx is a grassed area. 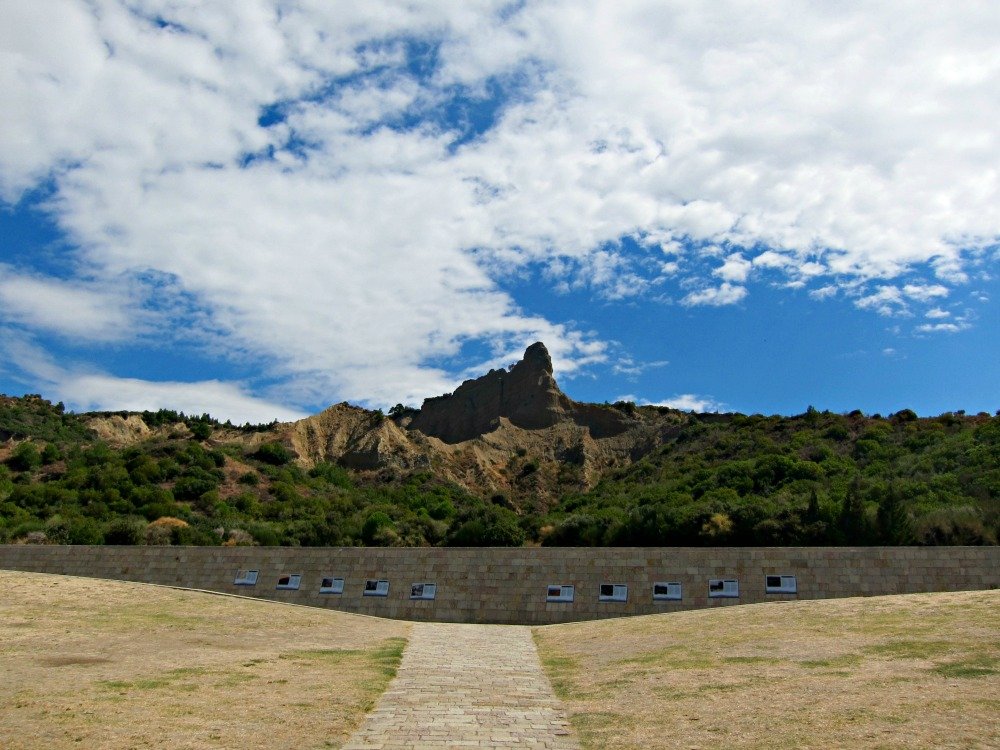 We had the site to ourselves and took time to contemplate and process all we had learned about the events that took place in this beautiful place all those years ago.  It is hard to understand why Wars are fought. 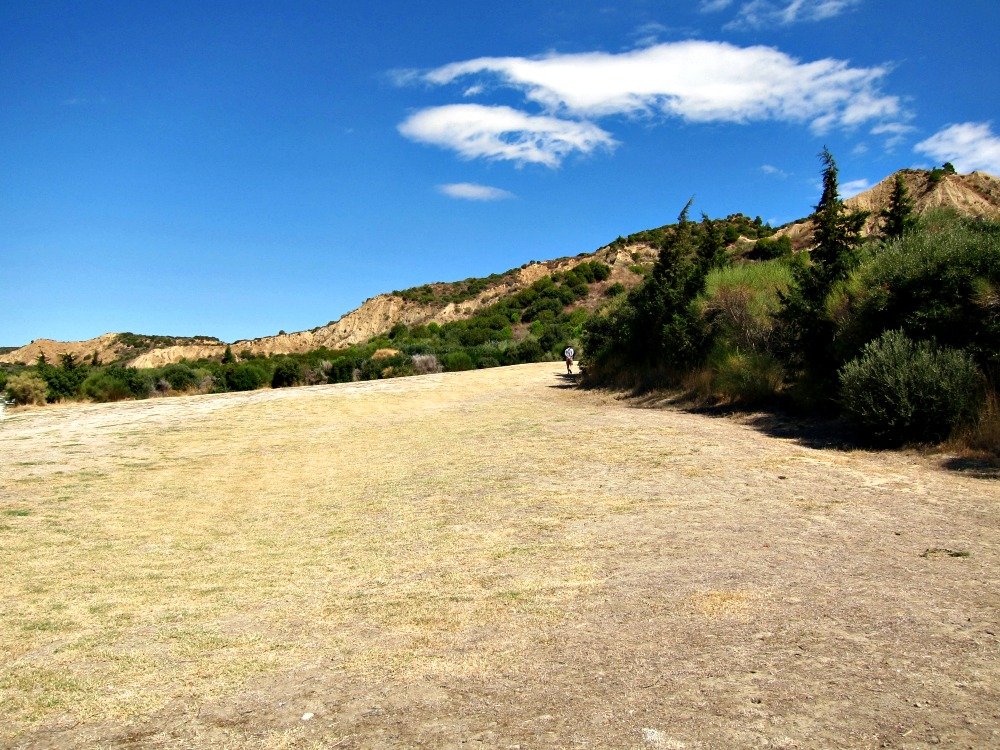 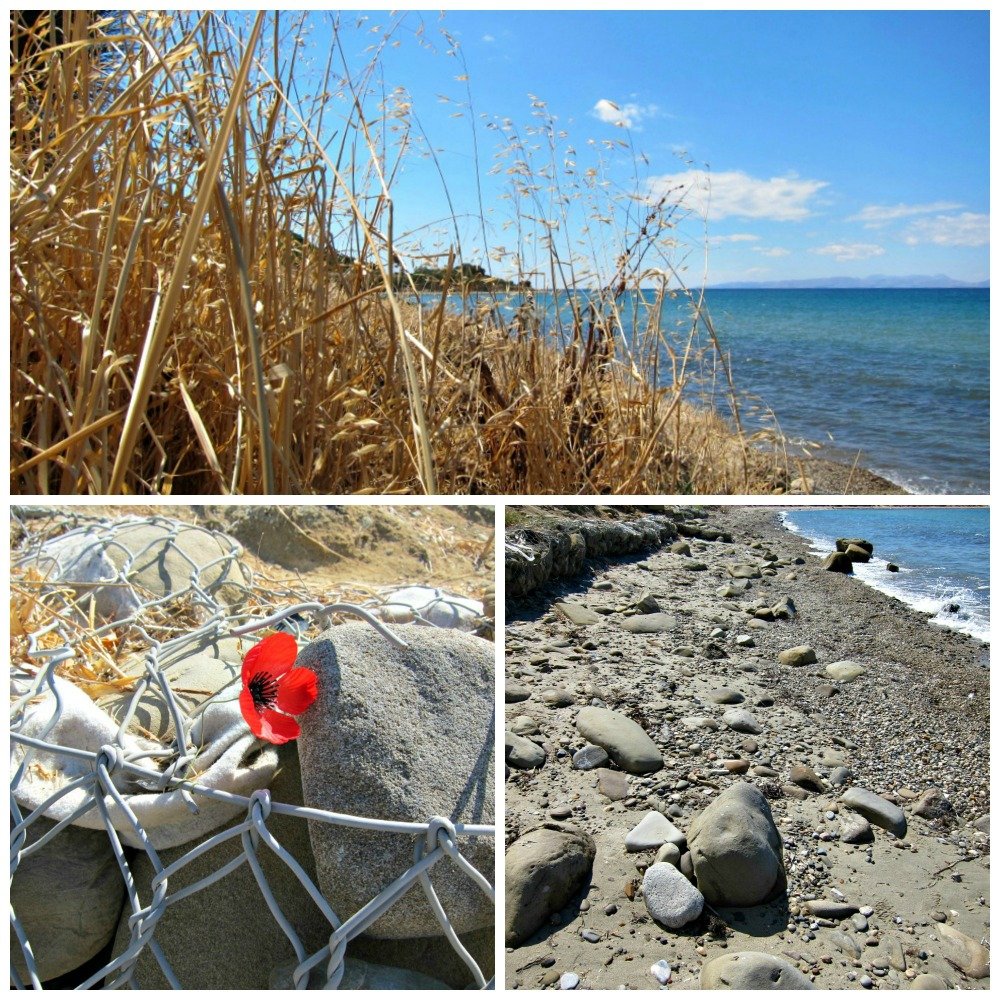 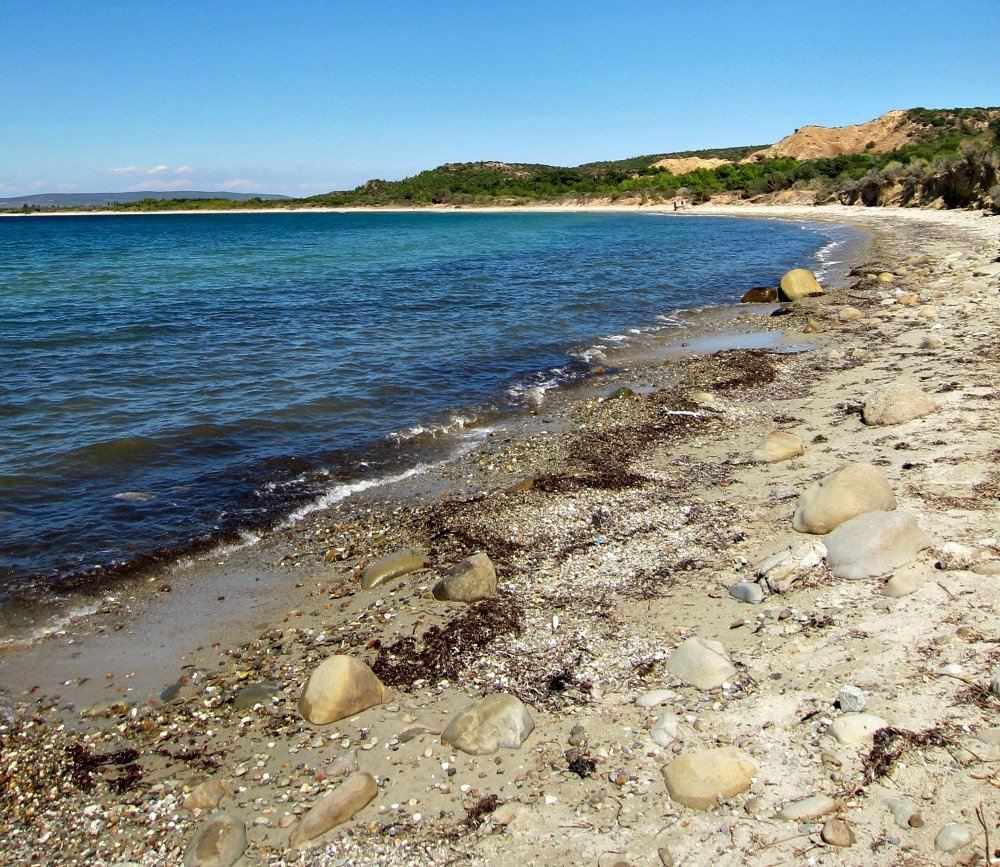 From Anzac Cove we took the one-way circular road to the memorials up on the hill.  The first we visited was the Lone Pine Cemetery for Australian Soldiers.

Back in 1915 the Aussie soldiers used the lone pine that stood up on the ridge above Anzac Cove as a reference point.   Prior to the War there were many more pines but they had been cut to line the trenches of the Turkish Soldiers.  In August 1915 the AIF (Australian Imperial Forces) attacked those Turkish trenches.  They won the battle but not the war.  2000 AIF soldiers and 7000 Turkish soldiers died in the battle.

An AIF soldier collected pine cones from the branches atop the Turkish Trenches and sent the seeds to his mother, one of which was eventually planted at the Australian War Memorial in Canberra.  In a strange twist of fate it turned out that the pine branches atop the trenches were in fact brought in from elsewhere and the pine seed cultivated and planted in Australia in 1934 was an Aleppo Pine, not seed of the Lone Pine in Gallipoli at all.  But we have stuck with the imposter pine and eighty years later it stands 30 metres tall, in honour of the fallen soldiers.

Not only have we adopted the Aleppo Pine but 500 are propagated and sold each year as Lone Pines.  Two have even made the return trip to Turkey.  You can read more about that amazing story here. 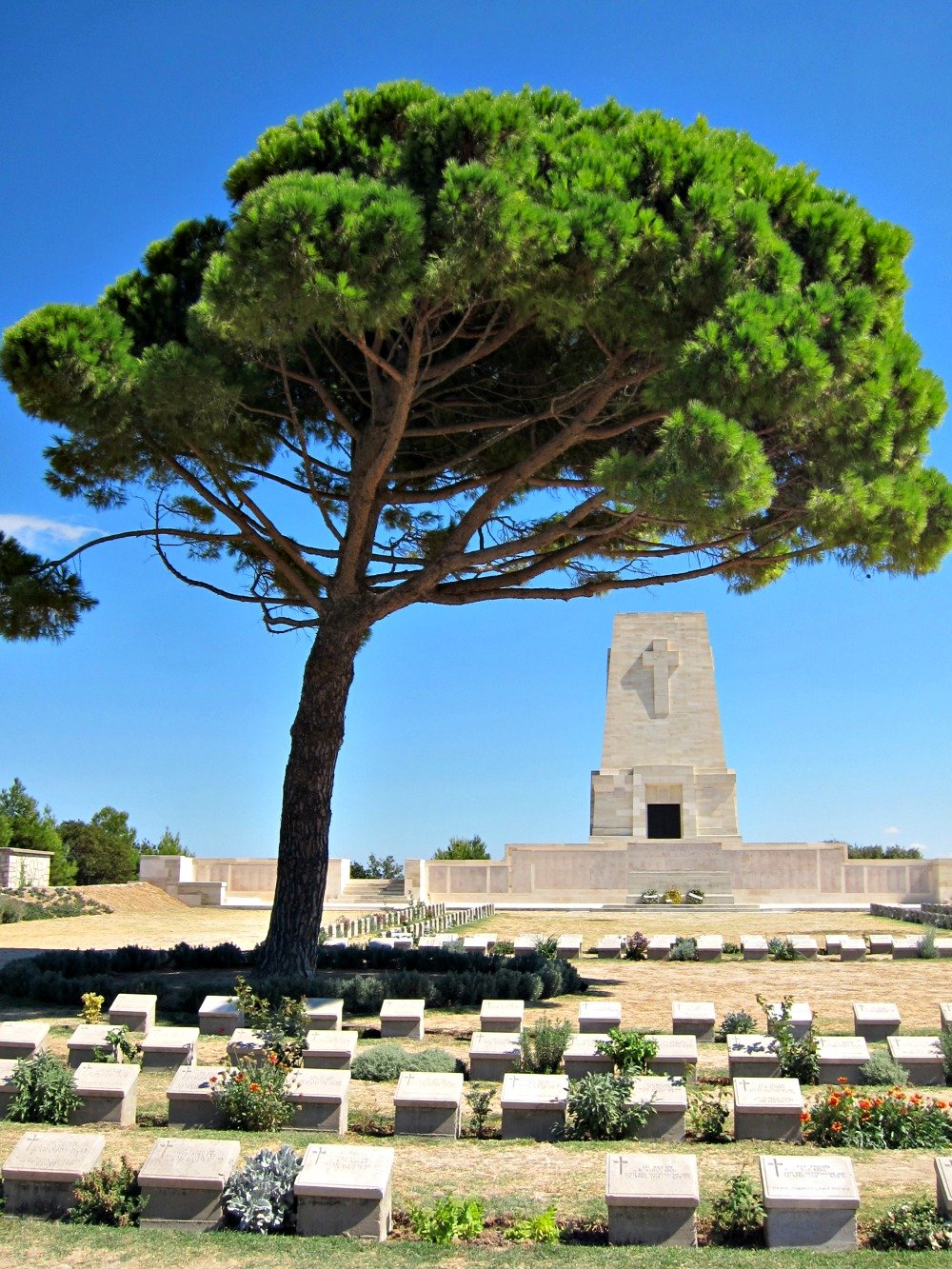 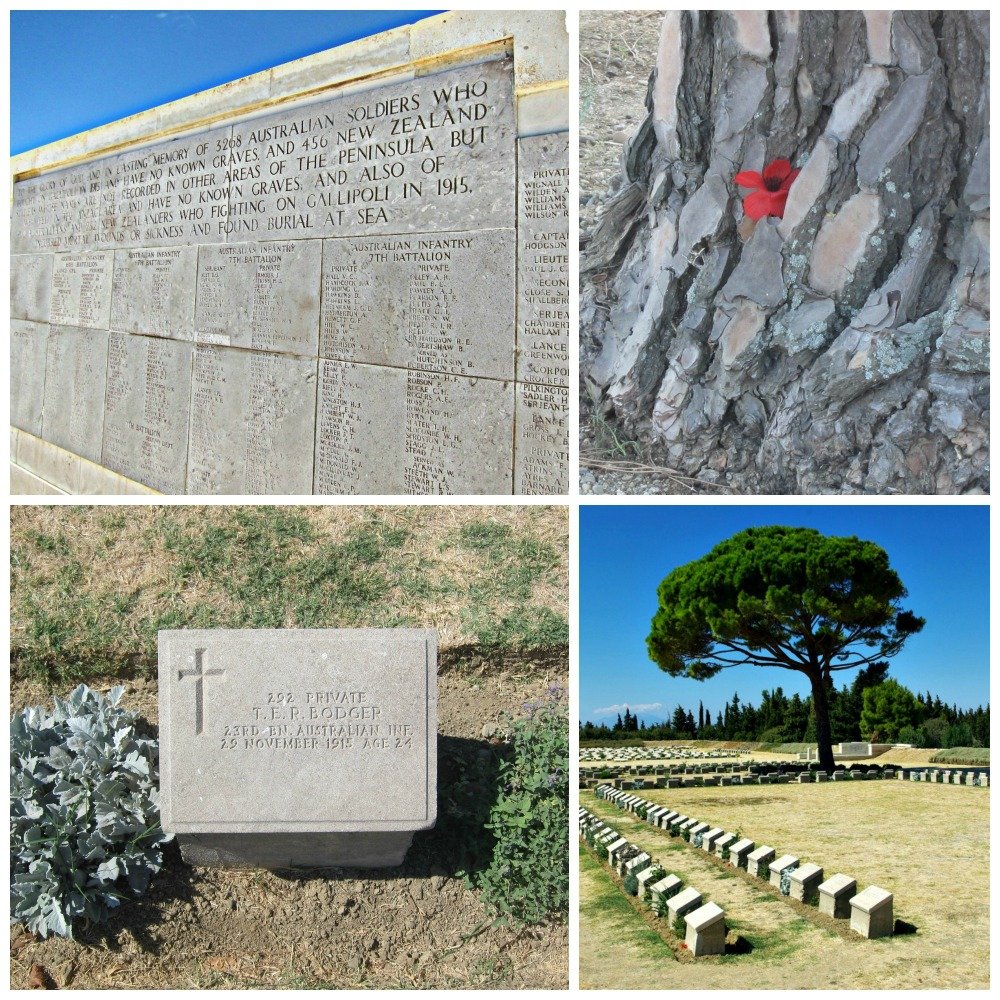 It says a lot about the graciousness of Turkish People that they allow the countries of the Allied Forces to commemorate their fallen soldiers by the placing of Memorials on the Peninsula. 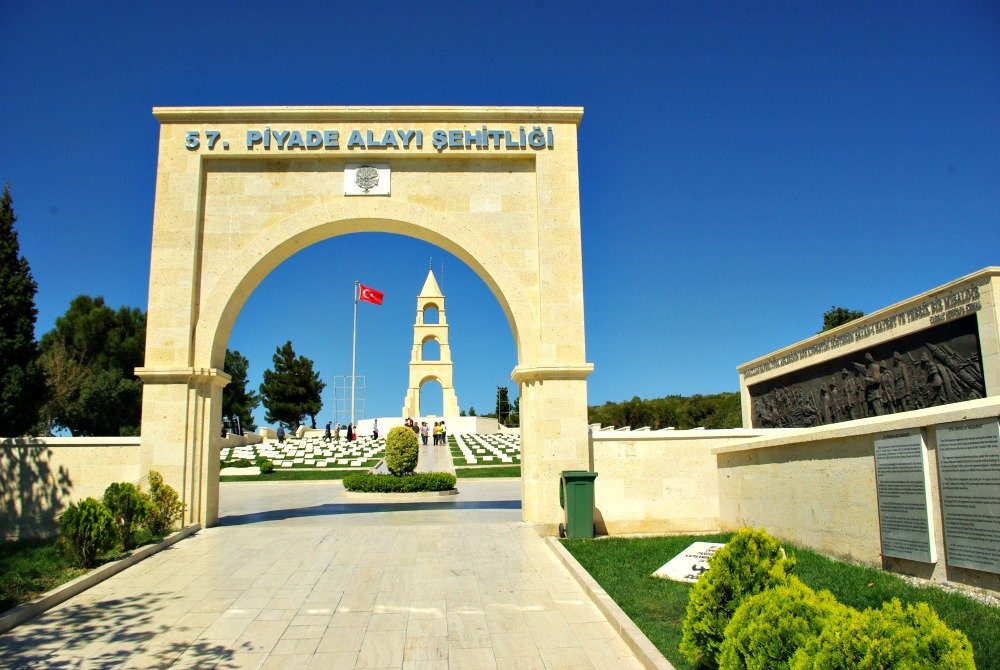 The Turkish people feel strongly about the loss of life on their Peninsula, but today bear no grudges against their then Enemies.  In a wonderful show of hospitality and forgiveness a Turkish family approached me at the Chunuk Bair site near the New Zealand memorial.

The father introduced himself as Turkish and asked my Nationality.  On hearing it was Australian he smiled, shook my hand and welcomed me to Gallipoli.  I felt very humble in the light of such generosity.

The following Attaturk Gallipoli Speech has brought solace to many an Anzac Mother, although it’s attribution to Attaturk himself has been challenged.

Those heroes that shed their blood and lost their lives …

You are now lying in the soil of a friendly country,

You, the mothers who sent their sons from faraway countries,

wipe away your tears; your sons are now lying in our bosom and are in peace.

After having lost their lives on this land they have become our sons as well.

Across the road from the Turkish Memorial are the remnant Gallipoli trenches. A path leads through them. 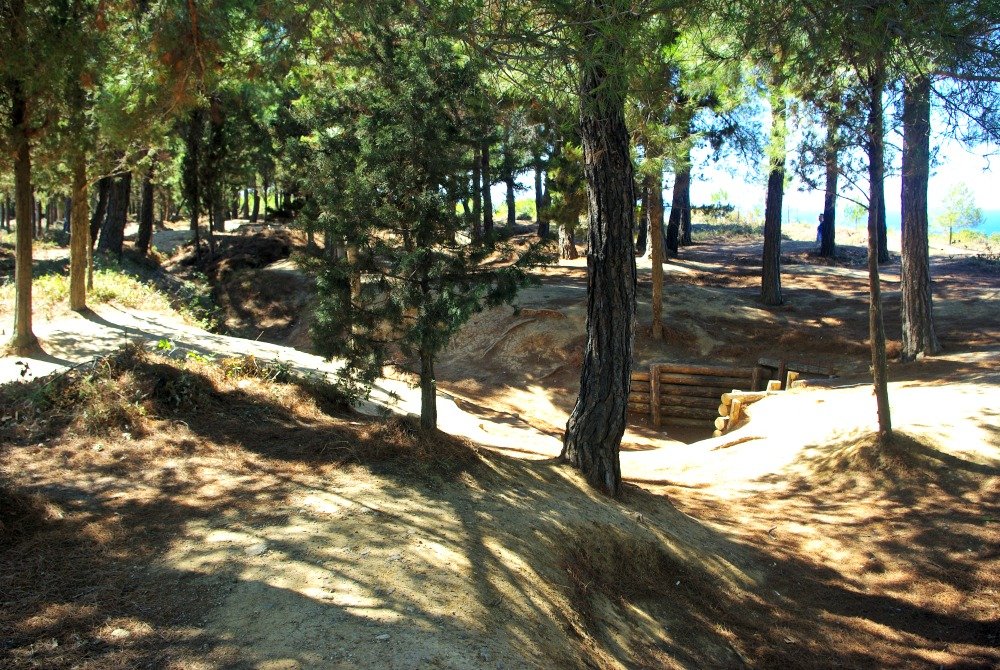 English Translation of the Turkish Words on the below memorial read:

In order to help the British 9th Army Corps landing at Anarfarta district [Suvla Bay] on 6-7August 1915, the Anzac force attacked the Turkish 19th and 16th Divisions, who were defending the Ariburnu front, to hold them there. The units of the 16th Division, in spite of their heavy losses of 1520 martyrs and 4750 wounded during the extremely violent fights, heroically defended Kanlisirt. 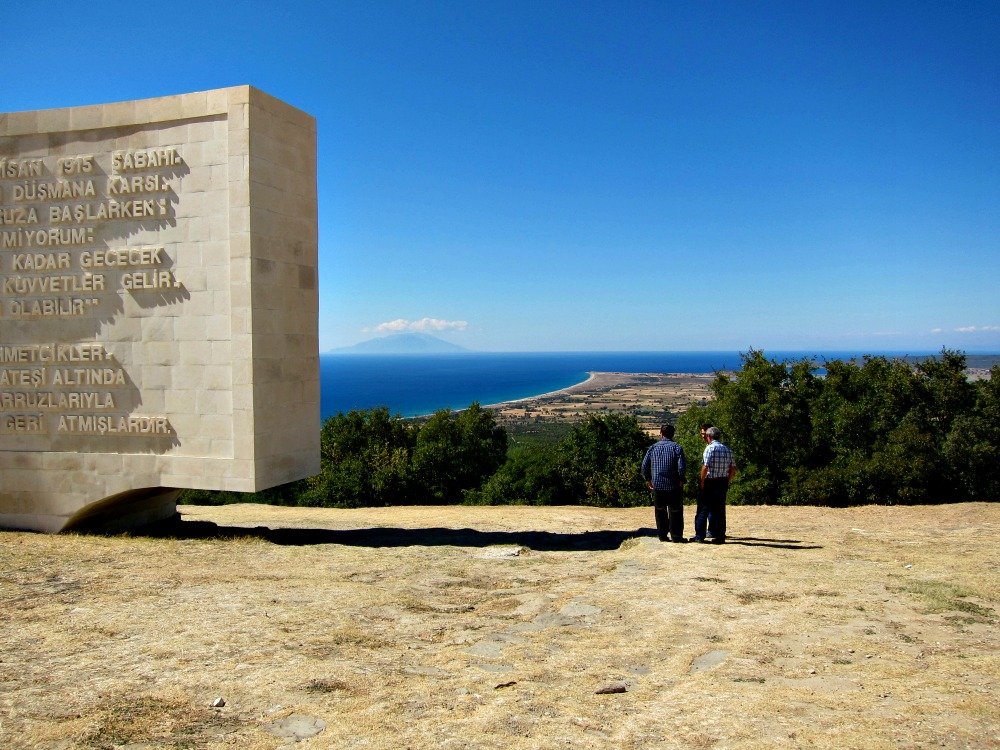 The N.Z. Cemetery (632) and Memorial (850 names) takes it’s name from the southern summit of the central mountain range of the Peninsula. 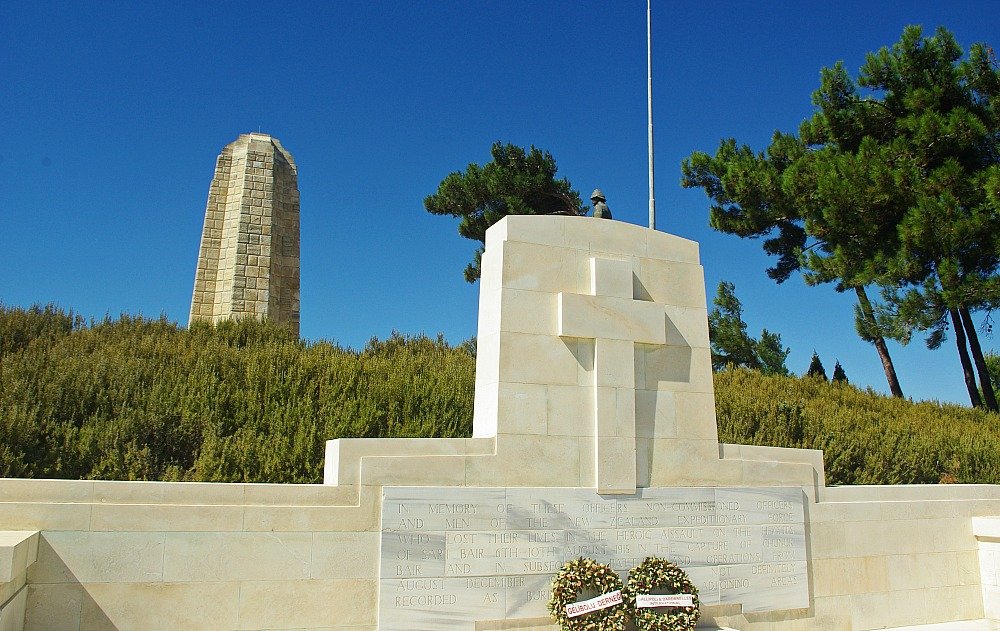 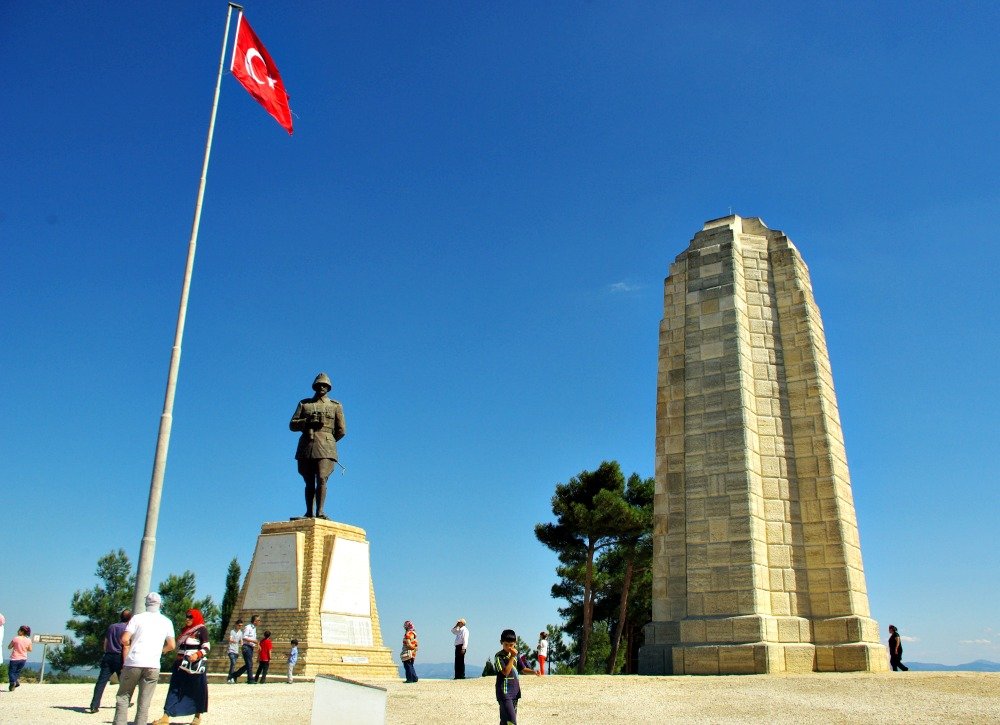 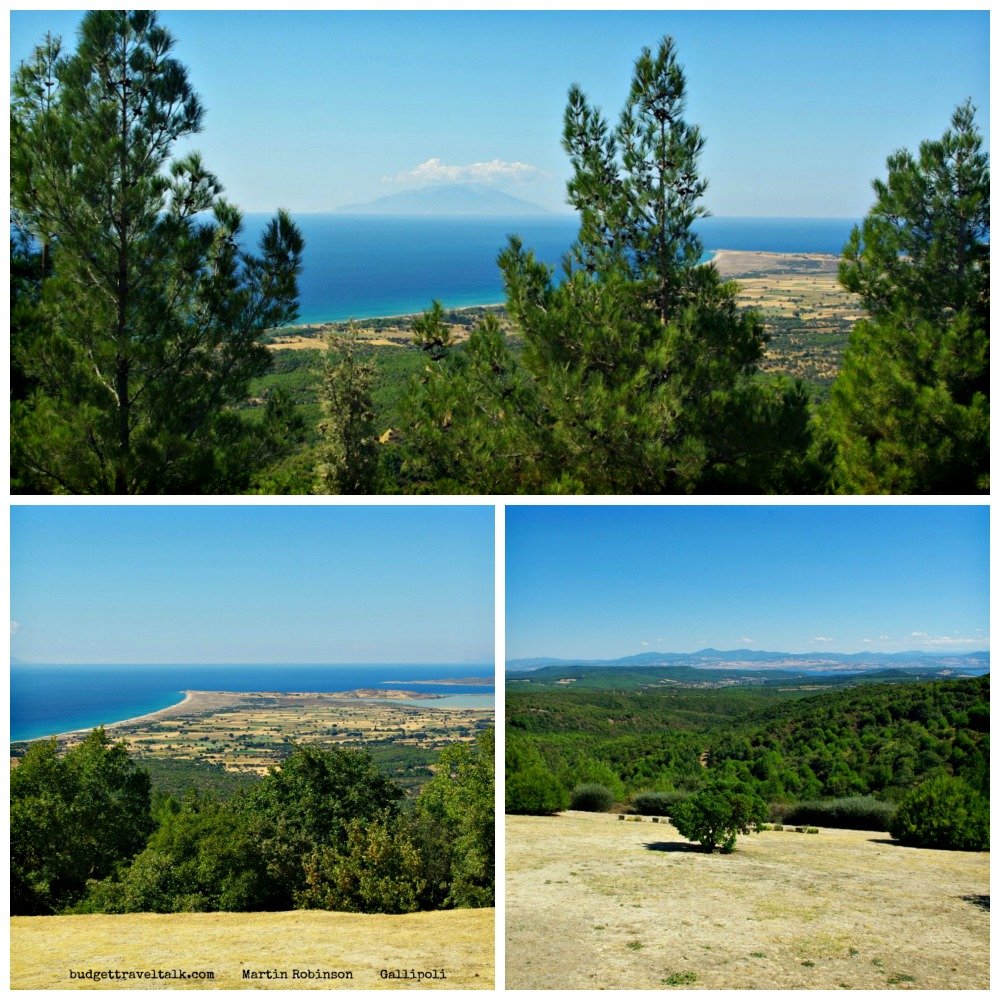 ANZAC is an Acronym for Australian and New Zealand Army Corp.  The ANZAC’s were formed and trained in Egypt during WWI (1915) and while originally destined for France some were instead sent to Turkey.  It was disbanded when the troops were withdrawn, but the ANZAC’s have lived on in the hearts of Australians and New Zealanders.  ANZAC day has grown and evolved to honour all troops who have left our shores and not returned.

Another historically important place to commemorate ANZAC day is at Villers-Bretonnuex, France.  Read Jenny from A Taste of Travel’s  account of the 2013 ANZAC day Dawn Service at the Australian National Memorial in Villers-Bretonnuex here.   Her pre-dawn photo of mist over the headstones gives me goosebumps.

Why did Gallipoli Happen?

The answer to this question lies in the stalemate taking place at Flanders on the Western Front. It was thought that if the Allies could capture the Gallipoli Peninsula, they would in turn take control of the Dardanelles, Sea of Marmara, Istanbul and ultimately the Black Sea. If successful they could then get wheat from Russia for Britian and France and in return deliver munitions.

How to get to Gallipoli

At first we decided not to visit Gallipoli, but then we changed our minds and drove north from Izmir on the west coast of Turkey, to Ayvalik then Cunda Island,  and Bozcaada Island, before finally crossing the Dardanelles at Canakkale.

We recommend staying in Canakkale if visiting Gallipoli independently. We stayed at two excellent places.

The first was Anzac House and then Kervansaray Hotel. Both provided impeccable service. Anzac House helped us by contacting our car rental company and liaising with them to arrange a new vehicle when our first broke down and kindly shifted us to the Kervansaray Hotel, when they had no vacancies for our enforced second night. We have no hesitation in recommending either and would happily stay in either again.

We had time to explore Turkey in a series of road trips, but there are very full day tours available from Istanbul.

Read our best things to do in Istanbul.

Linked as usual to Nancie’s Travel Photo Thursday over at Budget Travelers Sandbox.

Spotlight on Townsville
Next Post: Sunset over Gallipoli and an Instanbul to Gallipoli Day Tour