Because we spent two months without our laptop in Turkey, we got very used to asking for help and directions from strangers.

But Turkish people can never really be classified as Strangers, because they are so incredibly welcoming and helpful.   Even if they can’t speak much English they never shy away like we ourselves might do and if they can’t help you themselves they will find someone else who can.

Because of Government regulations a foreign phone with a Turkish simcard will be barred within a week.  To stop this occurring it is necessary to go to the Taxation Office in Istanbul and pay $100 to get your foreign mobile phone registered.  Then you can buy a local simcard, making sure the phone shop uses your registration number.  Not wishing to go to the expense of purchasing a smart phone, we instead purchased a Turkish Nokia non-smart phone and sim card – $80 combined.  This worked well except we then had no internet connection at all except for wireless on our foreign I Phone with Australian Sim.

Meanwhile our lost laptop had been located by our Son (thanks again Matt) in Brisbane Airport’s lost property office, but we could not be reunited with it due to it’s lithium battery.  It is OK to travel with a lithium battery yourself, but not send it by mail/courier from Australia.  This was a blow because we had re-organized our itinerary to allow us to be in Goreme for it’s arrival at the address of an obliging blogging friend (Captivating Cappadocia).

But there we were in Goreme about to take a walk in the Rose Valley, so of course we asked directions from the ever helpful staff at Kose Pension (a delightful budget friendly place to stay).  However by the time we had made our way to the Goreme-Avanos Road, our recollection of said directions were a little sketchy.

Not to worry – we just walked down the road a bit until we found a gravel road that led by a rubbish dump and cemetery in the general direction of a high bank of distant fairy chimneys. 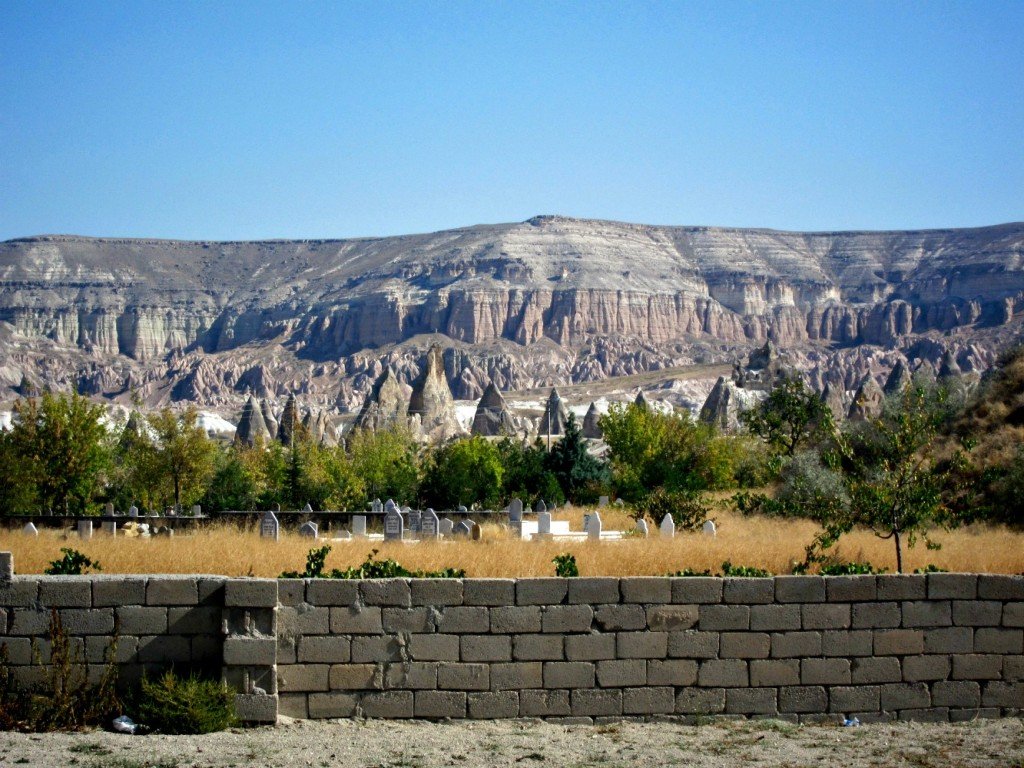 There was another traveller with daypack and a map way ahead of us and a Rose Arrow on a rock, so we relaxed. 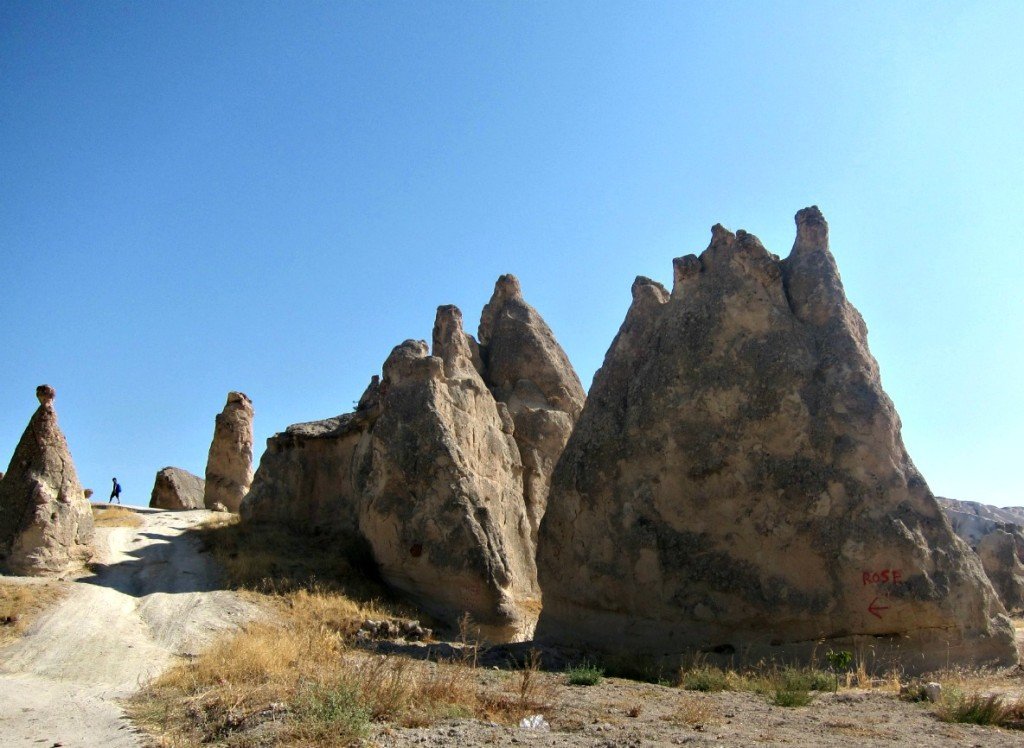 We made our way into the fantasy land of weathered natural formations known as fairy chimneys.  The Rose Valley walk takes 3 hours, but from where we joined it, to Cavusin, 2.5 km away,  took two hours . 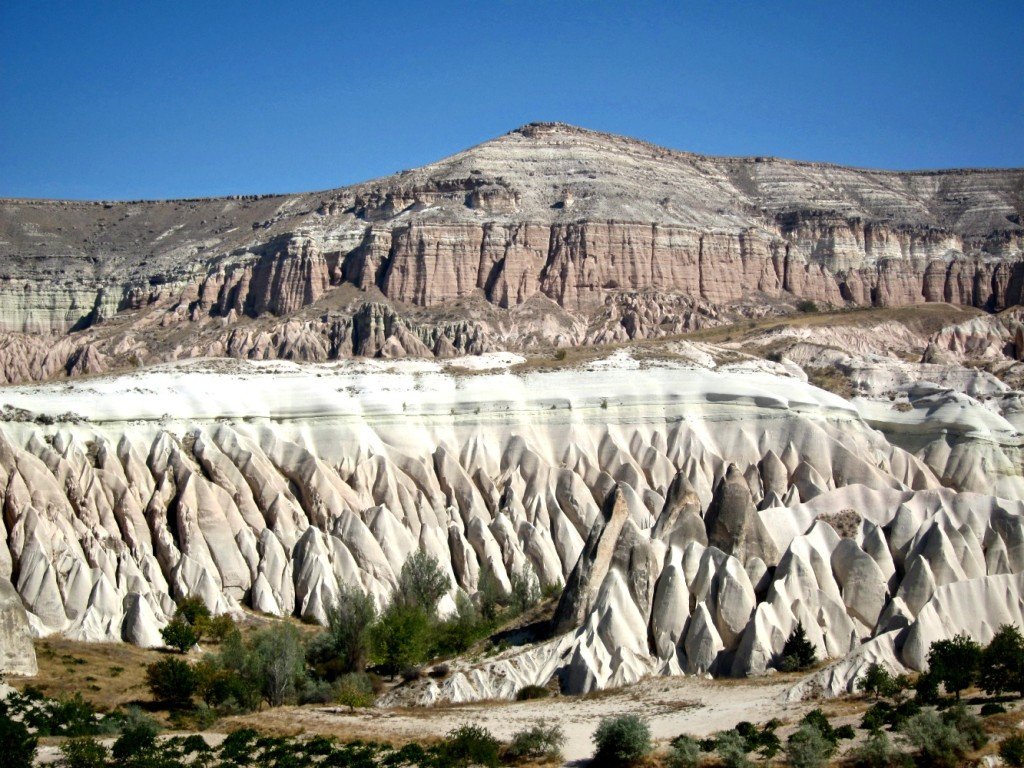 The other worldly panoramas were never-ending.  Every time we rounded a corner there would be something else amazing.    We were in awe of the vast quietness of the landscape. Chirping Willy Wag tails posed and flitted, followed by flocks of swift sparrow like birds.

It was easy to imagine we were the original intrepid explorers discovering these treasures – apart from the numerous Rose signs pointing the way and that Aussie/Kiwi couple on mountain bikes that stopped for a chat, that is! 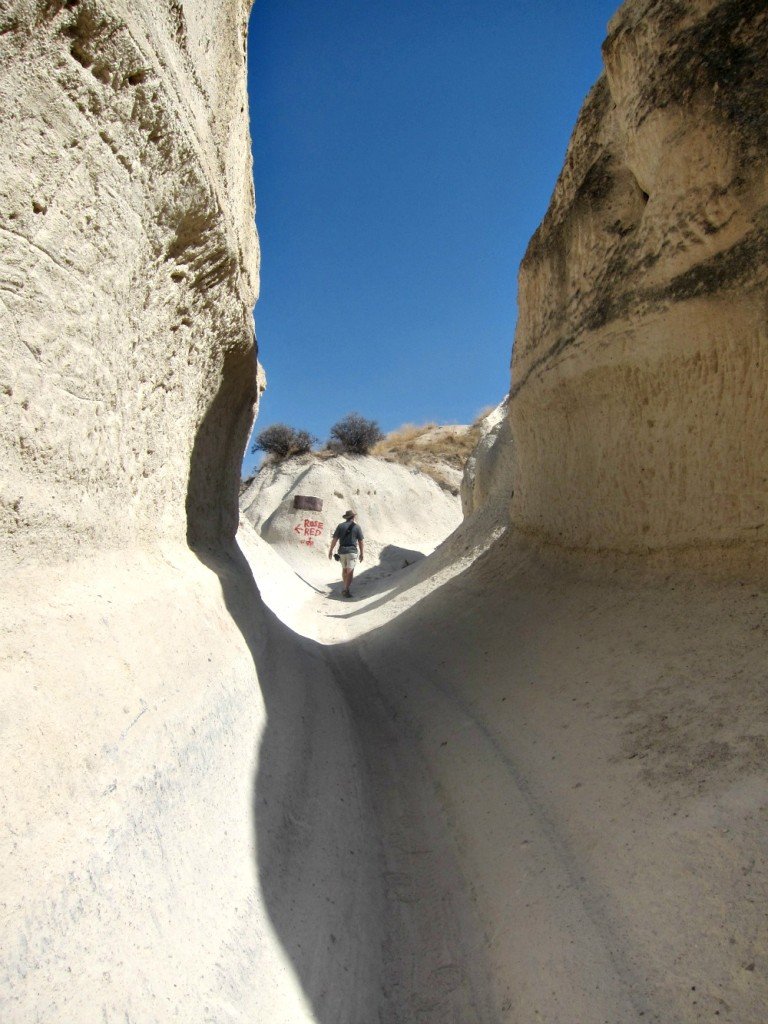 B.H. went ahead on an exploratory mission behind one of the fairy chimneys and wouldn’t you know – he found an entrance into an abandoned home. 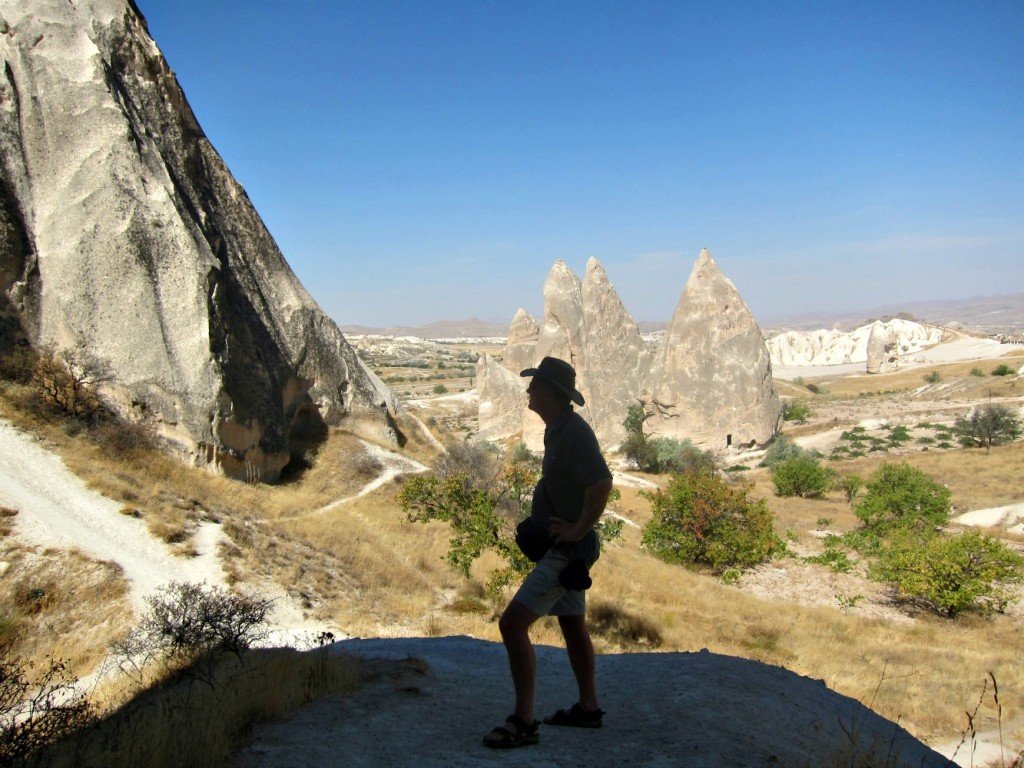 We spent a long time outside the fairy chimney just looking.  We didn’t want to break the silence – being in such places is what travel is all about for us. 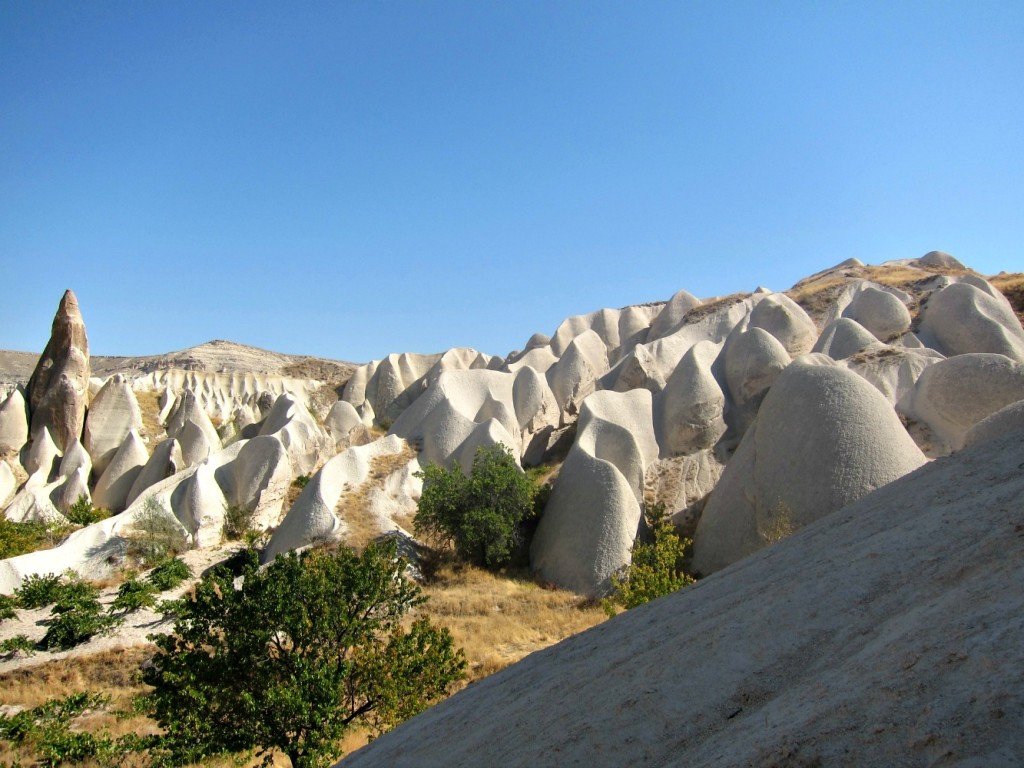 Windows and doorways peeked out of Rapunzel-like dwellings all over the place – but they were not always accessible – some required ladders or had closed doors.

The open air museum in Goreme has many churches on display, but there are also churches spread throughout the valleys.  We stumbled upon this one. 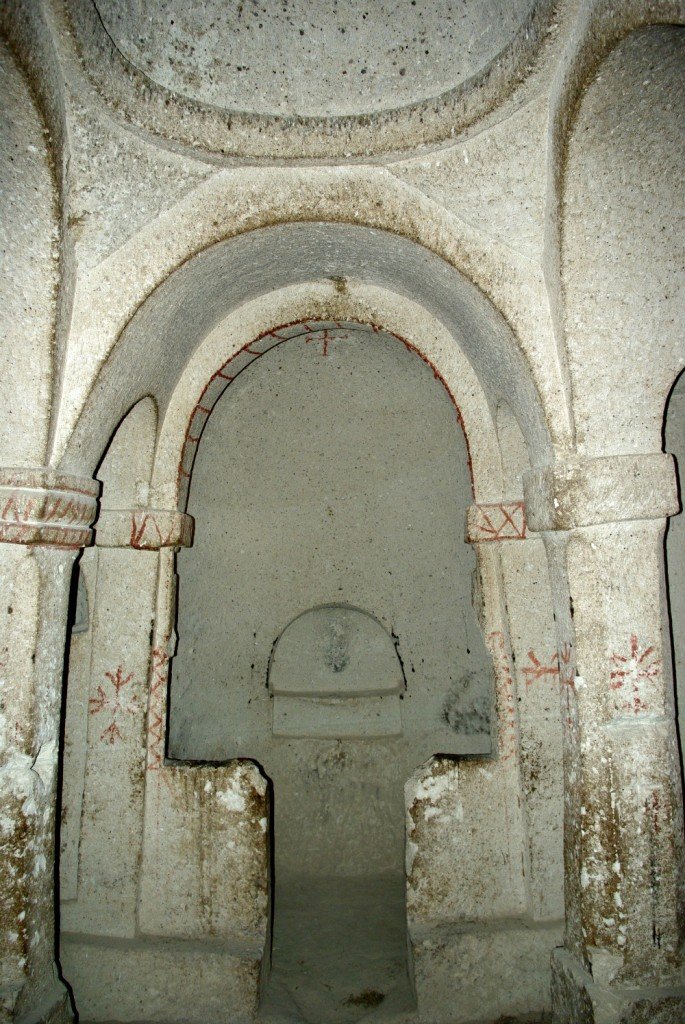 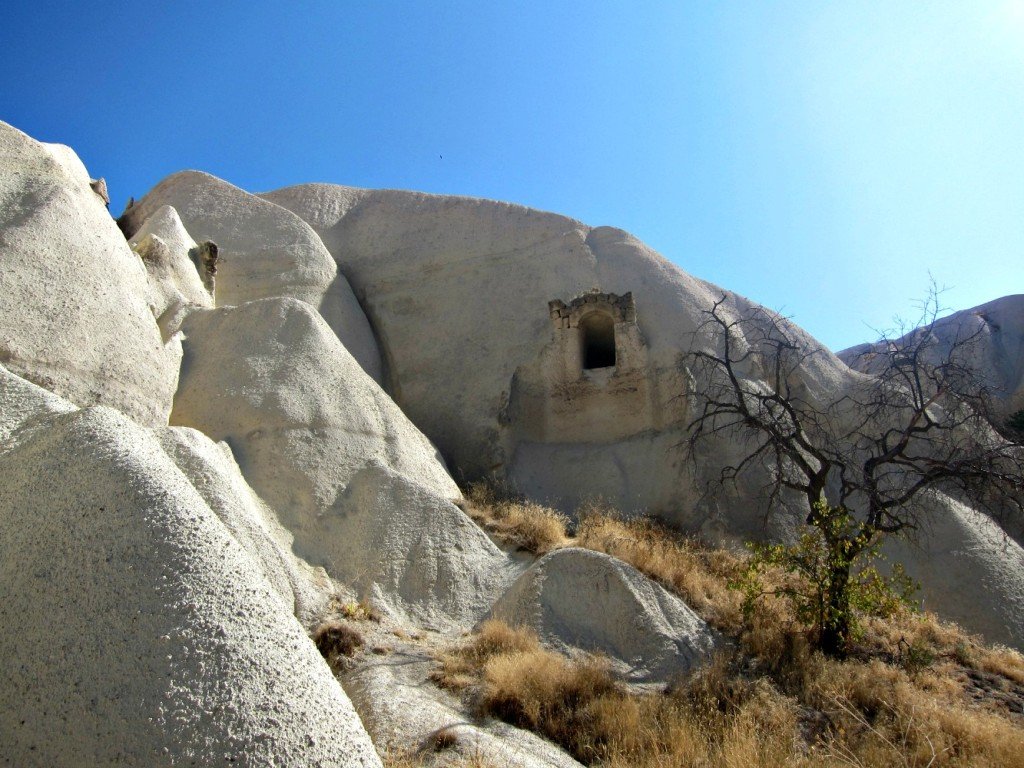 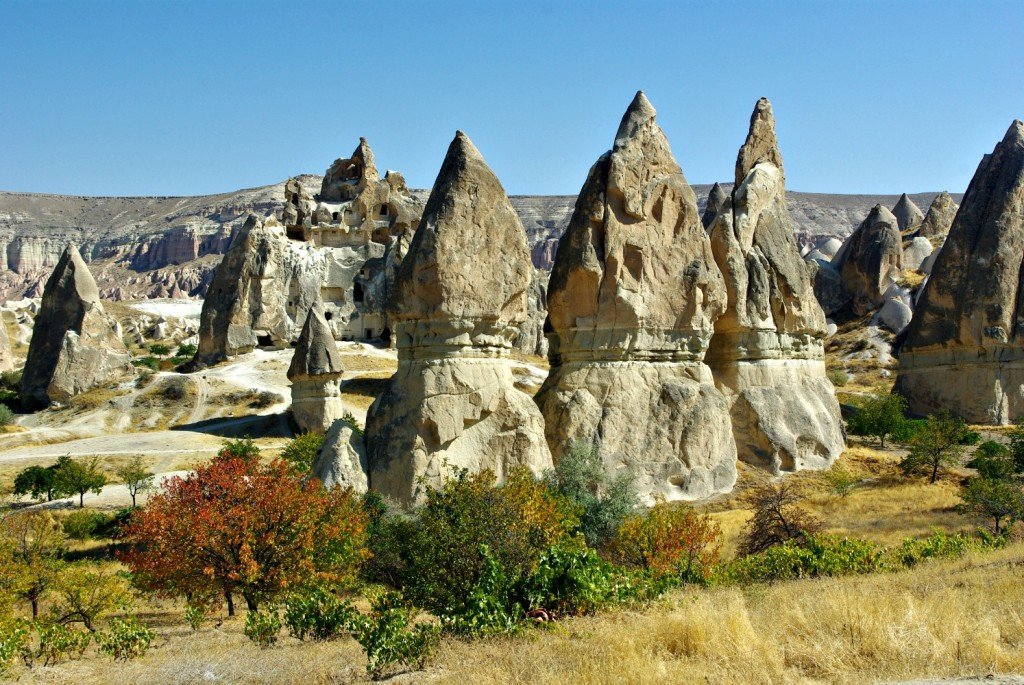 The last part of the walk to Cavusin  was less interesting scenery wise but we were able to watch farmers working on low growing vines and melon crops.  However, there was no ducking into the cool shade of the chimneys and the track turned into fine white powder that made me wish I had worn joggers instead of the Taos walking sandals that I lived in. 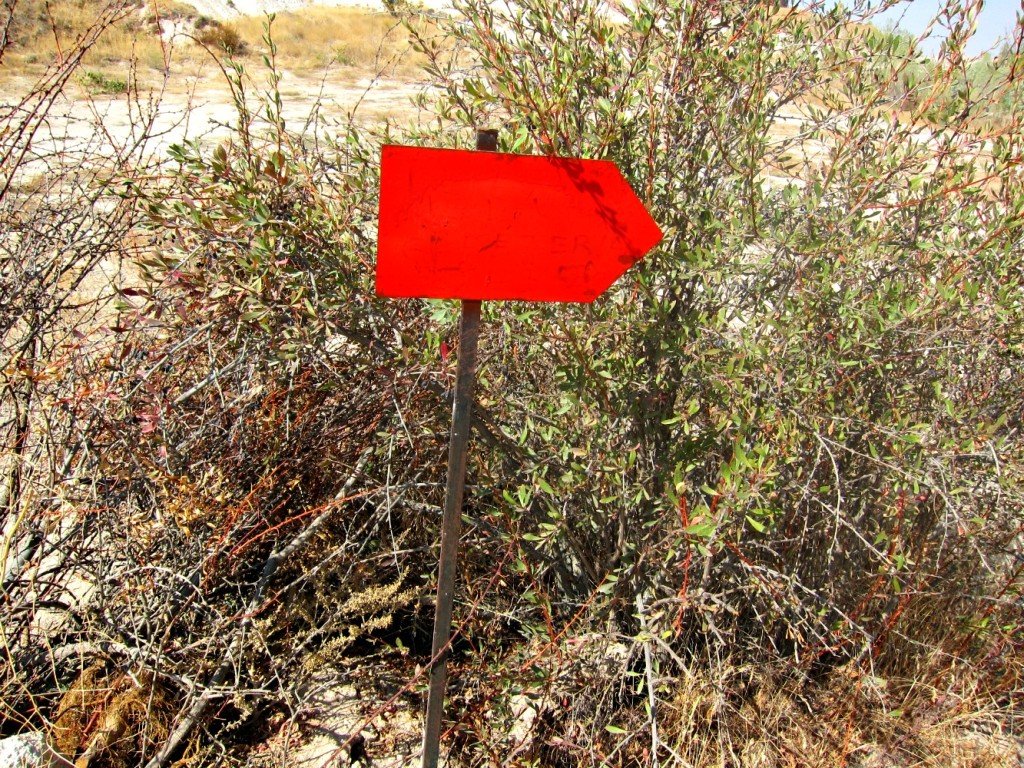 Lunch in Cavusin was a welcome respite from the heat.

A Tea House owner called out an invitation as were walking out of Cavusin, and so we joined some old men in the shade to indulge our fast growing tea habit.  We just loved the occasion of tea drinking in Turkey and although they were only tiny, we had about six glasses a day each.  I even shed a lifetime habit of milk in my tea whilst in Turkey.

Originally I had planned to include photos of Cavusin and it’s cave dwellings, churches, mosques and the huge rock that stands above the town in this post, but it became a monster.  Best left for another post! 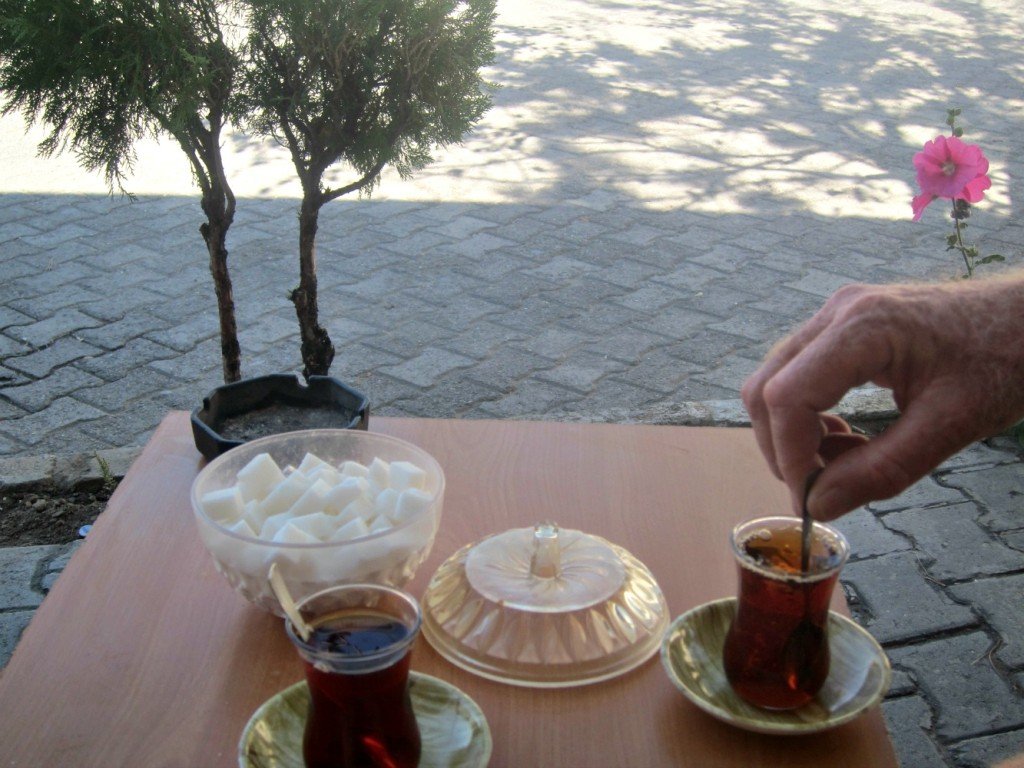 It was lucky that we did stop for that tea because it turned out that our host knew exactly where we could catch the bus back to Goreme and at what time it departed.

Have I mentioned how helpful Turkish people are?

For more travel photos pop over to BUDGET TRAVELERS SANDBOX.

The Lesser Known Dalyan of Turkey can be found on the Biga Peninsula
Next Post: Tuesday in Townsville – Skydive