Fort George was built in 1812 as the British answer to Napoleon’s advances in the Mediterranean. I doubt that Captain Henryson and his band of Vis Islanders imagined, when constructing the fort, that within a few years the British would abandon it and some two hundred years later it would be operating as an events venue and night club. I’m totally jealous that clubbers on Vis get to party the night away at such a splendid place. 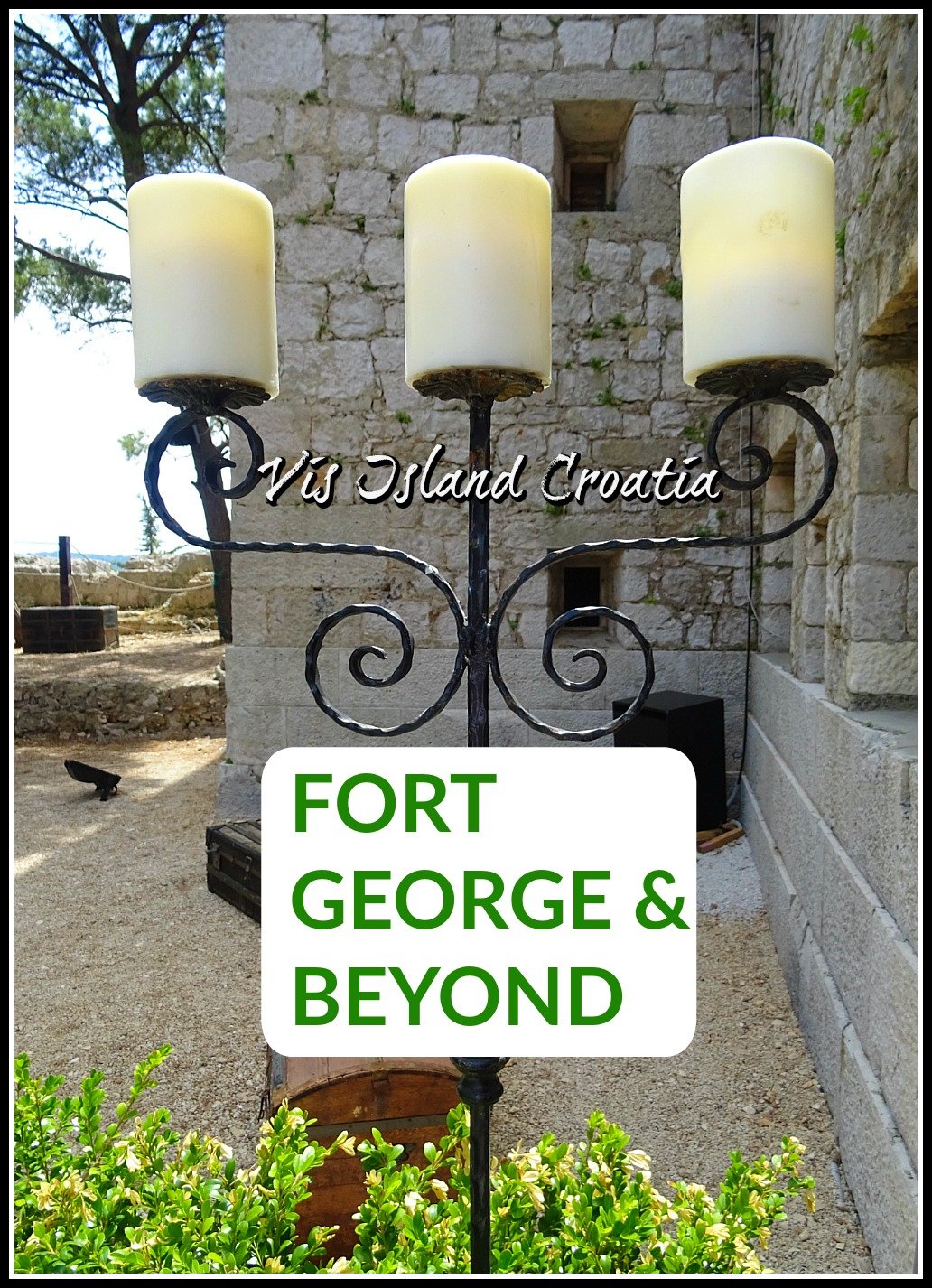 Seriously! It was impossible to fit everything about Vis island into last week’s post and there will be more posts after this. Today I’m sharing photos of the fort and beyond to Rogačić Bay and Parija cove – the land approach to the submarine pen that can also be visited by boat. 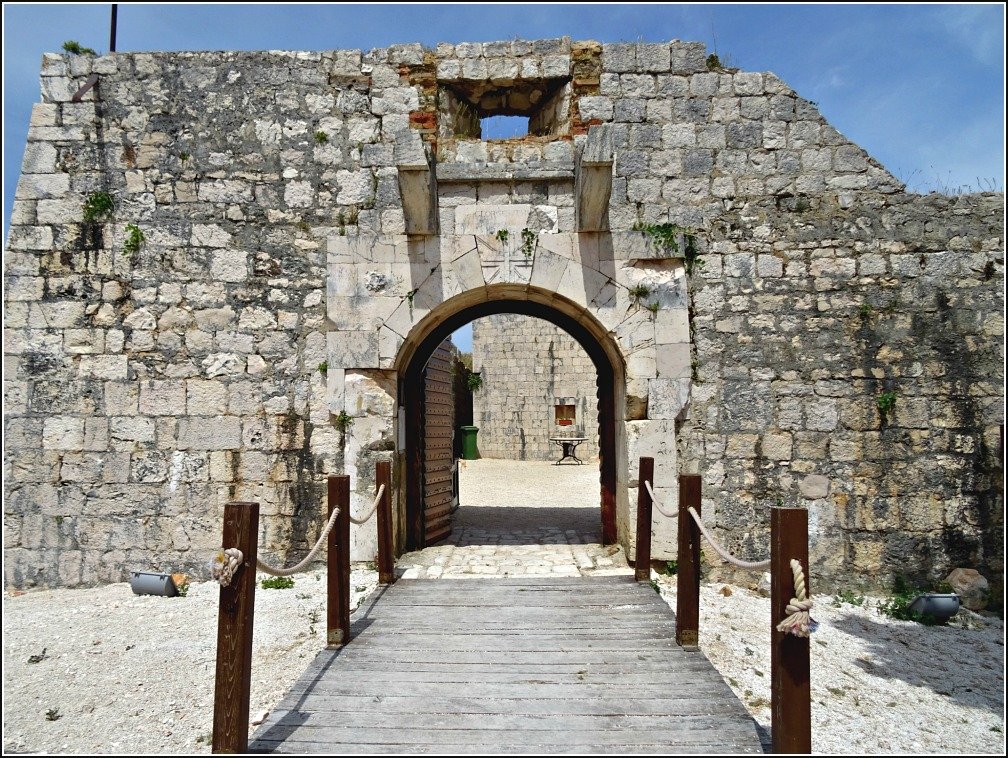 The drive from Vis Town to Parija is all green trees and bleached rocks, with the ever present opportunity to glimpse the startling blue ocean. It can be walked, but the hills and surprisingly hot Spring sun left the few walkers we saw, looking red and bothered. 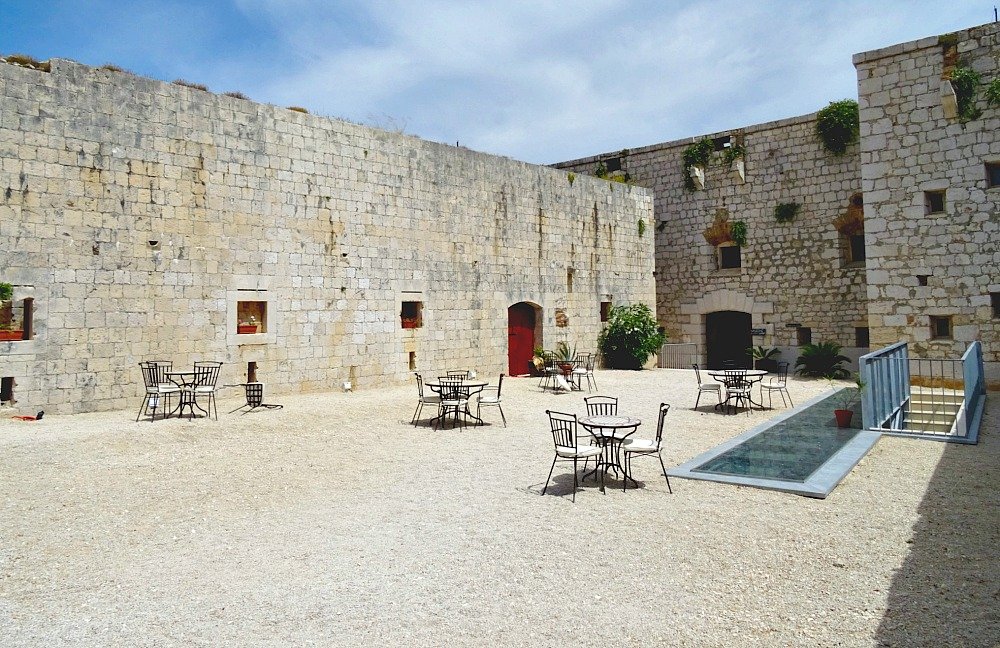 Caper bushes grow at every opportunity on Vis Island. 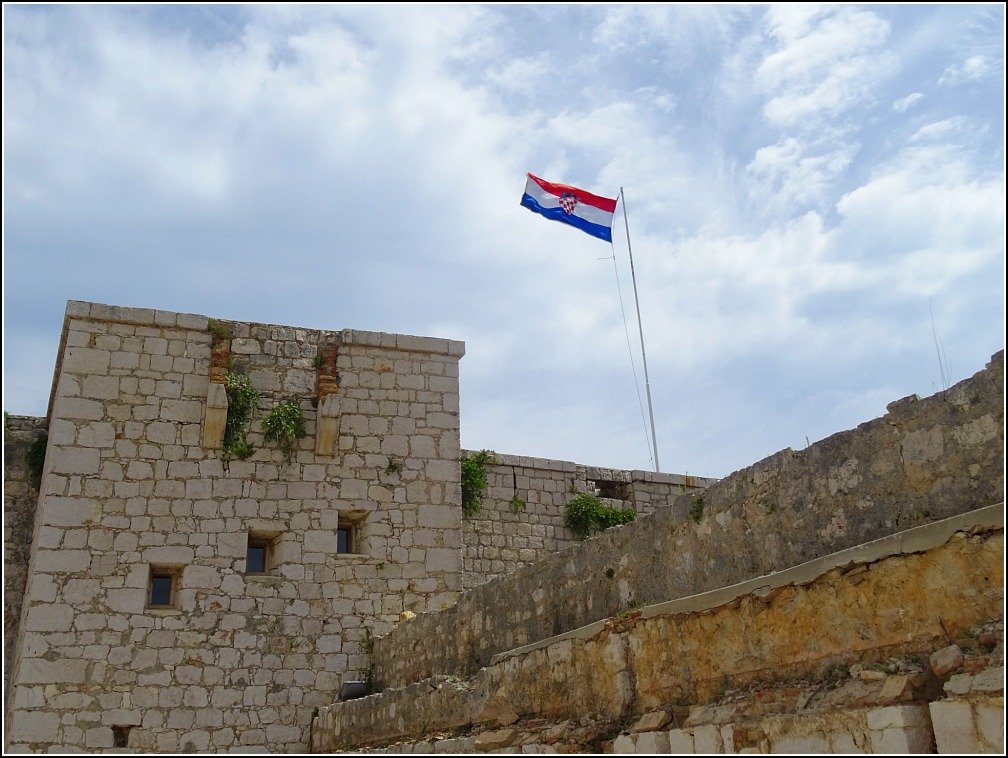 The roof terrace has views toward Lućica peninsula that hides Grandovac Bay on the Kut side of the harbour. 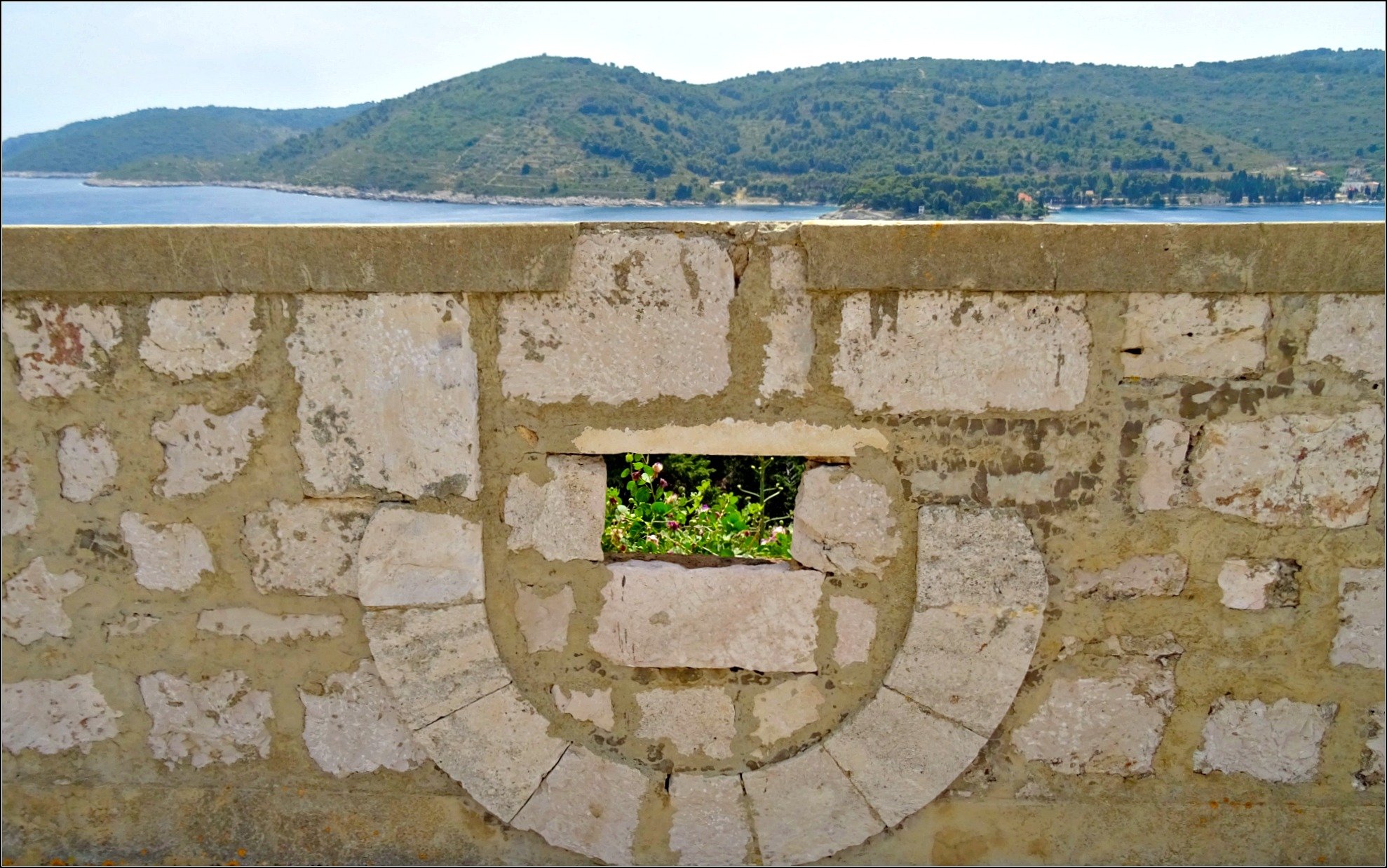 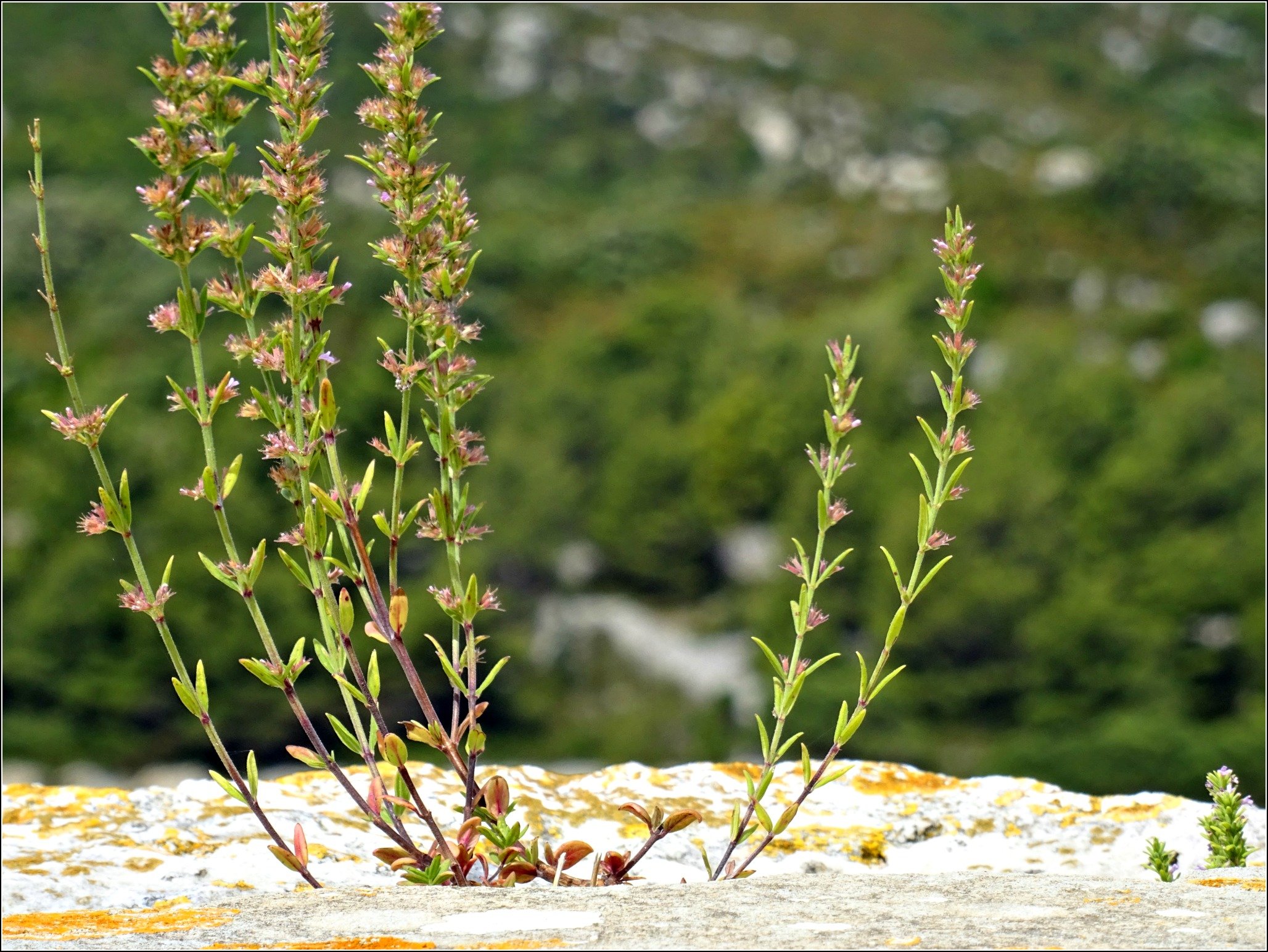 It is possible to call in, explore the fort and stay for a cool drink or a coffee. Unfortunately the coffee machine was out of order during our visit, but it was difficult to be disappointed with views like this one toward Rogačić and Parija.

The Roof terrace would be a lovely venue for a private party, but this day it was a stark walled space with great views. Soon we were back down the stairs and emerging from a stone tunnel, through arches to the garden bar and water framed peninsula. Another room housed an art display which was also closed. 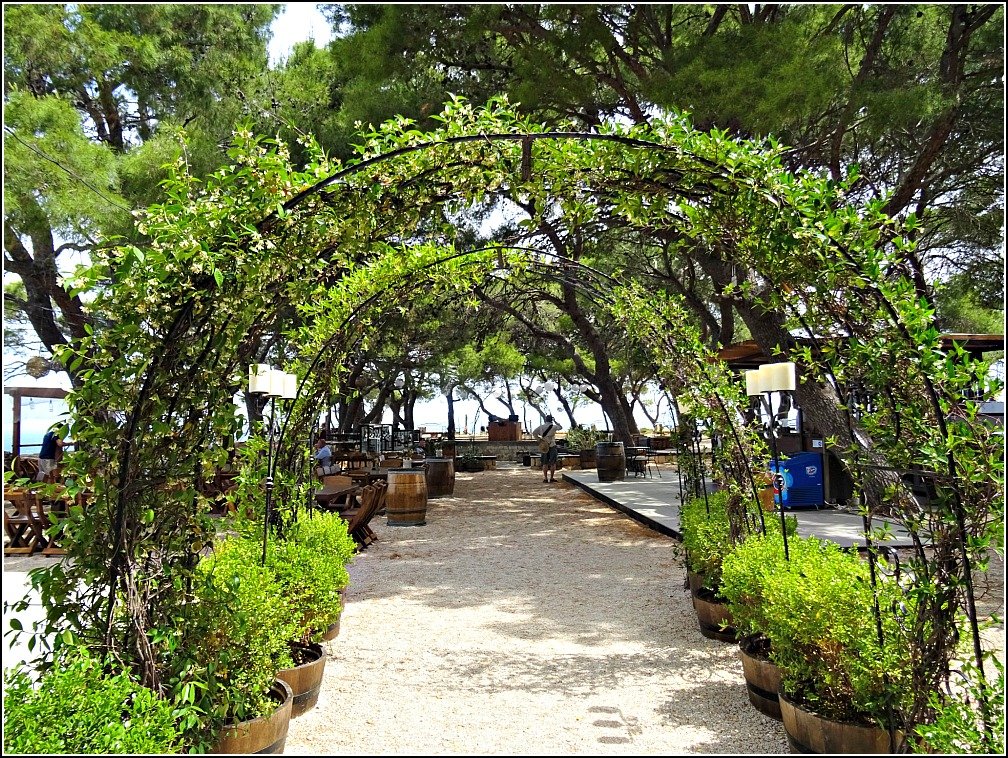 The eclectic furnishings of the garden bar were intriguing, although a little rough in the harsh light of day. I can only imagine their ambience by the light of the moon. 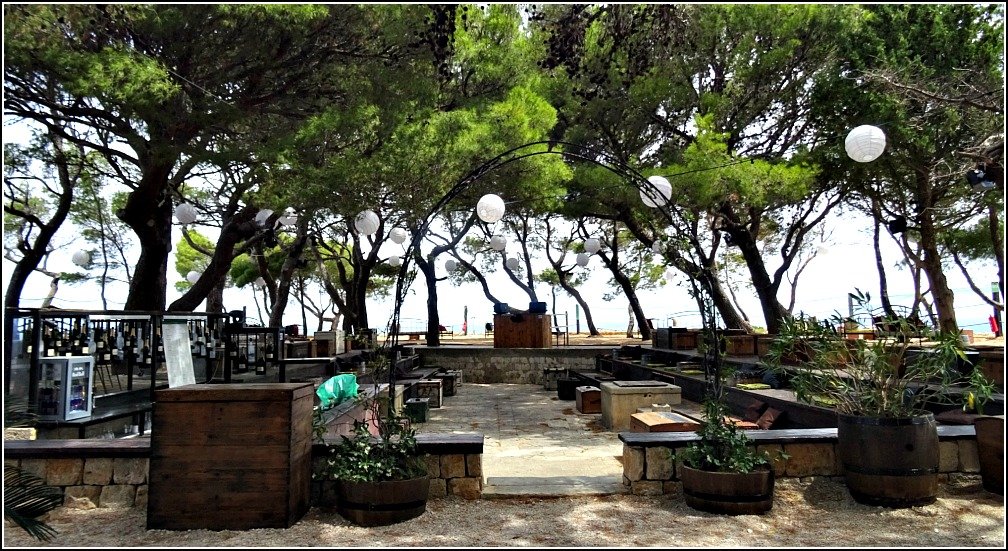 The central sunken bar is ringed by individual sitting areas. Can you imagine an afternoon session here with a group of friends? 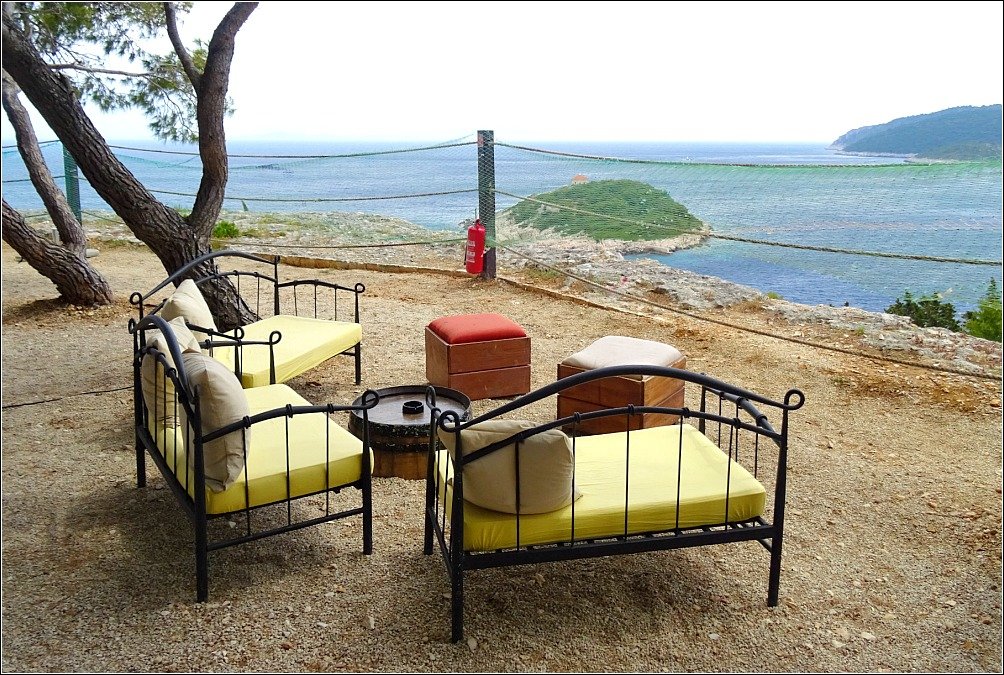 Or dinner in this idyllic setting? I think the hanging bottles might contain light bulbs. 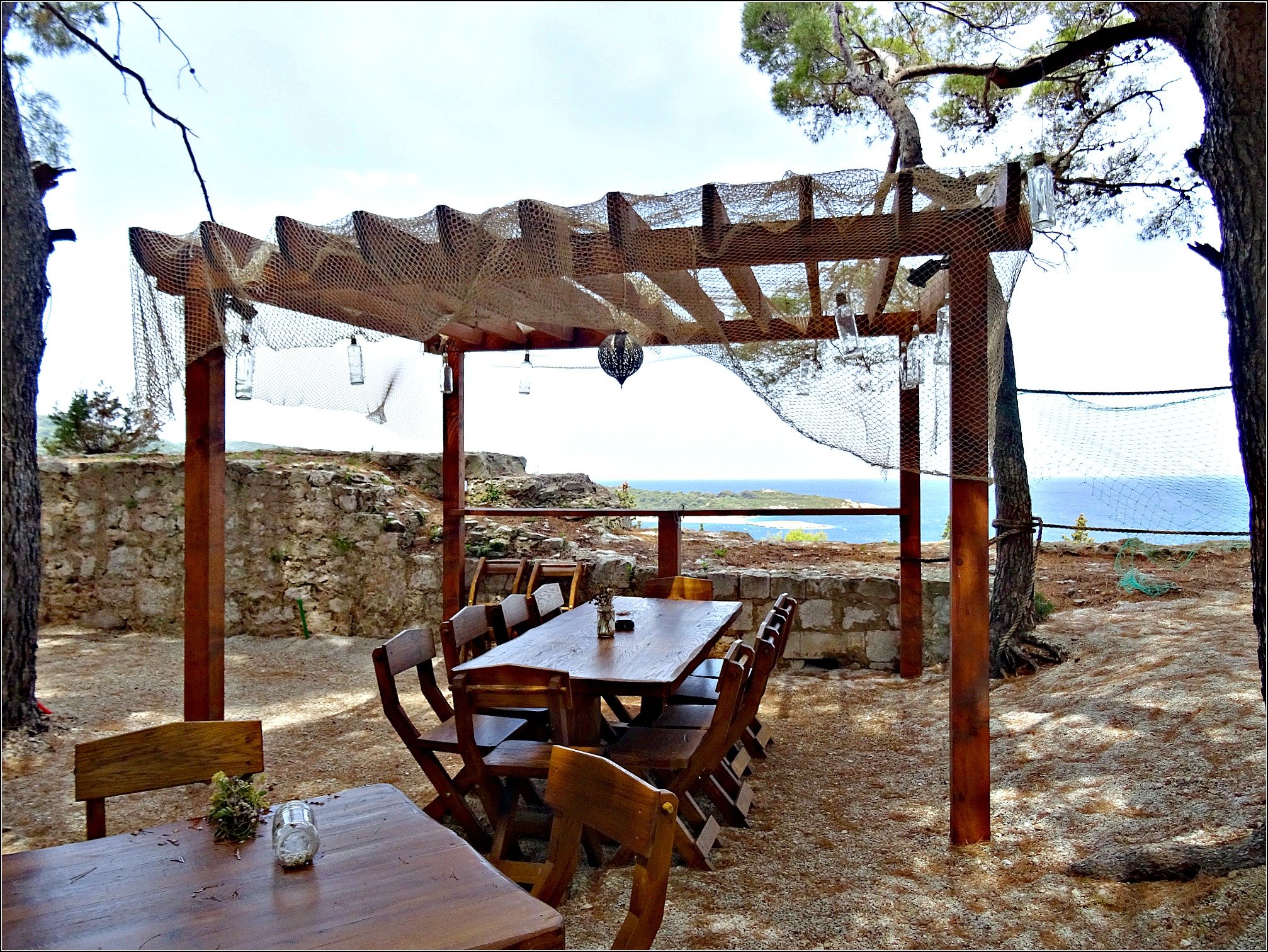 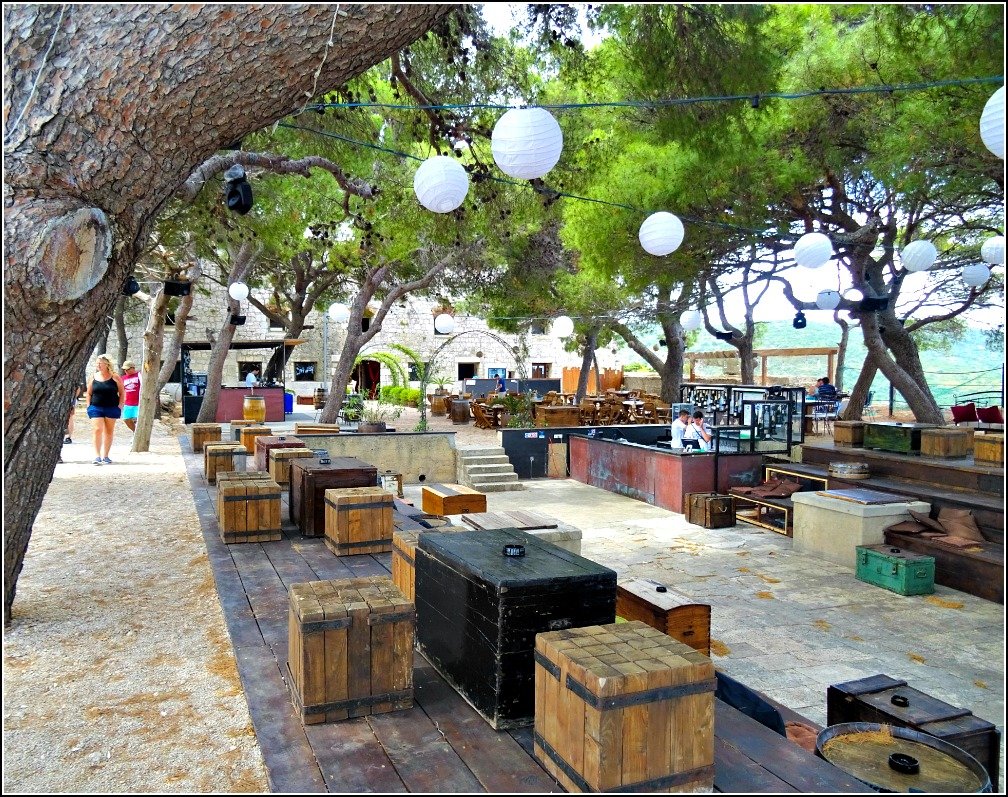 Next on the agenda was the Rogačić road through Parija to the submarine pen. All up the route is 5.9km from Vis Town including the detour to the fort – see the map below.

The FKK symbol indicates a nudist beach in Croatia, so be warned. 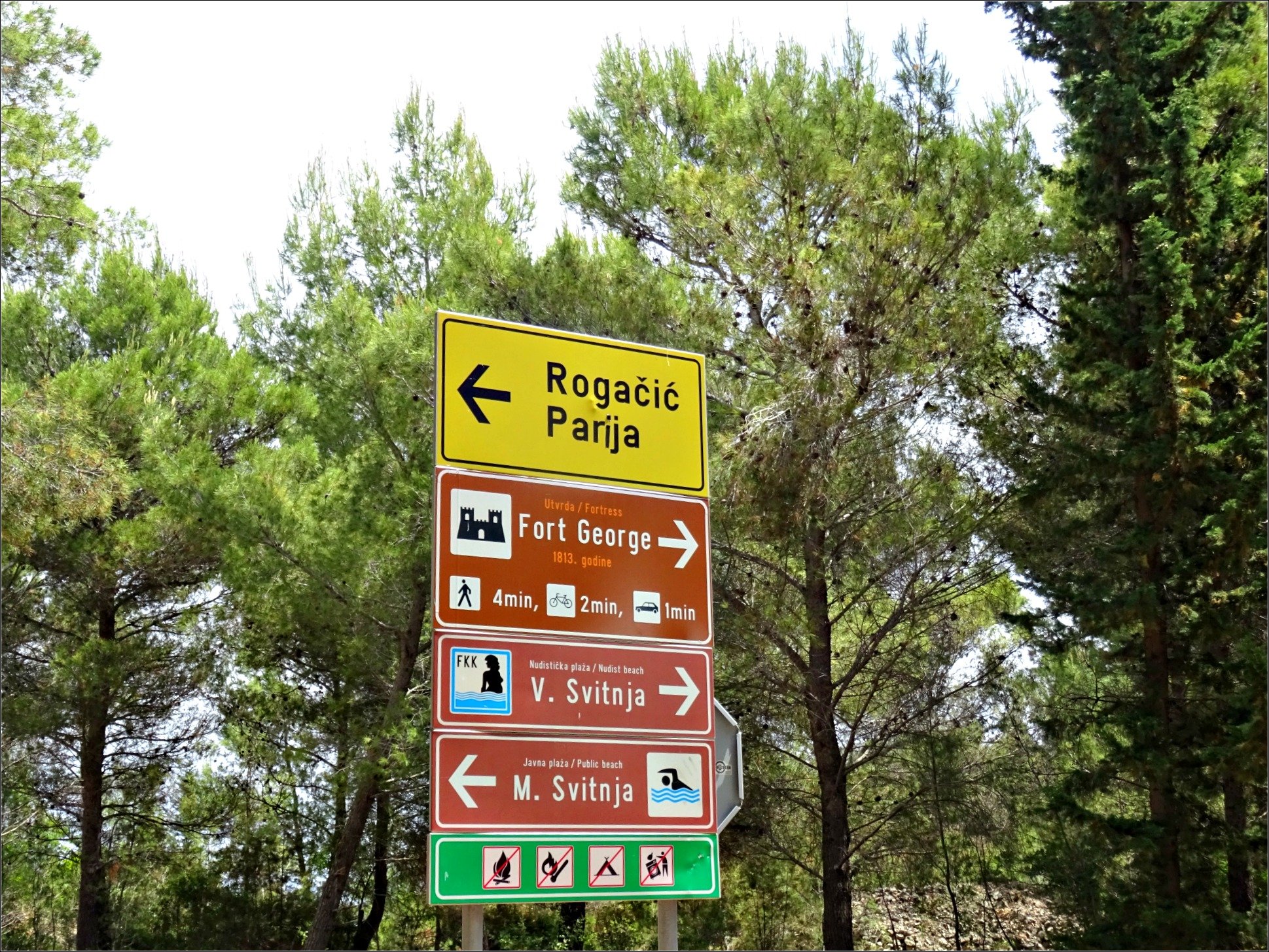 The submarine pen, code named “Lobster” can be glimpsed a few times along the winding road. Foot access to the pen is to the right in this photo.

Parija Bay, sometimes written as Parja, is an out of the way holiday destination and I’ve since uncovered a lovely Airbnb apartment there with it’s own private dock. Remember if you haven’t used Airbnb before you can save money using the link in our sidebar.

I just had to include a photo of the village at Parija together with our fun convertible. That car just keeps on giving.

The British preceded the fort, which housed light cannon and musketry, with a fortification on Octočić Host Island at the mouth of Vis Harbour, which contained two 18 pound guns. That fortification is in ruins today. Another three defensive towers were built behind the fort and a further one across the bay. If you are considering doing a Military Tour (see section below) it will probably take in the Fort also.

After WWII Yugoslavia used Vis Island as a Naval Base and built a submarine pen. Submarines are a thing of spy movies for me and I’ve never seen one operating in real life. How bizarre would it be to see one surface in front of you? To see the pen, so vivid and abandoned was thrilling and entering even more so. On Croatia’s independence in 1991, Yugoslavia walked (or sailed) away from the island. To find out more about this and other military installations on the island you might like to take a Military Tour. While researching this post I found two organisations that run tours Paiz Travel, and Vis Special, neither of which I am affiliated with. Prices range from 35 euro to 55 euro, the difference being a wine tasting at Lipanović in an old military tunnel.

Vis Island the most beautiful island in Croatia
Next Post: Is the Valley of the Temples at Agrigento Sicily really in a valley?