The old district of Trapani Sicily juts out into the Mediterranean on a small peninsula, a situation not unlike Ortigia and Syracuse.  By the time our introductory walking tour was over (the first thing to do in a new destination) I had fallen for this unpretentious town with it’s old buildings, lively bars, beautiful doors, big gelatos and intriguing pastries. That gelato really delivered in the taste and value for money departments.

Thunder rumbled through our last night in Palermo and sure enough, just before we began our Sunday Morning walk to the bus station, the rain started.  Luckily for us, traffic was light and we were left in peace to negotiate puddles and dodge drips. The glazing sealant at the bus station was non existent and it was raining inside the room.  With the floor puddles encroaching further and further people vacated their seats.

We decided to wait outside for the bus, but the attendant indicated (with thumb and forefinger) that we should stay inside just a leetle longer.  We were concerned that without seat allocations nabbing a seat could become lethal. When she finally gave us the nod we bolted outside to the bus, where incredibly there were plenty of seats available – but of course she knew that!

The roads were wet and I decided to use the seatbelt provided, then felt vindicated as before the Palermo outskirts were reached we saw the results of a fatal road accident.

Awaking on the approach to Trapani Sicily we were relieved to find sun peeking through the clouds and soon after arrival we piled bags into our Airbnb host’s car. 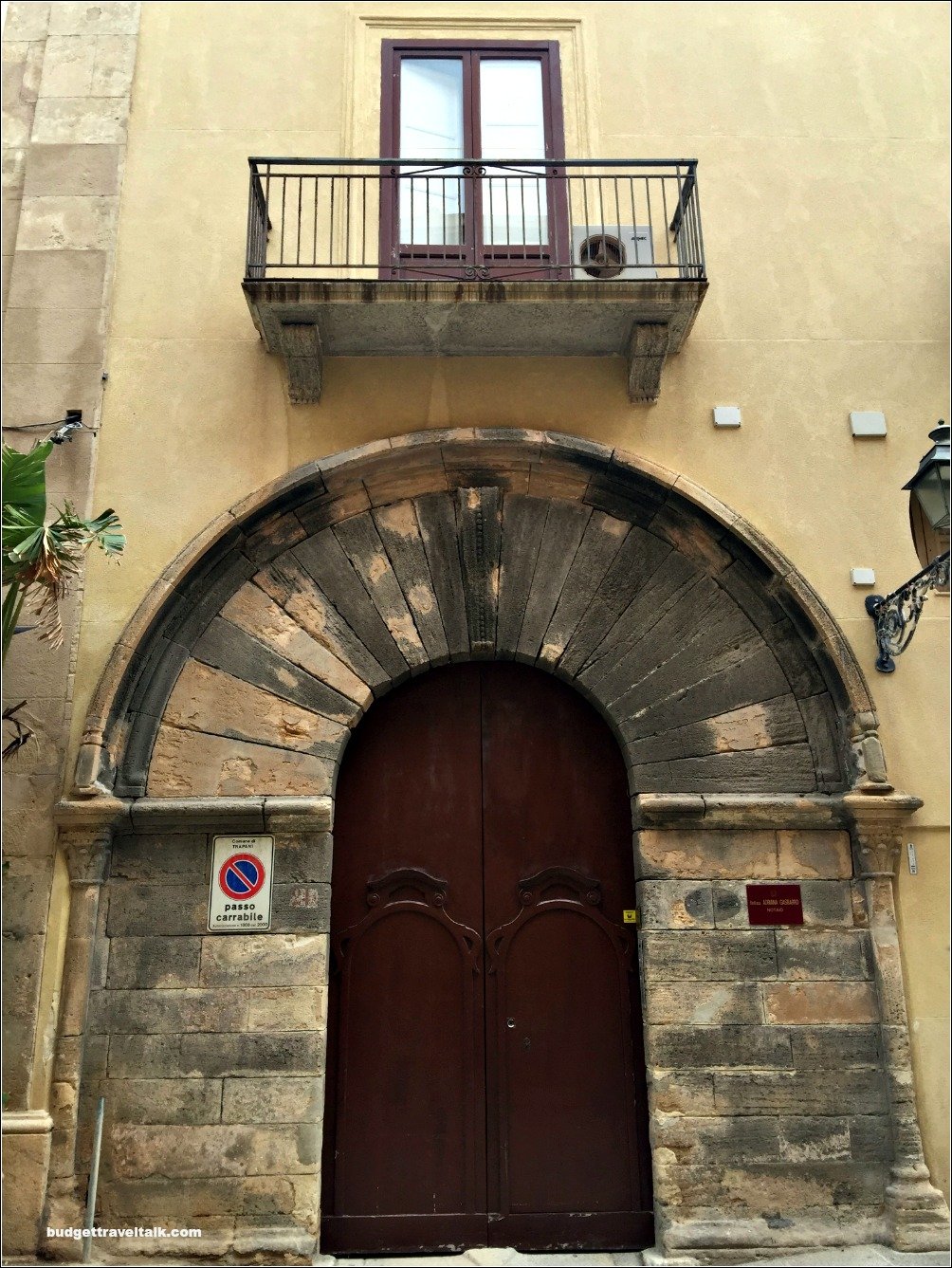 The modern outdoor furniture married well with the old buildings. 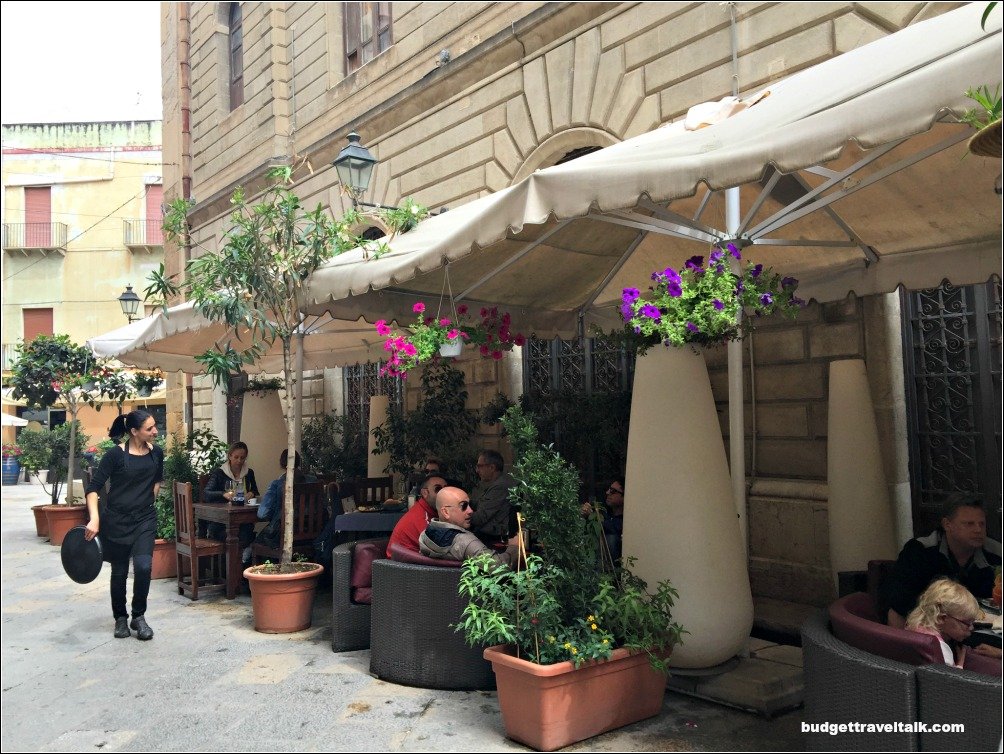 So many impressive doors… 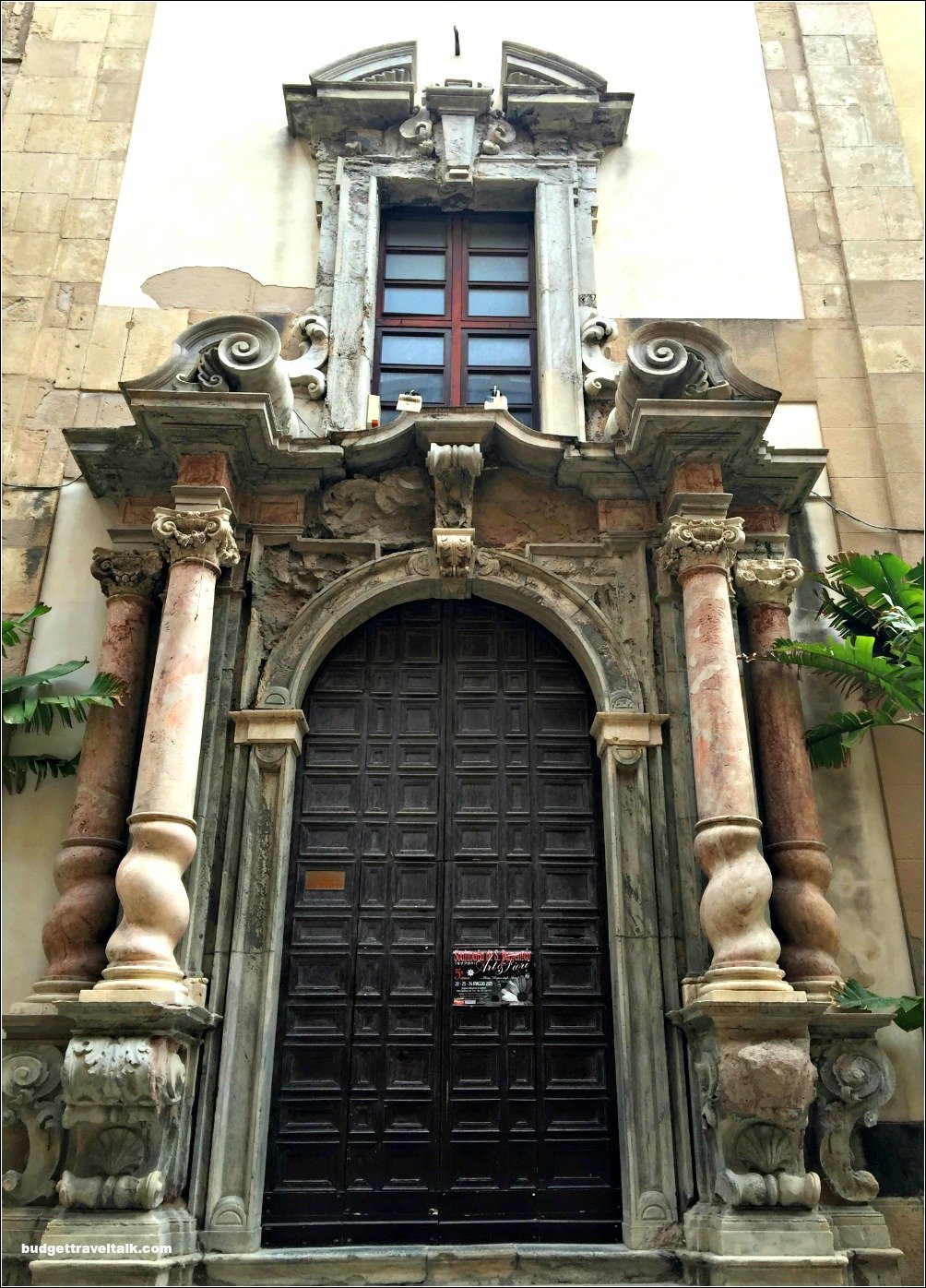 Every street had me pulling out my IPhone. 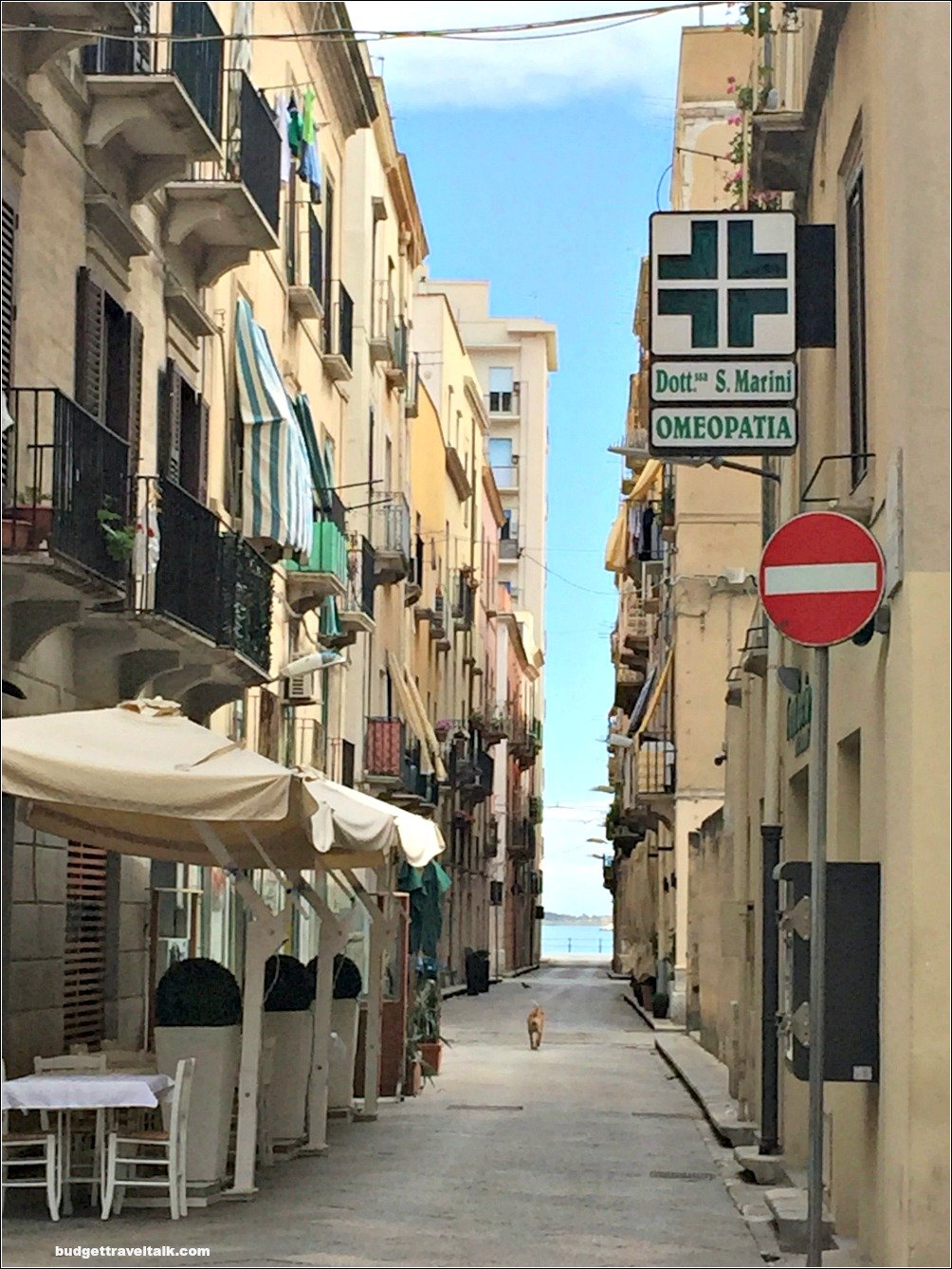 She smiled and gave me a little wave – a nice touch. 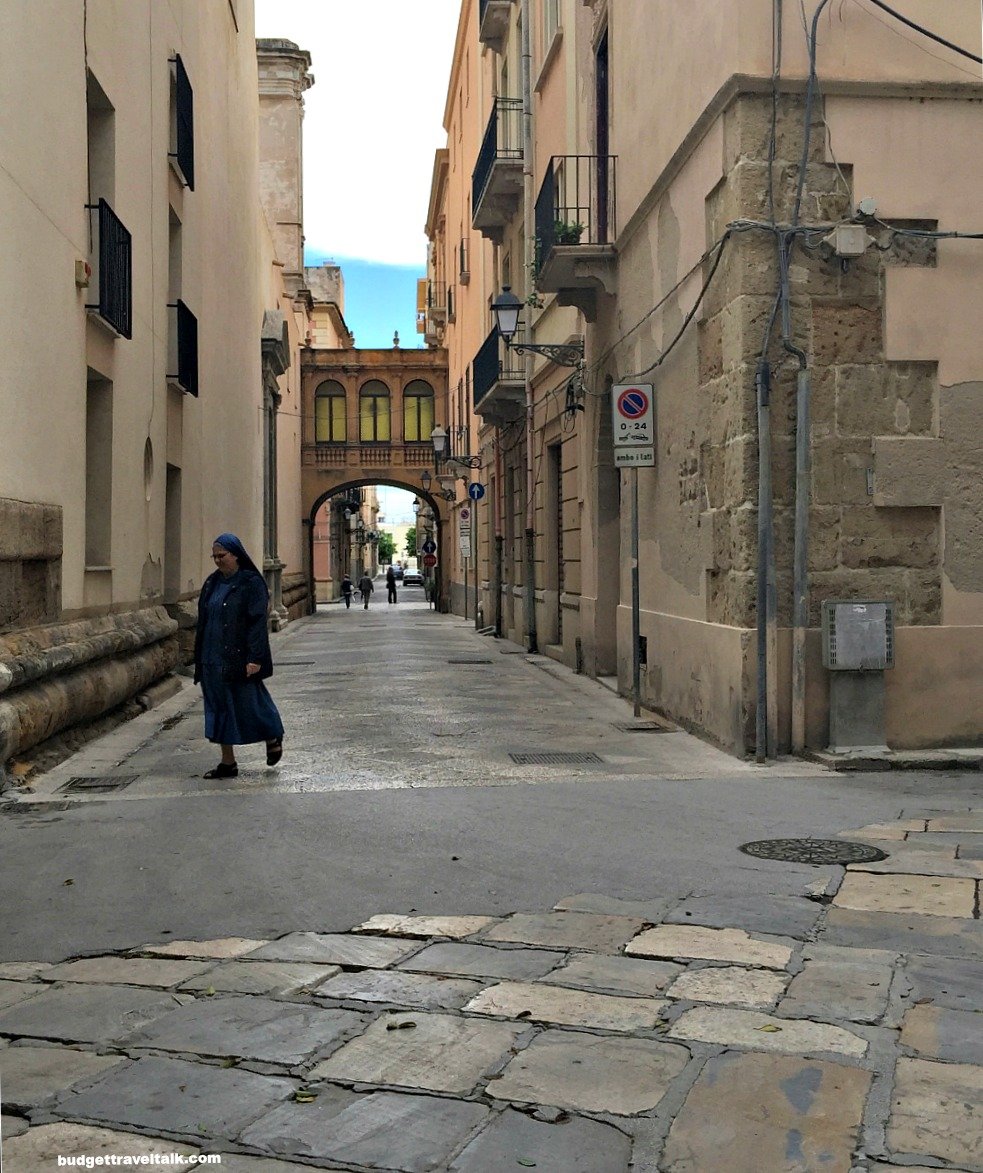 Most side streets had a watery end. 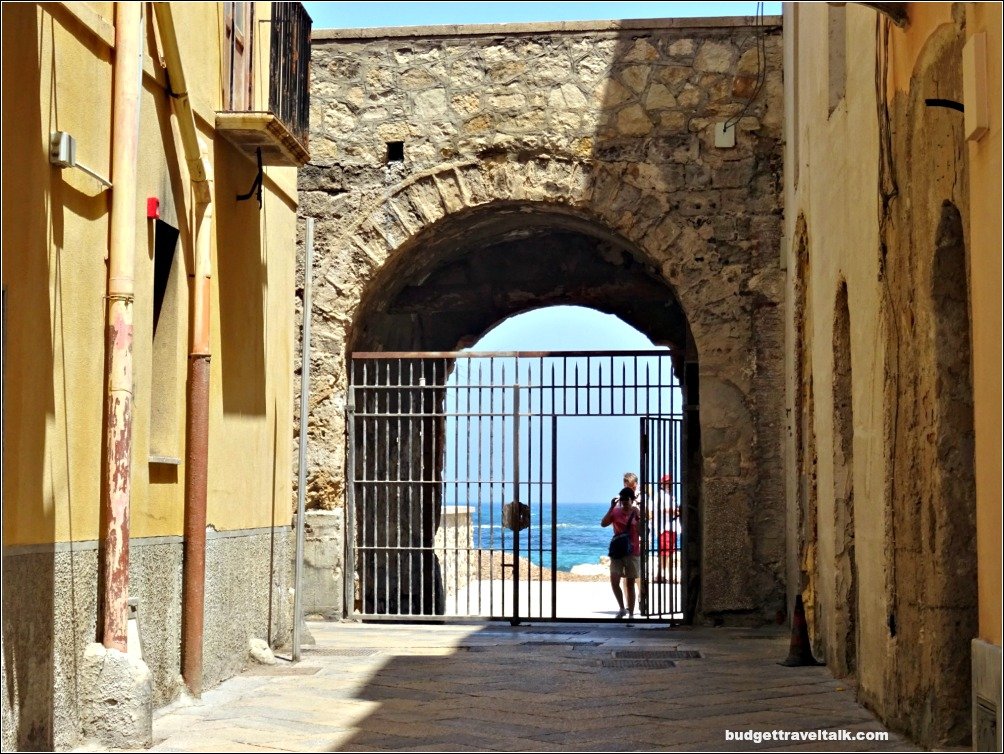 Piazza Mercato del Pesce.  These beautiful arches of the original fish market date back to 1874 and as you would expect are right beside the ocean. 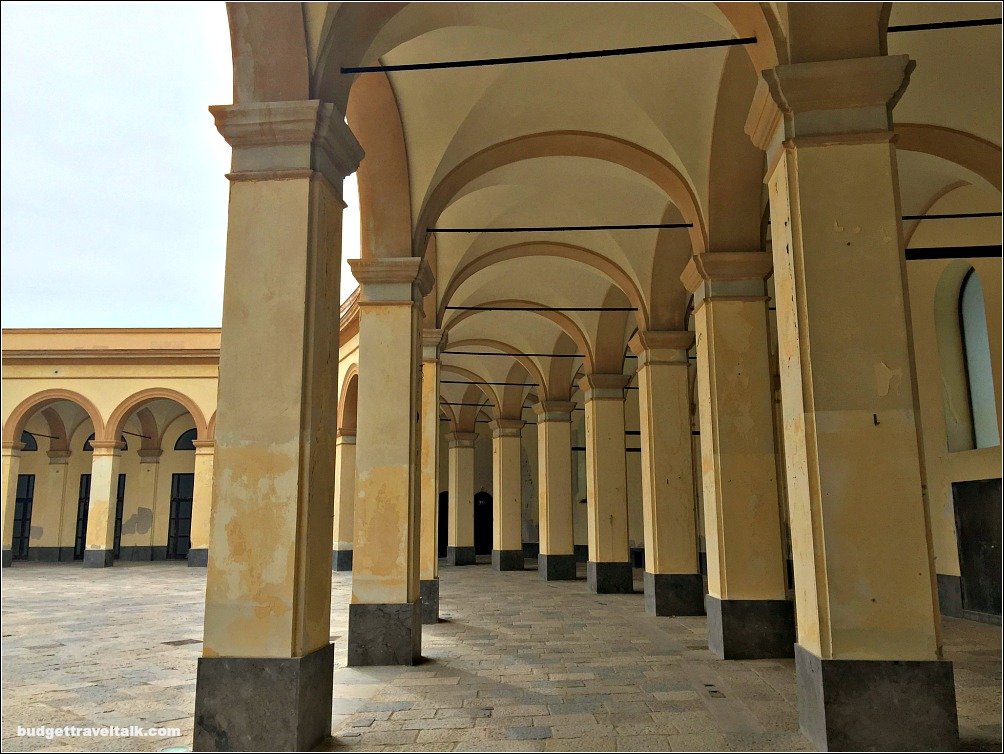 The box like structure in the background below is the Tower of Ligny – built in 1671 under Spanish Rule to guard against Saracen invasions. 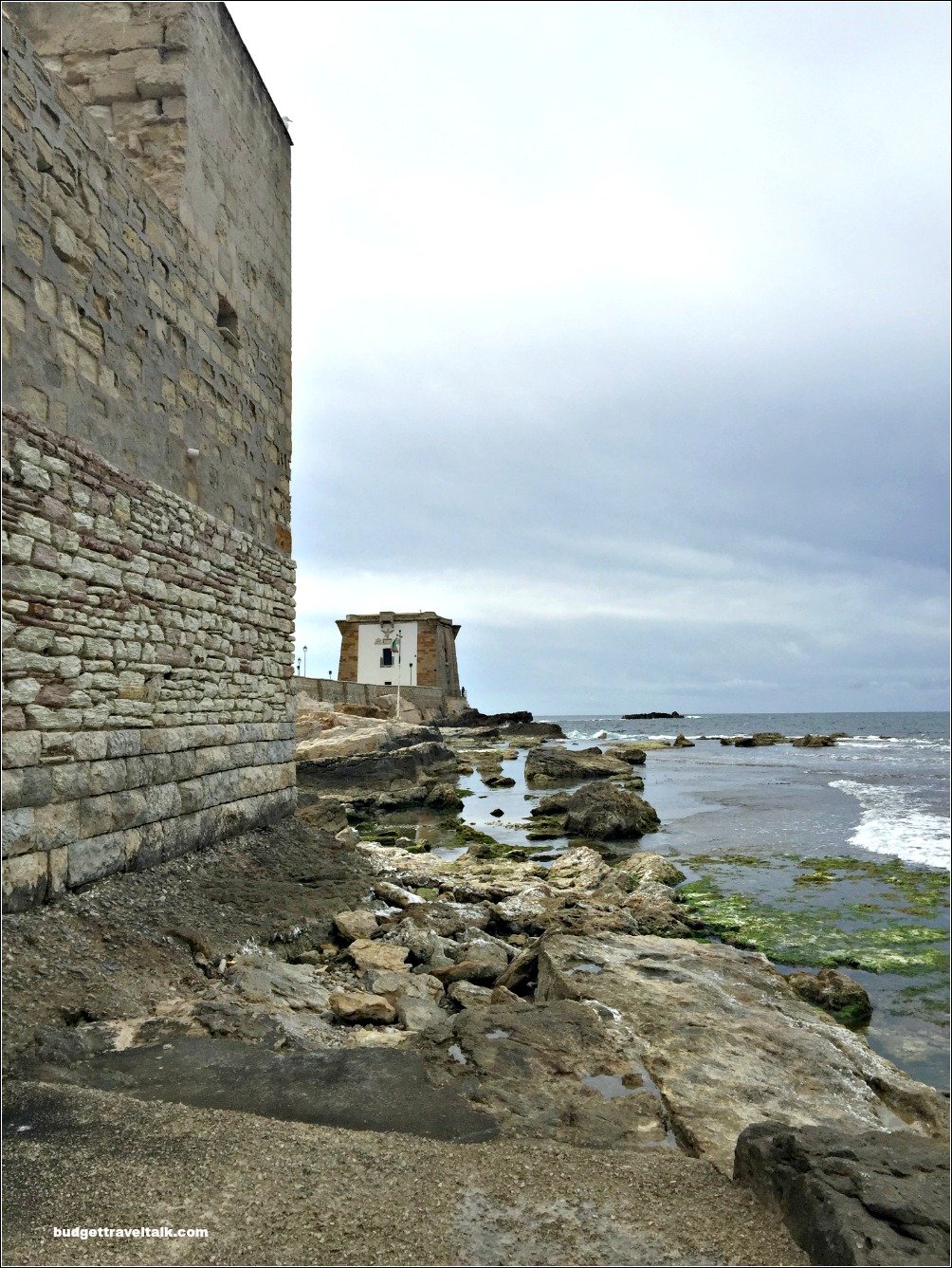 Looking toward town the buildings reminded me of those (photographs) of the port town of Cadiz in the south of Spain.  Like Trapani, Cadiz also faces Africa. 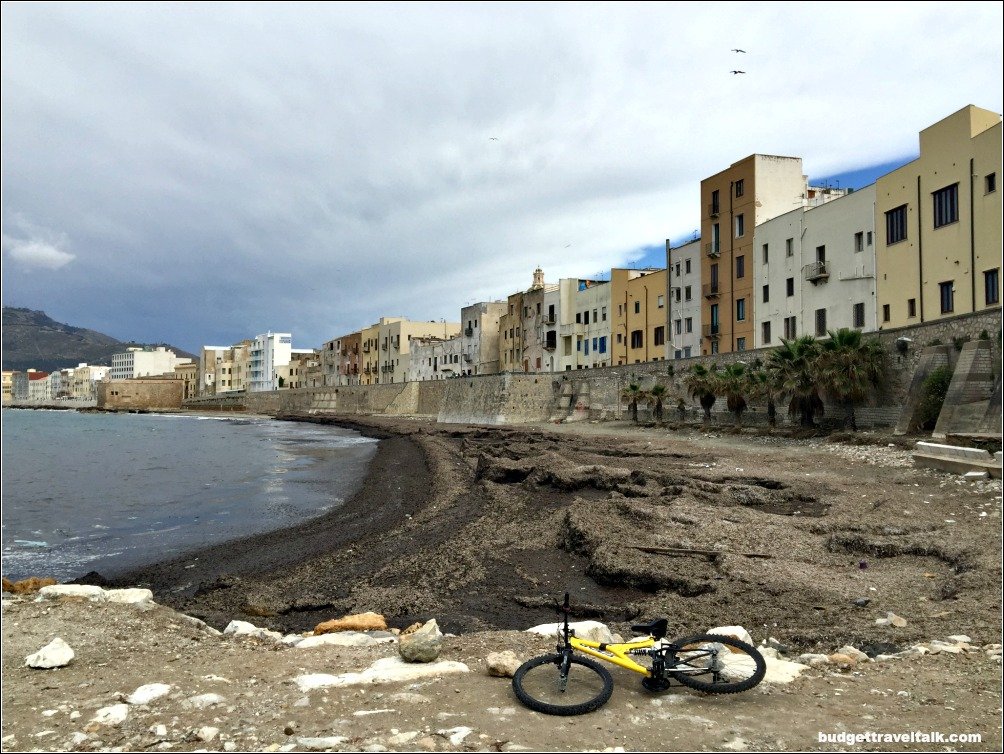 Across the peninsula we could just make out the fishing boat port and beyond that the derelict Castello del Colombaia or Dovecote on it’s own island. 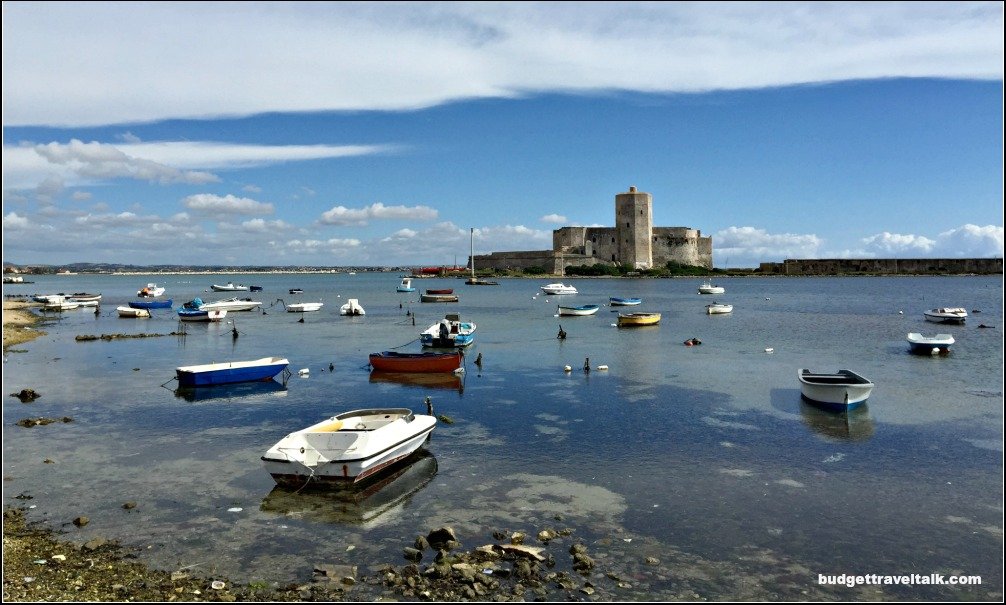 The fishing port was a tangle of lines and boats, some barely afloat and others obviously in daily use.  We returned the next day to the daily (new) fish market. 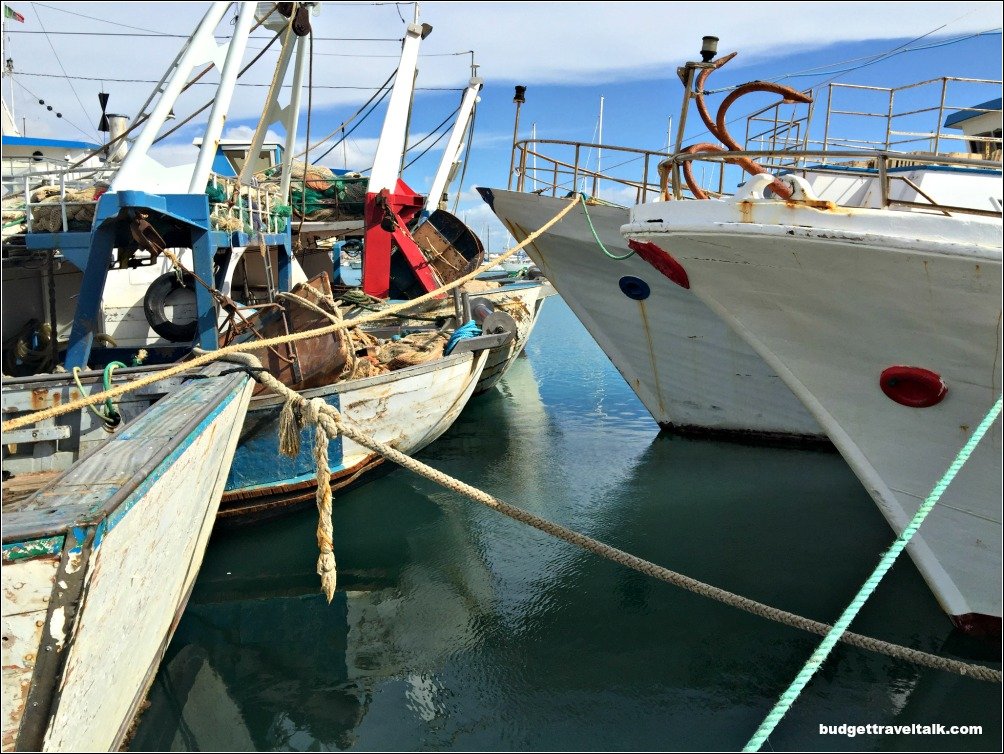 This vintage car came tootling past us with an equally vintage couple in it. By the time I got my phone out of my pocket they were far away and I had to go to full zoom to capture them in the distance.  I’m sure the paintwork was faded but original.

Looking back to Trapani from the Fishing Port.

Adult Bus Fare Palermo to Trapani was 8.60 Euro one way.

The popular Bernardo bakery on Via Ammiraglio opens on Sunday. Pizetta 1.80 Euro and Spicy Salami, Cheese and Lettuce Roll on their own baked bread 1.20 Euro. Take Away and enjoy a relaxed port walk.

Bar TorrePali next door to Ciuri Ciuri has a DJ and a lively crowd on Sunday night and is a popular breakfast bar.

Bus Connection to the Airport is 4.50 Euro from Egatour travel agency on Via Ammiraglio.

Pompei and an unexpected Celebration
Next Post: Zadar Sunset with Light Show and Music for Mermaids