Galata is the southernmost Neighborhood of Istanbul’s Beyoglu District.

Some first time visitors choose to stay amongst the big name sights of Sultanahmet, but for our first week in Istanbul we chose the Galata Neighbourhood. Downtrodden and derelict in the 60’s it’s cobblestoned streets now hold an interesting collection of design shops, cafes, kebab places and hipster boutiques and the bonus is, it is a great area to rent an apartment in. The different neighbourhoods of Beyoglu blur into each other and are hard to define on a map, but Galata’s indisputable boundaries are the Bosphorus to the east and the Golden Horn to the south.

The Bosphorus boundary of Galata. 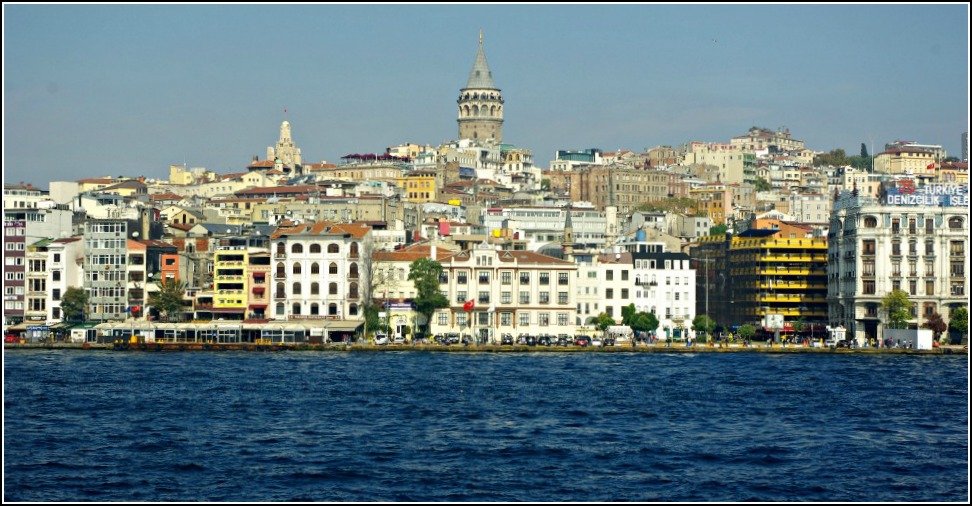 What is Special About Galata?

In September the bridge was mostly framed by bright blue, but toward evening it showed a mellower side.  This photo was taken from the Eminonu side of the Bridge. 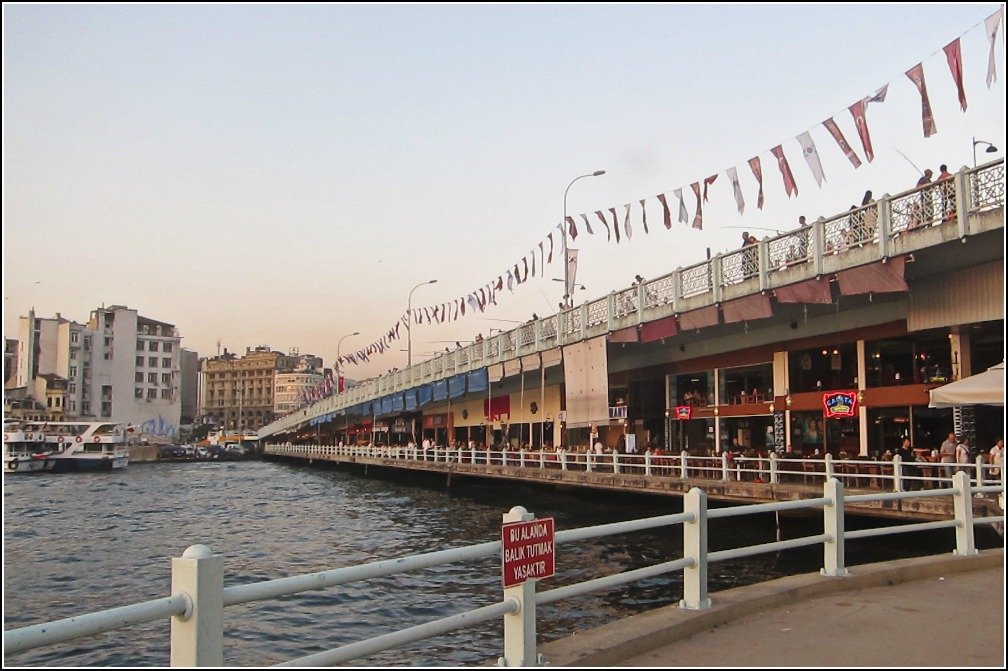 The current Galata Bridge was completed in December 1994.  It straddles the Golden Horn inlet, joining the transport hub of Eminonu with Galata, via three vehicle lanes and one walkway in each direction, a tram track, an under-level of fish restaurants and a central busy ferry channel beneath.  It’s most defining feature is the ever hopeful line of fishermen on it’s upper level. 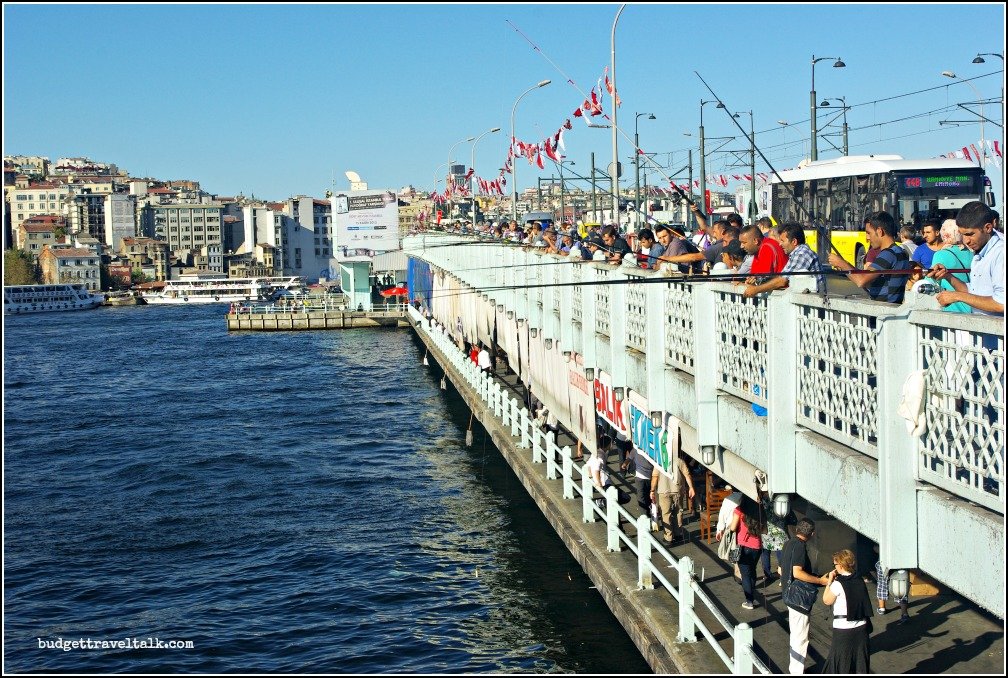 For a good view of the Galata Bridge and the Golden Horn inlet head to Topkapi Palace in Sultanahmet. 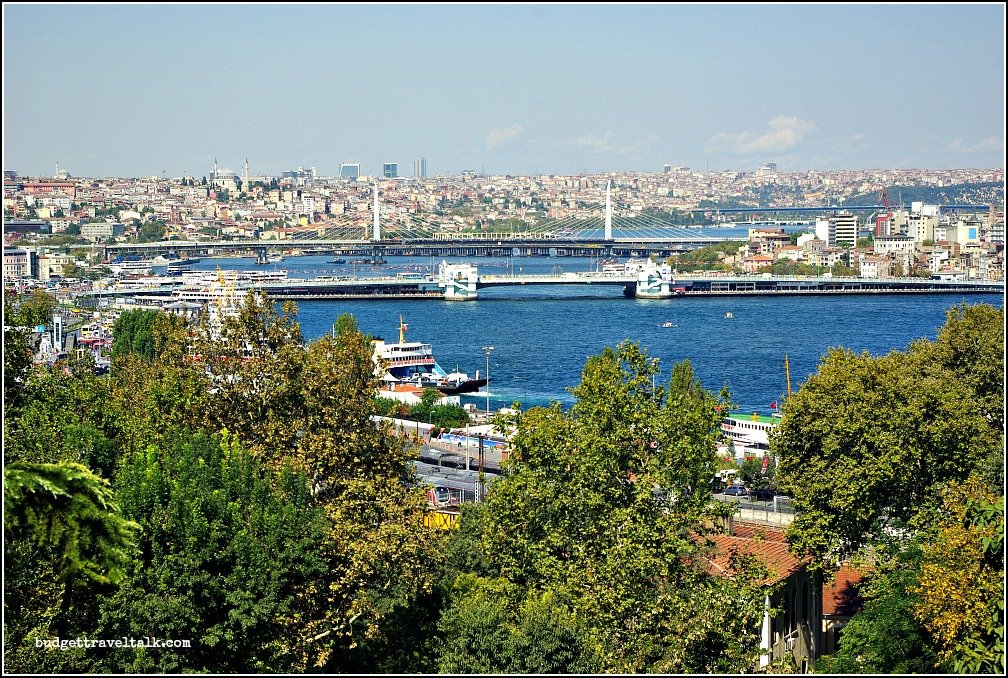 Built in 1348, the tower lost it’s conical roof during a storm in 1875 and didn’t regain it until it’s restoration and public debut in 1967. It is particularly attractive in a golden light, but as my camera card will attest I am a fan at any time of day.  From 1717 during the Ottoman era it was used as a fire spotting tower as the Ottoman houses were made of timber.  The tower walls are an incredible 3.75 metres thick and a lift leads to the 7th floor with a restaurant on the 8th and cafe and viewing deck on the 9th. 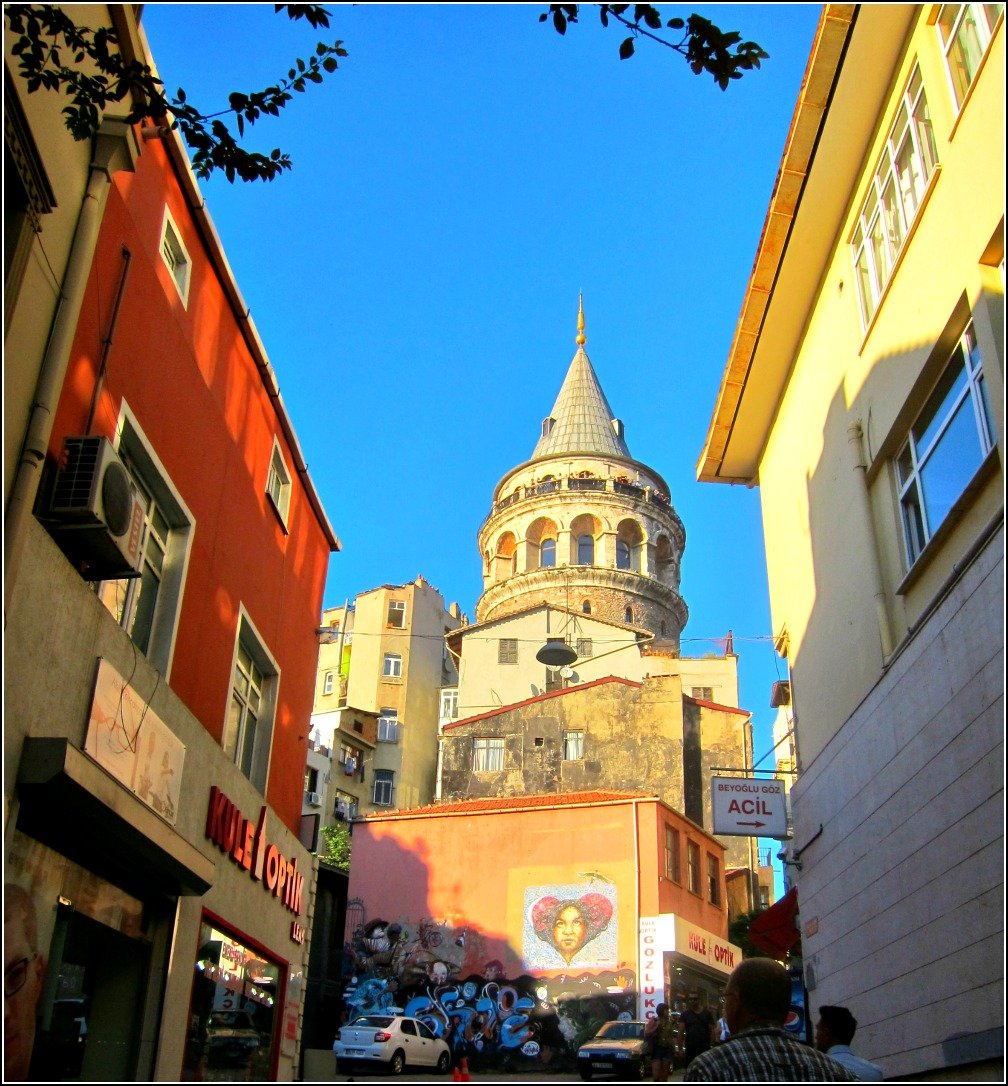 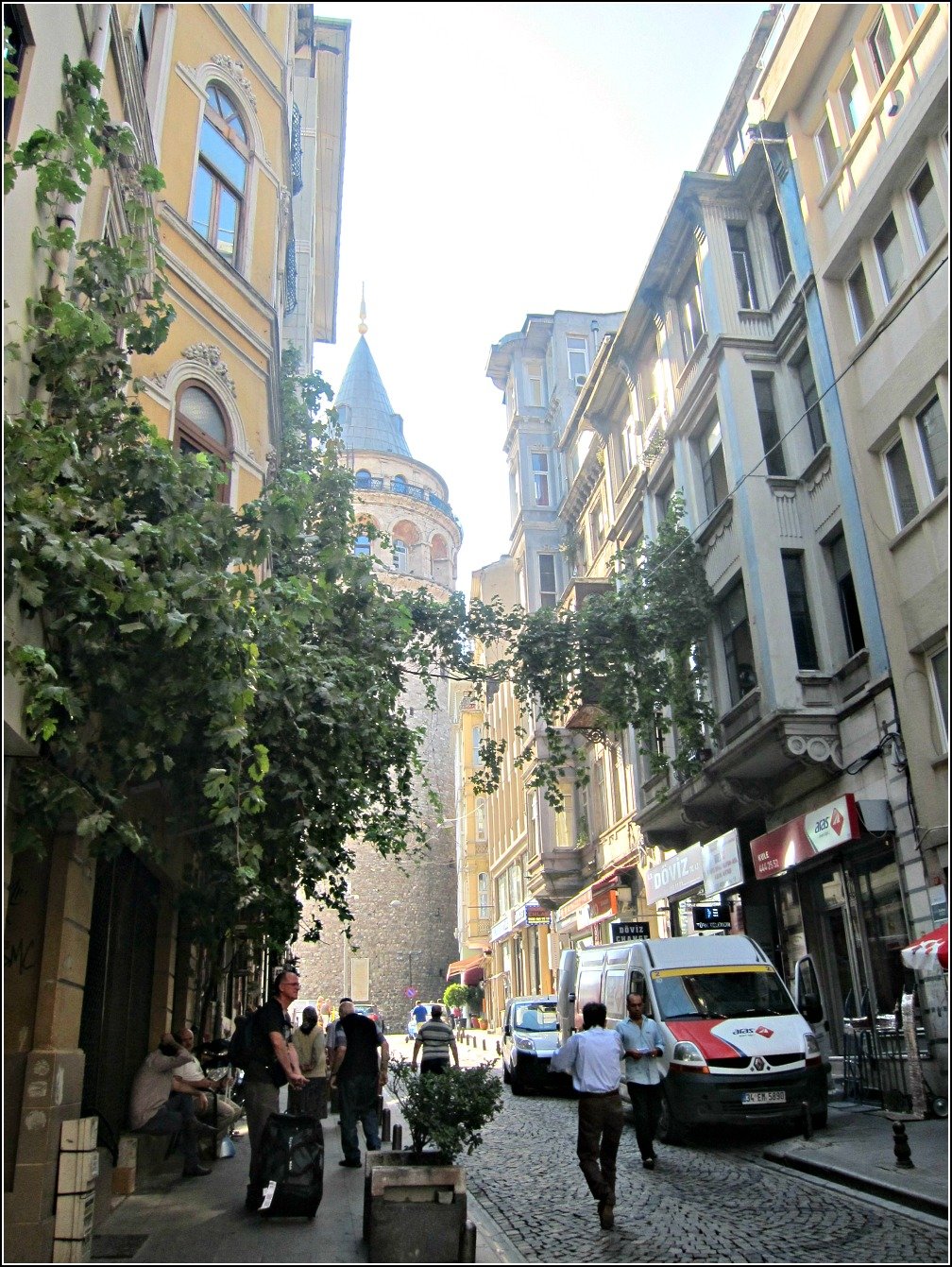 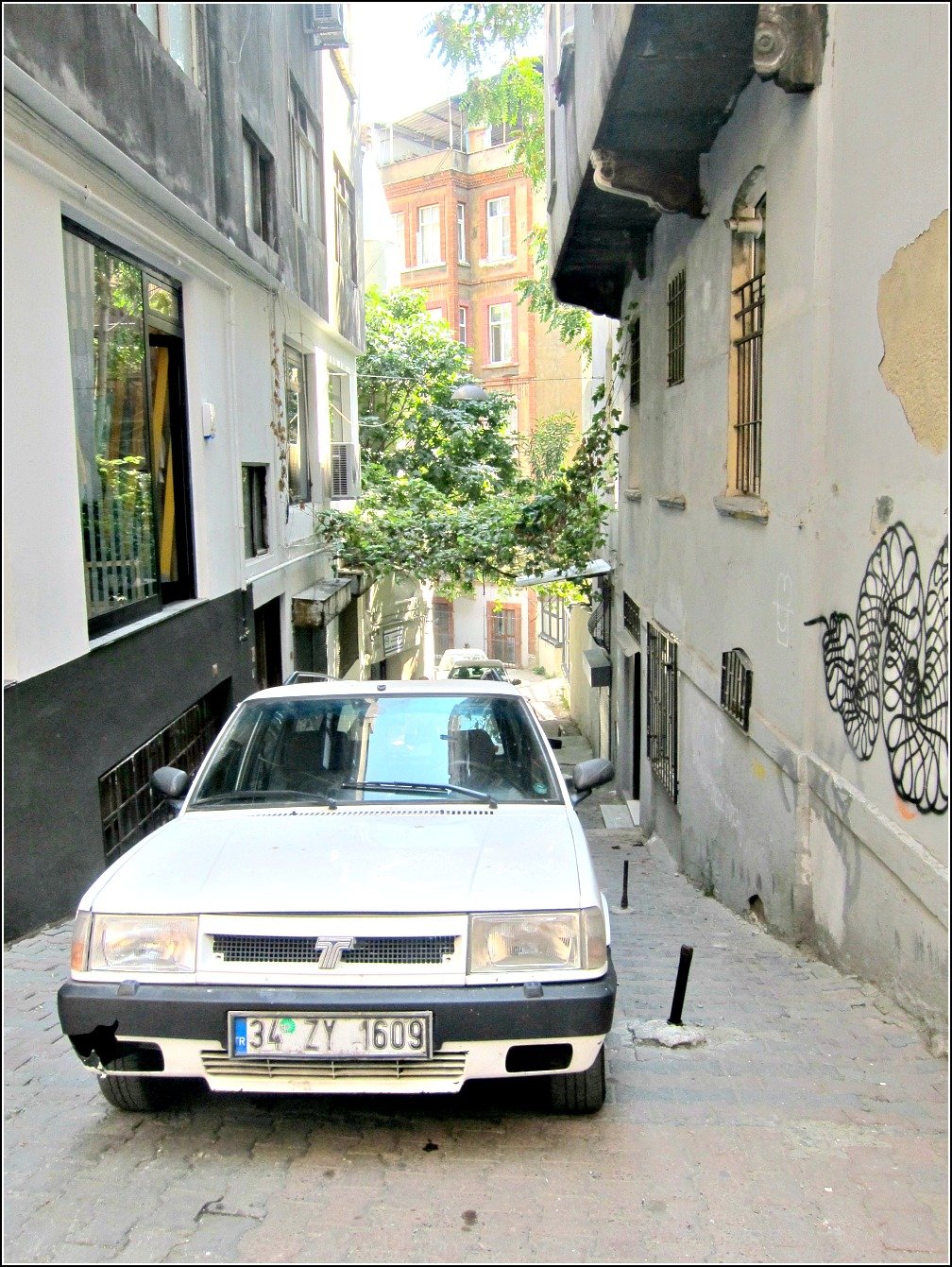 An emerging art/design area. The street our apartment was in. 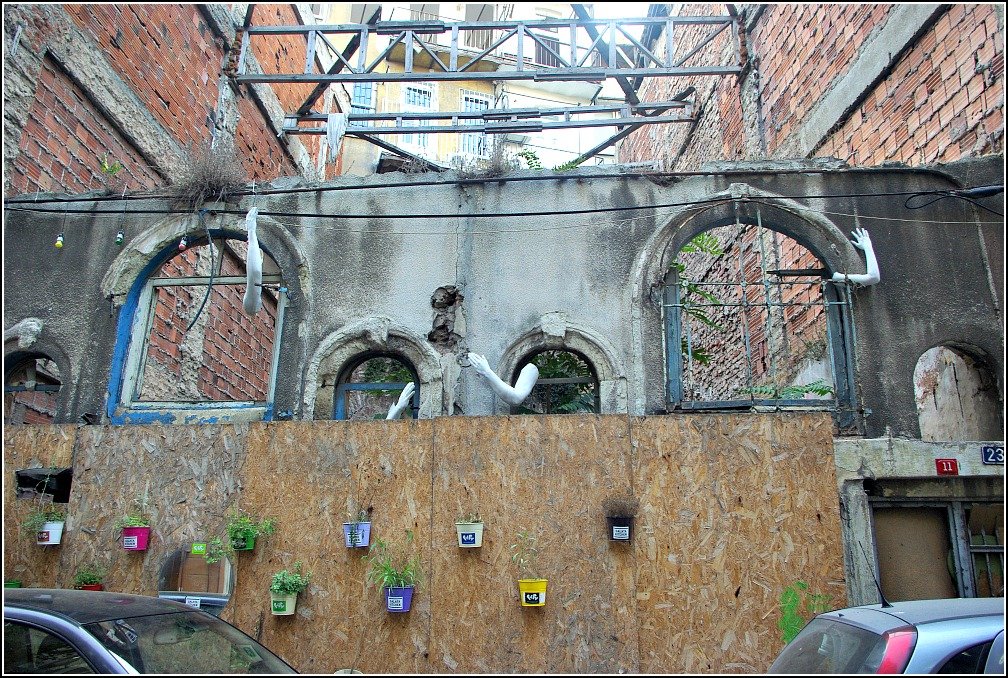 Although not expensive it’s tower views means it is not dirt cheap either. 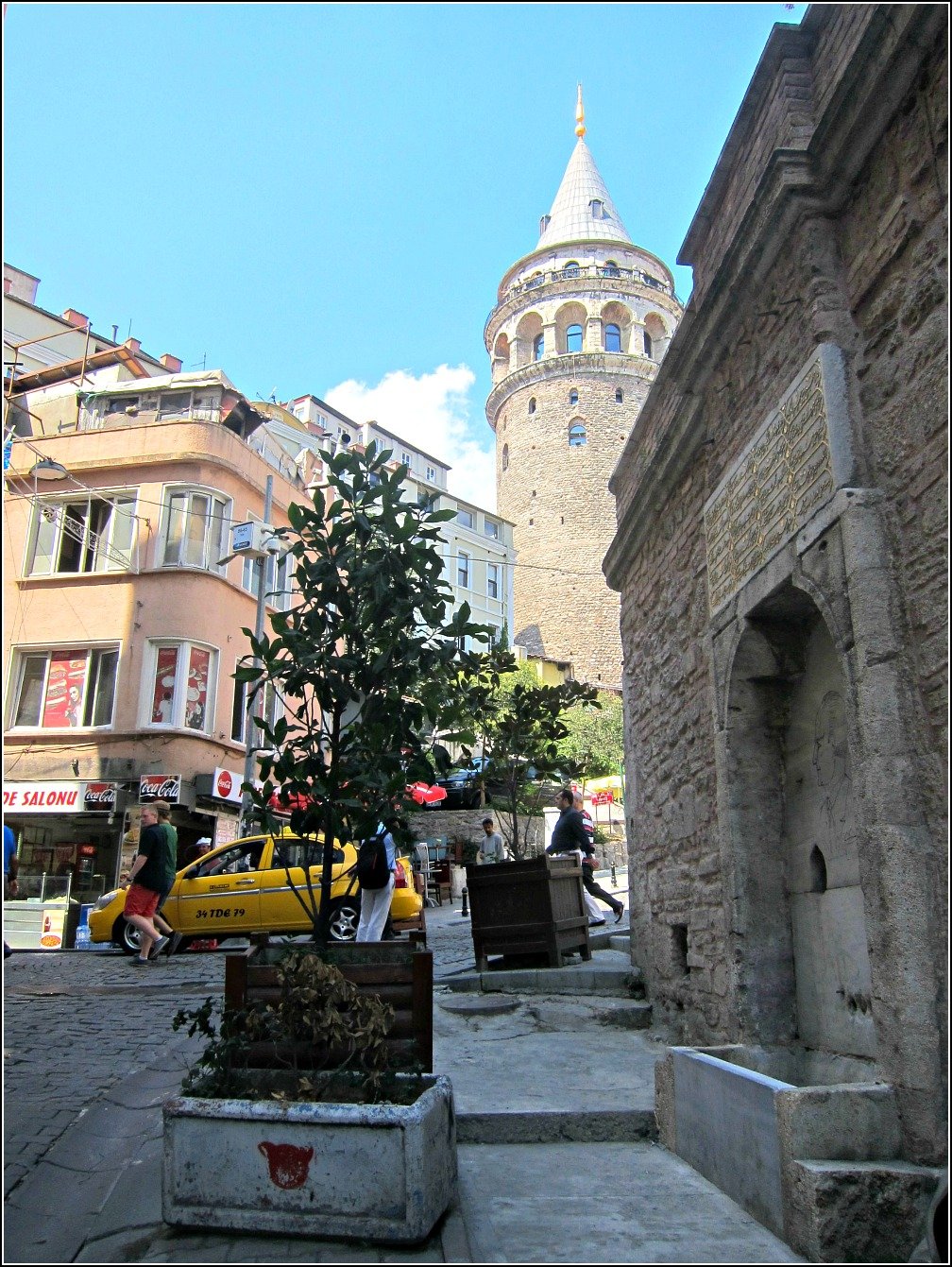 In a tasty twist the rotisseried chicken dropped it’s juices onto the waiting layer of cooked potato chips below.  When asked, I hesitated to add them to my kebab sandwich… but not for long.

The copper/nickel mugs held the cold salty yoghurt drink called Aryan – the national drink of Turkey.  We didn’t know what we were getting but it was a refreshing if startling discovery.

Another given on any Turkish table are green chillies.  Shortly after we sat down the owner came and whisked our jar away, only to return it filled to the brim. 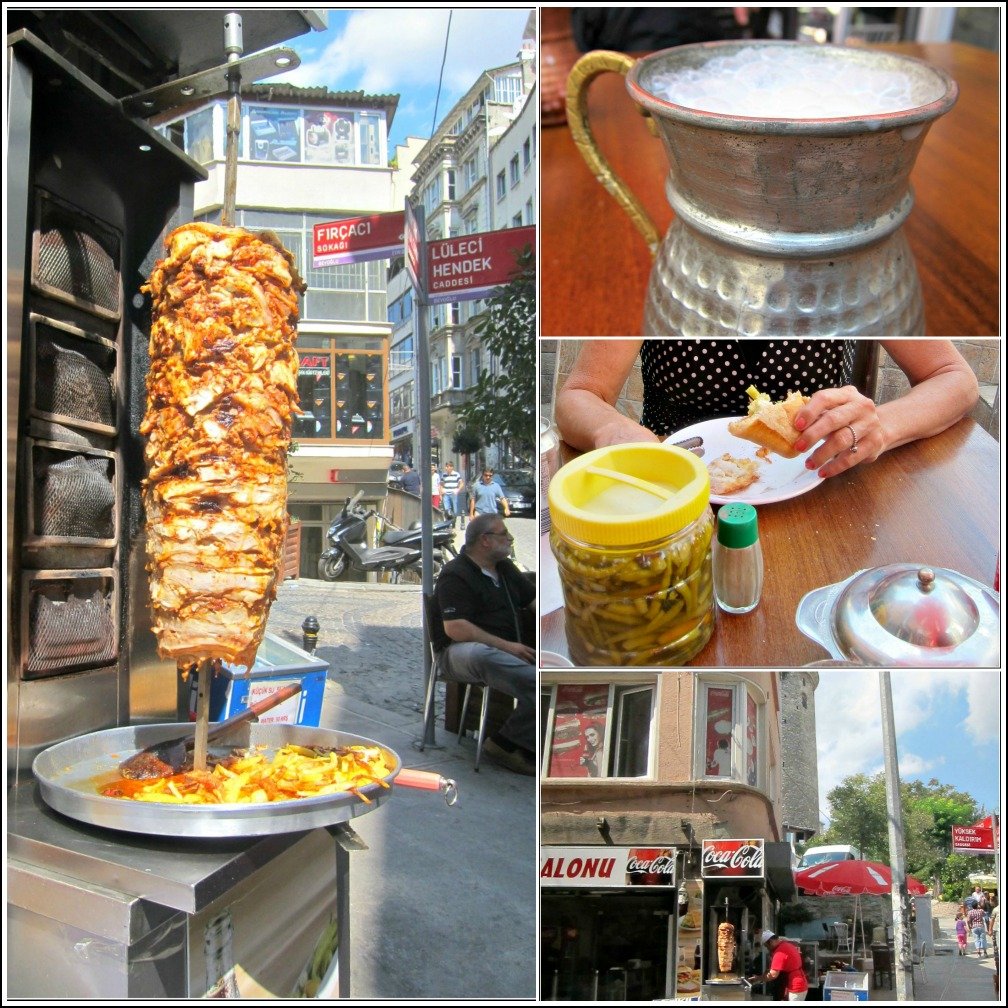 It’s a great place to take a rest and indulge in a little people watching. 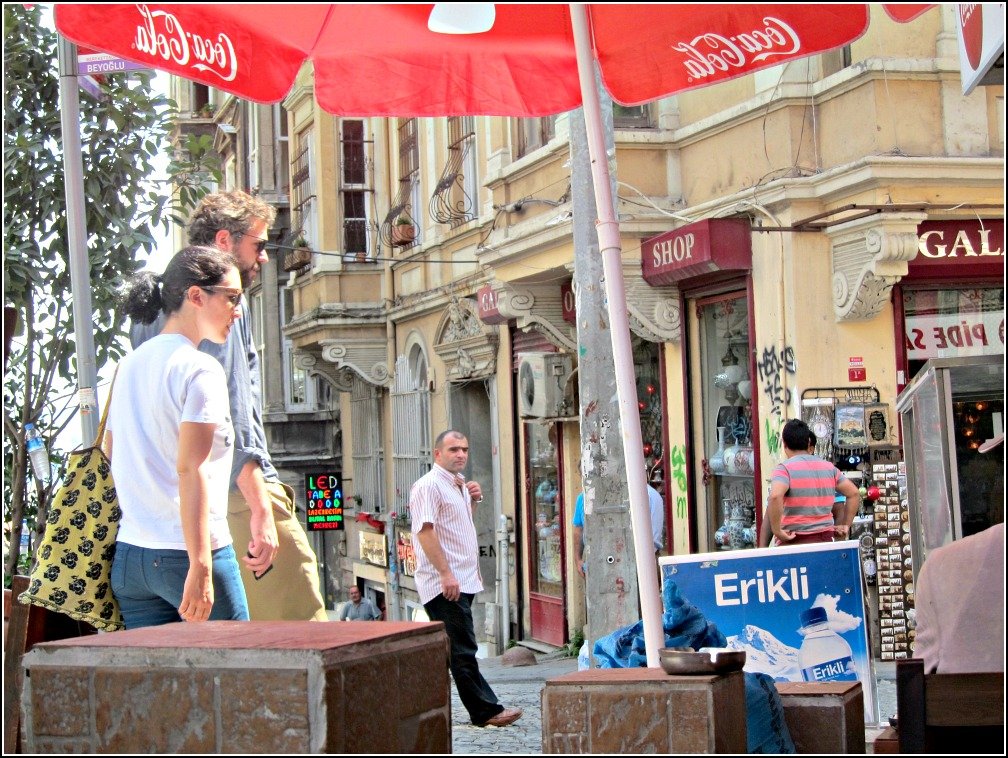 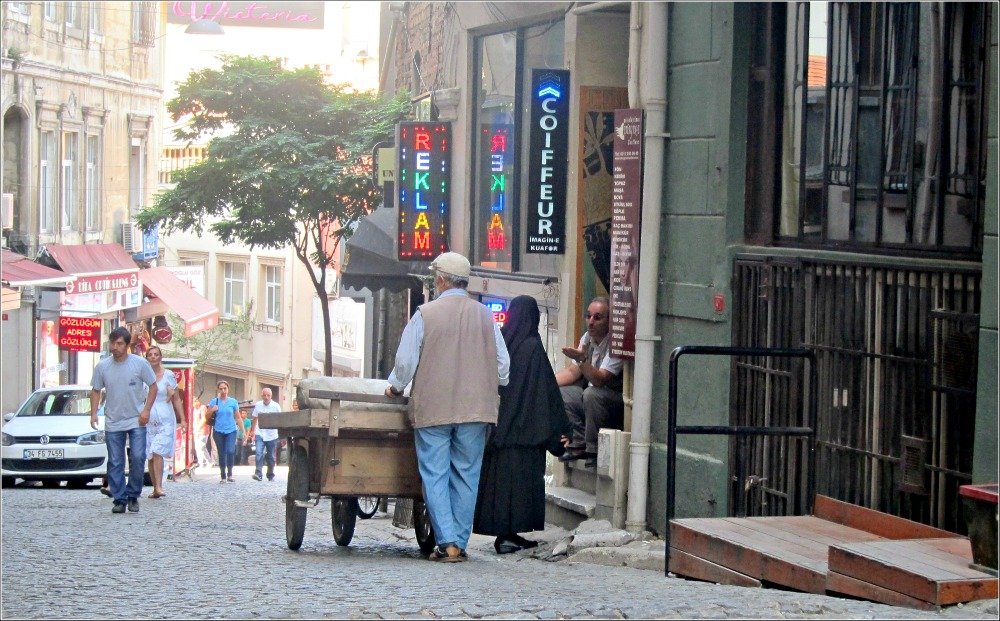 Galata Tower is on the right. We found it safe to walk around in this district at night. In fact we felt safe at all times in Istanbul. 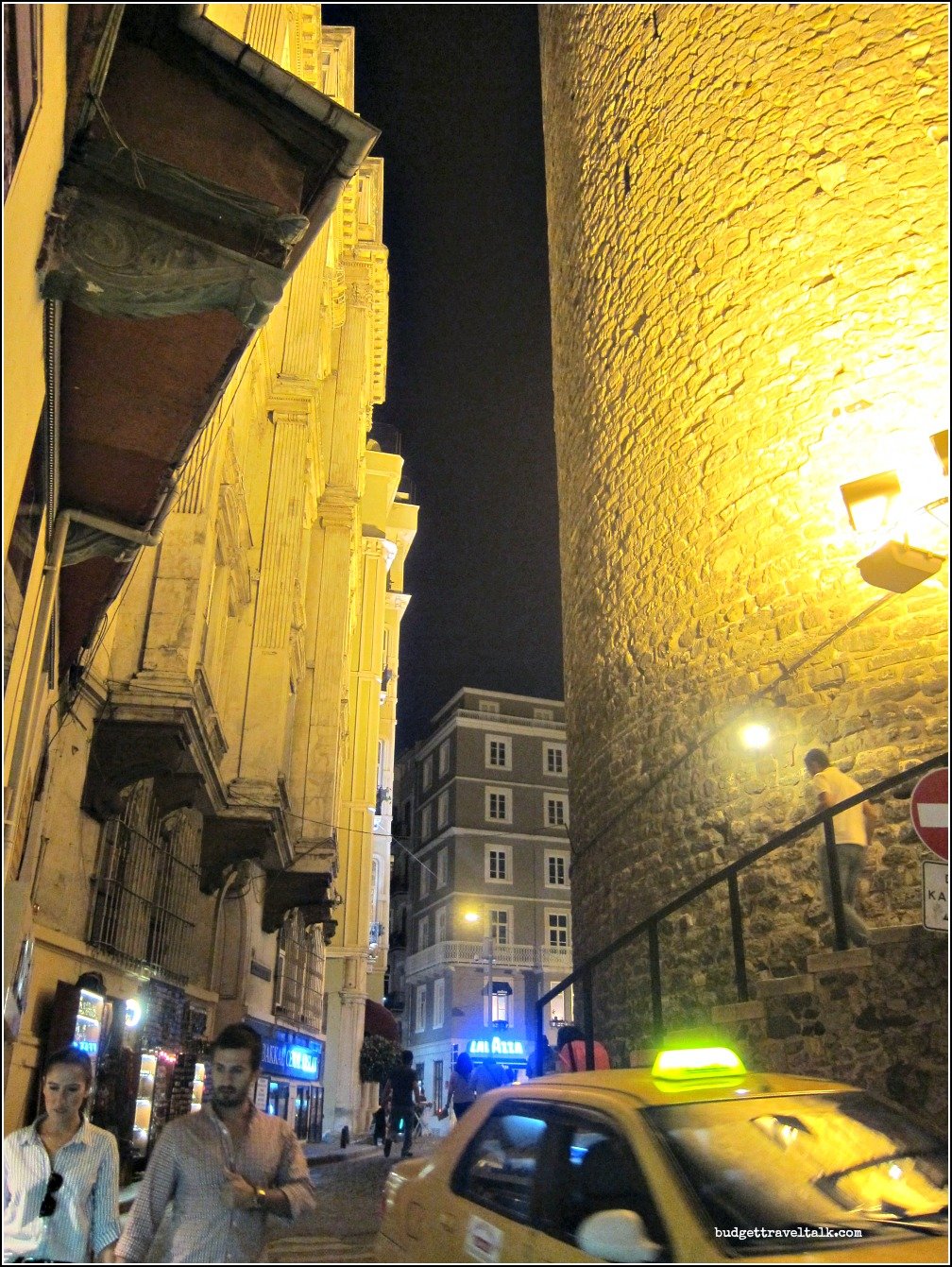 Walking is the best way to discover Galata.

Starting from Galata Bridge make your way to Yuksek Kaldirim Caddesi and turn left.  It is a challenging climb but Istanbul is built on seven hills so it is inevitable. 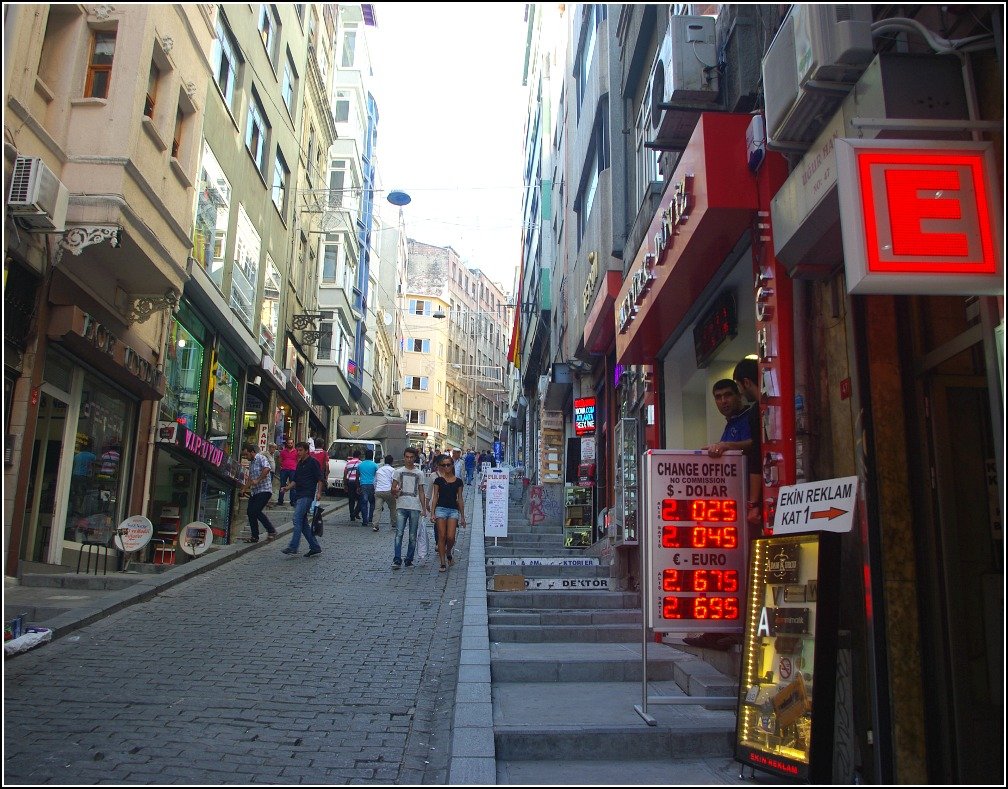 Continue climbing as the name changes to Galip Dede Caddesi and the shops take on a musical theme. 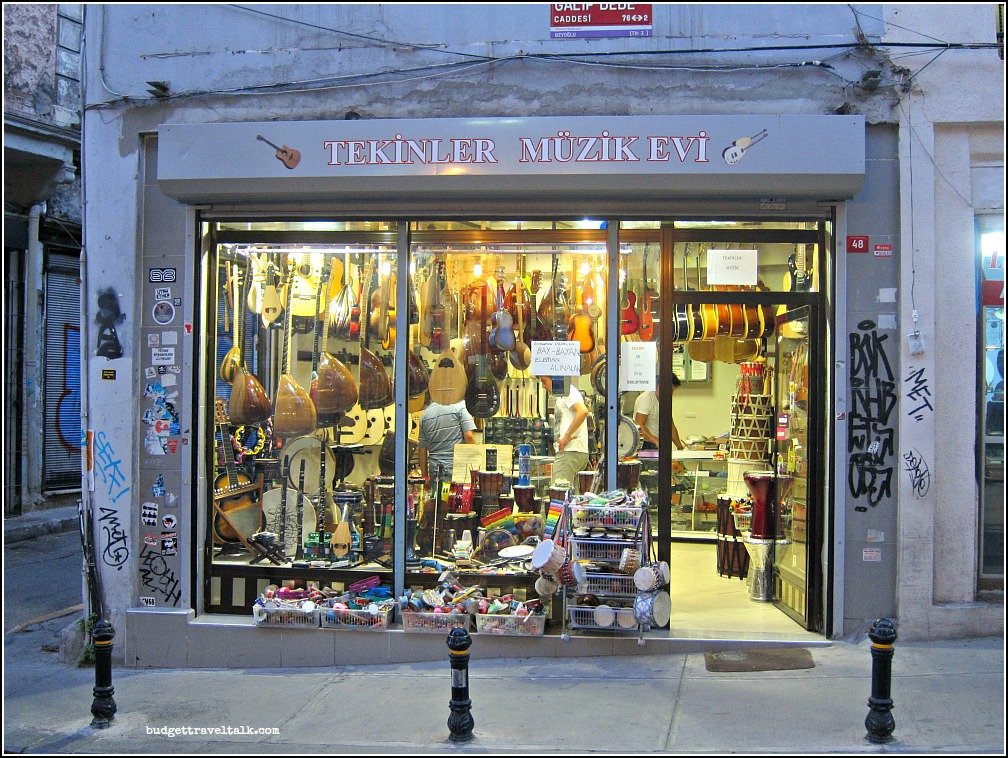 Always veering to the right arrive at the 1.4 km long pedestrian Istiklal Caddesi. This street is the beating heart of Istanbul with it’s ever changing mix of buskers, Dondurma Icecream Magicians, historic tram, restaurants or atmospheric lanes that beg exploration and a perfectly thick Mandabatmaz Turk Kahvesi.

At the far end of Istiklal Caddesi is the Taksim District.  The expansive Taksim Square is an important transport hub and traditional meeting place for locals and visitors.  It was here in May and September 2013 that protestors and police clashed making world news.  Protests have continued in Istanbul and other towns throughout Turkey.  I like that the locals are prepared to protest for their rights.  Between Taksim and the Bosphorus is the Cihangir Neighborhood of Beyoglu – another interesting place to stay.

Taksim Square in the early evening. 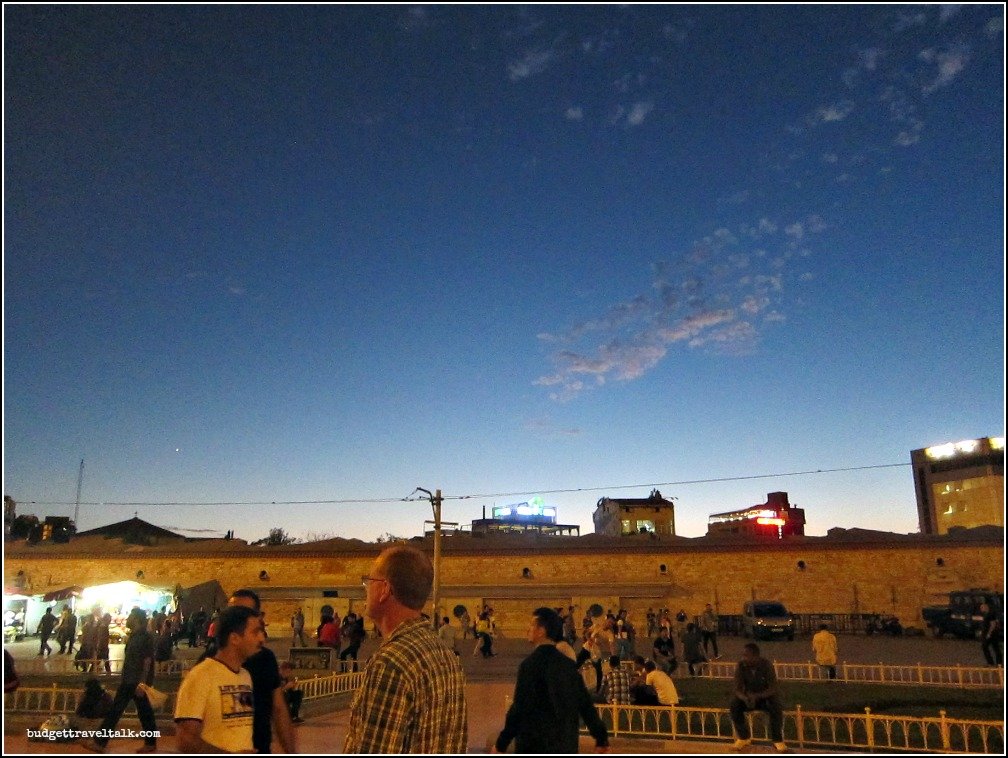 Seeing the Sights from Galata

Transport is easy when staying in Galata.

A mix of walking, the T1 Tram, Ferries and a very occasional taxi will see you through.

Buy an Istanbulkart (transport card) at the airport or from kiosks at Sultanahmet or Eminonu Plaza.  (6tl for the card plus choose an amount to spend).  It is the best thing for first time visitors and everyday commuters.  Valid for all transport including the Eyup chairlift, it can be left in your wallet or bag and passed in front of the auto reader. It deducts the discounted fare, giving further discounts on up to 5 transfers within 2 hours.   The 6tl card deposit is refundable on departure, or can be kept for next time, or passed forward to another traveller.  Only one card is necessary for up to five users. 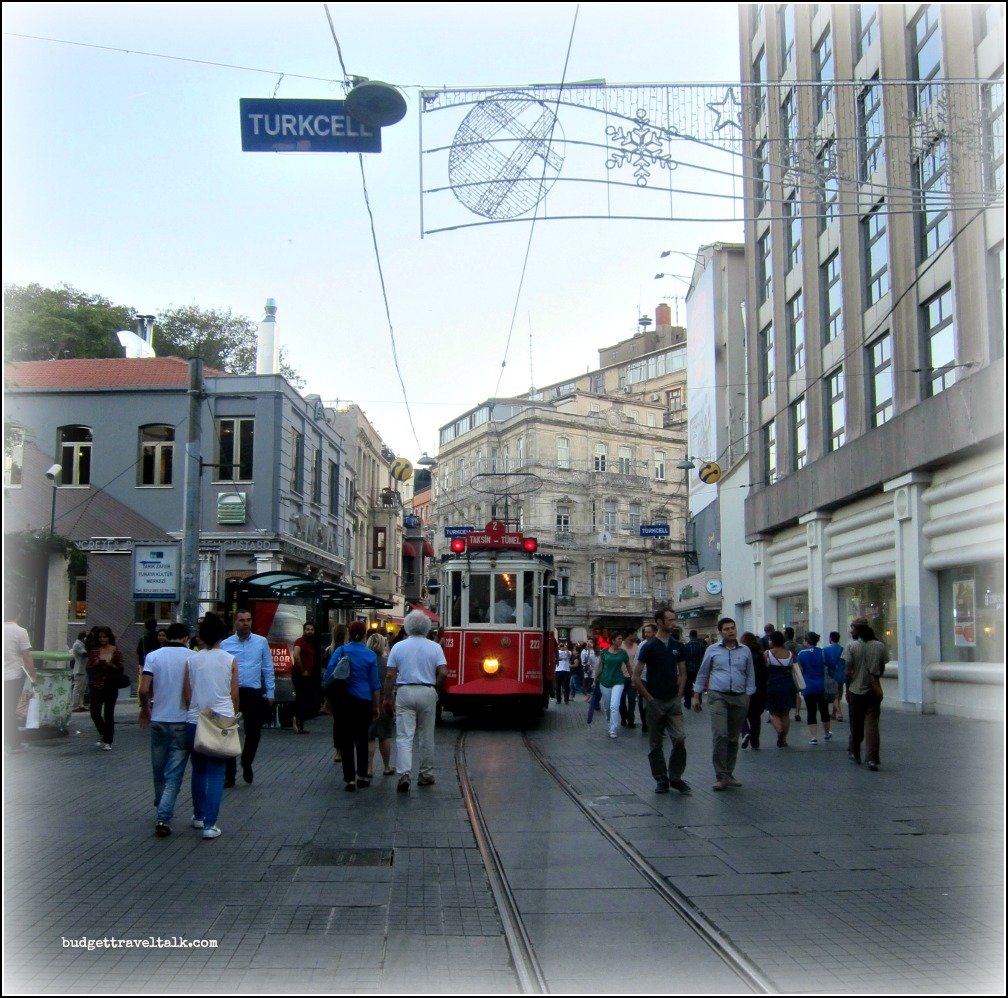 Karakoy Fish Market – This small but exciting market is to the right before entering the bridge on the Galata (Karakoy) side.  Grab an authentic mackerel (or hamsi in season) sandwich.

Check out the fish restaurants at night here as well.

Belik Emek.  As you leave the bridge at Eminonu look to the right where the golden boats cooking Balik Emek Boats are moored.  This is a fun place to try a Turkish Fish Sandwich with lurid pink pickles in a cup on the side.  The boats look like a tourist gimmick, there are just as many locals having a good time here.

New Mosque, Spice Market and the Hidden Mosque (Rustem Pasha Mosque) are just a short walk from the Eminonu end of the bridge.

Suleymaniye Mosque and Grand Bazaar (also on the T1 Tram Line) are a little further uphill. 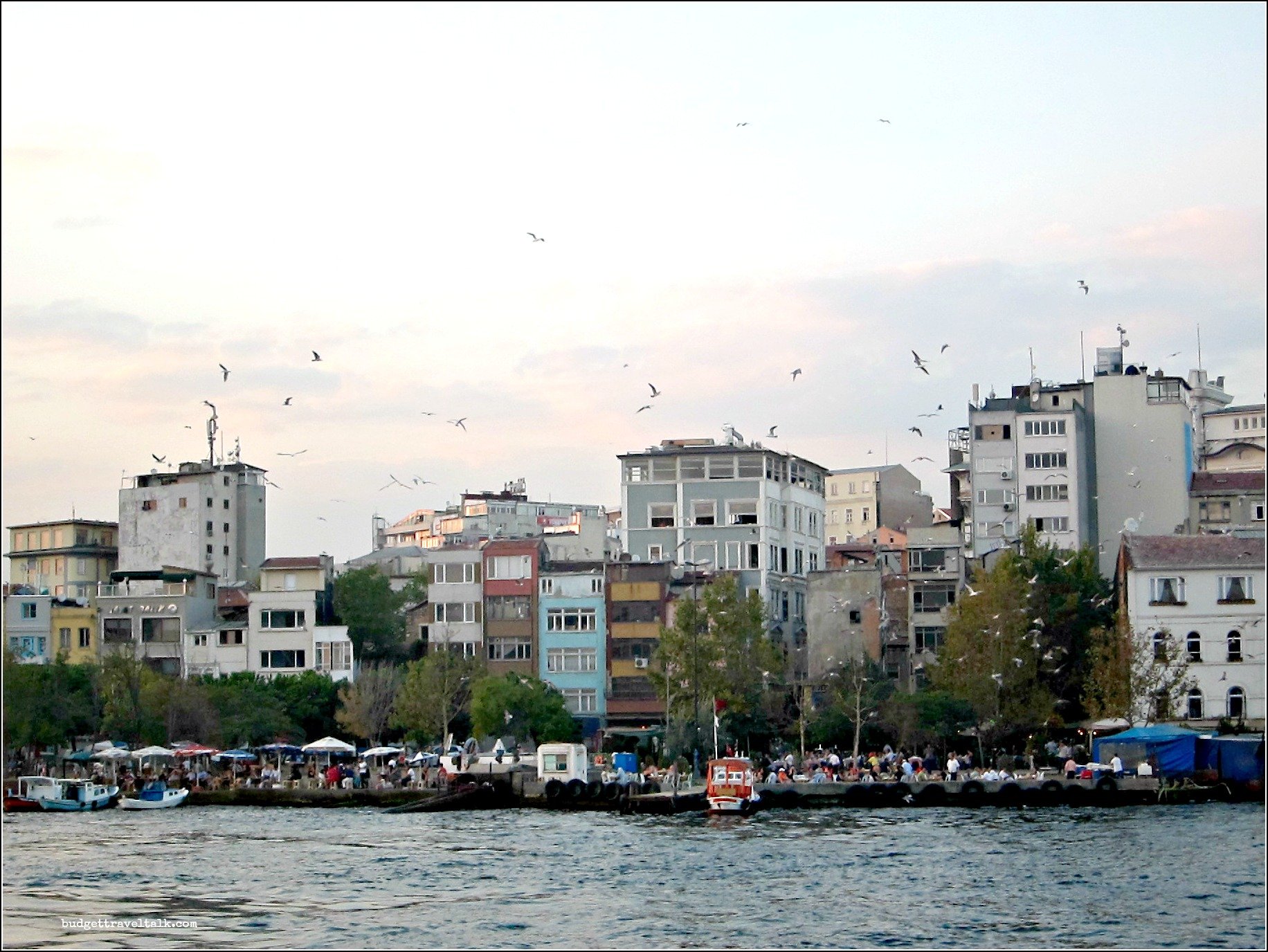 Before entering the bridge from the Galata Side, walk to the left to use the Karakoy Ferry Dock for connection to Kadikoy on the Asian Shore.

Continuing across the bridge to the Eminonu side turn left for Bosphorus Cruises, and ferries to Kadikoy and Uskudar on the Asian Shore (with bus connections to Cengelkoy).

Turn right off the bridge for ferries to the Golden Horn including Eyup  – walk through open air Eminonu Plaza and the bus parking area, passing the double storey car park to the shores of the inlet.

Ferry trips are a fun thing to do in Istanbul.

Take a Load Off – Catch a Tram.

The T1 tram begins at Kabatas on the Bosphorus and connects Galata (Karakoy) to Sultanahmet the historic centre of Old Istanbul where The Topkapi Palace, The Blue Mosque, Hagia Sophia, The Hippodrome and The Basicila Cistern (don’t miss it) are.  The section from Galata (Karakoy) to Sultanahmet takes 10 minutes and trams depart at 15 minute intervals.

Going in the other direction from Galata (Karakoy) on the T1 route leads to Tophane for the Istanbul Modern Art Museum and to the Kabatas Terminal for Dolmabahce Palace (5 minute walk) or connection to the Sea Bus Terminal for the Princes Islands, or the Funicular uphill to Taksim.

The Witt Hotels Magazine has the best T1 Tram Map for Tourists that I have found.

Read more before you go.

Introduction to Istanbul for the Frist Time Visitor written by Jenny from A Taste of Travel.  An ex travel agent, Jenny loves Istanbul and knows it well.

When I was deciding which area of Istanbul to stay in I found this article written by Sherry of Ottsworld very helpful.  Sherry stayed in three different neighbourhoods and spent time in four others.  She recommends Galata too!

We stayed in an AIRBNB APARTMENT near Galata Tower. 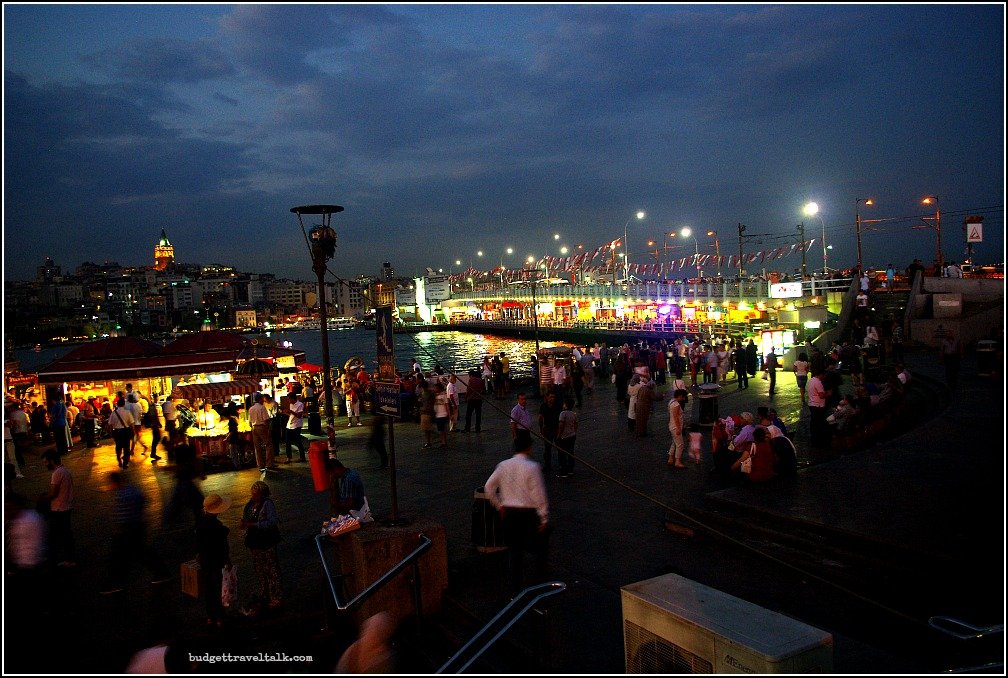 Looking Through the Chu-mon Gate at Ninna-Ji
Next Post: About Townsville