UPDATED MARCH 2018. Serendipity has influenced our travels before and it did so again during our two weeks in Kyoto.  Urgent family business called our Japanese friend to Lake Biwa only 15 minutes away from Kyoto and she was coming into the City to meet us. We were beyond excited and she was taking us to Kinkakuji Kyoto otherwise known as the Golden Pavilion, a much-loved Kyoto temple. (ji is a Japanese word for temple).

Reiko was raised in Kyoto and knows it well. As we walked through the historic lanes near our Airbnb share house in Southern Higashiyama, we decided on the plan for our day together. We would visit three temples across town in Western Kyoto, but first of all we side-tracked through Yasaka Shrine in Gion district, for a few tips on Shrine etiquette.

Having learned the intricacies of purification cleansing, bowing, clapping, bell ringing and prayer offering, we walked a well known path, beneath the red lanterns of Shijo Avenue, through the Geisha district of Gion to catch a train to Kinkakuji Golden Temple.

Kinkaku-ji or The Golden Pavilion or Rokuonji 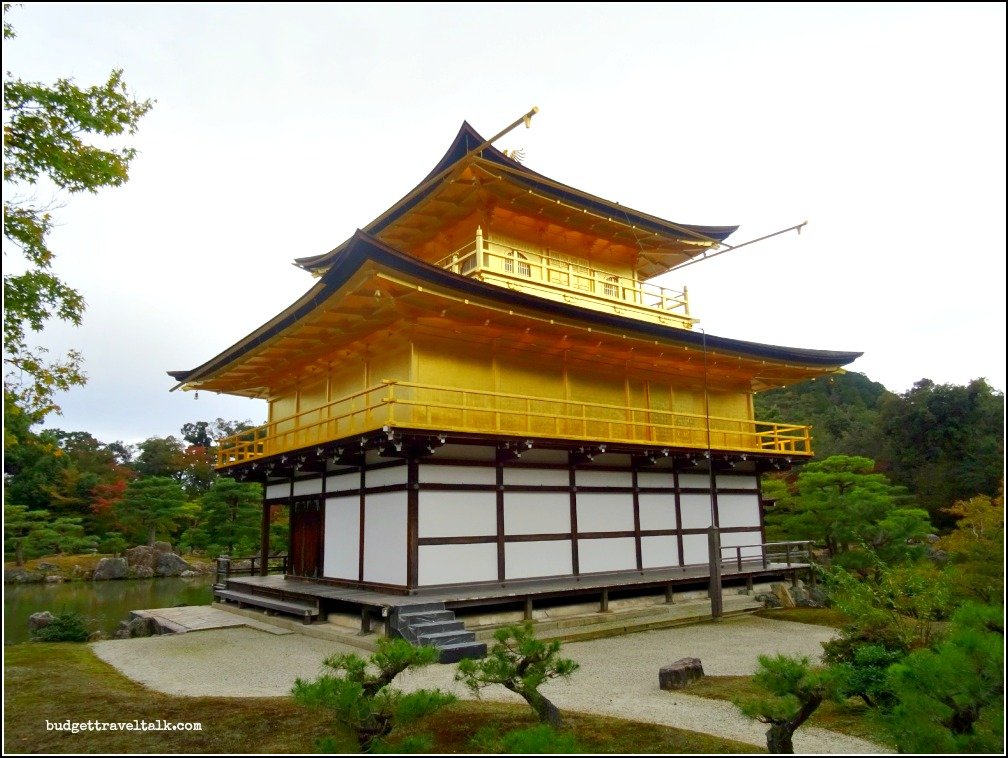 With it’s given name of Rokuon-ji (deer garden temple) and it’s common name Kinkaku-ji, the golden temple in Kyoto has a sparkling rich persona.

Kinkakuji history tells it was built in the Muromachi Period (1337 – 1573) and purchased in 1397 by Shogun Ashikaga Yoshimitsu. When he died in 1408 his son honoured his wishes by turning it into a Rinzai Sect Zen temple. It was been burned to the ground several times, most recently being rebuilt in 1955 (the year I was born).

Ashikaga Yoshimitsu’s grandson mimicked this building when he commissioned Ginkaku-ji, the Silver Pavilion across town in Northern Higashiyama.  The buildings both started life as a Shogun’s retreat before being converted at their request, to Buddhist Temples upon their deaths. 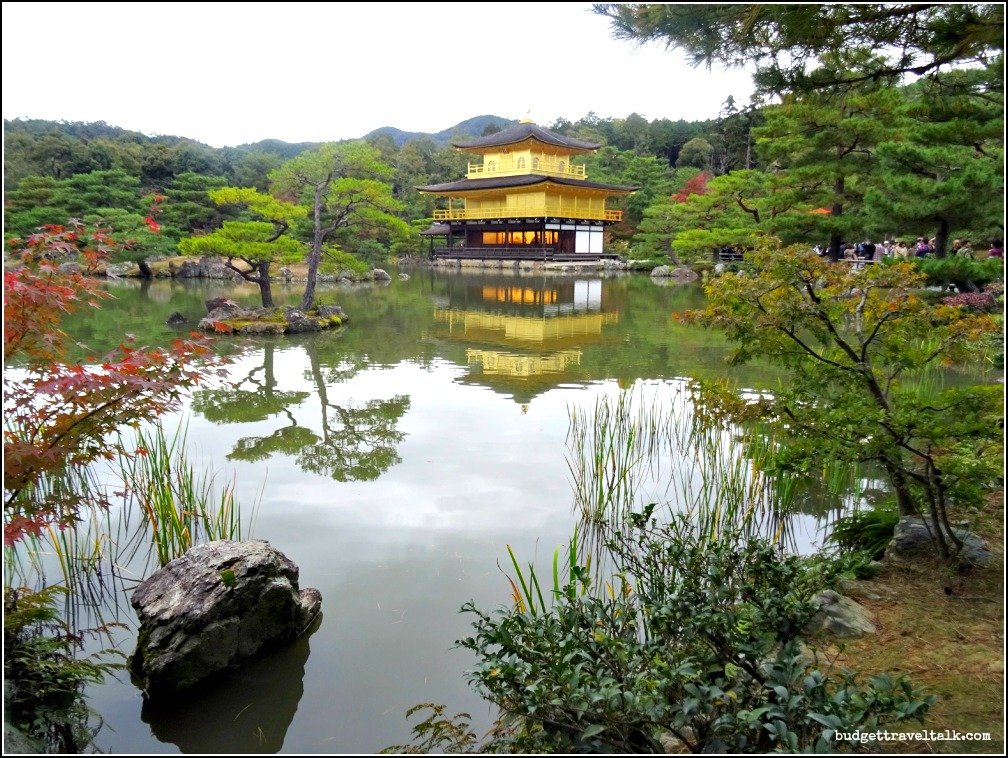 The temple with it’s shimmering reflection poses unashamedly for the six million people who flock here each year. The pond takes up a massive 60,600 square metres of the total 93,000 square metres of garden space. The islands, rocks and stones in the pond are part of the zen garden design, which looks particularly good from Sekka-tei Cottage at the back of the hill.

A blue sky would have showcased the golden building beautifully, but as it was the overcast skies provided brilliant reflections on the day.  The inside of the temple building was to remain a mystery, but with the building design, external glittering gold leaf, manicured gardens and well planned views from every angle, it was impossible to feel disappointed.

Understandably Kinkakuji is not open to the public, but a lot can be learned about the building from the outside.

The Ground or first floor known as the Chamber of Dharma Waters.

Built in the Palace or Shinden style, this floor reflects a noble residence of 1000 years ago. It has open space, and verandahs. The timber is left natural, contrasting with the gold above. Statues of Shaka Nyorai, the historical Buddha and second owner Yoshimitsu can be seen within by camera zoom or binoculars.

Second floor known as the Tower of Sound Waves.

Built in Sumurai Aristocrat style, this floor has sliding timber doors and latticed windows and represents a more relaxed homestead style. There is a Buddha Hall, bodhisattva Kannon or Goddess of Mercy Shrine surrounded by Shitenno (Four Heavenly Kings).

Third Floor known as Cupola of the Ultimate.

Built in Chinese Zen style, contains the ashes of Sakyamuni Buddha, the founder of Buddhism. Zen Buddhists practice Zazen as particular meditation. The internal walls are also covered in gold leaf on this floor.

The temple is crowned by a bronze Chinese Phoenix attached to the shingle roof. Is it just coincidence that the Phoenix represents rising from the ashes?

The Gold Leaf shines brighter than ever since the 1955 rebuild when the thickness was increased. Interestingly, in Japan gold is believed to mitigate and purify any pollution or negative thoughts and feelings towards death.

Even though the viewing area on the pond becomes crowded with visitors, it is fairly easy to burrow through to the front for an uninterrupted view.

We found Temple crowds in Kyoto were unfailingly happy, fun loving and polite. 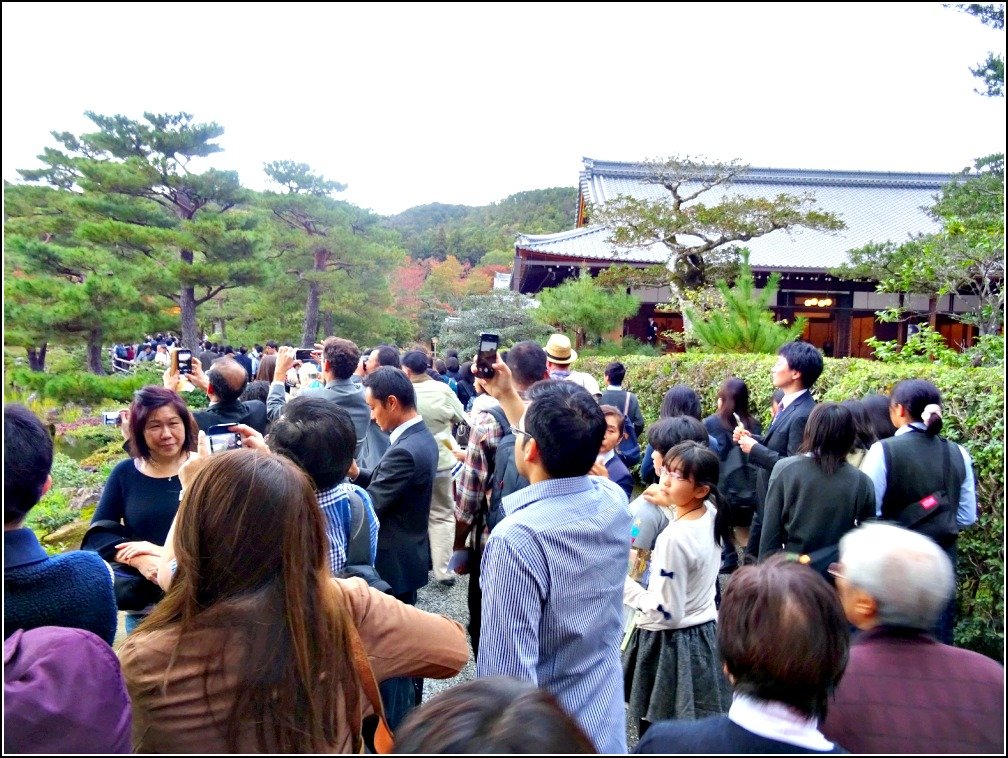 The far end of the path on the lake frontage was blocked off so we followed the path to the back of the pavilion, checking out the enormous carp that broke the surface looking for food. Fish feeding was forbidden but the Carp didn’t seem to know.

From the rear of the building the path takes a circular route through the gardens with the exit steps meeting with the entrance path outside the temple walls. 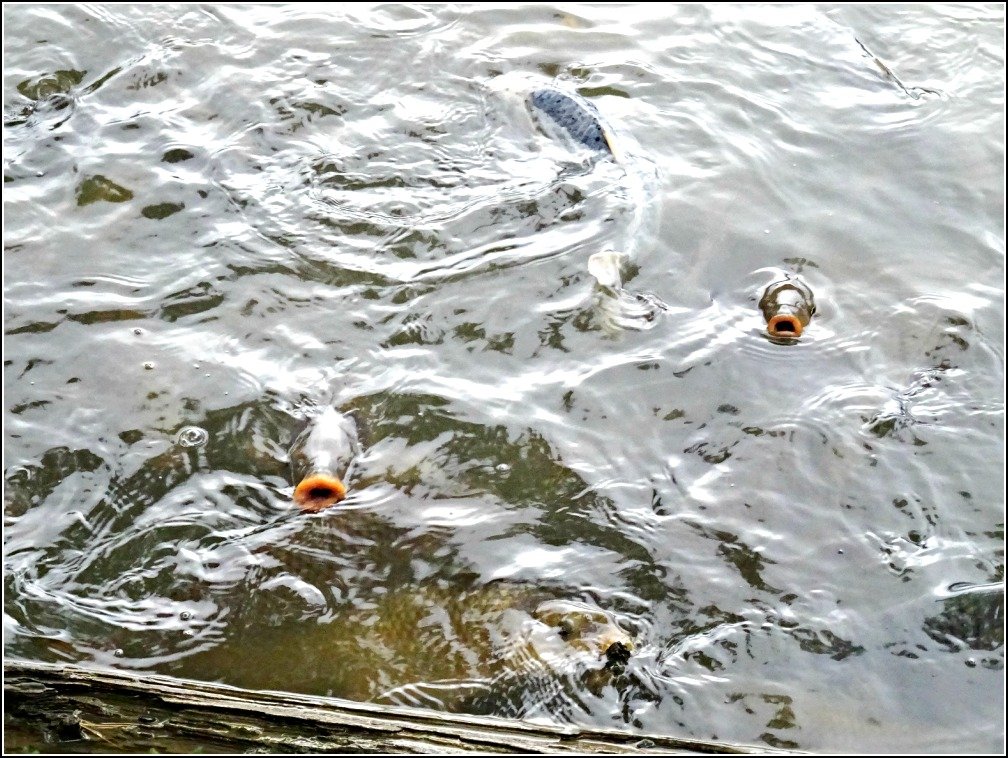 Walking behind the temple gives a more up close and personal view. A fishing platform is attached at the back, the only break in the square pattern.

The design allowed for sliding walls and moveable shutters to frame the views.  It would be a beautiful place to live. 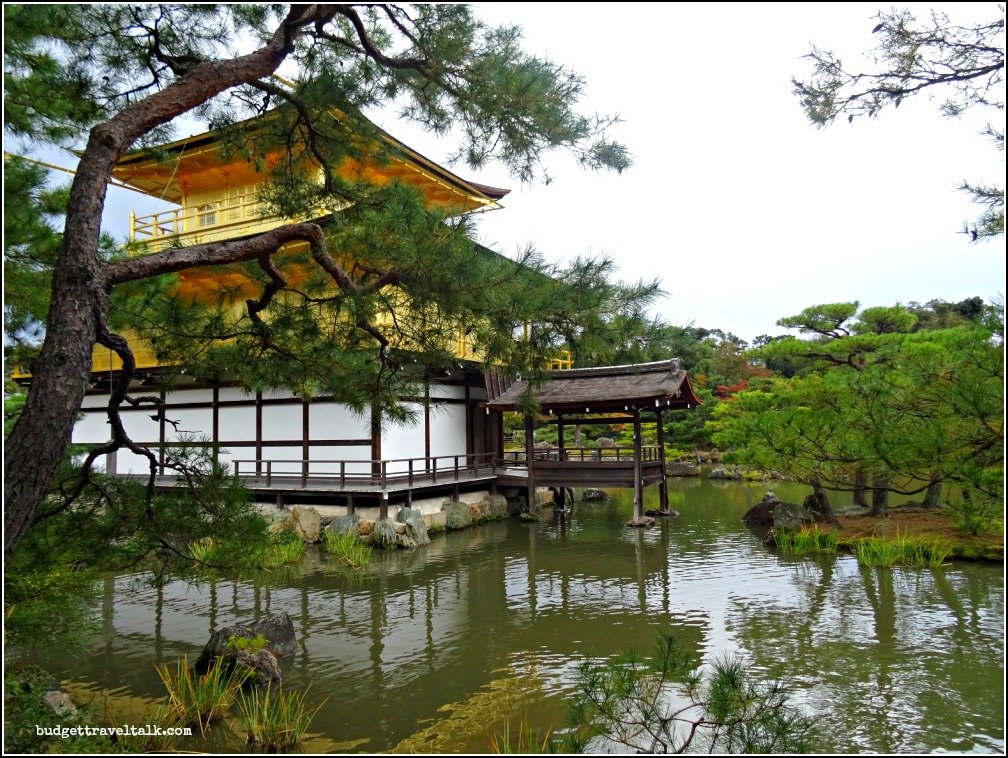 Rigyo-seki – Carp Stone.  There is a legend that says a fish that swims up a waterfall will be turned into a dragon. The stone that the water falls on is symbolic of a carp and represents strength. 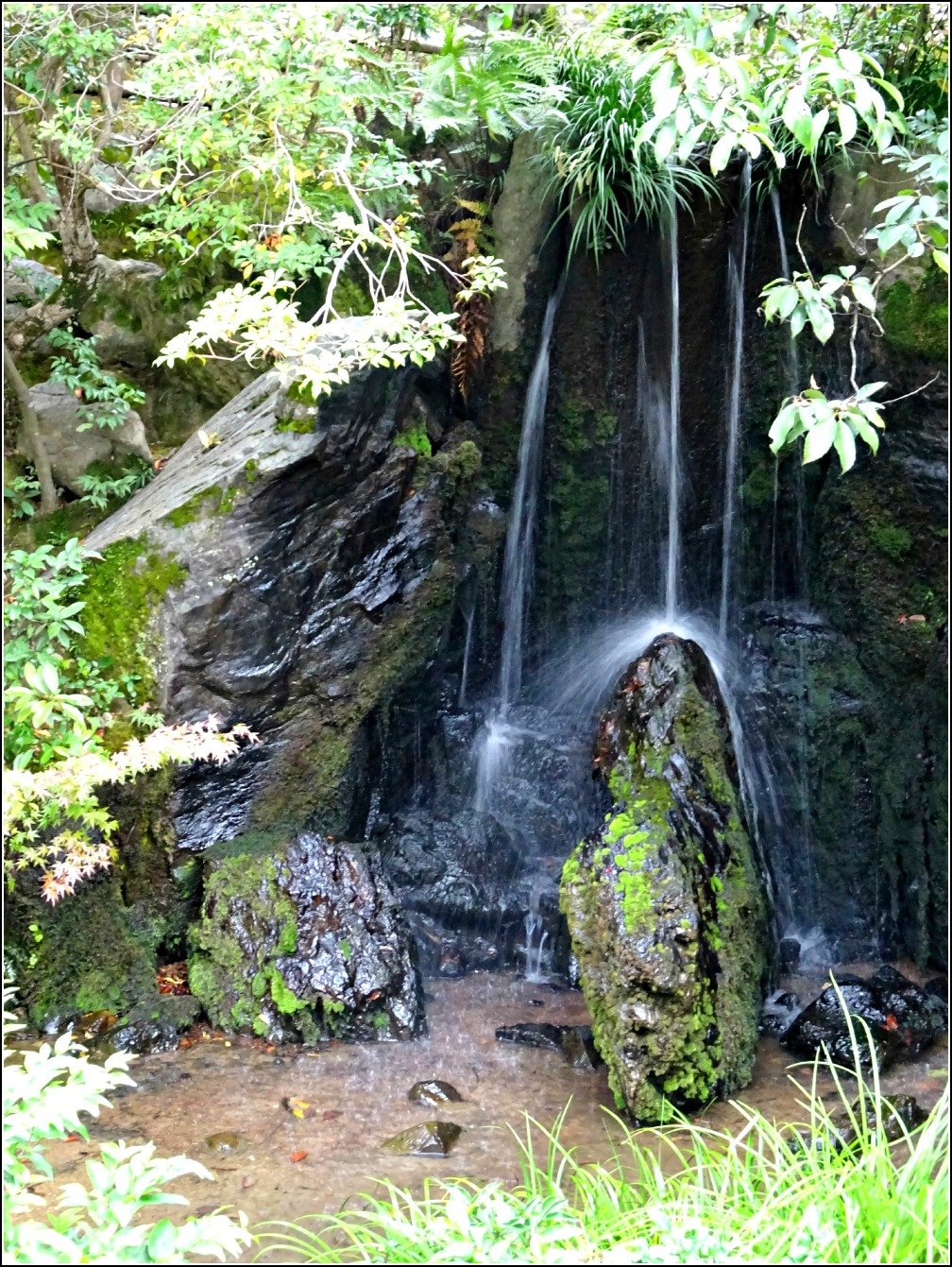 There was a feverish interest in throwing coins for luck.  Everyone seemed to be going for the bowl – I wonder if it was the Lucky Jackpot? 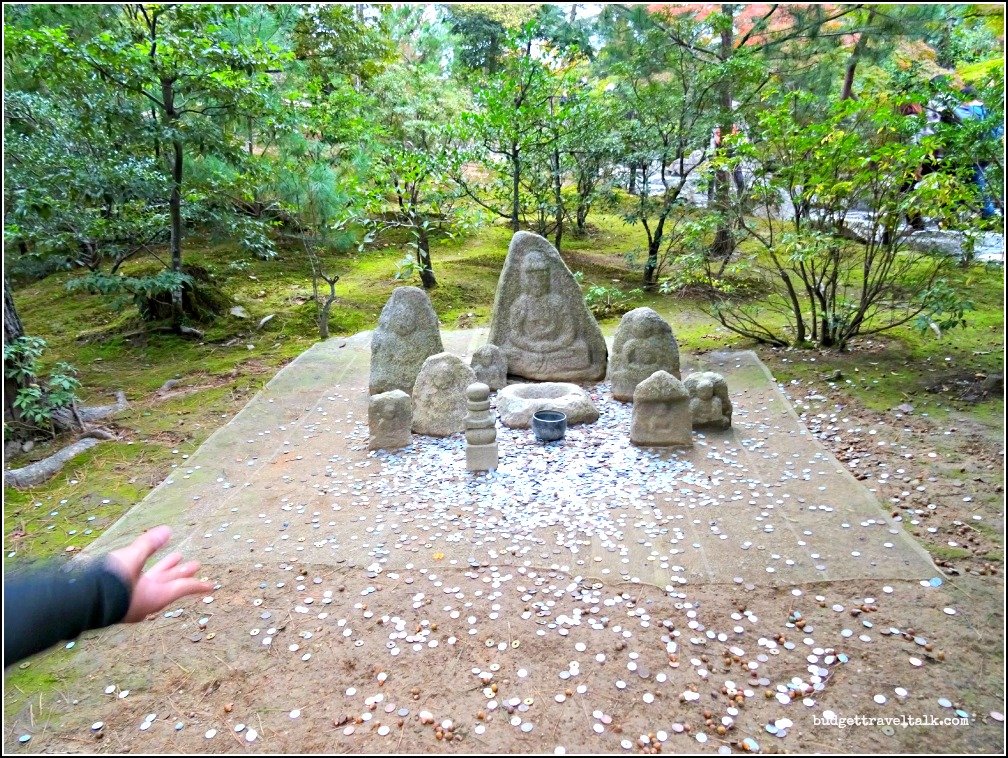 The circular path through the gardens offered views back to the temple. I think this view, with the top floor peaking over the tree tops is a beautiful one. The circular route is a brilliant idea as it smooths the flow of people. I can only imagine how chaotic it would be, with people walking in both directions. 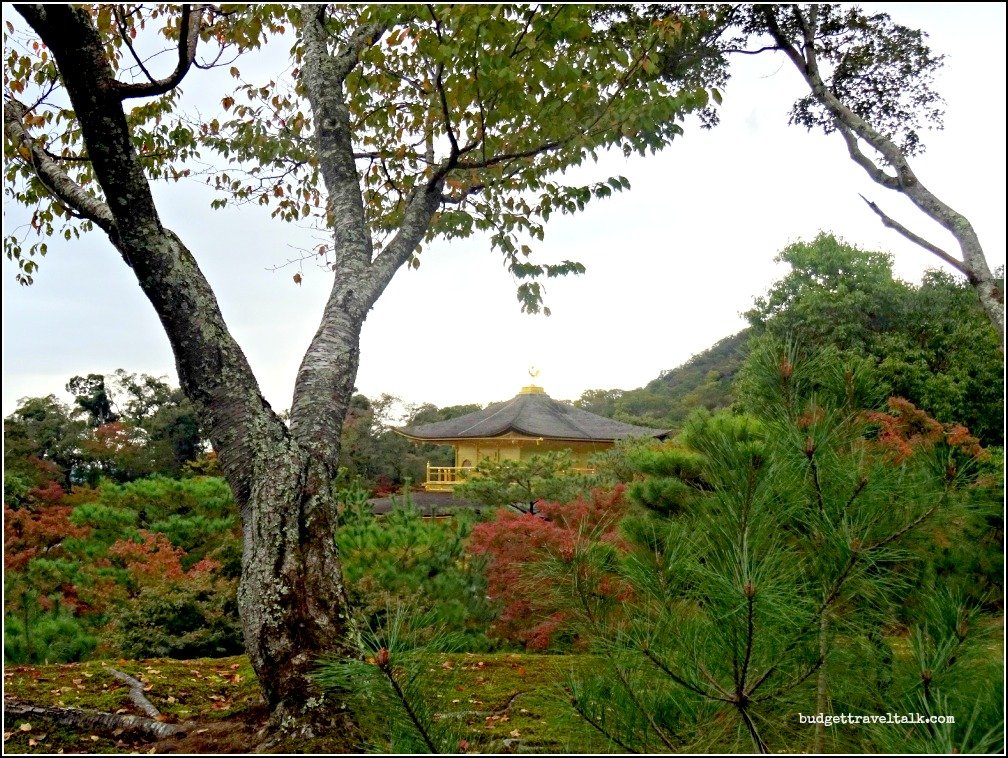 Sekka-tei – a traditional tea ceremony house – a rebuild after the 1884 fire. The tea house might seem a little drab, but this only points to the importance of the sacred tea ceremony. 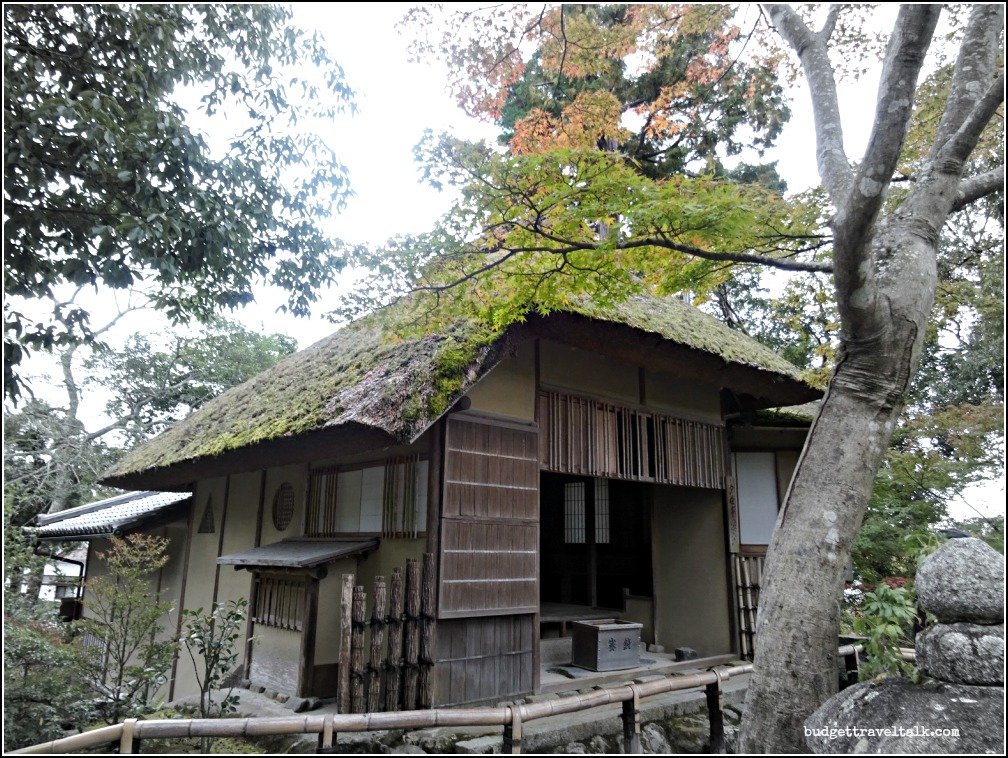 At the end of the walk is Fudo Hall, a place to light incense, ring the bell and ask for blessings.  The hall houses a venerated statue (by Kobo Daishi) of Fudo Myoo one of the Five Wisdom Kings who protect Buddhism.  Myoo is also patron of the Zodiac Year of the Rooster.

Can you see the lit prayer candles and ema prayer tablets hanging in the photo below. Both are on sale. 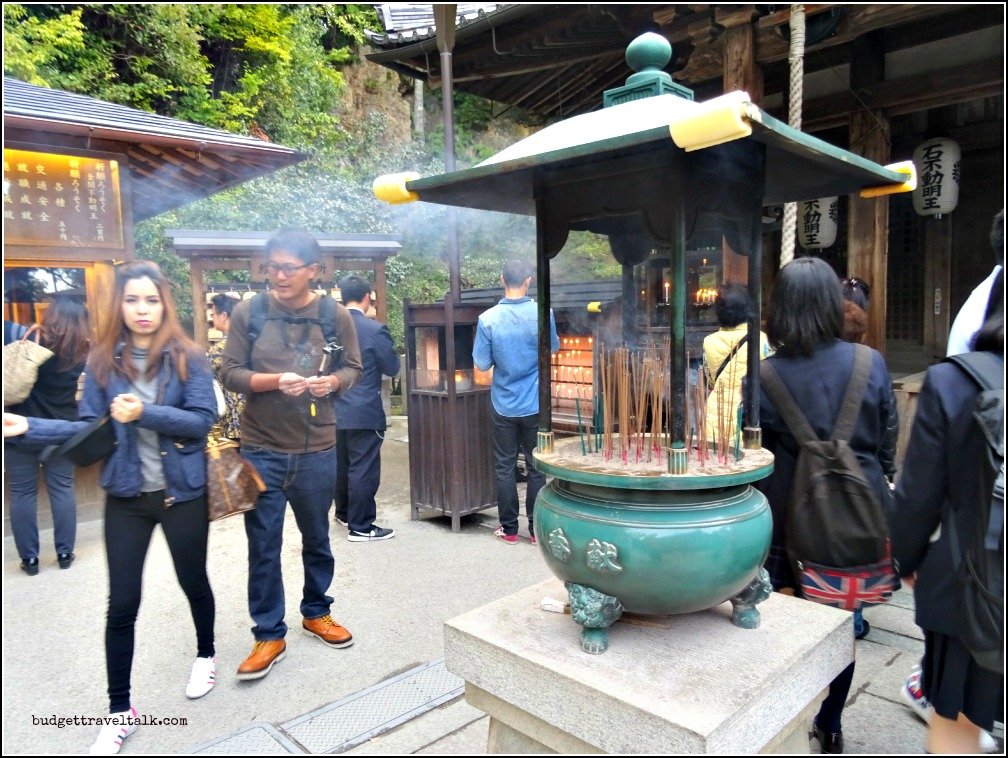 The Market stalls near Fudo Hall sold sweet dumplings.  We tasted the black sesame, a flavour that I liked in Japanese Sweets – particularly in ice-cream. 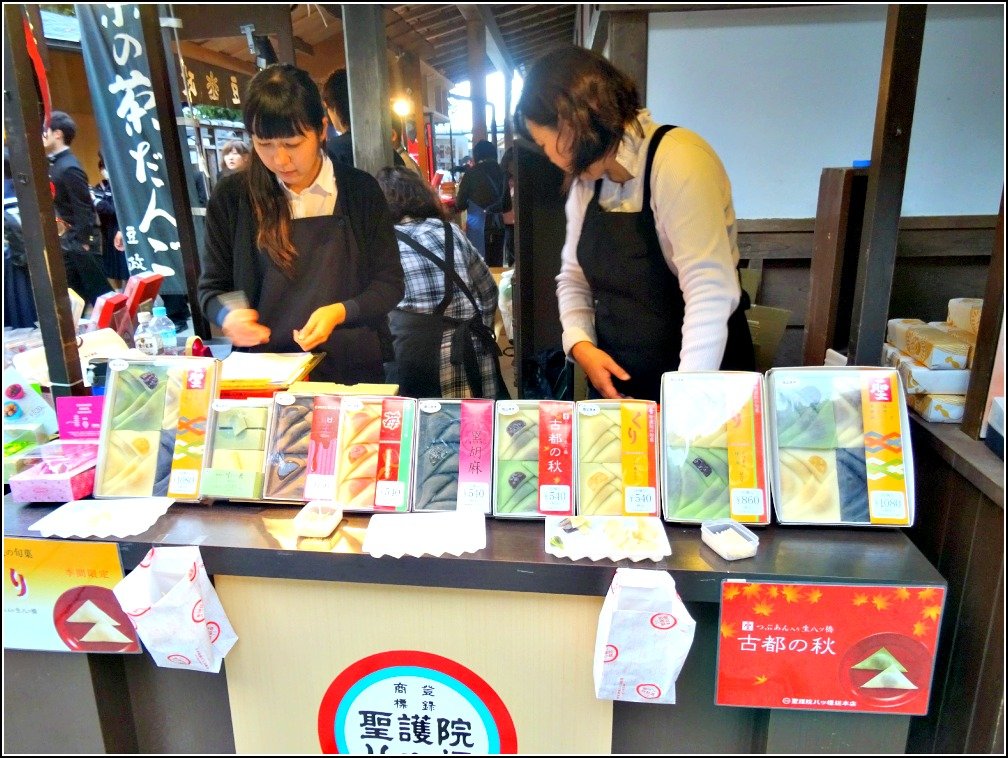 See the five white lines on the Exit wall?  They denote Imperial Status and can be found on similar temple walls around Kyoto.

Look out for the Wasabi Peanut Vendor at the bottom of the stairs.  For 300Yen a bag of these sinus clearing nuts are a must.  We brought packets of them home but now I must find an on-line supplier and fast. 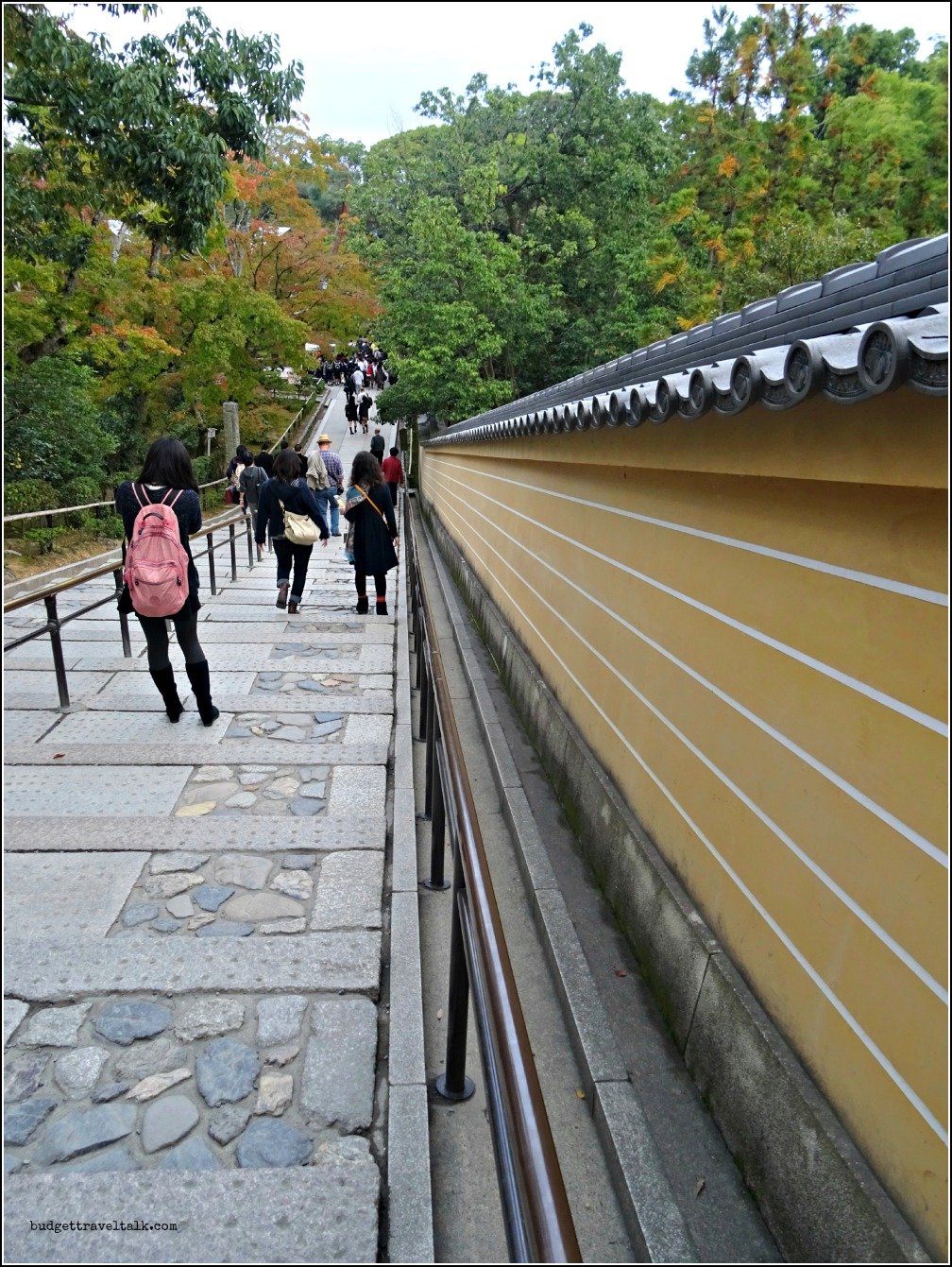 The Golden Temple Kyoto, is one of thirteen Buddhist temples, three Shinto shrines and one castle that comprise the seventeen sites known as The Historical Monuments of Ancient Kyoto Unesco World Heritage Site.

Things to Know before you Go.

When to visit Kinkakuji Kyoto for photography.

Autumn for the fall colours, early April for cherry blossoms and Winter when it looks completely different but beautiful covered in snow. When the sun is setting is another good time. Keep in mind that the sun sets a little earlier here because of the nearby mountains. The temple and pond are a picture-perfect photographer’s dream.

How to get to Kinkakuji from Kyoto Station.

Or ride an historic tram to access Kinkakuji. We tell you how HERE.

9 am to 5 pm each day. Allow 60 minutes to walk through, take photos, ring the bell and buy some snacks to go. Allow a little more if crowded. An early visit on a week day will result in fewer crowds.

Kids will love it here. There are huge carp which are clearly visible and breaking the surface of the lake near the shoreline. They will love throwing coins at the Jizo. (bring small denominations). There are sweet biscuits and other snacks to buy at the end.

Don’t bring a pram or stroller as there are quite a few stairs.

A Kinkakuji temple ticket which covers everything except entry into the temple (not allowed) 500 yen.

Swimming in Paradise at Paradise Lagoon Townsville
Next Post: Ninna-Ji the laid back temple of Kyoto