The aged and in places crumbling exterior of La Mezquita in Cordoba, Spain, holds no clue as to the amazing sights that await within. 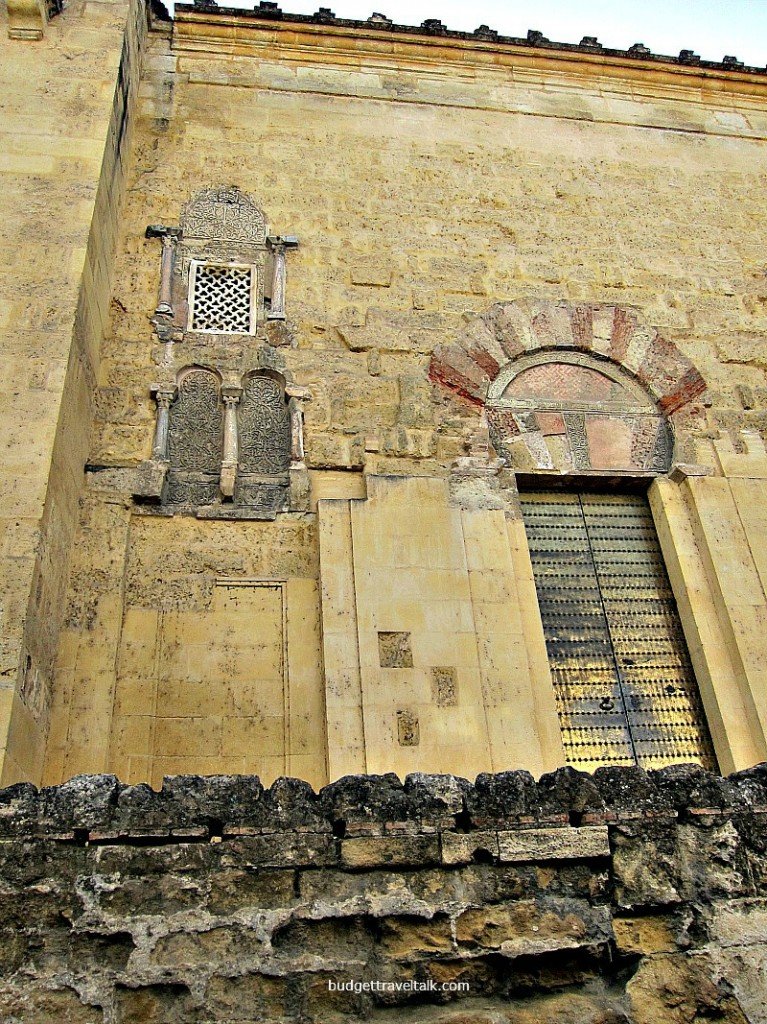 There have been a myriad of places of worship built on this site.  First of all the Romans built a pagan temple, then during the years 600 to 987 the building progressively changed from being the Visigothic Christian church of St. Vincents, to a half Christian half Moslem place of worship, and finally after the Moors purchased the Christian half,  a mosque.  By 987 it had been enlarged, and the outer courtyard and naves added, becoming the largest mosque outside of Arabia. As well as it’s primary role as a mosque, it was used as a meeting place and a school.

After the Christians won the war and the Moors were returned to Africa, it was converted to a Christian Church (1236).

In 1236 however, the inside of the mosque still looked much the same as when the moors had it, even though the naves had been enclosed with chapels for the saints, and another two chapels were incorporated into the then new al-Hakem II extension.

In 1523 the Cathedral Chapter, backed by King Carlos V himself over-rode the Cordoba Council’s objections and decided to build a large Gothic/Renaissance chancel in the very middle of the mosque.   It was brought about by pride – rival cities Granada and Sevilla had both recently built grand cathedrals. Later, the King who had not even seen the mosque beforehand, did a backflip and declared “You have built here what you or anyone might have built anywhere else, but you have destroyed what was unique in the world.”  (I guess only a King could get away with that!)

Despite the fact that Moslems are not allowed to worship at the mosque (cathedral) today, it is still known by local catholics and the world in general as La Mezquita – The Great Mosque of Cordoba.

The local saying “Voy a la Mezquita a oír misa – (liberally translated) I went to Mass at the Mosque  seems so typically Spanish, it makes me smile. 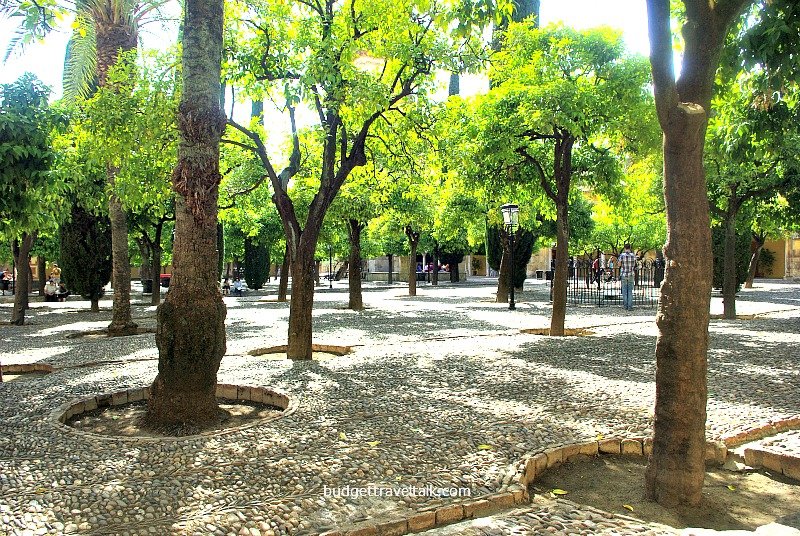 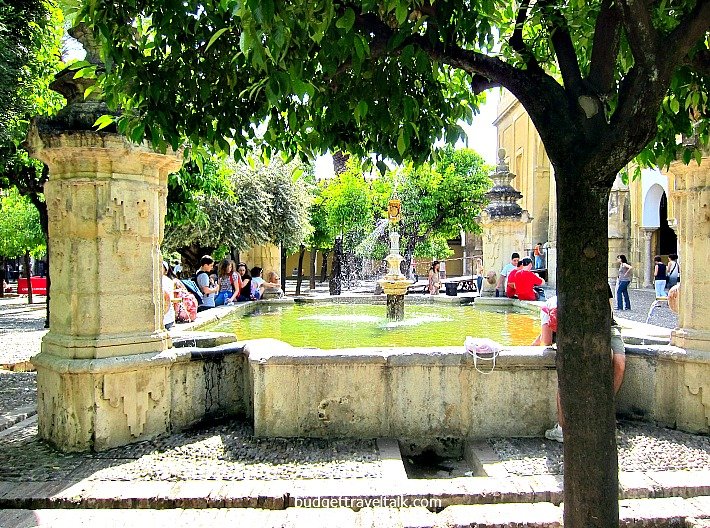 Originally all nineteen naves were open to the courtyard, allowing the sunshine to light the interior.  Since the naves have been closed (see photo below) natural lighting is reduced inside the mosque, which today is achieved  from the windows in the four cupolas and from thousands of small oil lights. 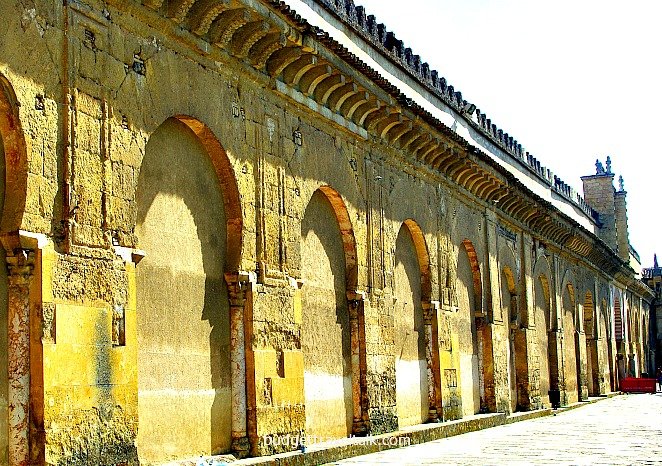 There are more than 850 coloured granite jasper and marble pillars remaining of the original 1200.  A lot of these pillars came from the original Church of Saint Vincents, some from Roman and Visigoth homes in the area, and some donated by the Byzantine Emperor in Constantinople.  The remainder were manufactured by the Moors. 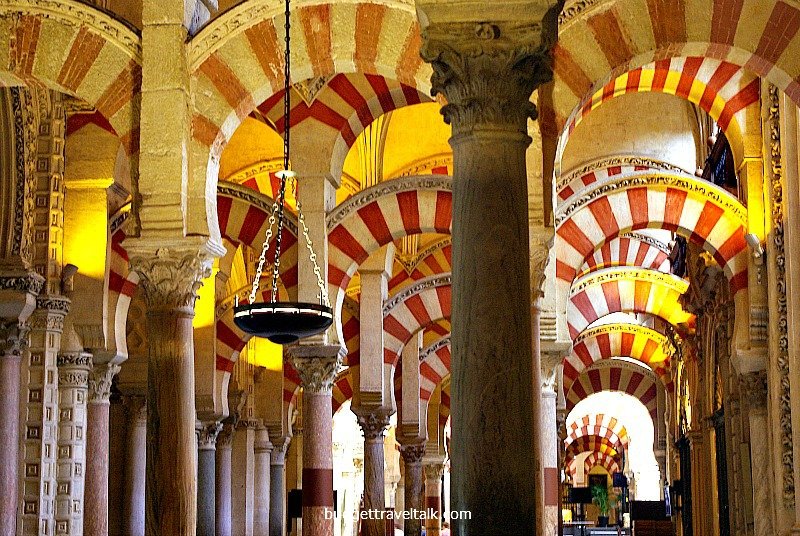 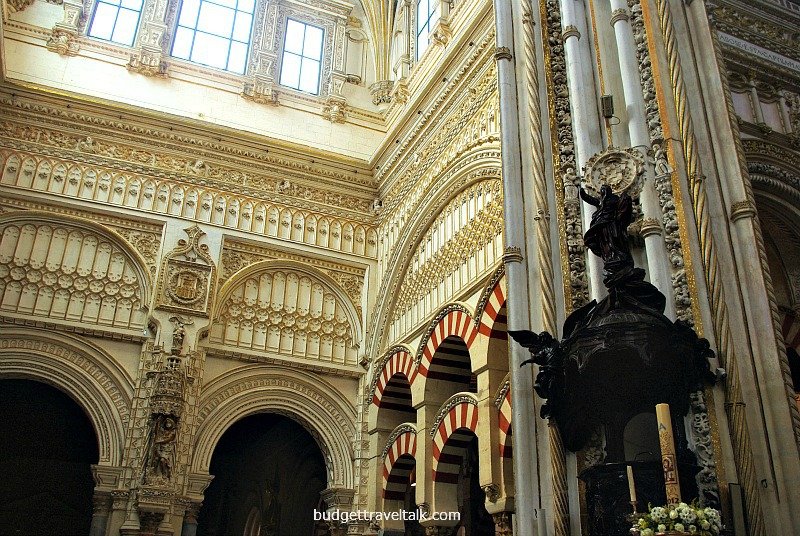 I would have loved to have seen the arches as they were meant to be.

After the ritual cleansing at the courtyard fountain worshipers would make their way through any of the nineteen arched openings – walking beside the tree-like columns that at first filtered the sunlight, and then into the cooler shadows within to pray.   It was a huge unfettered expanse of columns and arches.

But there it is today – a cathedral within a mosque – and it is a very beautiful building still. 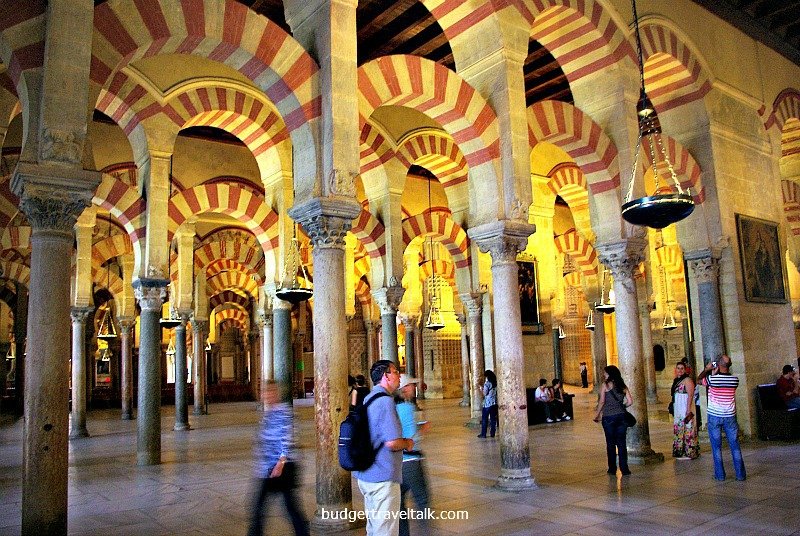 We wandered through arches and peered into chapels and let a feeling of awe wash over us. 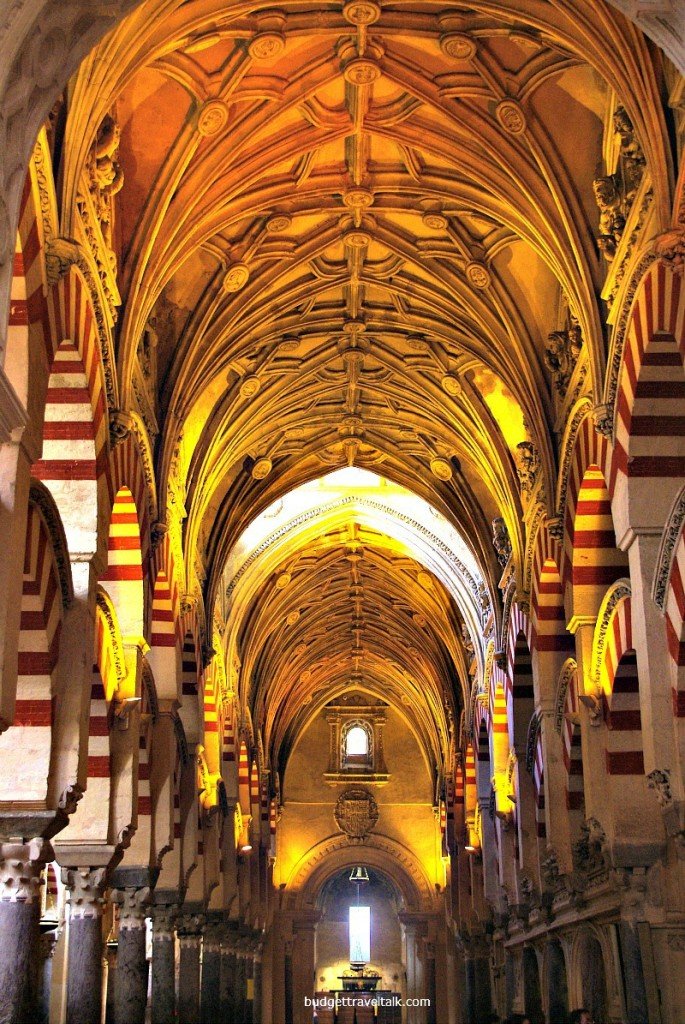 The double tiered arches were designed to create a light airy feel within the extended low ceiling of the mosque. 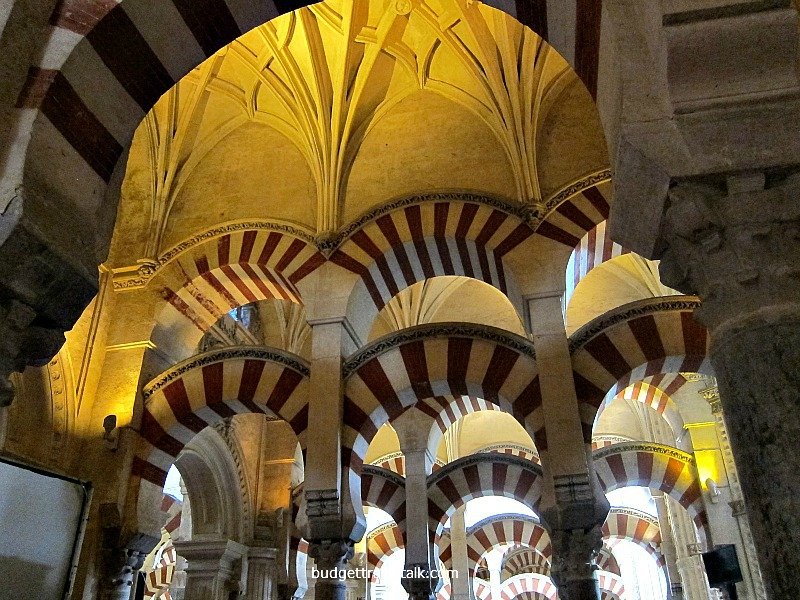 We were at La Mezquita on 11th May, 2012, when some areas were blocked off and chairs were placed in preparation for an event.  Later that night we were mesmerized by the exterior facade of the mosque. 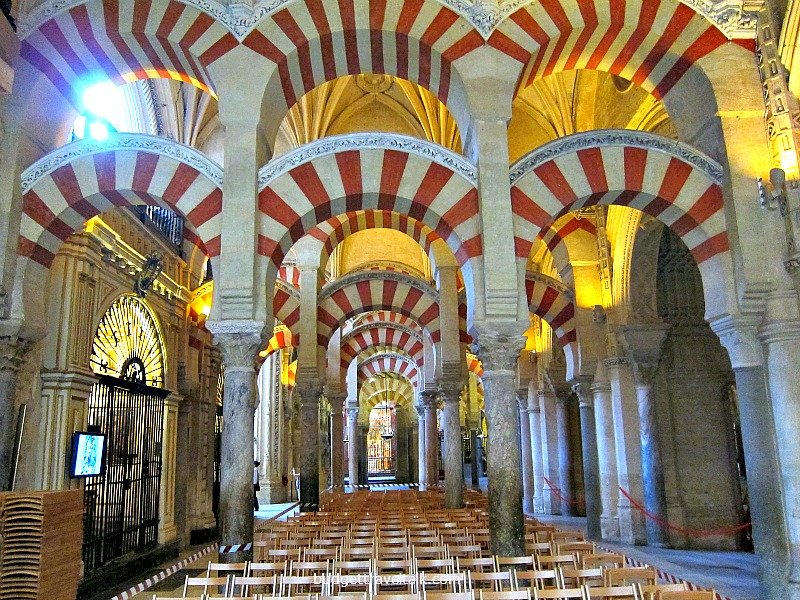 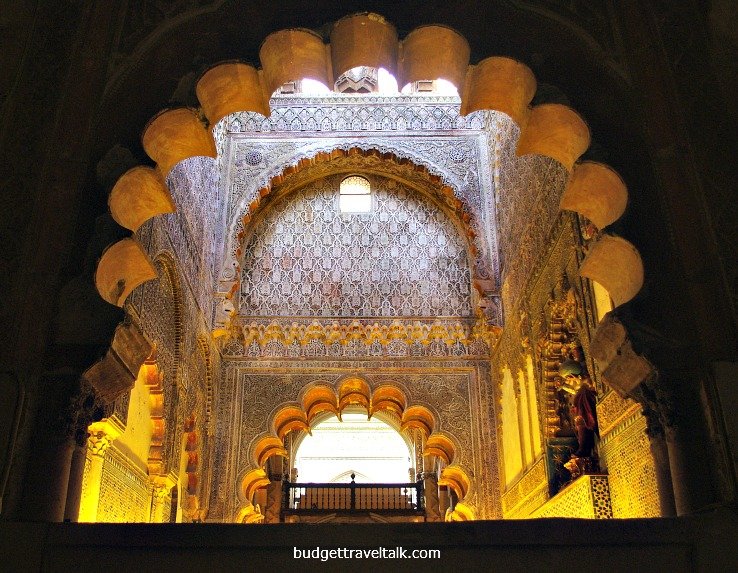 The photo below looks through the arches of the mosque toward the chancel in the middle. 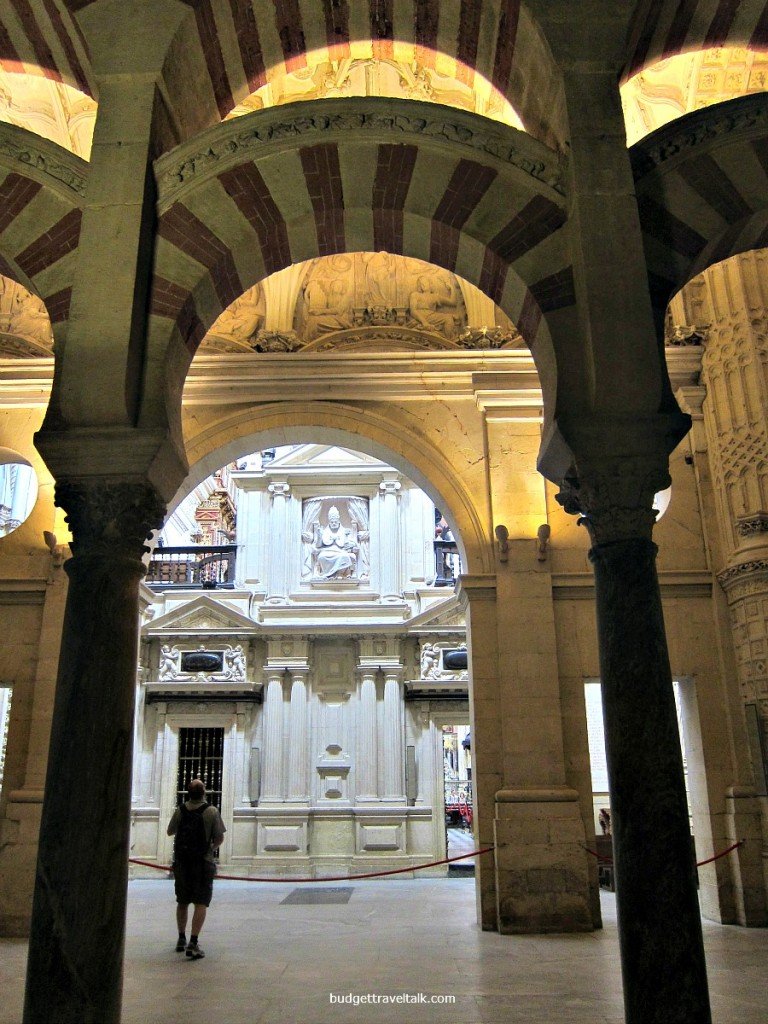 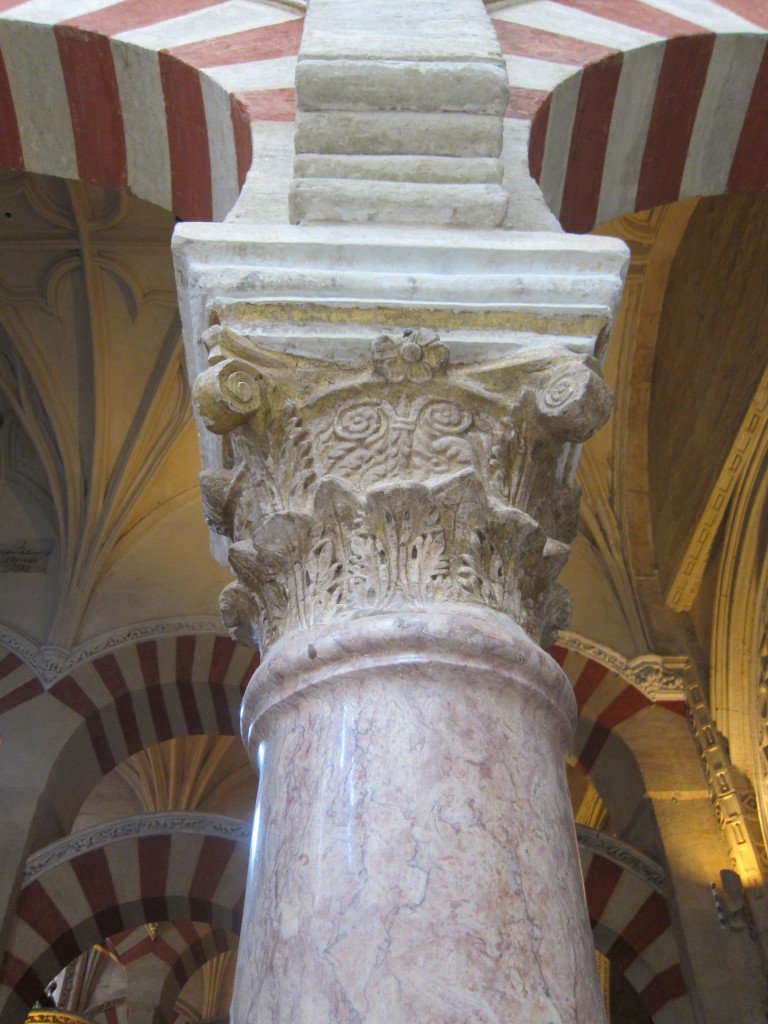 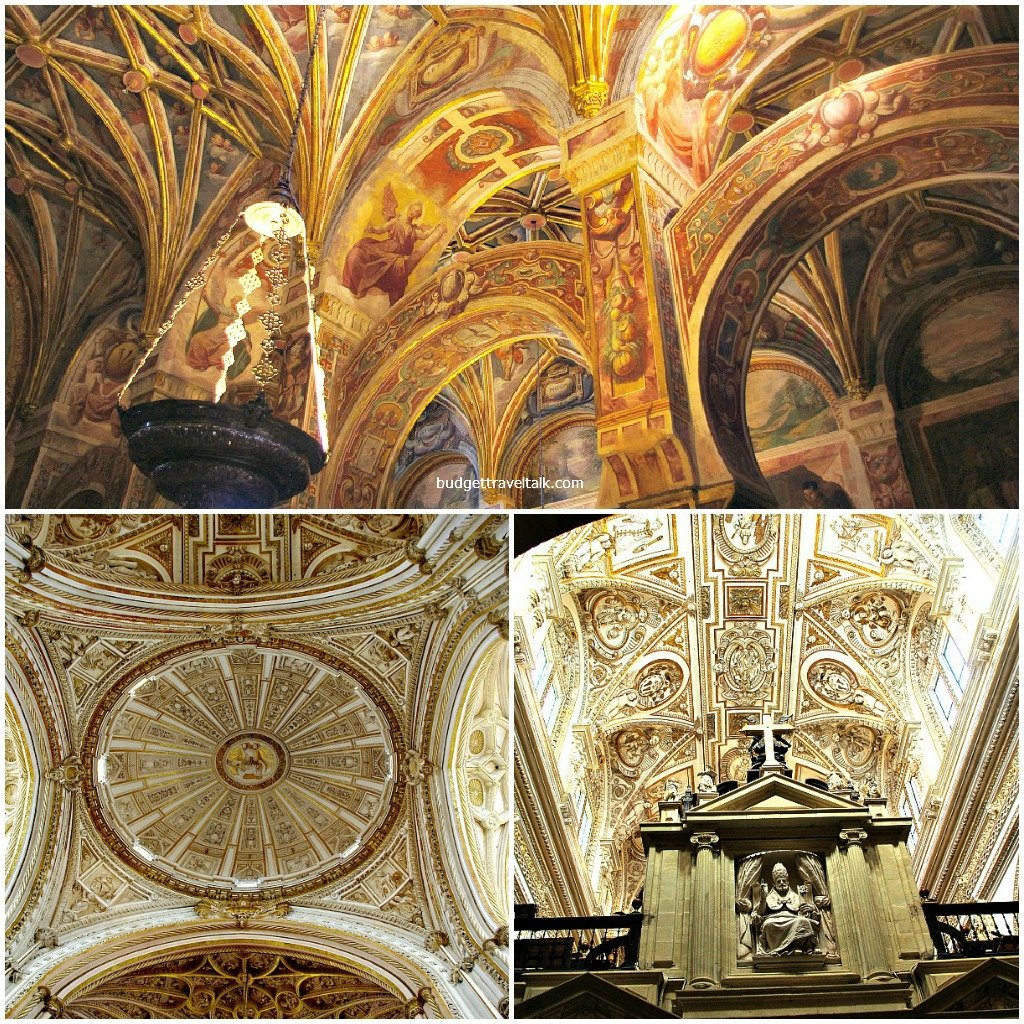 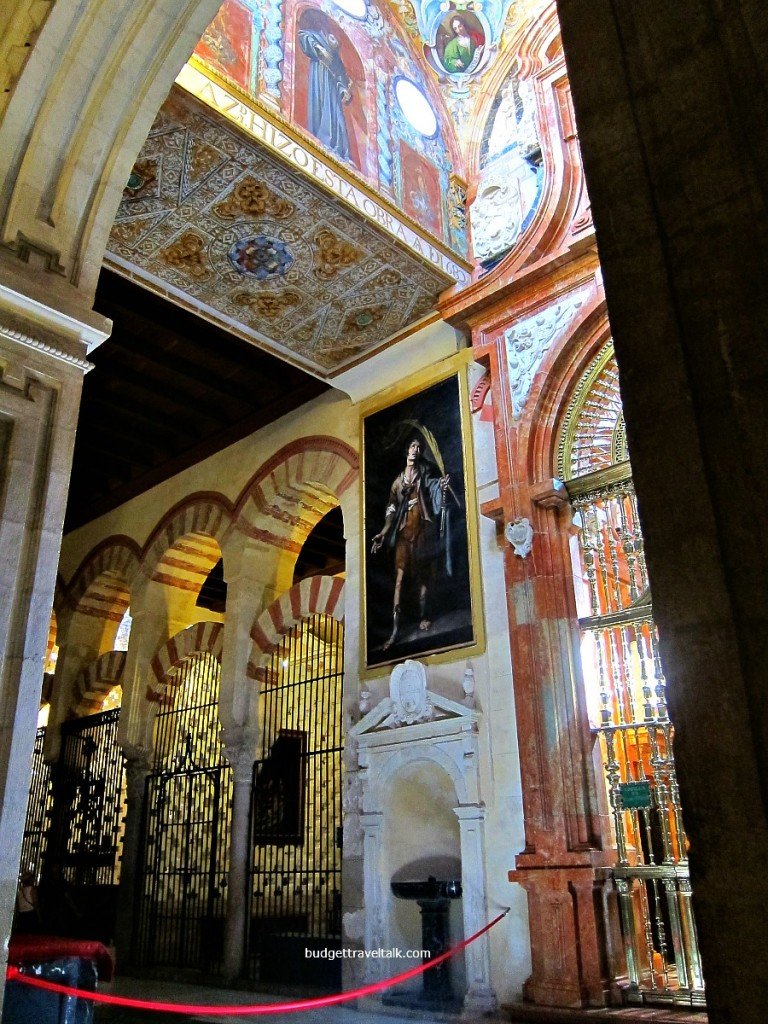 The original minaret was built over and encased by the Bell Tower.  There are fourteen bells in all and they ring on the quarter hour.  Repairs were carried out after the Lisbon earthquake in 1755 and it was restored again in the 1990’s. 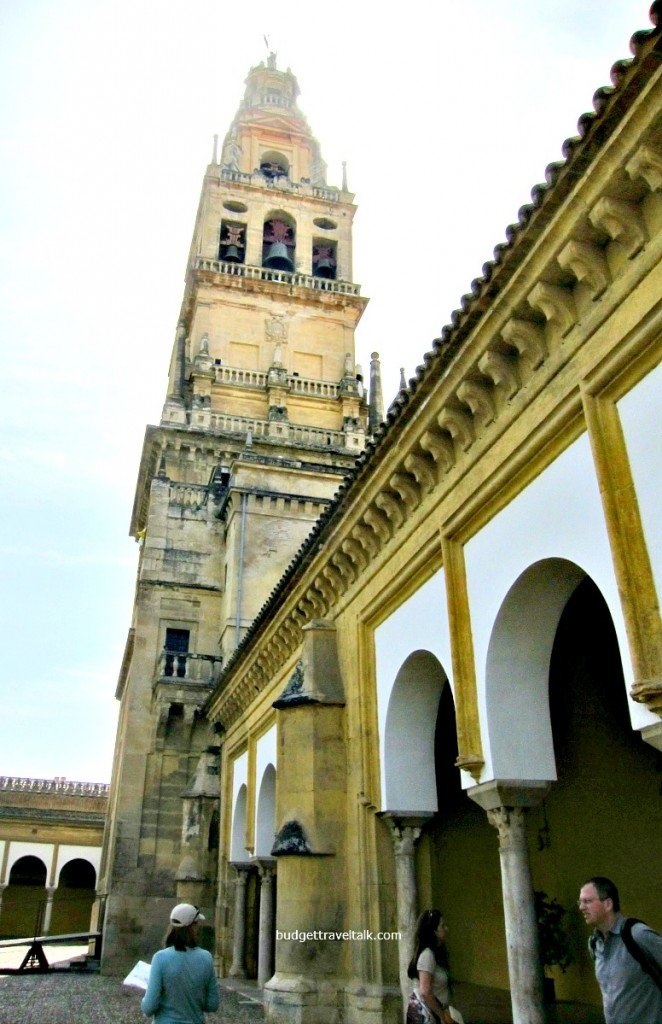 La Mezquita has had it’s fair share of religious see-sawing in the past.   In a perfect scenario, the Cathedral would have been built on a different site, but in the middle ages there was no concept that there could be more than one truth, so it was common to pull down one place of worship to build another belonging to the conquerer.

It would be wonderful if our world could evolve to enable this much loved place of worship to be once again shared between Moslems and Christians.

I, for one am very thankful that the residents of Cordoba, in 1236 and 1523, knew the value of their mosque and refused to let it be pulled down to build the Cathedral.  At first glance the cathedral within is a monstrosity, but at least La Mezquita did survive albeit in an altered form.

Historical information was gained from Spain Then and Now, and andalucia.com.

Entry into the Patio de los Naranjos is free.  Tickets for entry into La Mezquita are purchased inside the courtyard on the right.