Even though we knew we had to be in position by 6 a.m. to see Tak Bat, (the monks receiving alms from the public), we managed to arrive late.  This gave us an unconventional view of the early morning ritual – that of following along behind the monks – and they set a mean pace I can tell you.  I guess we would too if we were on our way to get our first of only two meals for the day.  Oh well, we could look upon it as research – at least we knew the route they took now. 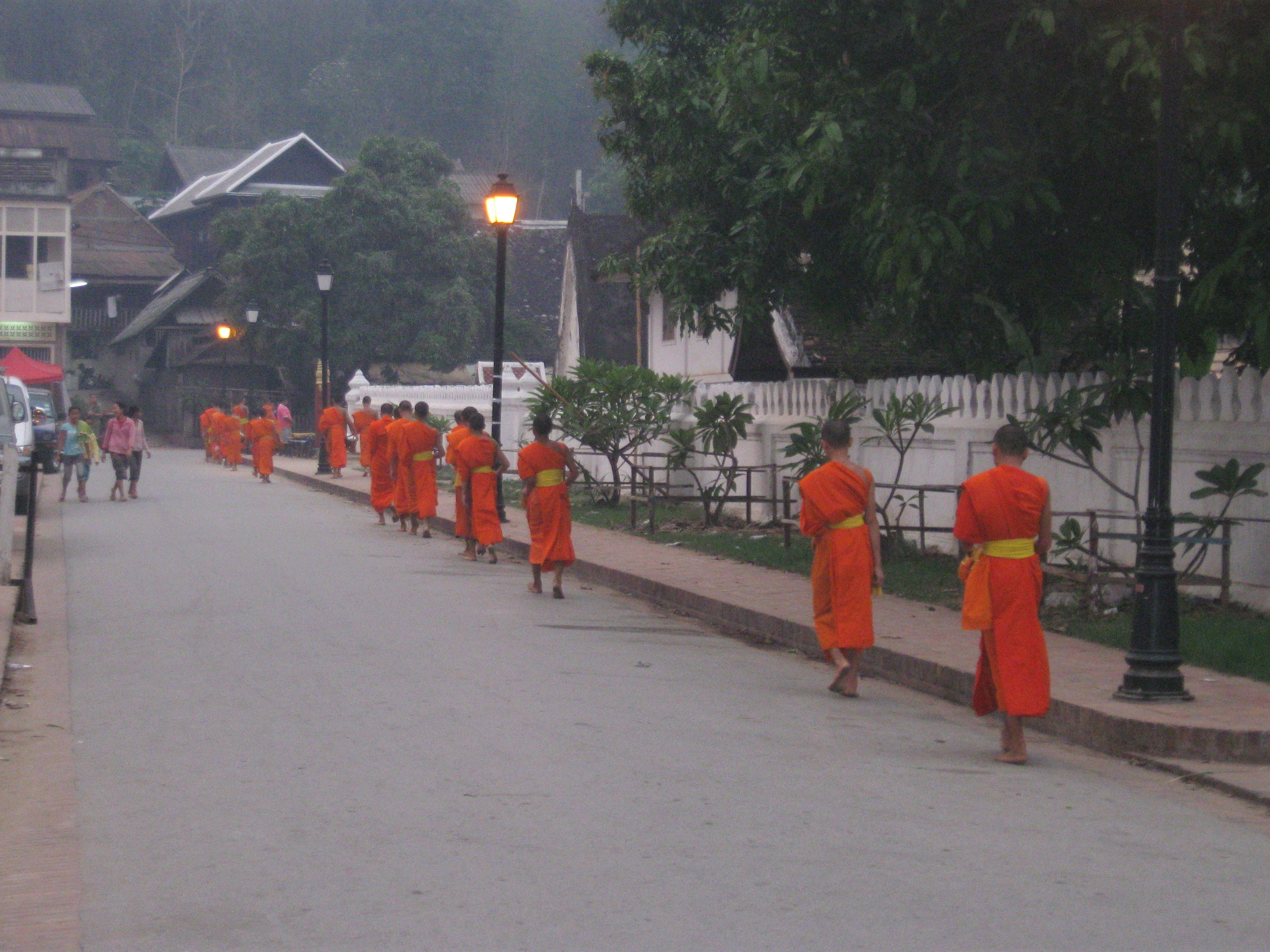 Our second attempt at Tak Bat, happened on our last day in Luang Prabang.  As is the case when we are leaving a place, we had jumped out of bed, eager not to miss anything that our last morning might bring us.  Thankfully we were in place at Wat Mai, the local Wat in Ban Pakham, when the monks arrived this time.  I don’t believe in getting in people’s faces when I take photos, especially not at a religious event, so our photos were from afar on full zoom, so are not that clear.  I felt privileged to experience this daily ritual that is so vital to the monks and means so much to the Laos people. 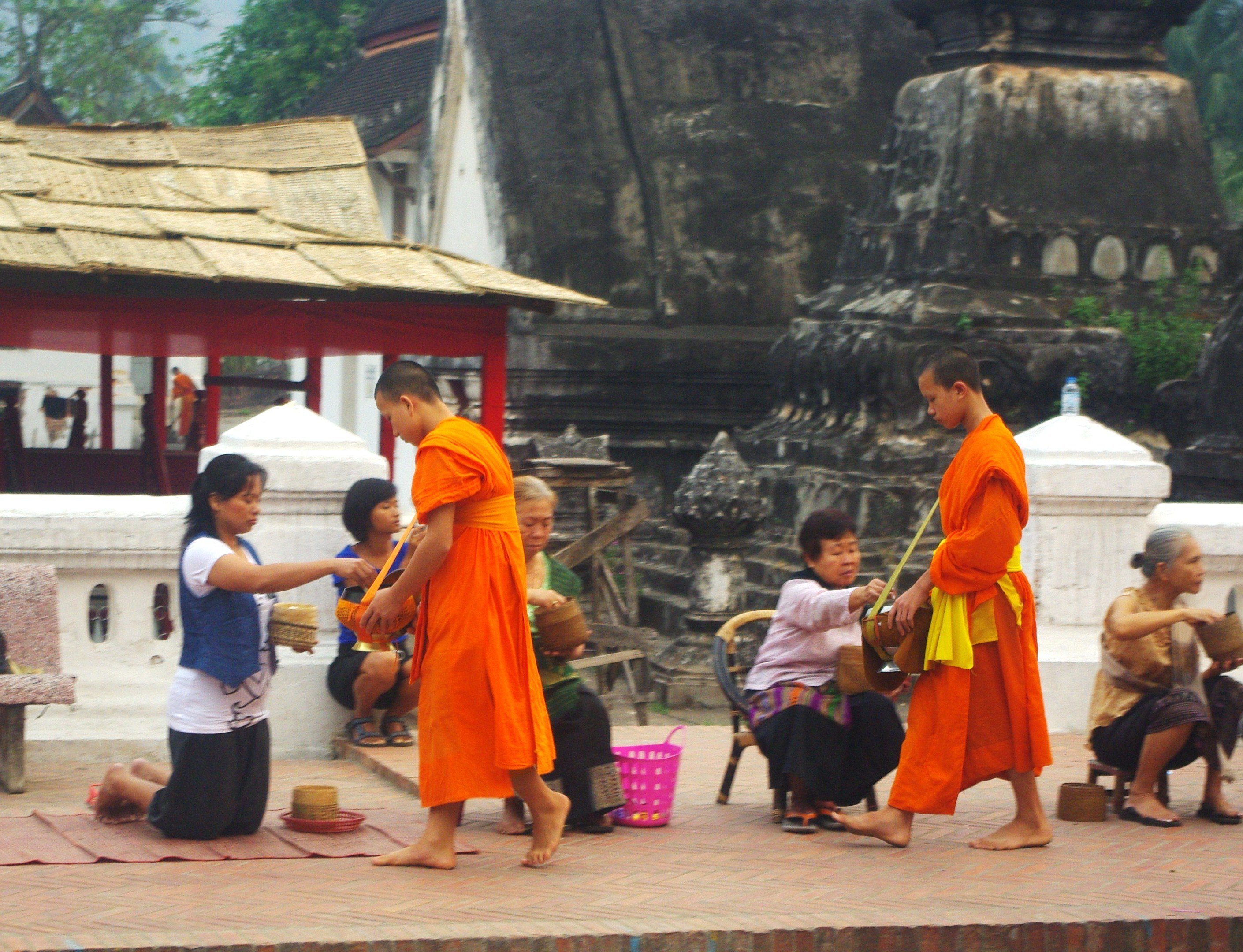 Taking advantage of the cooler temperatures of early morning, we headed up Phousi Hill, as soon as the monks departed.  Well known as a viewing platform for a Mekong Sunset, we opted for a morning ascent as the air was very smokey, and the sunset would not be that wonderful.  In tourist season many people congregate on the Phousi summit every afternoon to photograph the sunset. 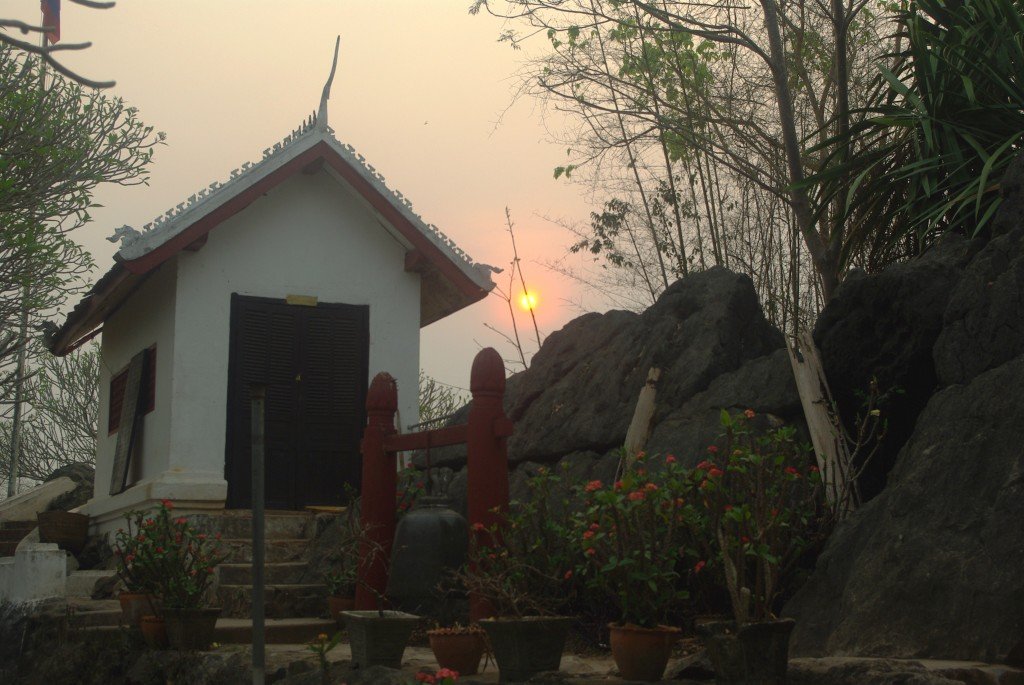 I was happy that we were up there by ourselves to greet the sun as it’s strange light shone through the haze. 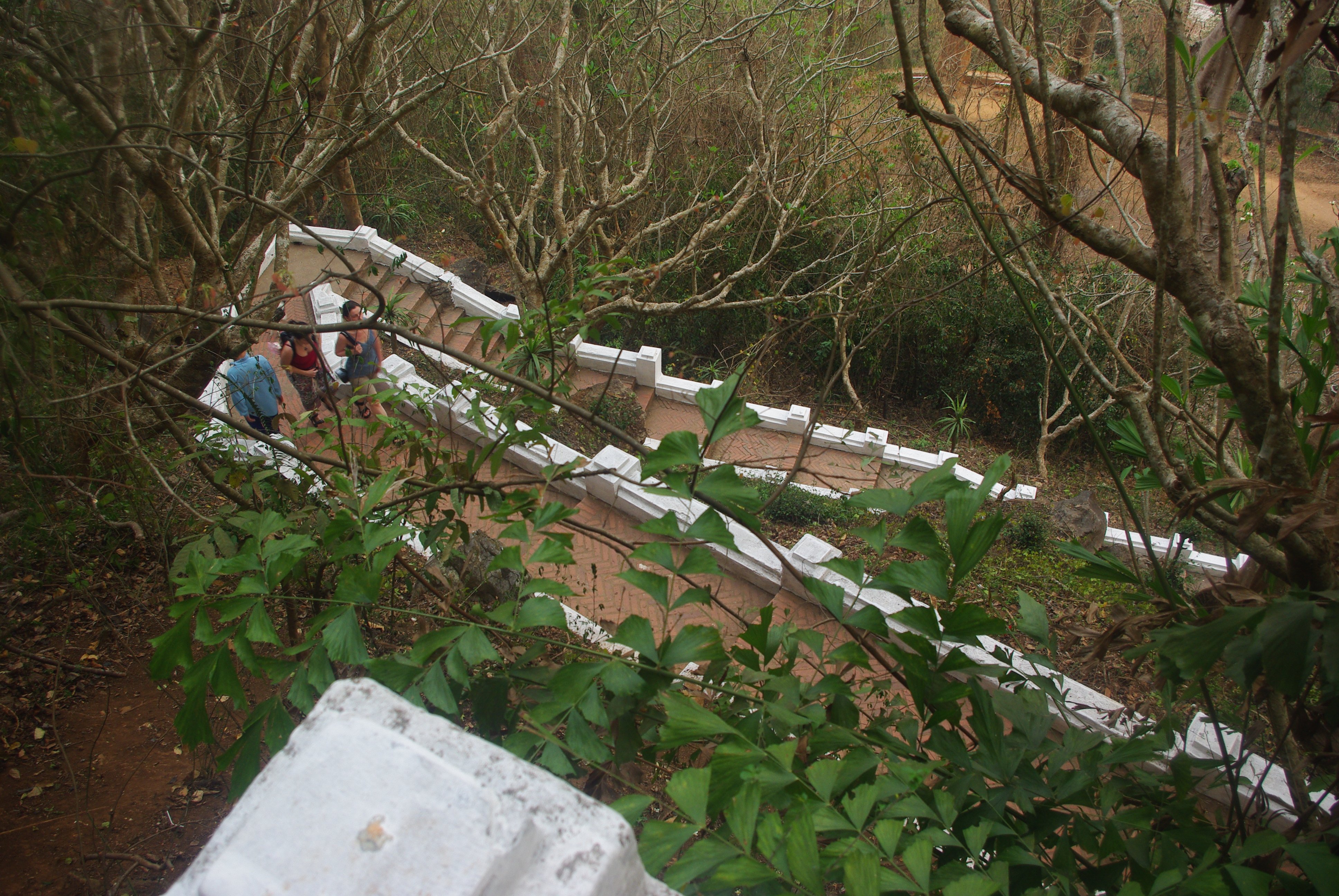 Phousi, as it is affectionately known, is smack bang in the middle of the old town and has a zig zaggy white topped staircase that leads up from Th Sisavangvong on the Mekong side of the hill. 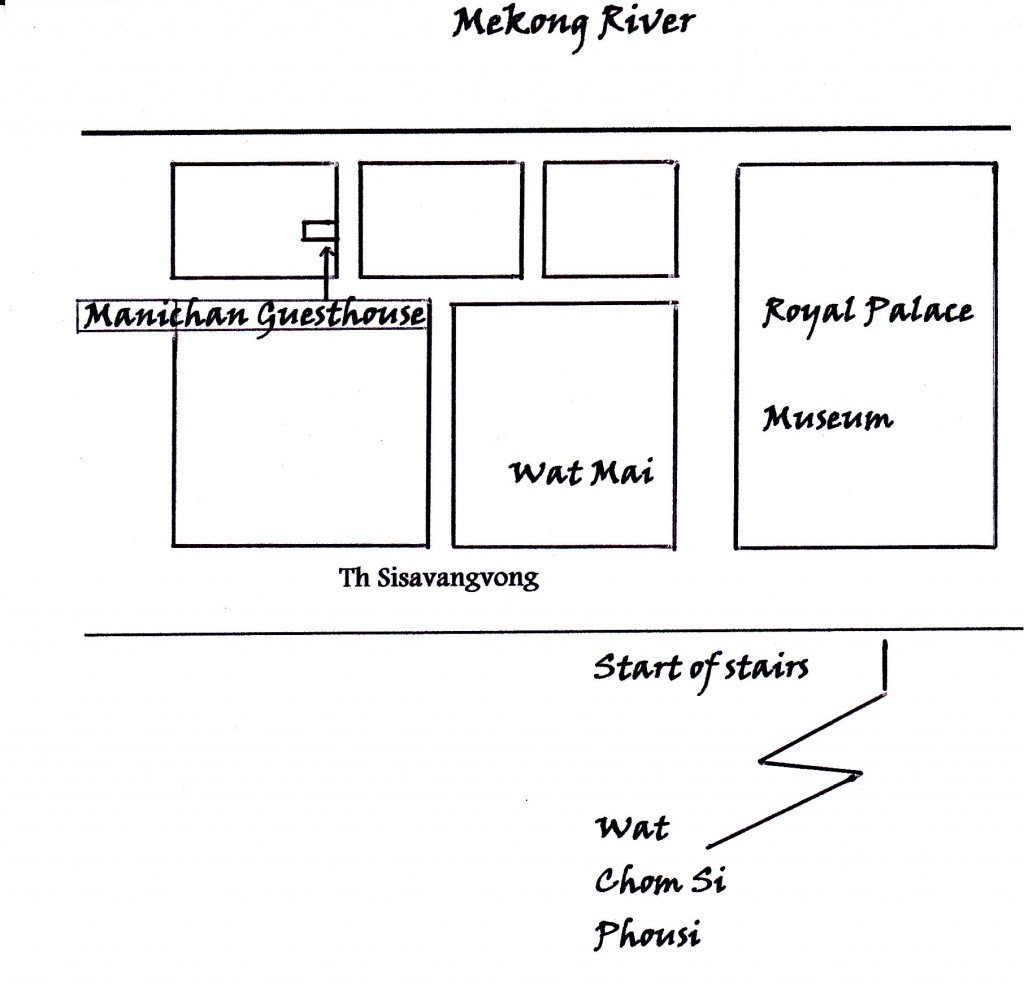 The glittering gold spires on Wat Chom Si at the summit can be seen from all over town. 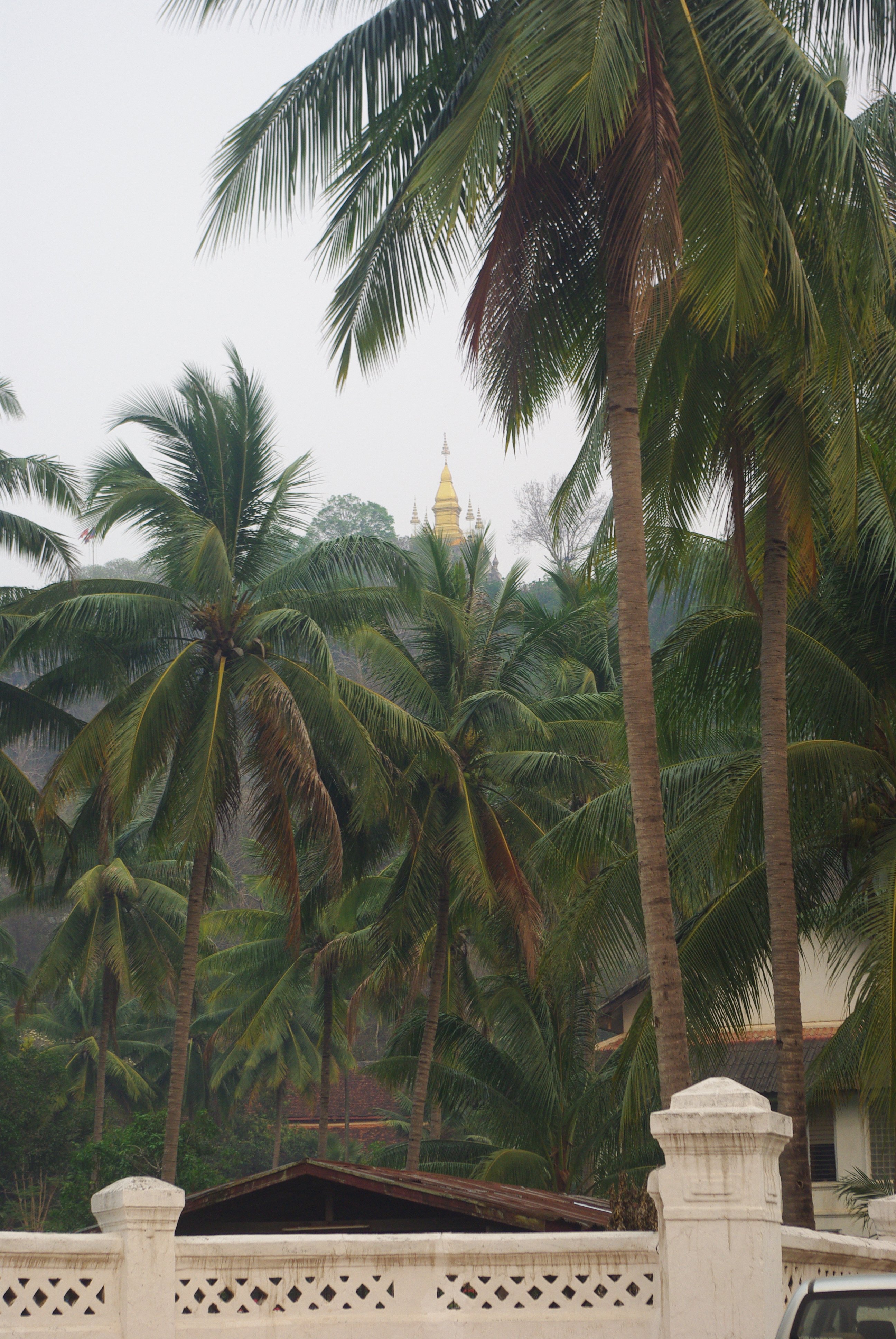 Novice monks, climbed all over the Stupa, lighting candles as directed by a group of white clad women, who when happy with the positioning of the candles sat in a row in front of the stupa  to pray. 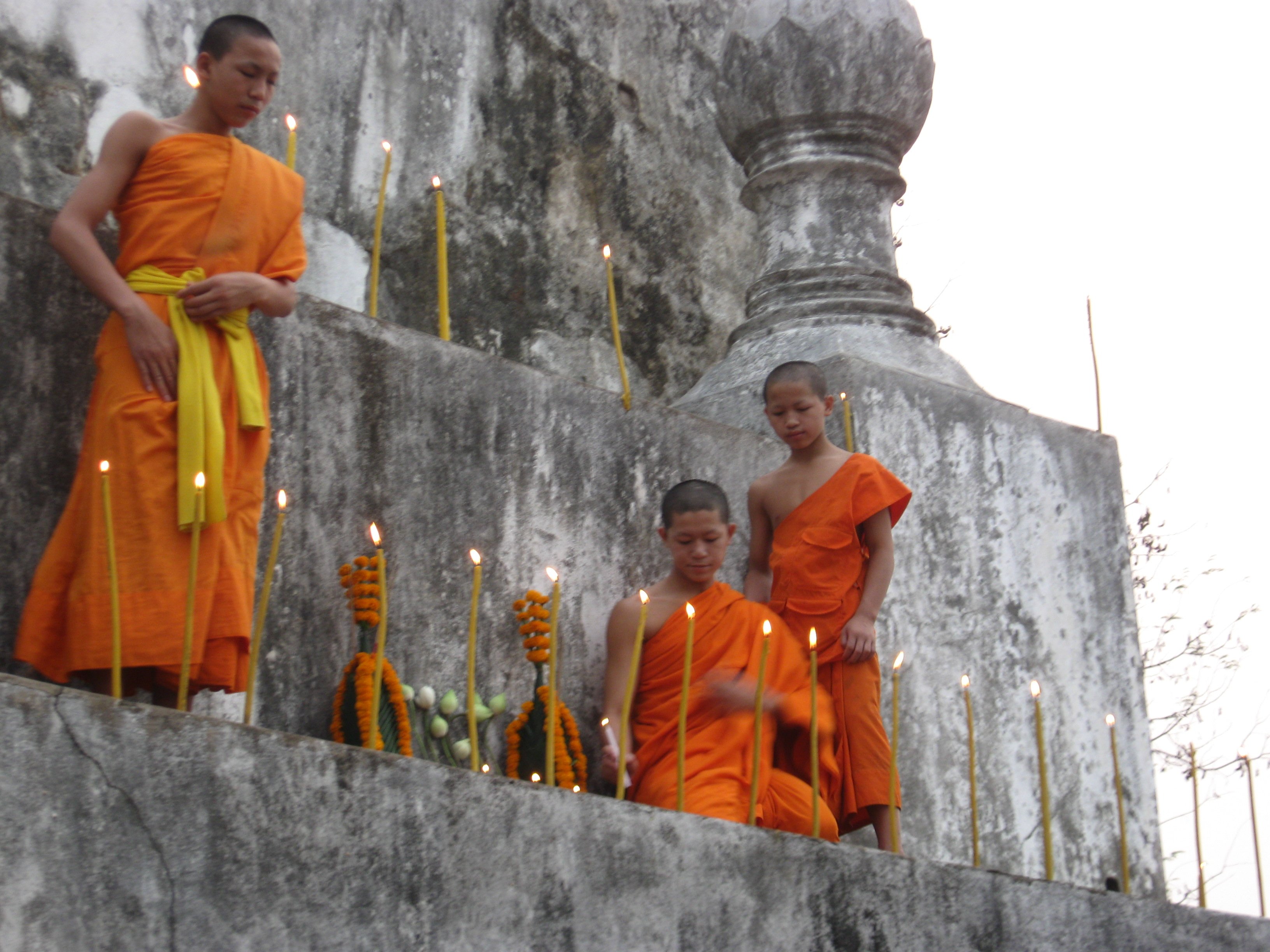 After discreetly watching the women praying, I placed an offering at the base of the Stupa, 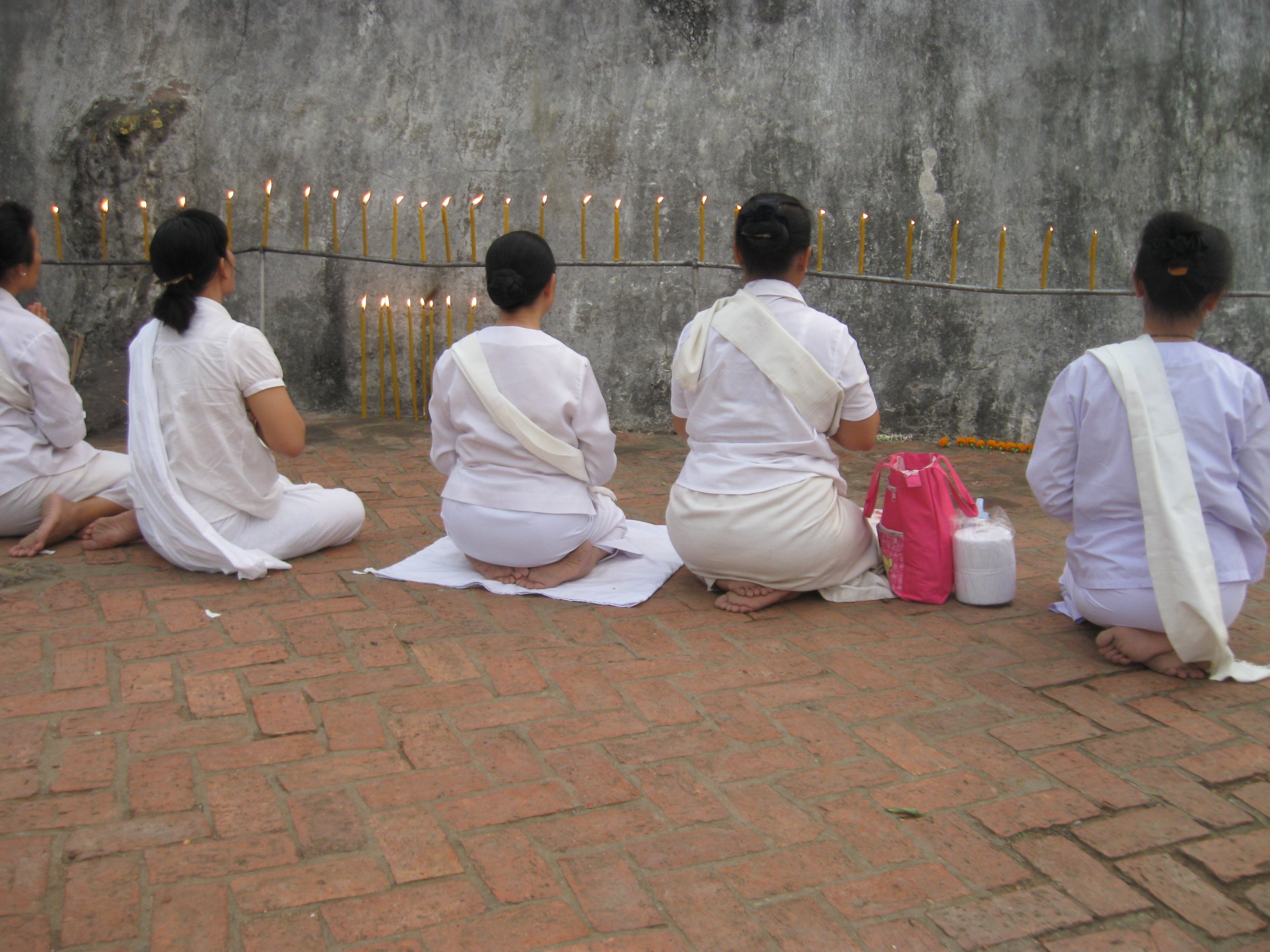 and we headed off on a meandering walk atop the hill, with only a handsome street dog for company. 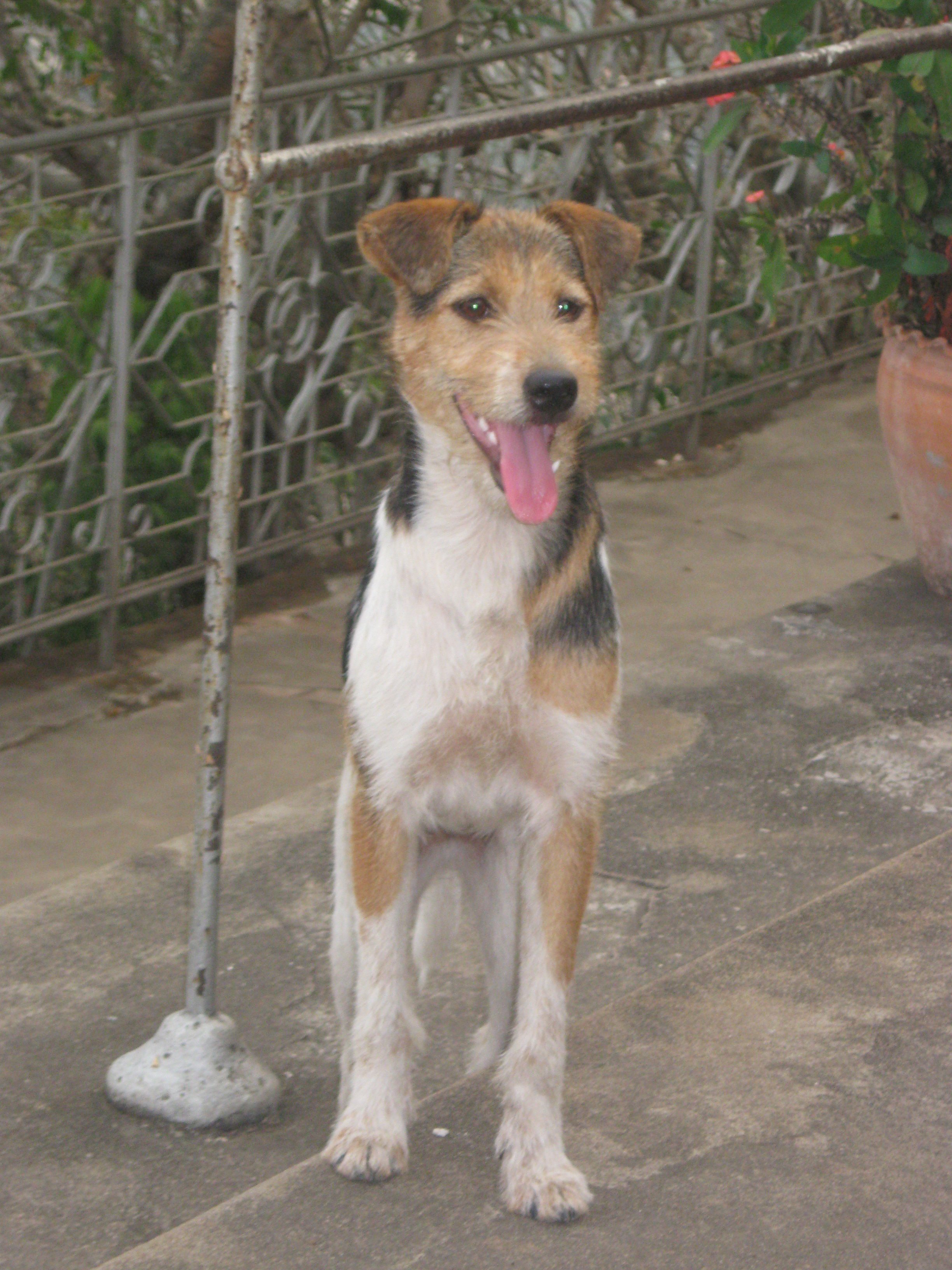 The path took us past the remains of an old Russian machine gun mounting, 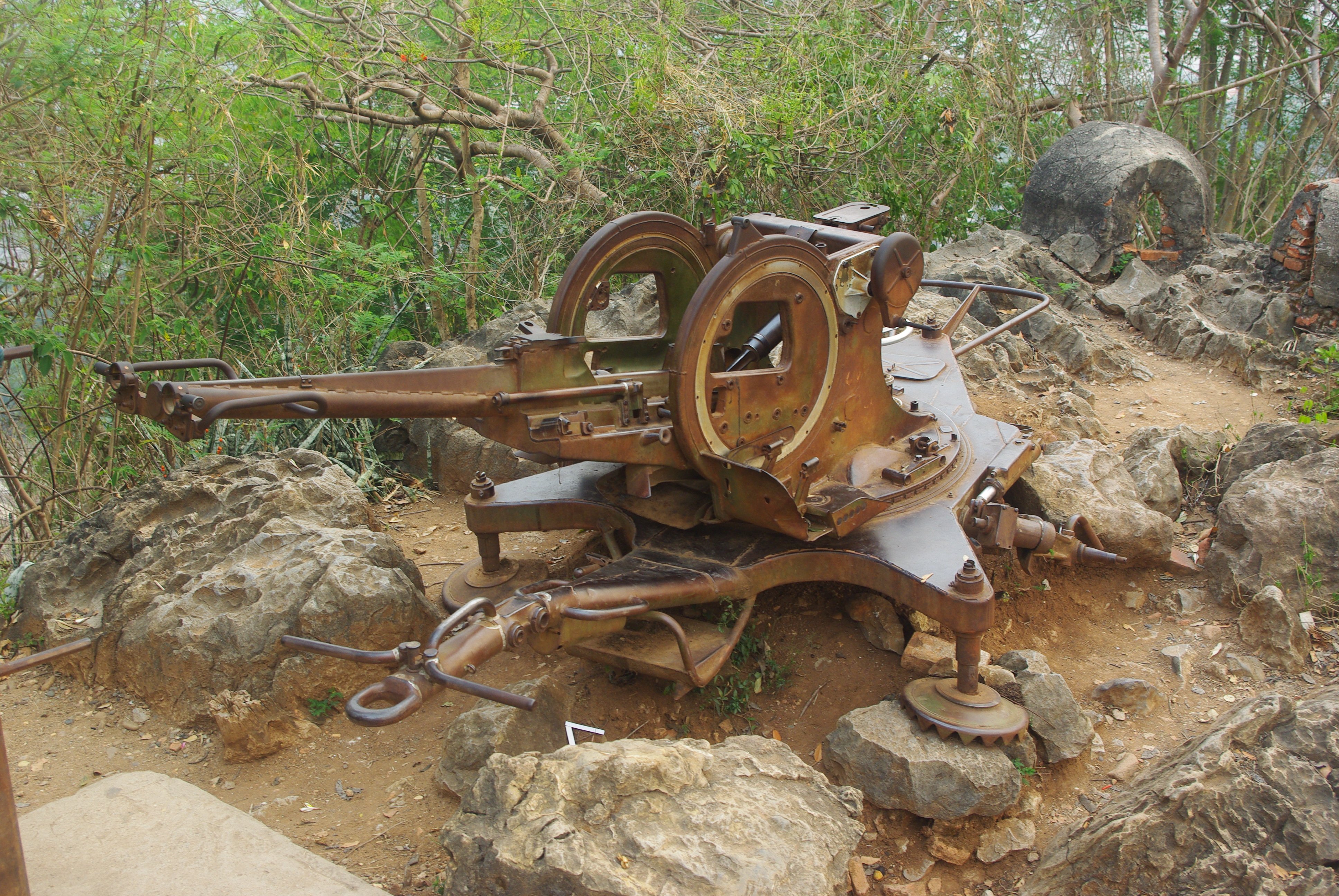 and a  (genuine) buddha footstep, now accentuated with gold paint, 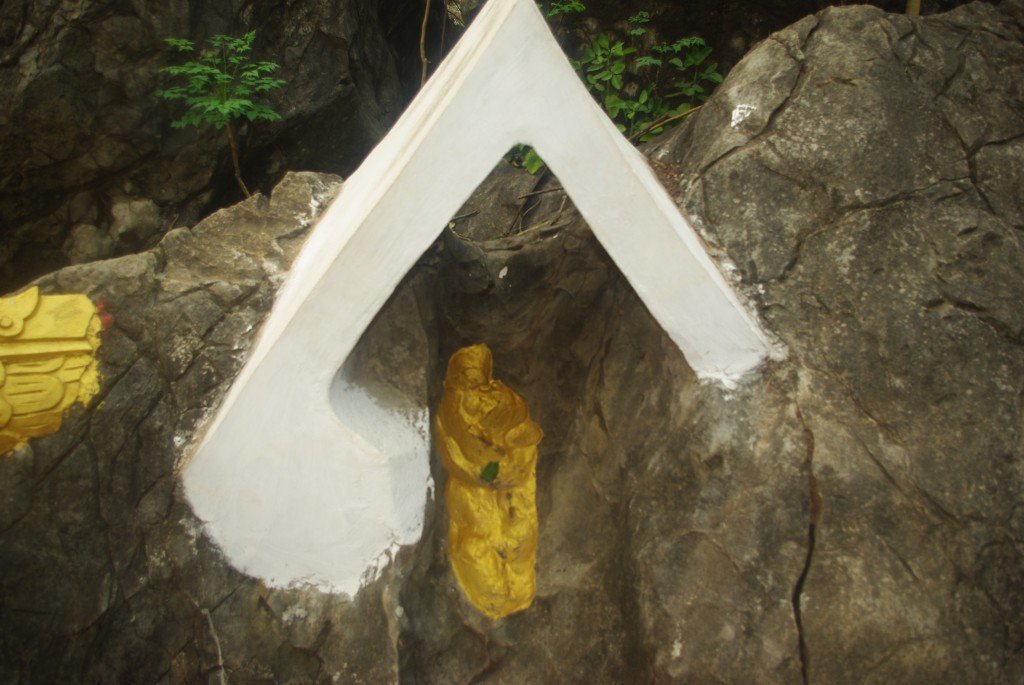 after which a golden naga staircase led the way – 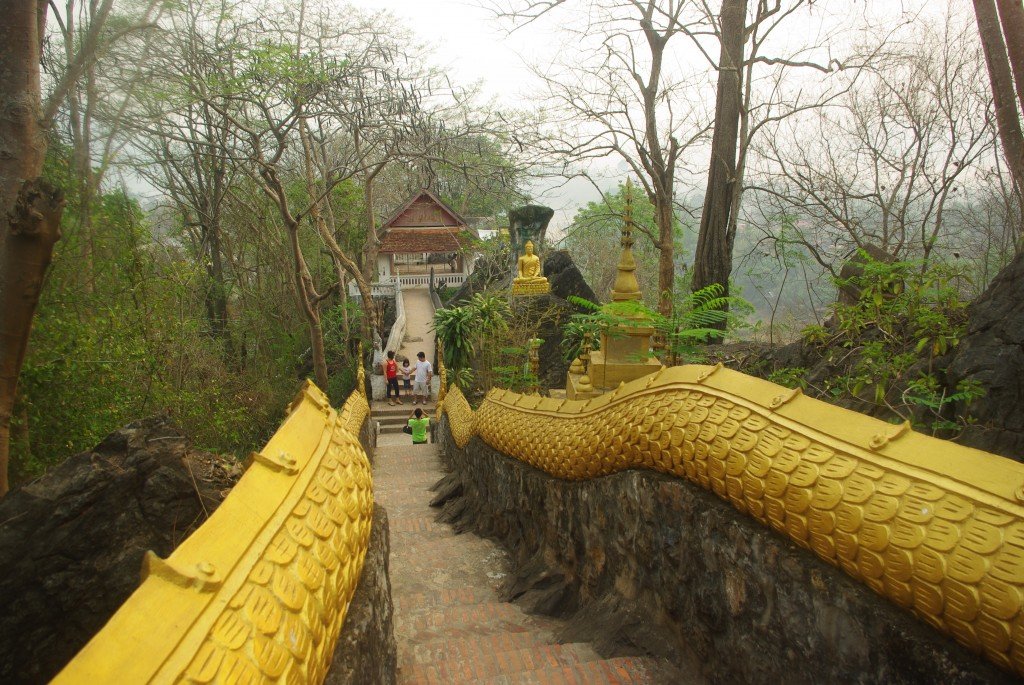 past a series of golden Buddhas – One for every day of the week, plus more! 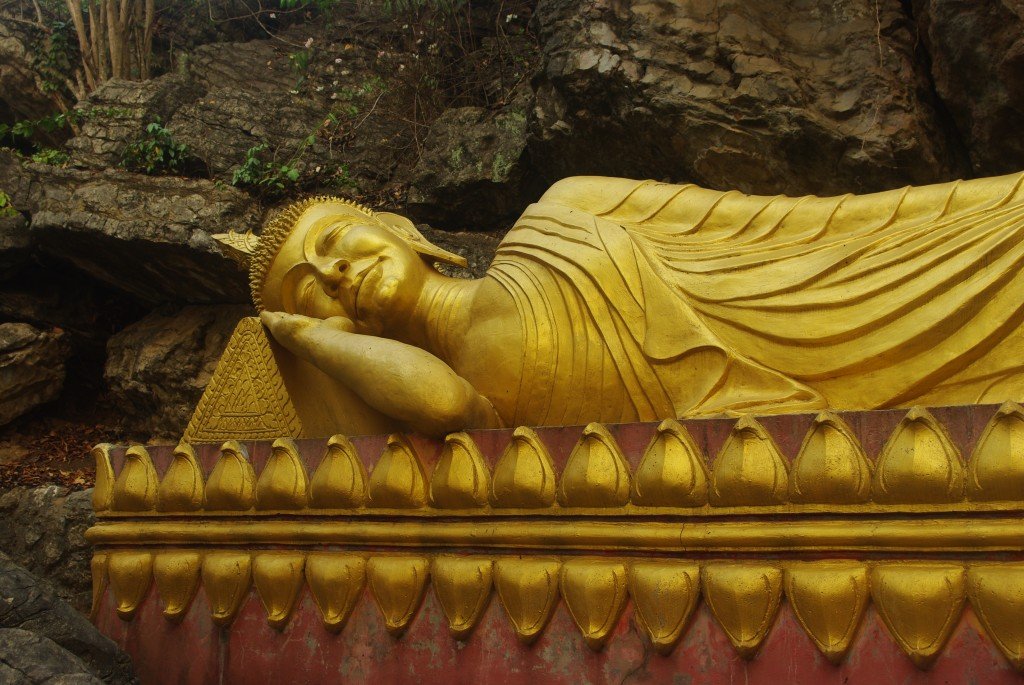 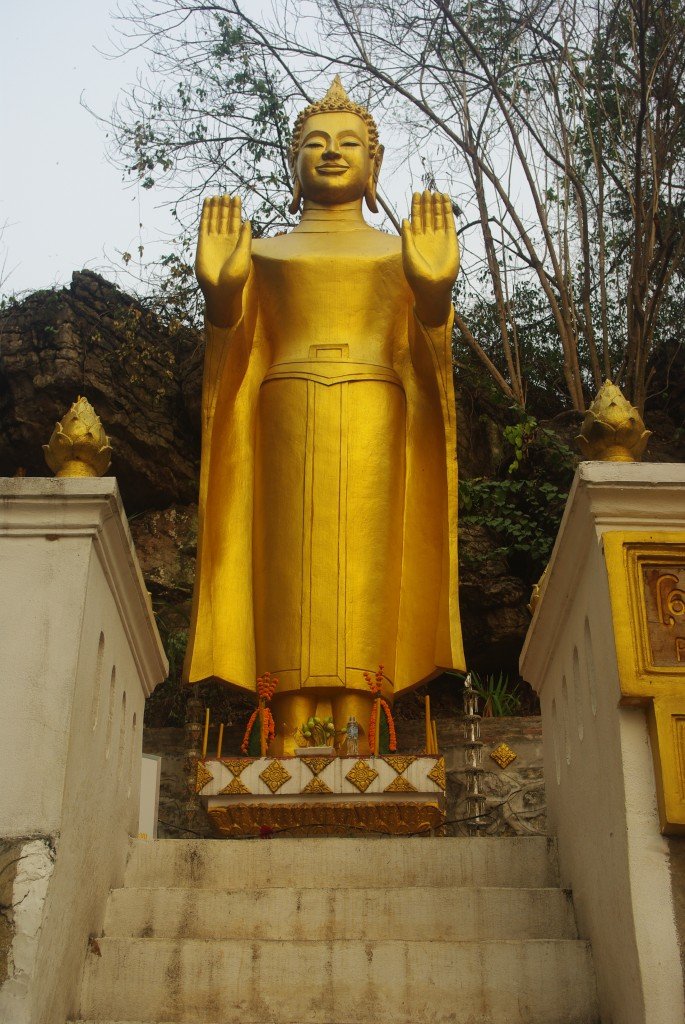 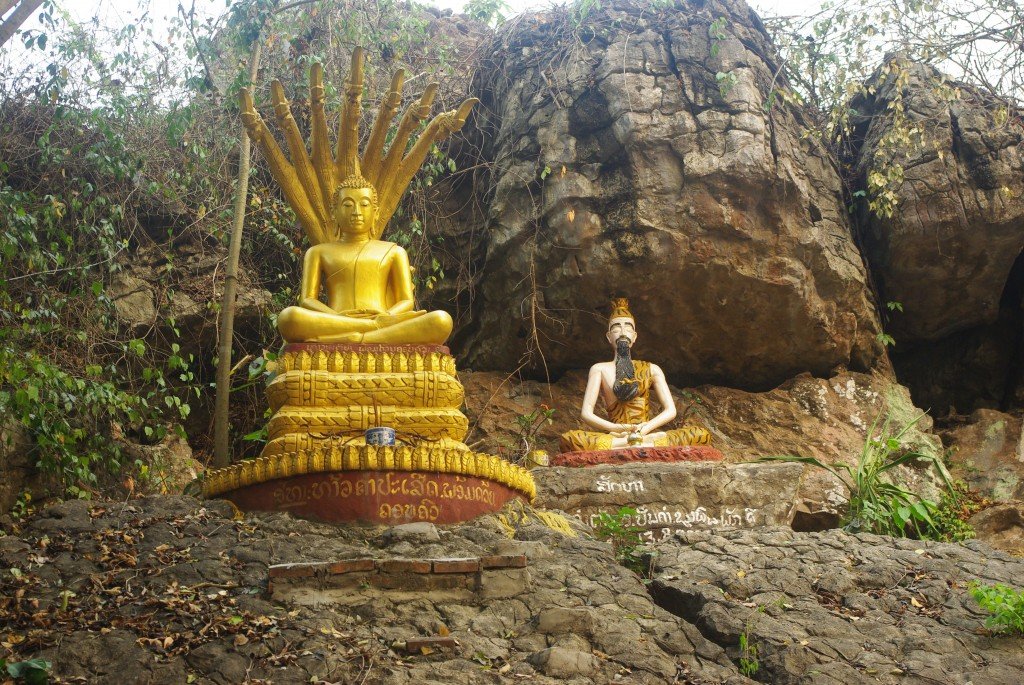 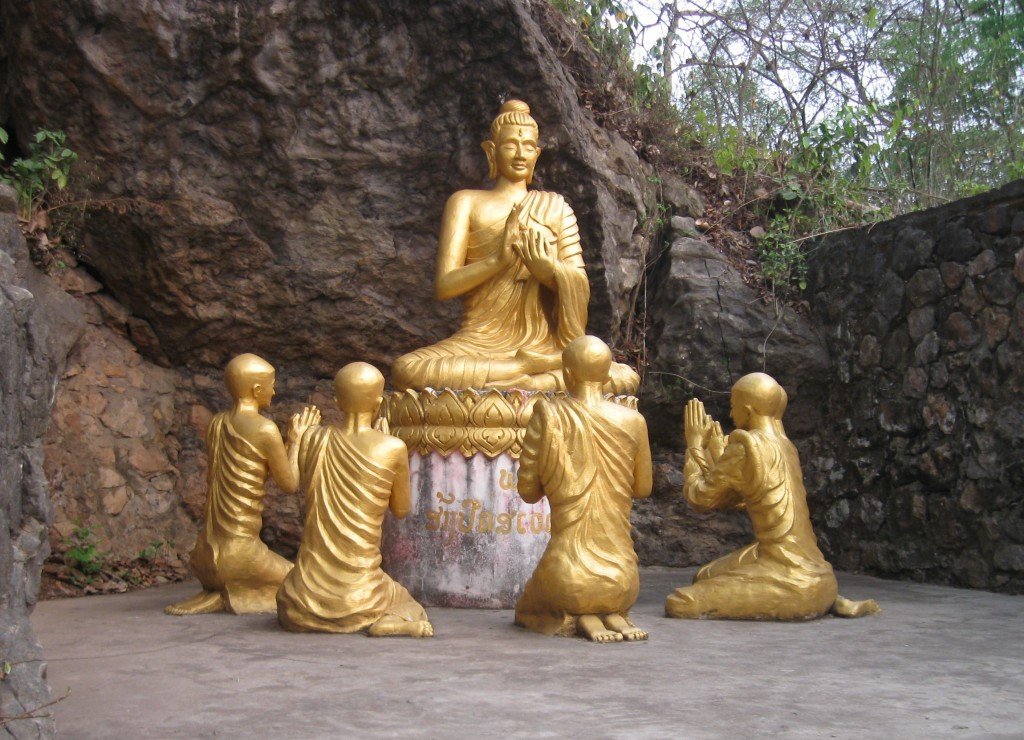 Continuing on and down,  the track deposited us on Phousi Road on the Nam Kahn side of the hill,  and we hot-tailed it back to the Guesthouse for one last scrumptious breakfast.   We spared a thought for the monks who would have, at the same time, been tucking into their steamed rice offerings.

CHRISTMAS IS FOR REMINISCING
Next Post: WE WANT TO HOUSE-SIT AGAIN!