As soon as I read about the Piazza Navona fountains in Rome, I knew they would be at the top of our Rome Walking Itinerary. With the Trevi Fountain closed for repairs during our 10 weeks in Europe, you can imagine the excitement of discovering Navona Square was home to not one, but three famous fountains.

If you have not been to Rome before we suggest you prepare a Rome Itinerary. 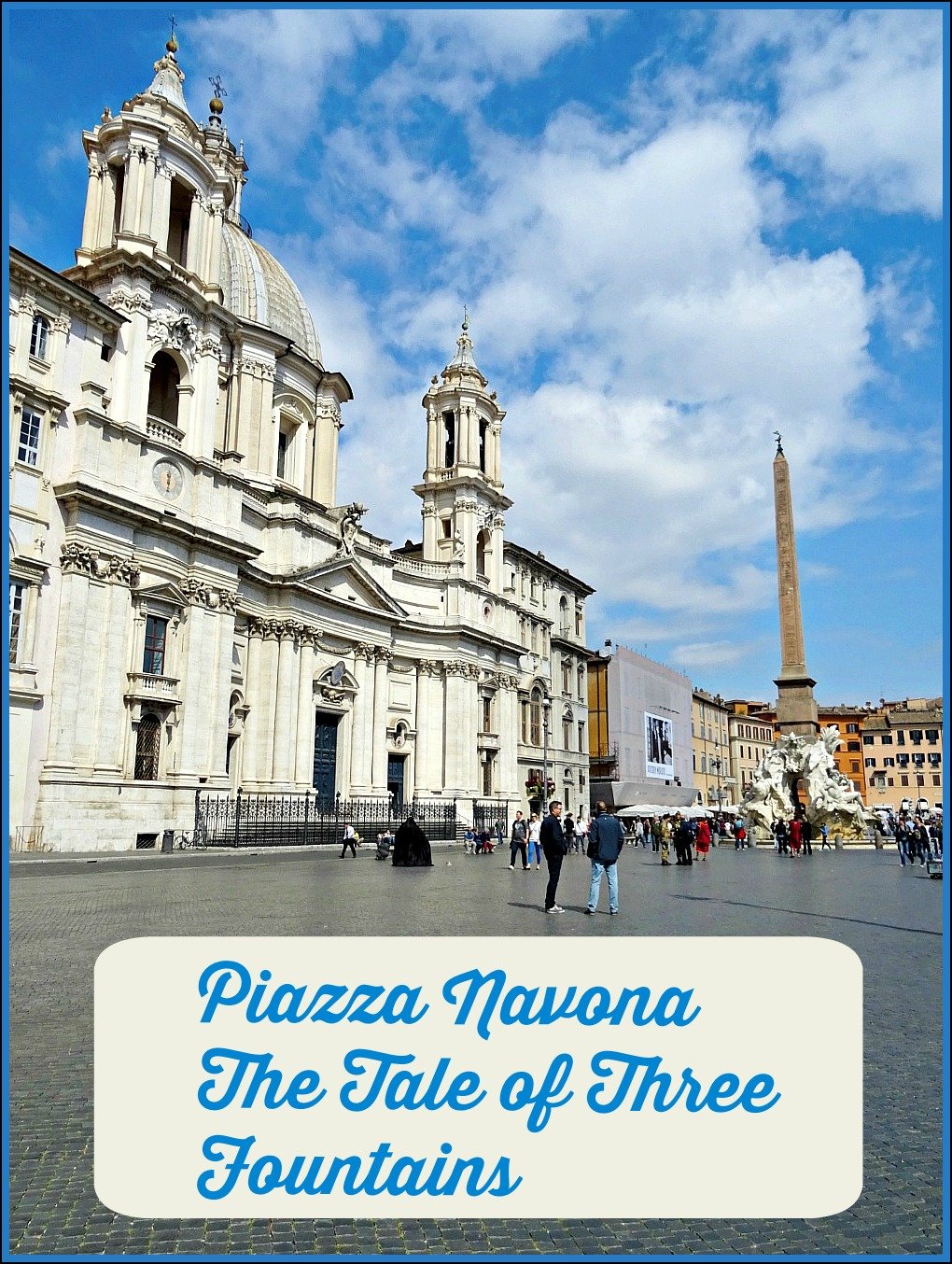 When to Visit Piazza Navona Rome

The balmy weather and fewer crowds of Early Spring make it the perfect time to visit Piazza Navona fountains and explore Rome on foot generally. We have been to Rome several times, the last two visits being in Spring. If Spring doesn’t work for you read more about the best time to visit Rome.

Stay in Trastevere and walk to Piazza Navona Fountains

It was no accident that our Airbnb room was in the atmospheric neighbourhood of Trastevere. Trastevere is a fantastic place to stay in the eternal city, especially when exploring Rome on foot.

Trastevere means “Beyond the Tiber” and is situated on the west bank of the river in the 13th rione of Rome. Trastevere is south of the home of the Pope at Vatican City.

This is a great starting point for a walk to the three fountains in Piazza Navona square.

Five minutes after devouring a cup of fruit at Campo di Fiori, we were arriving at the southern entrance to Piazza Navona.

You wouldn’t imagine, without prior knowledge, that Piazza Navona is built above the Stadium of Domitian (80 AD) in the 15th Century.

Modern day Piazza Navona sits neatly over the stadium’s interior arena, an area larger than that of the Coliseum’s (arena), while the original arcades sit beneath the buildings that line the square today.

The Fountain acquired it’s name when 18th Century locals decided the face of the muscle-bound fish-grappling Triton in the centre of the fountain had Moorish features.

Back in 1575 the fountain’s statues were of a Dolphin and four lesser Tritons, with Bernini’s imposing central Triton being added in 1653.

In 1874 the original statues were placed in the Galleria Borghese, meaning the copies on display today are a whopping 142 years old! 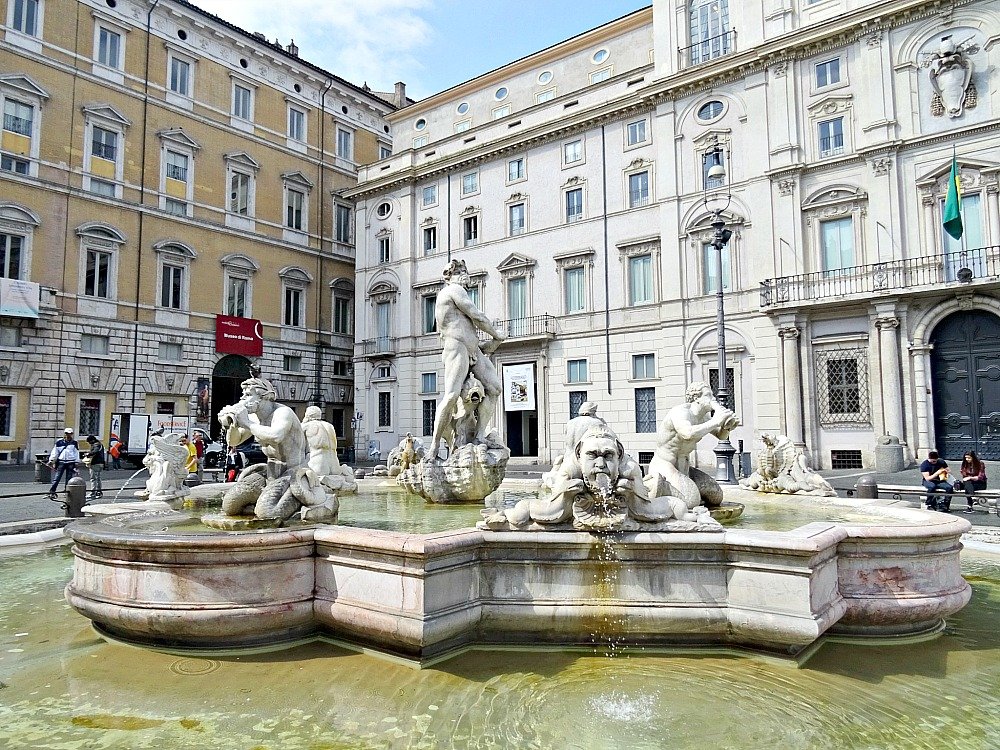 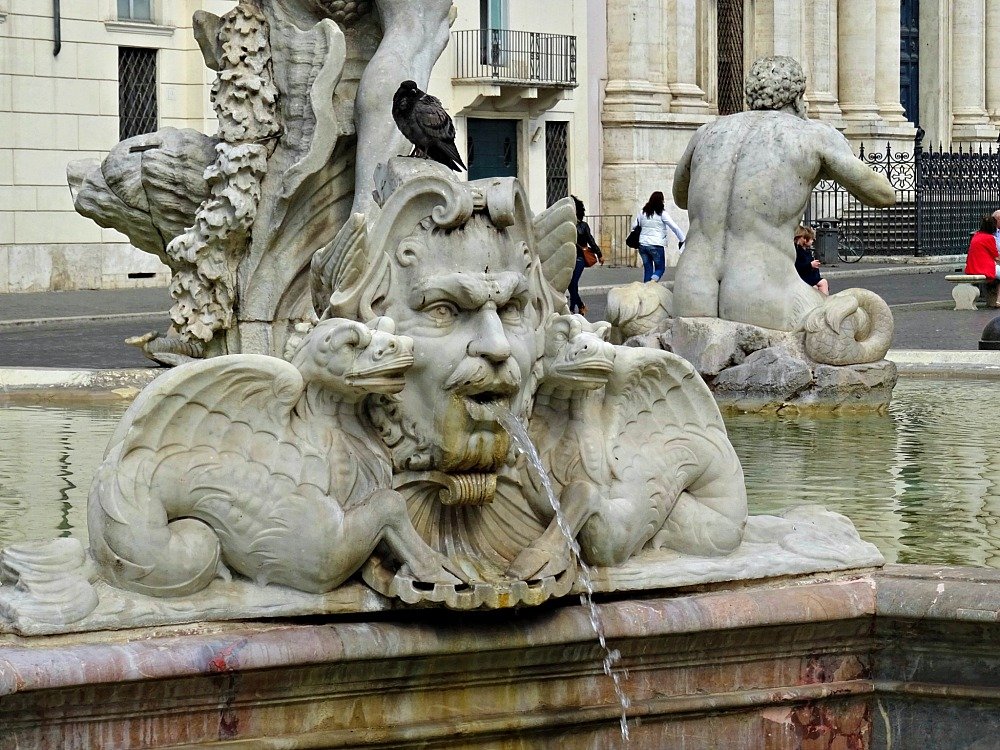 Strolling northward the Piazza reveals an array of Al Fresco dining options on the right. 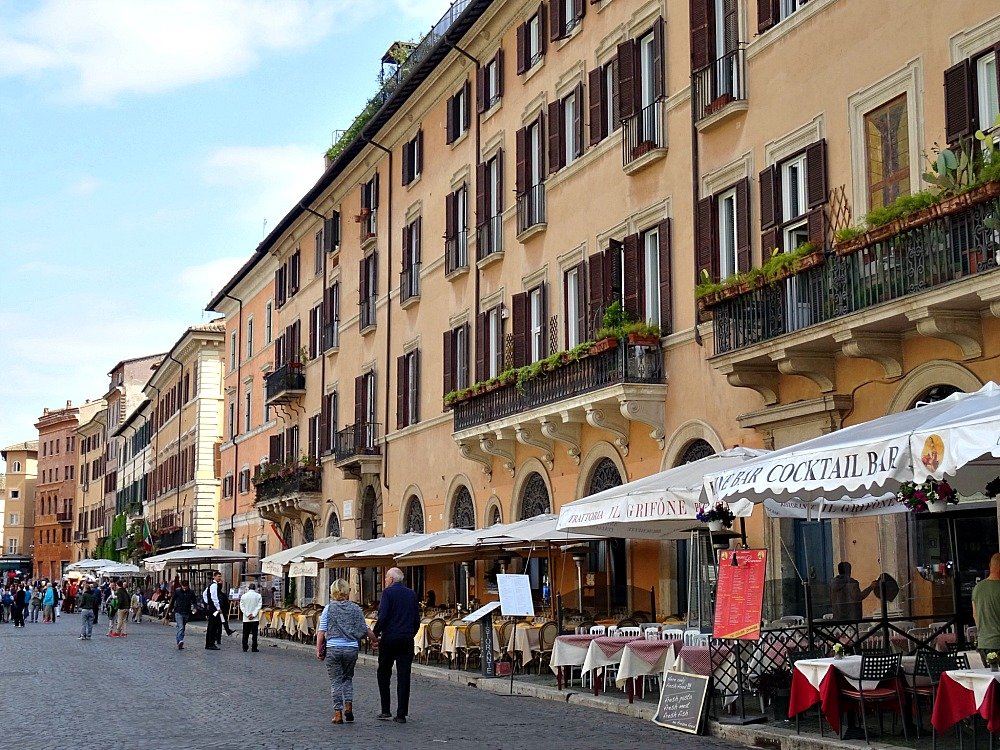 This is probably the most beloved of Bernini’s fountains in Rome.

The Fountain of the Four Rivers, or Fontana dei Quattro Fiumi, resides outside the Sant’Agnese Church, mid way in the Piazza. The fountain’s statues are of the four river gods from the continents of Papal authority. Namely the Nile in Africa, the Danube in Europe, the Ganges in Asia and the Río de la Plata from the Americas. This could explain that puzzling palm tree.

The River God Ganges on the left, holds an oar to represent the navigability of his river, while on the right, the Nile God’s head is covered with material alluding to the fact that the source of the Nile back then was unknown or hidden. 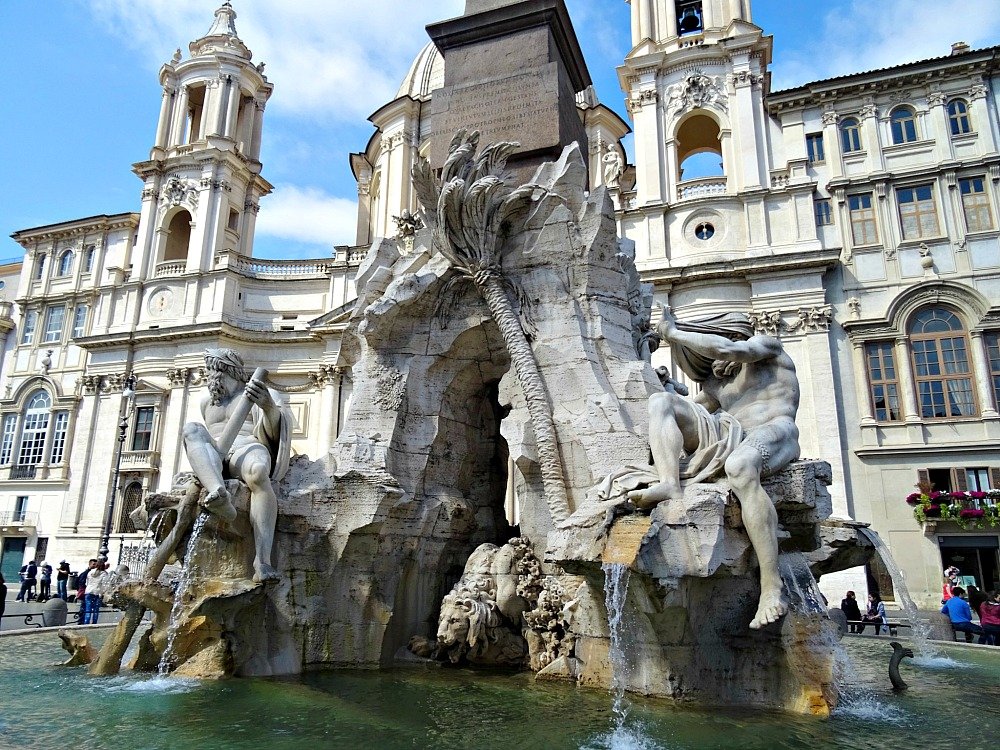 Opened in 1651, the fountain is distinguished by an Obelisk rising between the statues of the four gods. Rome has eight original Egyptian Obelisks and five built to order for the city. This particular one (16m or 54ft tall) was built to order for another project in AD81 and was seconded here in 1651. All the Obelisks, original or commissioned, were freighted down the Nile and across the Mediterranean in special Obelisk Ships. I would like to have seen that.

Built from the public purse during the drought of 1646-48, Romans of the day were not pleased with this latest extravagance. In the tradition of Pasquino, hand written papers were attached to the fountain proclaiming: 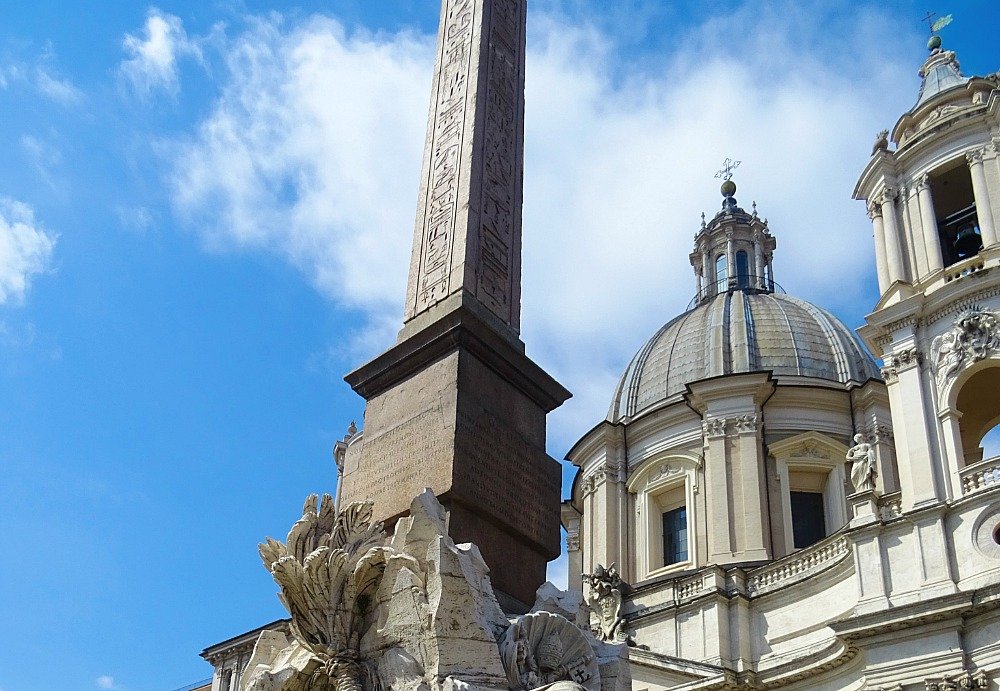 Fountain of Neptune Rome the most northern of Piazza Navona Fountains

Like the Fountain of the Moors at the southern end of the Piazza, Neptune’s fountain was designed by Giacomo della Porta (1574). The basin was finished in 1576 but it wasn’t for another 300 years that the fountain acquired statues to balance the look of the Piazza.

With public drinking and washing no longer a requirement, Rome as Capital of the newly formed state of Italy, was interested in a more decorative style. The piazza now had three impressive fountains worthy of the Capital.

The statues depict Neptune fighting an octopus with an audience of sea nymphs, cupids and walruses. 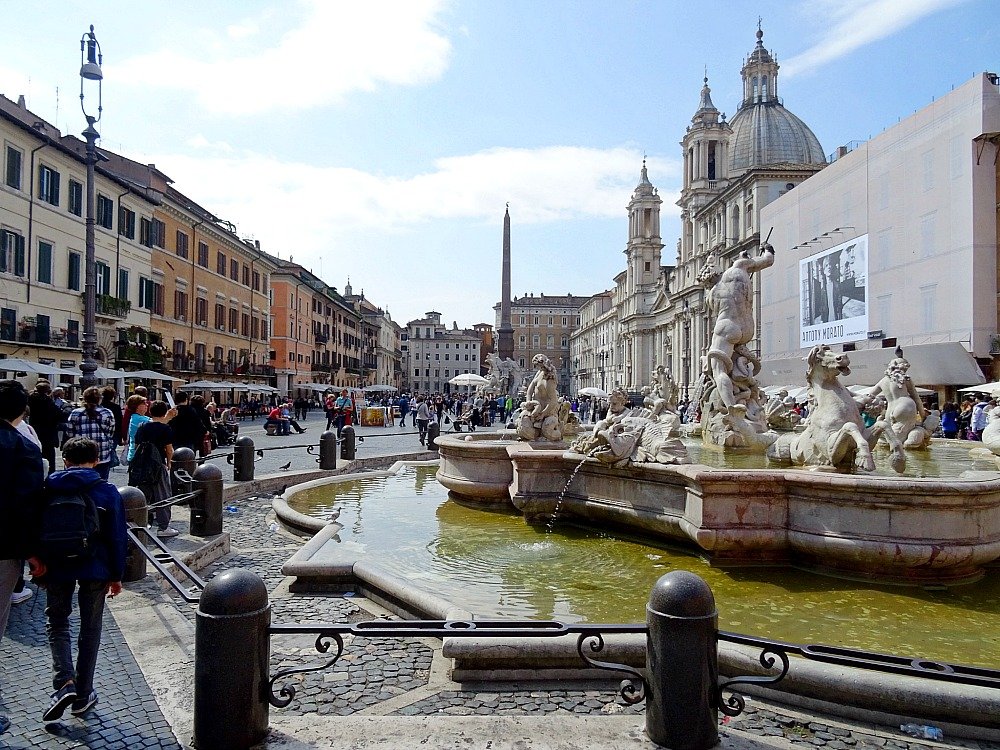 Water for the Three Fountains in Piazza Navona

The three fountains of Piazza Navona, together with the Trevi Fountain, were once solely fed from the Aqueduct of the Virgin, but modern day Rome recycles water and sometimes mixes water from the different aqueducts to ensure a continual water supply.

The church, shown behind the fountain and Obelisk in the photo below, was constructed in 1652 on the site where St. Agnes was martyred in the then Stadium of Domitian. 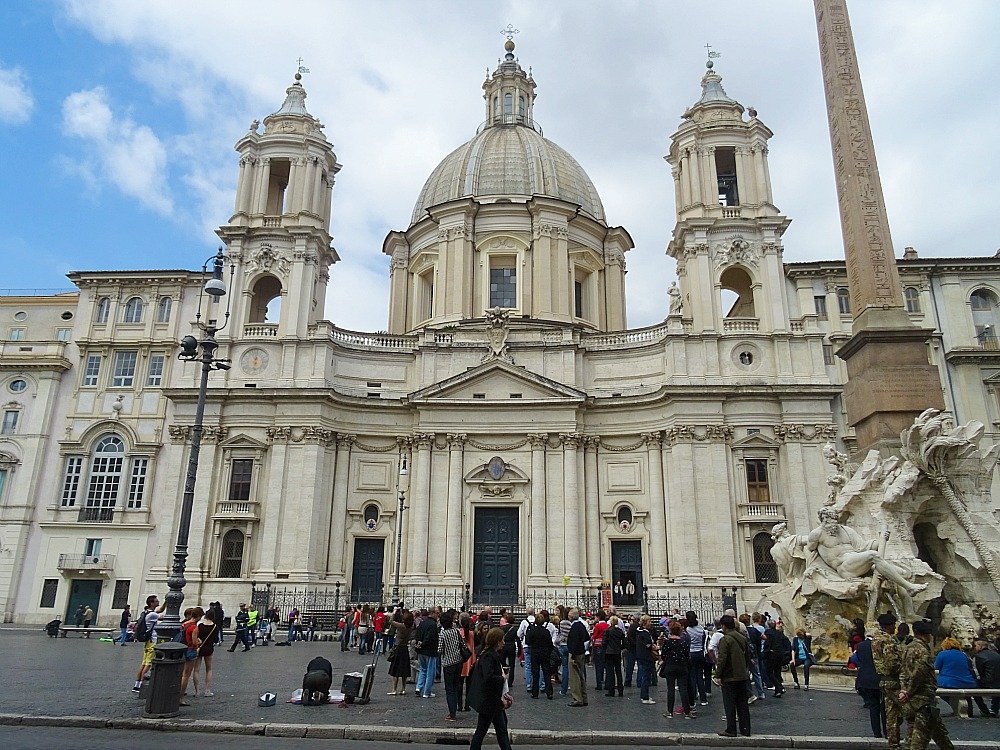 Where to drink and eat in Piazza Navona Rome

Vivi Bistrot at the entrance of Palazzo Braschi in the south-west corner of Palazzo Navona has excellent affordable coffee and a convenient restroom.

It’s entrance can be seen beneath the red sign in the Fountain of the Moor photo above. 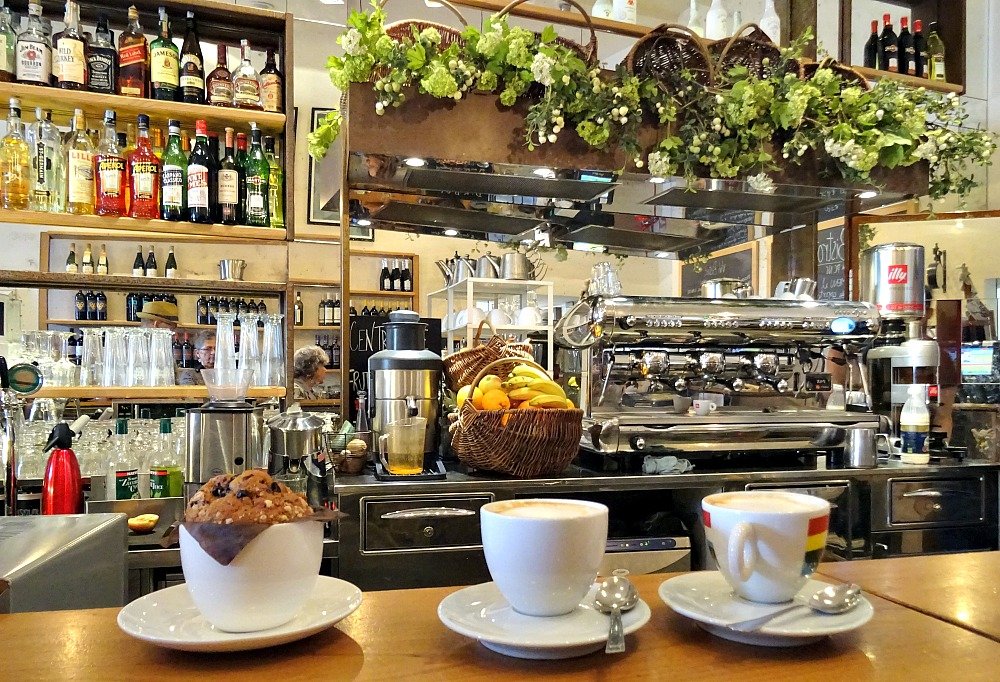 Piazza Navona is a budget travel attraction in Rome.

Three major fountains within one piazza.

Coolum a Beautiful Australian Beach
Next Post: Mullumbimby or Mullum a Little Town with Big Spirit