Many cities claim to be built on seven hills, not the least of which is the exotic spice laden city of Istanbul, Turkey.

A city that encompasses seven hills is sure to be dripping with views, but Istanbul has many man made viewpoints as well.

The Best View in Istanbul. 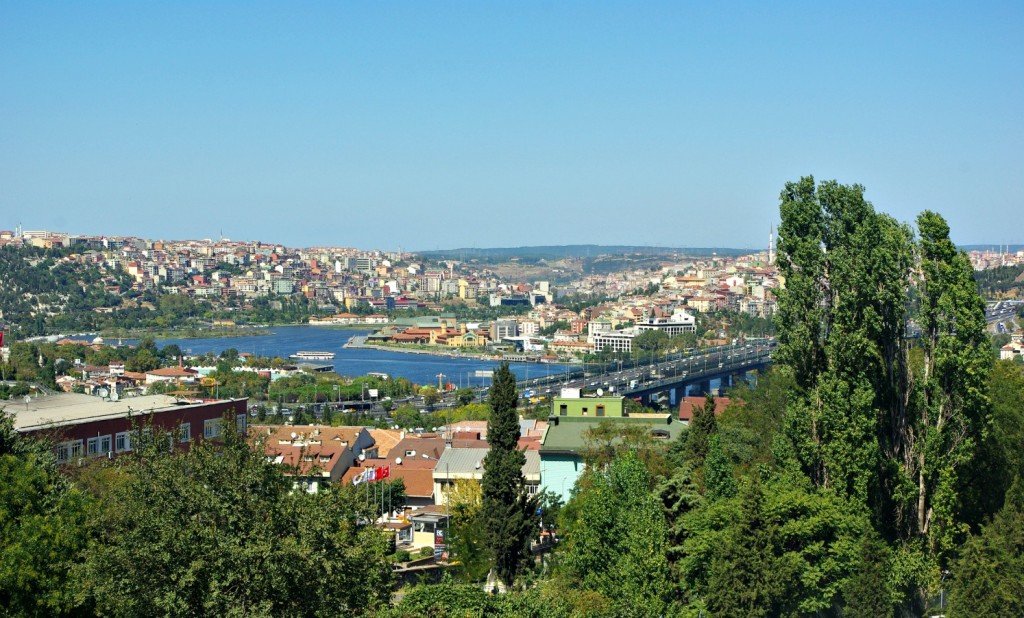 The view from the top of the 5.7km protective wall, built in the fifth Century by Theodosius II impressed me more than any other view in Istanbul.

I know that you are thinking I must be mad to choose just one, but read on and find out why I did.

At first while trudging up the hellishly hot streets behind the Chora Church (Kariye Museum) in the Fatih District, I wondered if we would even succeed in finding the damn wall, but then we took a right turn and nearly ran into it.  How could we ever have missed it? 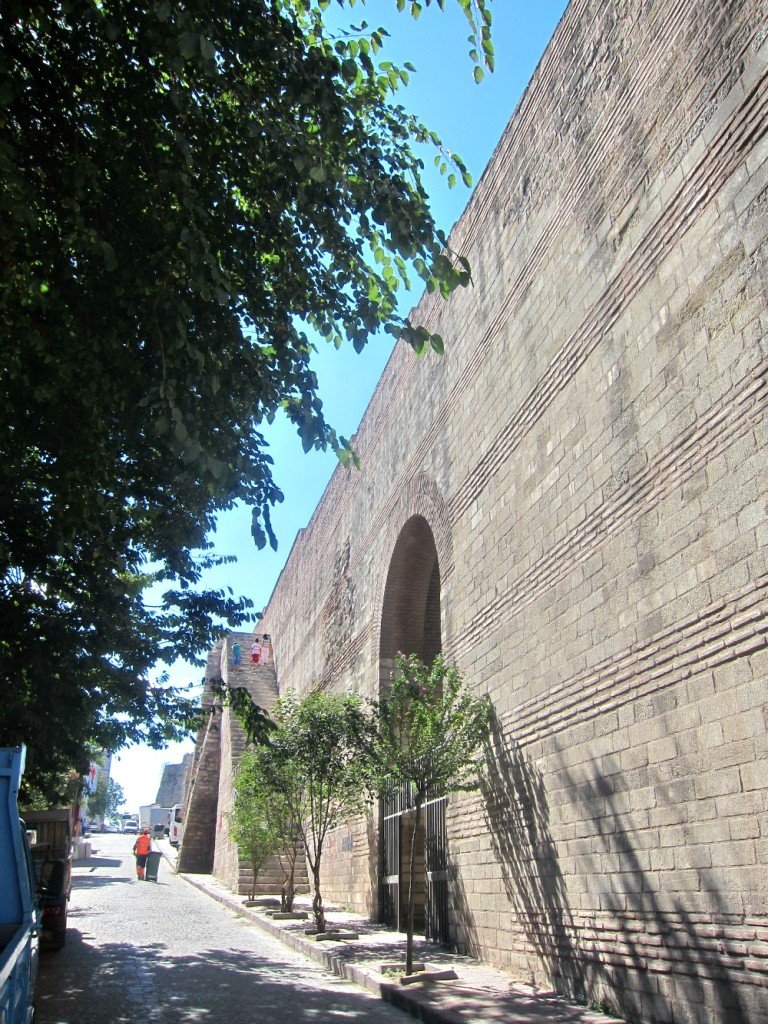 My eyes were immediately drawn to the steep stairs.   Vertiginous thoughts raised their ugly heads.  There were no handrails.  But hey – the stairs were wide – I could do it.

Theodosius II must have had tiny feet. My average sized feet left no room for error on those midget steps.  I thought of  my Grandmother’s goats.  I could use some of that cloven hooved traction!

At the top (think Everest) I made my way to a raised central section of wall where some teenagers sat talking, thankfully oblivious to my sweaty palms and racing pulse.

As I turned to join them on their perch, the wind and the view grabbed me simultaneously.  An involuntary “W.O.W.” burst from my mouth, which in turn started the group giggling and mimicking – but I could tell they were pleased at my reaction.   The ice having been successfully broken, the boys started showing off while the girls and I rolled our eyes and giggled – some things are the same wherever you are in the world – and I like that.

Those minutes were filled with freedom. I had conquered my fears. There were no physical barriers and the chrystal clear view spread lazily in every direction.

From my Byzantine seat, high above Fatih, I watched women hanging clothes on a rooftop terrace.  I had a birds eye view of the crumbling Ottoman houses we had walked by admiringly only minutes before.  The hills gave a sense of place and it was fun finding already visited locations, like Eyup on the Golden Horn inlet.  Satellite dishes perched nonchalantly atop ancient buildings, while the distant skyscrapers of Lavent seemed from some future time.  The Mihrimah Camii (mosque) built for Suleyman the Magnificent’s daughter in 1565, sat regally on the sixth hill of Istanbul on my right, guarding a distant view of the Sea of Marmara and its islands.

The Best View in Istanbul! 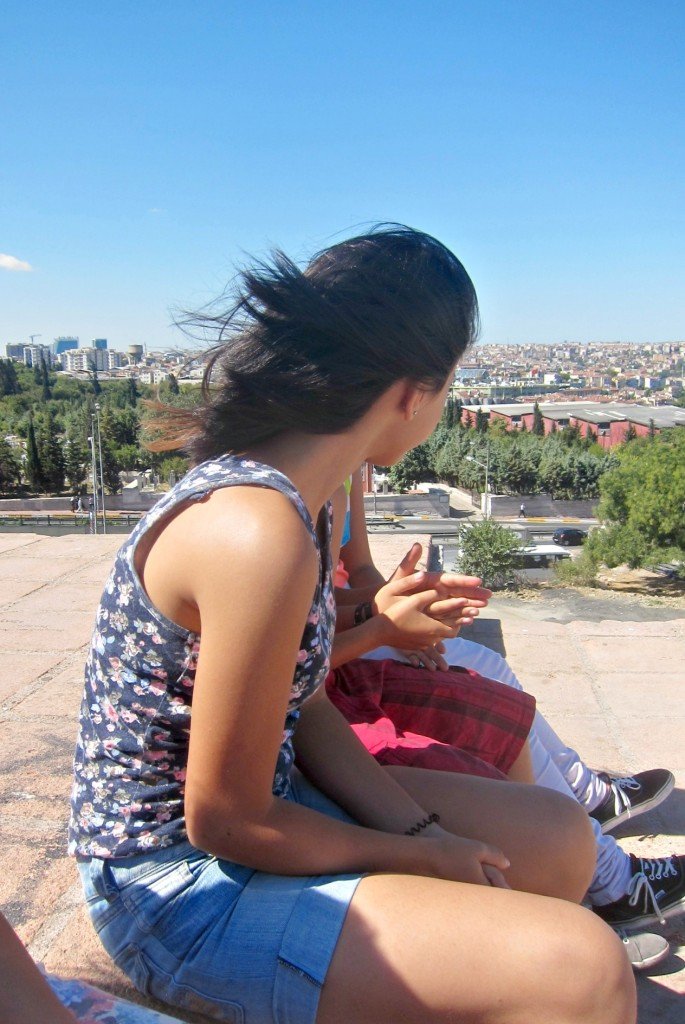 How long was I there?  Maybe 20 minutes max?  I drank it in – taking photos of the kids and of the view, laughing as the wind buffeted me, sitting glued roller-coaster-like to my seat – a roller coaster I could have ridden indefinitely.  Even now some three months later I remember with clarity the wildness of the wind, the exhilleration of the climb and the jaw-dropping views and I find myself smiling.

Views from the Top 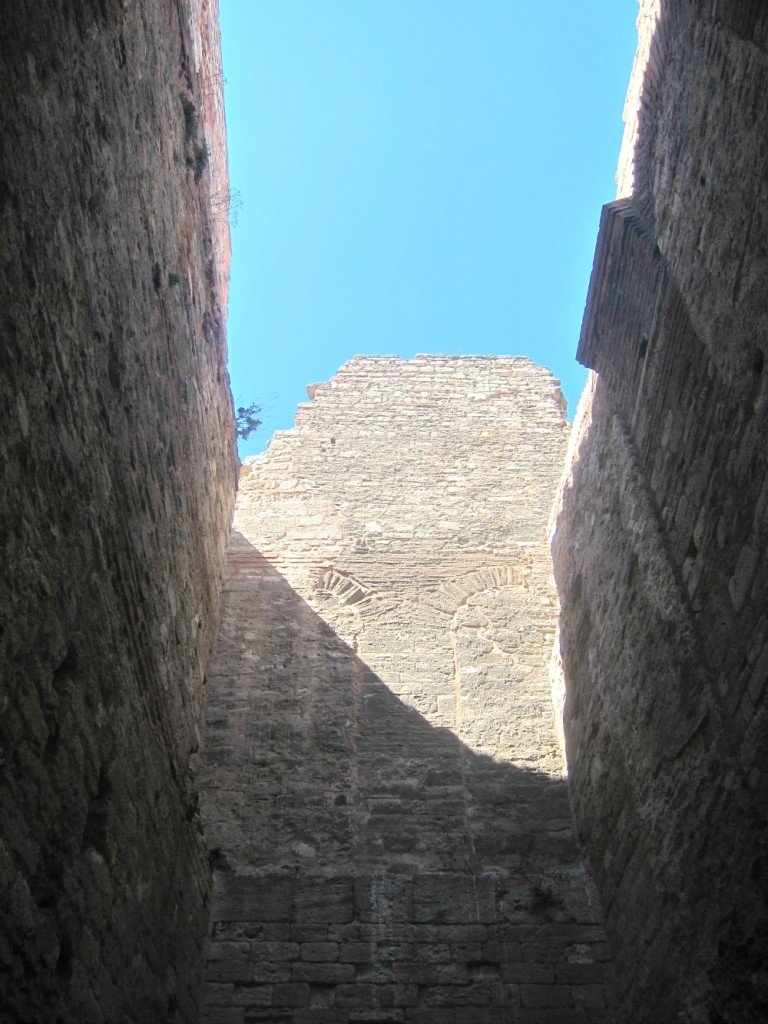 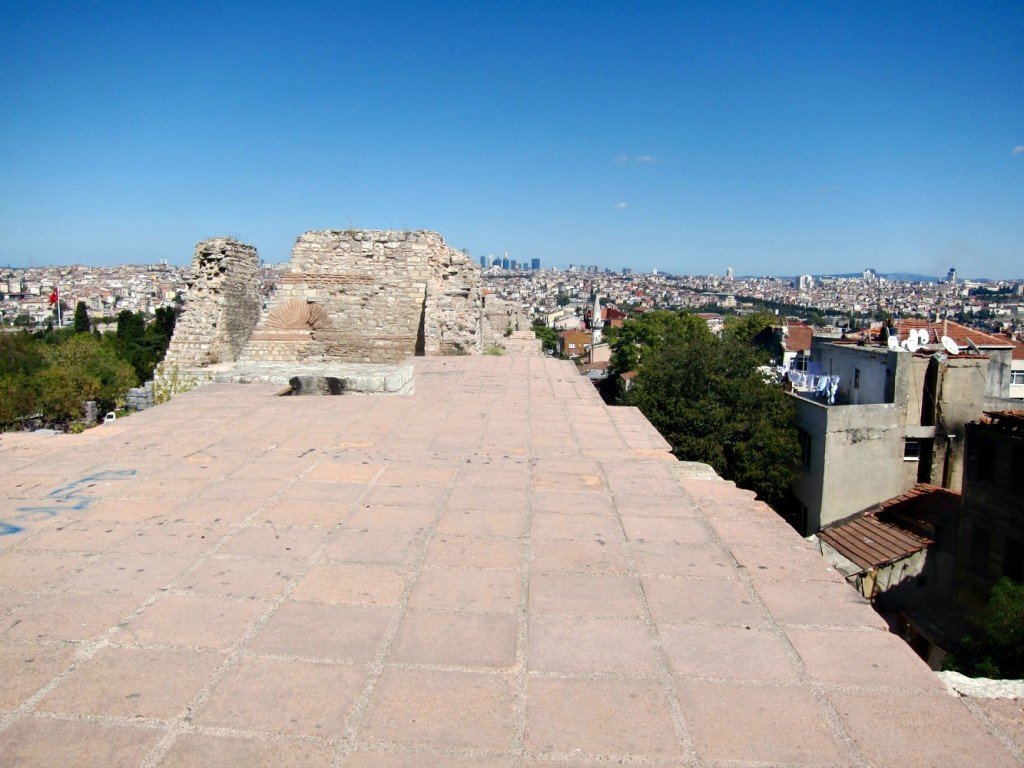 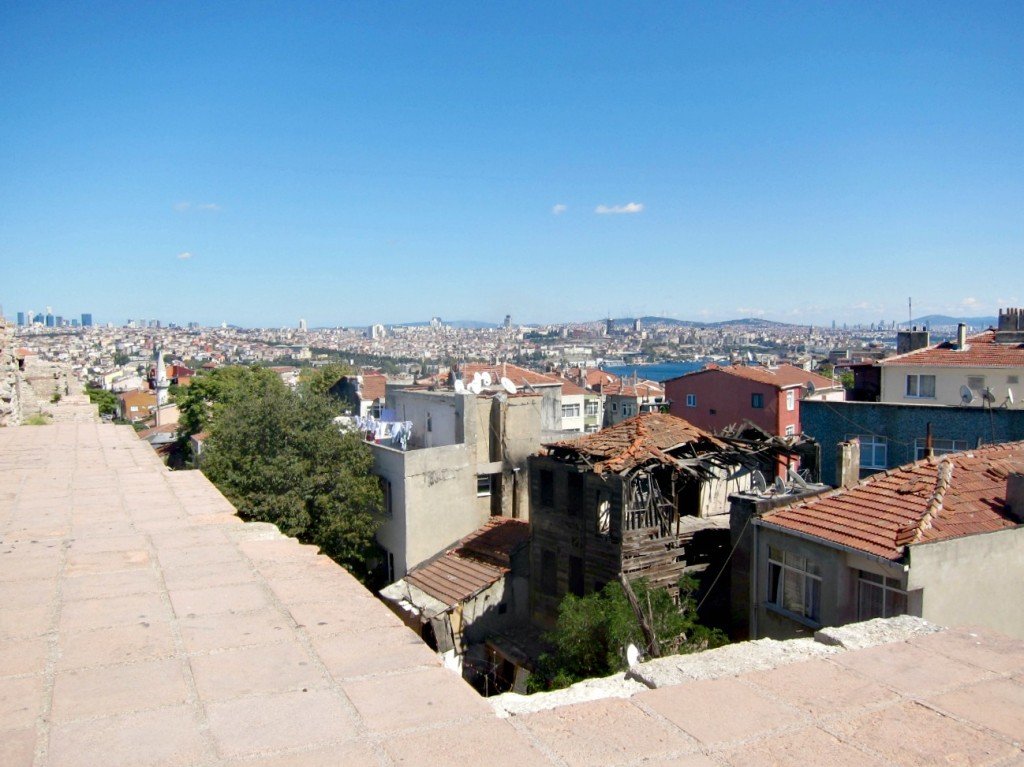 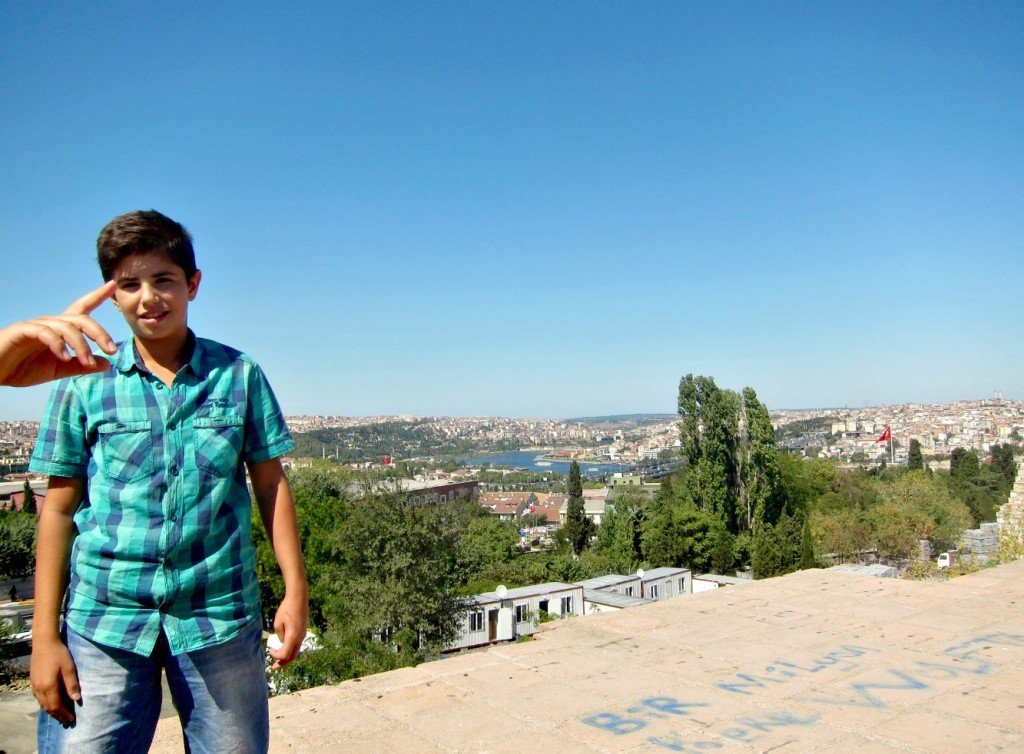 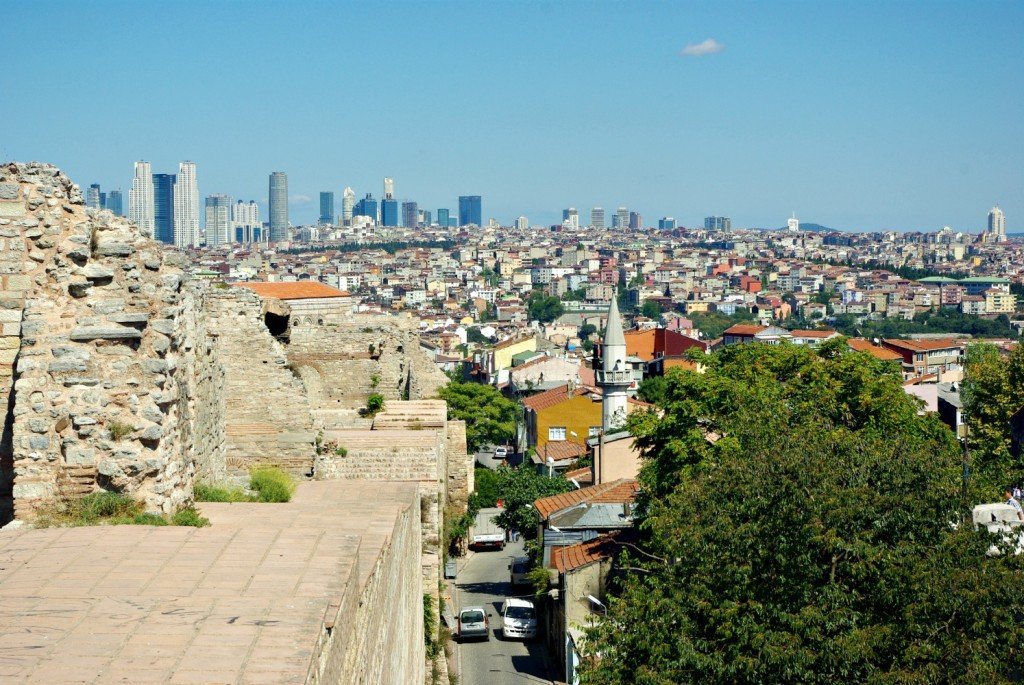 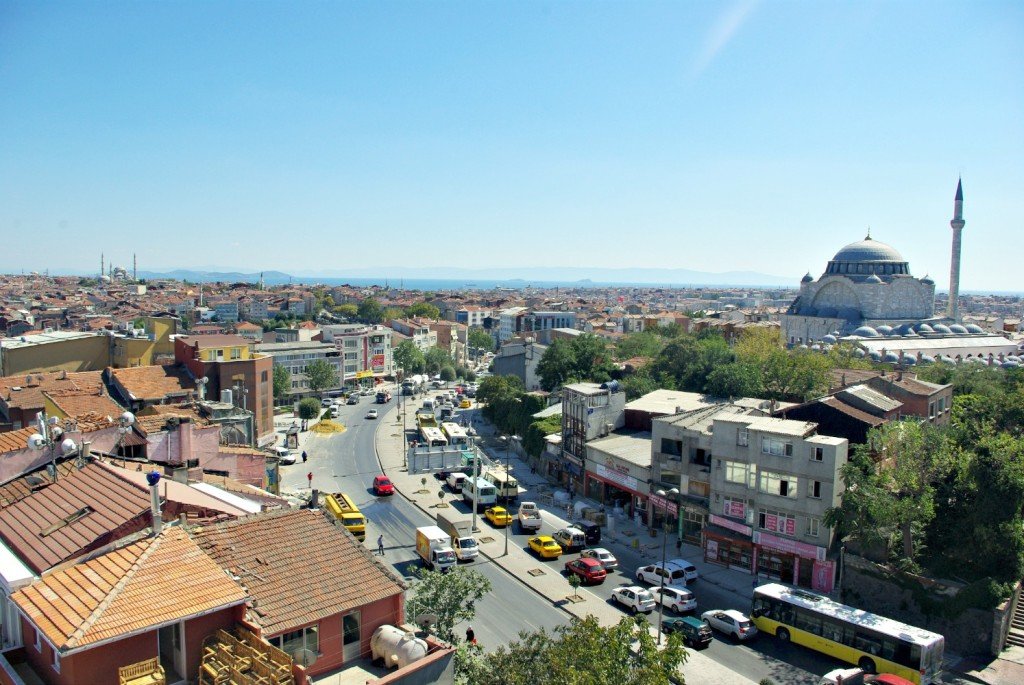 Eventually B.H. who was in his element exploring the extremities of the wall returned and it was time to descend – him nonchalantly going first and me following gingerly behind – where were those hooves!  He was on a quest to tackle another section of the wall that involved climbing a ladder to the highest point.  A point which he assures me had the best views of all. 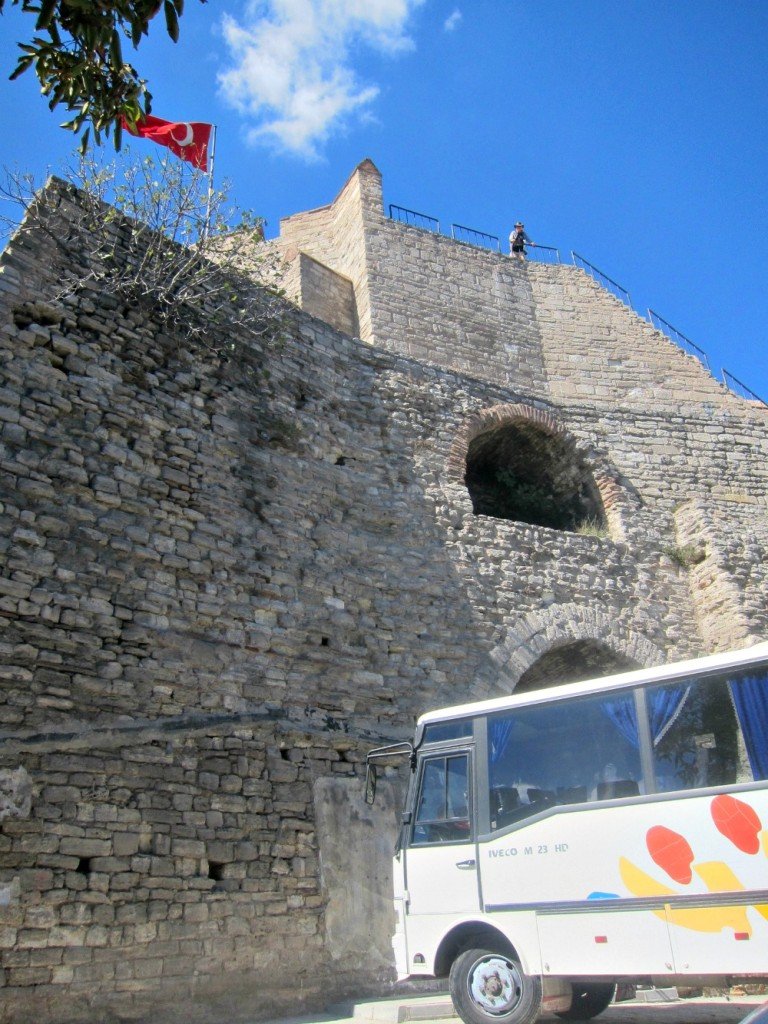 The only mention I found of the walls was a sentence in Lonely Planet’s Turkey, describing the Chora Church as being “Nestled in the shadow of Theodosius II’s monumental land walls”.  That one sentence however was enough to inspire me to go there.

I urge you to continue on uphill before or after visiting the Chora Church Museum and see The Best View In Istanbul for yourself!

For views of another city built on seven hills click HERE.

#1 FREE THINGS TO DO IN ISTANBUL.

This post is linked to Travel Photo Discovery where Noel has captured some great Japanese images.  Dawn from We Call It Junkin has invited me to post this article on We Call It Olde link-up as well, so if you like Olde things pop on over.