A Dotonbori night lights tour is one of the top things to do in Osaka Japan. Dotonbori canal runs through the Dotonbori district and following the canal is a great way of seeing the lights.

We love to wing it on holidays and our two weeks in Kyoto in November, were very much a holiday.  Only an eight hour flight from Cairns in North Queensland, Japan is a “close” destination for Aussies, as opposed to Europe which often turns into a 35 hour trip with plane changes.  One day toward the end of our Kyoto trip we spontaneously found ourselves in Osaka.

Just past Dotonbori Glico man is Dotonbori bridge and the corner where all the action happens.  The colourful lights that adorn Dotonbori Osaka come in the form of Crabs, Puffer Fish, Hands, Octopus, Cows and Dragons. Arrive early and spend time shopping, people watching and waiting for darkness to arrive.

The Osaka Schochiku-za Theatre was visible on the right as we turned down Dotonbori.

The theatre’s facade hailed back to 1927 when it was Japan’s first western theatre and the facade was thankfully kept during a 1997 revamp.  Seating over 1000 in two below ground and eight above ground floors, with the given name of  The Arc de Triomphe of Osaka, Shochiku-za holds traditional Kabuki performances 3-5 times each year.  Outlandish costumes and stylized actions purvey meanings to the Kabuki audience. 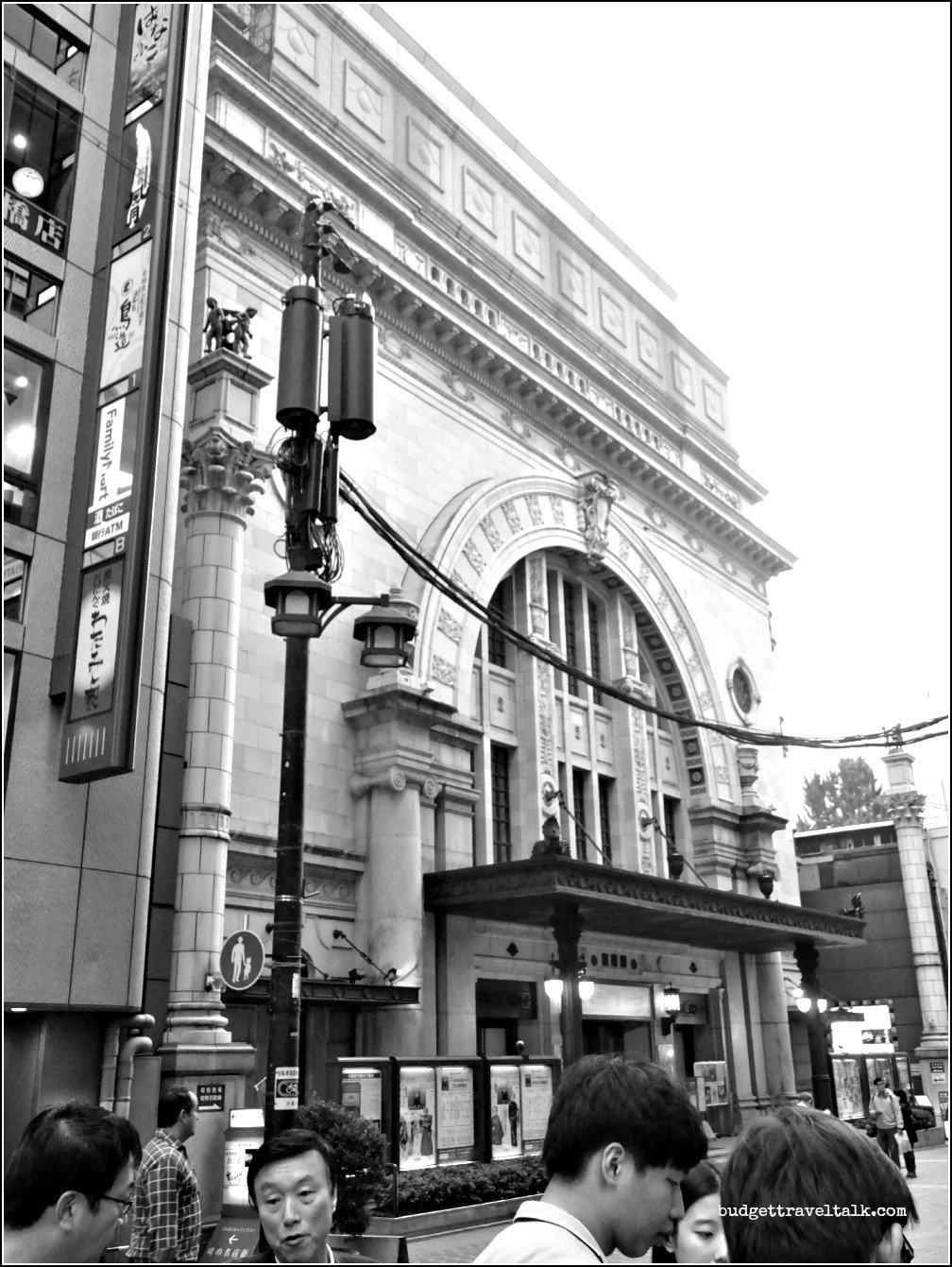 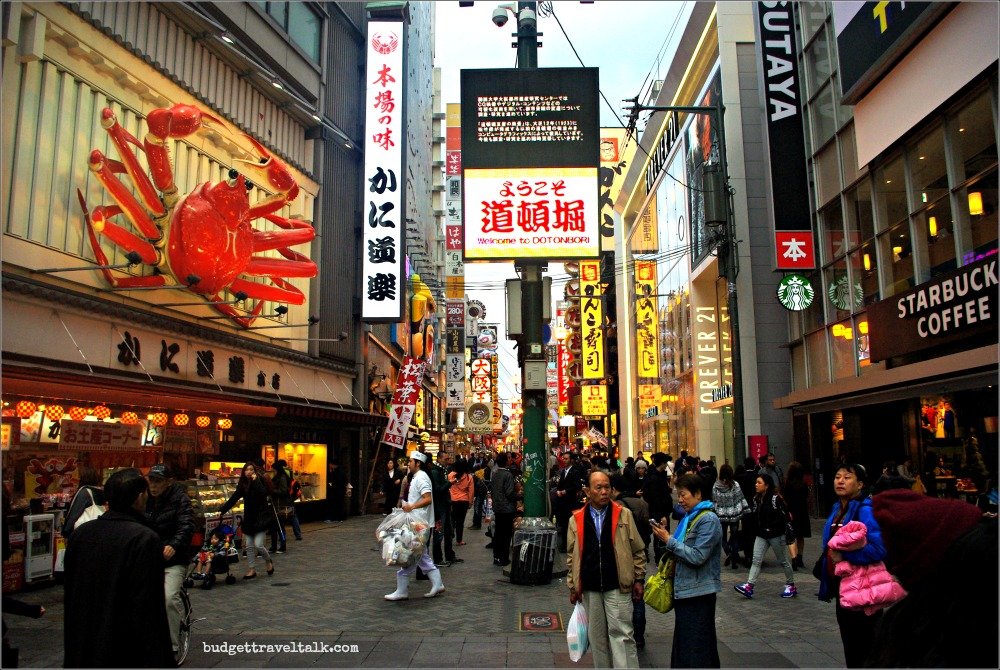 Looking up and left we found ourselves on the video screen above Honolulu Coffee. 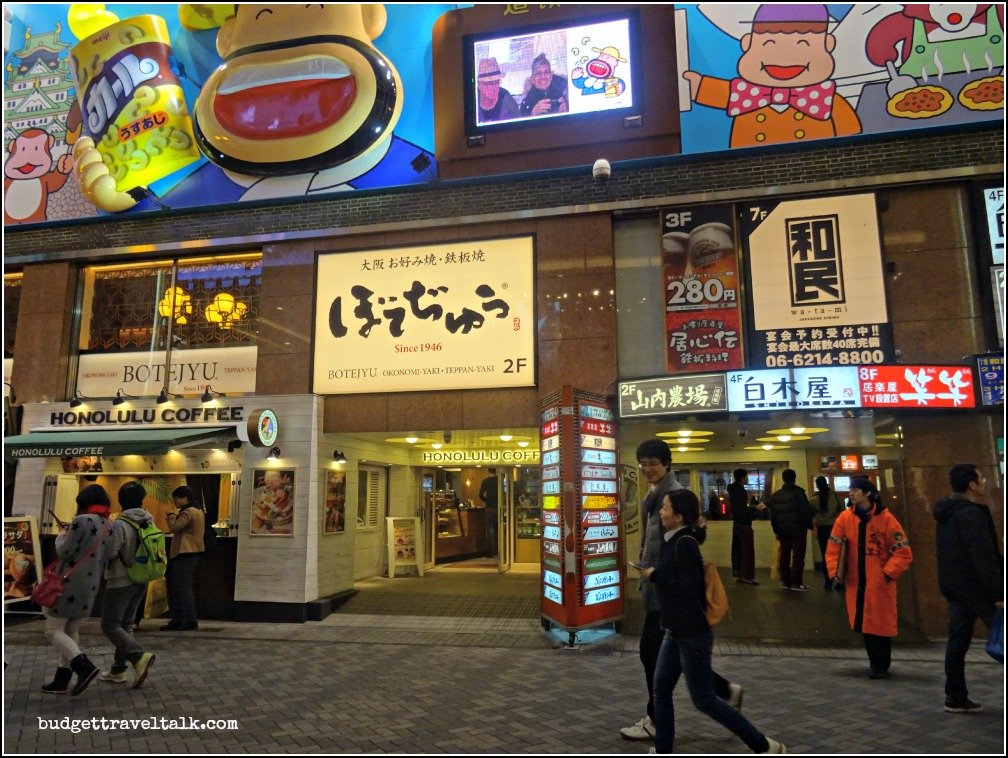 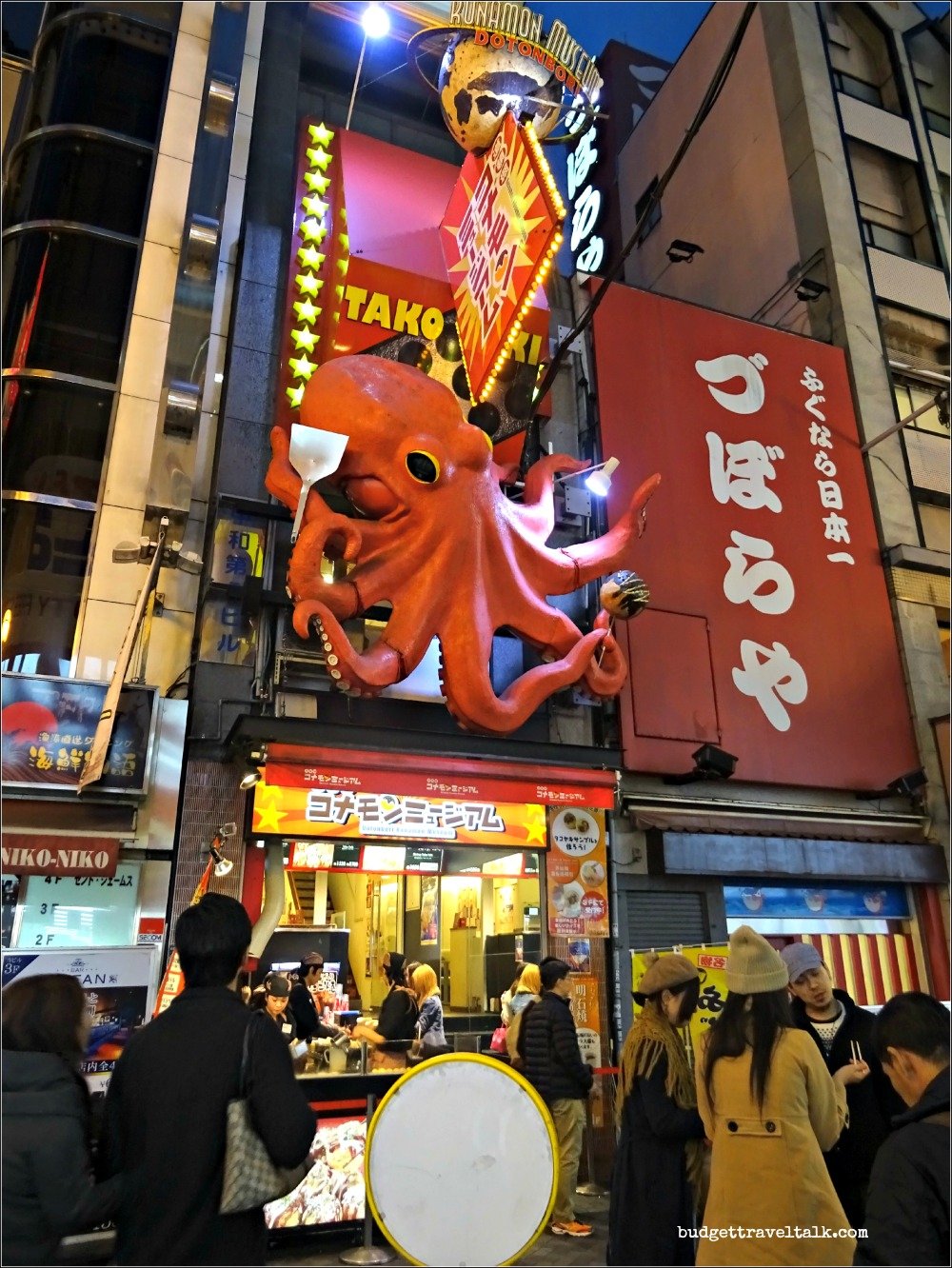 Must Eat in Dotonbori Osaka

Takoyaki  or Octopus Balls are balls of batter containing a piece of octopus tentacle within and lashings of brown sauce, mayonnaise, green seaweed and bonito shavings on the top. Takoyaki are widely available here as Osaka is their birthplace.

The bonito shavings on ours moved scarily of their own accord. 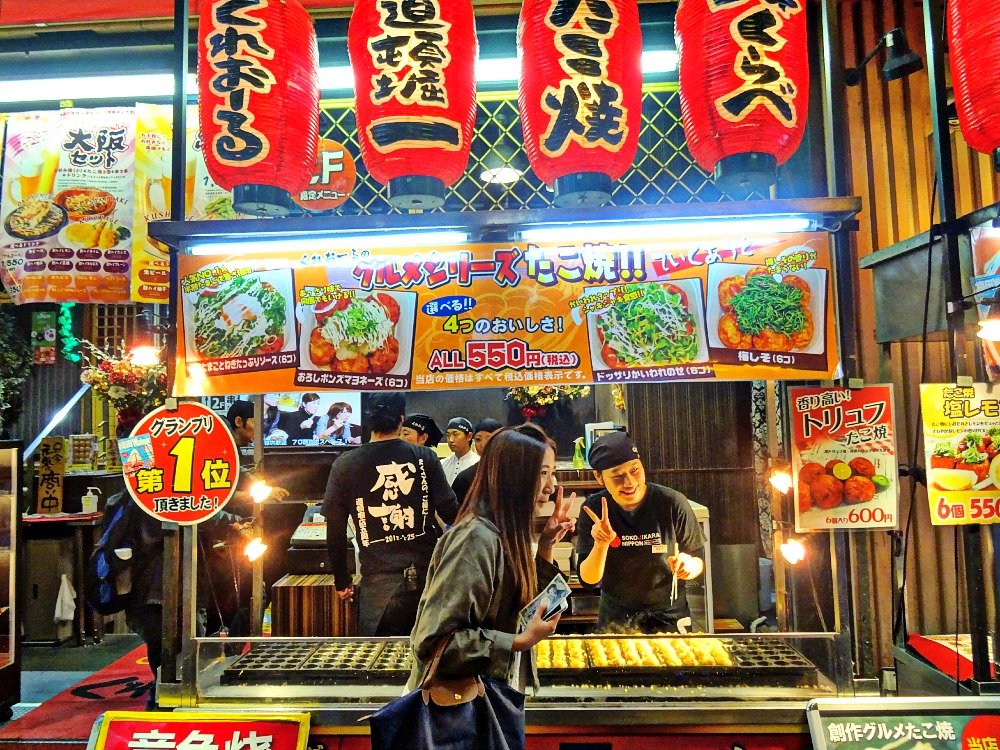 The Big Hand symbolizes Genroku Zushi, an affordable, quality sushi place in Dotonbori Osaka.  It took me a while to realize the hand was holding sushi, I thought it looked like a tongue. In my defence anything is possible in Japan.

No prizes for guessing what the Puffer Fish was advertising – enter if you’re game. 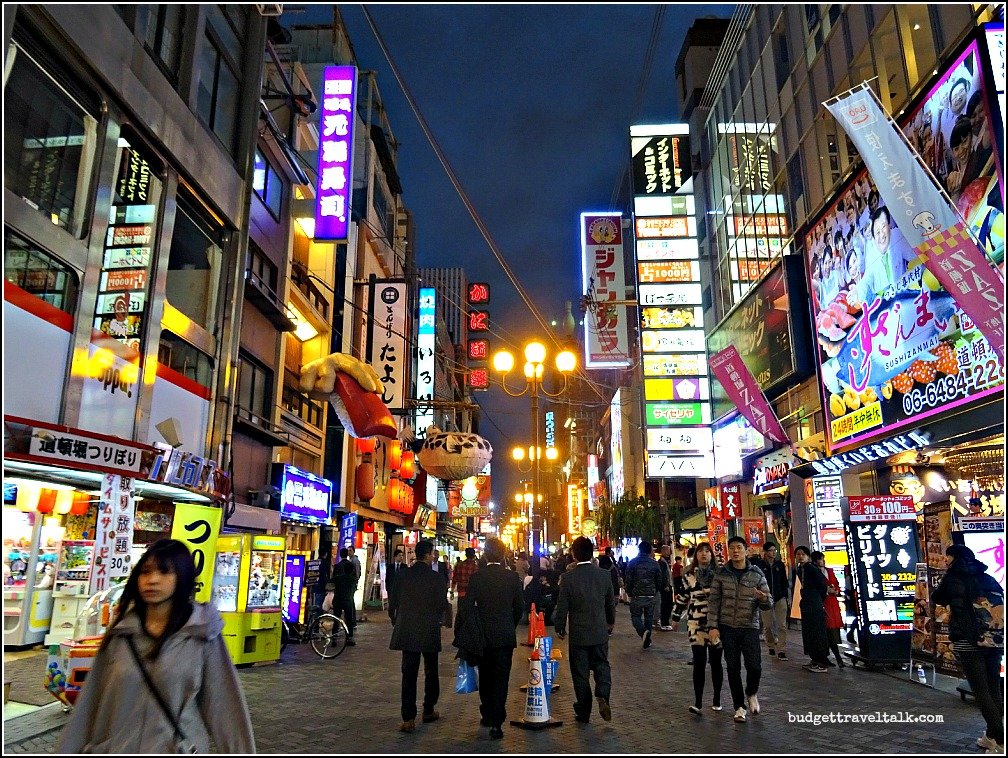 Kuidaore Tao is a superstar mechanical clown from 1950 and can be found drumming away in the foyer of a commercial building on the right. 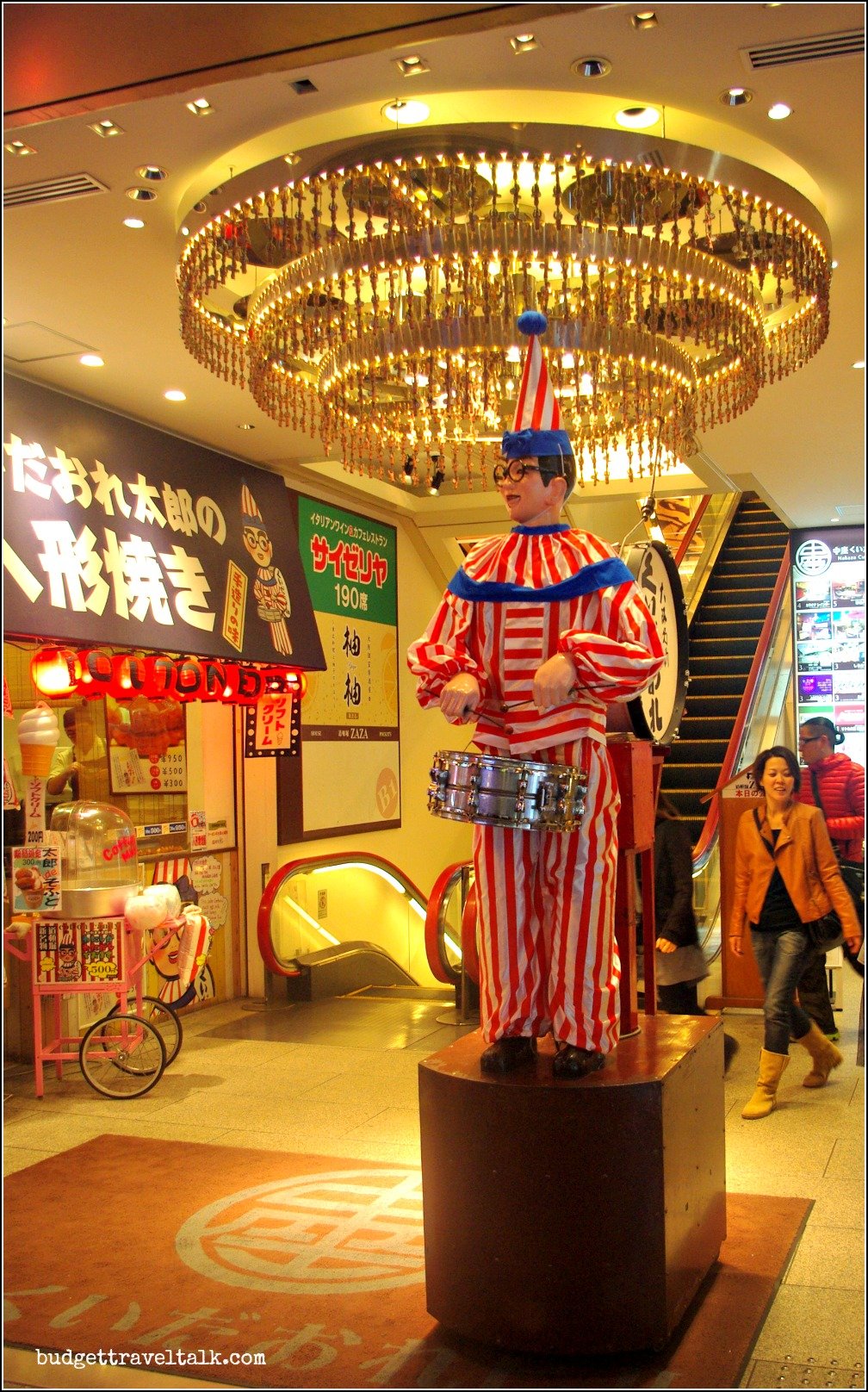 Turning right and right out of Dotonbori we went searching for Hozen-ji temple.  When this traditional area burned down it thankfully received special town planning permission to rebuild with narrow lanes instead of new wider requirements.  This decision means Hozen-ji is not out of place in it’s immediate neighbourhood. 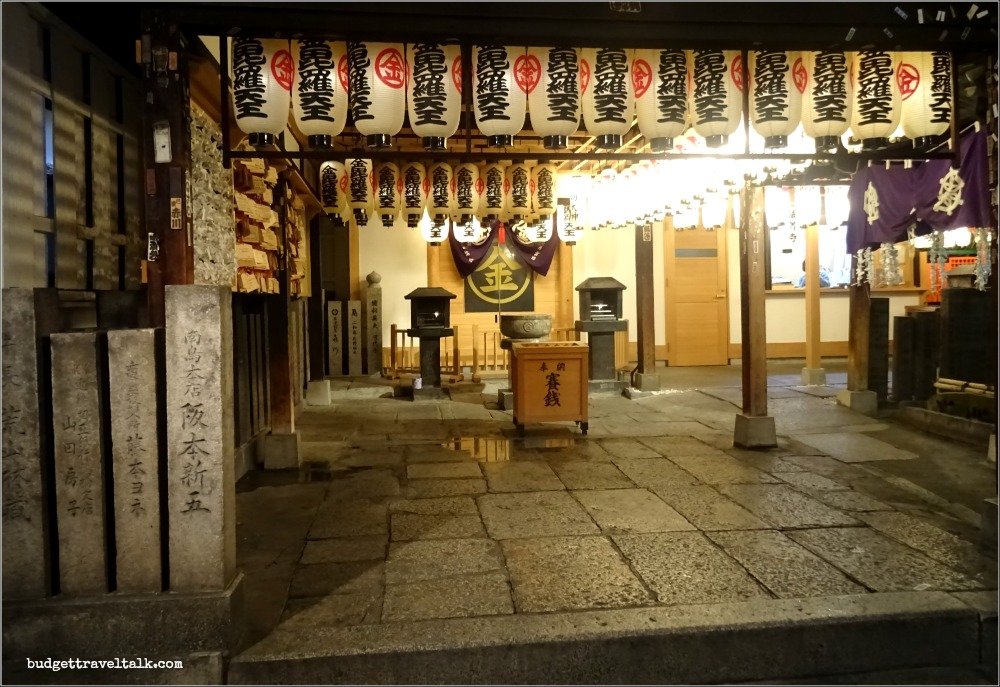 On the other side of the narrow lane was the moss covered Mizukake Fudo statue who delivers good fortune when water is trickled over him.  For a close up of the statue click on the link to Muza-chan’s Guide to Japan. 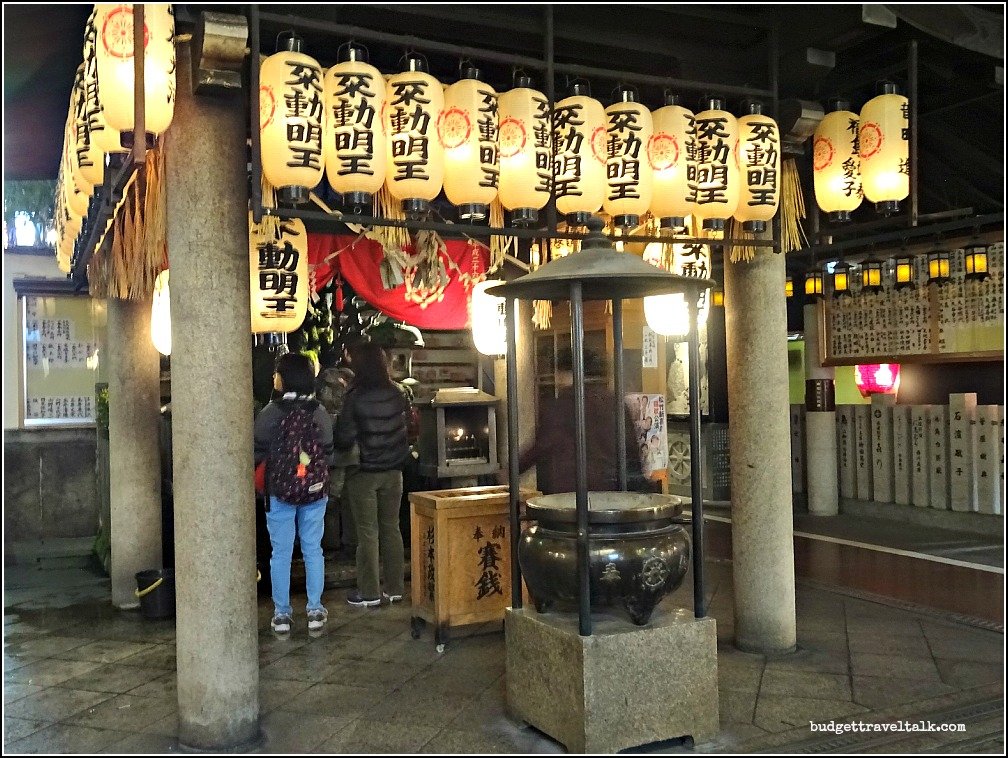 On our way back to the canal we met a Golden Dragon, symbol of the famous Ramen restaurants and a cat that was in his cups. 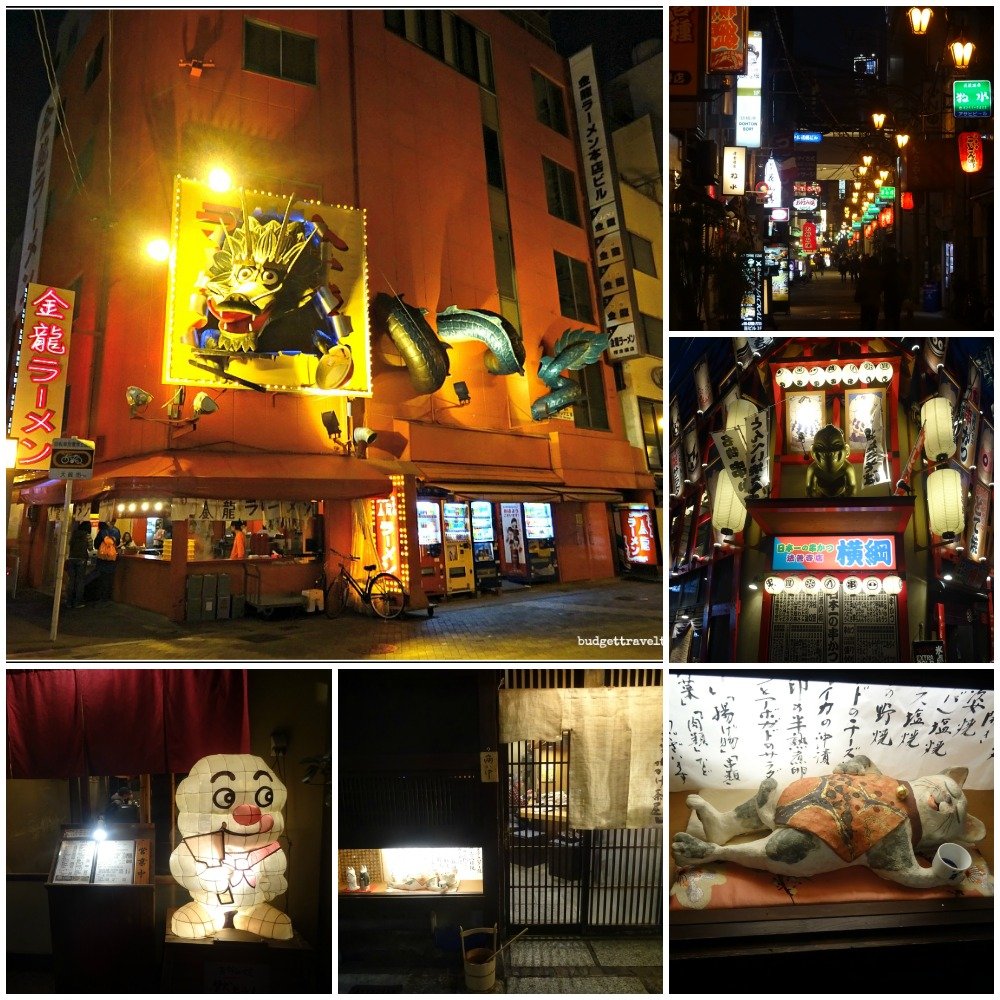 Before retracing our steps beside the canal and down the Mido-Suji-Dori (boulevarde) to Shinsaibashi Station and home to Kyoto, we revisited the bright lights and squeezed in some tasty gyoza.  Even though they were produced in a mechanical way, they were super tasty, the quality of food in Japan being superb. 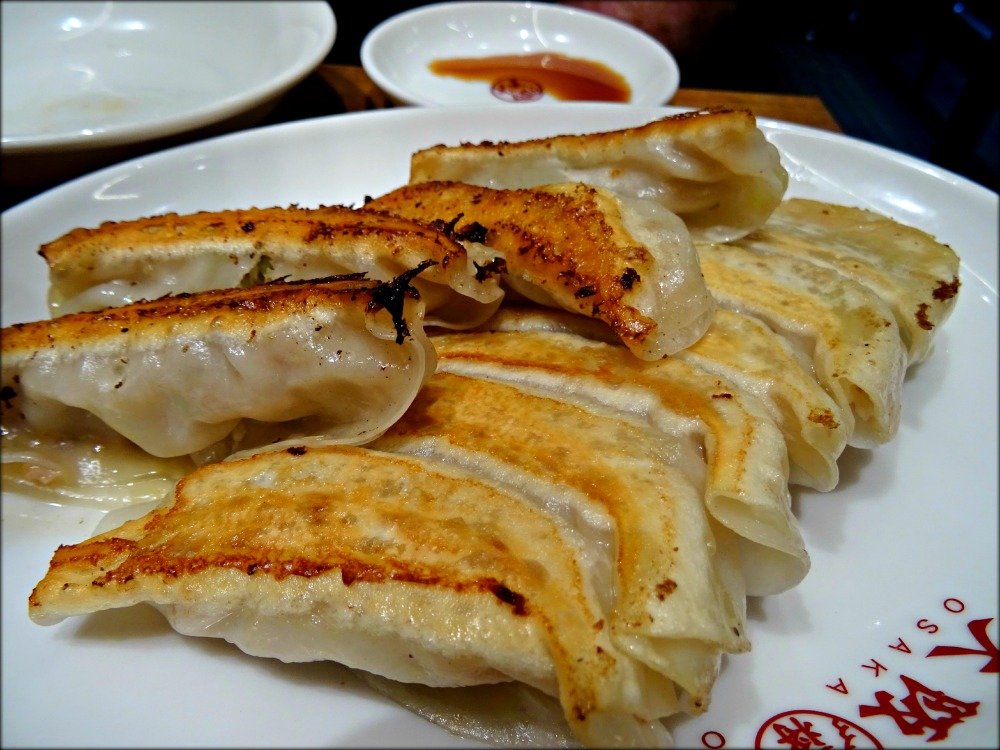 Here is an interesting back view of the buildings along the canal, just to show it was not all glitz and glamour.  The Gyoza Restaurant would have been in one of these buildings. 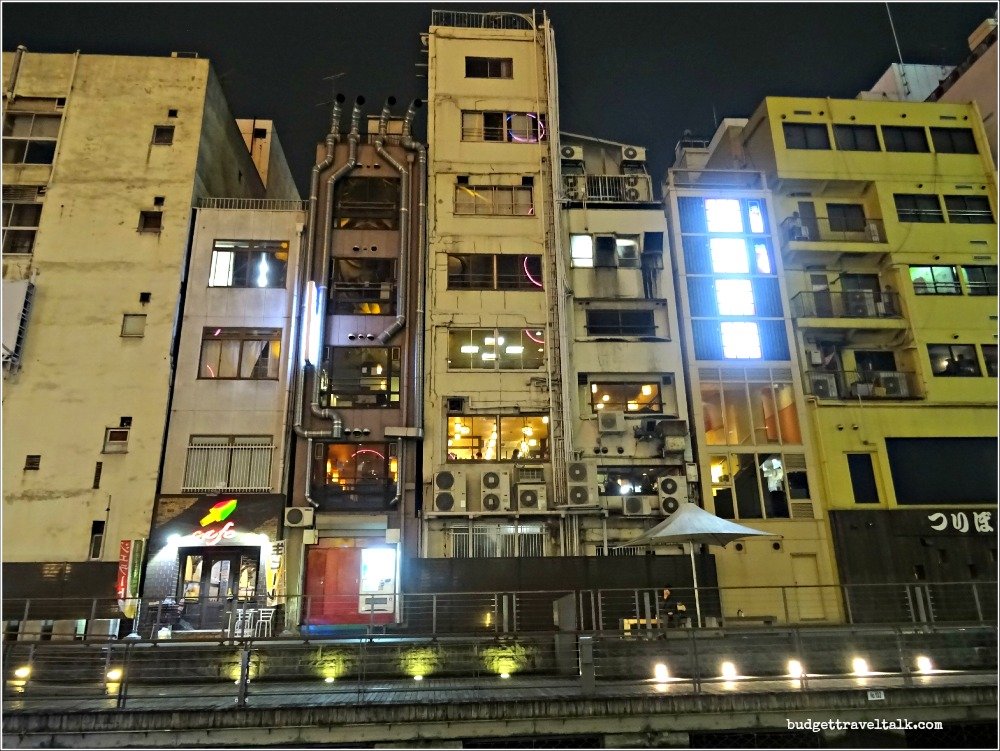 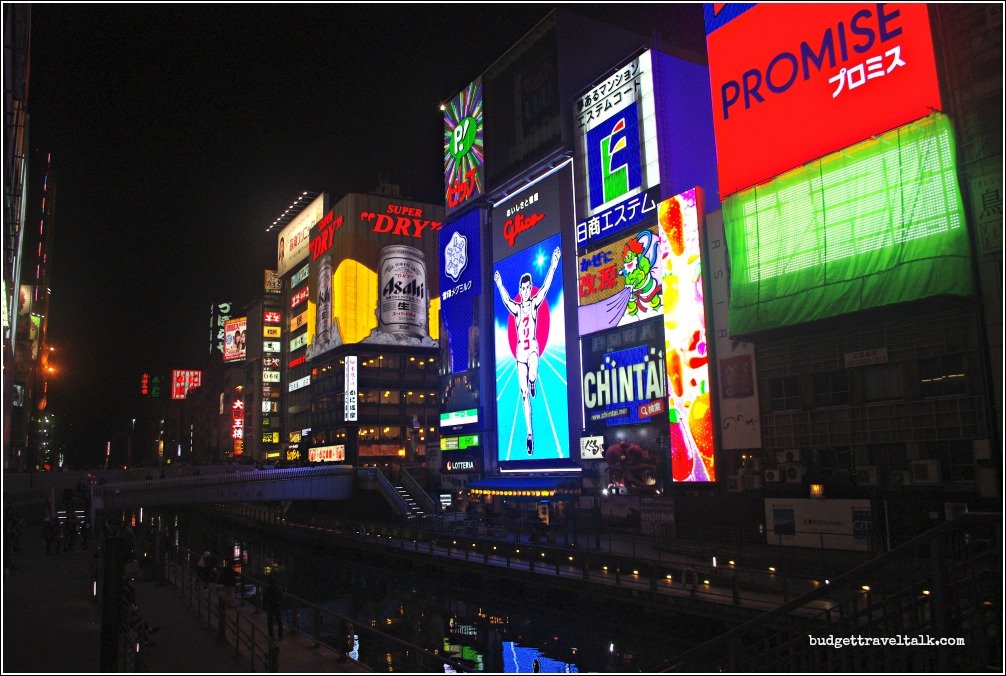 Have you been to Dotonbori Osaka?

Which were your favourite bright lights?