After days of rubbing shoulders with kimonoed ladies, admiring temple gardens and ringing Shinto Shrine bells, we awoke one morning blew off the incense and headed for the big smoke.

The big city lights of Osaka.

As always things were afoot at the Airbnb house we shared in Southern Higashiyama District of Kyoto.  With five rooms, house hellos and goodbyes were a daily occurrence and by the time we arrived at Kyoto Train Station it was already 12 noon.

Hitting up our friendly and ever-helpful Japan Rail (JR) Lady, we came away with two return rapid train tickets. She took us to an internal room to buy these same day return tickets which were significantly cheaper than the normal 560 yen each way price, purchased at the ticket machines in the open area.

We wasted no time finding Track 4/5 for the departure time of 12.15.  The Kyoto train system was so precise that standing lines for specific trains were marked at intervals on the platform floor and the train doors opened at those precise places.  You have to admire such efficiency. 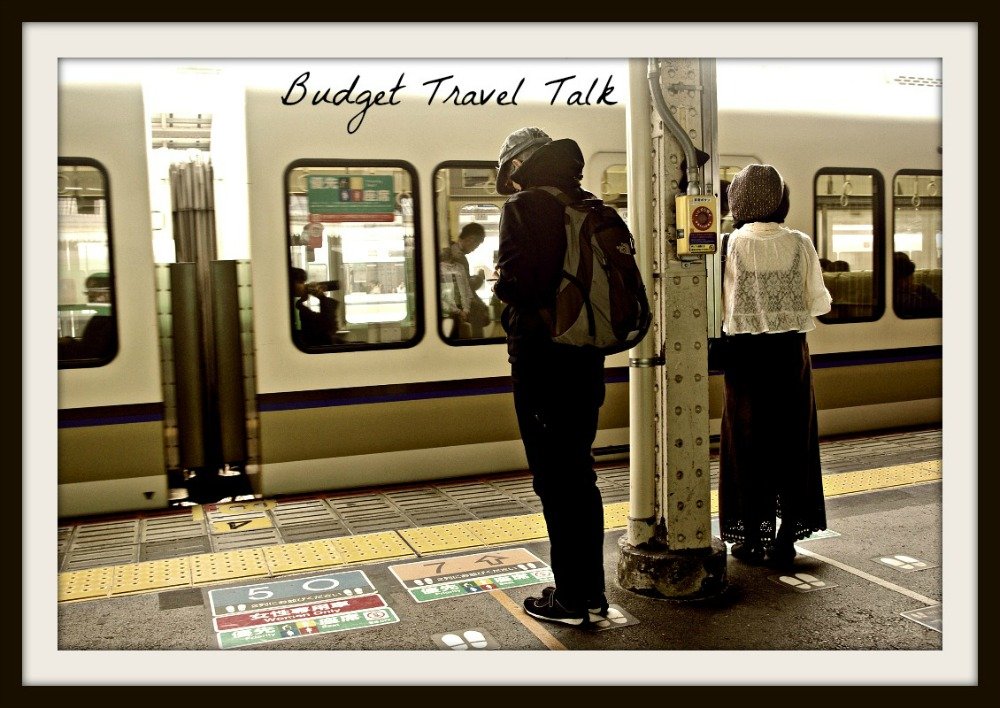 Half an hour later the train arrived at Osaka Station.  To catch the subway to Shinsaibashi you need to migrate beneath ground level to Umeda Subway Station.  Our trusty JR lady from Kyoto had taught us well and tickets were purchased from a machine for the Midosuji line to Shinsaibashi without any problems.

Above ground at Shinsaibashi, a Teppanyaki Cafe provided a cheap 650 Yen Yakisoba with complimentary iced tea. Our meals were prepared by the Chef (Japanese people probably cook it themselves) and placed on the shared grill plate between us. We could leave the meals on the grill to keep hot, taking portions as we pleased.

This neighbourhood west of Shinsabashi Station gained it’s name from selling American lighters and T-Shirts after the war. Japanese teenagers visit for the funky boutiques, vintage clothes and record shops, while lamp posts stalked the streets like Alien stick insects near the iconic stark Triangle Park.  The idea is to stand in the line for some Octopus Balls from the popular Takoyaki place across the street and settle in to watch the parade of teenage fashionistas. 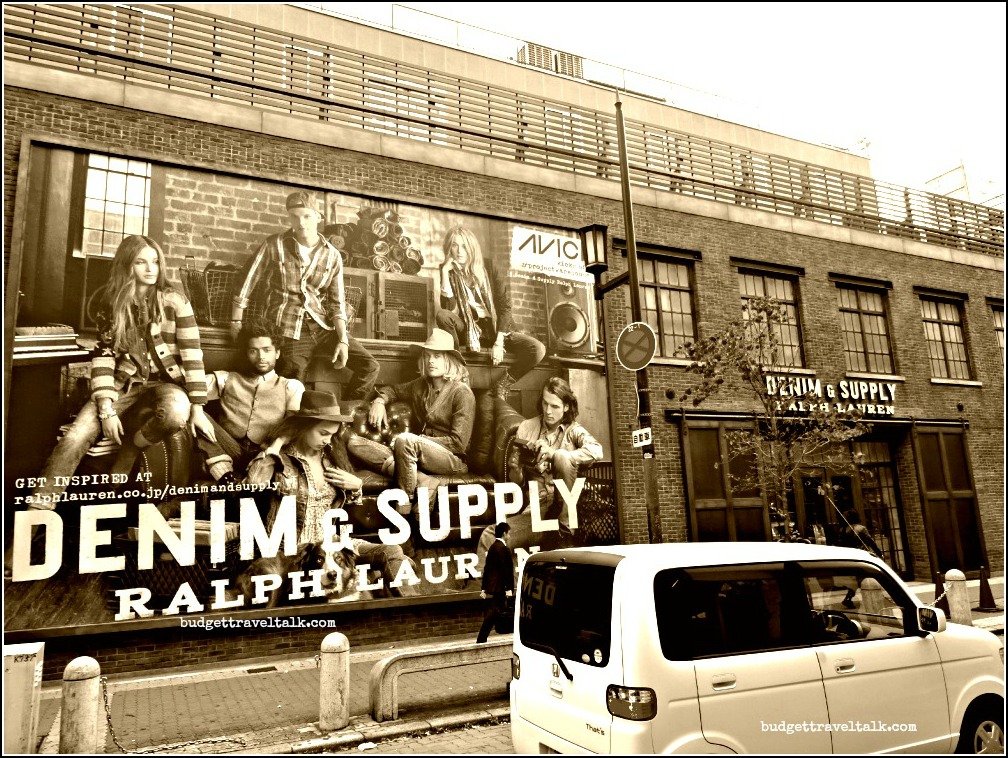 Triangle Park.  Isn’t it an inspiration that this minuscule piece of real-estate could become a well-known landmark. 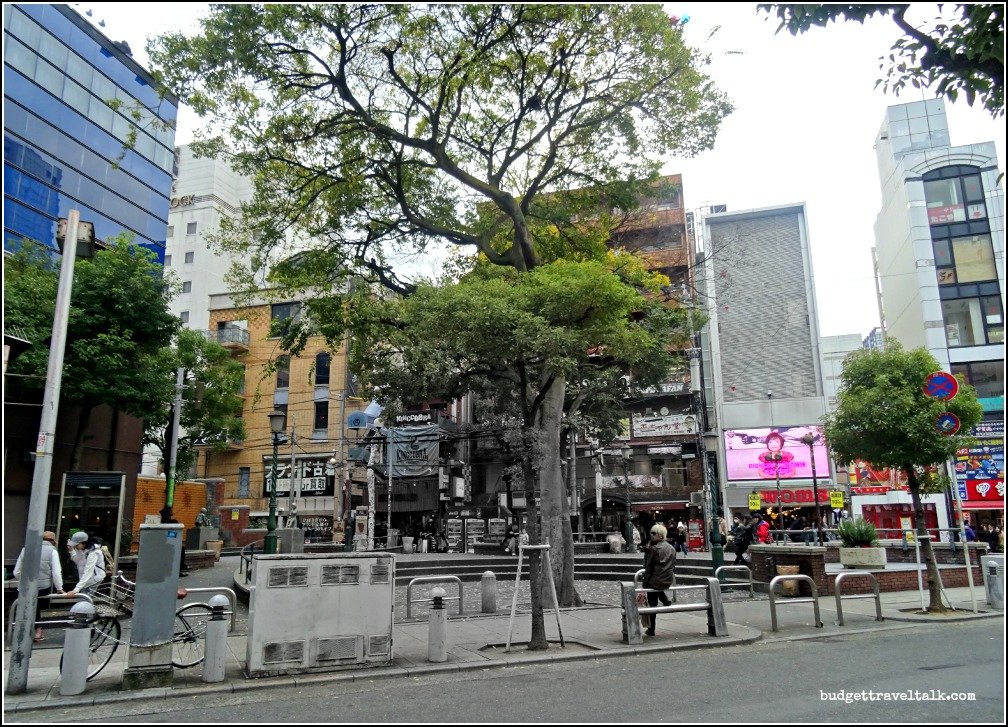 Someone had placed a cigarette in the girl’s hand.   If you look long enough you can see this statue in the photograph above. 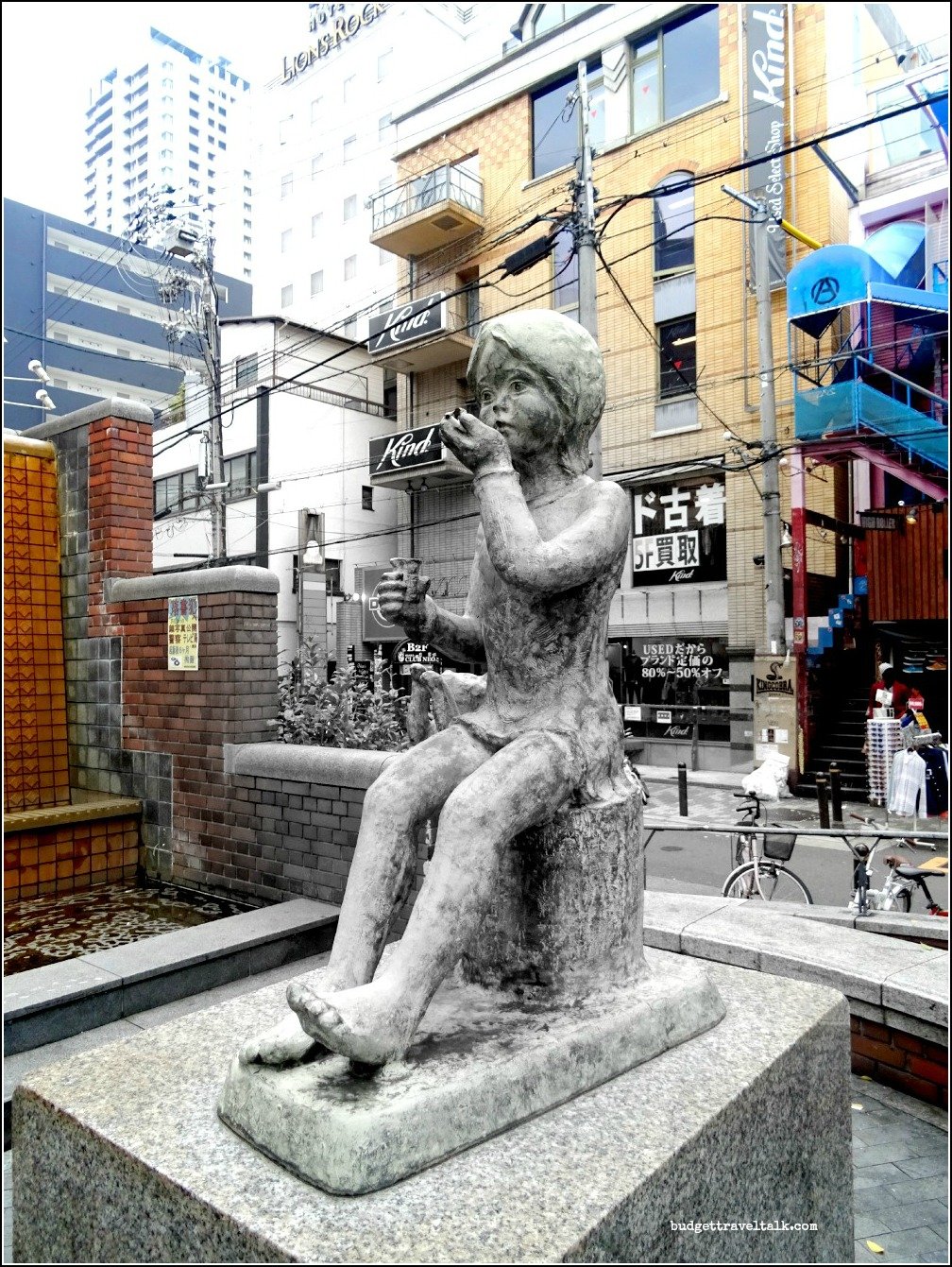 Shinsaibashi-suji – a shotengai or market street.

Leaving Ame-mura cross over Mido-Suji the Barcelona-esque boulevard that followed the Umeda and Shinsaibashi subway route above ground.

Shinsaibashi-suji – a long covered street that I would call a mall is full to the rooftops with restaurants, boutiques and these mannequins swinging on high. 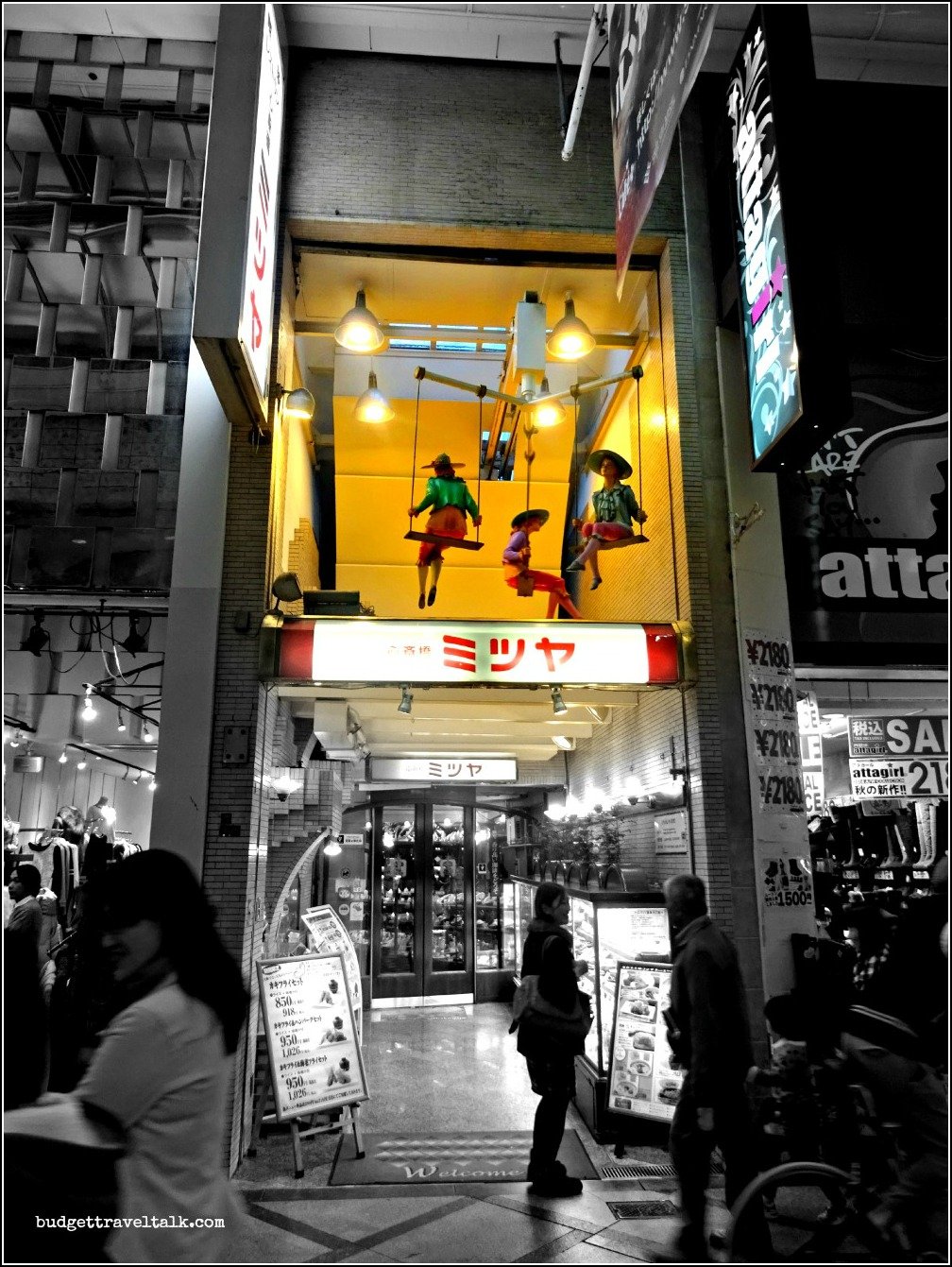 At the end of this extravaganza of shops is Ebisu-bashi (bridge) an excellent place to regroup, enjoy the views and people watch.

Osaka is dark by 5 p.m. in early November and as day turns to night the scene transforms.

Looking back to the masses of happy shoppers coming down the mall is an eye-opener.  Strangely it didn’t seem as crowded when we were in the fray.

Even Marty, a notorious non-shopper emerged from Shinsaibashi-suji with a shopping bag and a new warm jacket. Yes I did too, but that is no surprise.

Sumo Wrestling is considered Japan’s Official National Sport but in reality Shopping is the sport of the people. 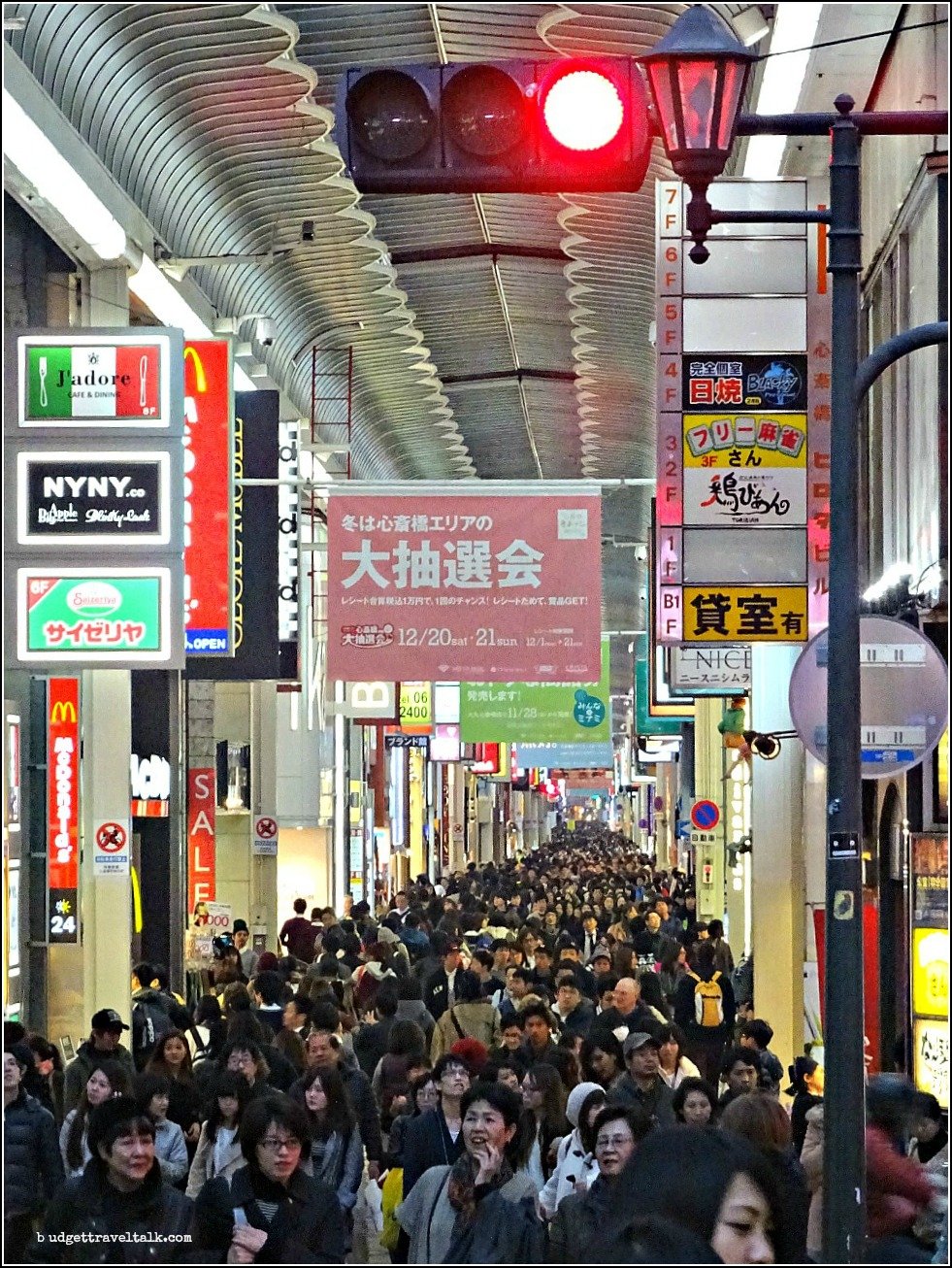 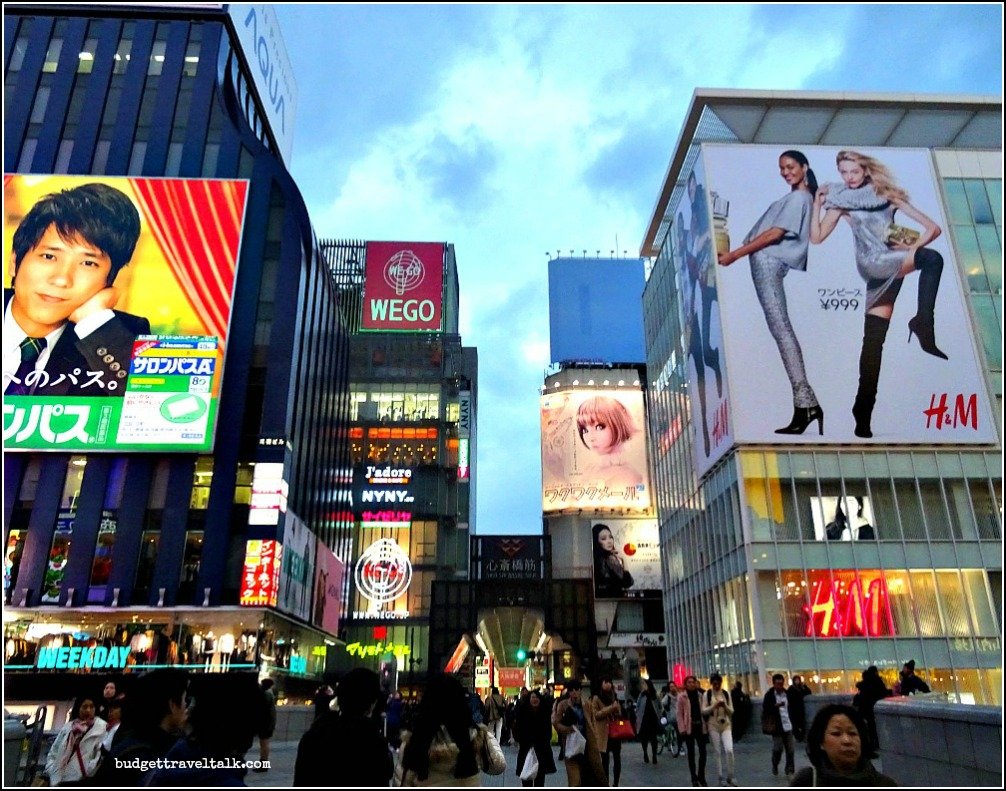 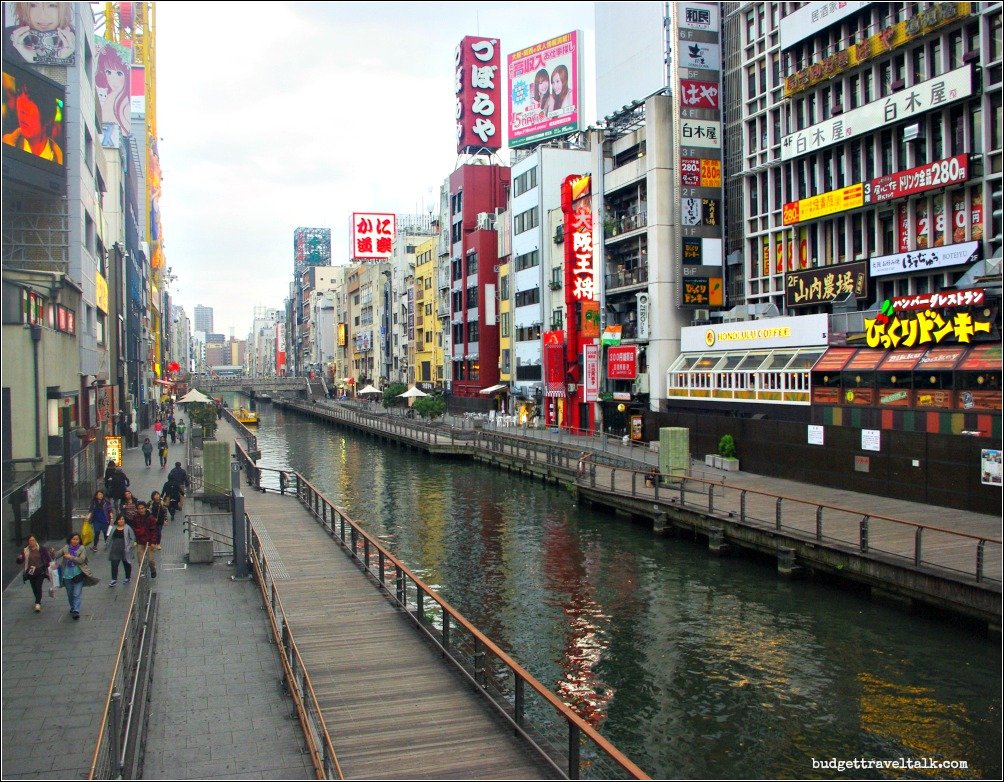 As day turns to evening the crowd builds to marvel at Glico Man.  This constantly triumphant athlete crosses the finishing line in an advertisement for confection company Ezaki Glico.  Does sugar give him his winning streak?  The Icon was first erected in 1935 with this current 6th edition being updated from Neon to LED in October 2014.  The 20 x 10 metre sign is powered by 140,000 led’s and is lit every night from 6 pm till midnight. 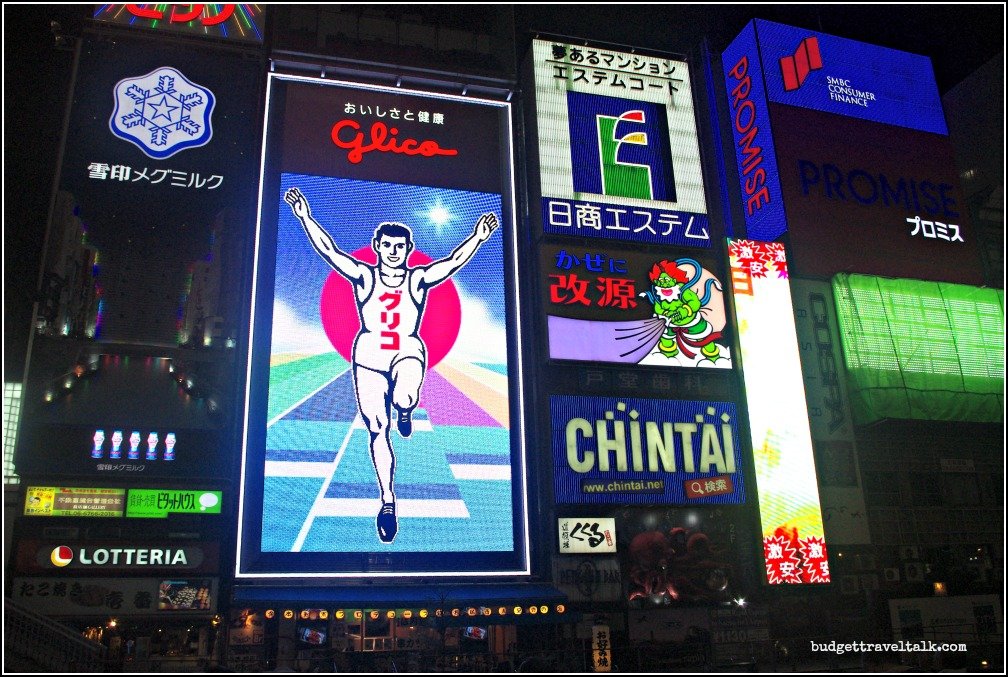 Glico Man marks the beginning of Dotonbori entertainment area,  whose delights I’ll be sharing in a future post.

The already budget conscious each way fare for JR trains is reduced if a return same day ticket is purchased. Ask the JR staff to help you.

The JR Kyoto/Osaka trip is free for JR Pass holders.

The southern end of Ame-mura in Osaka is full of Izakaya – cheap and cheerful eating and drinking after dark.