Madrid has more than 40 parks within it’s Urban limits, but none are more popular than the 350 acre Retiro Park.  Within walking distance of the historic centre, it is popular every day, but Sunday is the day that Madrilenos visit the garden en masse.

Originally the gardens of the Palace, it was opened to the Public in 1767 and became the property of the City in 1868 upon the overthrow of Queen Isabella II.

Already footsore from the cobblestones of Segovia that morning and trying to cram as much as possible into what remained of our last day in Madrid, we gladly took the Metro arriving at the well placed Retiro Stop.

It was spring time and the green water of the man made pond was dotted with row boats. 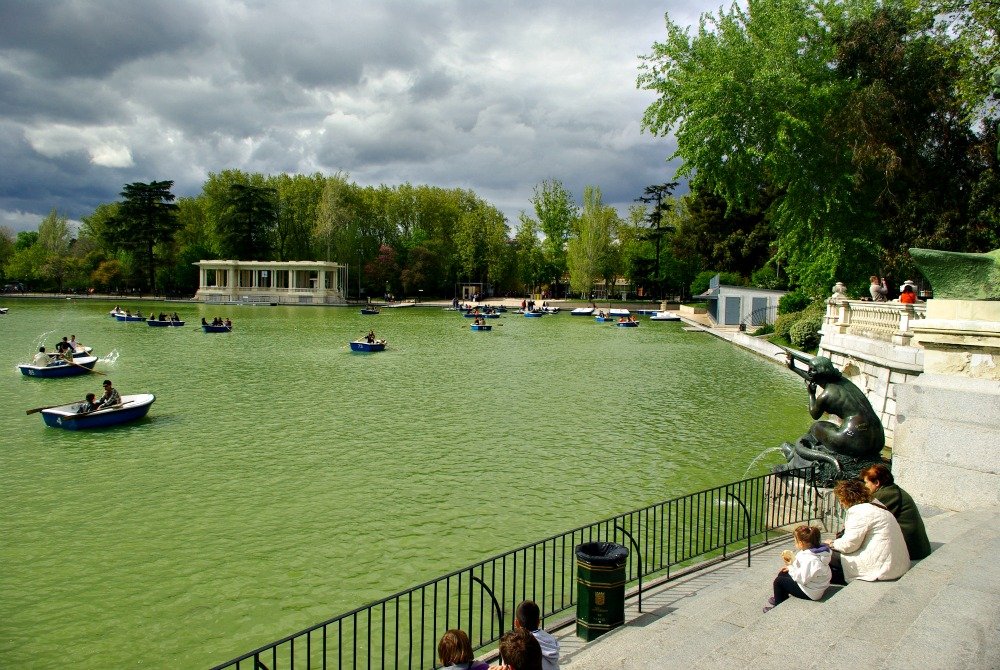 A rather grand monument of a mounted King Alfonso XII dominates a semi circle of columns, with steps that progress down to the pond.  These steps, where drumming circles form today, and where visitors and locals alike congregate to watch the boat action, are on the exact same spot where Felipe IV walked on an over the pond pier in the early 1600’s. 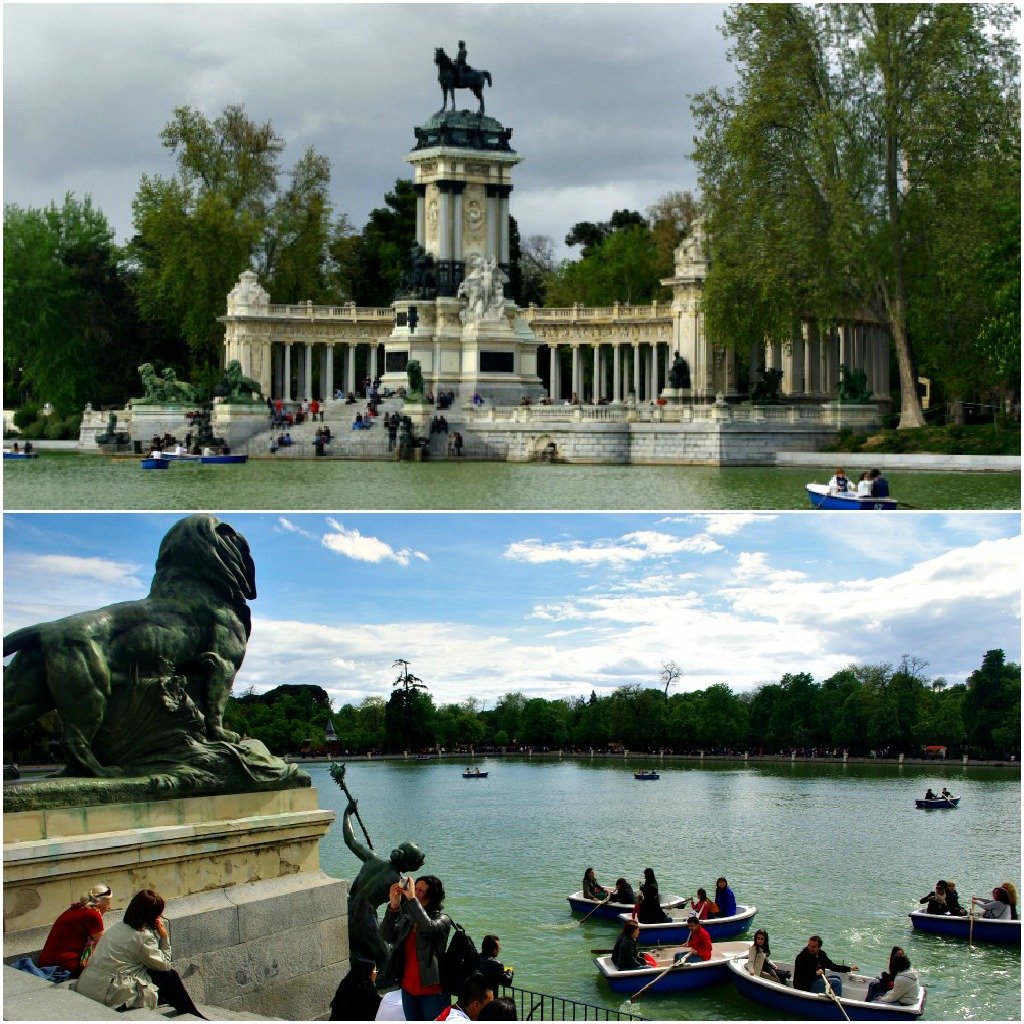 Two of the park’s current buildings, the Palacio de Velázquez (1884) and the Crystal Palace (1887) were designed by Ricardo Velázquez Bosco who honed his skills working on renovations of the illustrious ALHAMBRA of Granada and MEZQUITA of Cordoba. 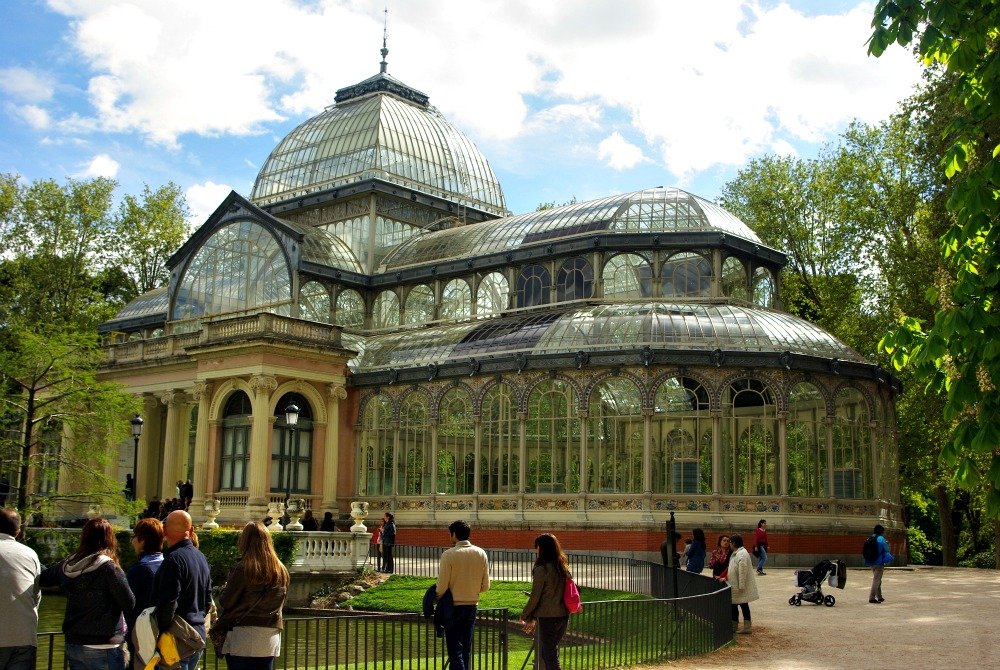 Constructed of glass and Iron on a base of brick, and decorated with tiles, the overall appeal of the building is that of a magical palace.  Designed to be relocated, it still sits on the original site beside it’s own man made pond.  Although vacant when we were there in April,  this fantastical Palace, is usually home to art exhibitions.

I was captivated and wished it had been open so I could have entered and dreamed a little, looking to the skies through the transparent roof, and if at night maybe to the stars. The pond in the forecourt and the trees that overhung from the gardens behind, added to it’s magical appeal. 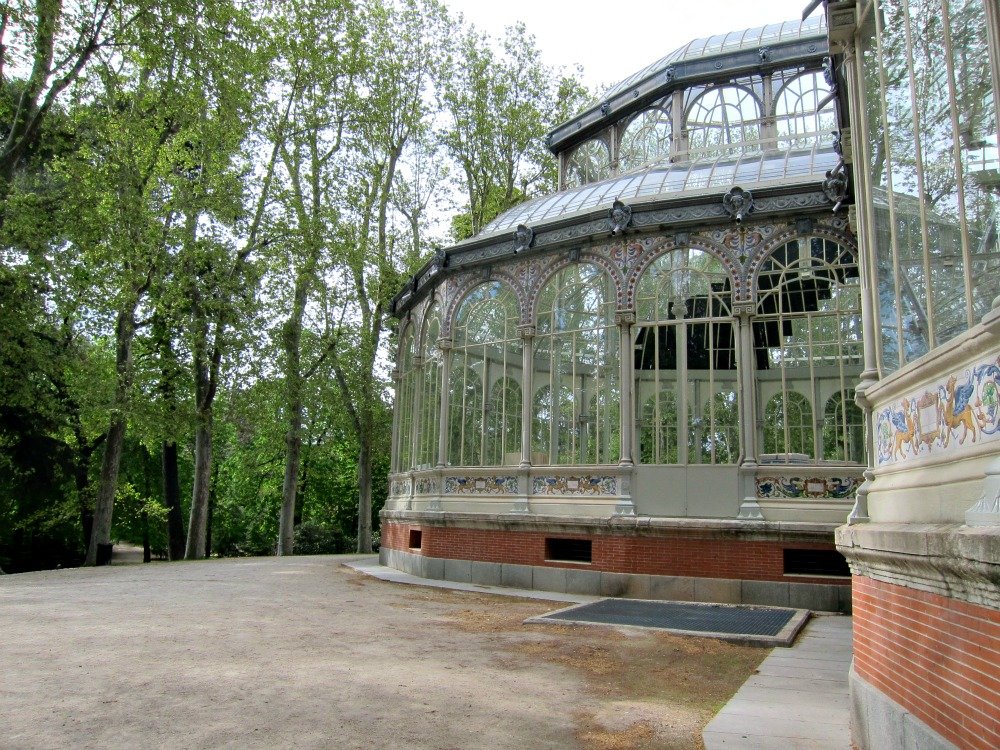 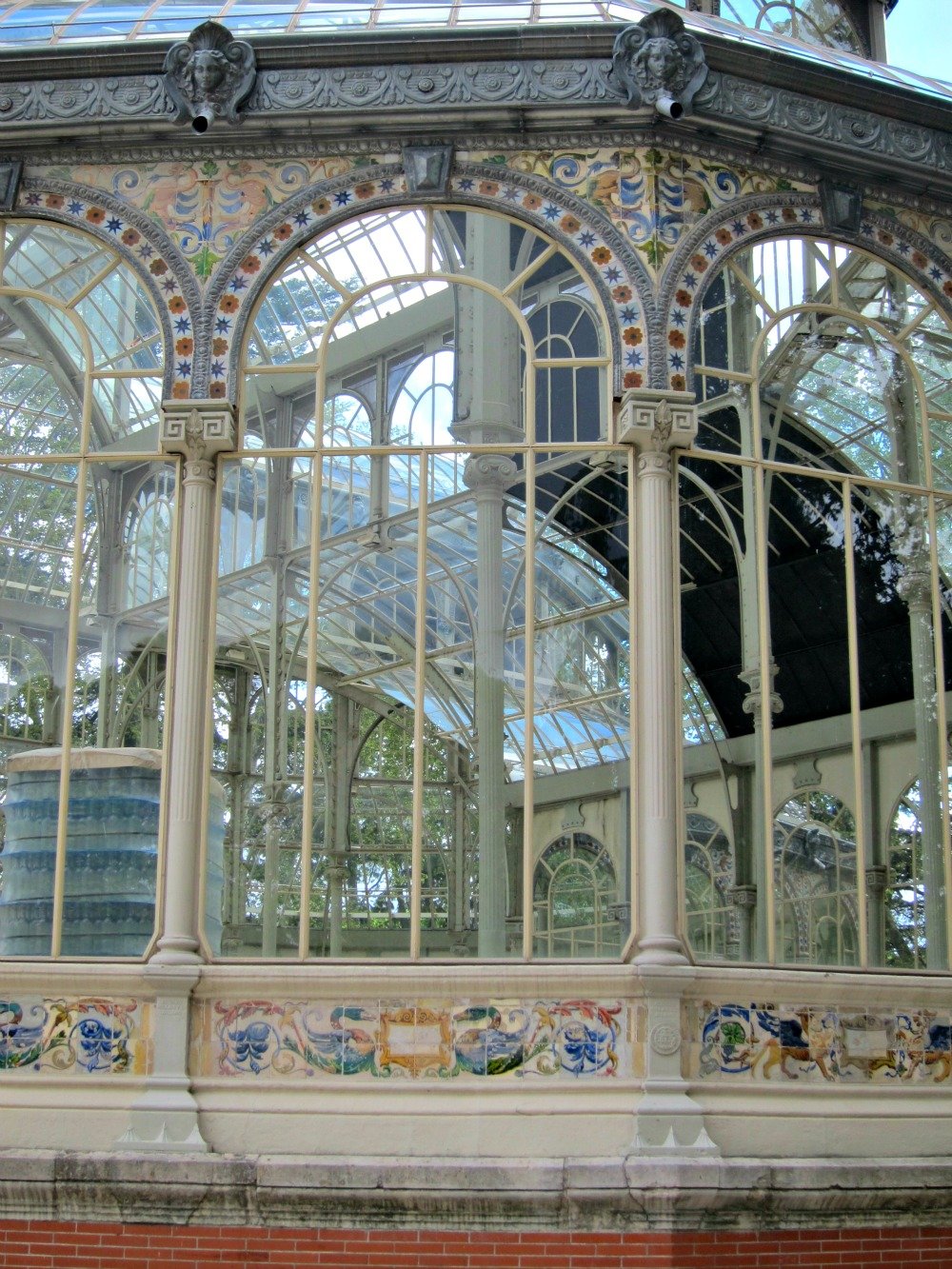 In reality it was built as a greenhouse to display the flora and fauna of the Philippines, a once Spanish colony.  It seemed contradictory that such a structure was built merely to house an exhibition.  Amazingly there is supposedly another such beauty situated in London, upon which this Crystal Palace was modeled. 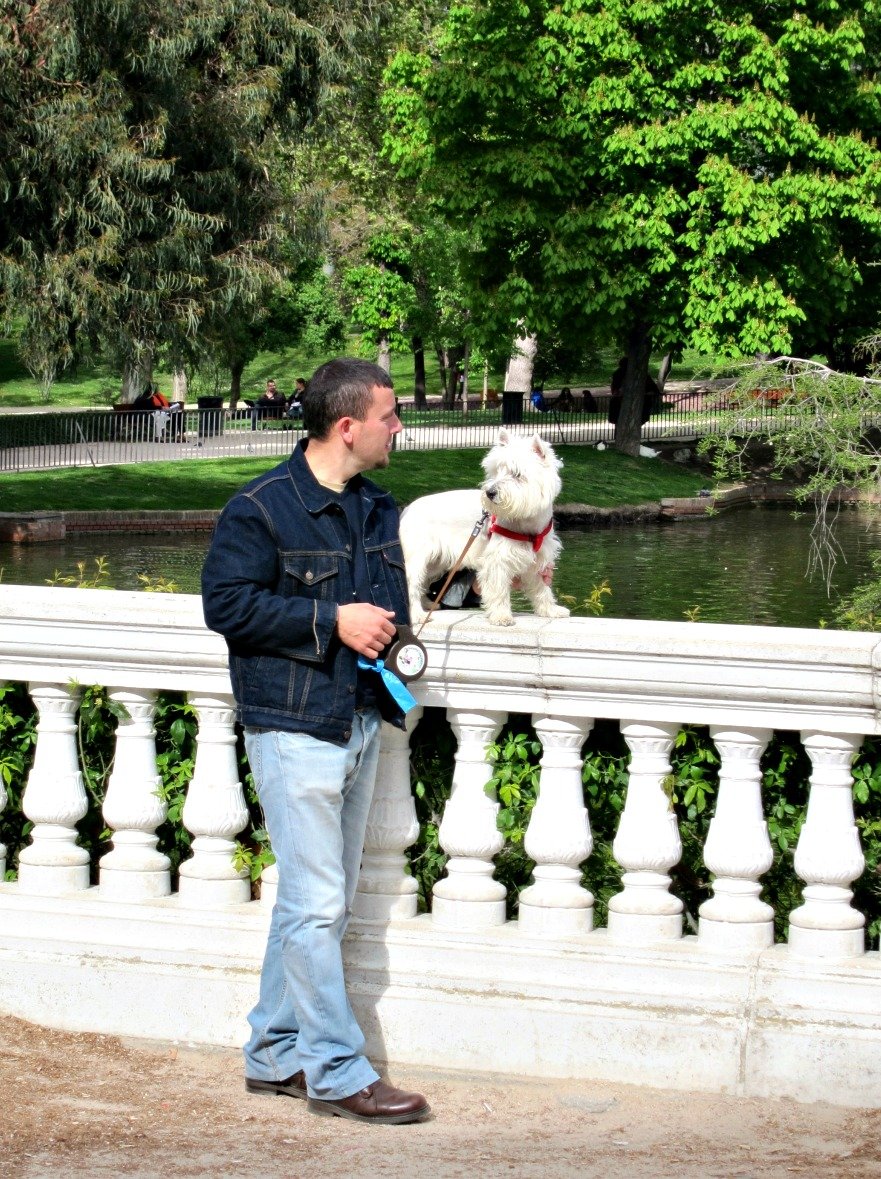 Little boys in navy blue and white sailor outfits were placed beside the pond while doting mamas and papas photographed them.  While I watched that cute scene, a man picked up his little white dog, placed it on the balustrade overlooking the pond and together they posed, gazing into the distance (or maybe at each other) while his wife dutifully snapped away.

The sounds of an ethereal violin floated on the air – I was totally smitten with the Crystal Palace. 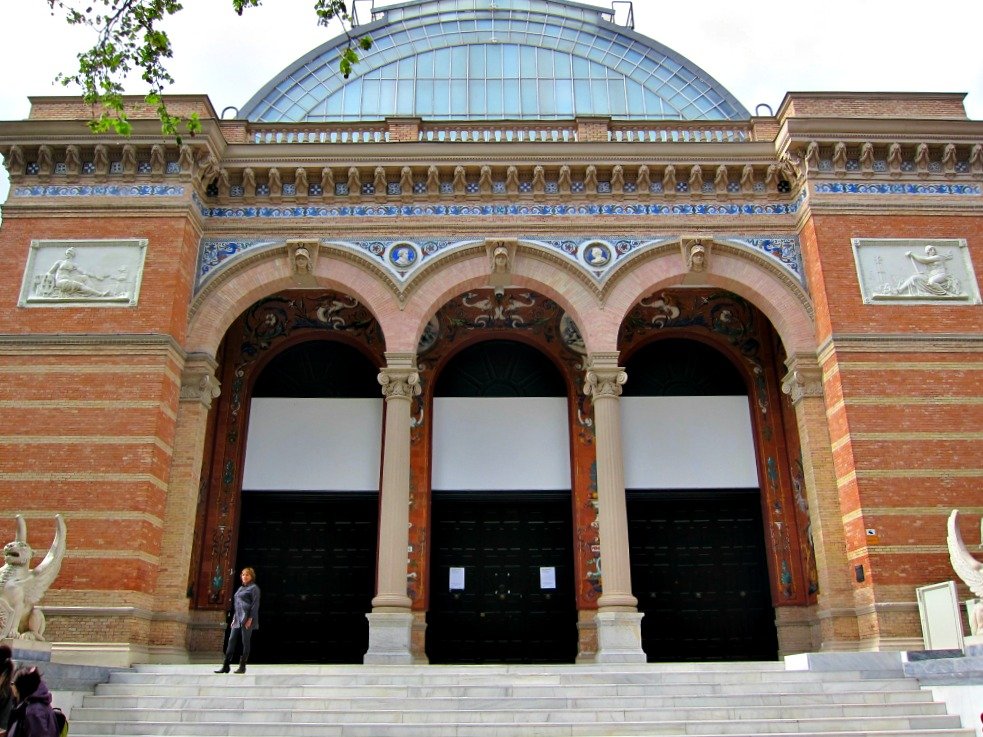 Lying between the large boating pond and the smaller one to the front of the Crystal Palace this building had a more earthly spirit.  Built to house a Mining and Metallurgy exhibition, the two toned brick building with it’s splash of blue tiles, is a venue for temporary exhibits from the Reina Sofia Museum.  However it too was closed that day.

Thankfully the weather did allow us to roam and people watch in the life filled gardens.  Although the layout of the garden was formal, the spring flowers were left to grow in a profusion that made me think more of wild meadows – a delightful effect.

Some fitness devotees donned gloves and boxed amid the flowers, cyclists rode by and everywhere there were children dressed in their best clothes, eating ice-creams or carrying balloons. On week-ends parents and children turn out to enjoy puppet theatre performances.

The chatter and laughter of the rowers spilled over from the pond to mingle with the hum of people relaxing at the outdoor bars.

Madrid seems fascinated by human statues.  They congregate in the plazas, on footpaths, around the fountains and of course in Retiro Park. 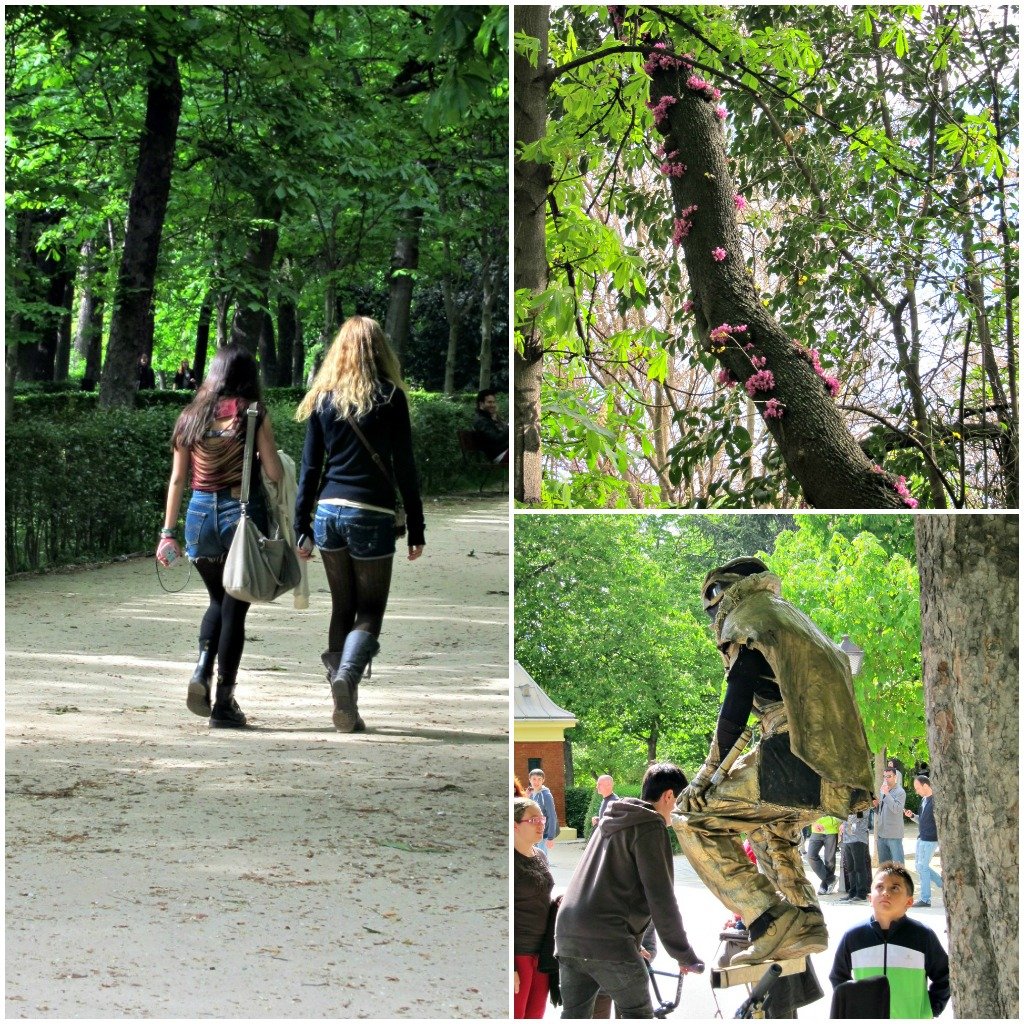 We left the park on foot, passing a snaking line of tourists waiting their turn to view a selection of the more than 9000 paintings owned by the nearby Prado Museum.

I was happy that we were planning to spend our remaining time in Madrid, enjoying some well earned drinks and absorbing the people culture of one of my favourite places, the Plaza del Angels.

If the weather is fine Retiro Park is the perfect budget travel experience.  Entrance is free.

Allow a couple of hours.

In Summer there are free concerts in the park and children’s shows.

Boat Hire approx. 6 Euro for 45 minutes – you could even take a picnic on board.

Retiro is easy to visit.  It is close to other places of interest, namely, Fountains Neptuno and Cibeles, Reina Sofia, Prado, Puerta de Alcala.

Visit TRAVEL PHOTO THURSDAY AT BUDGET TRAVELERS SANDBOX  for travel photos from around the world.