The Alhambra, a UNESCO World Heritage Site is a must see in Granada Spain and this post explains how to visit Alhambra and how to buy tickets for Alhambra.

Having waited for this moment for months, I was super excited, even nervous approaching the gates of La Alhambra. If we knew back then what we know now, we would definitely buy tickets for Alhambra on line with Get Your Guide and save ourselves a lot of uncertainty.

Busy times like the Winter holiday period and Easter require booking up to 3 months in advance and this was indeed what we had to do. There are strictly adhered to times for visit to the palaces and they are clearly shown on your ticket.

Buy your Alhambra Tickets here through Get Your Guide.

Confusion and Chaos at the Main Entrance Alhambra 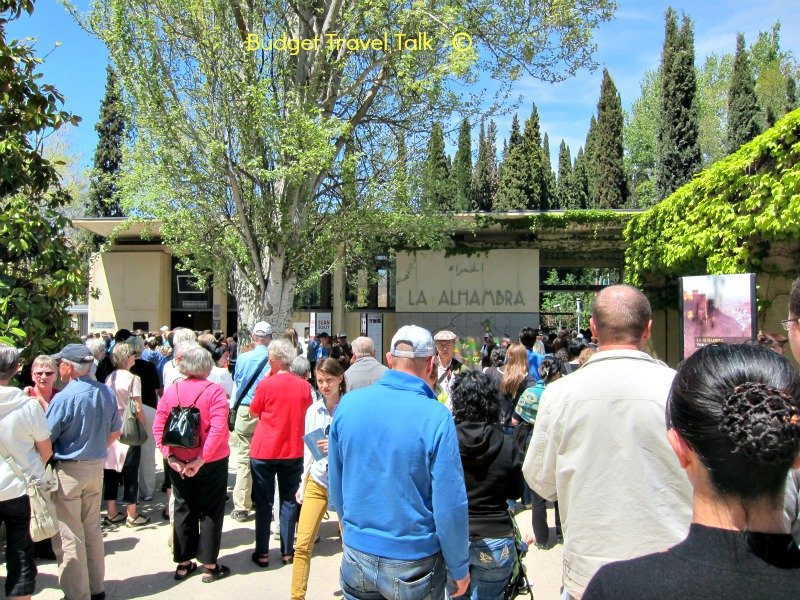 If you are not sure about buying tickets on line with Get Your Guide, I’ve compiled an easy 4 Step Guide to help you.

Where are you going? Alhambra Granada

Change to Currency you wish to use – I chose AUD$

Add the Date you want to visit – I chose Jun 30th.

If no tours are available for that date, try your next choice and so on.

I like the First Tour – Granada: Alhambra Ticket and Guided Tour with Nasrid Palaces.

This Tour is a GYG Originals Tour, which means amongst other things:

Click on and read about Free Cancellation and Covid 19 Safety (Bring and Wear Mask). 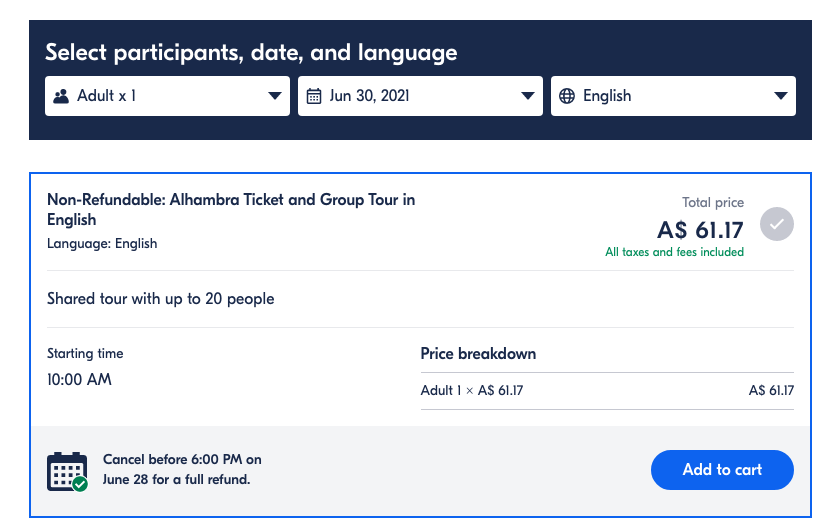 “….overlooking Granada, Spain. Built by Moorish Kings in the 12th and 13th centuries.  The Alhambra is the finest example of Moorish architecture in Spain” as defined by Wikipedia. 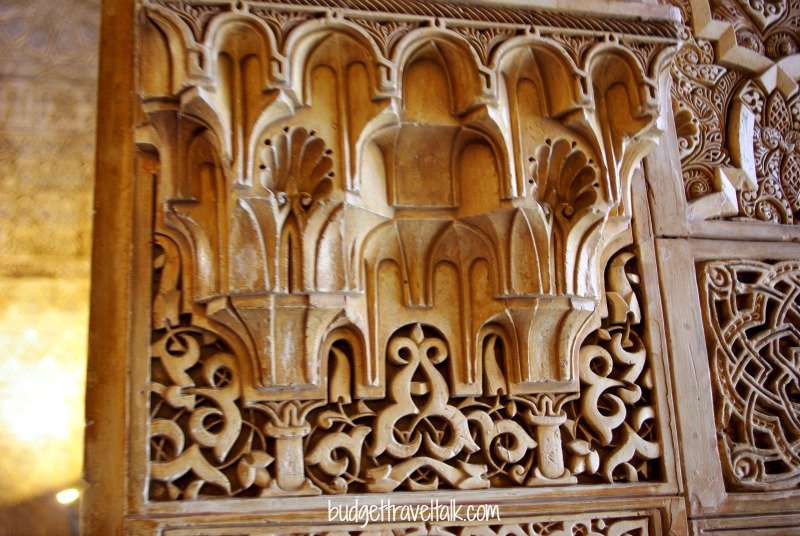 Why exactly is Alhambra a must see in Granada?

In 2007, the Alhambra beat over 9000 candidates to become one of so-called Twelve Treasures of Spain.

It is one of two top monuments visited in Spain, the other being Sagrada Familia in Barcelona. Barcelona receives far more incidental visitors than Granada.

However, they are both stunning monuments and cannot be compared. Definitely see both if you can.

The Views from the Alhambra of the City, Albaycin and the Sierra Nevada Mountains are stunning.

To see beautiful original tile work and intricate plasterwork carvings from the 14th Century, together with the water channels and pools so necessary in the every day life of the Moors.

Close up of hand carving seen throughout the Nasrid Palaces at the Alhambra. 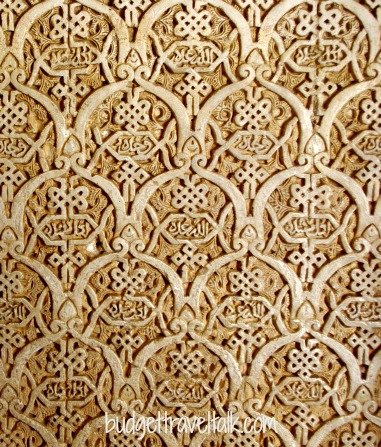 The Moors or Berbers reigned the Iberian Peninsula for 800 years and the palaces are a monument to the influence they had on Medieval Europe’s art and culture.

There are no treasures displayed on the walls – the amazing walls themselves are the treasure.

While Sagrada Familia is a Roman Catholic Cathedral, the Alhambra is an Islamic (Moorish) Palace and totally unlike other palaces in Europe.

The Alhambra Spain, is a little slice of Northern Africa in Europe, which is a compelling reason to visit.

The Nasrid Palaces Alhambra are the most sought after attraction in the Alhambra, consisting of twenty-four halls, courts and gardens.

Apart from the Nasrid Palaces the Alhambra comprises the Alcazabar (fortress) and the Generalife (water garden) which are covered in future posts.

The founder of the 800 year old Nasrid dynasty in Spain, Alhama commenced building the palaces in the thirteenth century, but what you see today, dates from the fourteenth century.

Where are the Nasrid Palaces?

The Nasrid Palaces are contained within the Alhambra fortress or citadel, perched atop al-Sabika hill, above the banks of the Darro river, smack bang in the middle of Granada.

Looking up to see flags flying on the La Alhambra while strolling beside the Cafes and Shops on beside the Darro River is enticing. 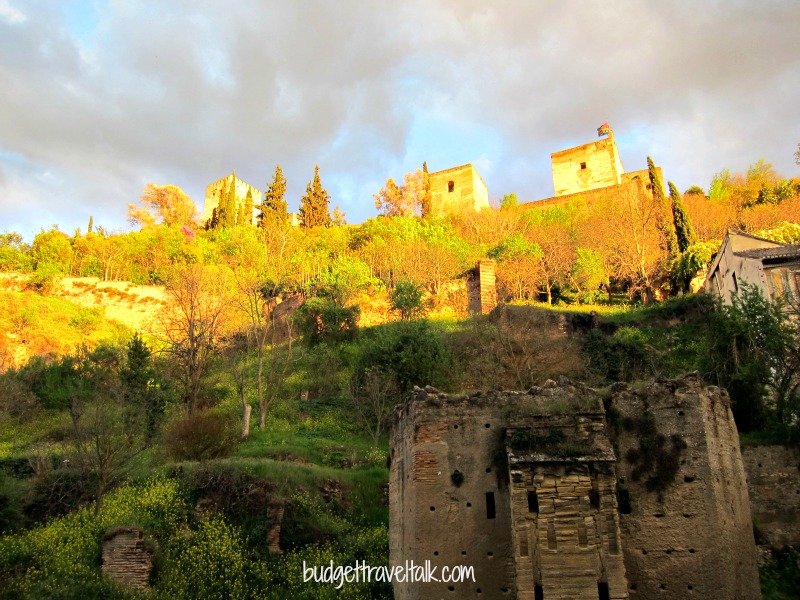 Things to See in the Nasrid Palaces

Carved features on the ceiling above supporting posts in the Mexuar 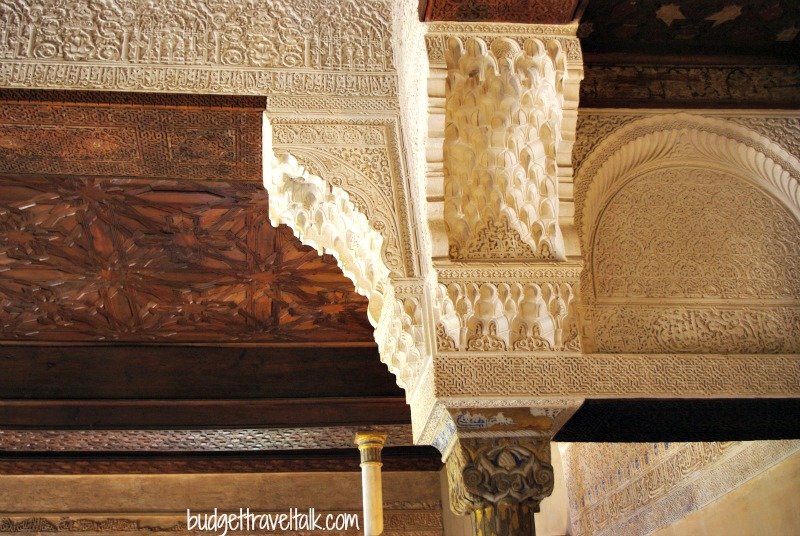 The Sultan and his advisors sat in the Mexuar which then as now was a public reception hall. It was where the people from the valley below came to seek an audience to air grievances.

Not meant for Royalty, it was quite a plain room originally. In the 16th/17th Century it was altered to house architects building the first renaissance building outside of Italy – the Palace of Carlos Quinto.

Although the Mexuar building today doesn’t reflect it’s original purpose it is quite fascinating.

Looking up to Ballustrade Mexuar Alhambra 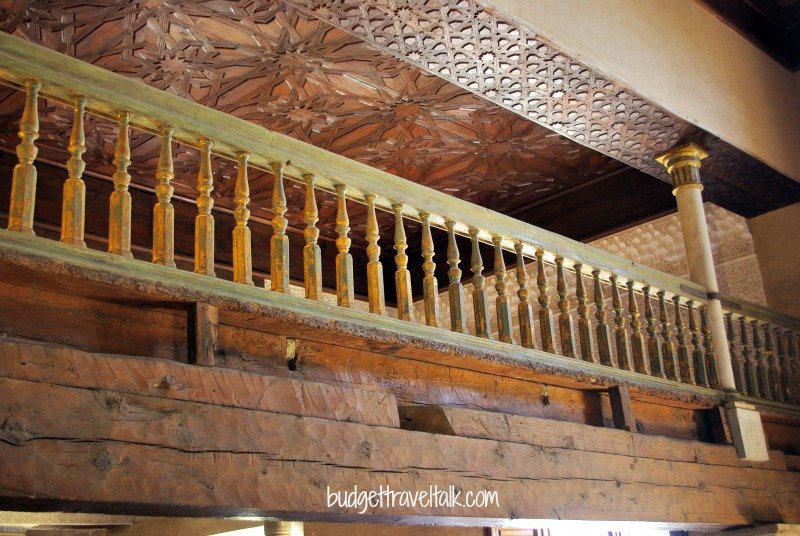 The entrance to the Nasrid Palaces are through the Mexuar and the Oratory (behind the Mexuar). An historical place of worship, the Oratory was rebuilt in 1917 after an explosion from the Darro Valley in 1590 majorly damaged it.

Yusuf I destroyed the existing palace buildings leaving only the Mexuar. Mohammed V came along and improved the Baths, The Court of the Myrtles and Comares Tower, connecting them to the Mexuar while adding the Palace of the Lions.

Comares tower is the tallest in the Alhambra and houses the Hall of Ambassadors and Hall of Boats. The magestic Hall of Ambassadors is where the Throne was. It’s walls are covered in poems praising God, or the Muslim Emir (governor) with written texts from the Koran.

Interestingly Comares Tower is said to be where Christopher Columbus was given permission from the Catholic Monarchs to undertake his Indies Expeditions.

This beauty is seen at it’s best in The Palace of the Lions and Mohammed V is the one responsible. He took over where his father Yusuf I left off, building the royual residence known as the Palace of the Lions. He positioned it adjoining the Baths and the Court of the Myrtles.

Inevitable crowds do not detract from the beauty of these rooms.  Look up away from the crowds and let your imagination soar.

Water trickles in channels, provides reflections in ponds, and sprays from the fountains throughout the whole complex, representing purity of soul.

Channelled from the Darro River below and water was necessary for sustaining life and valued for the pleasure it gave these people from the desert lands of Northern Africa.

The Court of the Lions

The Fountain of the Lions was returned after cleaning just in time for our visit. Although the whole area was yet to start working again we were thankful to be able to see them in all their brilliance.

The fountain consists of a central basin supported by 12 white marble lions whose mouths form the water jets of the fountain. 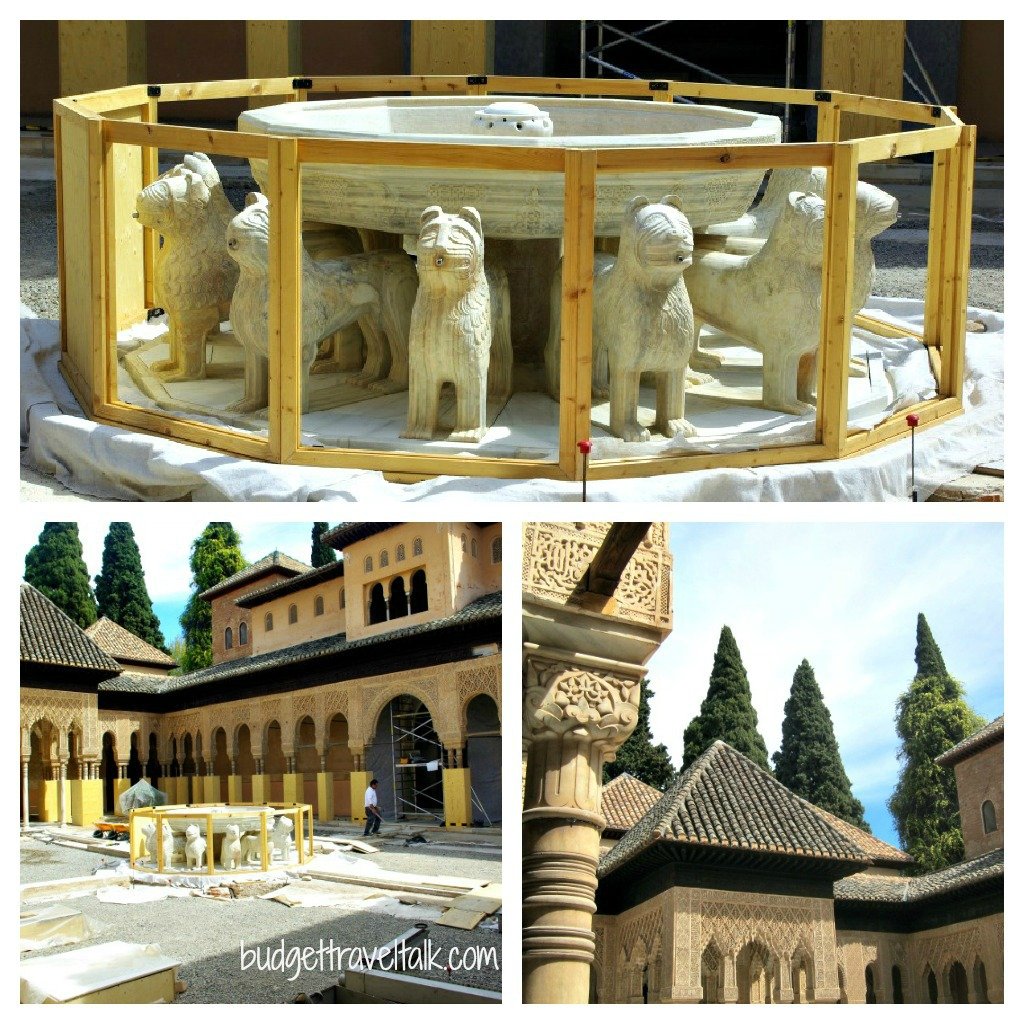 How are the Alhambra Carvings Done?

The craftsman applies a gypsum based mortar to the surface carving his individual designs while the mortar is still wet.

A variety of craftsmen were used. 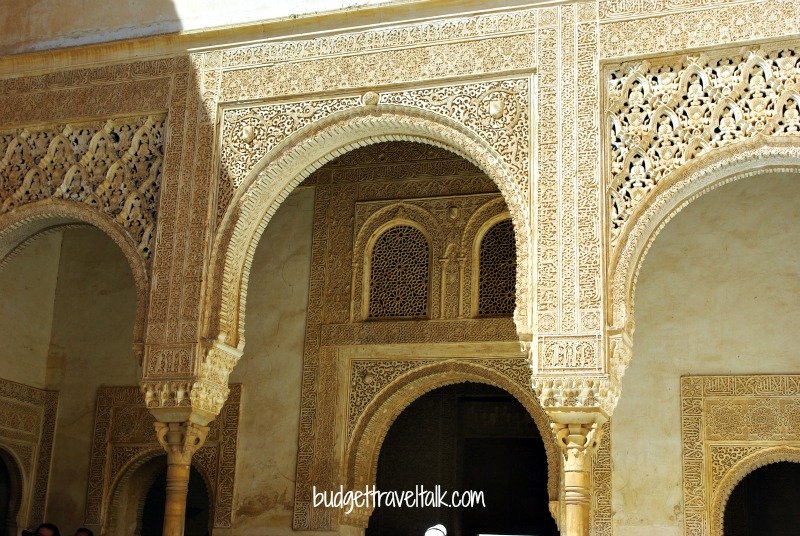 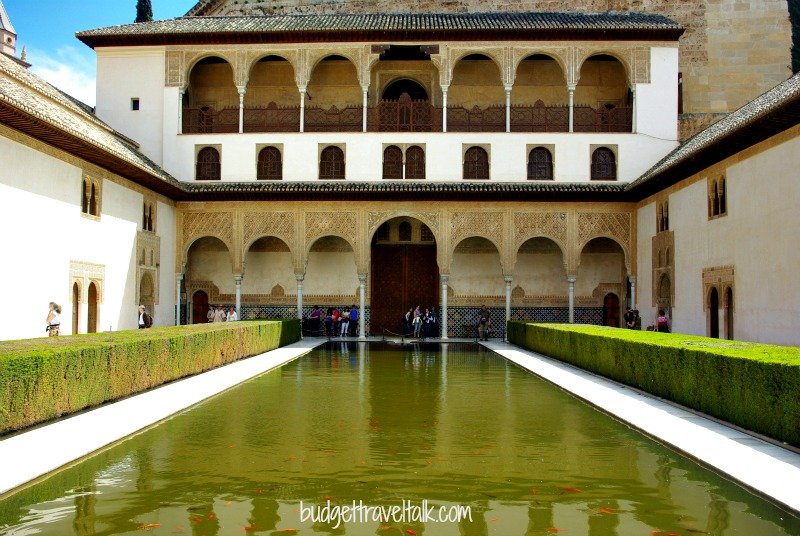 Large gold fish inhabit the pond in the 34 metre long Patio of the Myrtles.  The Myrtles that line the pond lend their name to the Patio which lies west of the Patio of the Lions. Can you imagine the beautiful scent when the bushes flower?

Notice the marble slabs paving of the Court below. 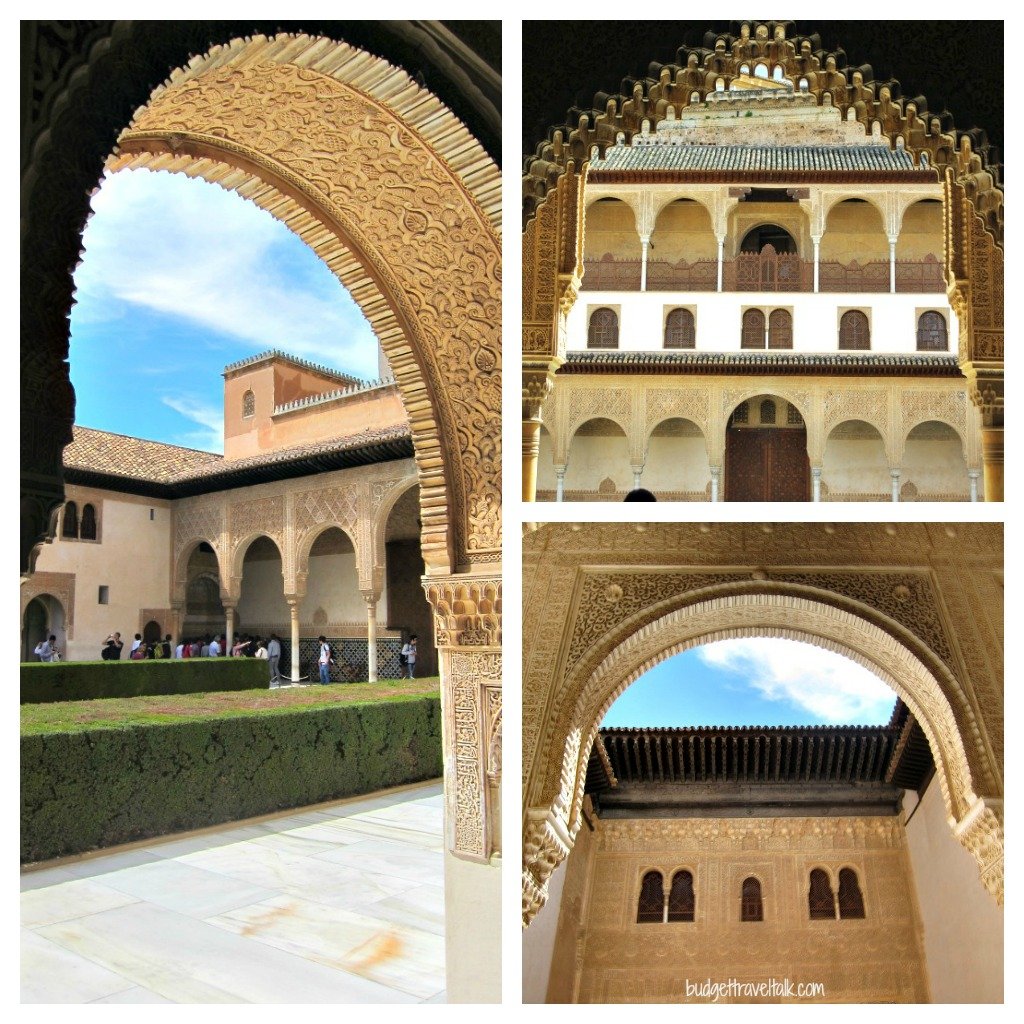 Hall of the Two Sisters

Is the Hall of the Two Sisters named after two princesses?

No – the two sisters are in fact twin marble flagstones that make up the floor.

Water from the Fountain of the Lions flows into the Hall via an exposed channel.

The elaborate walls and ceiling of the hall are incredible.  Notice how the high windows flood light onto the flower like carving. 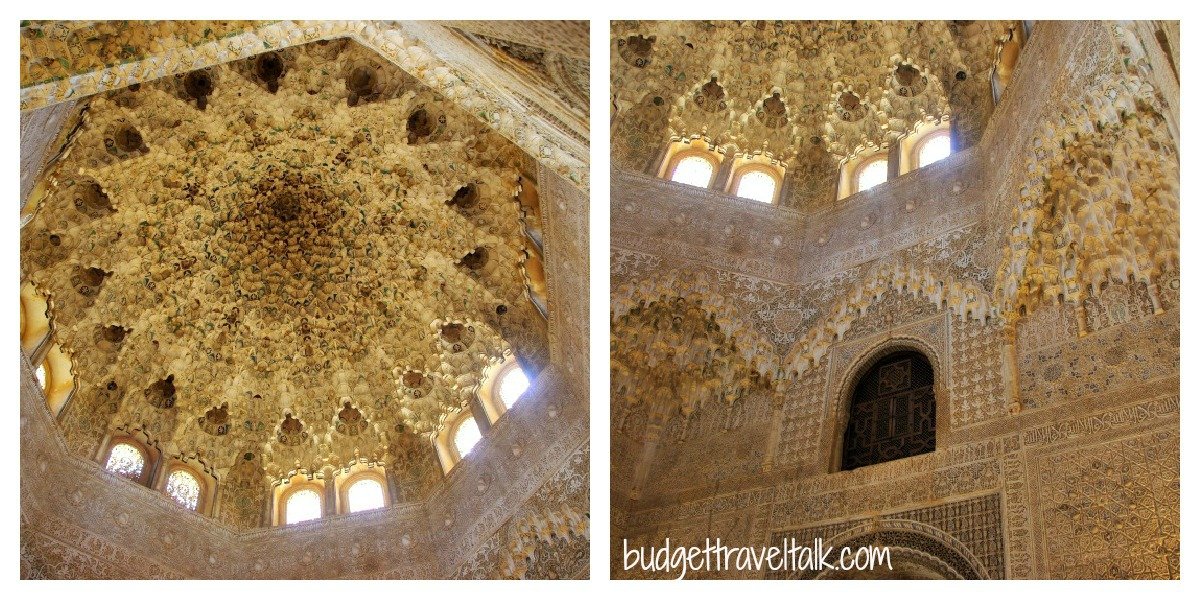 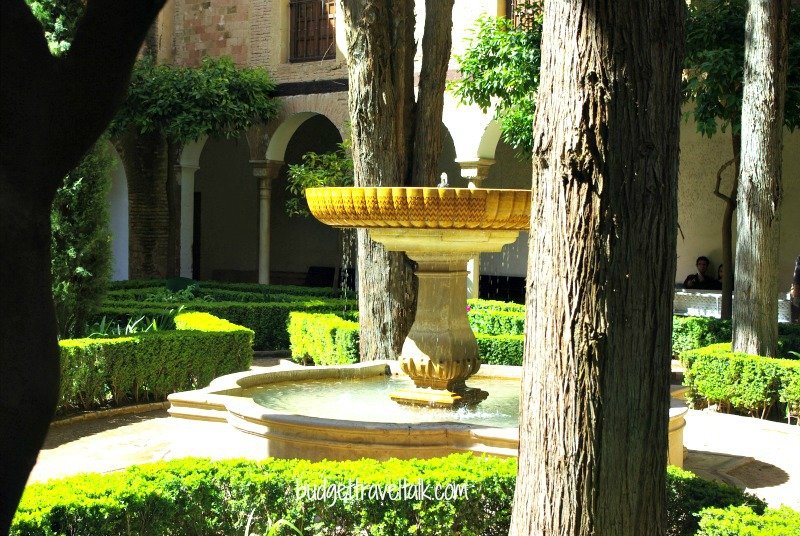 This garden also known as the Garden of the Orange Trees and Garden of the Marbles, is north of Daraxa’s Mirador (viewpoint) and the Hall of the Two Sisters.

I am a lover of Cloisters and although this is definitely not one, it does look remarkably like one with it’s arcaded galleries on the ground floor. They were made from bits and pieces found around the Alhambra. The garden still has Orange Trees, Box Bushes trimmed into hedges and tall Cypress and Acacia trees.

And look at that beautiful big centrepiece basin in the marble fountain. Having a central fountain within a walled Courtyard is so Moroccan in character.

Things to know about visiting the Alhambra

The palaces are 800 metres from the ticket office. If you don’t have a guide take this into consideration. The half hour time slot for viewing the Nasrid Palaces, is allocated on your ticket, and is strictly adhered to.

The Alcabazar fortress or citadel is a once only entry and if you try to enter too close to the time of your Nasrid Palace time slot, the attendant will suggest you visit it after your palace visit so you will not be rushed. Your guide they will advise you.

Night sessions are also available see opening hours.  Night time tickets are for 1.5 hours only from 8 p.m. or 10 p.m. depending on season, and are only for the Palaces or the Generalife, not both.  Many people do this as an extra to their day time experience, as the lighting adds another perspective.

Must Bring Your Actual Passport or Photo ID Card on the Day, not a copy on your phone.

Granada is one of my favourite places in the world and we adored the Albaicyn, Tapas, and the cooling Sierra Nevada breezes, but there is no doubt that La Alhambra is the jewel in Granada’s crown.