Before leaving Artvin we stood in the breakfast room of the Mersivan Otel looking across to the mountains and down to the now tamed Coruh River.  This was the same river we had followed through Ispir and Yusufeli at the start of our Eastern Turkey Road Trip and here we stood on Day 7 with Yusufeli only 80km to the south.  The Coruh would eventually finds it’s way through gorges to the Black Sea near Batumi in Georgia some 430 km from it’s source. Although the dammed water was easy to see, the underground turbines were hidden and it was hard for me to get my head around the extent of each dam.

Artvin Dam lay beneath us, Densilar Dam only 5km East and there was at least one other back near Yusufeli, but all up there were 11 (yes eleven) planned for the Coruh River.  As one of the fastest flowing rivers of the world it was known as a world class whitewater rafting and eco-tourism destination.  It is hard to see how it still can be. 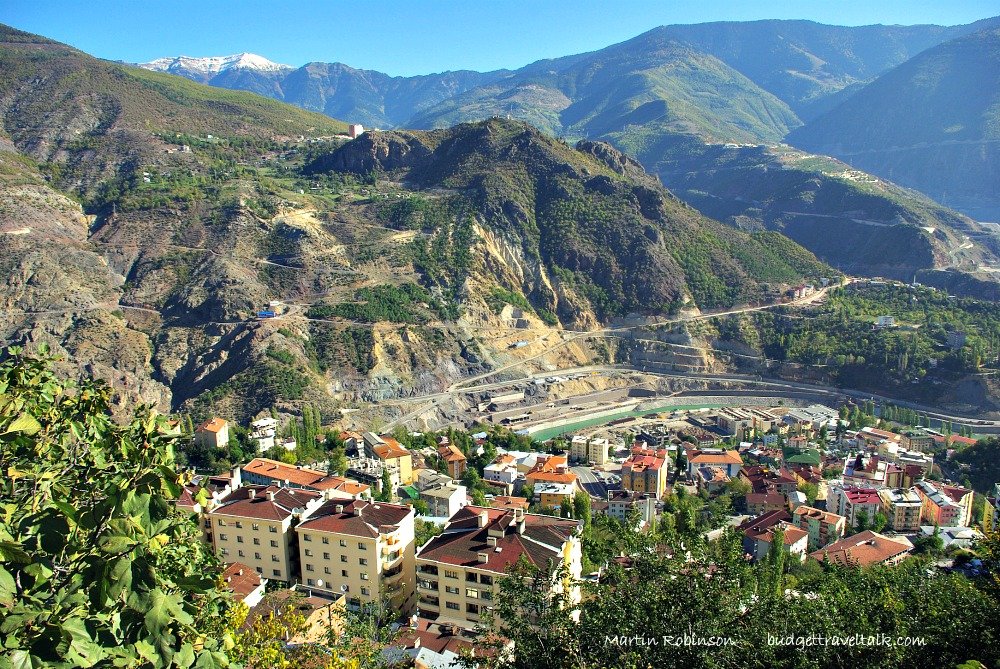 Driving through a surprise snow fall as we passed over the Kackar Mountains on the first day of this trip had made me fearful of our return Kackar crossing, but I needn’t have worried.  We didn’t seem to climb any higher than we already were and a snowstorm didn’t even look like a possibility.  After admiring vivid green slopes that dissolved into the muted blues of the not too distant Black Sea, we sailed down the switchbacks onto the D010 and within two hours of leaving Artvin we were looking for a park in Arhavi. 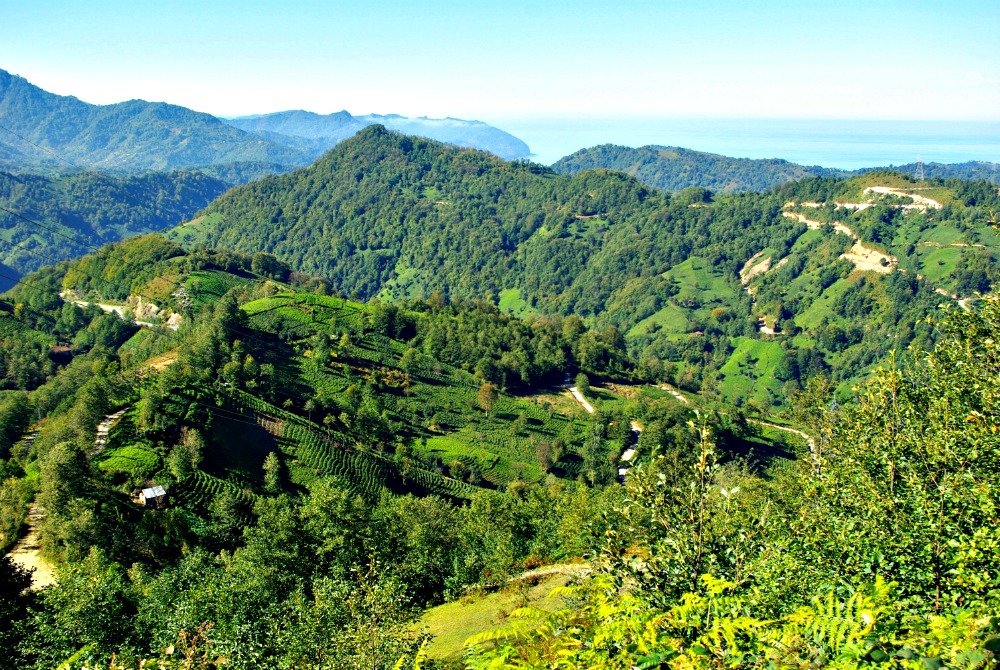 Back on the D010 coastal road enroute to Arhavi. 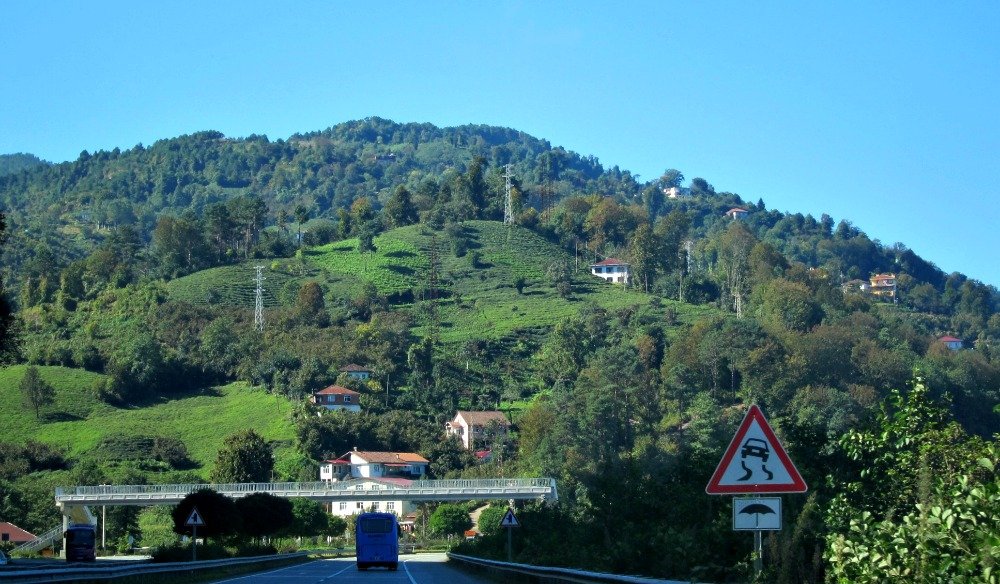 A glossy brochure picked up in Trabzon showed twin 18th Century arched bridges at Arhavi and we wanted to find them.  Parking at the less busy end of town we went looking for directions.  An old gent’s eyes lit up with recognition at our photo, smilingly pointing toward the river and inland.  We thought there may have been a tourist office down at the busy end of town, but our autopilots found us Tea and Cake instead. Finding an outside table we settled in for some people watching while we waited. 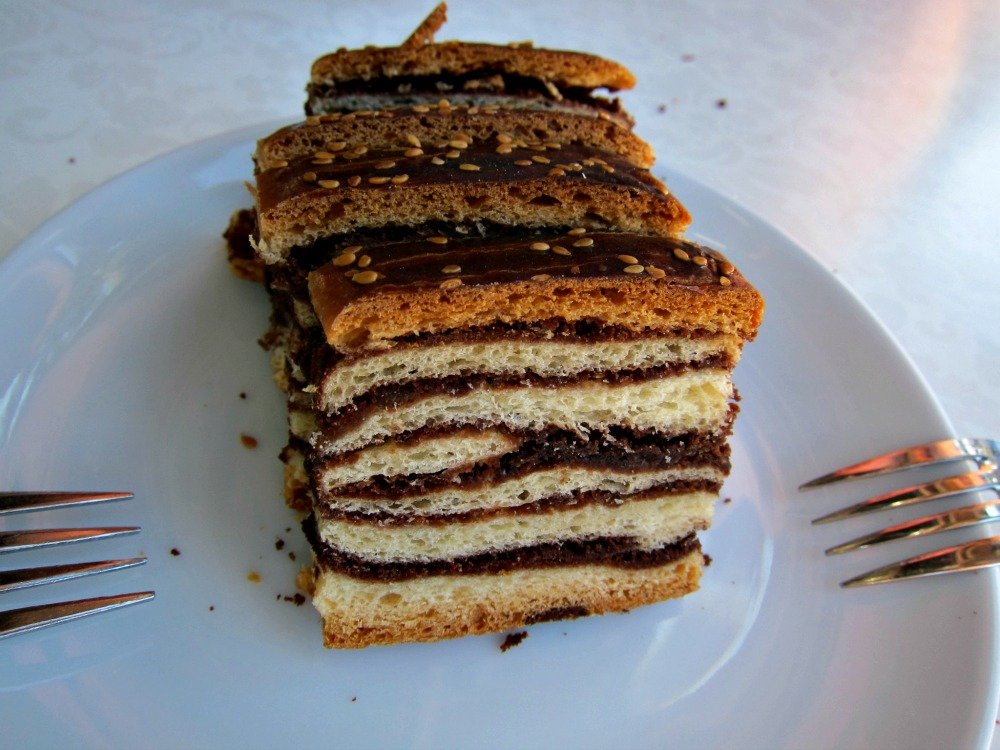 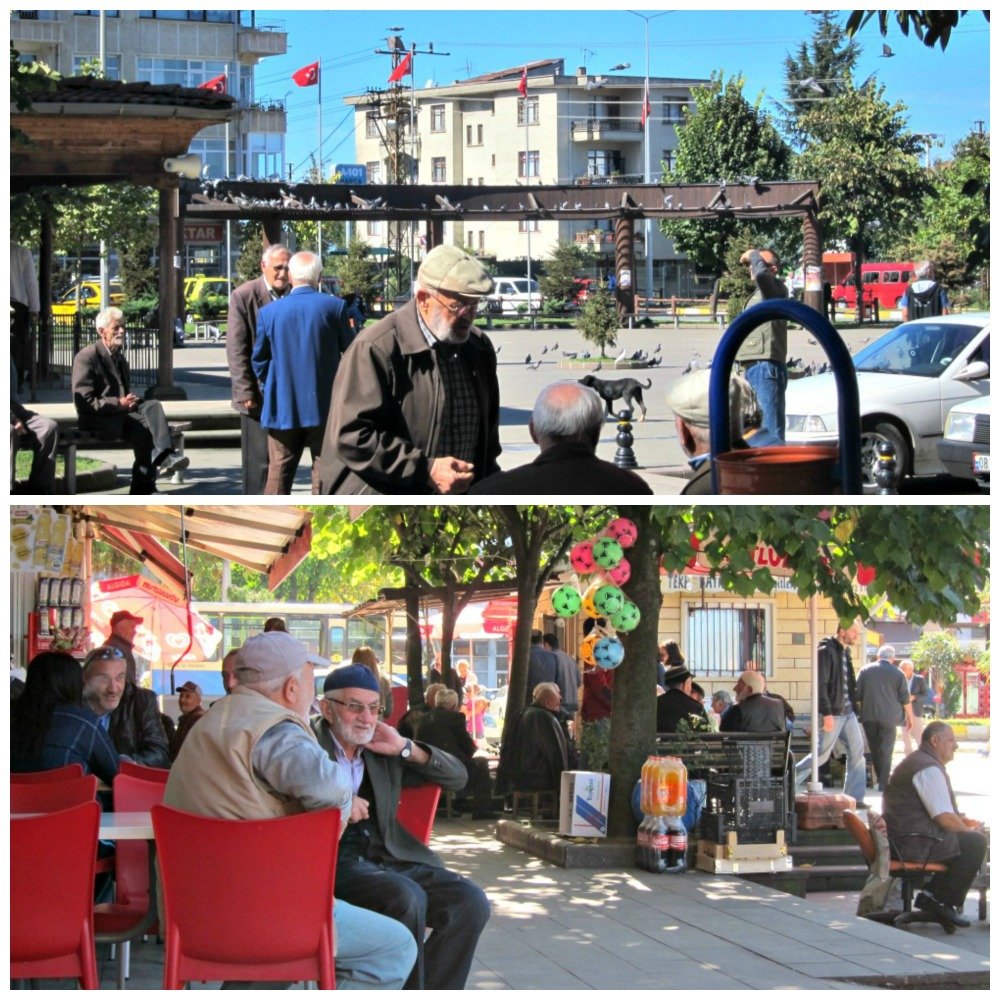 The majority of people in the towns of Pazar, Findikli, Ardesen and Arhavi are of Laz heritage.  Originally they were Christians from Caucasia in neighboring Georgia, but those living in Turkey today converted to Sunni Islam in the 16th Century.

A row of men sat on low seats washing their feet prior to entering the mosque while others caught up on gossip between the foraging pigeons and comatose dogs.  Turkish dogs have an enviable ability to sleep anywhere but another more concerning trait out East was their predilection for standing in the middle of country roads. 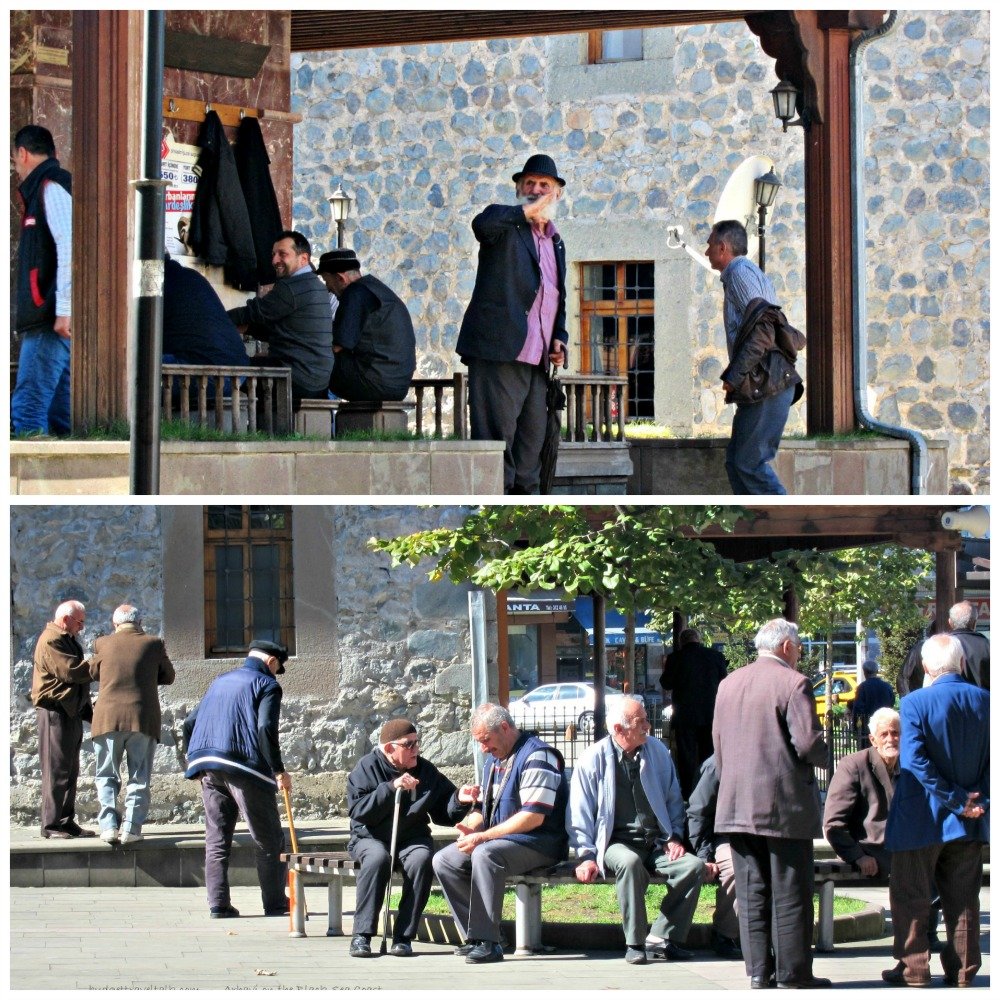 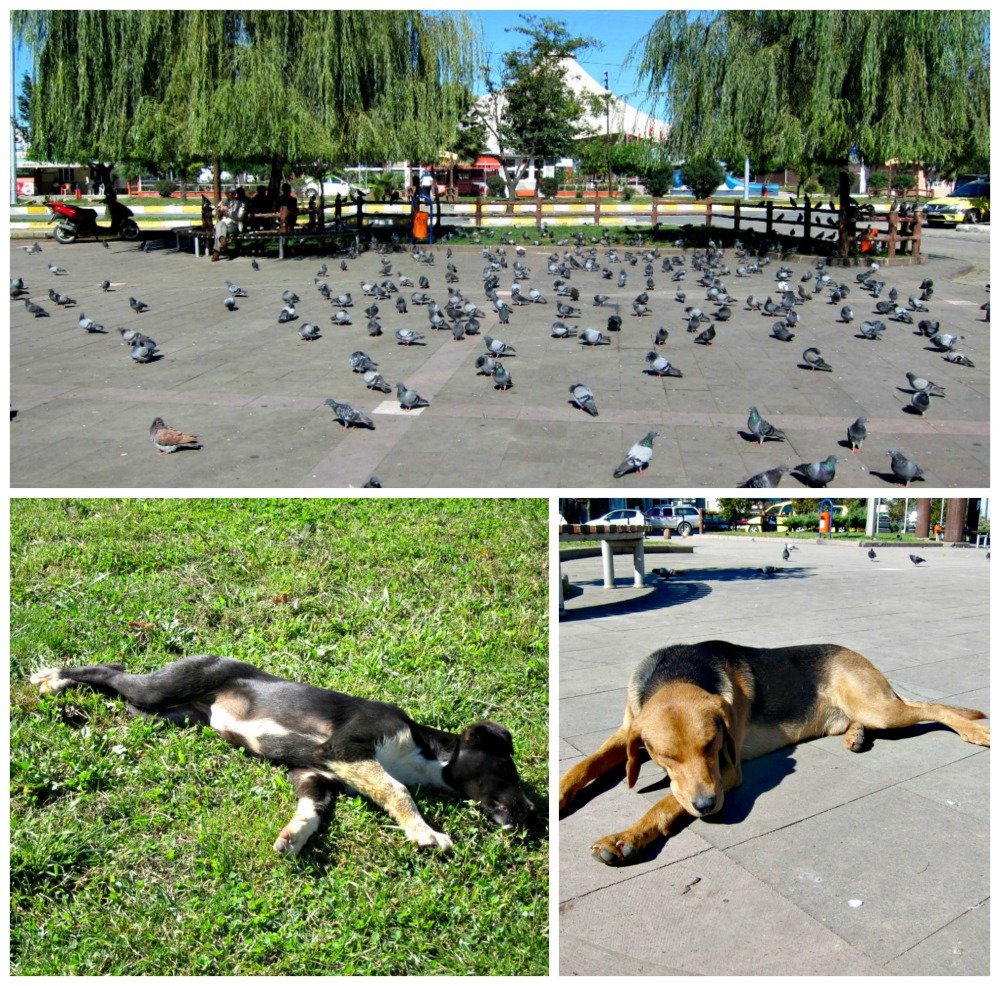 The waiter’s  twin bridge directions agreed with the old mans, so we set off on a track beside the river.  An old lady cowherd eyeballed us from her riverside rock and was clearly as startled as the four foxes who darted ghostlike into the nearest field of tea.  When the track eventually petered out we veered left onto bitumen where a farmer pointed us a further 7km upstream.  After 10km we admitted defeat, crossed the river and returned to the D010. The destination had proven elusive but it’s sometimes about the journey.  Right? 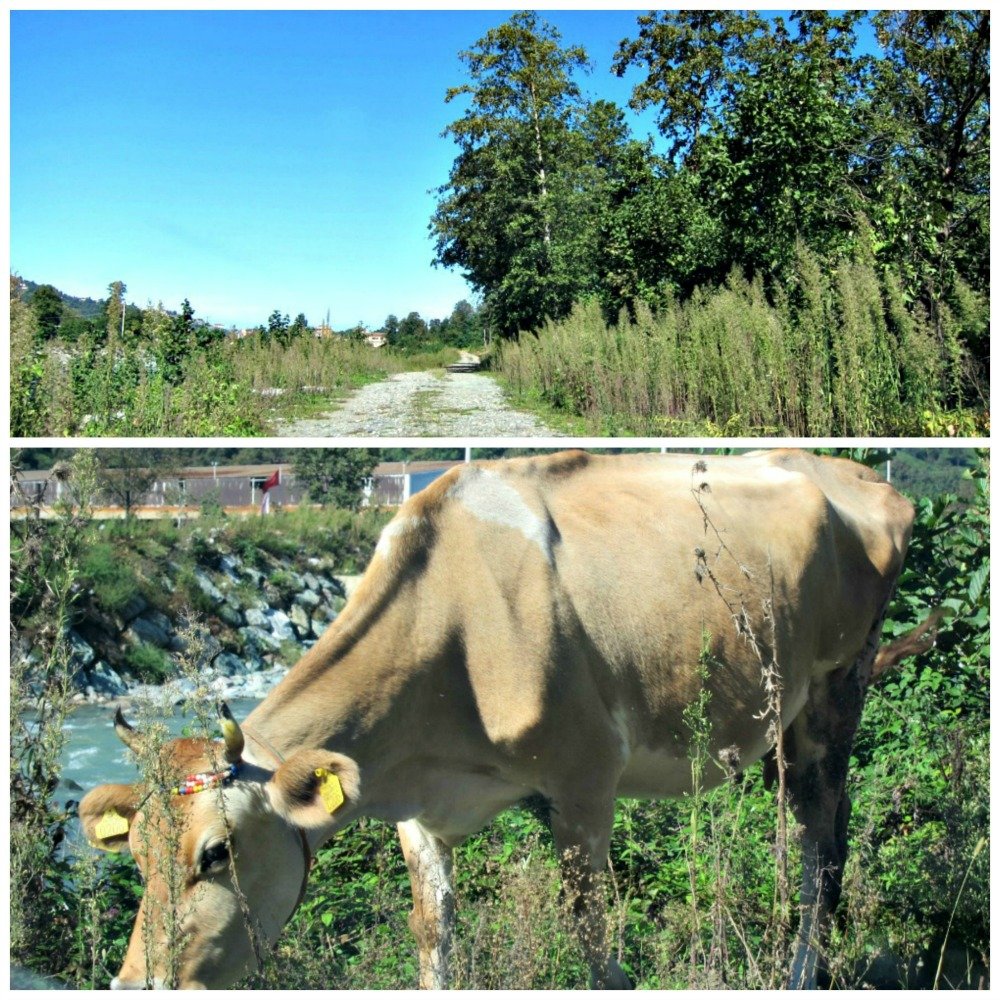 Hawking is majorly important in the land of Laz, and near Ardesen this impressive Sparrowhawk statue marks the turn-off to Camlihensen and the Firtina Valley.  If the sameness of the coastal road is doing nothing for you turn at the Sparrowhawk. 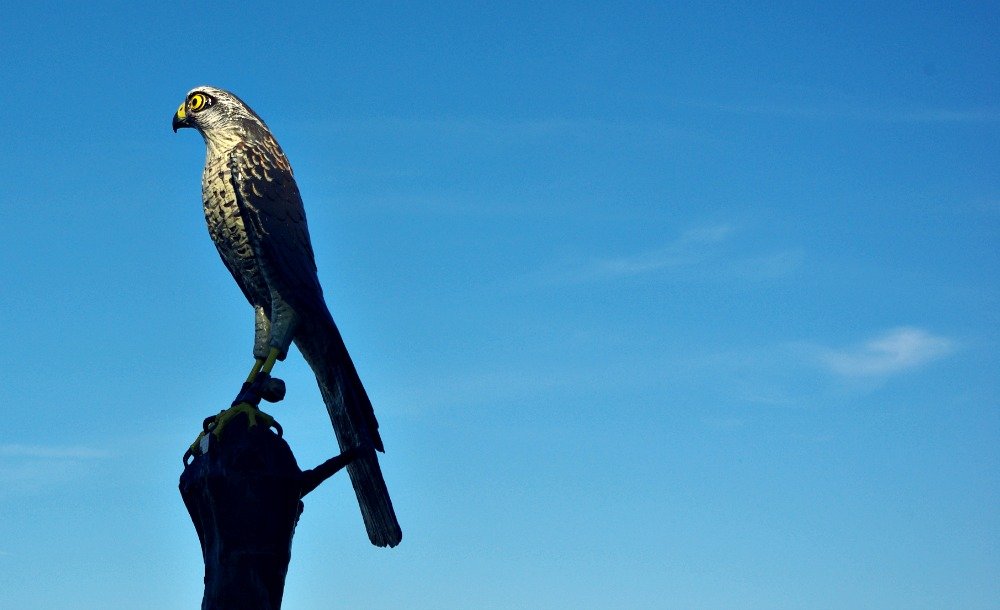 If you turn left over the bridge just after Camlihemsin you will reach the Hemsin  Ayder Plateau, an area for serious hikers, but if you go straight ahead from Camlihemsin you will drive into a more traditional Hemsin area (think winch wires to remote houses and hilltop mansions).  While the Laz come from across the border Hemsin people are named after this district of Turkey.

With the news of dams on the Coruh River causing concern for rafters, the Firtina Valley stepped into the ring and white water rafting companies have opened up shop.  Head there for beautiful scenery any time and the best water in July and August.  Rafting tours are geared toward all levels of rafters with some providing ziplining.

So while Laz people populated the coastal areas and Hemsin the High Country, the one street town of Camlihemsin, squeezed between river and hills, was a mixture of both cultures.  Locals numbering 2,500, earn a living from tourism, bees, forestry, tea growing and herding animals on the hills.

Stock at the local hardware store usually reflects the pursuits of locals. 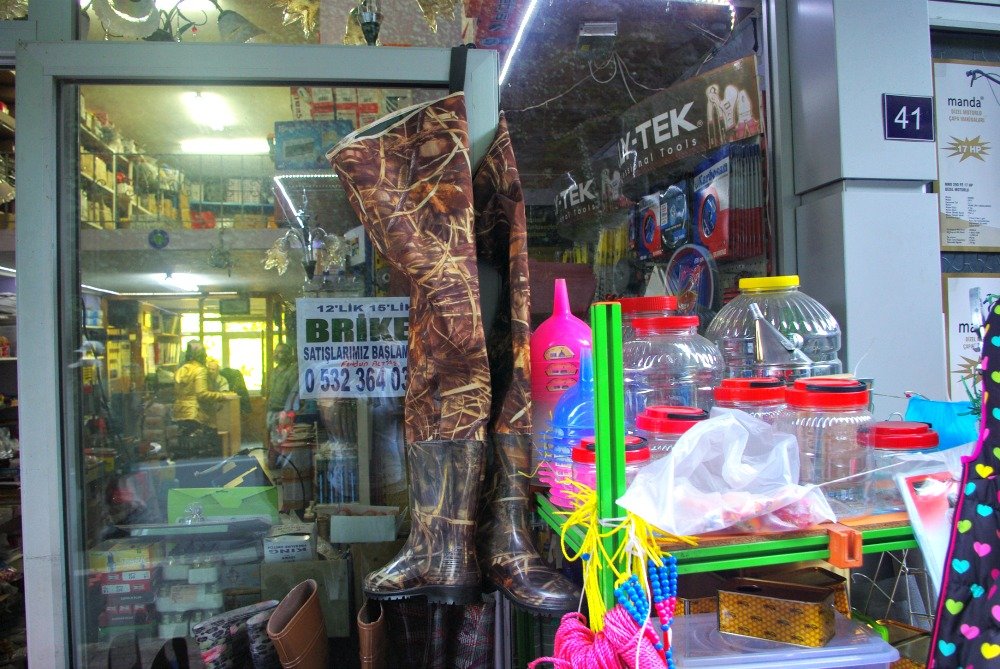 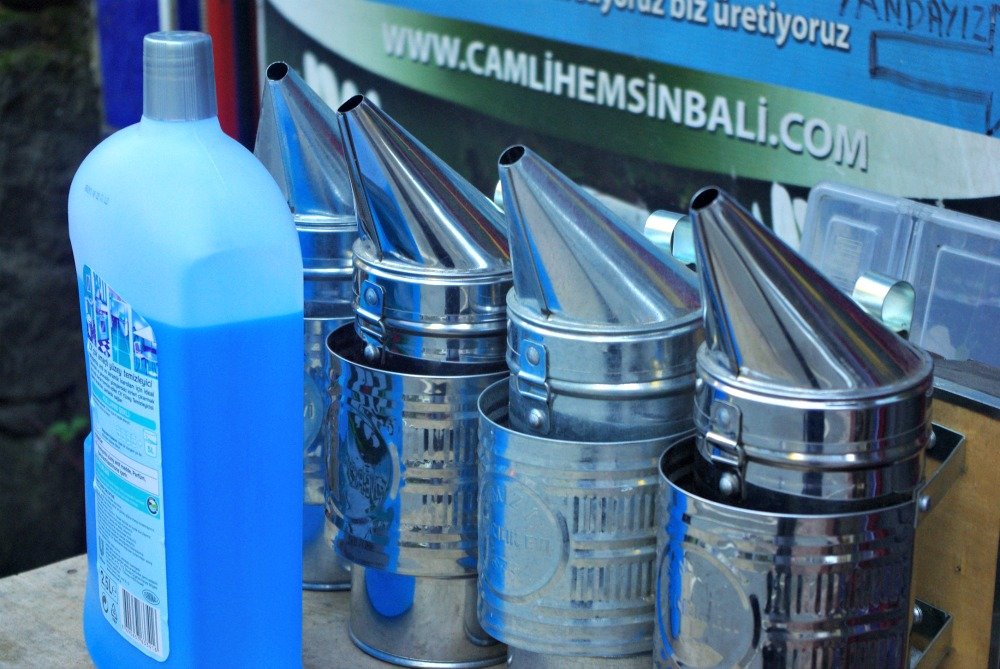 I have more to show and tell about Camlihemsin, so stay tuned for a separate post.

Near the Sparrowhawk Statue we came across a goat market squished beside the road with cars and people all over the place.  With no room to park and the traffic conditions not allowing us to stop on the road, my photos were a blur.  I know I have shown you lots of cows and sheep on this road trip, but goats are my favourite animal.  I can tell you that some of those goats had horns that grew out wide instead of up – a pretty amazing sight. 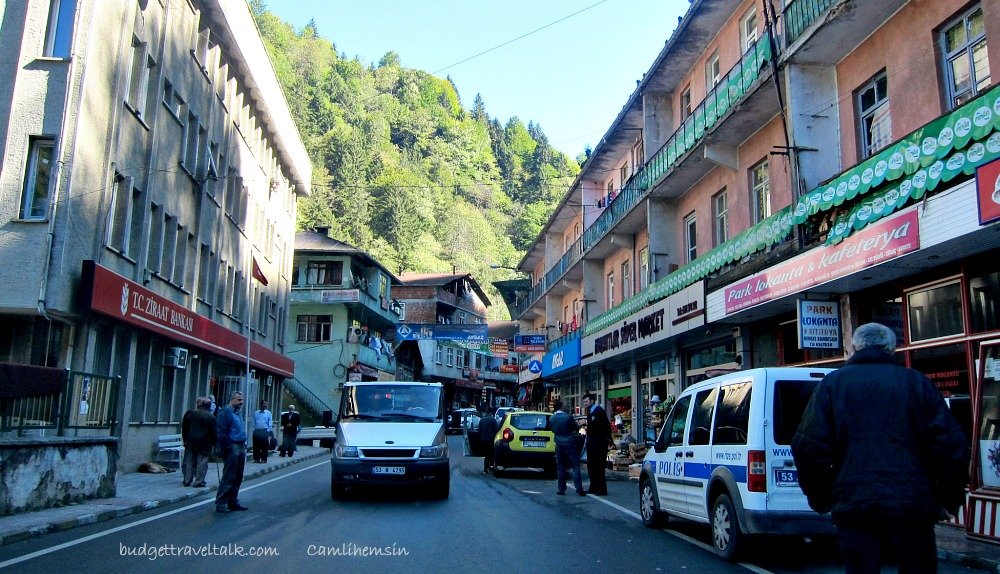 Driving up the valley toward Camlihemsin. 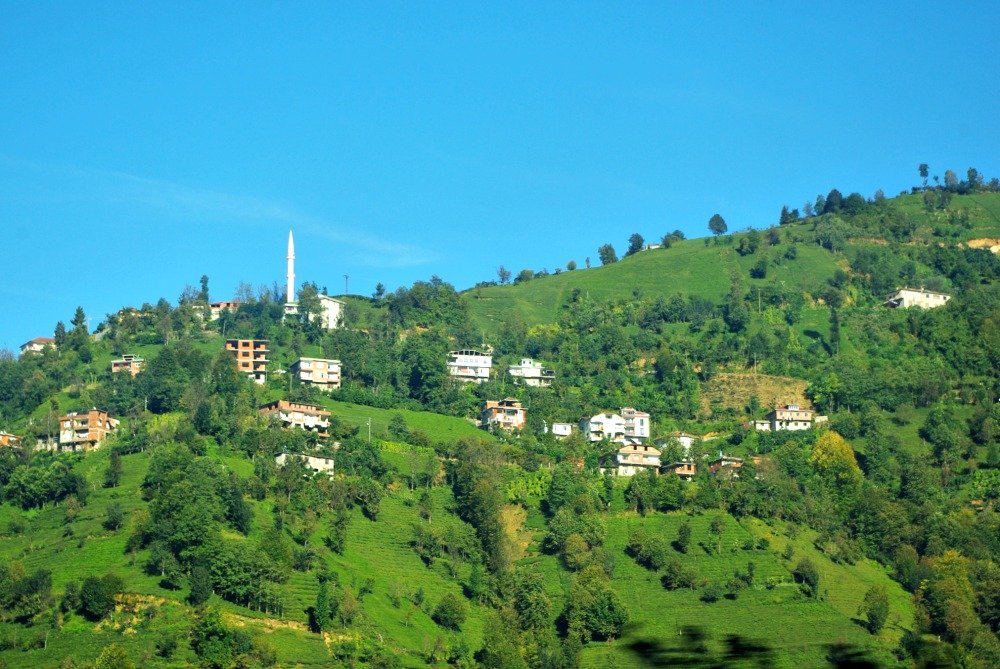 Twin bridges eluded us at Arhavi but on the way to Camlihemsin we easily found Single Humpbacks like the one below. 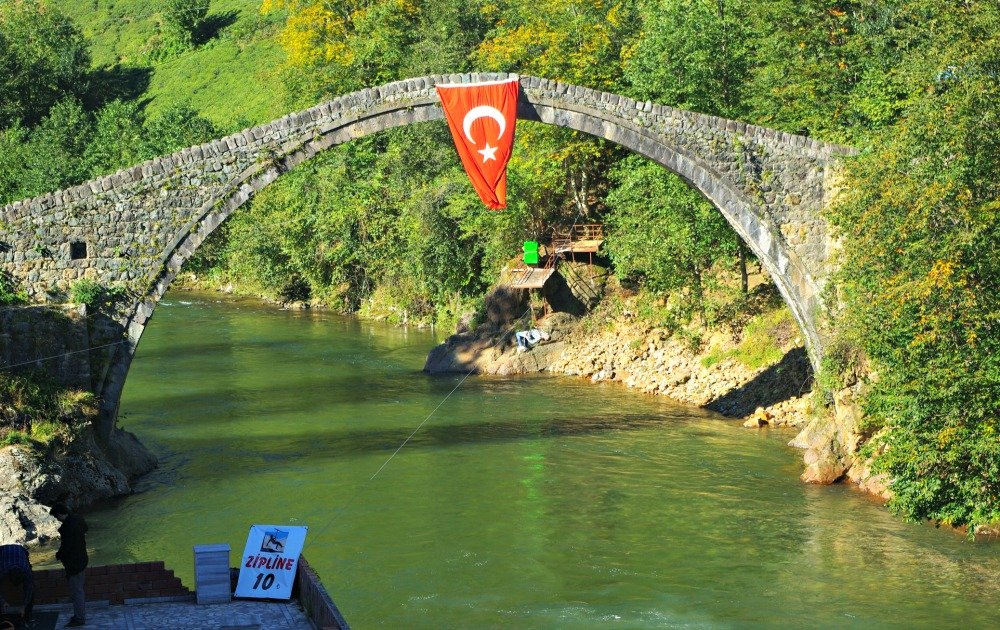 The Firtina Valley has over twenty 18th and 19th Century Ottoman bridges.  The one we stopped at between the Coast and Camlihemsin had a Tesisleri (cafe) attached.  The perfect place to sip Cay and check out the antics of the zipliners. 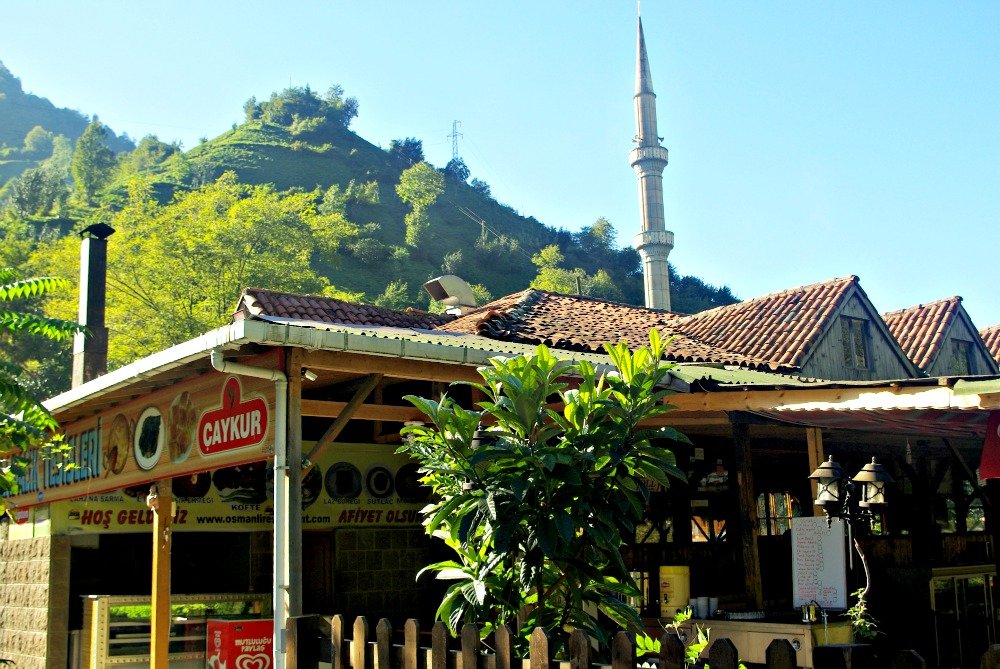 Taking photos from the car (my speciality) was extremely frustrating along the Black Sea coast – the railings and concrete edges took their toll.  By the time we left the  Firtina Valley I still had no Black Sea photographs.

And then we stopped.

The following series of photos were taken 5 minutes West from the Sparrowhawk and show typical Eastern Turkey Black Sea views. 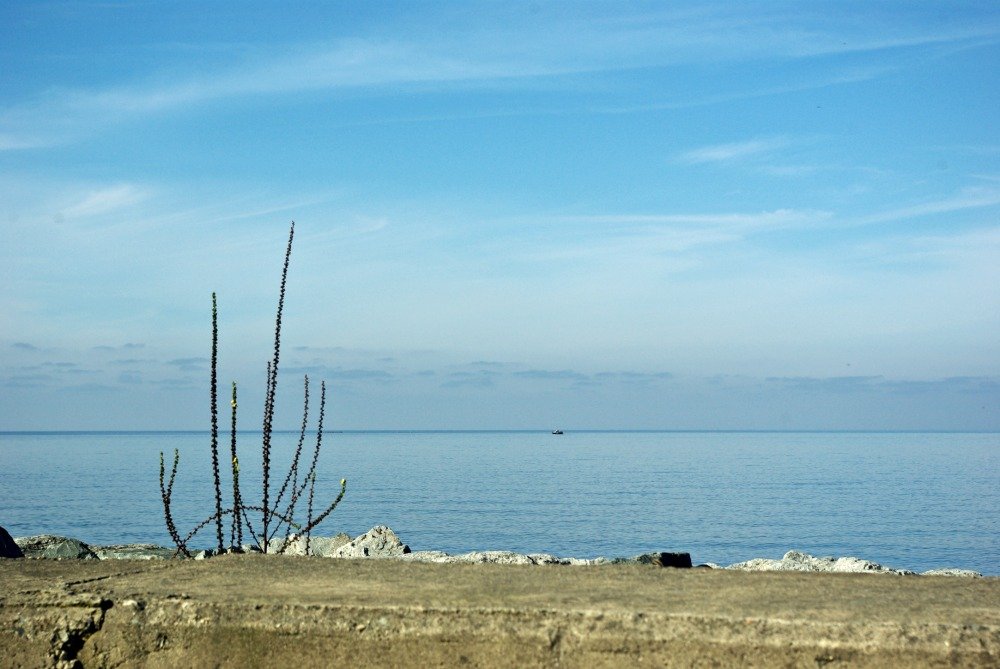 On some occasions the blues of Sea and Sky were so mingled that the horizon disappeared totally.  Perfect water skiing conditions and apart from the water temperature and my lack of long distance swimming prowess, I am pretty sure I could have swum to Russia from there.

I had been pointing excitedly to harbours full of quaint boat houses all morning and then an hour after leaving the Sparrowhawk we found an opportunity to park and go for a walk.

The first photo was taken on my Canon S95 and the next two on Marty’s Pentax K200.  It was getting late in the day and the Pentax does not seem to handle shadows well. 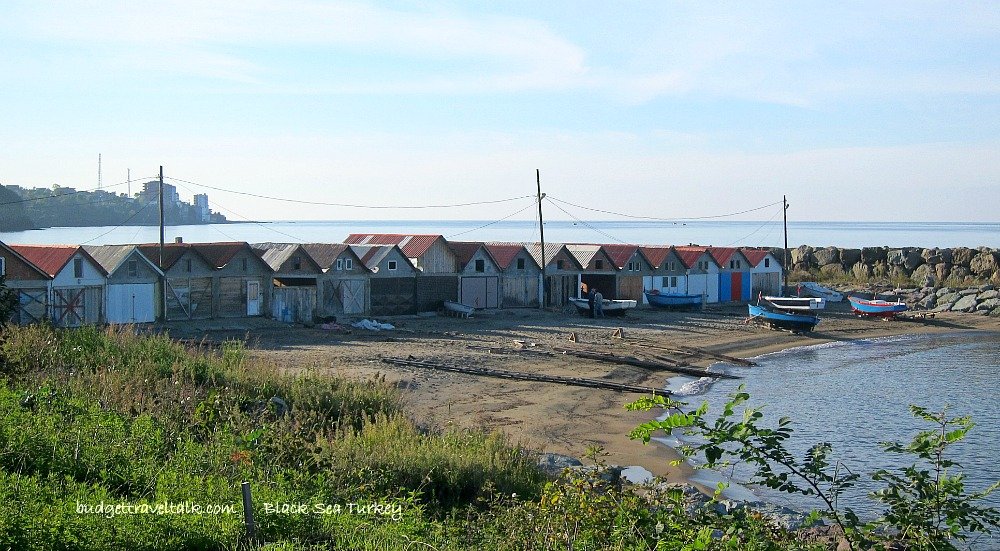 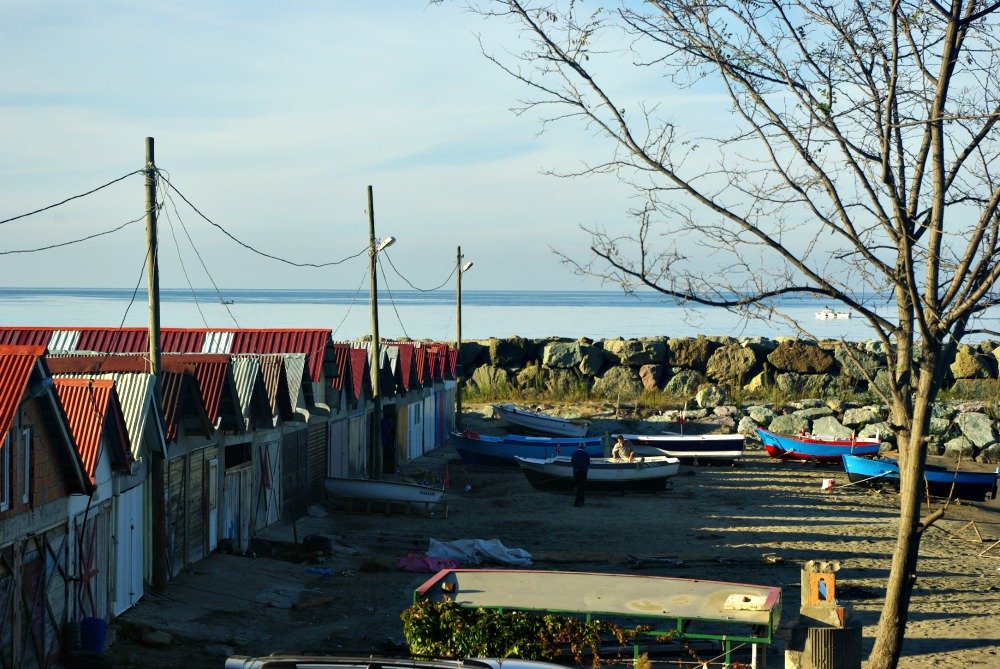 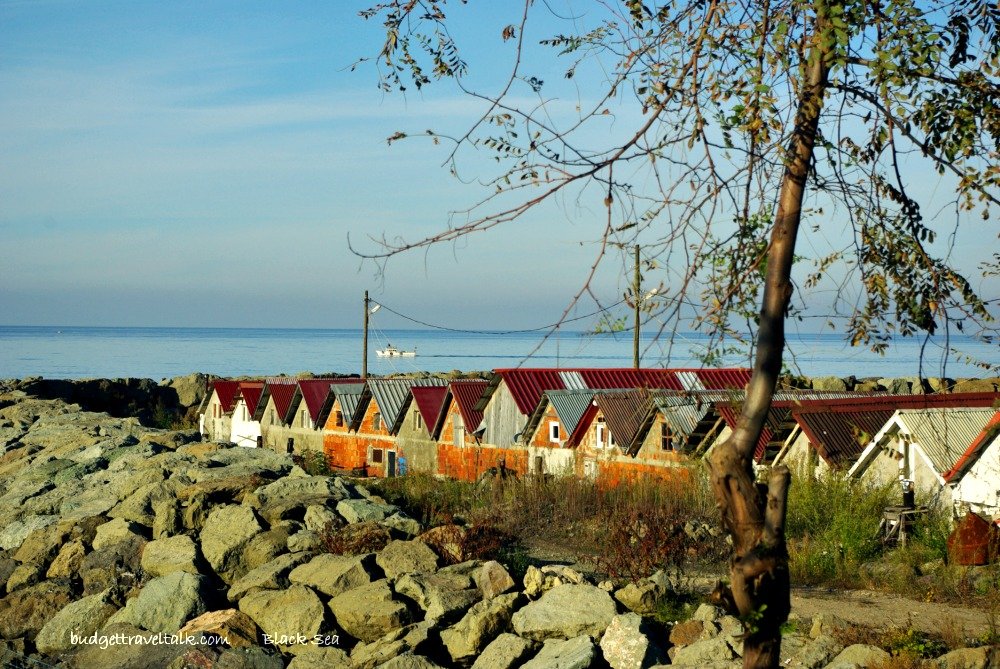 On Day 8, our final day on the Black Sea Coast of Eastern Turkey we would be visiting Sumela Monastery before flying back to Istanbul.  In order to get an early start we were heading for Consandere a tiny hamlet 5km south east of Macka and the nearest town to the Monastery.

I have linked to Nancie’s Travel Photo Thursday over at Budget Travelers Sandbox.

Townsville Strand Rotunda
Next Post: Trout for Lunch at Camlihemsin