Rome is meant for blissful wanderings in the sun, soaking up that Roman atmosphere and enjoying the captivating river neighbourhoods of the eternal city. One of the best walks by the Tiber River in Rome visits a Famous Bridge in Rome, Ponte Sant’Angelo.

Rivers are captivating things and travellers in their own right. They travel across land and through the ages. The Tiber river has a turbulent past bringing destructive floods to Rome, but now she is a benevolent and grand old lady.

This value packed 20 minute walk, is easy to do and great for a small travel budget. It can be done without spending more than a couple of Euro on coffees and not even that if you are strapped for time.

To find tours that include things for couples to do in Rome click here.

Walking is always better if you feel comfortable and this is especially true in a big city like Rome. I like wearing a sling across the body type shoulder bag when walking in Rome and I pack it sparsely. If susceptible to headaches do carry some pain relief in your bag and if using a guide book pop it in there too. Nothing says I’m a tourist, more than toting a guide book.

This post will help you plan your trip to Rome.

The Rione of Prati

Before starting the walk it’s good to know a little about this Rione or district of Rome Italy.

While we loved our room in Rome located in classically charming Trastevere Rome, which literally translates to Beyond the Tiber, we also enjoyed the very different demeanour of Prati.

Prati is business-like by week and sociable by week-end.

This is an elegant upmarket residential area, after all, it is home to the Supreme Court of Rome.

While in the area detour to Via Cola di Rienzo and shop where Romans shop. Continue on from Ponte Regina Margherita to find Via Cola di Reinzo.

Follow this Route to Ponte SantAngelo A famous Bridge in Rome

This Rome River Walk starts by crossing to the right bank of the Tiber at Ponte Cavour and visits: 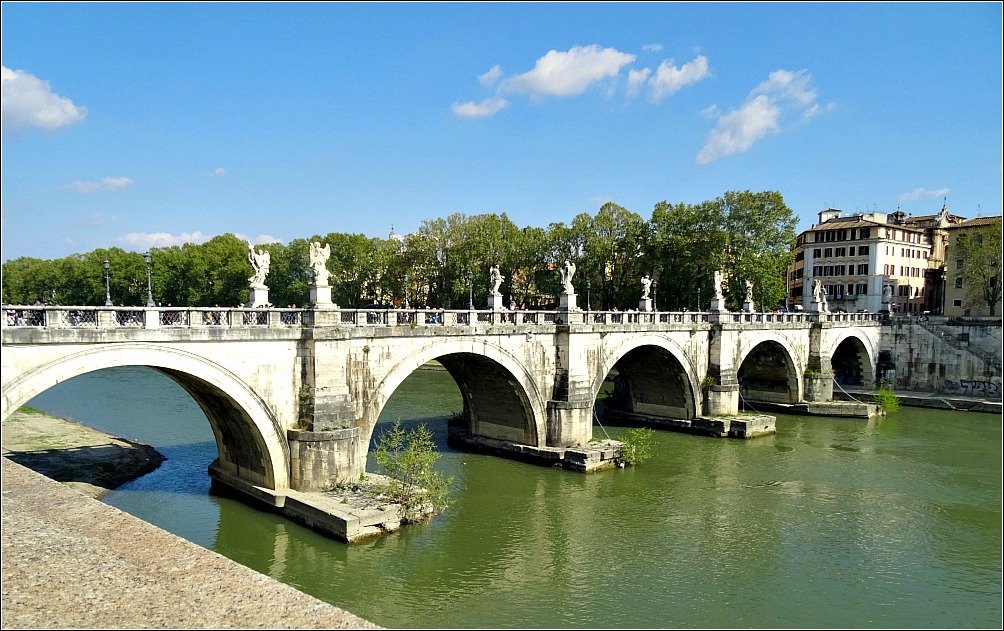 What better way to kick off a walk in Rome, than with a Coffee, snack or Aperitivo.

Antico Cafe Ruschena opposite Ponte Cavour is a classic Roman Cafe located on the ground floor of Blumenstihl Palace. The one time palace is one of those grand old roman buildings that you might not even notice without reason. So typically Rome.

Walk through the imposing glass doors to a long counter cabinet full of delicious food.

Tell the staff behind the counter what you want and if you want to take it to go, standing at the bar or sitting down. You will pay more to sit but it’s worth it in my opinion. It is not etiquette to just sit yourself down and it might lead to not get served. This is not being rude, it’s just the way it works. 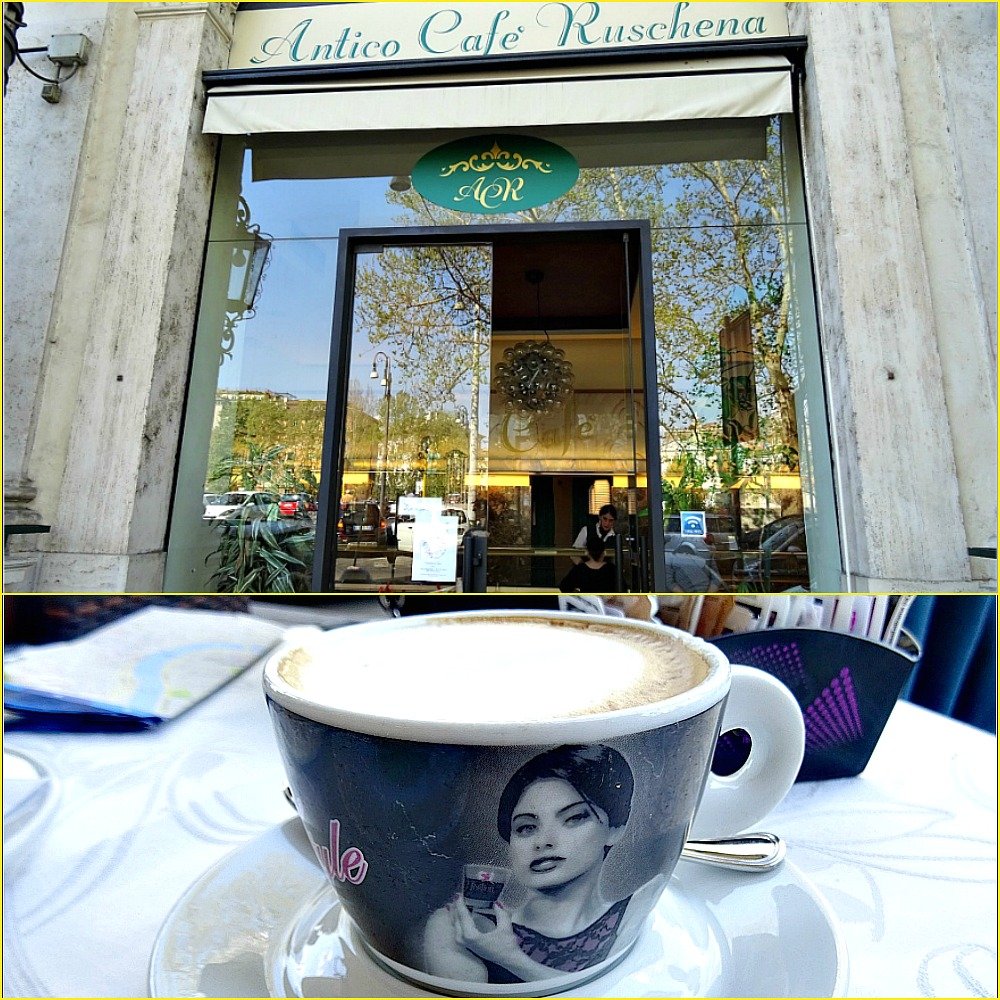 Inside the cafe are comfy armchairs and classic old school Roman waiters to serve, while outside at a river view table, a waiter happily takes our photo.

Grabbing a filled roll to go is popular in Prati and the majority of clientele are Prati residents.

The Supreme Court of Rome.

A short riverside walk beneath trees on Lungotevere Prati leads by the impressive baroque styled Palace of Justice Palazzo di Giustizia which houses the Supreme Court of Rome. 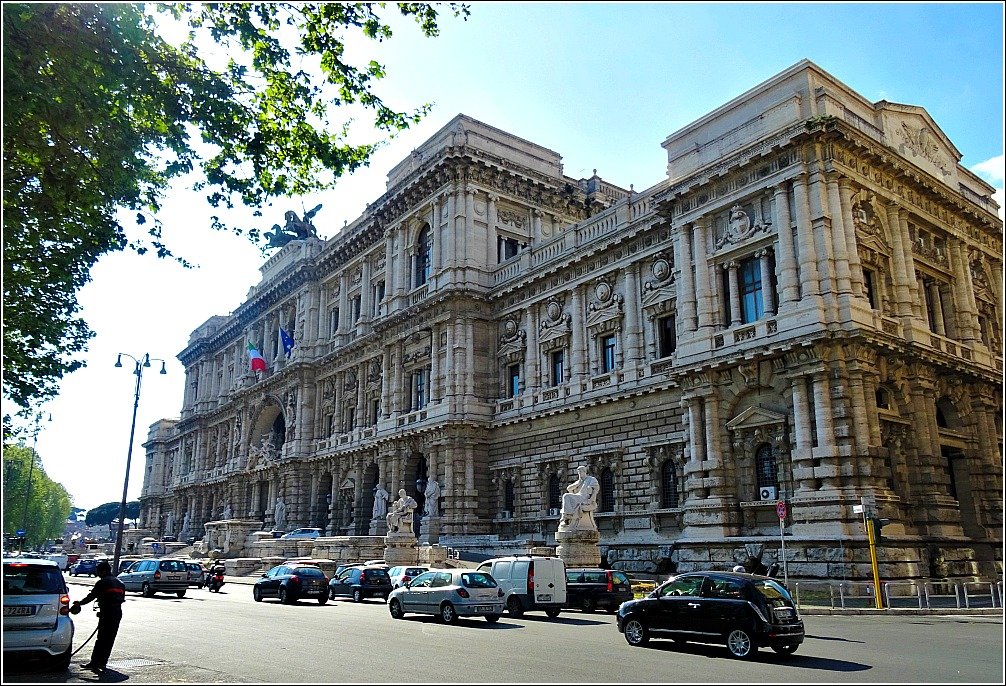 This bronze statue (1926) of a Chariot drawn by four horses by Sicilian sculptor, Ettore Eximenese sits atop the building, while ten sculptures of notable jurists (see above) punctuate the ground floor facade. 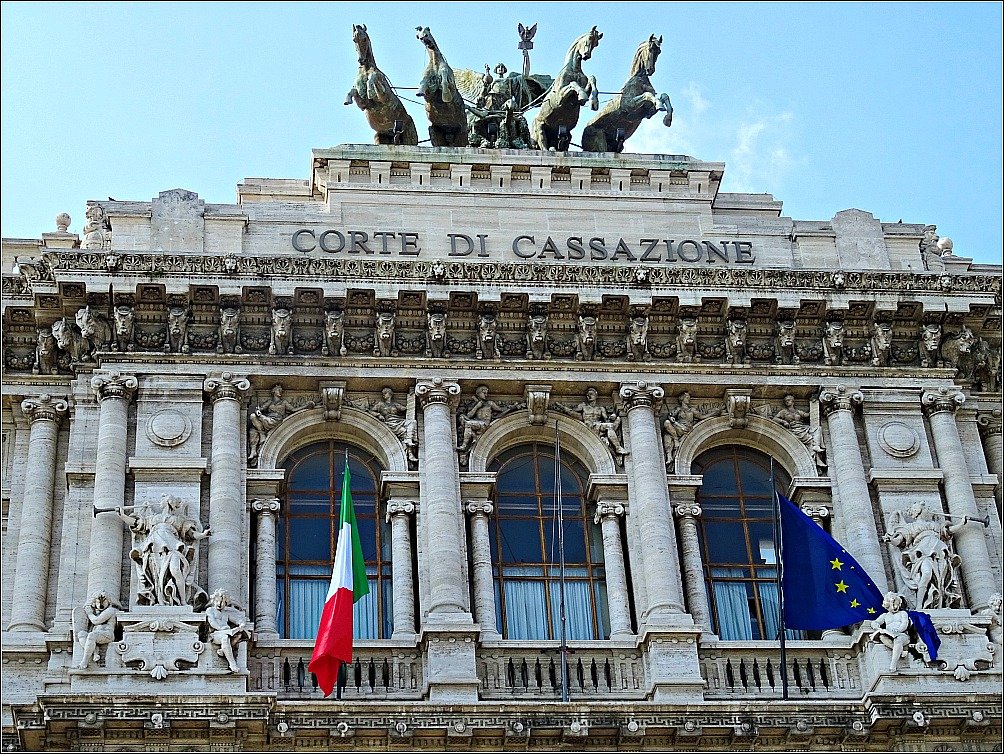 It’s twenty year construction period (ending in 1911) and over the top embellishments led to a corruption commission investigation (1912) and the nickname of The Bad Palace. 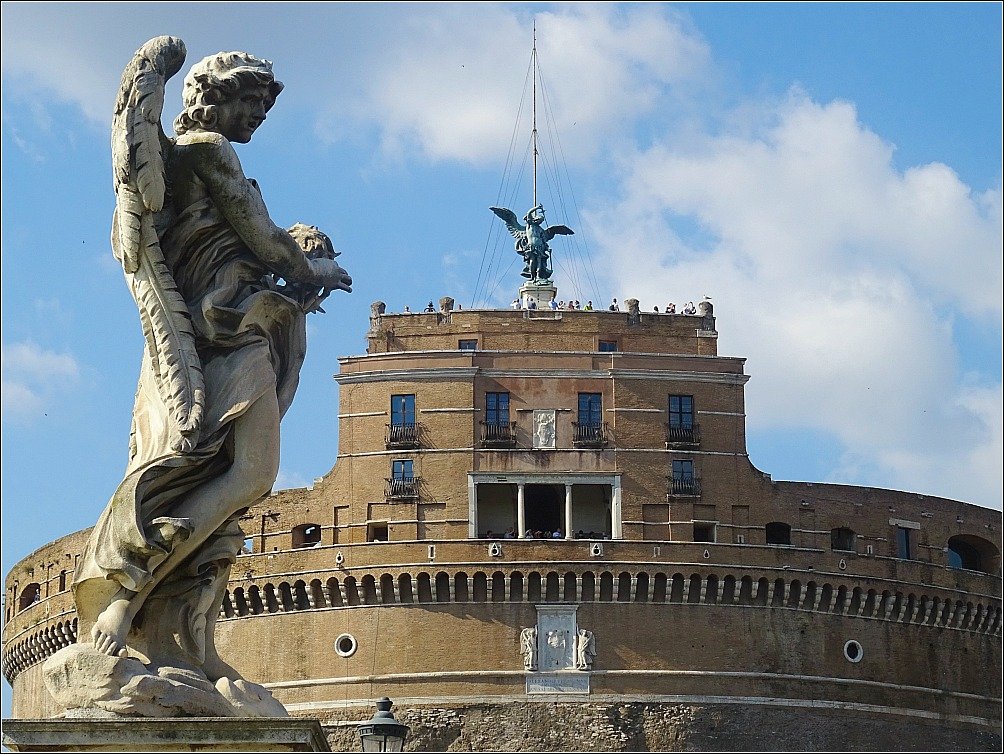 Sant Angelo Castle Rome has had a versatile past. It has been a mausoleum, fortress, prison and now Castel St Angelo museum. Museum exhibits explain the history of the Castle and Rome plus there are great views from the top.

Use free wifi to download the free App after ticket purchase. Information blocks can be found throughout the museum.

Our famous bridge in Rome is directly in front of Castel Sant’Angelo and provides the best vantage point for viewing the Castle.

I like to imagine myself standing on the bridge in the 6th Century when an angel supposedly appeared on the roof of the castle to announce the end of the plague.

Thereafter the castle was known as Castel Sant’Angelo.

Castel Sant’Angelo (and St. Peter’s Square) can be visited as part of a 4 hour Angels and Demons Tour Rome.

The Ponte, or bridge, has been known by several names.

As the Bridge of Hadrian, it was completed in 134 AD by Roman Emperor Hadrian. It spanned the Tiber south of his newly completed Mausoleum of Hadrian – today’s Castel Sant’Angelo.

Pont Castel Sant Angelo is now a pedestrian bridge lined with travertine marble as is the nearby Bad Palace.

At one time it was known as the Bridge of St. Peter when it was used to access St. Peter’s Basilica.

In the 6th Century both the Castle and Bridge became known as Ponte St Angelo when an angel was seen to appear on the roof of the castle announcing the end of the plague.

Although there are more than 20 bridges spanning the Tiber in Rome alone, Ponte Sant’Angelo is one of only a few ancient bridges remaining in Rome today. 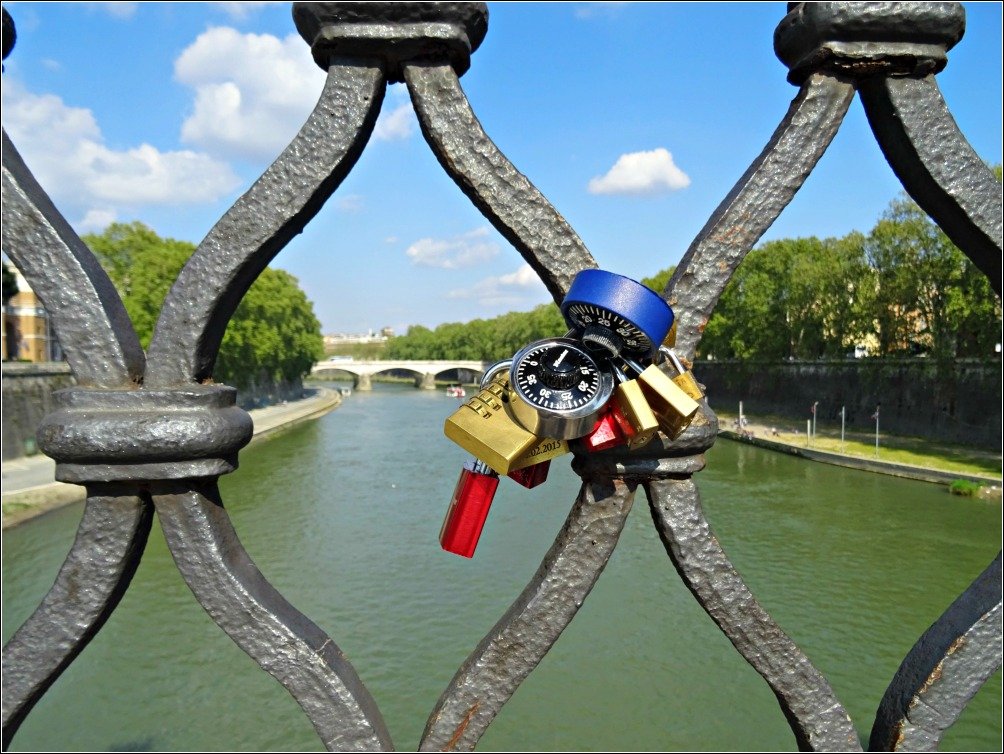 The angel statues really steal the show on the Angel bridge and are one of my favourite parts of the walk.

From 1535 Angel Statues began appearing, the first commissioned out of bridge tolls by Pope Clement VII.

The angels were to hold ten objects associated with Christ’s crucifixion.

Bernini designed them all but only sculpted two himself. The pope decided to keep these himself and replicas were placed on the bridge.

Today the two Bernini angel statues (the originals) are either side of the high altar in the 17th century church Sant’Andrea della Fratte. The church is open to visitors and is situated 4 blocks north of the Trevi Fountain and 4 south of the Spanish Steps.

Angel carrying the Sudarium (Veronica’s Veil). By Cosimo Fancelli. The veil was used to wipe sweat and blood from Christ’s face as he carried the cross. Pin for Later. 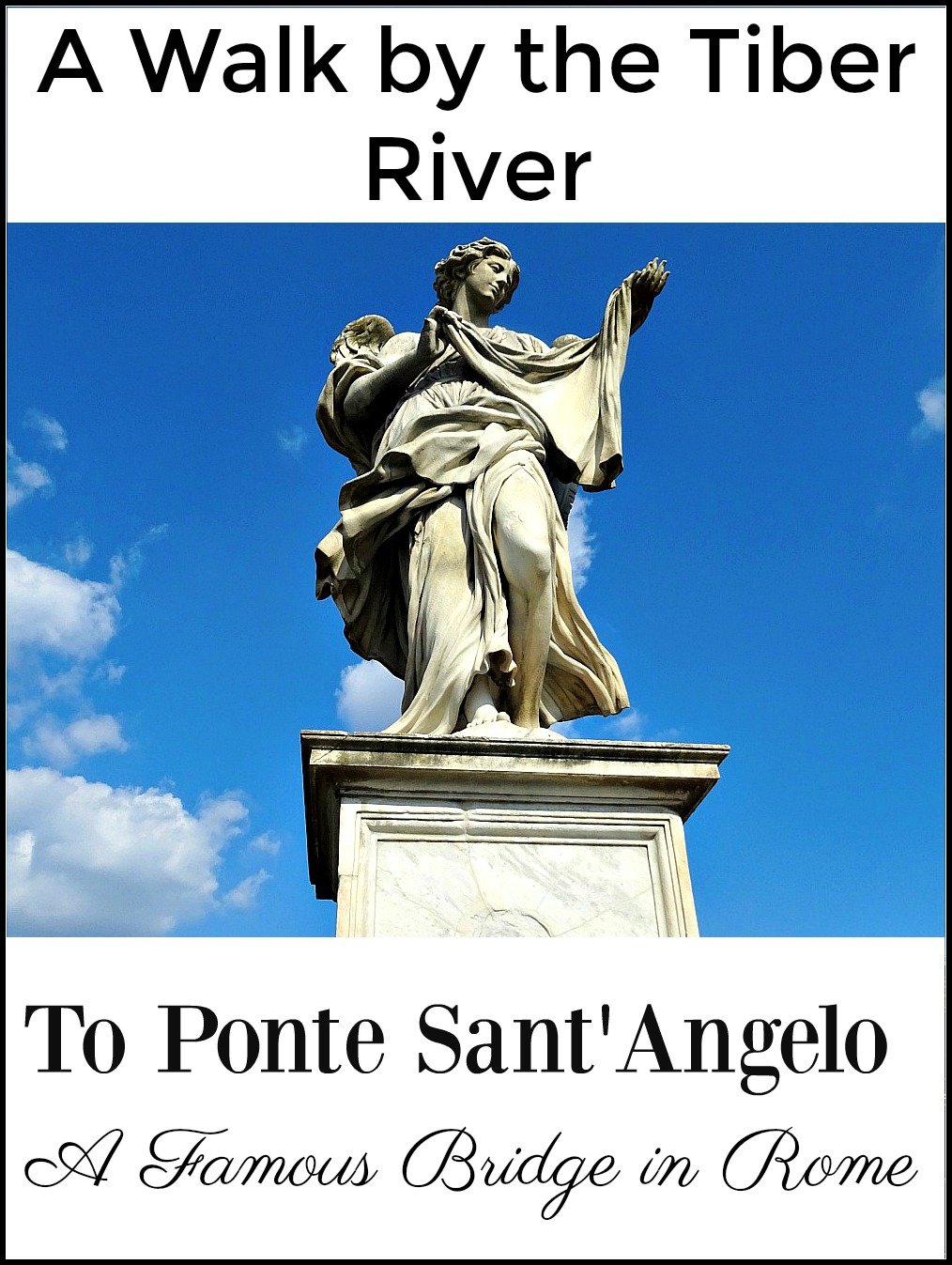 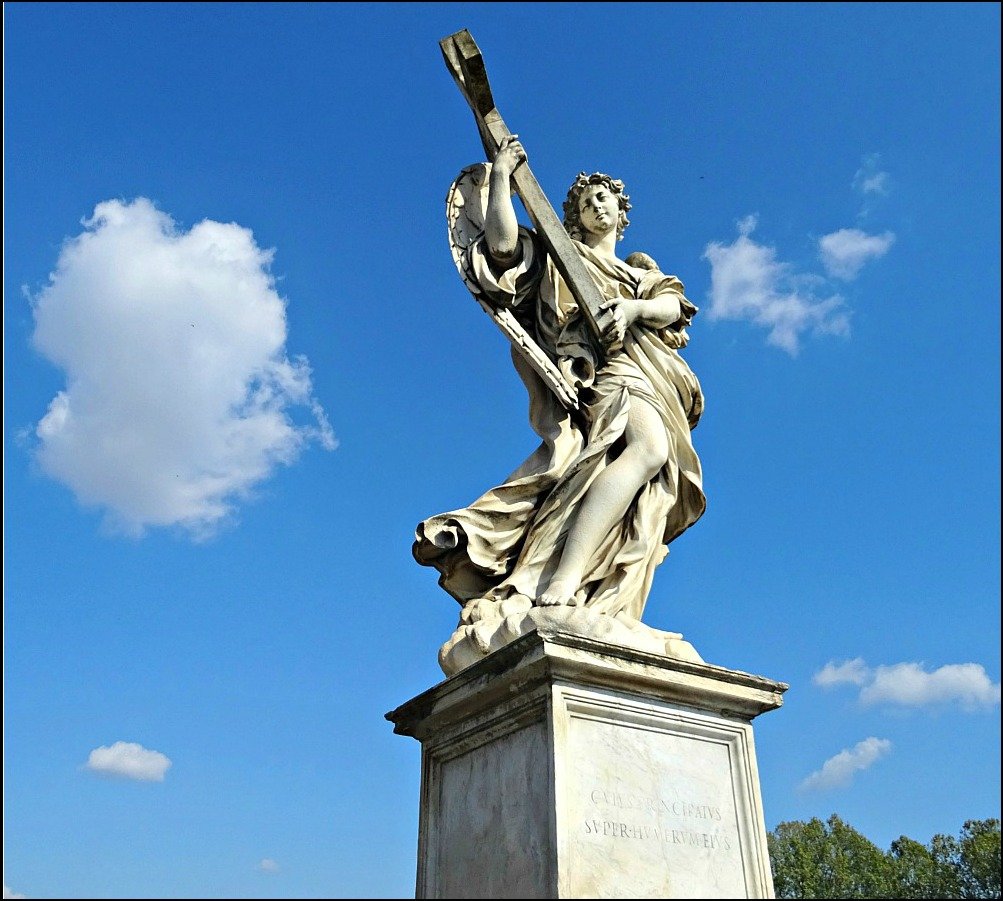 Angel carrying the Column by Antonio Raggi. The column represents what Christ was tied to whilst being flogged. 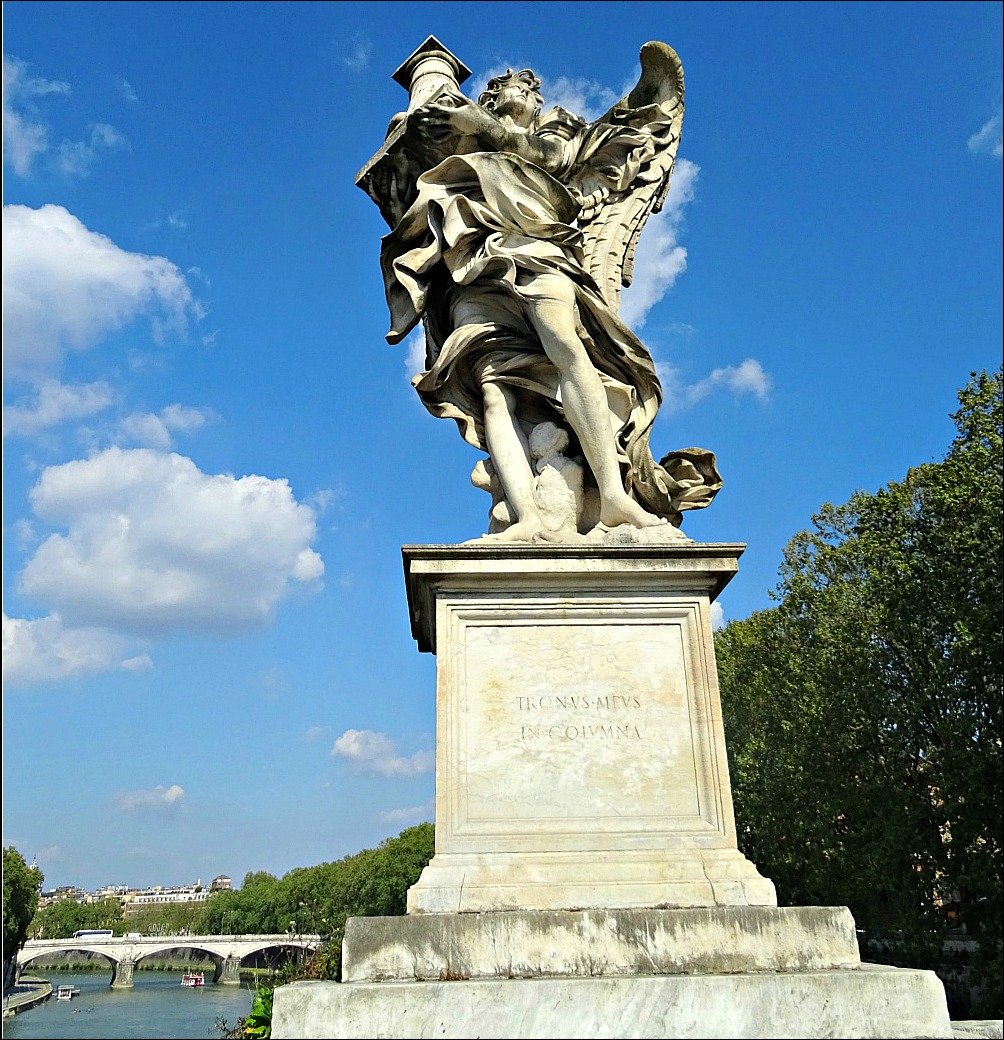 Angel with the Crown of Thorns. Replica of Bernini’s original. It is the only angel statue whose facial features express sorrow. 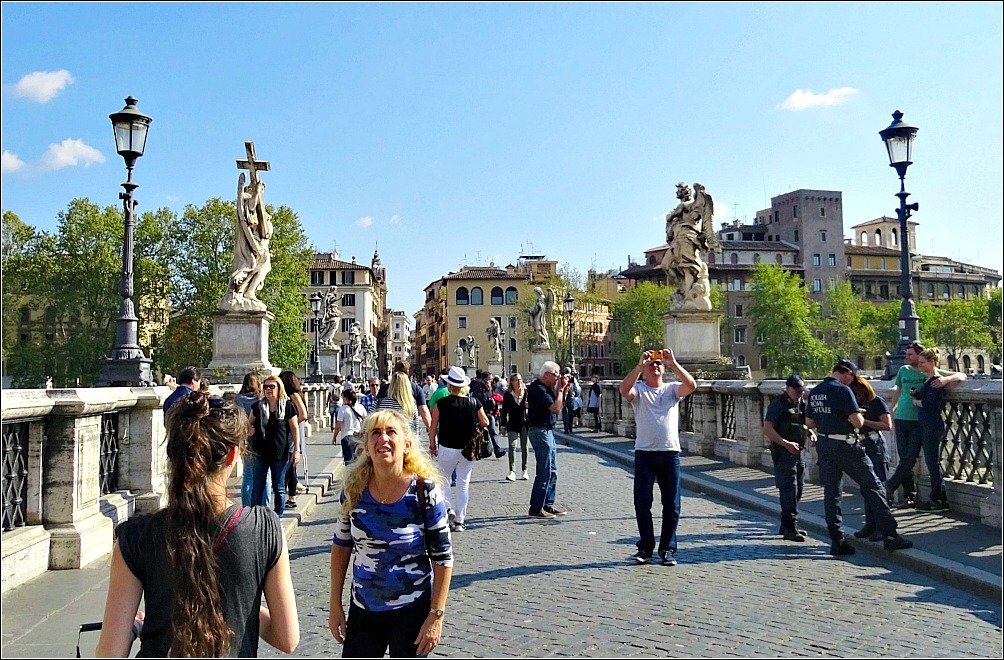 View of St. Peter’s from the middle of Pont Sant’Angelo. 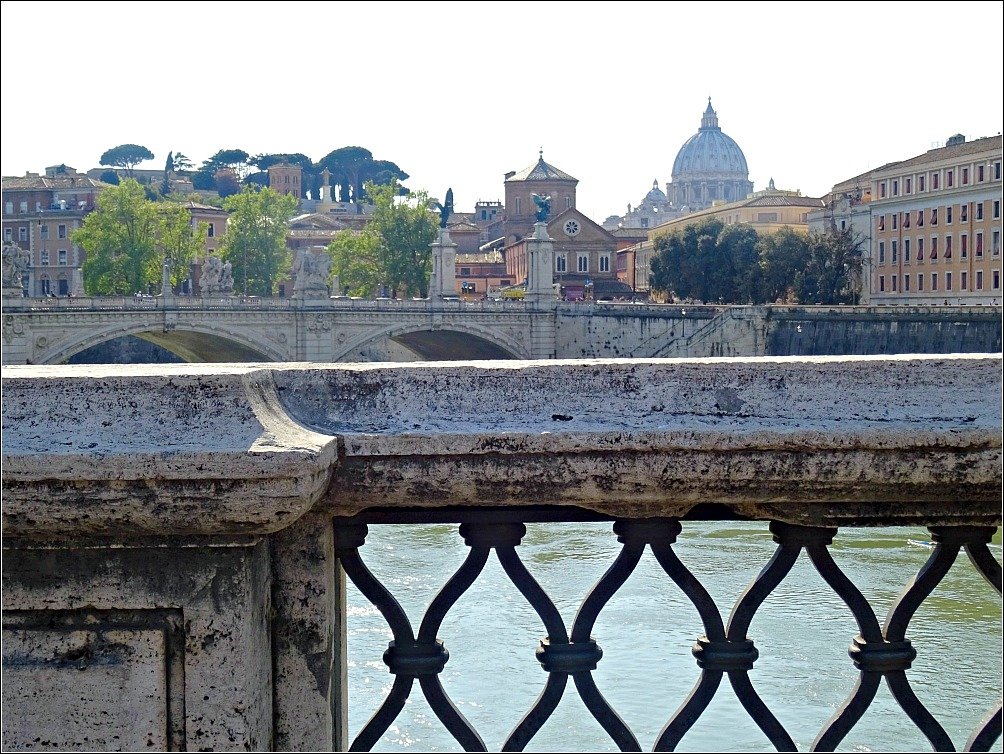 Standing on the bridge in front of the Castle, there is a straight line of view to St. Peter’s Basilica, one of the most famous buildings in Rome. It is worth buying skip the line tickets to view the Basicila and Vatican. Time is precious in Rome. Don’t waste it standing in a line in the hot sun. 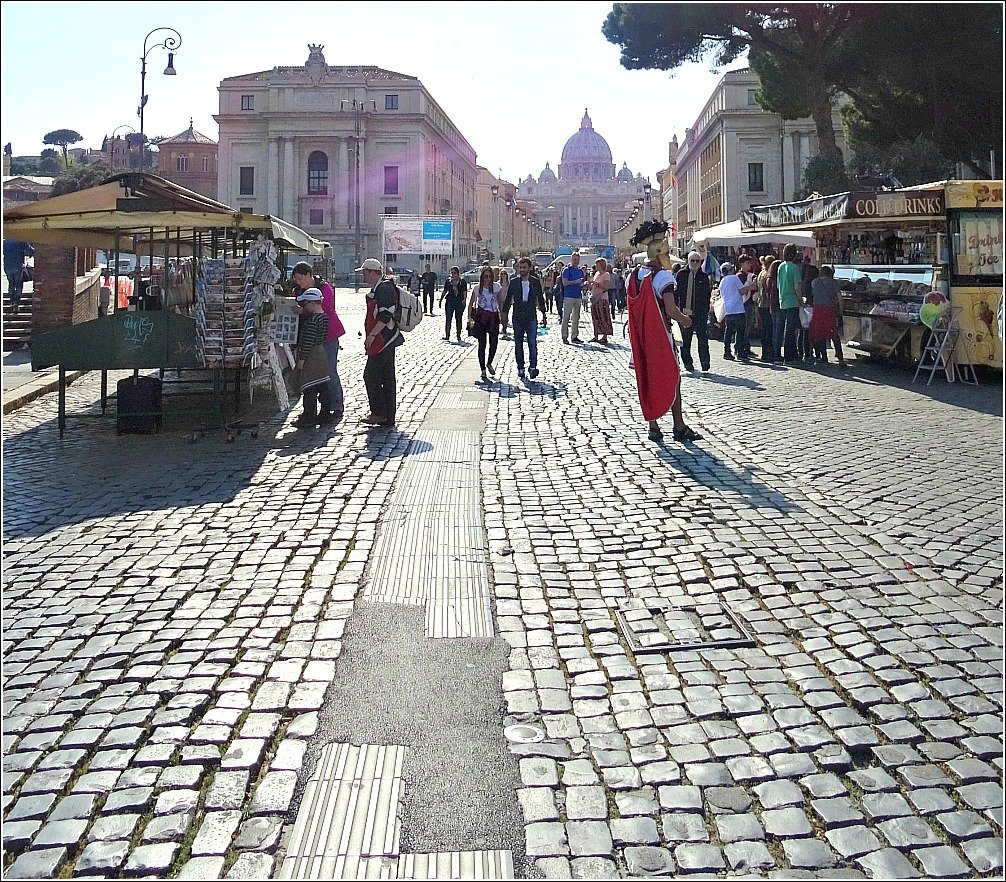 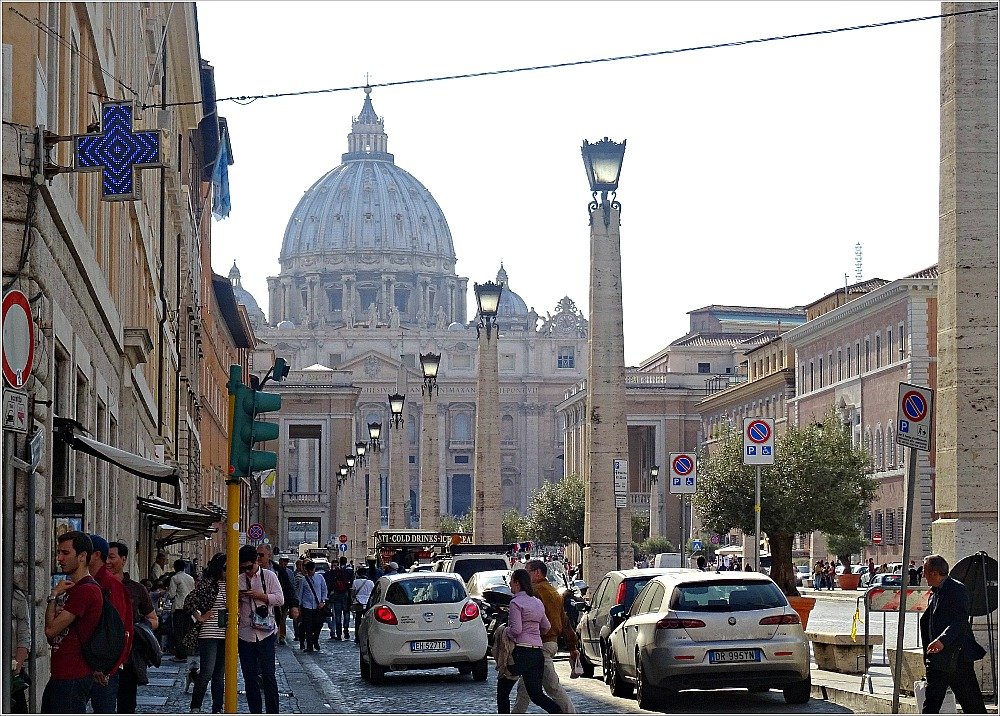 After learning about Bernini’s two Angel Statues on Ponte St Angelo you might be interested in finding more Bernini sculptures Rome.

Bernini is prolific in Rome. He had a hand in two of the three fountains in Piazza Navona.

Where can I view Bernini’s two original angels?

Best time of day to do the walk?

When it comes to walking I always like to start nice and early when I’m feeling fresh, however we enjoyed our late afternoon walk.

A coffee at Antico Ruschena was a lovely relaxing way to start the walk and gave us the boost we needed.

A Twilight walk by the river is about as romantic as it gets and with the sun setting behind St. Peter’s is a good choice.

Where to eat in Rome – Prati Area?

Raf Restaurant, via Plinio n. 17 in the heart of the Prati district, between Castel Sant’Angelo and Piazza Cola di Rienzo. They offer Burgers, Pasta, Pizza, Salads and some Vegetarian and Gluten Free meals. Dine inside or out. Open 12 noon to 12 midnight. Metro A stop – Lepanto.

After ticking off your inner Rome bucket list, take a walk through the neighbourhoods of Aventino, Testaccio and Ostiense.

These areas with their local flavour and wonderful street art show a different side of rome, far away from the tourist hot spots but very enjoyable.

Extend this walk by continuing to the Baths of Caracalla and lunch at Callarello.

Don’t forget the Palatine – it’s where I fell in love with Rome.

If you have a blog, please add a travel post to the link below for Nancie’s Travel Photo Thursday which we co-host with Ruth from Tanama Tales and Rachel from Rachel’s Rumination. All links to blogs are DoFollow. That means I am sharing SEO link juice with you; a good thing!

Moraine Lake Hike in the Canadian Rockies
Next Post: Mt Ninderry and the Cute Town of Yandina