We arrived at the Otogar* in Fethiye on the west coast of Turkey, with two potential Pansiyons in our sights – Dyugu was one of them.  While we gathered our bags and our thoughts, Birol  appeared Genie-like from a doorway – owning a Pansiyon I guess he met all the buses. Do you know where to stay in Fethiye?  he asked.  We told him of both places we had in mind and were amazed to find that he ran Dyugu Pansiyon!

The plan  was that Birol would take us to the Dolmus Stop (a Dolmus is a cheap local mini-bus) put us on the bus, and his brother Ahmet would meet the bus and transport us to the pansiyon.  And so it was.

He Hailed the Dolmus, chatted to the Driver and waved good-bye.  Alighting at the designated stop, right on the harbour, there was Ahmet waiting in a beat up sedan.  With our bags taking up the back seat (the boot was a no go) he drove and we walked.  Only in Turkey! 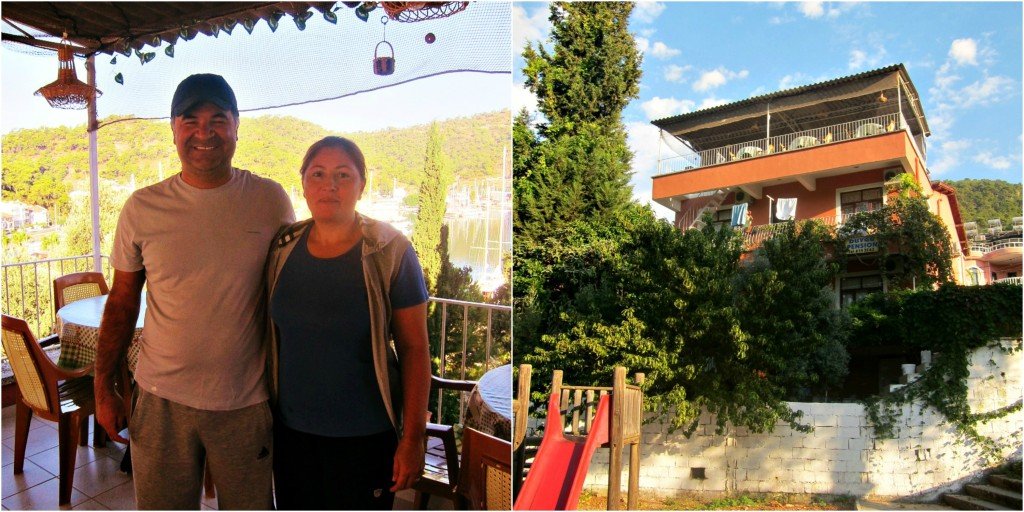 As we climbed the stairs at the rear of the property I noticed they were draped with a heady perfumed vine.  Hmm nice…

A faded strip of red carpet led the full length of the extravagantly wide hall that culminated in a Terrace several storeys above the garden. 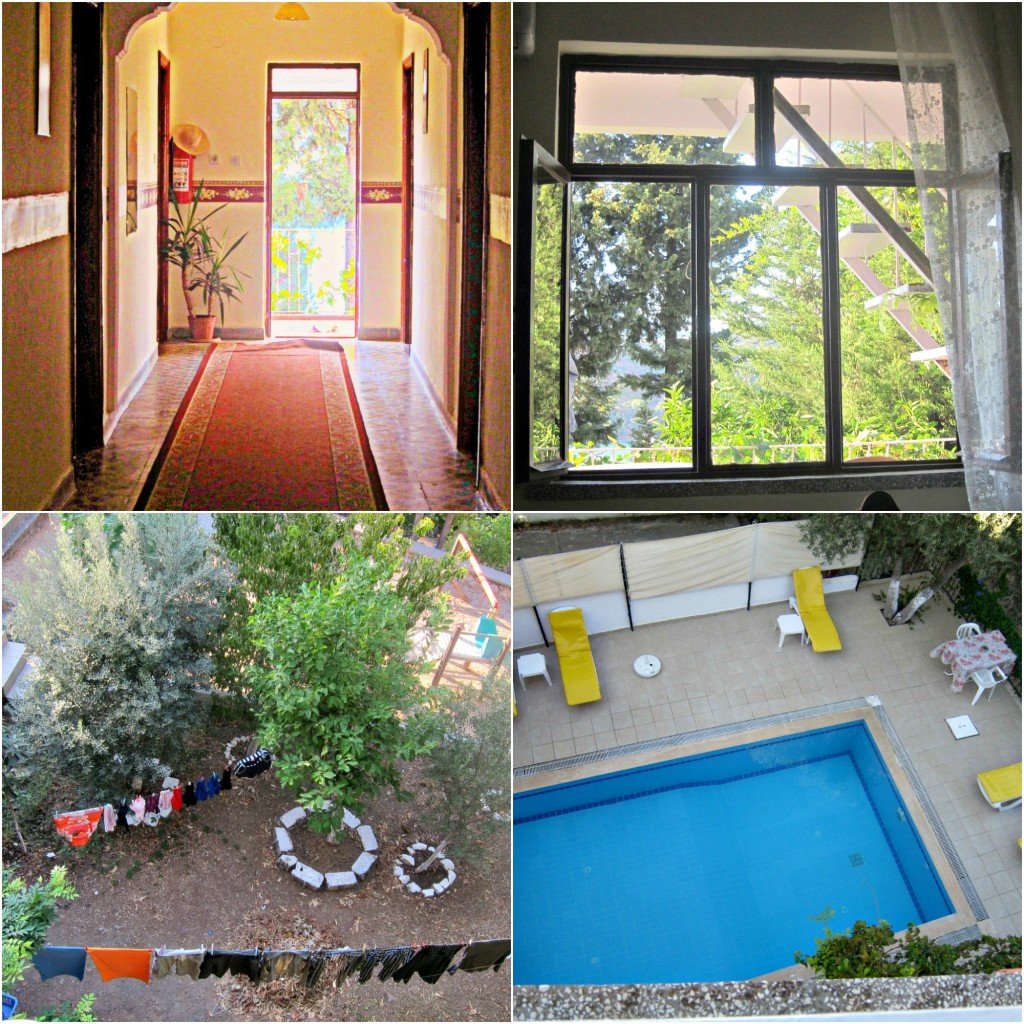 The carpet flipped up at the entrance to our room overlooking the Terrace and Ahmet flapped it back absent-mindedly – how many times was I to do that myself in the days to come?  It was so supple that the stiff breeze repeatedly blew it back.

Entering the room my eyes were drawn to the three clear casement windows that framed the view of Fethiye harbour.  With just one window open the sheer white curtain fluttered in the gentle breeze.  With all three open it galloped wildly.

I knew immediately that we would take the room. 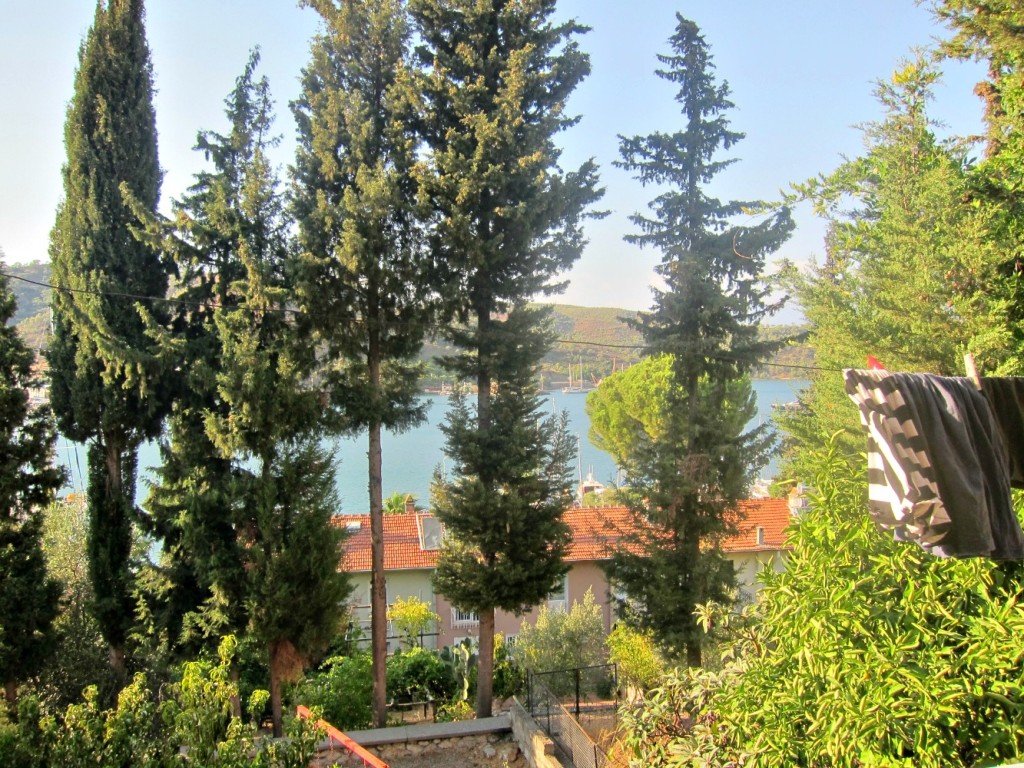 From our terrace an iron staircase led to the covered top terrace where breakfast was served and where we  could make drinks and relax on lounge chairs at any time.  And there was that view again! 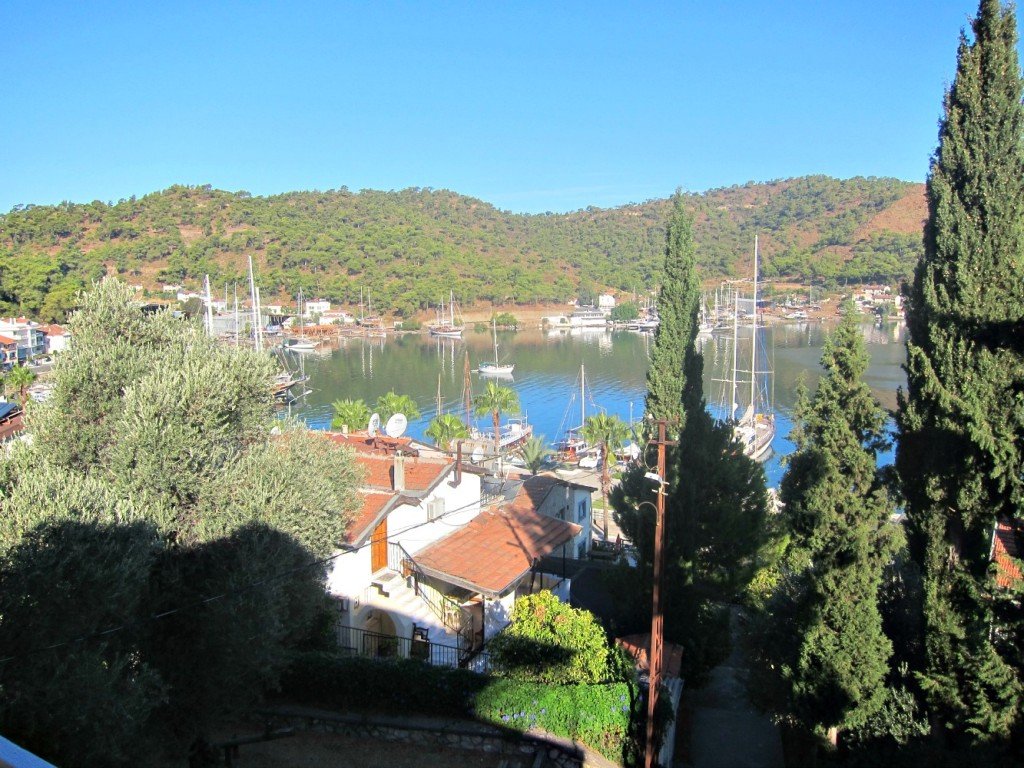 We did eventually take the boat tour as Birol suggested, but for the time being we were more than happy putting our feet up and enjoying the first class view.

Duygu Pansiyon is situated one street back from the Western Harbour at Fethiye, Turkey.  Our double room with ensuite, air-conditioning and breakfast cost 90tl per night.  Birol was totally approachable and really knew his stuff when it came to Fethiye and surrounds.  We purchased our boat tour tickets from him at a better price than from the boat direct.  Birol, his wife and brother Ahmet welcomed us whole-heartedly and we were sorry to leave.  But before we left he obligingly rang ahead and booked our accommodation in Antayla.

*An Otogar is a Bus Station

I received no price concessions or other benefits in writing this post.

Tuesday in Townsville in 2013
Next Post: Fantastic Friday – Wagon full of Sticks – Goreme