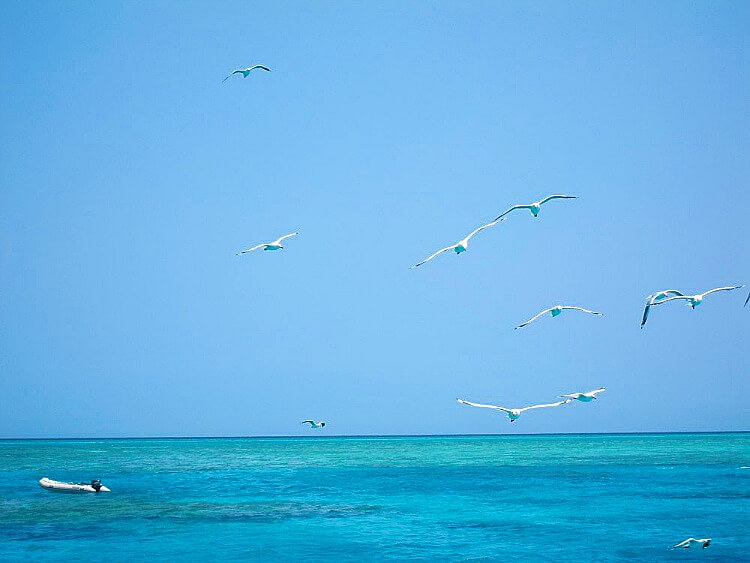 The Lady Musgrave Cruises boat was booked out on the Thursday we arrived, had a maintenance day on the Friday and was booked solid for Saturday and Sunday.

After a chat with the office staff on site they suggested we return on Saturday morning at 8.15 am on Standby.

When it rained Friday night and again at 7 am Saturday we were confident there would be cancellations.  It was difficult to get out of a cozy bed during a storm, but we did and there had been seven deferred bookings.

We were on the boat!

A quick check of the bom.gov.au (weather site) suggested that a storm would follow us out to sea but there would be clear skies behind it.

At $200 AUD per head for the trip, it is a good idea to check the weather report and radar on the Bom site.

Whales on the way to Lady Musgrave Island

Just as we neared the island we came upon a pod of whales made up of mother, baby and male escort.  After several flipper smacks and solid views we picked up speed toward the island.

There was a heart stopping moment when a fully grown whale leapt completely from the water and thumped it’s huge body back down with a mind boggling displacement of water.

It was awe inspiring and whatever else the day delivered for us would be a bonus.

One and a half hours after leaving Town of 1770 we entered the lagoon of Lady Musgrave arriving at around 10.30 am. Once through the narrow man made channel in the lagoon outer we moored along side another Lady Musgrave catamaran.

You can also see whales at the Gold Coast of Queensland.

Will I get Seasick on the Musgrave Island Ferry?

If you suffer from seasickness at all, I suggest you take your usual preventive measures. It is quite often rough on the way to the island. I took my usual tablets and stayed in the fresh air. It worked for me and I did not get sick.

Groups 2 and 3 snorkel while group 1 visits the island.

Groups visit the island separately to limit the amount of people there at any one time.

The island is a National Park and the lagoon forms part of the Great Barrier Reef Marine Park.  No collecting,  removing, standing on the coral reef were some of the rules that were explained by the crew.

The water was a cool (by North Queensland standards) 22 degrees, so we hired short wet suits for a minimal amount, which took the chill off.  The vibe was unhurried and there was plenty of water to spread out in.

Big fish abound around the pontoon and once away from the pontoon timid coral trout peek out from coral bommies, sweet lip (fish) meander in open water and parrot fish of all sizes munch on coral with their buck teeth. Under water the sound of crunching is strangely magnified.

Heaven is swimming with schools of tiny blue, yellow and pink fish at Lady Musgrave Island.

When at first one then two turtles appeared magically by my side, I was besotted.  My first chance to swim with these gentle creatures was peaceful and awe-inspiring. They glide effortlessly and accelerate without any signs of exertion. What amazing creatures.

Jelly fish float in the water of the lagoon attracting the turtles.  The delicate graceful creatures took some getting used to, but they are harmless and added to the experience.

Just a note about swimming ability.

If you aren’t a confident swimmer just let the crew know. The crew have lots of suggestions and aids for non-swimmers and will guide you through the steps of snorkelling. Before you know it you will be enjoying the experience.

45 minutes in the water goes by in a flash and soon it was our group’s turn to the smorgasbord lunch (there are staggered lunch times thereby avoiding big queues).  The home made salads are delicious and I can vouch for the chicken, prawns, watermelon and pineapple too – swimming sure does make me hungry!

Grabbing shoes and cameras, group 3 piled into the glass bottomed boat heading for the island. We walked the gangplank and crunched up the coral beach into an opening in the pisonia forest where a crew member gave a short introduction to the island at the interpretive shelter. 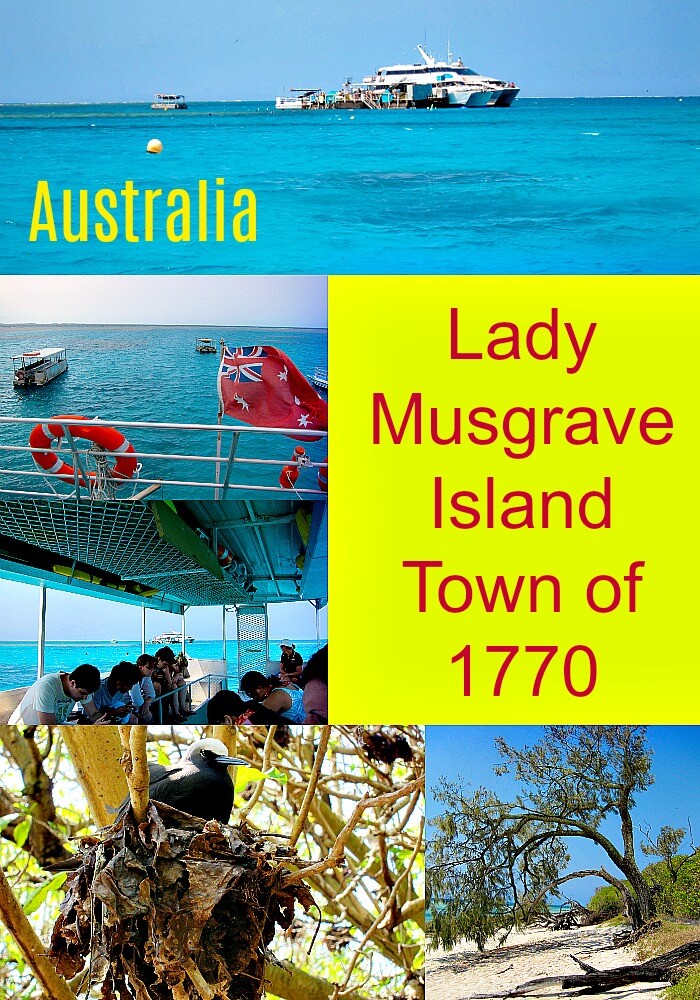 Soon we were following our guide down a sandy leaf littered track through the forest. There are a surprising amount of easily visible tree nesting Black Noddies in nests, right at our eye level. They make their nests of leaves and their own poo.

Sadly some 20,000 die from the gluey tree sap sticking to their feathers and weighing them down.

They in turn decompose and fertilize the soil to nourish the forest.

Time for another Snorkel

Back on the pontoon after our island jaunt, we couldn’t resist another 45 minutes in the water.  Determined not to miss out on anything we criss-crossed the lagoon until we got weary and headed back toward the pontoon.  Gazing down to the depths under the pontoon, the lagoon had one more surprise for us – a giant groper lazily patrolling his territory.

Eventually I was content to climb back onto the pontoon, have a fresh water shower and dry off.

Everyone had to take to their seats for a head count before leaving.  They counted twice to make sure. This was particularly reassuring as in years gone by there have been several incidents in Queensland (not at Lady Musgrave) of people being left behind.

After the biscuits, cheese and nibblies circulated,  many heads drooped into unlikely positions.  The clouds gathered again to farewell the day and back in the river due to a low tide we were ferried in tenders back to the jetty.

Camping is allowed on the island but as it is a National Park there are strict controls.

Next Post: Maryborough Queensland and the Mary Poppins Connection