I have been scouring our photograph collection for Valentine Day post prospects, and perhaps unsurprisingly the collection that made their way into the Romance Folder were all from Italy.  But how was I to choose?

First of all I thought of MILAN and our romantic twilight by the Navigli Canal, walking afterward by the roman columns and bars to view the Duomo at night.

Next my mind went to five days in a Tuscan farmhouse where from the balcony, a glass of mellow red in hand, we watched the sun set across vineyards and villages.  Where we lit a fire to take the chill from the air, as we poured over maps and devoured chunky local sausages.  Where BREAKFAST ON THE TERRACE was to a soundtrack of bees buzzing on lavender/rosemary? and the bells of the sheep grazing the olive groves.

How could I not choose the photographic evidence of Seven Days perched high above the valley in CERIANA, which itself was high above San Remo, on the Italian Riviera. The bells of the church outside our door, thankfully muffled by the metre thick walls, kept our time.  The back roads to villages that clung from the hilltops were scary in the extreme.  So tiny themselves, but with such huge drop offs.  What the roads lacked in protective rails, they made up for with mad cyclists that flew head on around corners directly at us.  We thanked God that stiff coffees could be found in the village bars when we arrived in a state of shock.  Then we found Dolceacqua where we walked over the romantic Monet Bridge and where we lost count of the festive floral arrangements that adorned the alleys of the old town leading ever up to the castle ruins.

Translating to five lands the name refers to the five villages, four of which whose streets rise up from the water and one, Corniglia that sits atop a cliff.  It was early Spring 2010 and we had the mountain tracks between villages we mostly to ourselves.

PLEASE HOVER OVER THE PHOTOS FOR A DESCRIPTION. 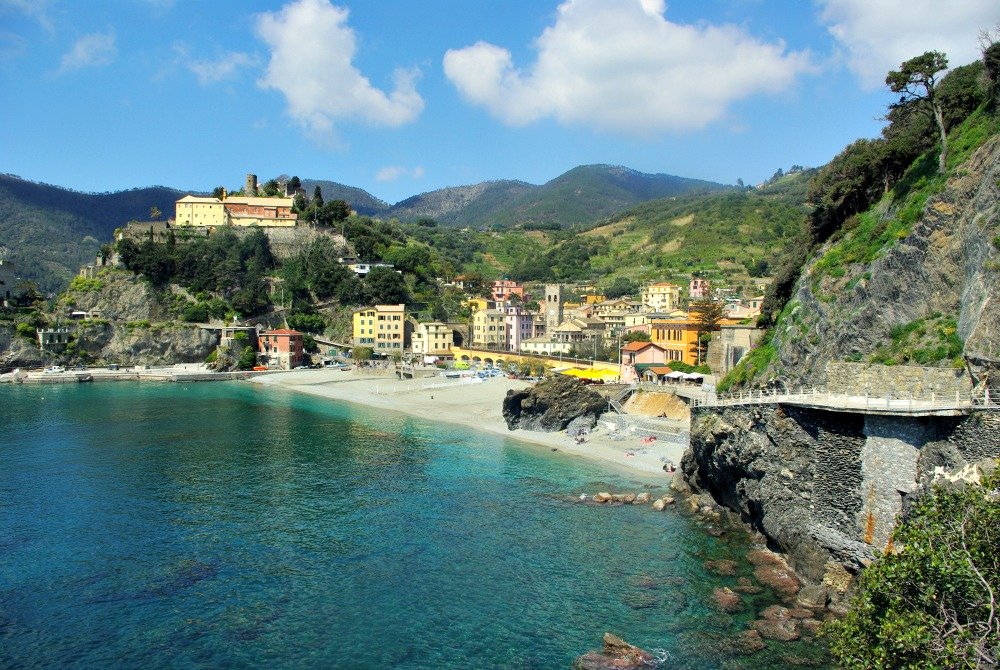 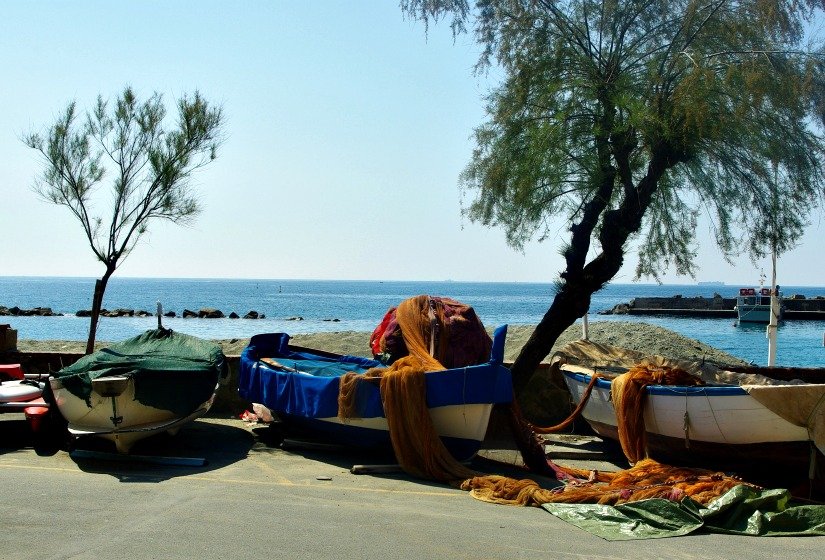 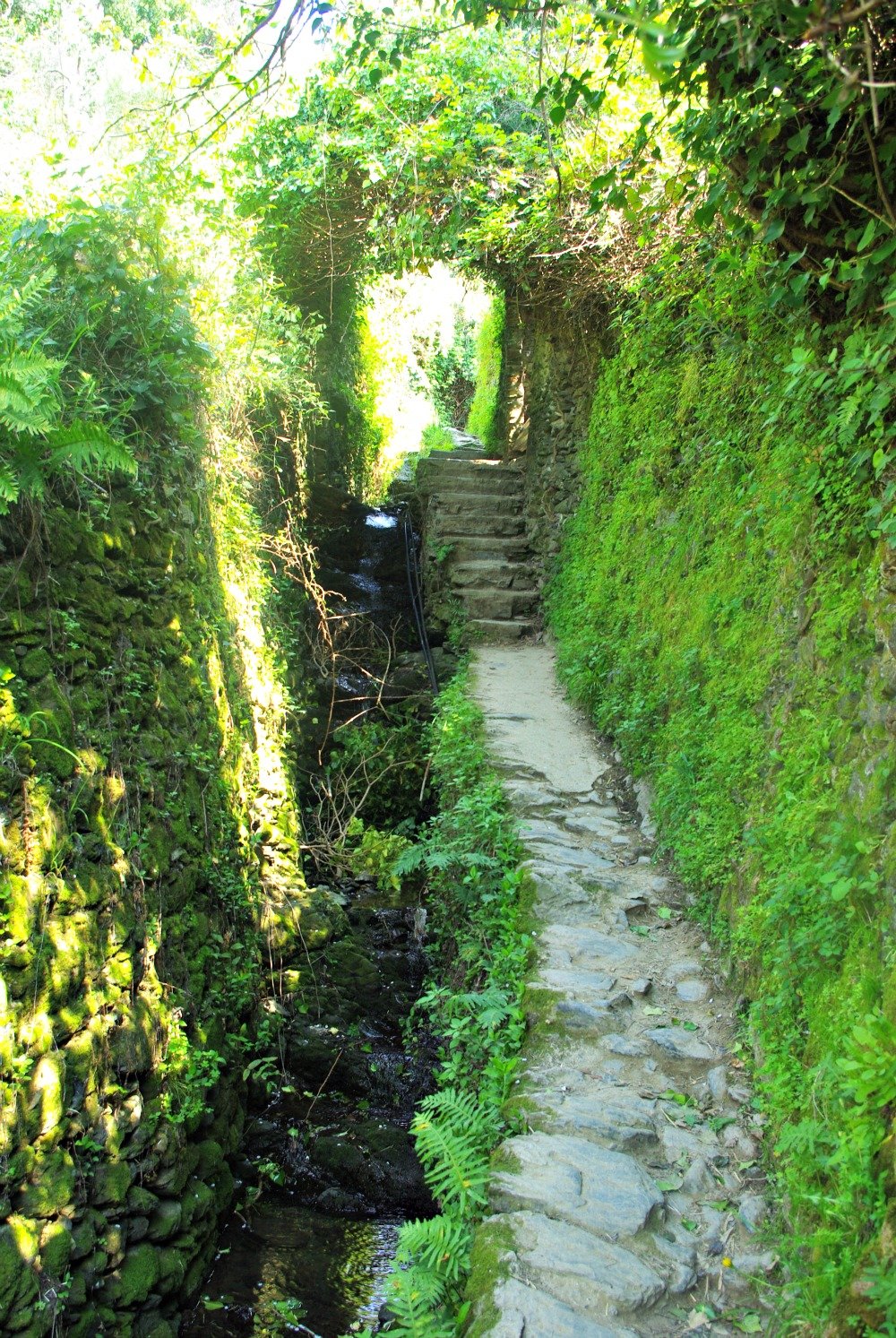 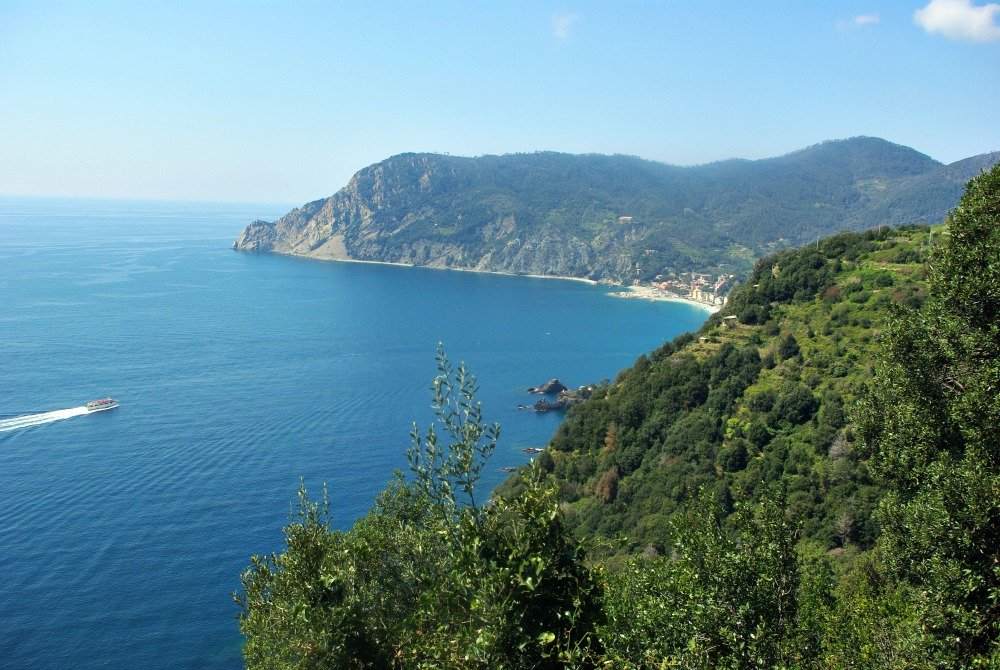 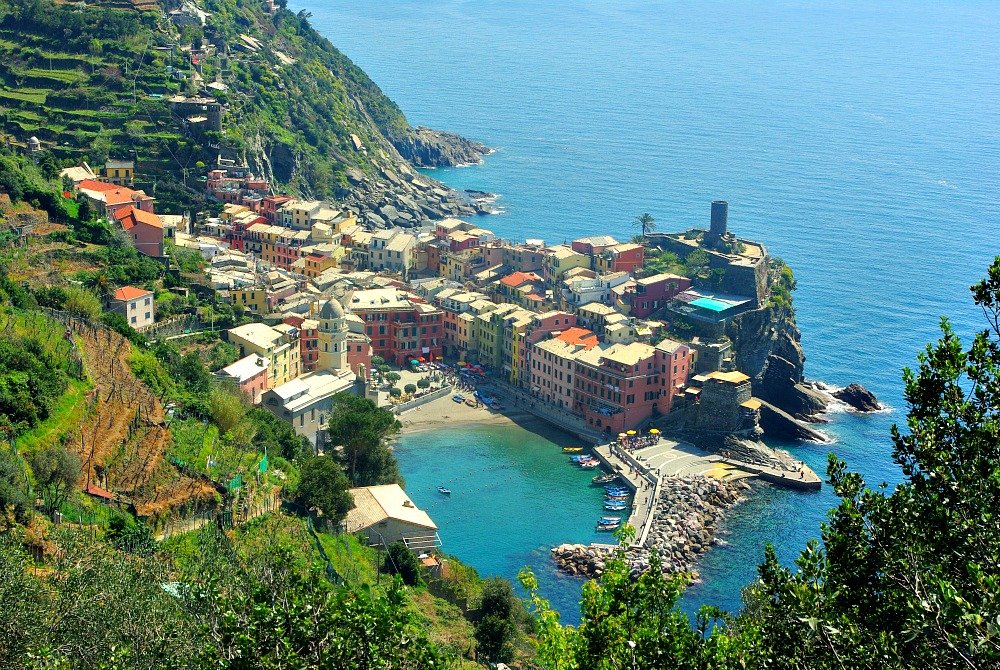 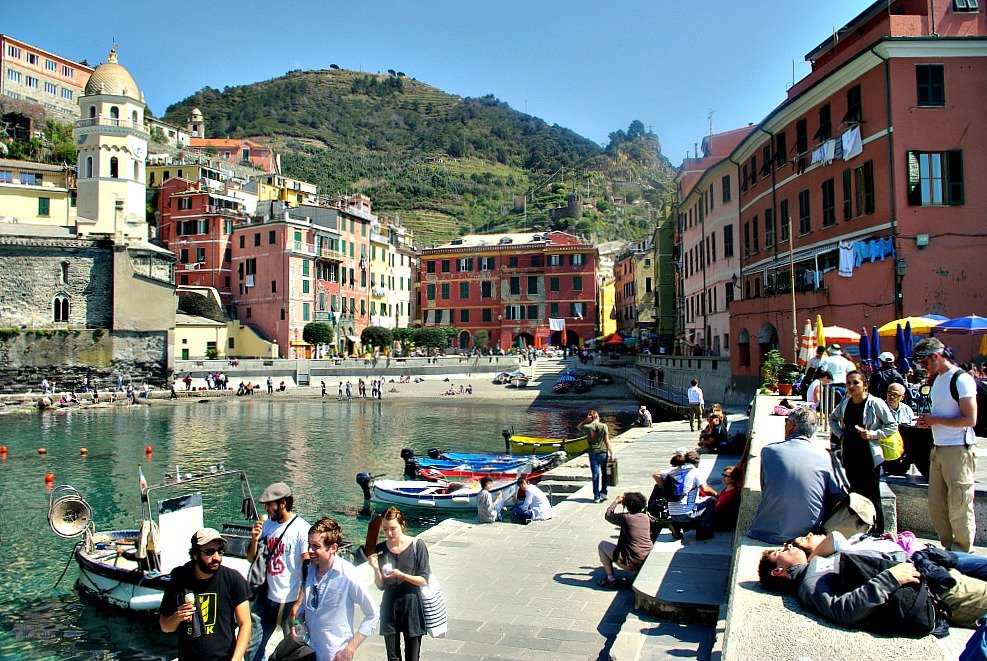 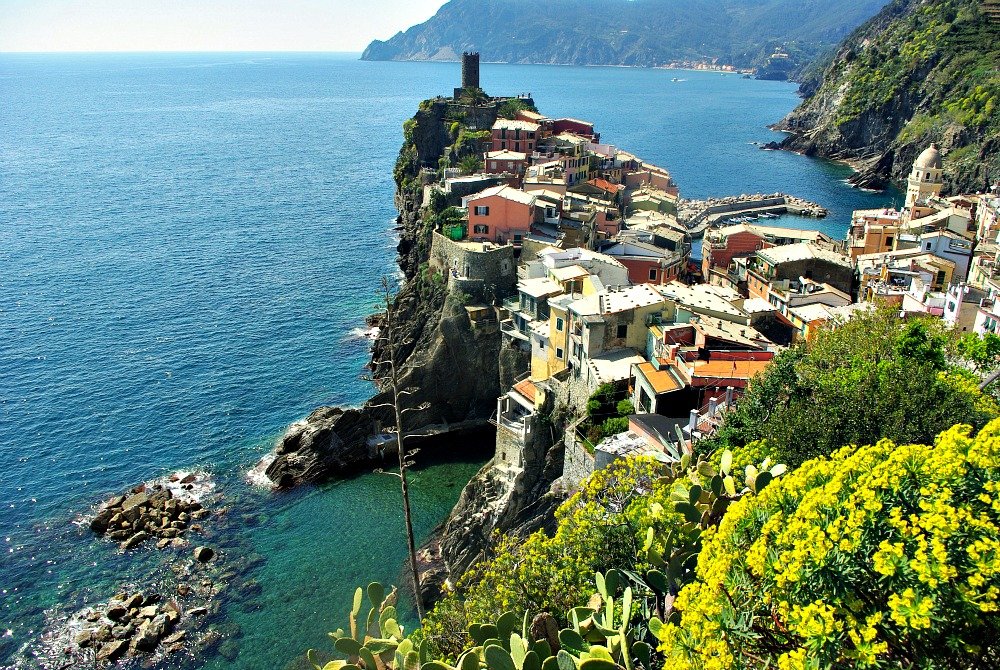 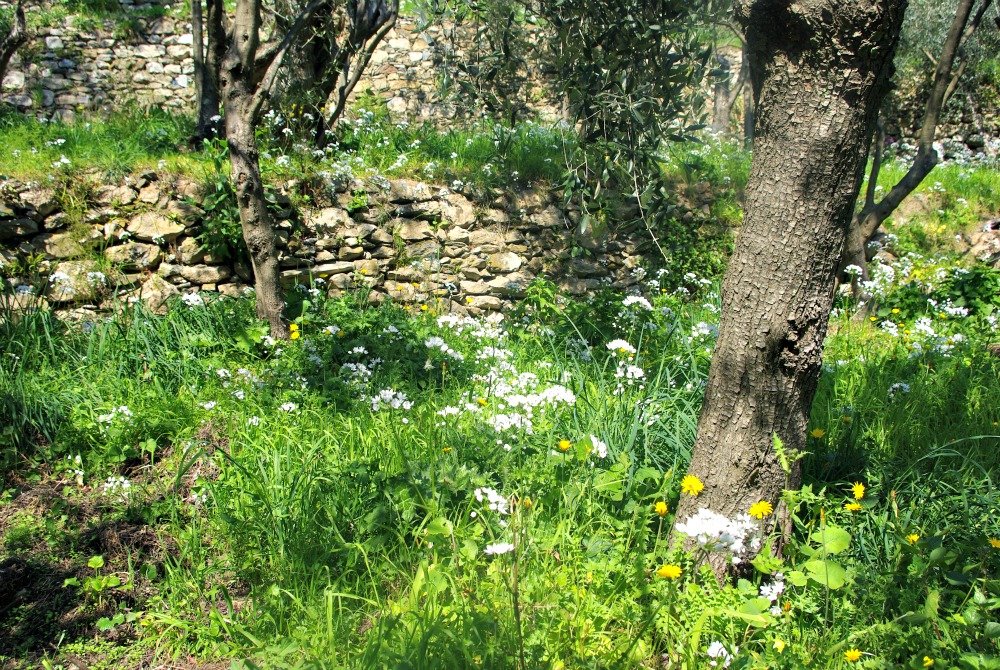 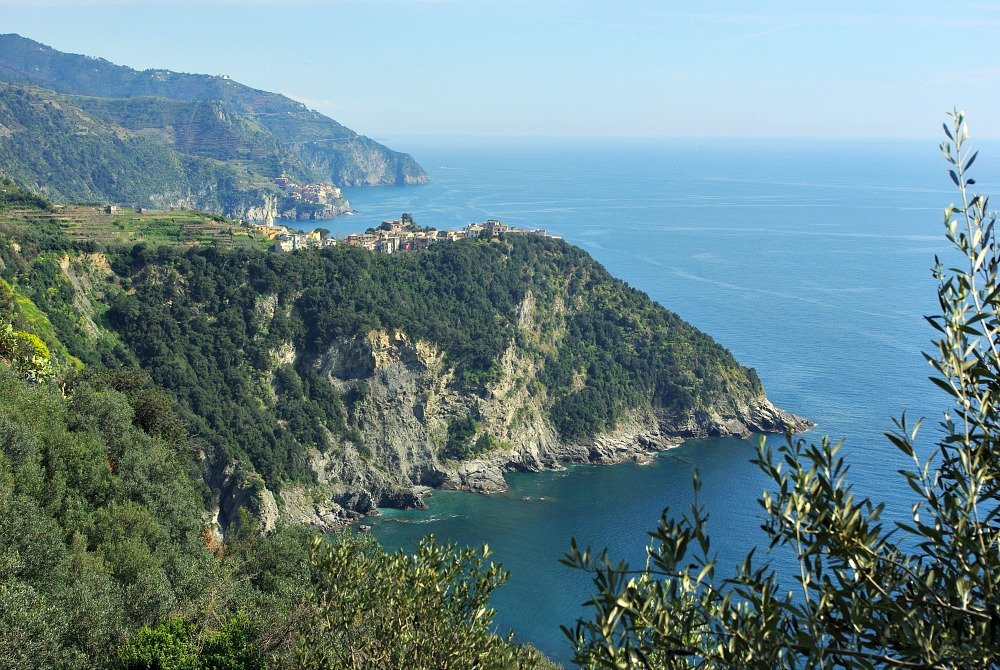 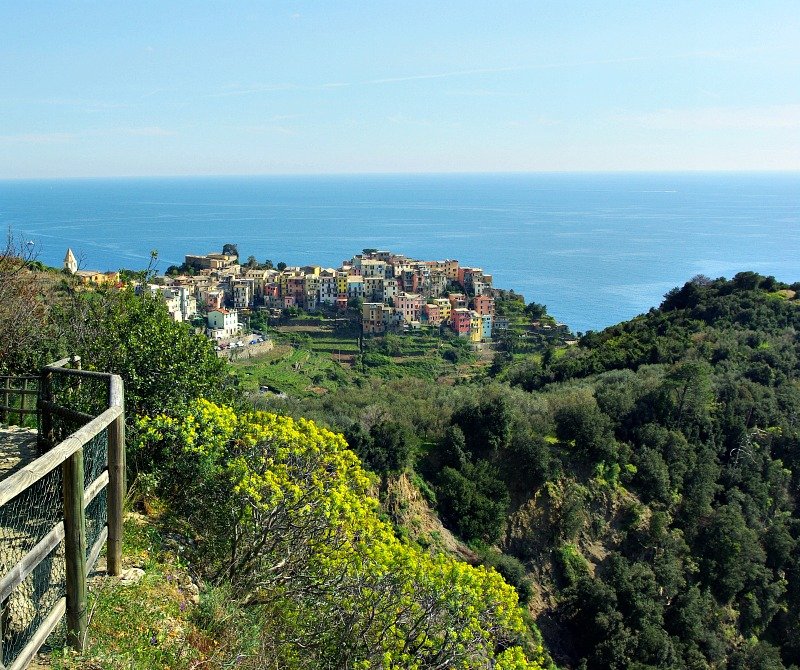 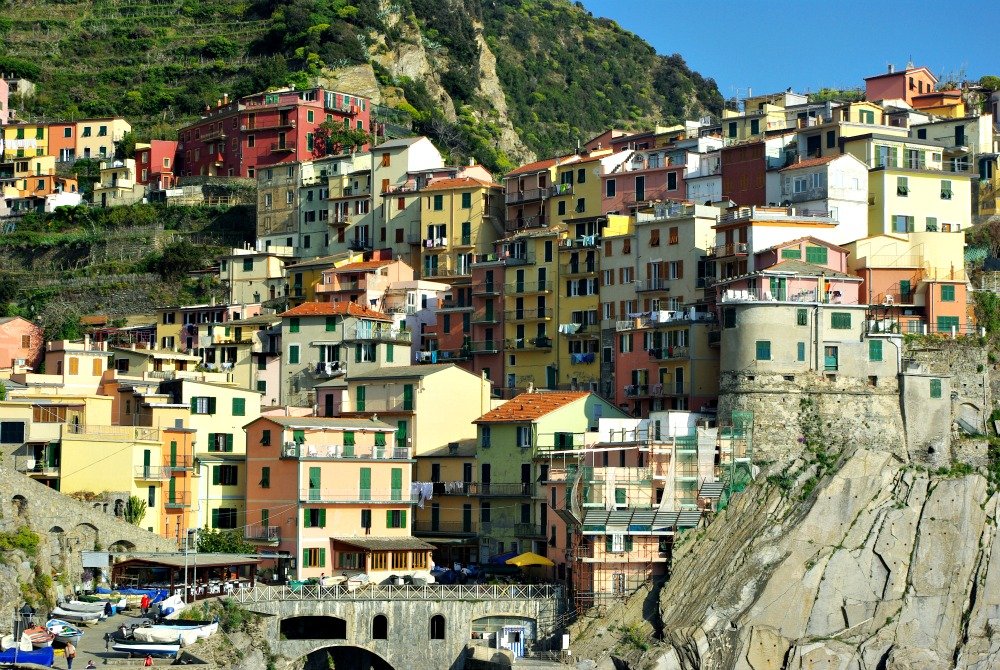 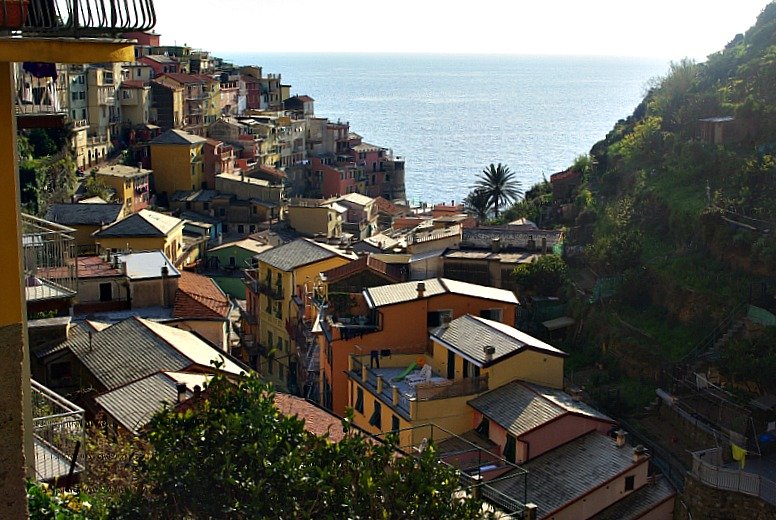 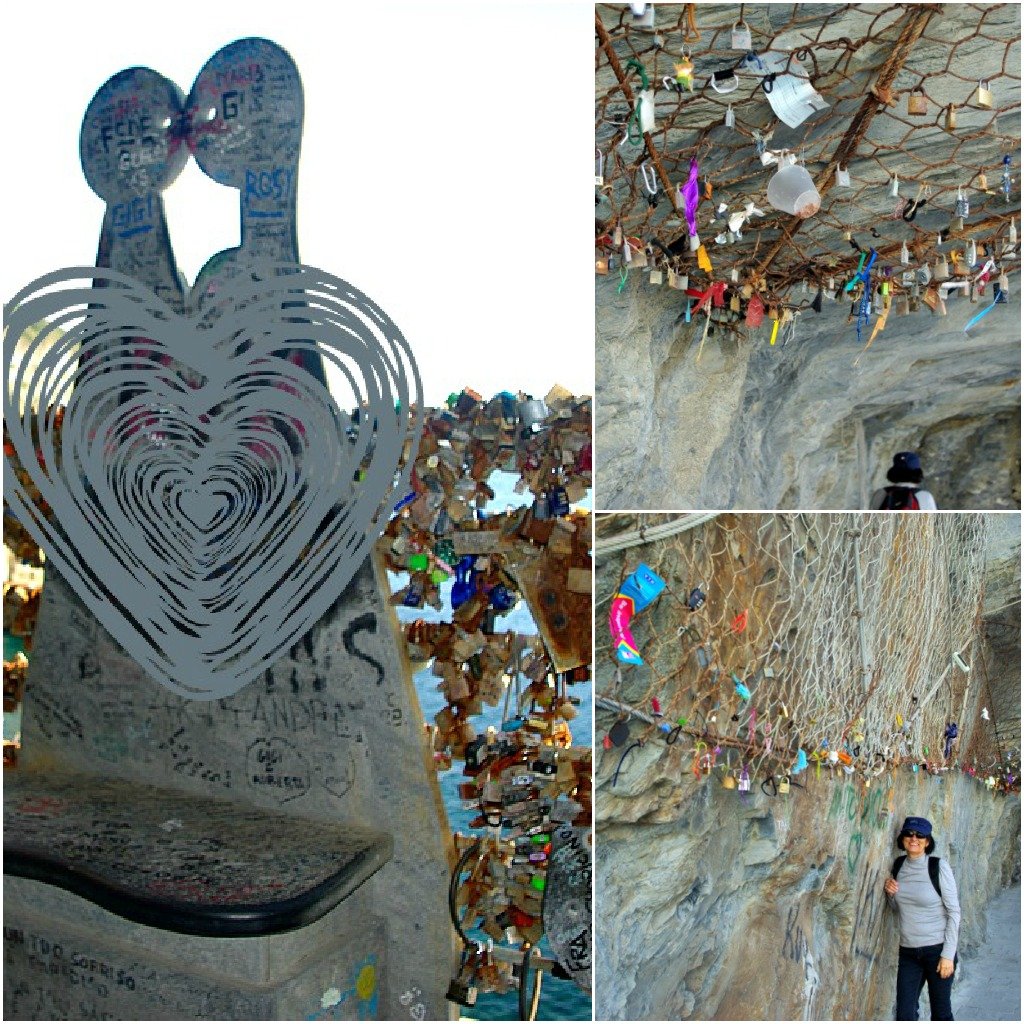 I thought the lover’s walk between Manarola and Riomaggiora was a little tacky, but who am I to rain on other’s romantic parades.  I found the little tucked away paths that led through terraced olives and beside trickling streams to be far more romantic.

B.H. had plans of a romantic night watching the sun go down in Riomaggiora, but a quick check of the timetable had us bolting for the train station instead.  I was very tired after our seven hour walk and was dreaming of a shower, but in retrospect it would have been nice to have stayed.  Maybe next time.

Before you start packing your bags I must tell you that the blue path (path 2) is closed between Manarola and Corniglia due to huge landslides that have since taken the path away, but Path No. 6 provides an ALTERNATIVE ROUTE via Volastra.  The train that connects the five towns is still working according to THIS SITE.

ARRIVING BY BOAT is also an option for all villages except Corniglia. 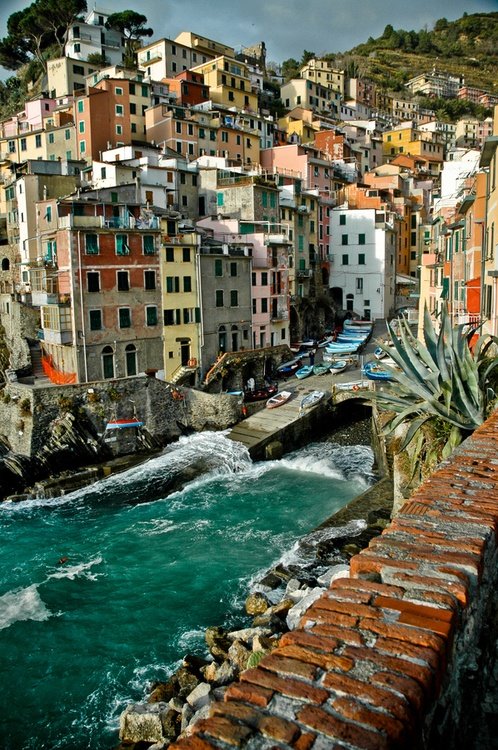 THIS POST IS LINKED TO TRAVEL PHOTO THURSDAY AT BUDGET TRAVELERS SANDBOX.

Previous Post: « Tuesday in Townsville – Hello Lunar Year of the Snake
Next Post: Fantastic Friday – 15 Reasons to Love a Camel