Driving through Eastern Turkey was one of our better Travel Decisions, although I didn’t always think so.  A stomach complaint in Dogubayazit left me momentarily wishing we had not stepped off the well worn tourist trail of the West coast.  I had manipulated things to fit this Eastern Turkey Road Trip in to our six week Turkish visit and an upset stomach didn’t put me off for long.  I was living the dream.

Compared to Marty, my eating habits err on the side of adventurous.   That is not strictly true actually, because he will eat things that I would not even try, but he is a little picky about where he eats them.  We asked our hotel Manager the name of a good place to eat (Tad Restaurant) and then after enjoying several lovely meals there, I couldn’t resist the lure of a huge meat on a stick affair I had seen elsewhere. What can I say.   Marty had one mouthful of meat after which no more passed his lips and although I thought it tasted strange I didn’t think it was off.   And so it was that I became enamoured of the toilet at our hotel and then later on the little white pills that enabled us to keep to our driving schedule.  We didn’t have the luxury of time as the car was due back at Trabzon Airport mere hours before our flight back to Istanbul in three days time.

I still have my doubts as to whether it was the meat that made me ill, mainly because there were three other travellers at our hotel who were sick.  Two were in recovery stage when we arrived and I never found out who the third was, but we all heard him being horribly sick during the night.

As we were leaving Dogubayazit Marty suggested a visit to the supposed site of Noah’s Ark but I was too focused on my stomach to rise to the occasion.  I am pretty sure it has been scientifically dis-proven as the actual Ark, but you can read about it’s location here.

The 5,137 m high dormant snow covered cone of Mt. Ararat dominated the landscape as we left Dogubayazit.  Agri Dagi (Ararat’s Turkish name) – 16km west of Iran and 32 km south of Armenia – was on the my side of the car and we stopped often to take photos.   Power lines and debris provided a poor photo frame for such a mountain, but in a way they made Agri Dagi even more impressive. 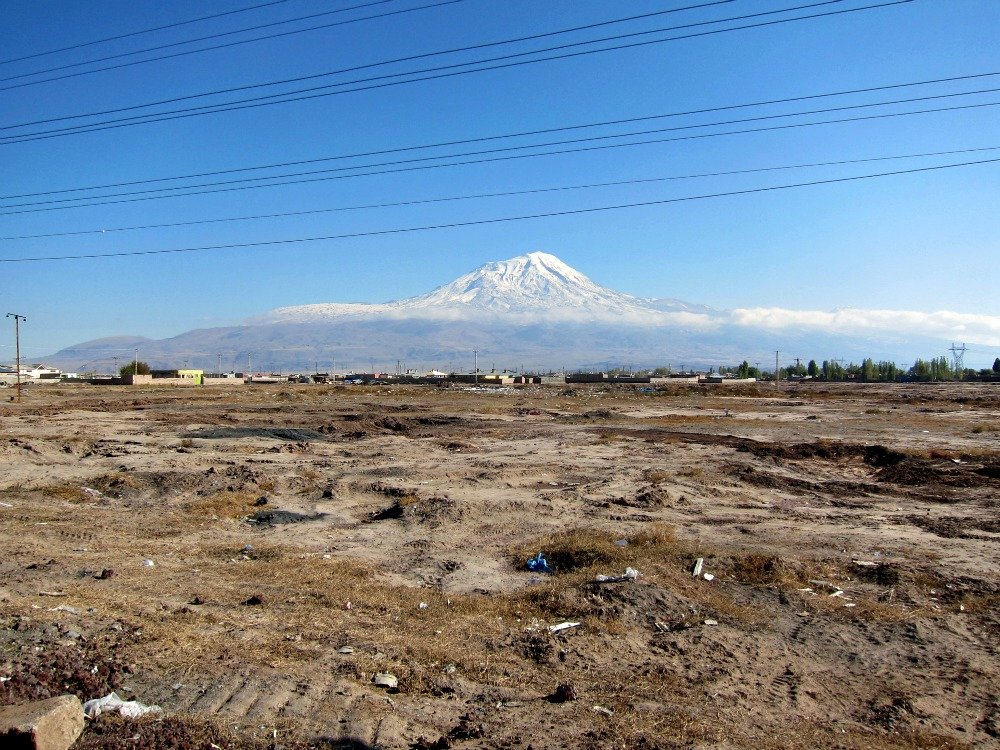 Here is a different view sans power lines and rubbish. 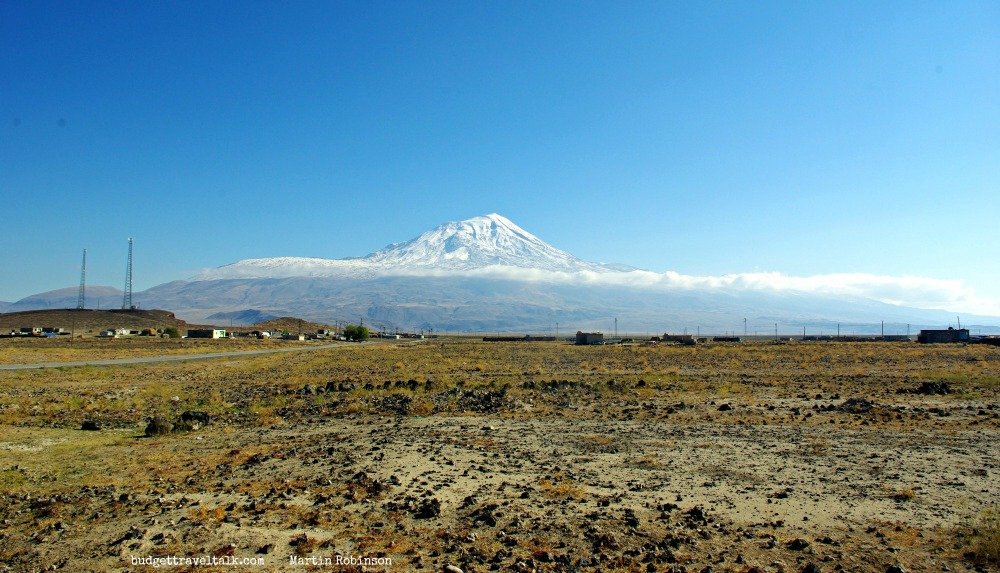 I can only imagine how bitterly cold the Winters would be and how exciting the Springs, living at the base of Mt. Ararat. 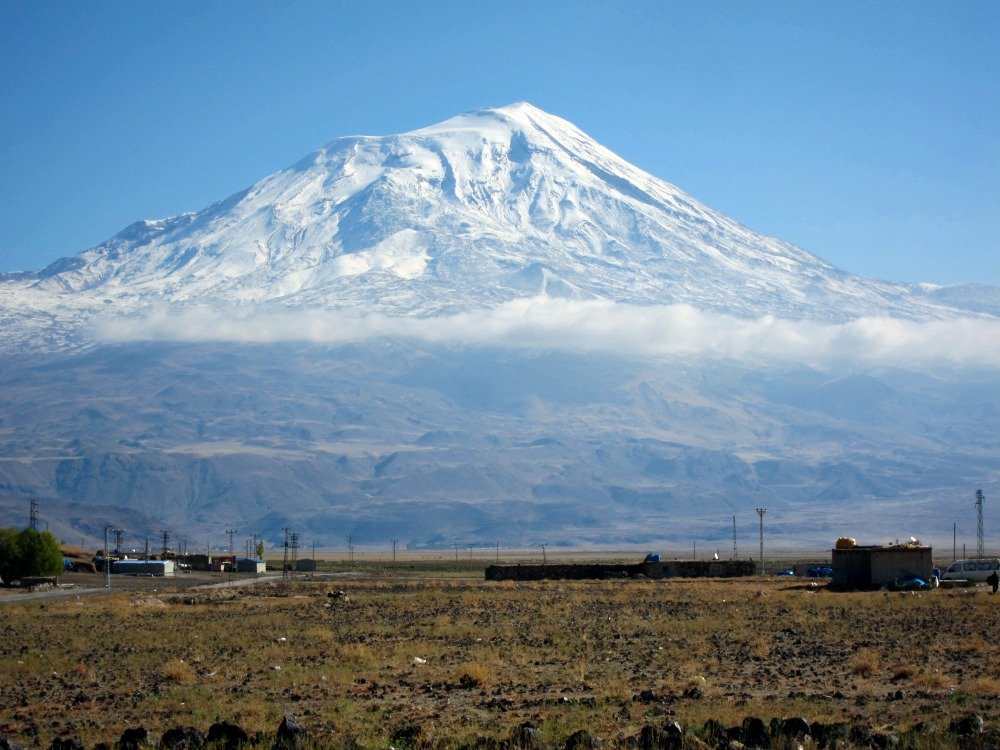 The plains of Ararat provide heavenly pastures for the livestock that are so important in Eastern Turkey. 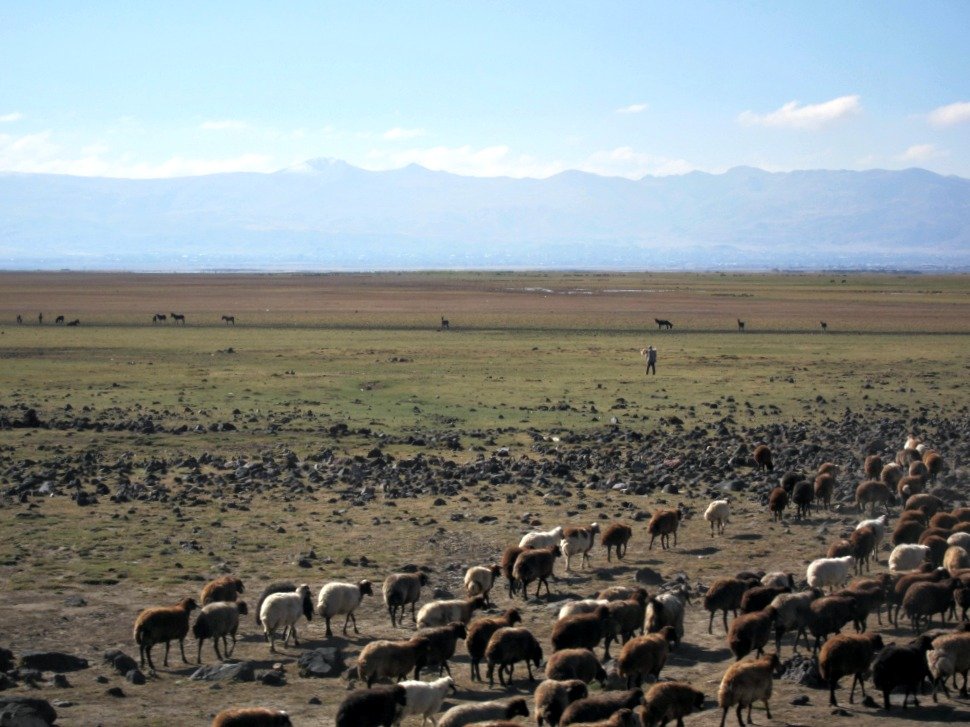 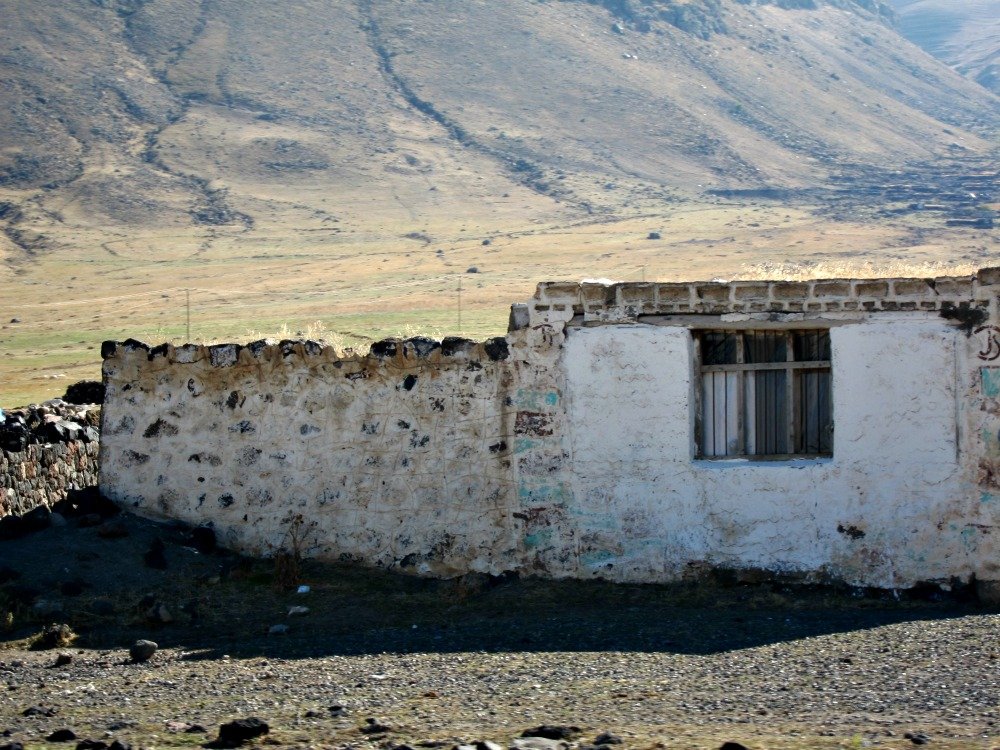 Another colour crept into the landscape and my files became littered with pretty pinks.

Although cows, sheep and goats had shared the roads with us in many places on this trip, the size of the herds and flocks ballooned between Dogubayazit and Kars.  The burly dogs seemed to be for protection purposes only and did not play a part in handling the sheep.  They were totally disinterested in proceedings whenever we saw them. 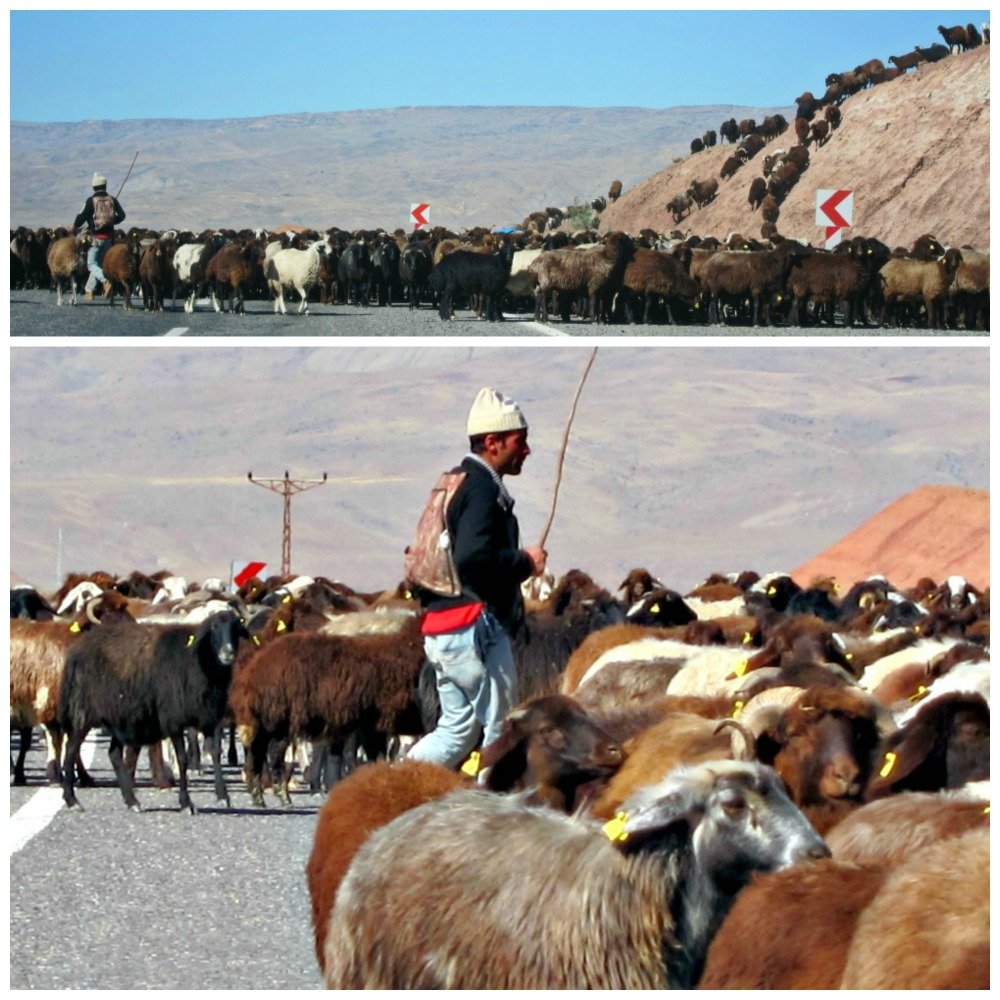 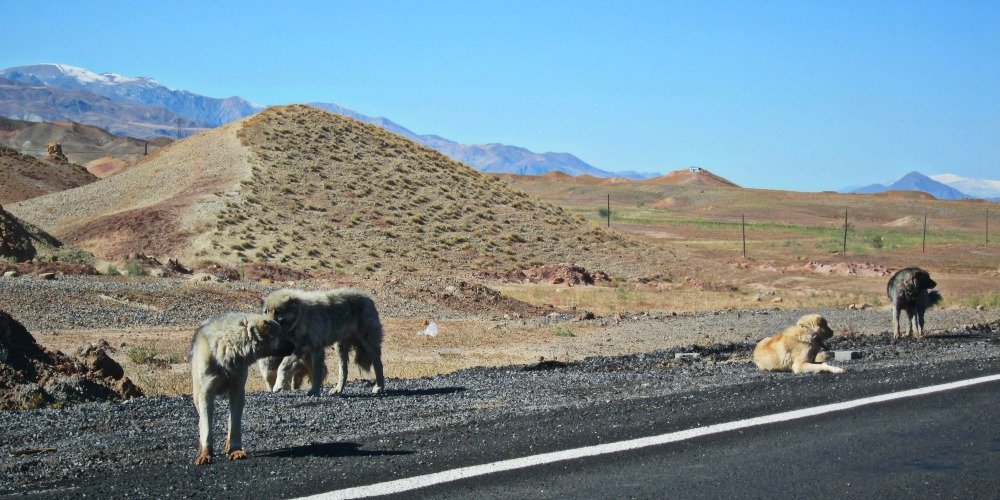 Stay with me, I am not finished with those fabulous pinks yet. 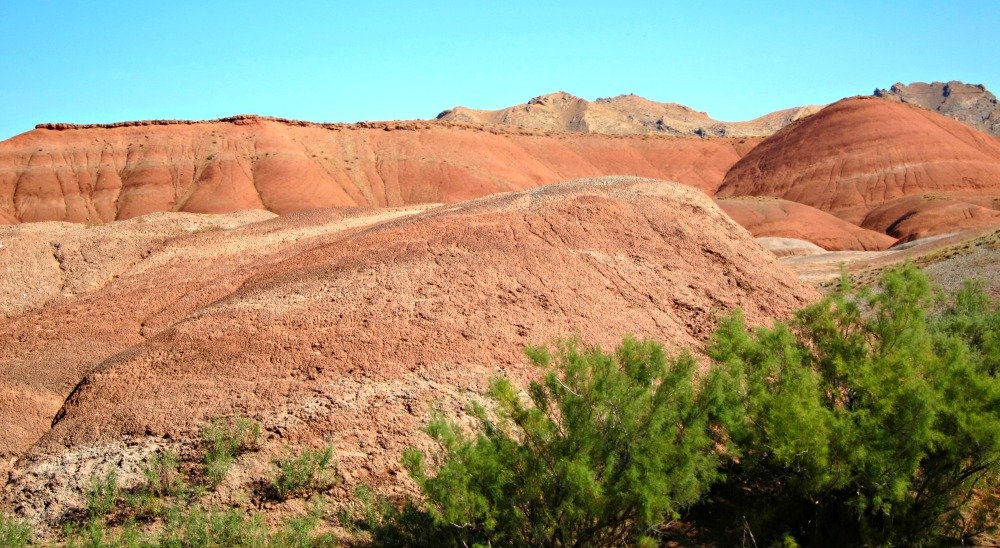 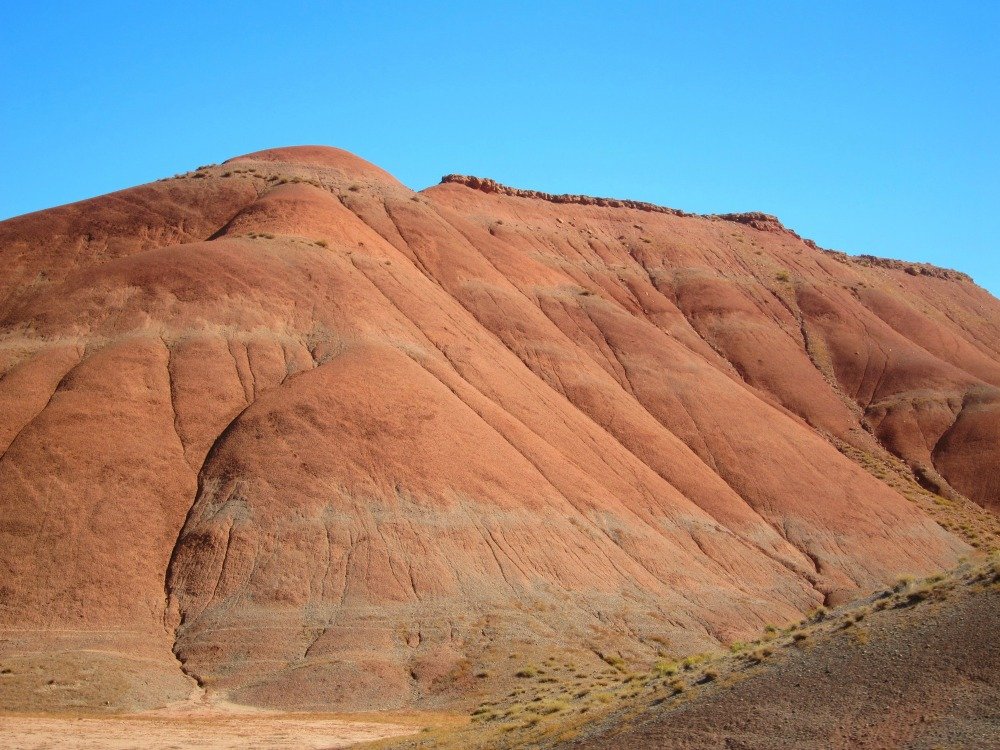 We were looking across to Tuzluca where salt is extracted from caves.  Slabs of rock salt were stacked for resale on the kerb side in Horosan and Kars but Tazluca was the source of the salt.  There were no tours of the mines as such, but if you are up for the challenge you could just go on in like Julia and Barry from Turkeys for Life.

Not long after Tuzluca the road curved East and there popping it’s head up again was Mt. Ararat.

Approximately 25km both sides of Tuzluca the road abuts the Armenian border.  Turkish Soldiers on patrol and atop look out posts were a common sight on the drive.  One minute after we left the sheep on the road above we came across a devastating single vehicle truck accident, where soldiers were first on the scene helping out.

Finally there was nothing left between us and Kars apart from some obligatory roadside cattle.

Our route took us through Igdir, which seemed like a pleasant town but we did not stop and I took no photographs. I know.  Hard to believe.

You could say I made up for that by taking twice as many of Kars.   Here are some not previously published shots.

Kars has a busy end and a quiet end of town.  Any street that ends with a view of the castle is a busy street.  I like this photo of Marty’s because it captures the vibrancy of the people and town. 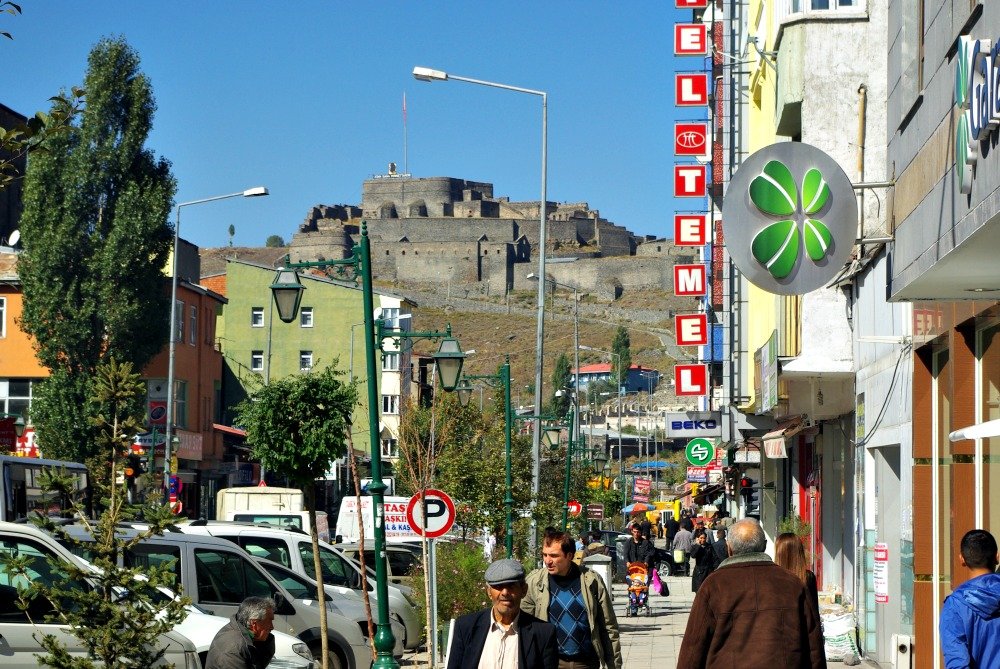 The sleepy end of town houses stately buildings that hark from the Russian occupation.  They are painted in pastel tones with a shabby air about them.  A beautiful and peaceful walk. 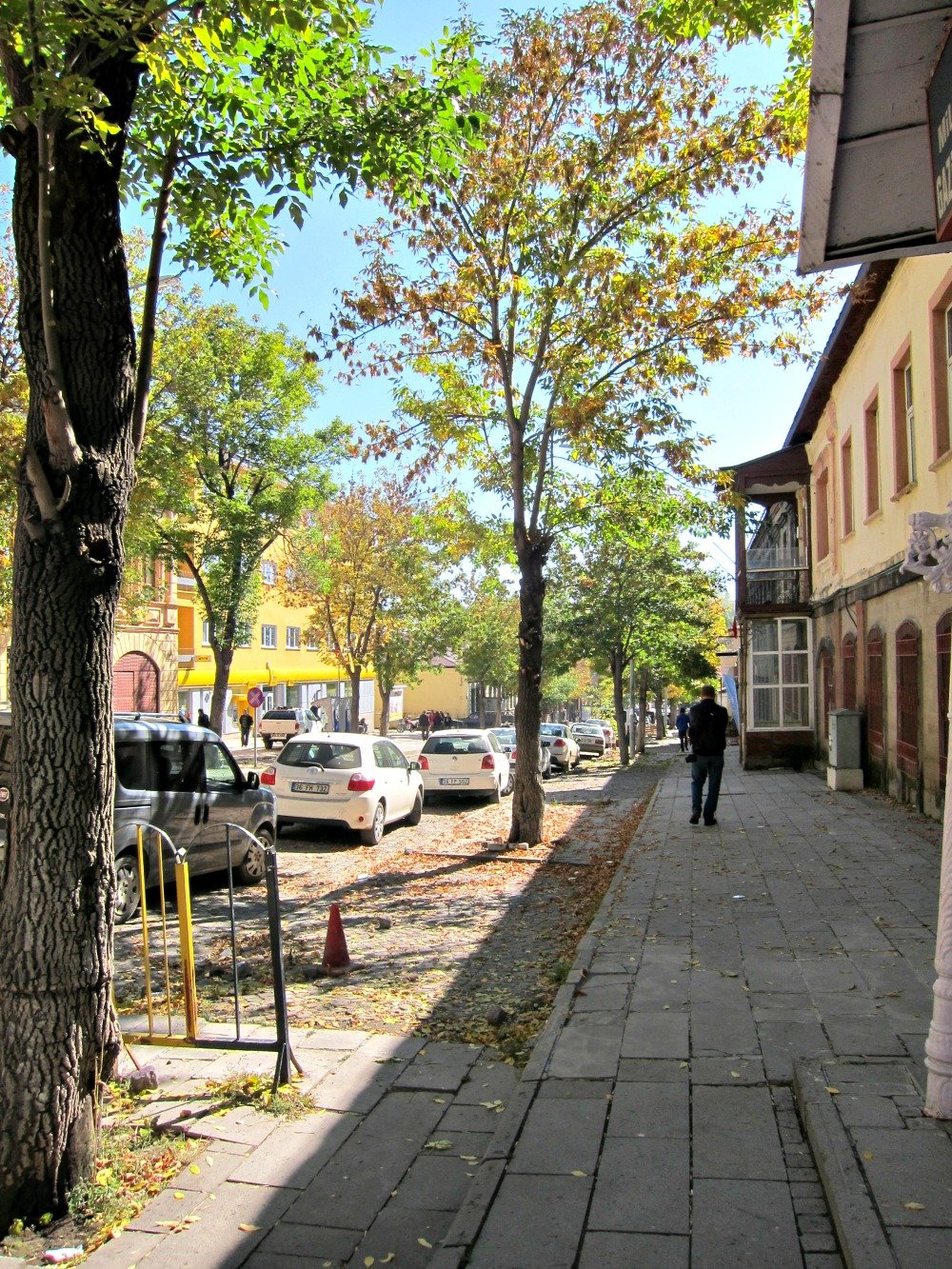 The Gazi Ahmet Muhtar Pasha Mansion, an example of late Ottoman architecture is at a crossroads.  This building was used in 1877-78 as a headquarters in the Ottoman Russian War and was restored in 2001.

The pace starts picking up around here with the Antik Cafe on the opposite corner. 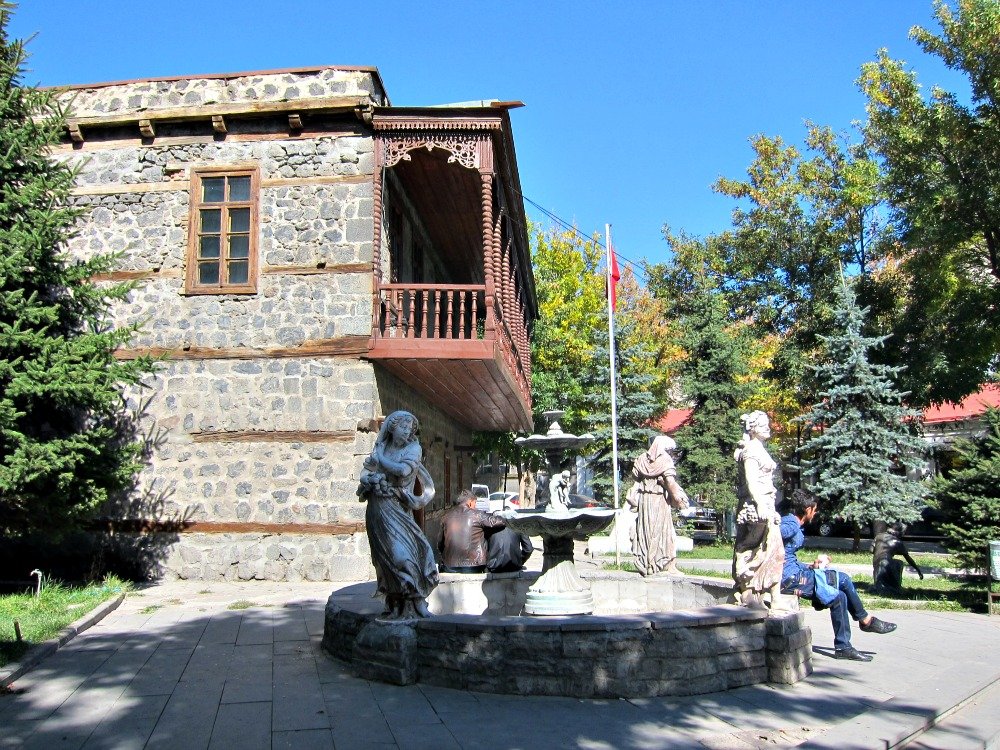 And finally an example of a more recent style of building in Kars. 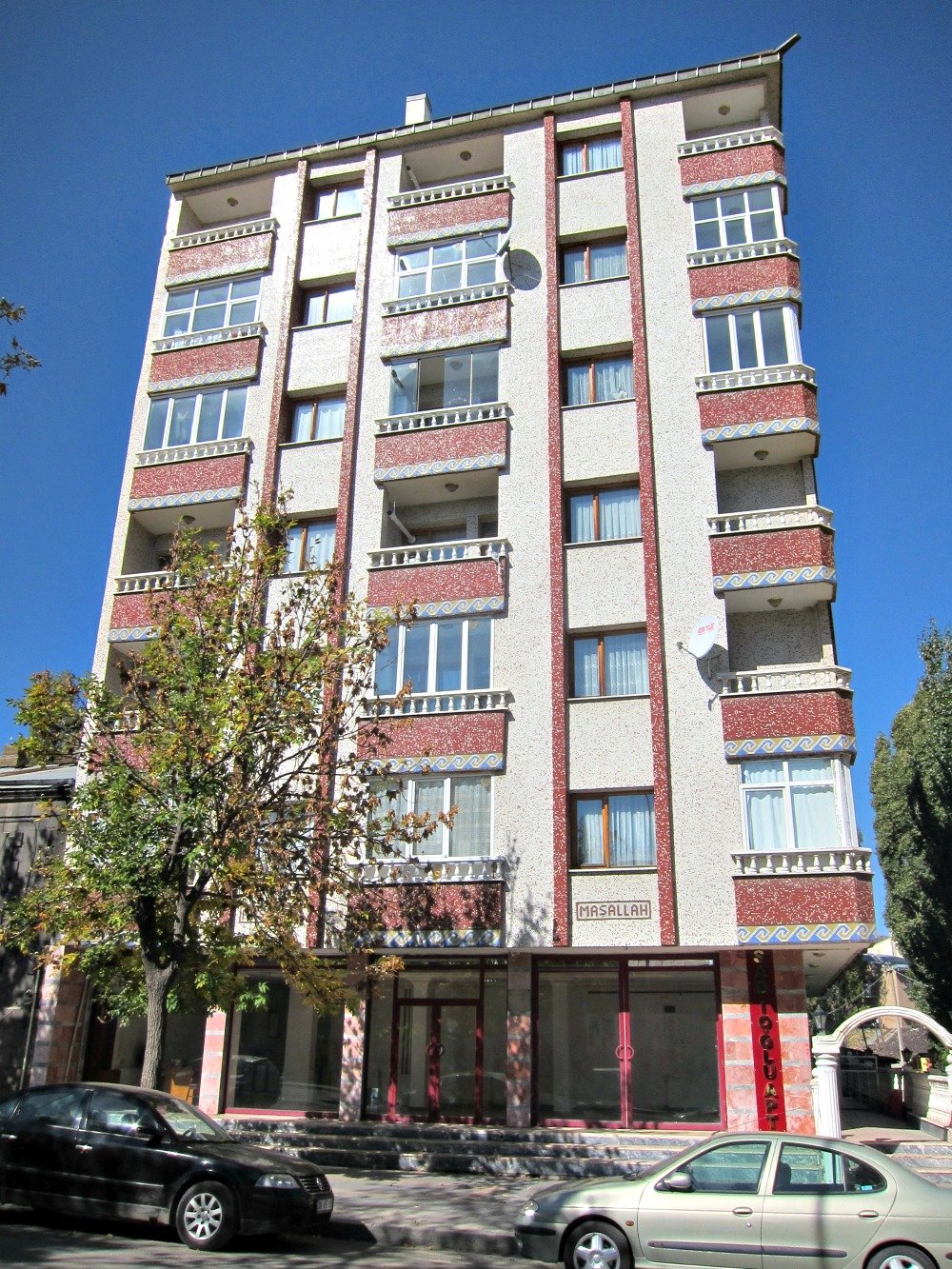 Read About our Eastern Turkey Self Drive Itinerary here.

If you have  ever dreamed about packing up, leaving your own country and shifting your family to the other side of the world, you should check out Chasing the Donkey. 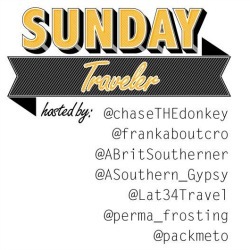 Tuesday in Townsville Ocean Views and Sunsets
Next Post: Surrounded by Cows at Ani