Driving in Sicily can be challenging. Much to my dismay as chief navigator, I discovered how easy it was to become lost, even when using a GPS as well as a paper map. Keeping in mind that trips can take much longer than anticipated, it is a most enjoyable way to explore and reveal this scenic southern corner.

What is Sicilian Baroque Architecture?

After the destruction of the 1693 earthquake, which saw the south-eastern corner of Sicily devastated, entire towns were rebuilt in a new and distinctly Sicilian brand of (Roman) Baroque architecture called Sicilian Baroque. Some features to look for are grotesque masks, iron-worked balconies, columns and concave facades. 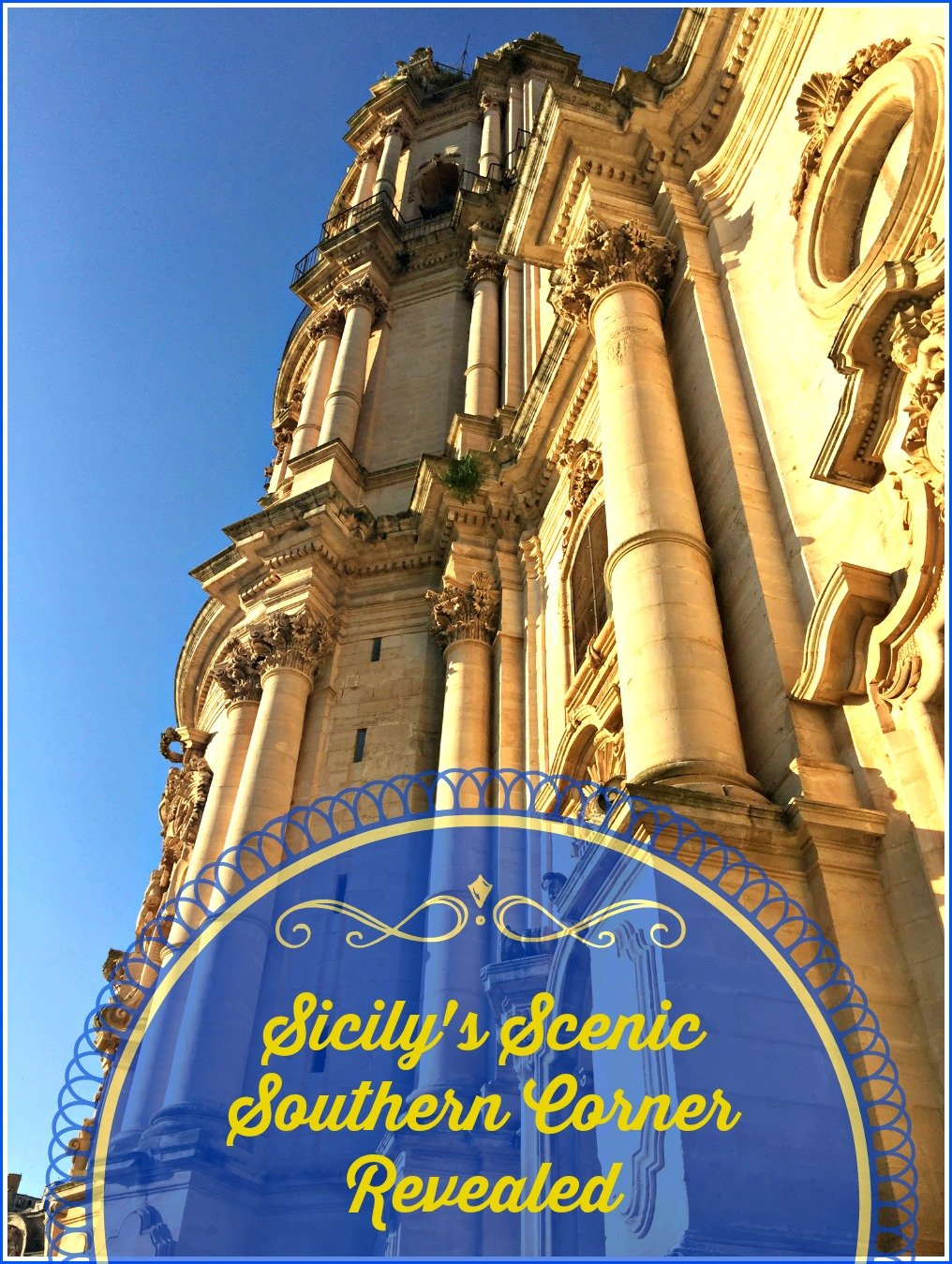 Modica makes a great home base for a driving holiday. It’s lively streets are a pleasure to return home to after a day travelling. With the car safely parked street-side we enjoyed a relaxing walk downtown each evening after an Aperitivo on our 8th floor balcony, of course. 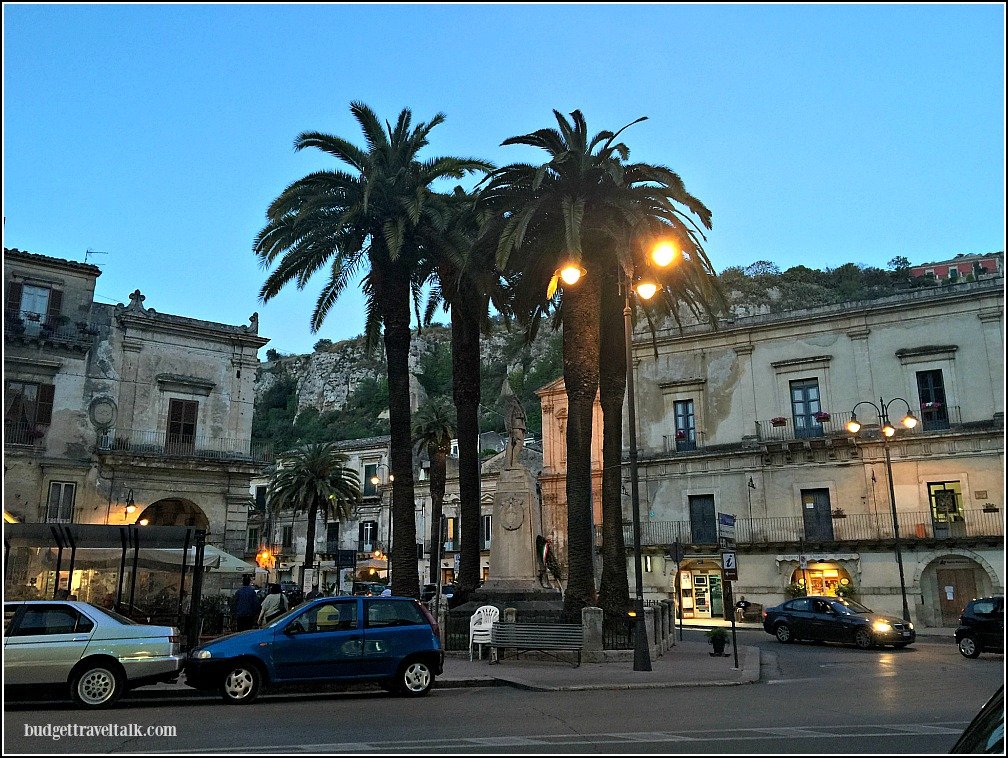 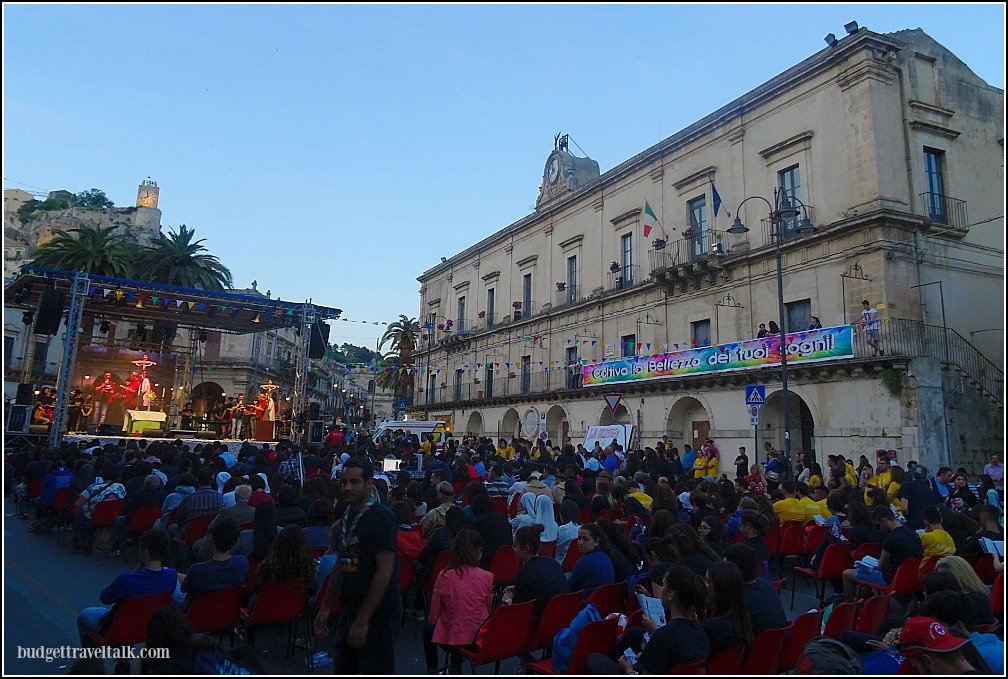 With the main street blocked off, traffic basically ground to a halt. Imagine a stage full of young people playing music and singing, soccer balls flying through the crowd, priests in full regalia and you’re half way there. Fill the rows of chairs to capacity, double the normal Passegiata crowd, add a ton of gelato and the scene is complete. Sicily continually staged such events for us to ponder over and enjoy. 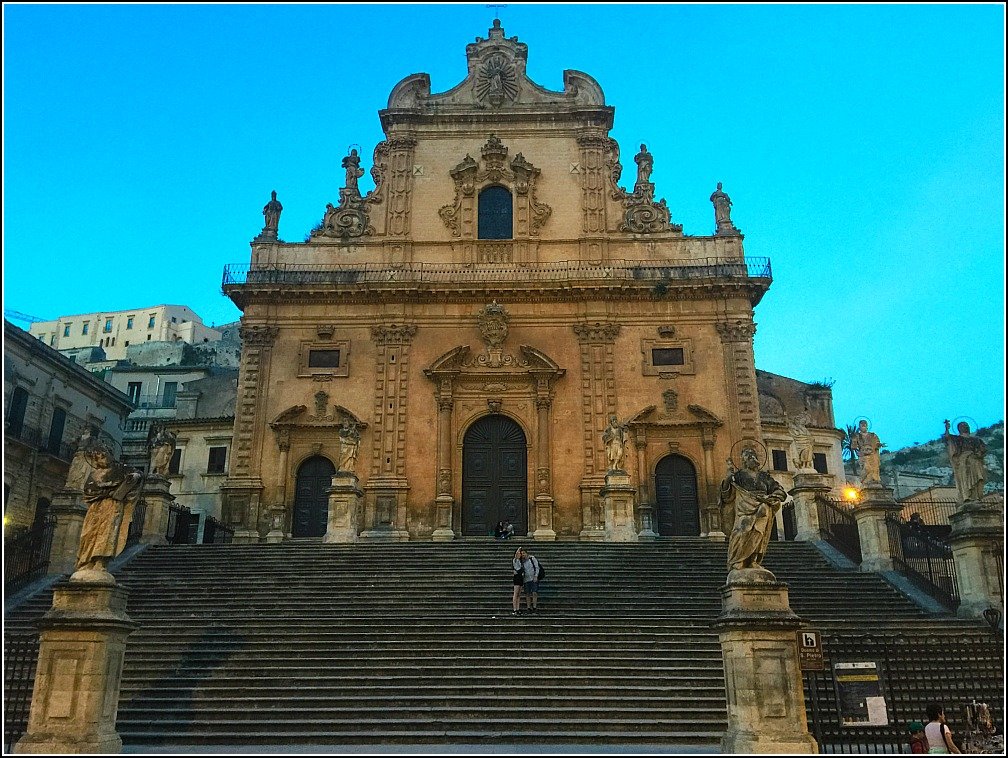 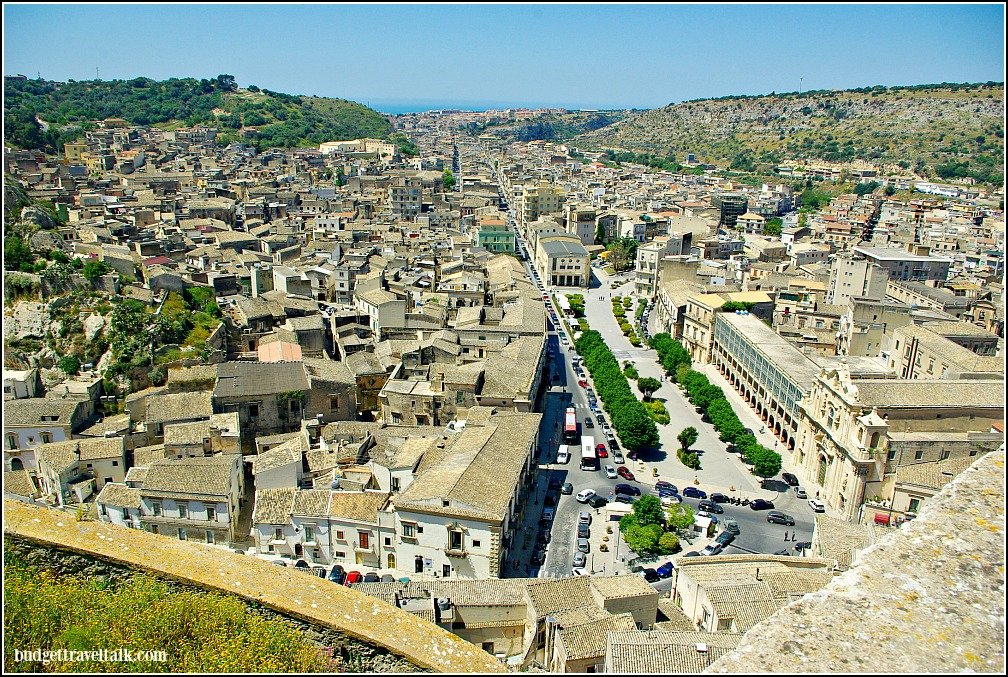 Scicli (pronounced sheek-ly), is one of the lesser known baroque towns and at 10km, the closest to Modica. Unlike Noto to the north, Scicli’s baroque buildings are spread around it’s Piazzas, Quarries and Hills. The three tourist information points were closed during our visits, but the friendly waiters at Cafe Plaza Busacca, supplied us with a map. 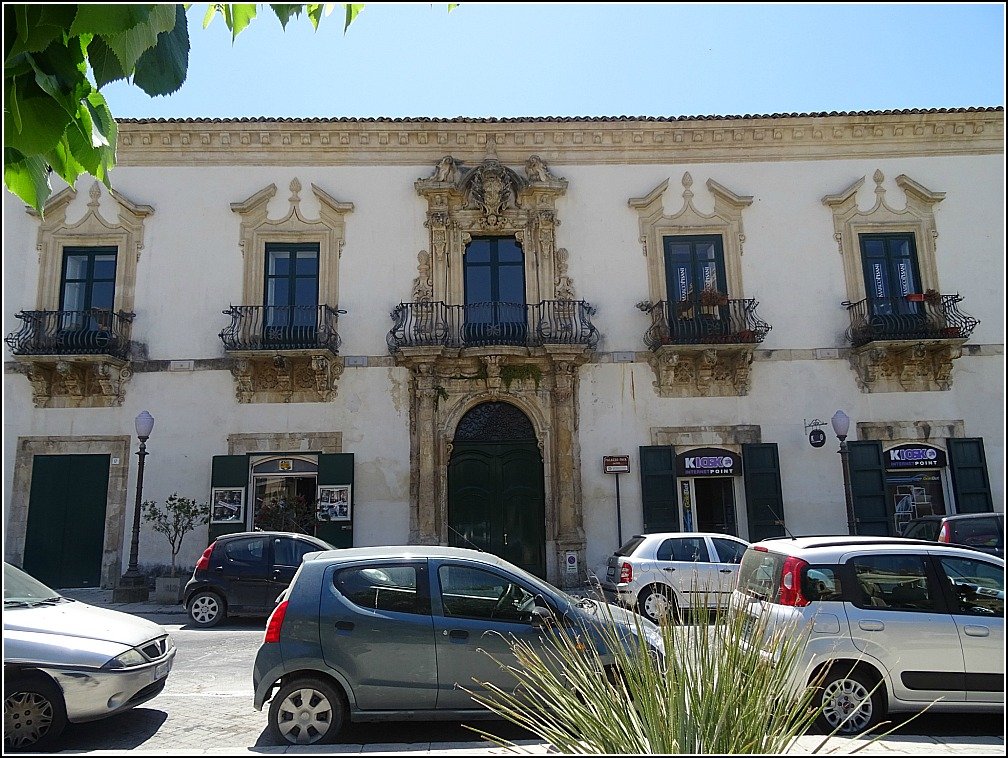 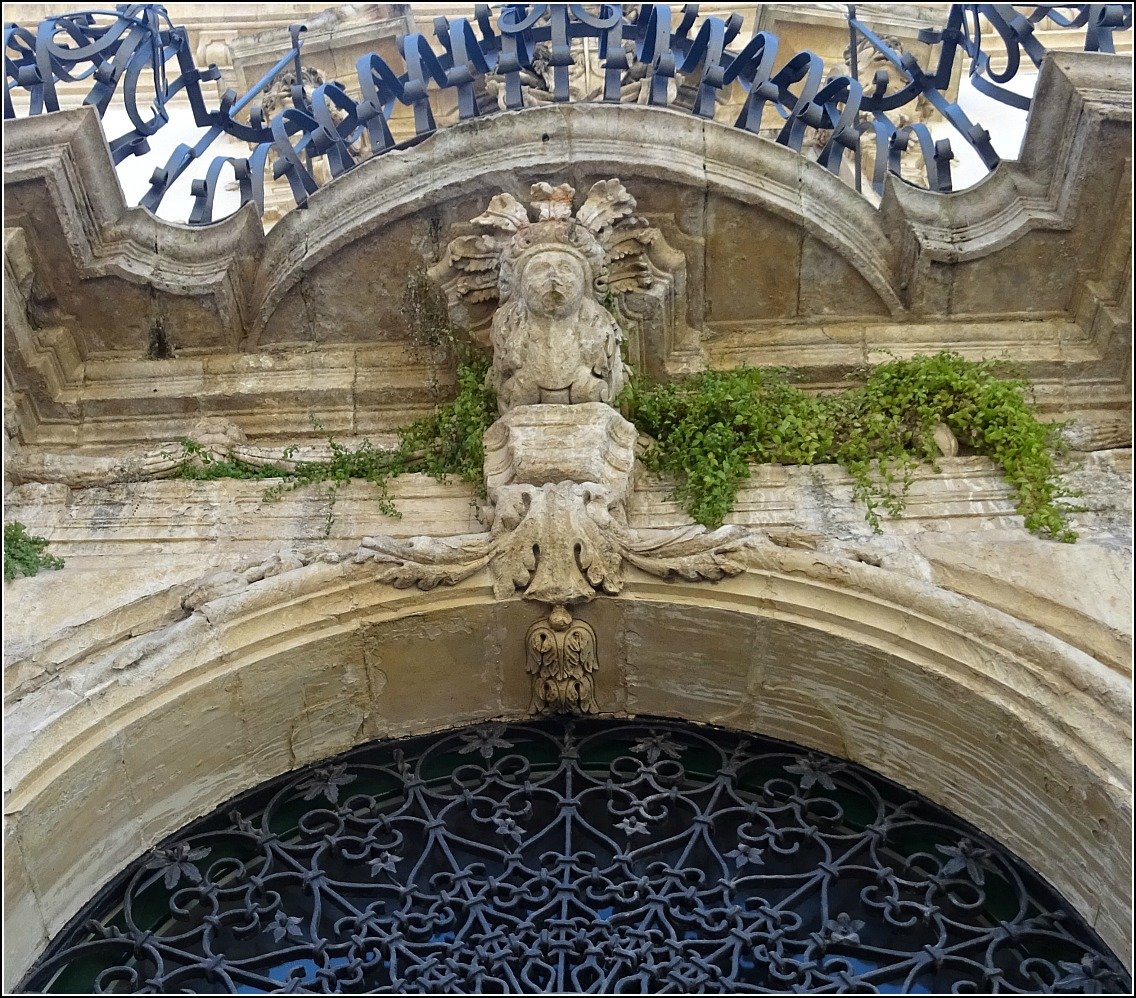 The climb to the hill top Church of San Matteo, should top any Sciccli itinerary, for it’s fabulous views alone. While we were in the tiny museum en-route, a recording reminiscent of a Turkish call to prayer, floated up from the streets below. After some thought the museum attendant explained it literally as “the market itinerary for the small car”. Bouncing ideas off each other we decided this translated to a mobile greengrocer. What we thought to be a Call to Prayer was in reality a Call to Buy. 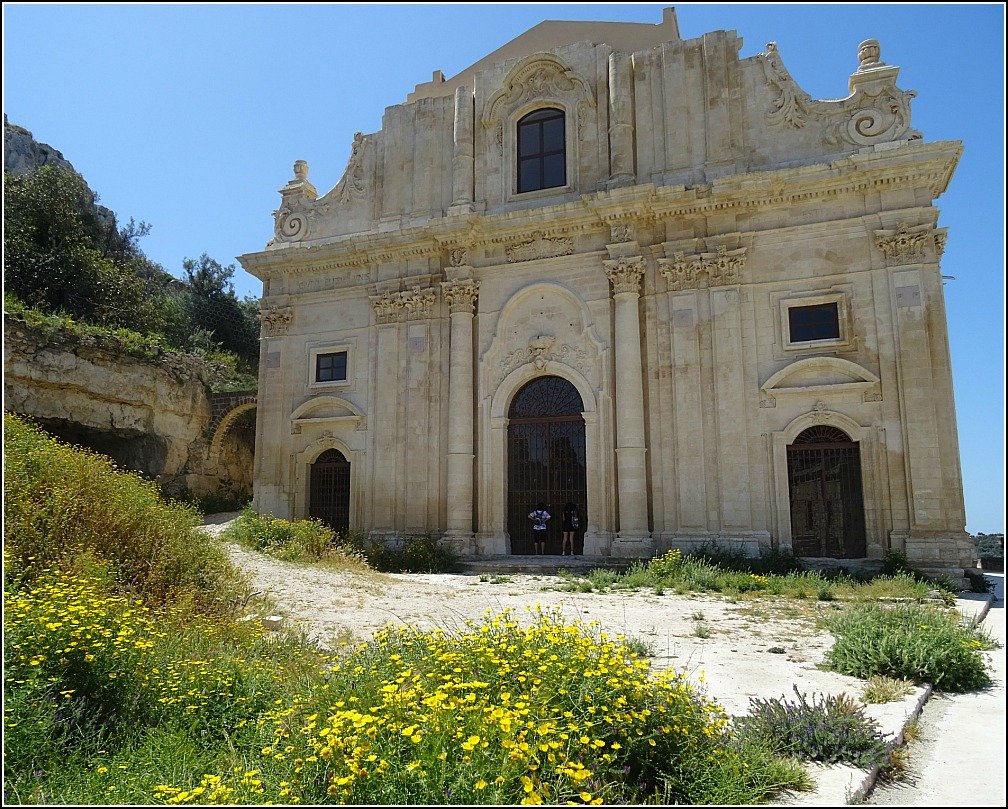 The Church of San Matteo, named after the town’s patron saint, lies toward the top of the hilly gorge where historically locals lived in their cave homes. When the final cave residents were relocated to the lower town in the 1950’s, the fate of San Matteo was sealed. Today it is stripped bare, the entrance door replaced by a glass covered security screen. The path continues onwards and upwards behind the church, extending what is a pretty spring-time climb with opportunities to explore side paths before a gate finally bars the way. 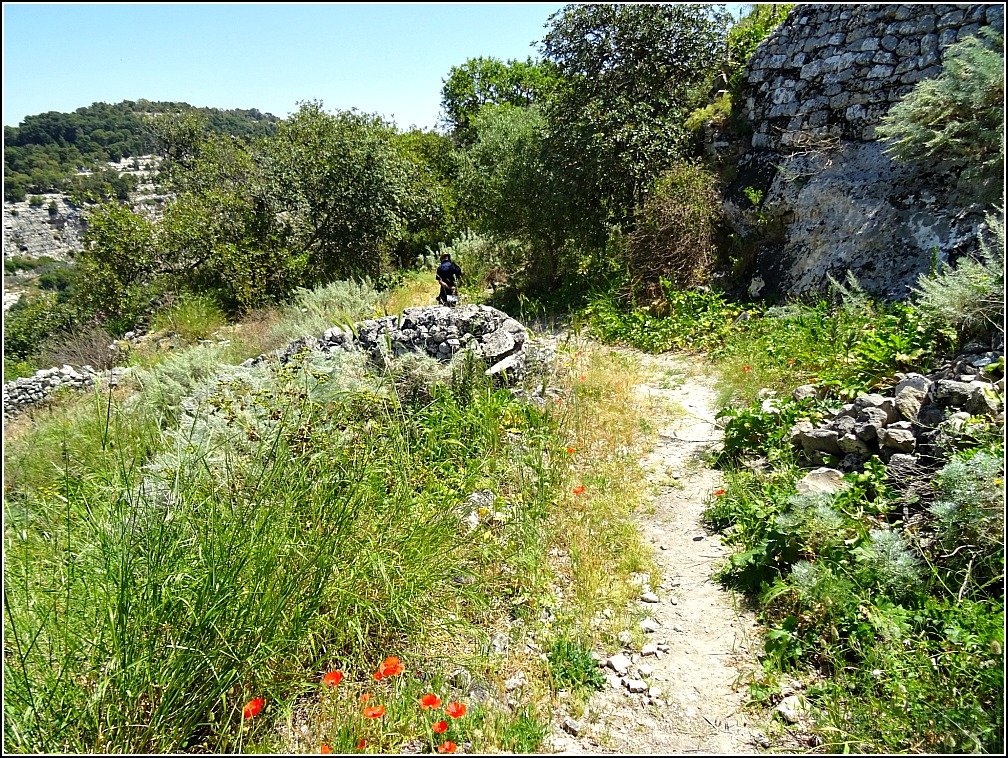 With it’s grand array of Baroque architecture, Noto is a top tourist destination. The facade below is one of my favourites. 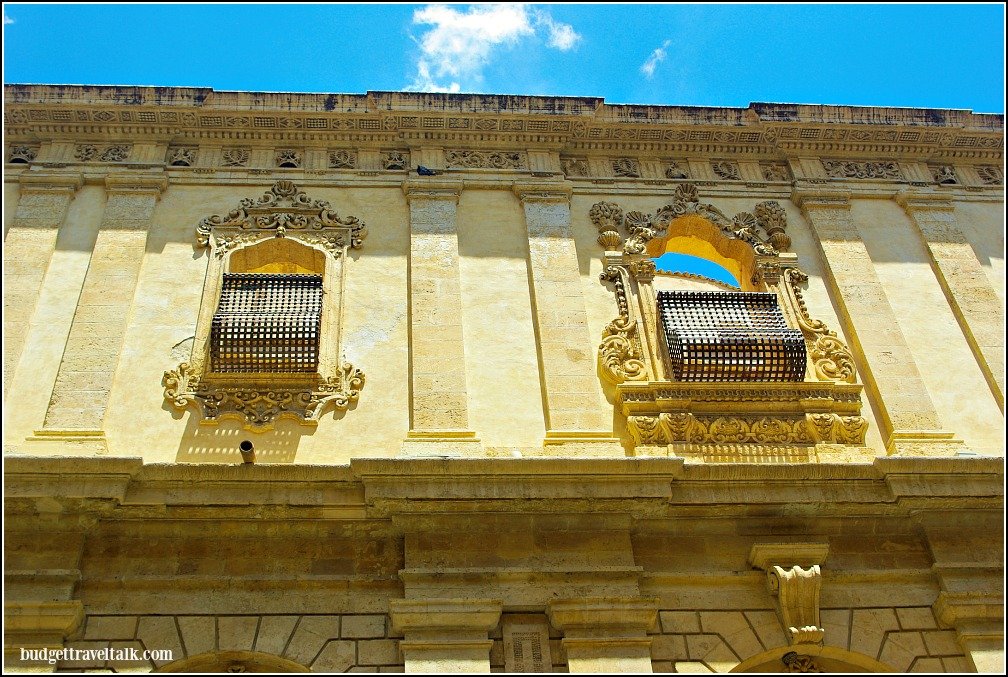 Noto lives in my memory as the first Sicilian town where our GPS actually directed us to our destination. When the little red arrived flag appeared on the screen I was astounded. It was in the main street, Corso Vittorio Emanuele, that the butcher at Tesol Salvatore Macellaria, fed us chunks of cured pork and fennel sausage while we waited to be served. We enjoyed the jovial atmosphere in the shop and later turned the sliced Porchetta into a picnic at the other end of the Corso where it terminates in a park outside the city gates. 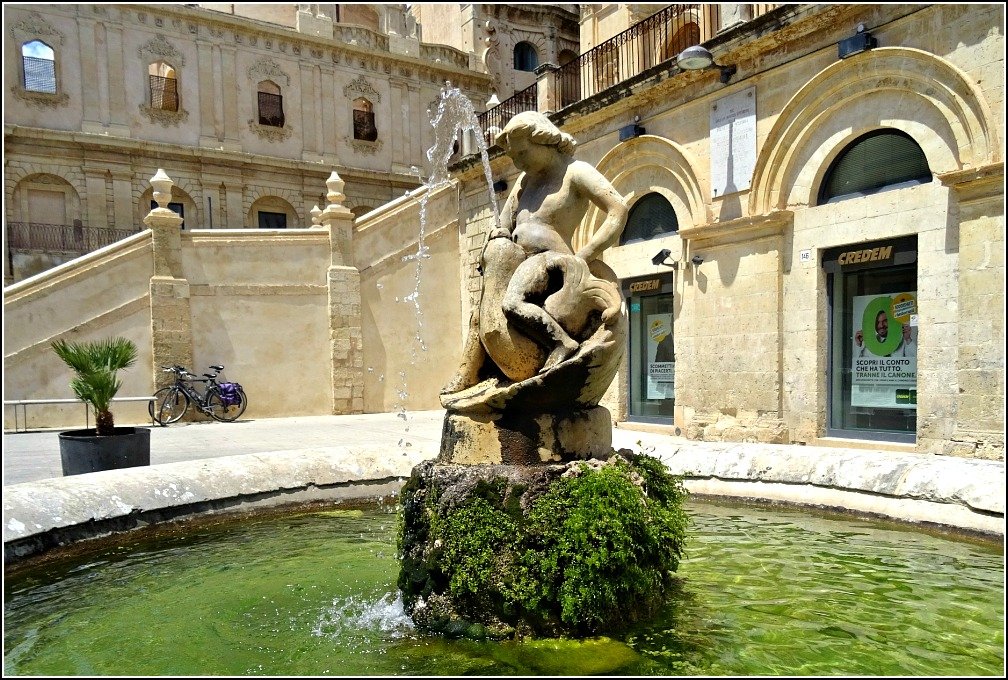 The post-earthquake Noto was built on a new site 16km from the original city. It was a town planning triumph with streets laid out in parallel and the course of the sun being taken into consideration in the design. The new build was of local honey coloured Tufa, which takes on a special glow in the afternoon sun, but was stunning even at mid-day.

A stroll along the full length of Corso Vittorio Emanuele is an easy way to absorb the Baroque atmosphere, not forgetting a detour along Via Nicolaci to Palazzo Villadorata and the buttresses of scary faces and cherubs. I always like to retrace our steps, to view things from a different angle. Unfortunately the Cathedral was closed both times we passed by, even though it was meant to be open.

While we waited and willed the doors to open, I added perspective to the massive Cathedral doors. 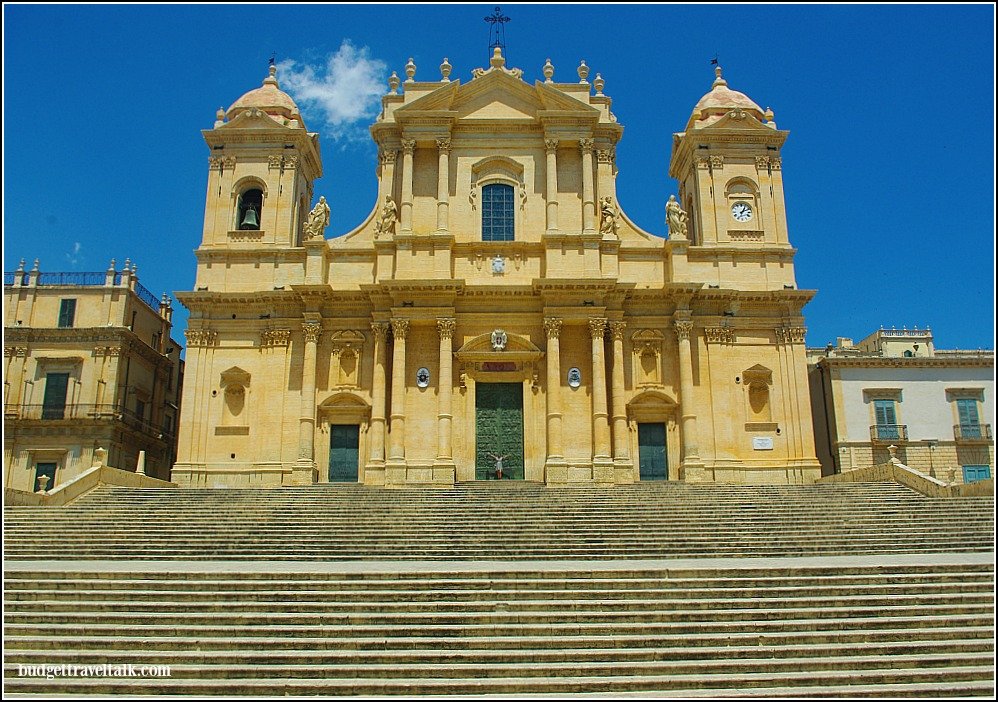 What better way to break up the barrage of Baroque, than to drive 47 km west of Modica to Scoglitti. 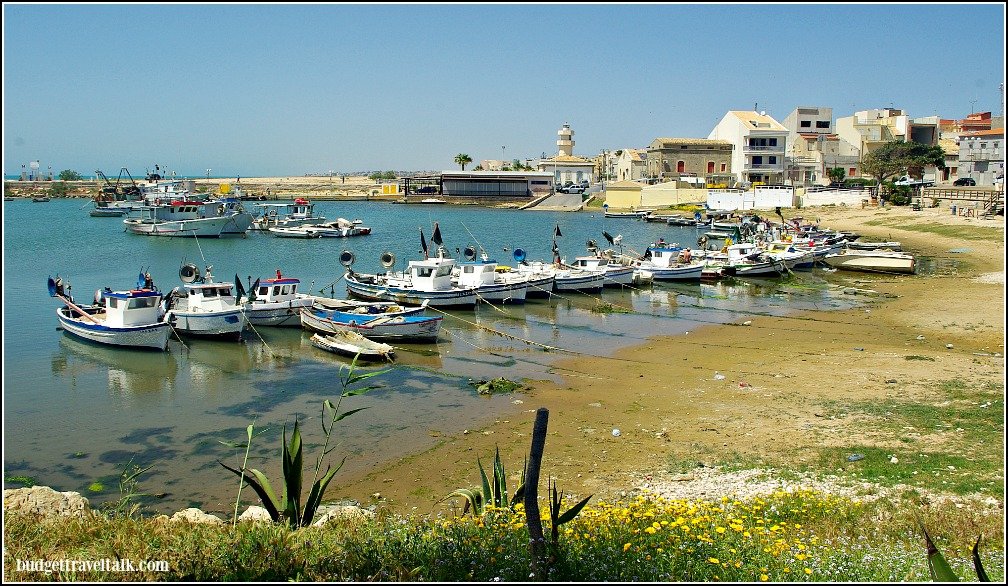 In early May this is a sleepy fishing village, but come August the crowds arrive for their summer seaside break. A short walk from the quaint working harbour is Il Skalleo seafood restaurant, a top dining suggestion from Jenny at A Taste of Travel blog. 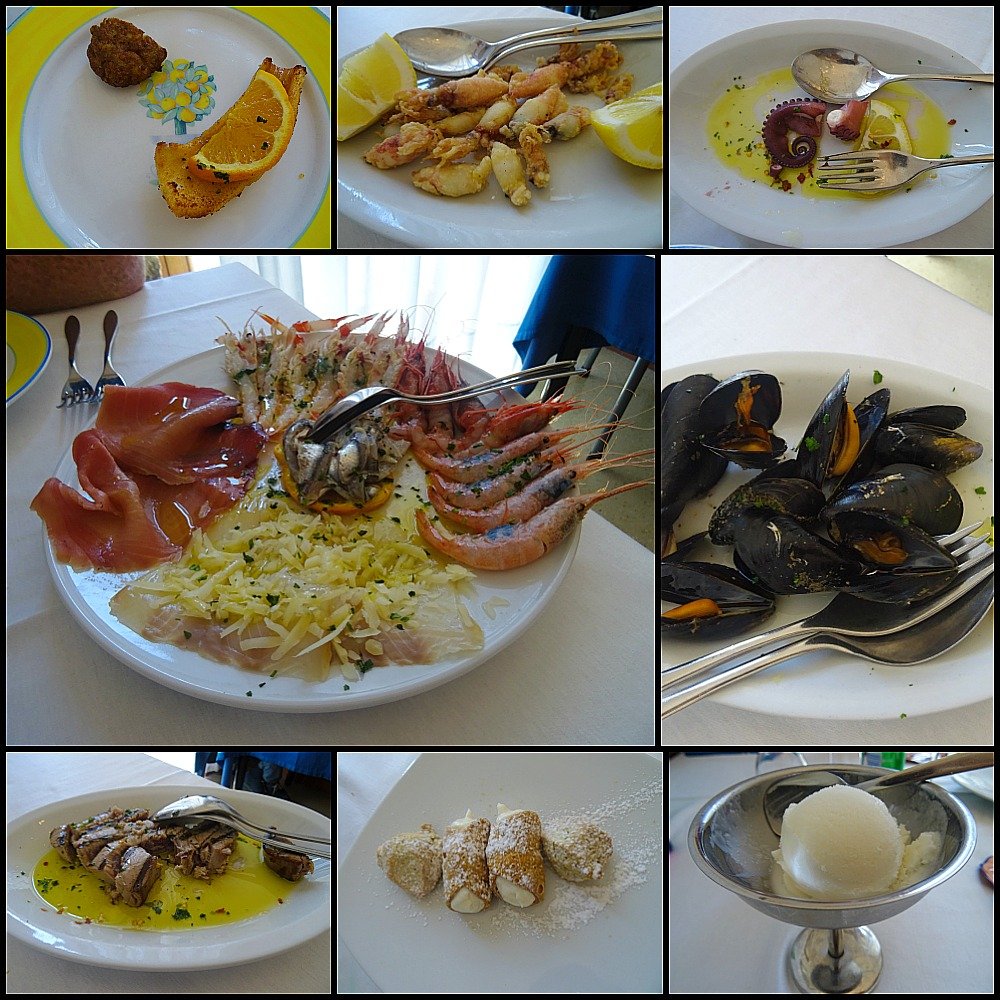 At 35 Euro each Il Sakalleo was a happy splurge for us. The quality of the seafood was superb and having ordered the Degustation Antipasti, the dishes just kept on arriving. This proved to be an excellent ploy to try everything without having to order individually. The meal kicked off with a platter of raw prawns, scampi, sardines and two thin fillets of fish. After a short mouth watering discussion and a sip of wine, the cooked offerings started appearing. First came the cuttlefish rissoles and calamari with orange, then tiny crispy squid, rounded off with a succession of medium-rare Tuna, Octopus and delicately flavoured Mussels. Marty’s sweet tooth was soothed by the Ricotta cannoli, Pistachio & Almond biscuits and lemon sorbet. My glass of chardonnay, a recommendation from the waiter, complimented the seafood perfectly. Both the wine and Marty’s non-alcoholic choice were gratis. What an experience! 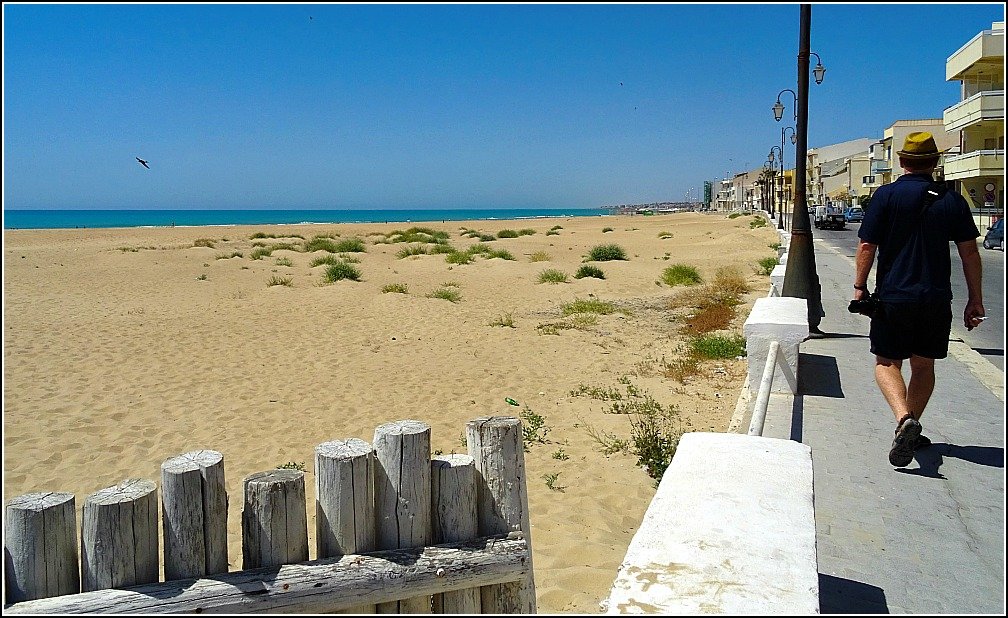 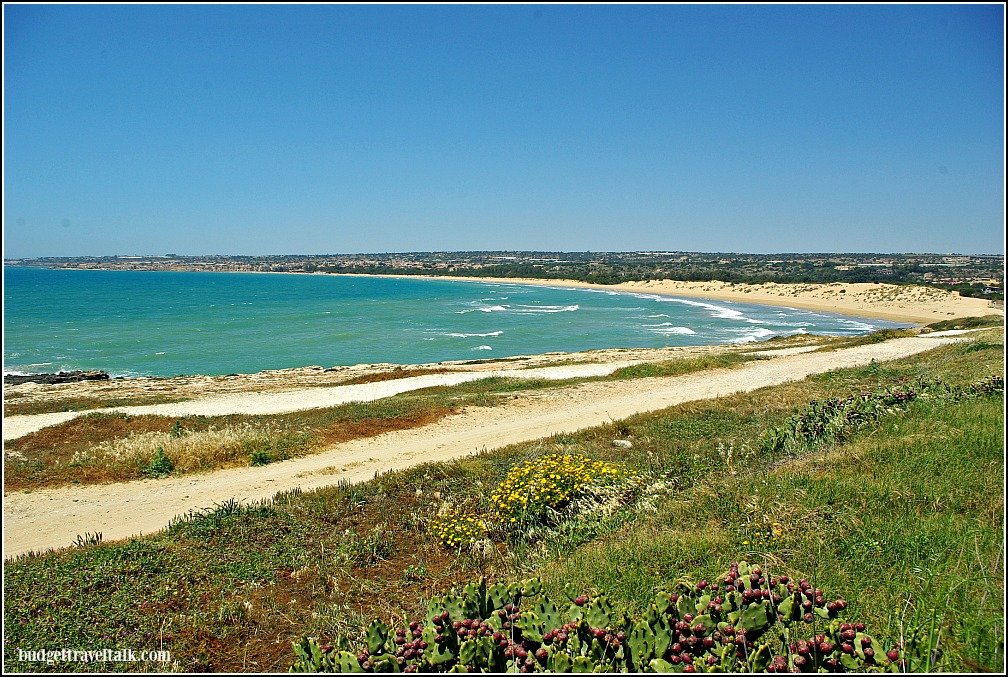 42 km east of Scoglitti and 25km south of Modica is the small beachside town Sampieri. Looking for a place to eat our home-made rice salad, we ended up east of town at a 2 km long sandy beach where low rock ledges drop away to blue-green water. 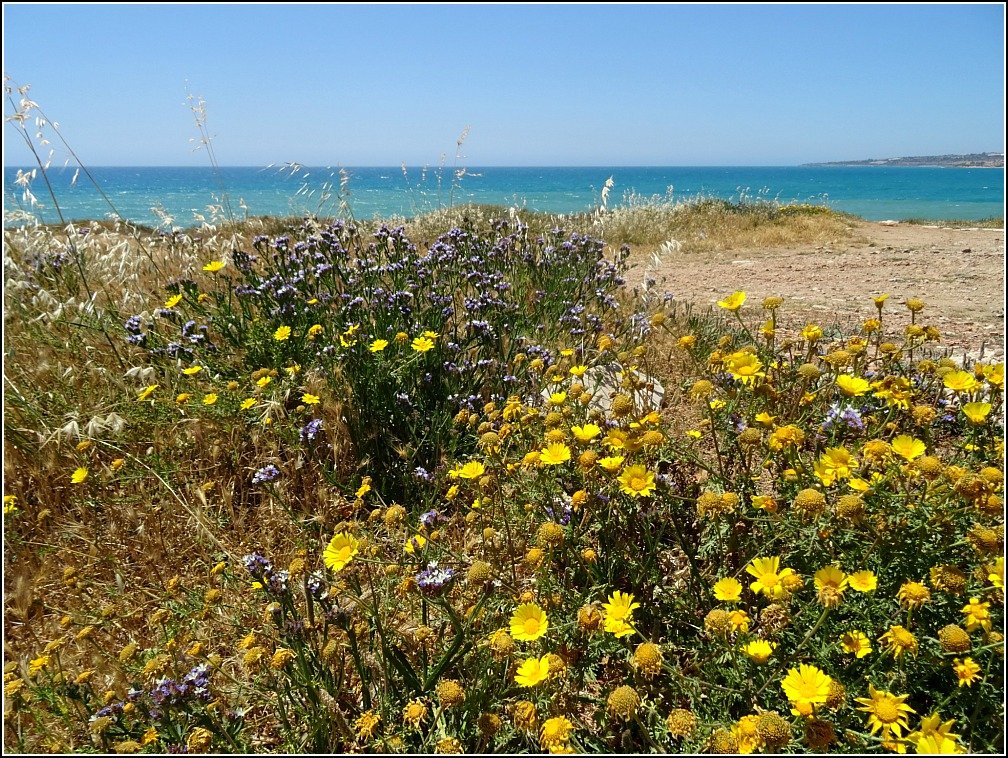 Immediately behind and through a broken down fence we found the partially ruined La Fornace Penna. Later research revealed that the bricks made here from local clay, were shipped all over the mediterranean from 1909 to 1924, before the factory was destroyed by arson. Penna’s bricks are credited with rebuilding Tripoli after the war of 1911. Referred to simply as the Old Factory, it has posed in the Italian Television Series Inspector Montalbano as a tuna factory. Interestingly that series is regularly filmed in Scicli. 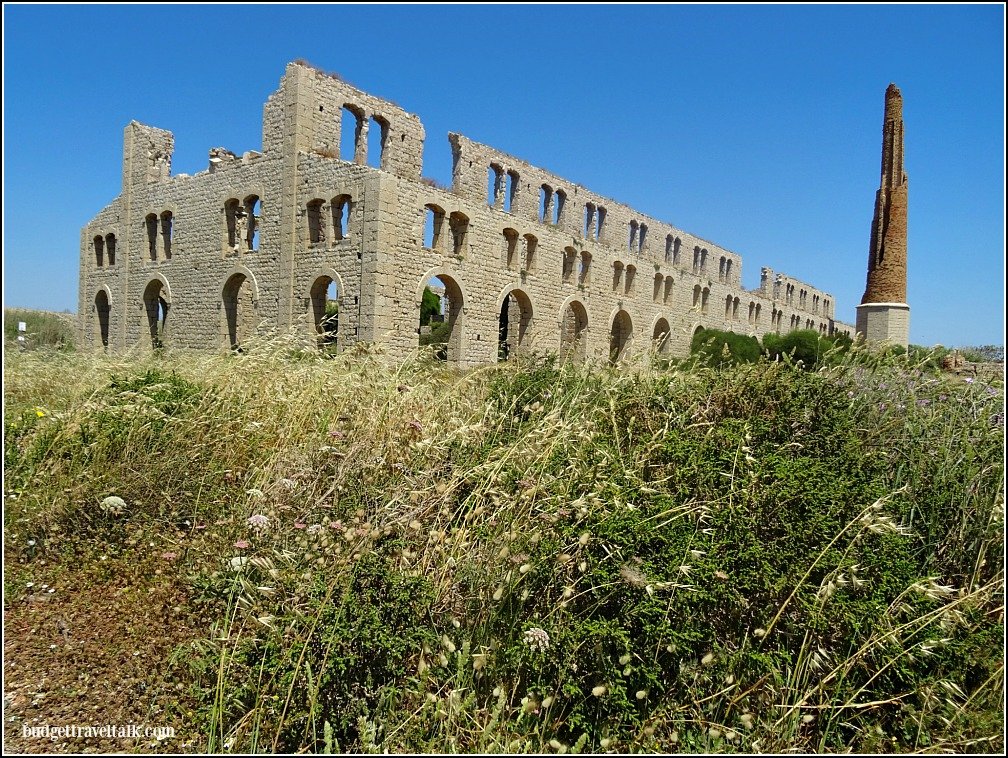 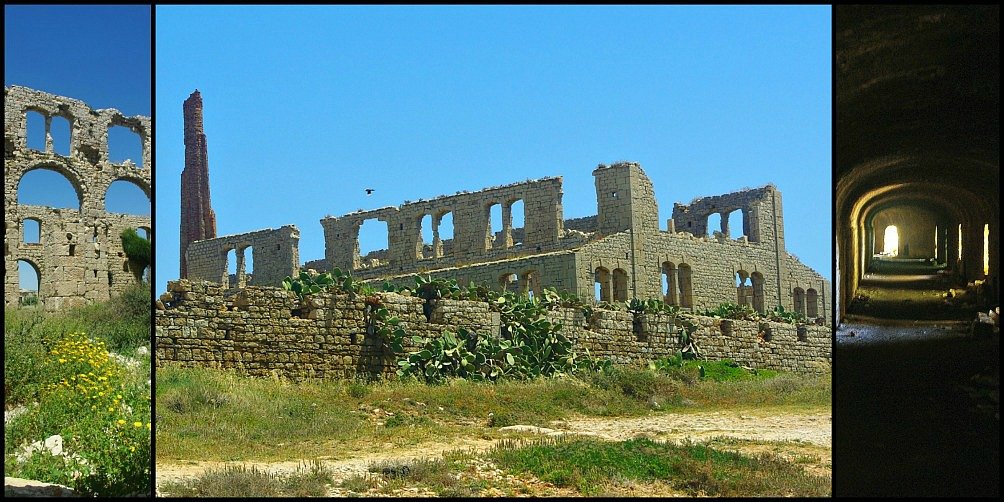 Driving in our usual haphazard way along the coast toward the seaside town of Marzamemi we found ourselves at Portopalo di Cap Passero harbour, discovering what we deduced to be an array of refugee or fishing boats from foreign shores. 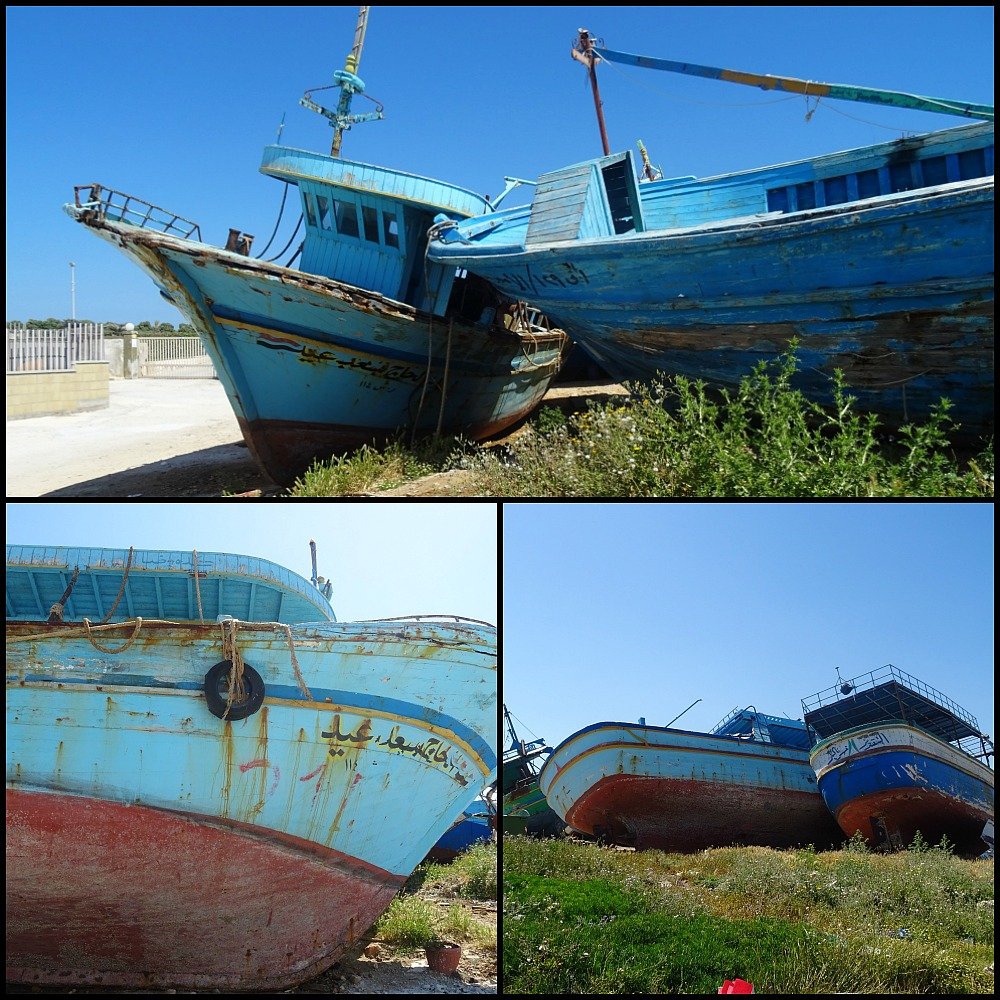 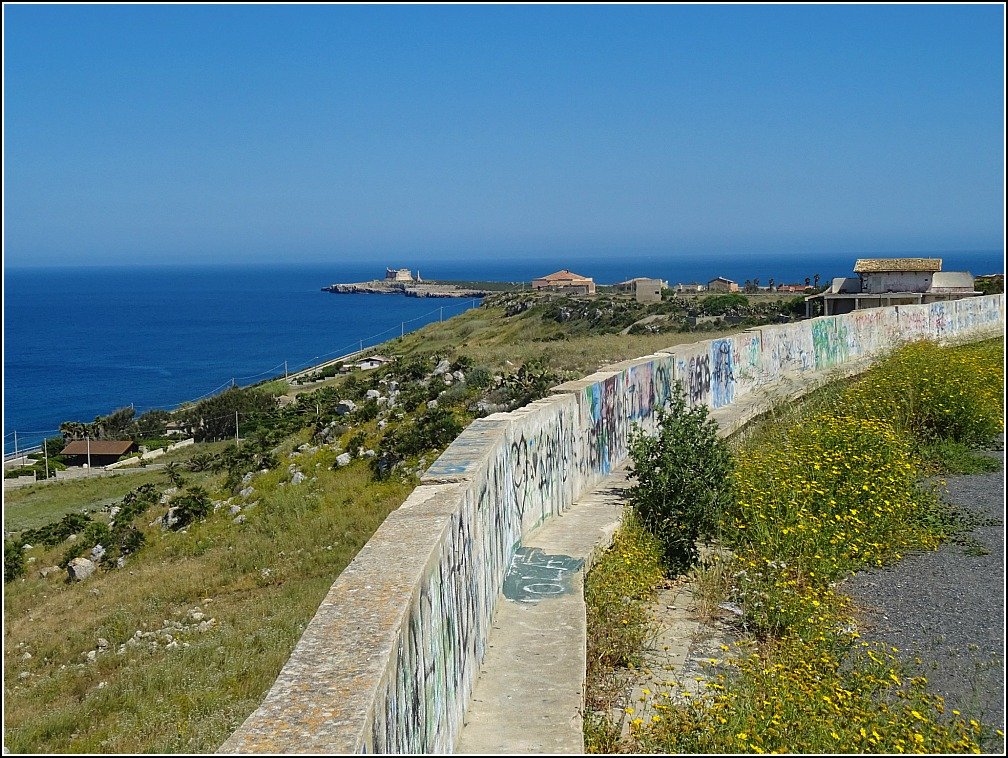 The old restored tuna factory built by the Arabs who founded Marzamemi in the 10th Century. 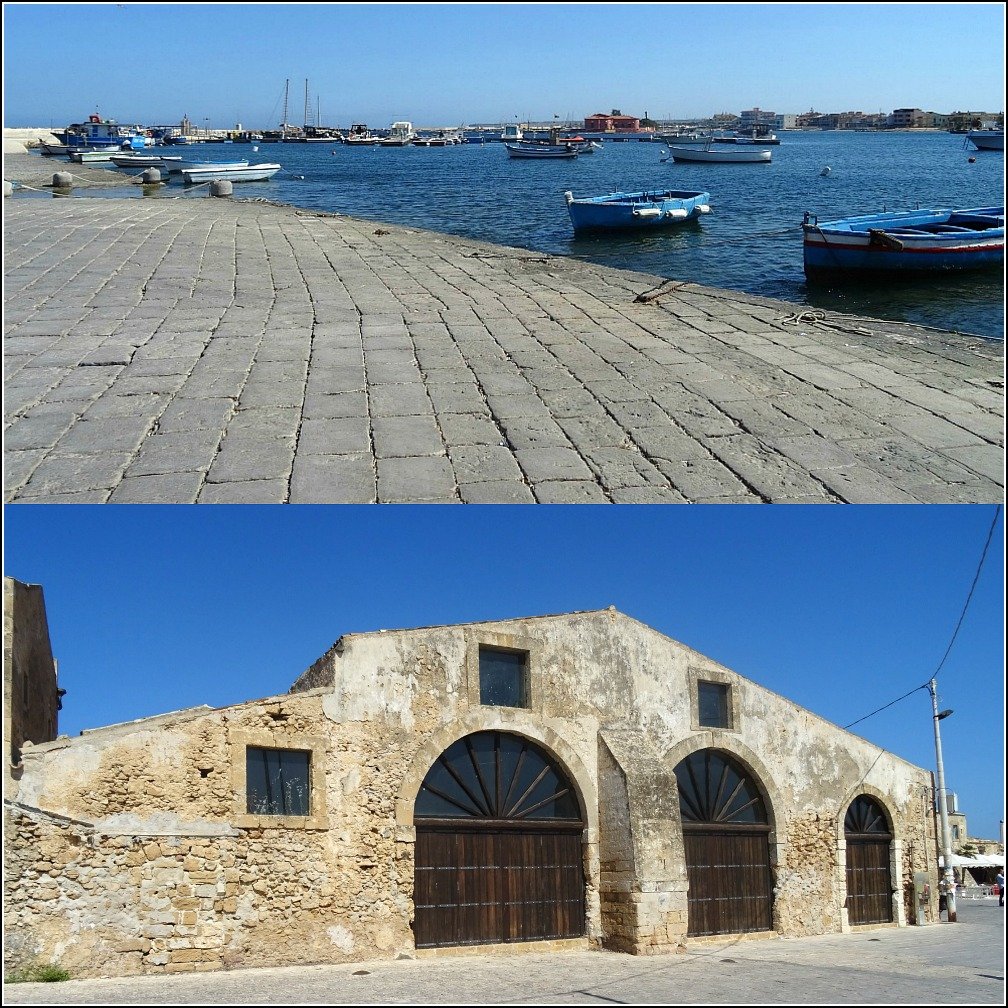 Although quiet in Spring, I can see Marzamemi pumping in July when International Film Festival movies are projected onto the walls of Piazza Regina Margherita. In August, thirsty beachgoers would be quenching their thirst at the sunny outdoor bars and restaurants of the re-purposed buildings. 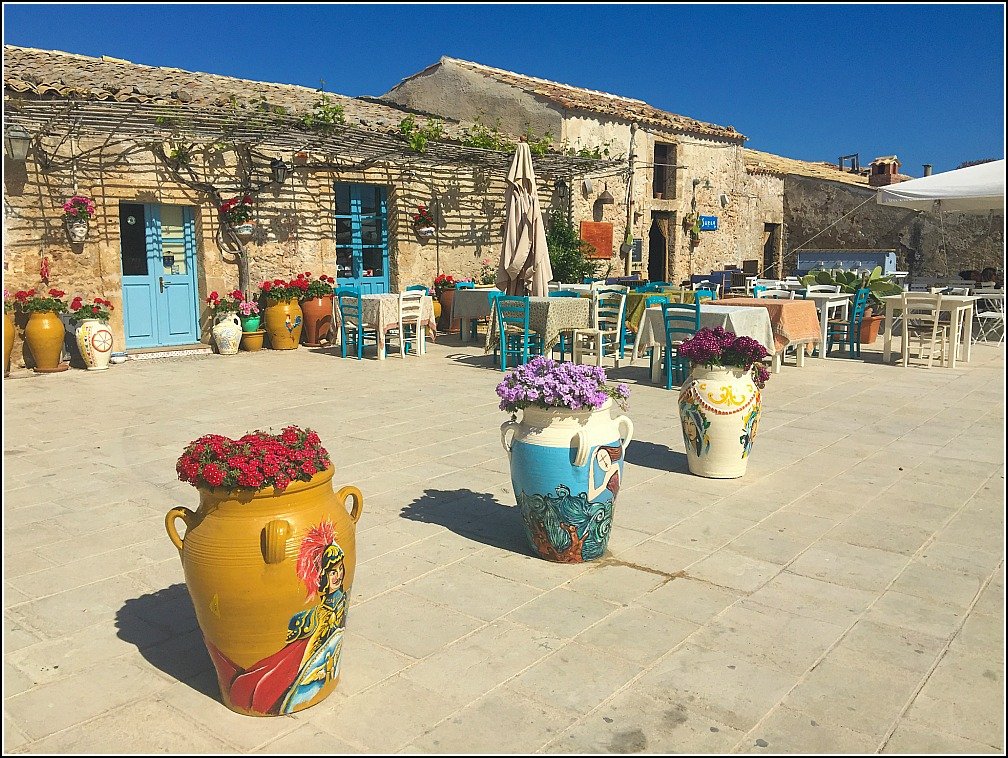 This southern corner of Sicily is a wonderful area to potter around in. Scenes through the car window were never predictable and swung in a wide arc from green vistas viewed from those crazy high bridges that Italians love, through many a shabby abandoned building, to grand baroque churches and swathes of plastic greenhouses growing superb tomatoes at Pachino on the way to Marzamemi. I hadn’t seen greenhouses like those since our trip through southern Turkey. 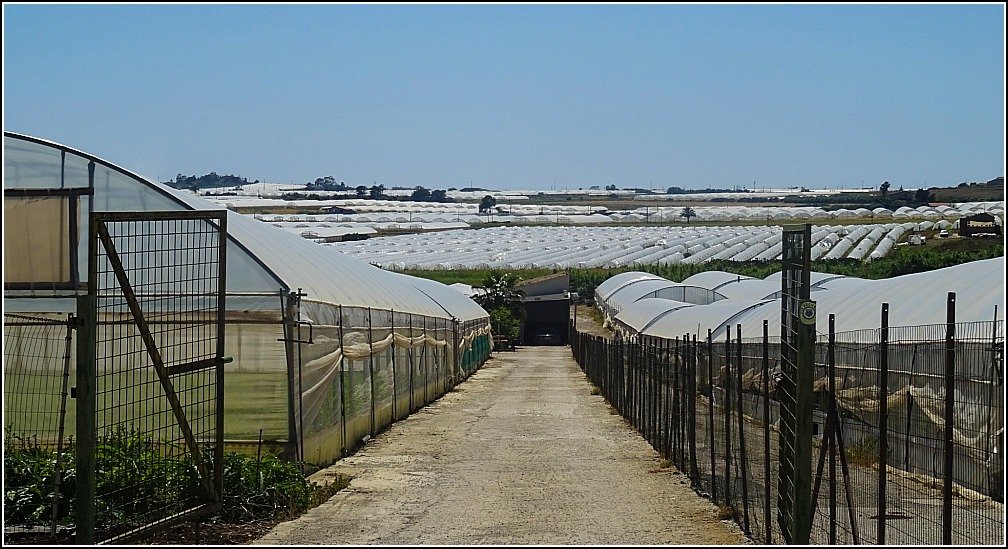 We stopped the car often to stand at the bar of an out of the way service station, the best place to grab a 1 Euro cup of coffee and I always seemed to be in a little Macellaria on the way home, choosing something for that night’s dinner. You never know what is waiting to be revealed in this special corner of Sicily.

We visited Sicily as part of Ten Weeks in Europe 2015.

We rented a car in Siracusa and drove to Modica, eventually dropping it off at Palermo airport.

For the sake of manoeuvrability rent a small vehicle in Sicily and refuse an upgrade to something larger.

Airbnb is an affordable accommodation option for the Southern corner of Sicily.