As day broke on our 14 hour Suha Bus journey from Goreme in Cappadocia, we were greeted by the rain, grey clouds and grey water of the Black Sea. On land this area of  Turkey is lush and green, and why wouldn’t it be, with a whopping 2500 mm of rain falling each year.  It was in Trabzon that I hastily purchased an inexpensive clear umbrella from a street vendor.  Pulled down over my head it kept me dry plus as an added bonus, I could even see where I was going.  There was marital discord when Marty ditched it before our flight from Turkey to Cambodia.  It took all my self control not to moan about it’s demise during the end of rainy season downpours we encountered later in Cambodia.

On Day 1 of our Eastern Turkey Road Trip we followed the D925 through the Iyidere Valley, crossing the Kackar Mountains and following the Coruh river from Ispir to Yusufeli.  More than any other day this one took us to the highs and lows.  The countryside varied dramatically as did the condition of the road and our GPS abandoned us.  For this reason I have provided plenty of photographs, shown in order so that you can see the vagaries of the route first hand.

The hills that rose steeply from the Iyidere Valley floor were steeped in tea and flying foxes (ziplines for goods) while the small gap between road and river was often filled with wet and muddy cows.  To our eyes, used to the drying Autumn colours of  Western Turkey, the mosque minarets looked slightly out of place against this sudden Swiss-like green. 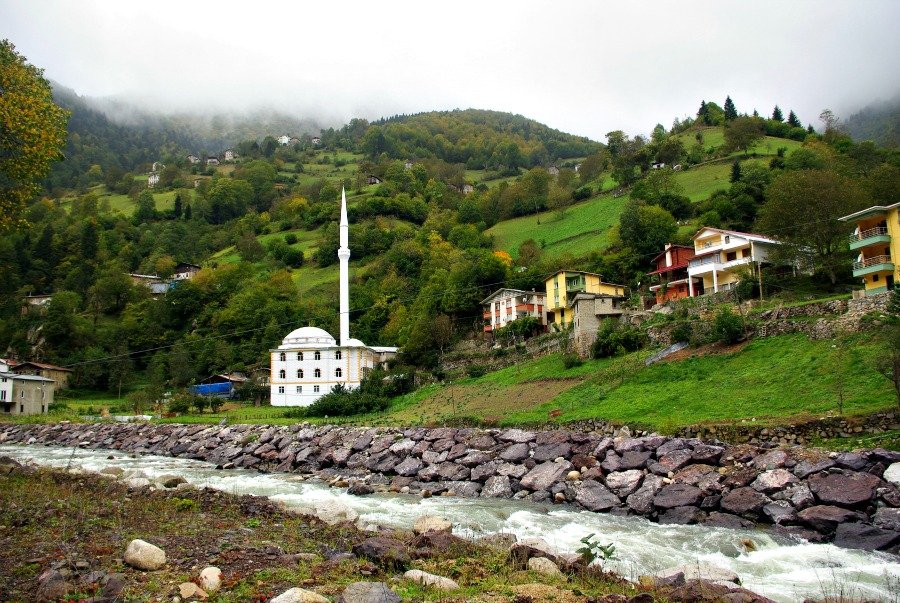 The photo with the cows describes the valley well.  Taken from the road it shows how the cows, river, playgrounds and houses shared the limited space.  Goats roamed the mountains and were our constant lovable road companions. 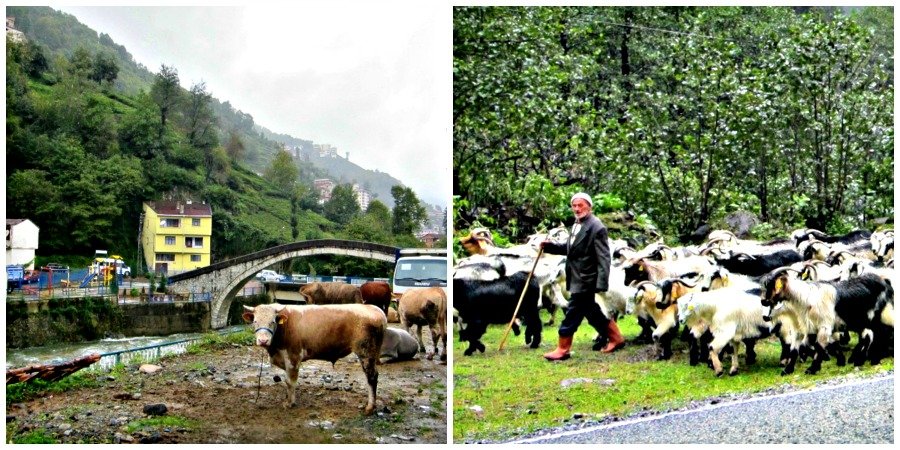 As we gained altitude the drizzling rain turned to mist. You would have to live like we do, in a tropical climate, to share our excitement of the first unexpected patches of road side snow.  Excitement grew to amazement when the pine trees became at first lightly dusted, then laden with an icing sugar white. 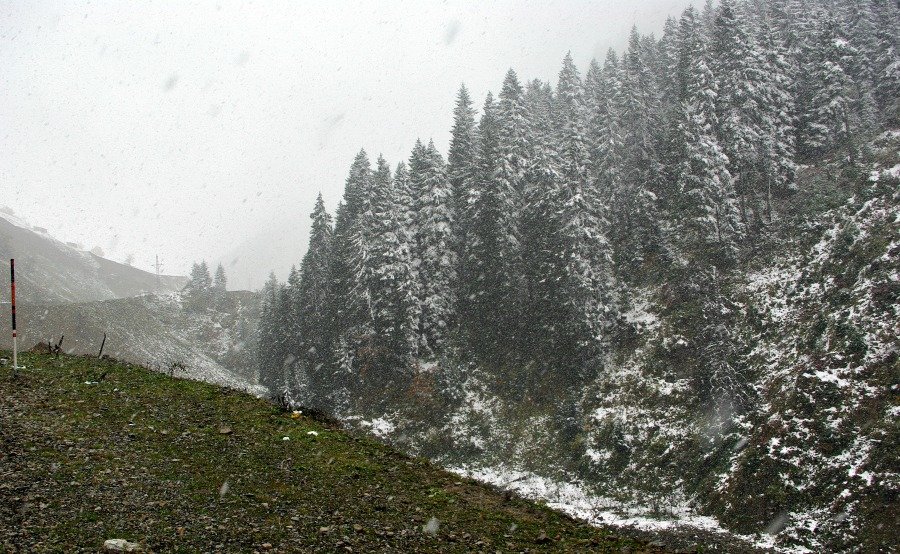 Then we reached serious looking snow.

Shock and Horror!  Iced up abandoned trucks lined the roadside with one frozen in a jack-knifed position.  Boulders of varying sizes littered the road and I held my breath as we inched our way between them.  My brain was racing while my camera lay still and forgotten.  Our car had not come equipped with chains as snow was not expected until at the very earliest mid October.  We took comfort from the fact that apart from the trucks and rocks the road was clear and we were cheered by the fact we were now following a Polis vehicle.  When I noticed them taking photographs I suddenly remembered my duties. 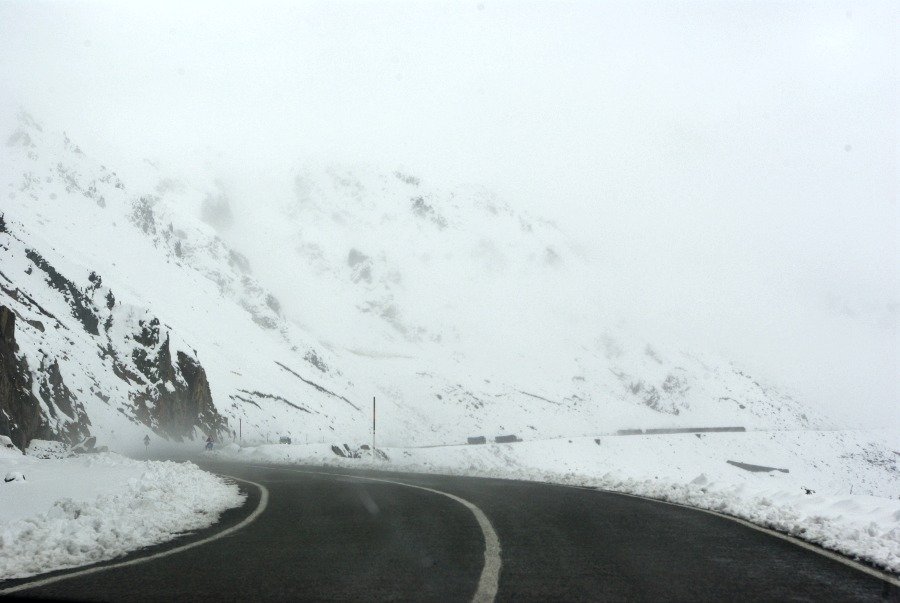 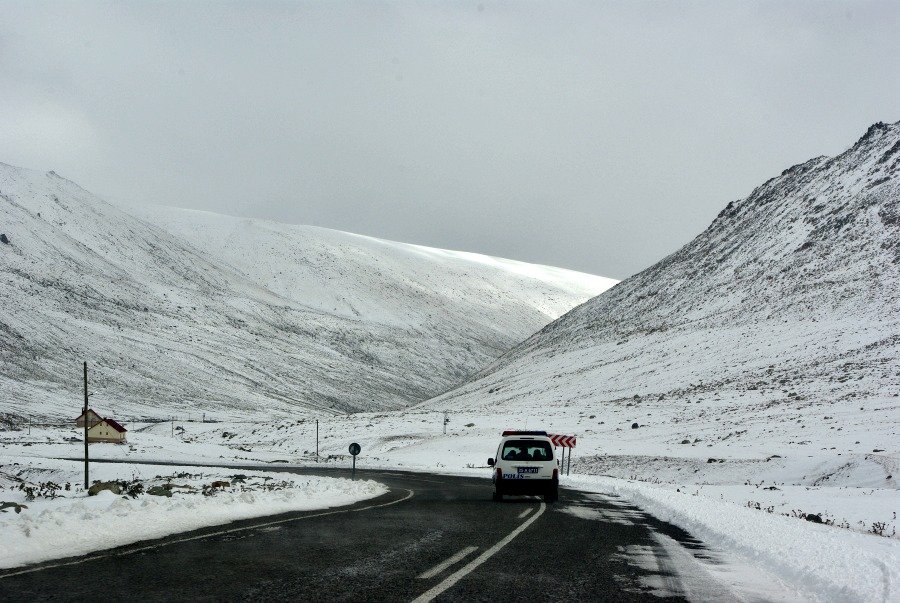 Then the hail started.  Although assured the rental vehicle had full insurance, I could not honestly say that I was 100% confident on that score, so I was a happy lady when after the 2600m pass, the snow and hail ceased.

The roadworks were a welcome return to reality. 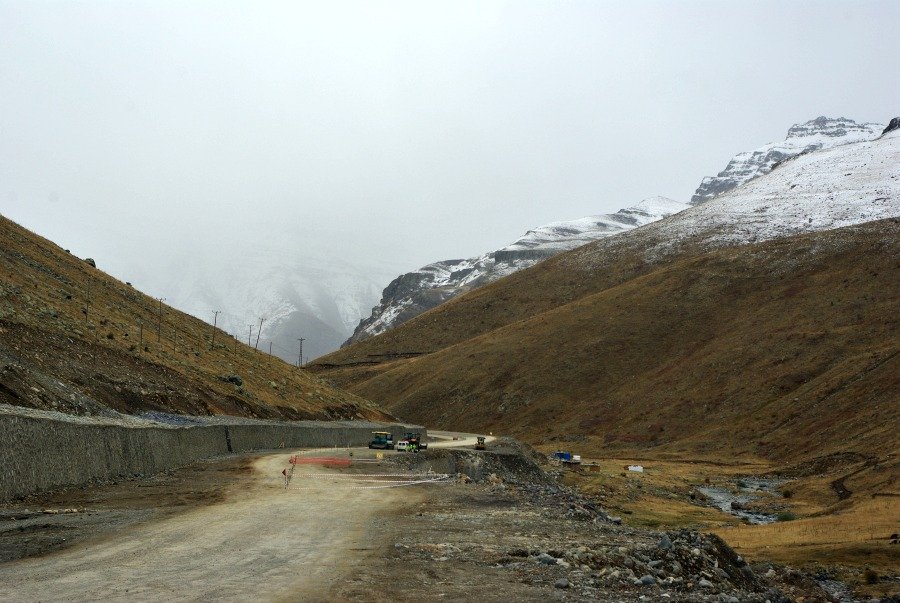 Sheep were coming down from the mountains. 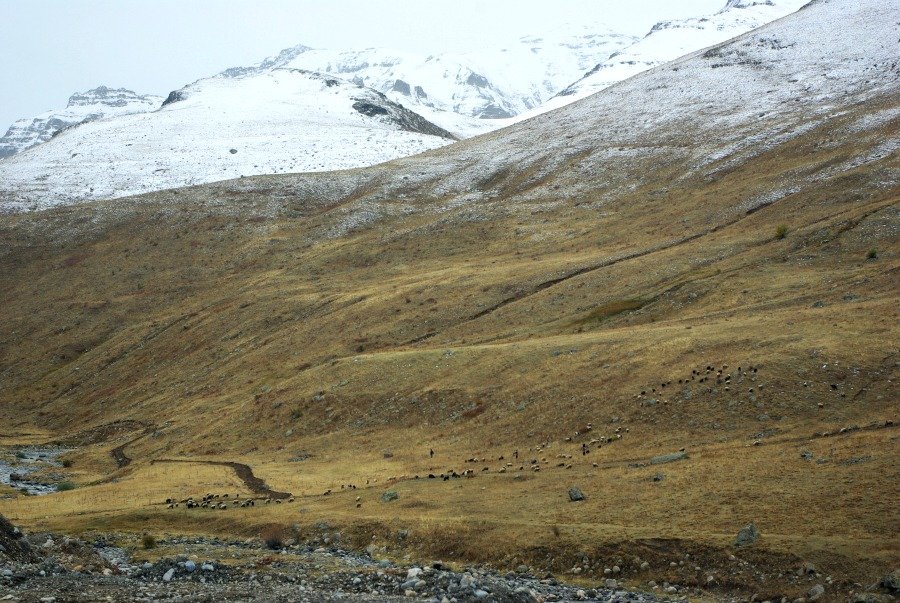 The lush green of the Black Sea coast was only a memory as the southern slopes of the Kackar Mountains transformed into the Teddy Bear brown hills that would accompany us for the rest of our drive through the Black Sea province and into Eastern Anatolia. 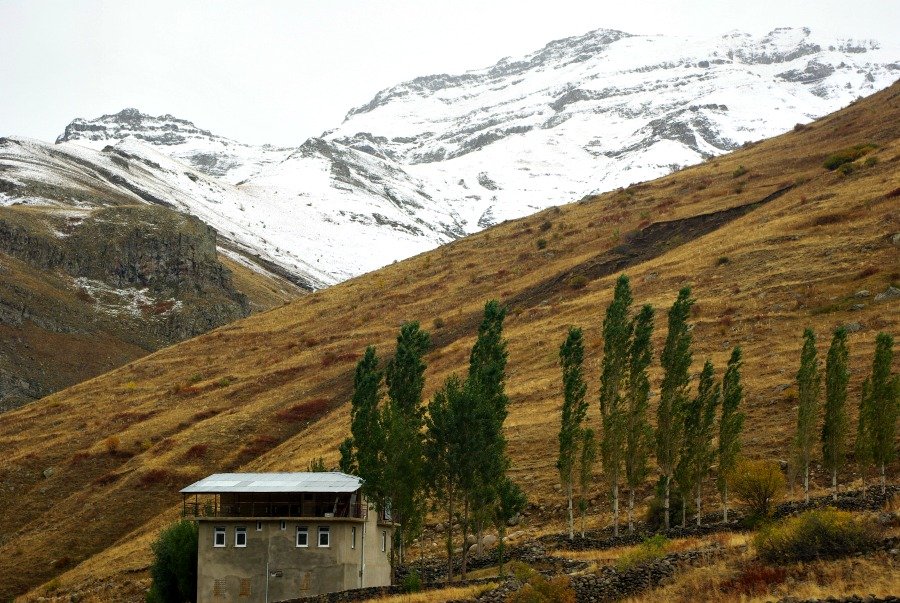 A little further on we passed a tunneling machine burrowing into the mountain – it seems that snow and hail might not be a problem for much longer!  My tunnel photo taken from the moving car was not very good, but I guess you have all seen a tunneling machine. 🙂 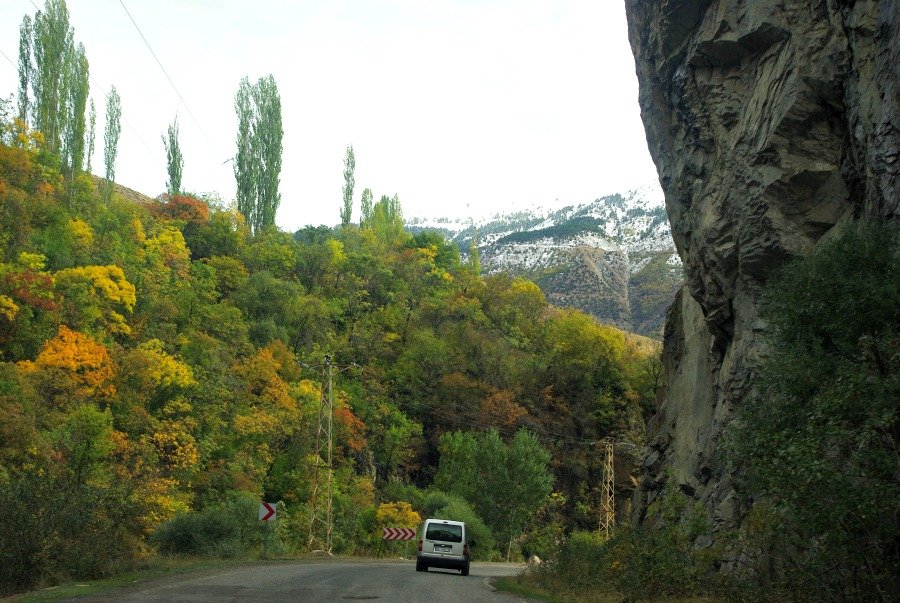 Turning onto the D50 we had a tasty chicken doner lunch at a tiny place in Ispir with the local lads.  The Lokantasi across the street was the hang out of the village girls.   They were the more linguistically adventurous – boldly practicing their English phrases on us before dissolving into fits of giggles.

The Coruh Valley was littered with castle ruins.  This castle/mosque sat on the hill directly overlooking Ispir.  The minaret doubled as a lookout tower and a little boy sat nonchalantly perched on the wall overlooking the drop.  All over Turkey and even in Istanbul the kids have ANCIENT WALLS to play on.

The road from Ispir led us from the heights of brand new Turkish dam roads, between rock crushing plants and along mountain roads that crumbled under the pressure of heavy vehicles.  It had generous views of stark mountains, picturesque villages and concentrated patches of cultivated riverbank.  It was on this stretch of road that our GPS repeatedly urged us to rejoin the route 🙁 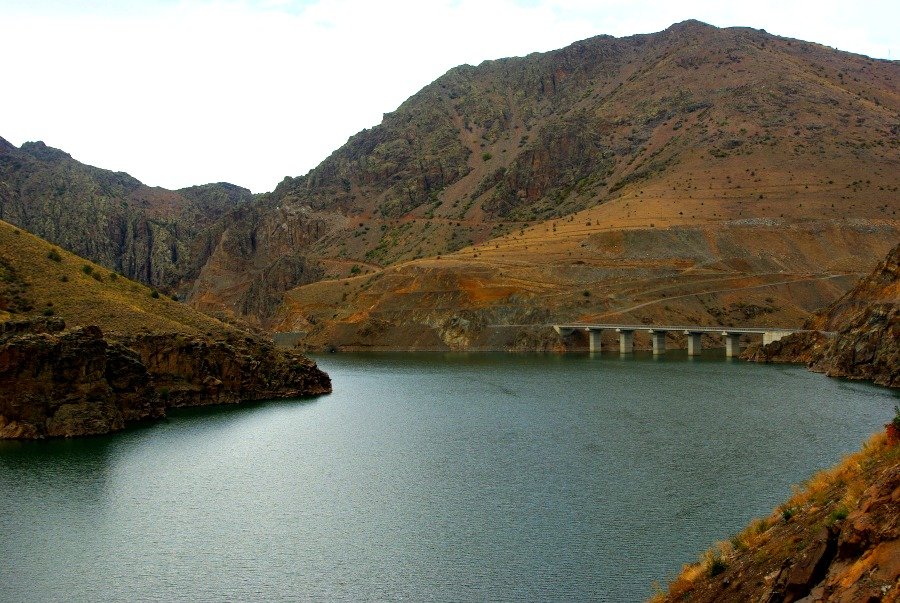 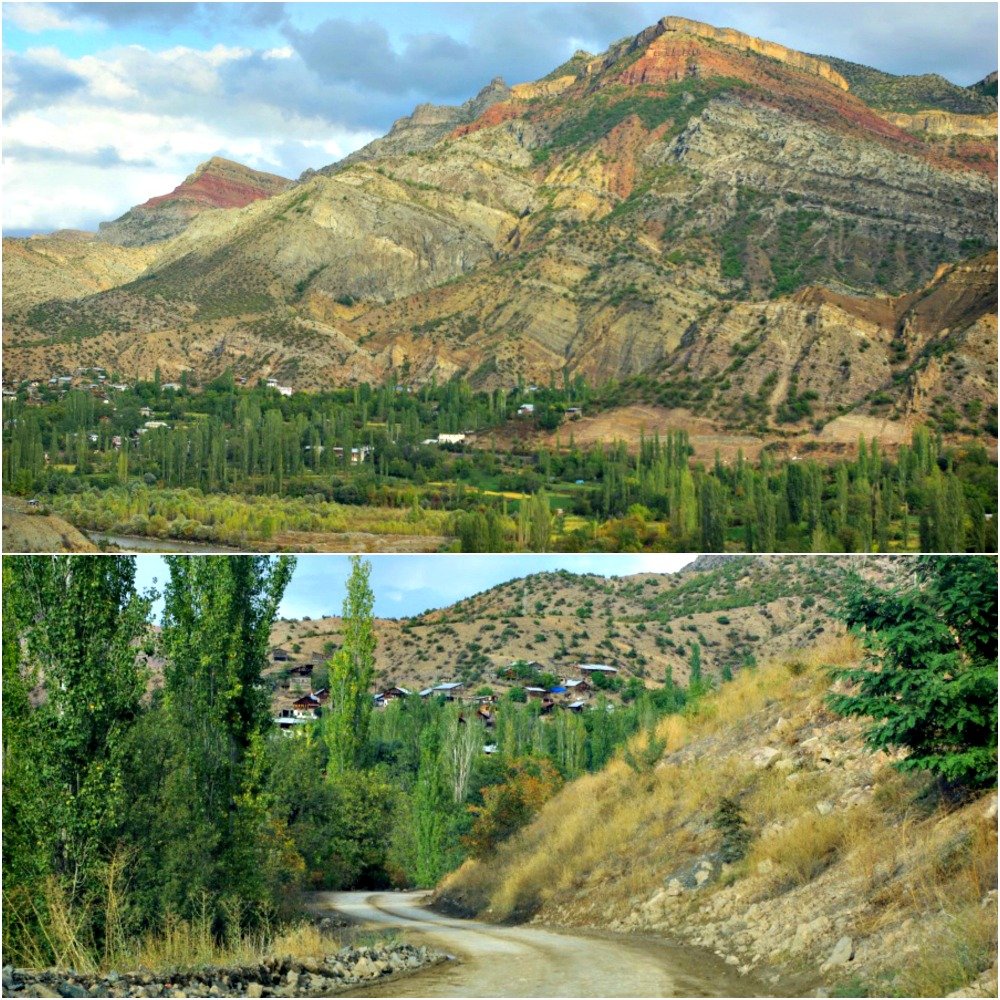 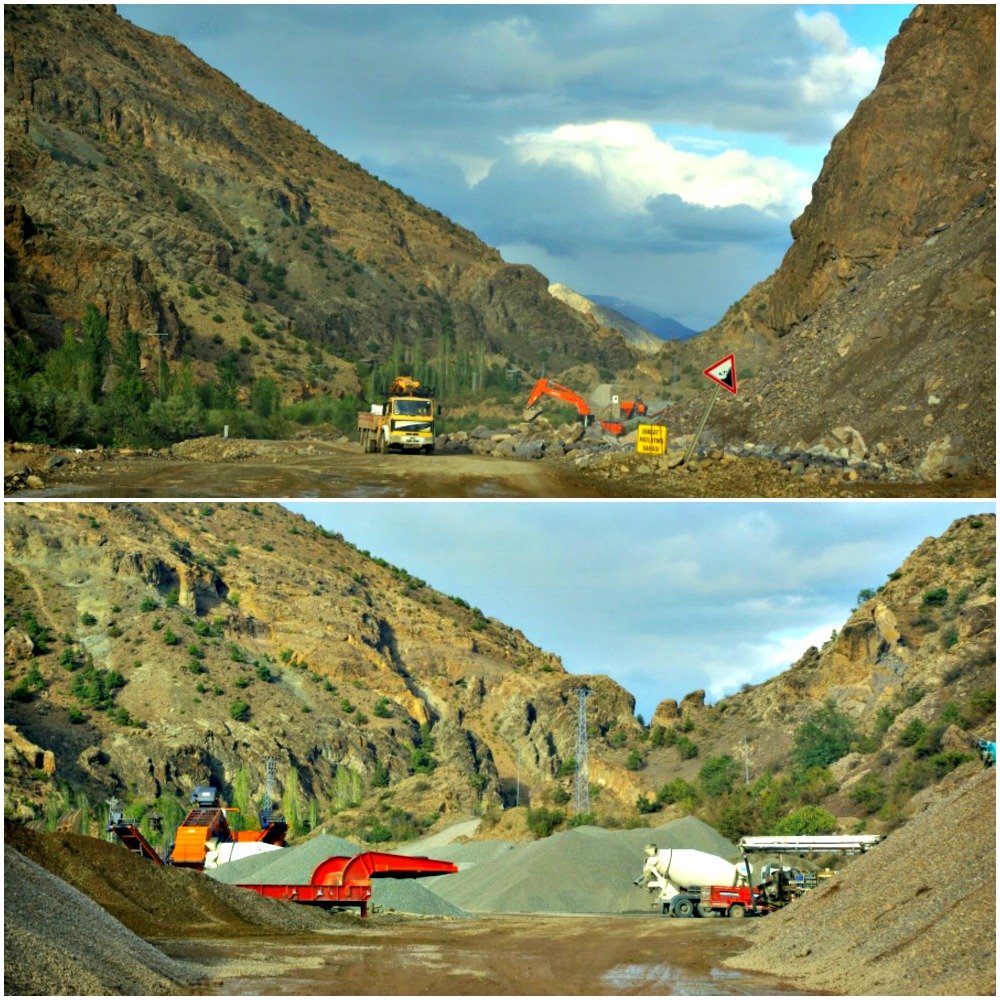 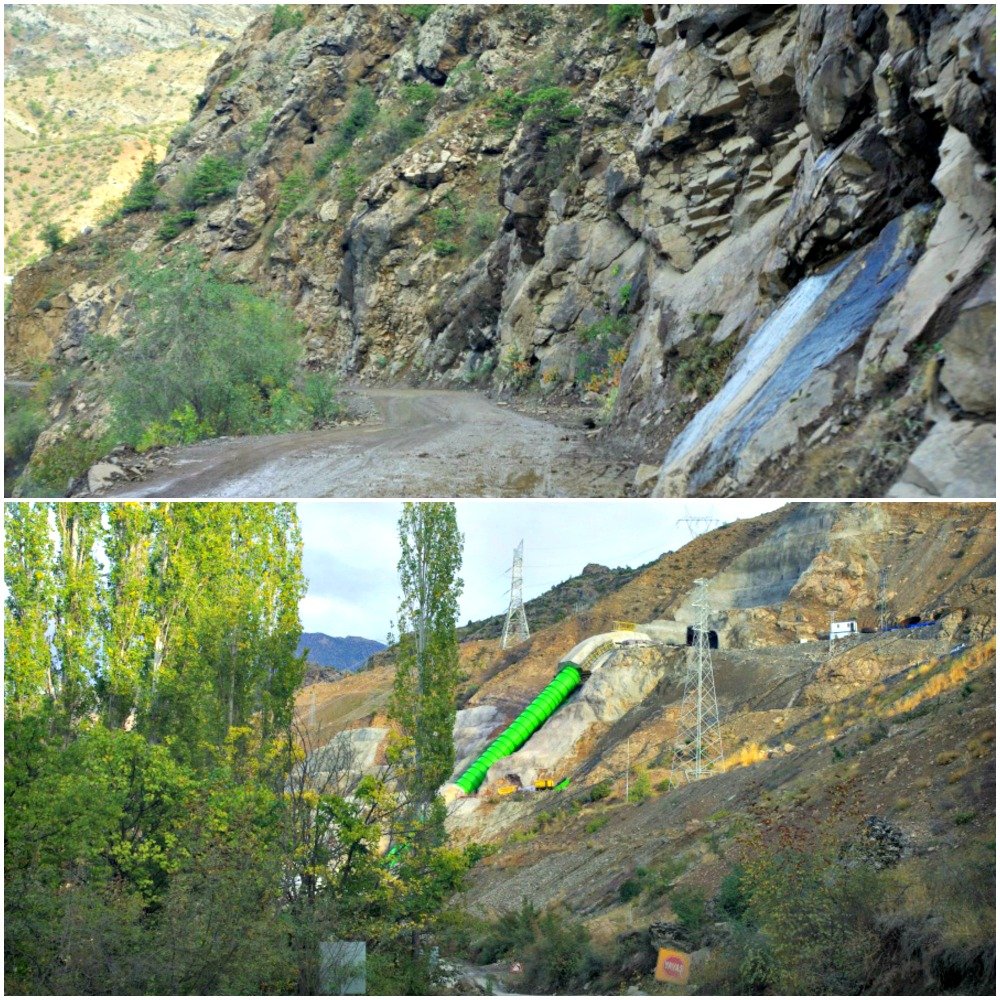 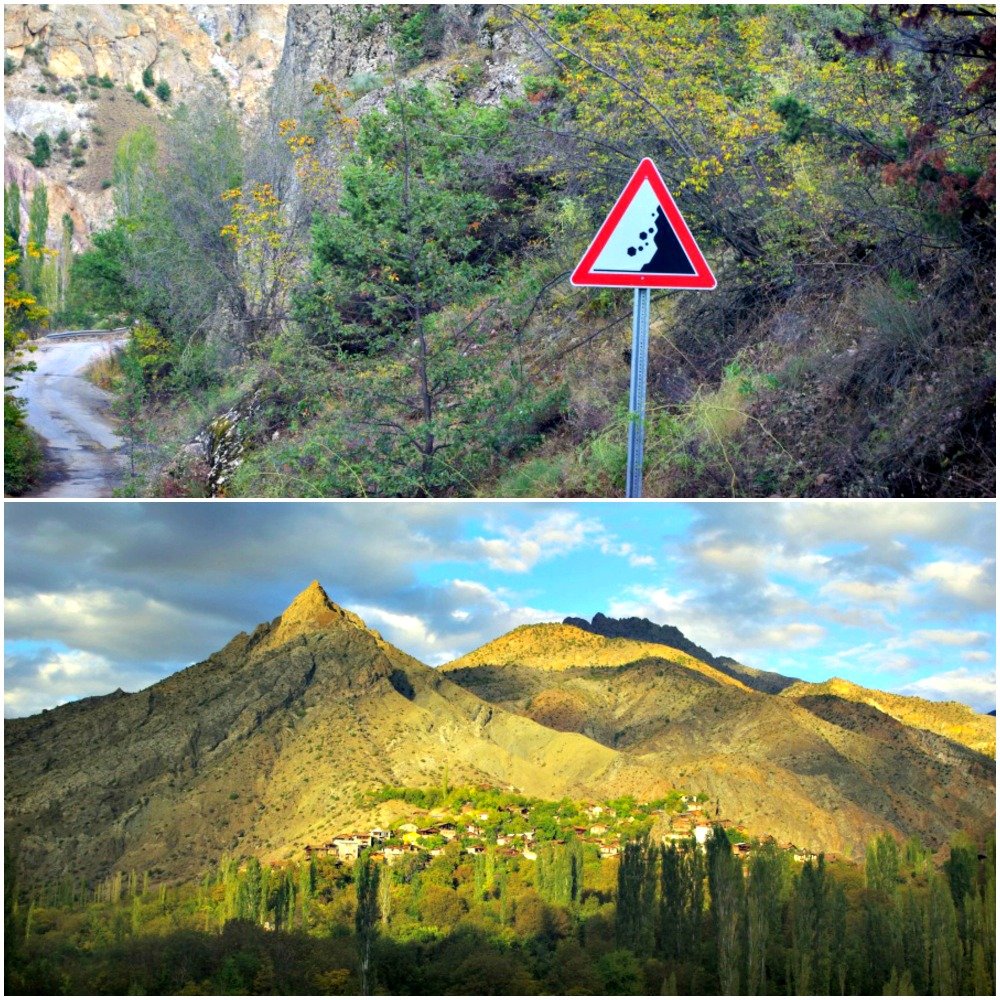 Our arrival in Yusufeli was a mixture of relief and disappointment.  Relief that we had finally arrived and disappointment that it was not one of the pretty villages we had seen that afternoon.  Instead Yusufeli was a vibrant town known mostly as a jumping off point for Kackar Mountain Hikes, Coruh River white water rafting, and exploration of the Georgian Valleys.  Sadly it is meant to be submerged beneath one of five DAM building projects on the Coruh River and it’s tributaries.

Birol from Greenpiece Camping & Pansiyon was busy constructing new rooms while we were there, his explanation being, that until they were given an actual date of submersion they would continue with life as they knew it.  He was not the only one with that opinion.  His restaurant and river-front rooms had been knocked down to make way for the town’s recently constructed riverside walkway.  Yusufeli people have pluck.

When to Visit The Black Sea Coast and Eastern Turkey

We had planned to start our road trip mid-September but plans changed while we tried to arrange the on-forwarding of our LOST MAC-AIR.  Eventually that fell through and our Eastern Turkey road trip began in early October.

The Black Sea coast is best visited between April and September – there will still be rain but not so much of it. Head to eastern Turkey from late June to September, but not before May or after mid-October unless you’re prepared for snow, road closures and bone-chilling temperatures.

Click here for MORE INFORMATION.
In 2002 there were catastrophic floods in the Black Sea town of Rize and because of the steep mountains, land slides are a very real threat in most of the valleys.  The 2002 event was not an isolated incident and there is regular serious flooding in the Black Sea area.
We were lucky on our road trip but our experience emphasizes the importance of planning a road trip to suit local weather conditions.
This post in linked to Nancie’s Budget Travelers Sandbox for TRAVEL PHOTO THURSDAY.