Nara is a pretty town not far from both Kyoto and Osaka. It is knows as the first permanent capital of Japan and today is a beautiful town full of historic lanterns, fabulous temples and a great place to take a self guided Nara Walk.

Yamato, as modern day Nara Prefecture was then known, was birthplace of the emperors and it’s name graced the bow of Japan’s World War II Flagship.

Prior to Nara, the Capital city changed with each Emperor’s death – due to Shinto beliefs.

After only 75 years as Capital, a priest of Nara’ powerful buddhist heartland seduced the Empress. This caused a near coup and the hurried withdrawal of the Capital to Kyoto, which although only 40km away was away from the clergy’s influence.
[pinit] 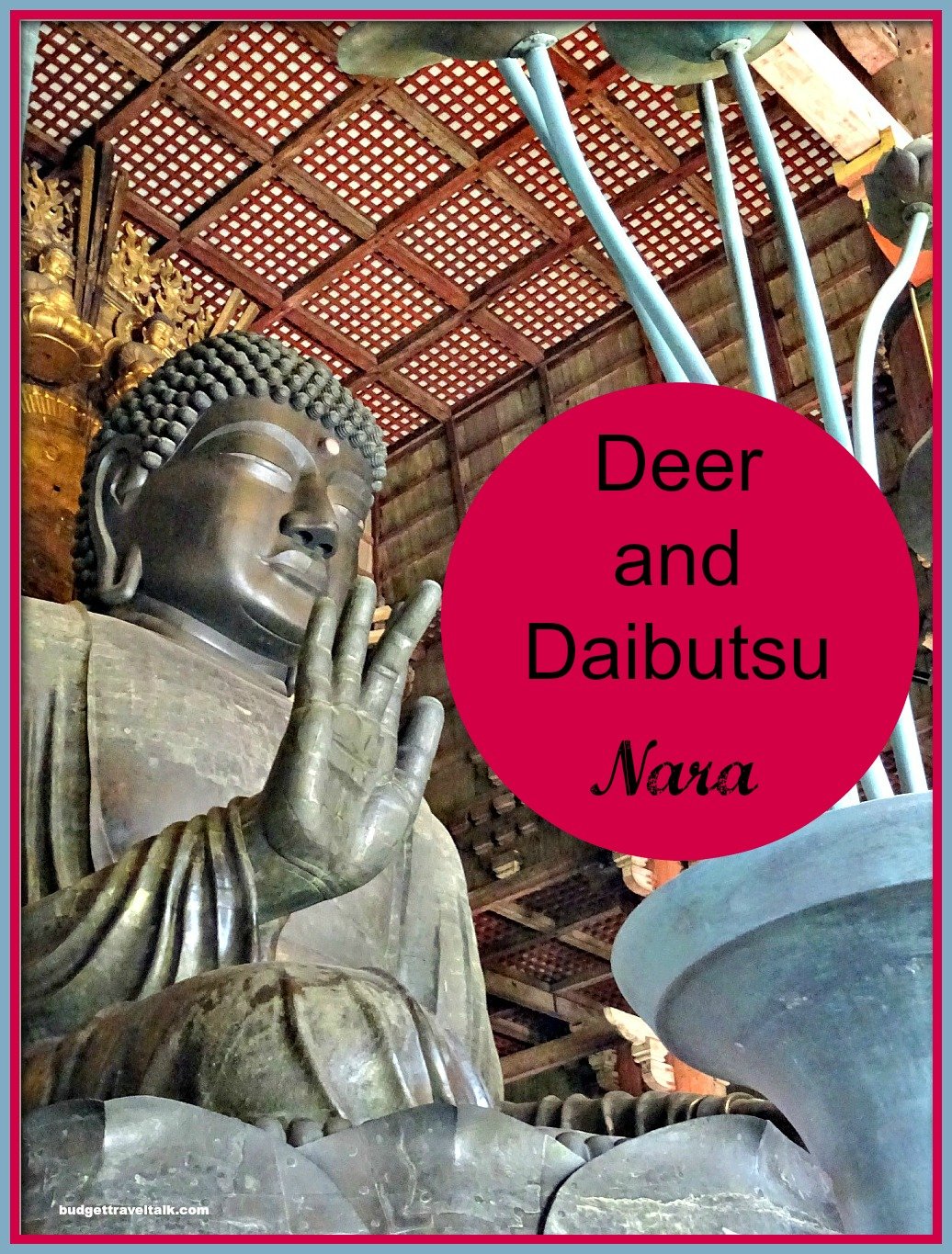 Although Buddhism became more politically powerful, Shintoism was and is the original Japanese belief. The religions co-exist happily, so much so that is common to find Shinto Shrines at Buddhist Temples. Nara-koen is a delightful mix of both.

There are eight historic monuments in Unesco World Heritage Nara making it second only to Kyoto, the cultural capital of Japan.  The monuments are not all monuments – there are 5 buildings, 1 forest, 1 palace and 1 Shinto Shrine.

Things to do in Nara

They are described as they appear when walking from the train station. 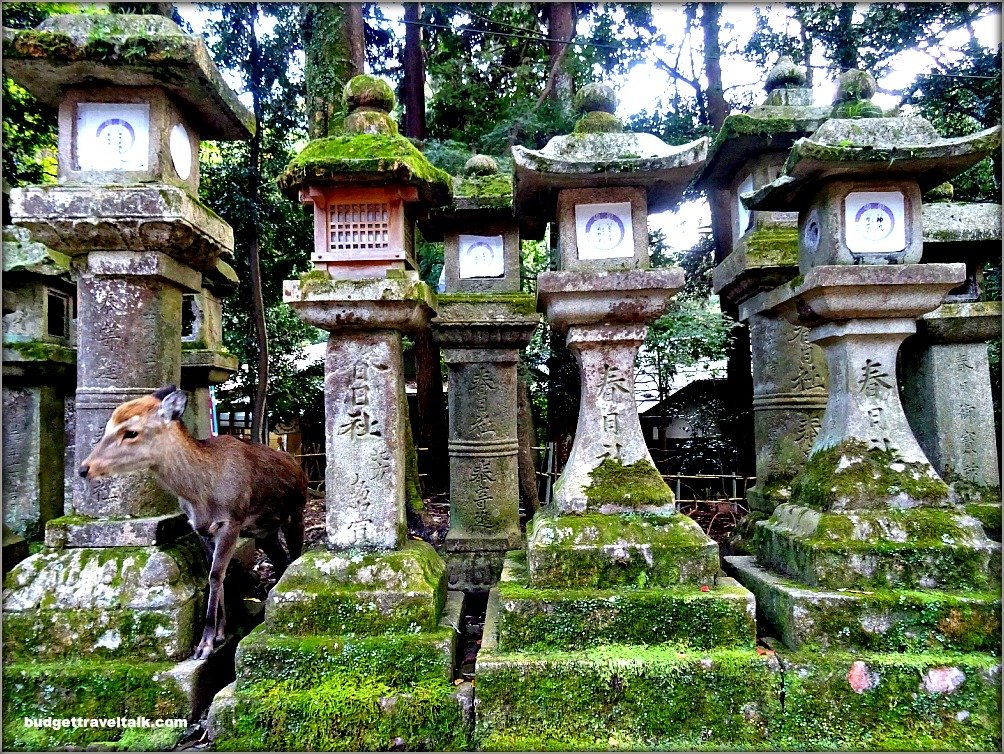 The 660 hectare park (includes temples) on the eastern side of the city is home to 1200 semi tame roaming deer who do a good job of manicuring the park’s grass. They linger outside temples, shrines and restaurants and walk freely elsewhere.

If it’s not gated – it’s deer country – and even if it’s fenced that isn’t enough to deter the deer.  On arrival two frantic deer were jumping barriers and running helter-skelter down the road bringing traffic to a standstill.

Nara deer park is a green open space with no barriers and is open 24 hours a day. 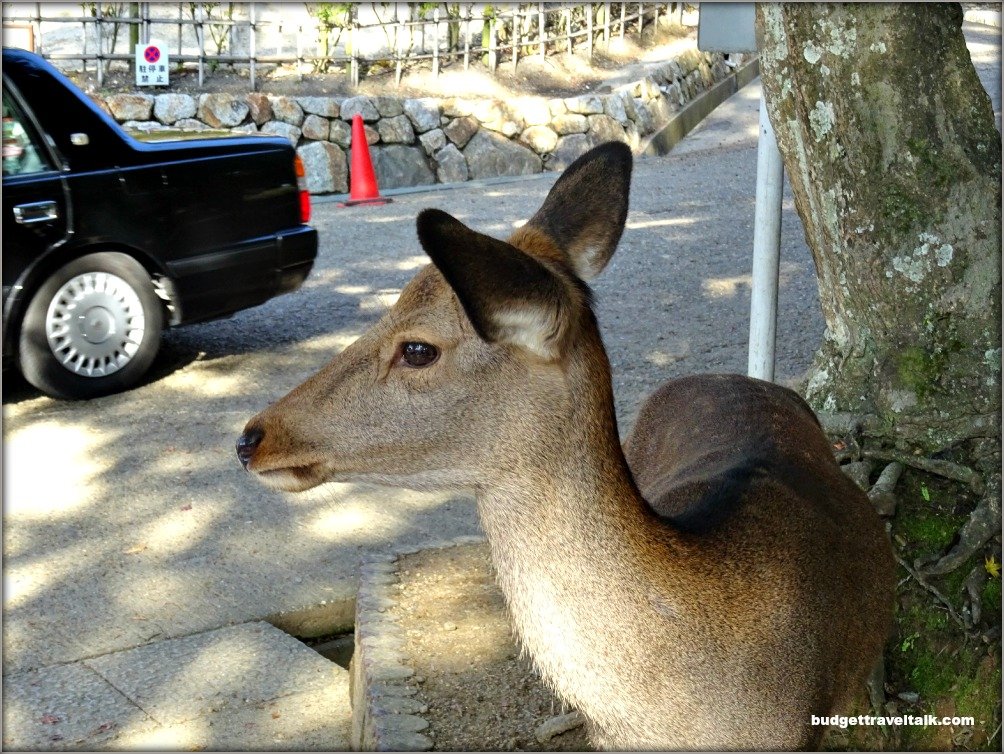 In Shinto days the deer were believed to be messengers of the gods. To supplement grazing, these National Treasures are fed deer biscuits (sold by vendors) and I imagine the town needs all the help it can get to keep the deer fed.

Some studies suggest that the Sika Deer are endangering the park by debarking trees to deer height. As they are accustomed to being hand fed it is best that small children don’t walk around eating. 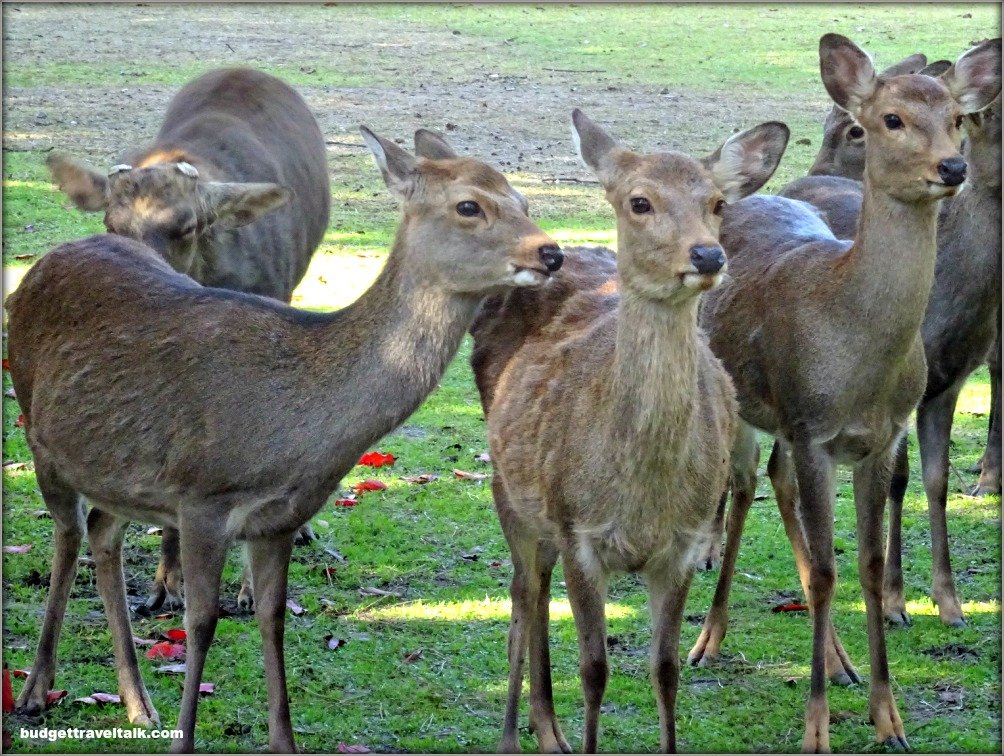 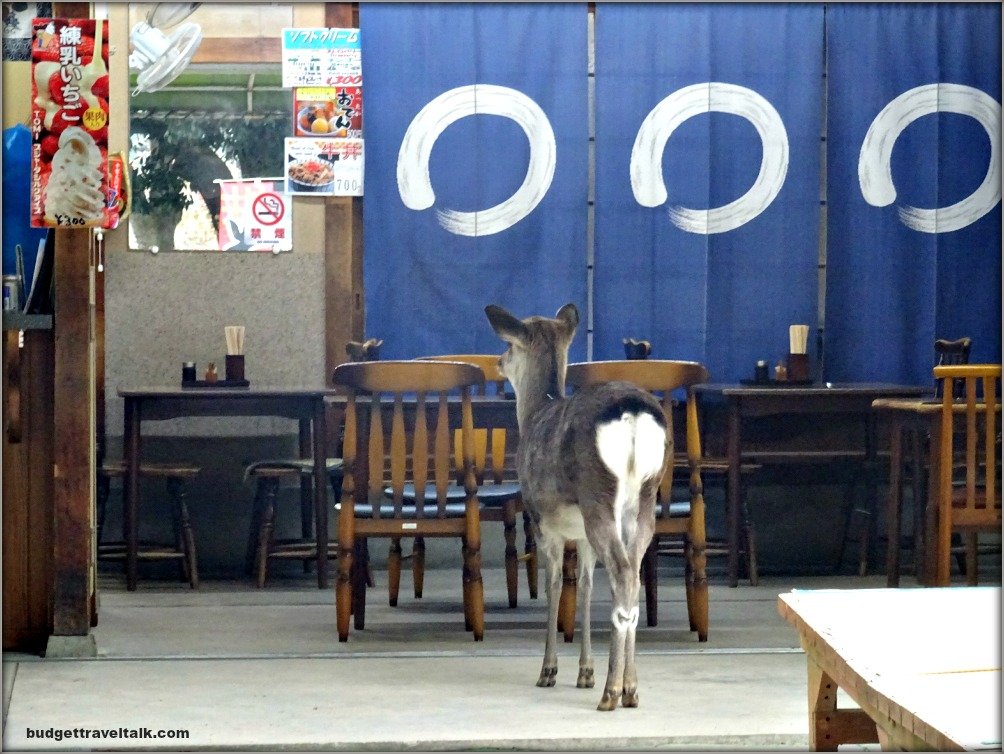 We hadn’t seen a Japanese/Chinese Bakery since the one we practically lived at in Montreal’s China Town. The soft roll on the left was stuffed with fried potato, cheese, egg and tomato sauce and the half eaten dough ball held a moorish curry filling. Together with the hot dog and raisin bun the meal cost under $10. 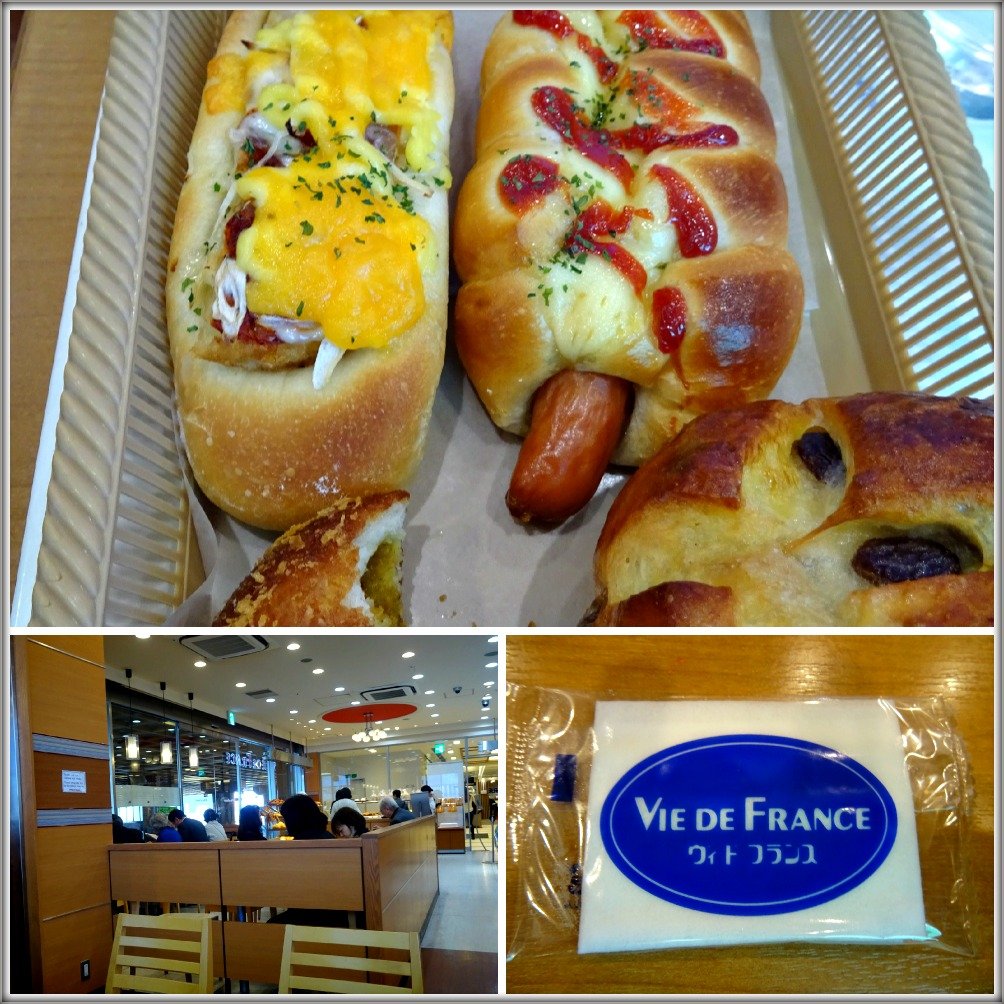 As well as finding an excellent budget lunch, arriving at JR Nara train station, as opposed to Kintetsu Nara allows for an enjoyable (recommended) walk down Sanjo-dori all the way to where it terminates in the 169 road and park.

Sanjo Dori has an interesting mix of shops and a pleasant vibe that provides a balance with the cultural pursuits of Nara-koen.

Watch out for Mochitsuki (traditional Mochi pounding) on the right side of Sanjo Dori.  The two man act takes place at the hollow log, with one man holding and moving the soaked glutinous rice mass in the hole and the second whacking it with a wooden mallet.  Timing is crucial.

Mochi are not generally made like this anymore so the demonstration and showmanship pulls a huge crowd.

Some of the sweets are filled with red or white bean paste and sometimes Mugwort (Yomogi) leaves are added to the mochi ball to give a green appearance.

Evidently the Yomogi Moshi here are just like what Mum used to make.

Having already consumed lunch and ice-cream we gave them a miss.  Experience has taught me however, that I am not a lover of Red bean paste! 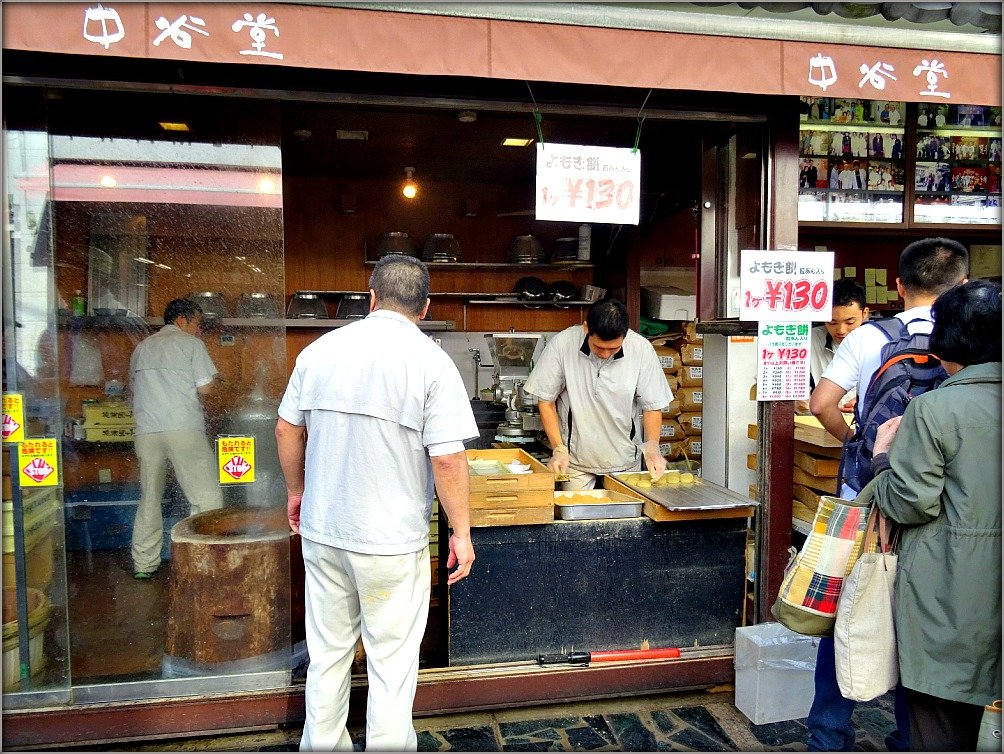 Without further ado I’m taking you directly to Todai-ji or Great Eastern Temple where the number one attraction in Nara the Daibutsu, the Great Buddha is housed.

Follow this Nara Walk to the Great Buddha Nara

From JR Nara station follow Sanjo Dori, all the way until it runs into the 169 and park then turn left.

Having turned left continue on this Nara walk down the 169, through the major Nobori-Oji intersection.  After rejoining the 169, take the first right toward the Neisuku Art Museum and follow the route shown to Nandai-mon.

Visit Nandai-mon then back track and continue on the path through the park to Todai-ji.  The entrance is to the left of the complex. 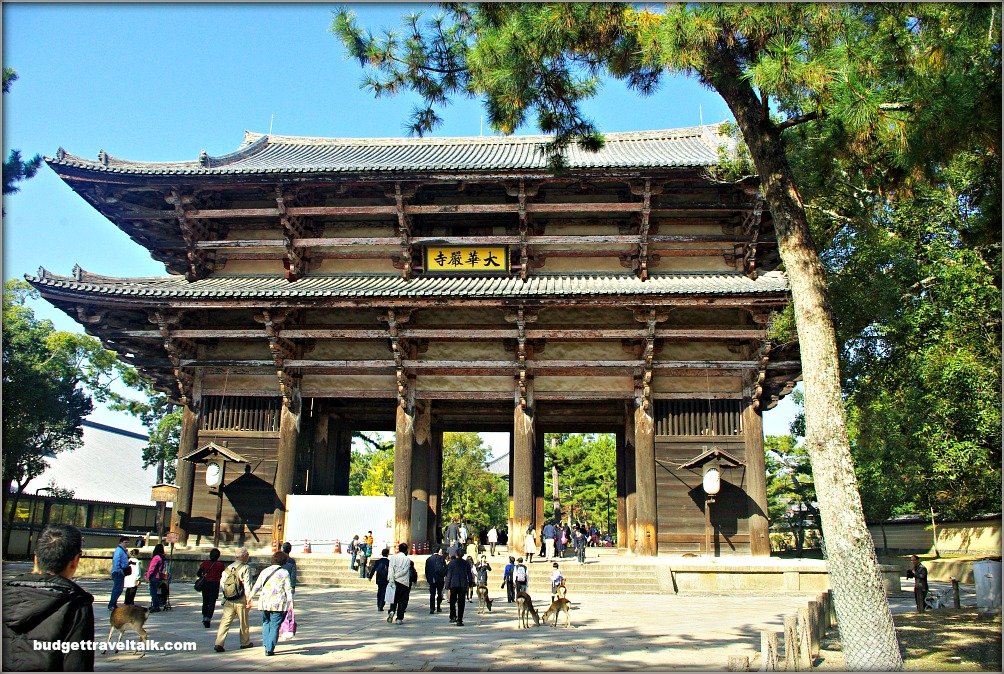 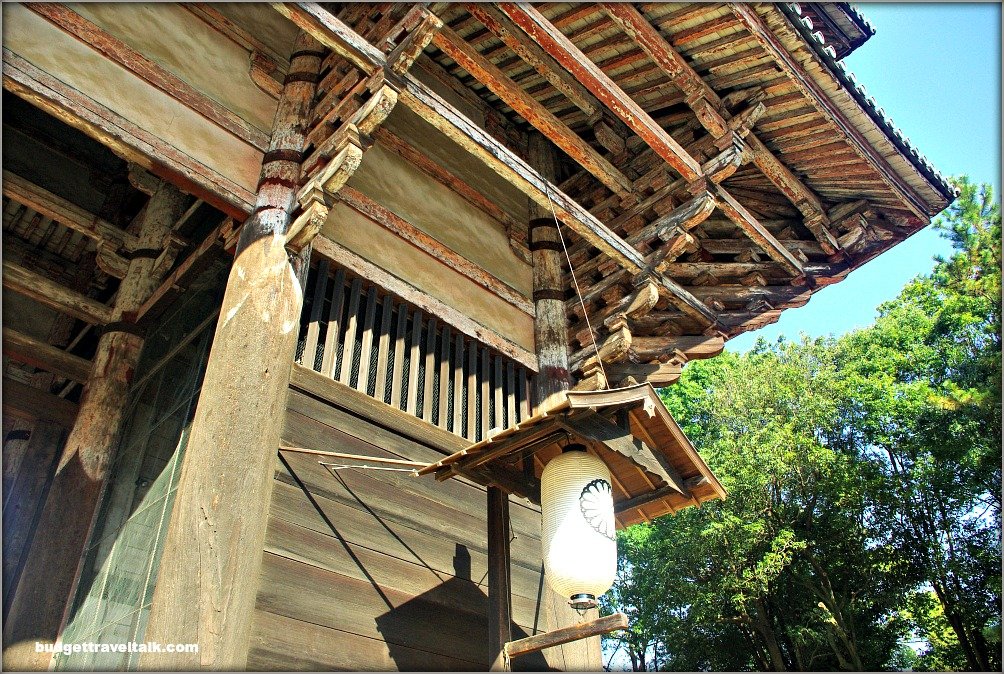 Angyo and Ungyo the fierce protectors of the gate are getting a facelift in this photo.  A Great Buddha needs Great Protectors and this photo hints toward their massive size. 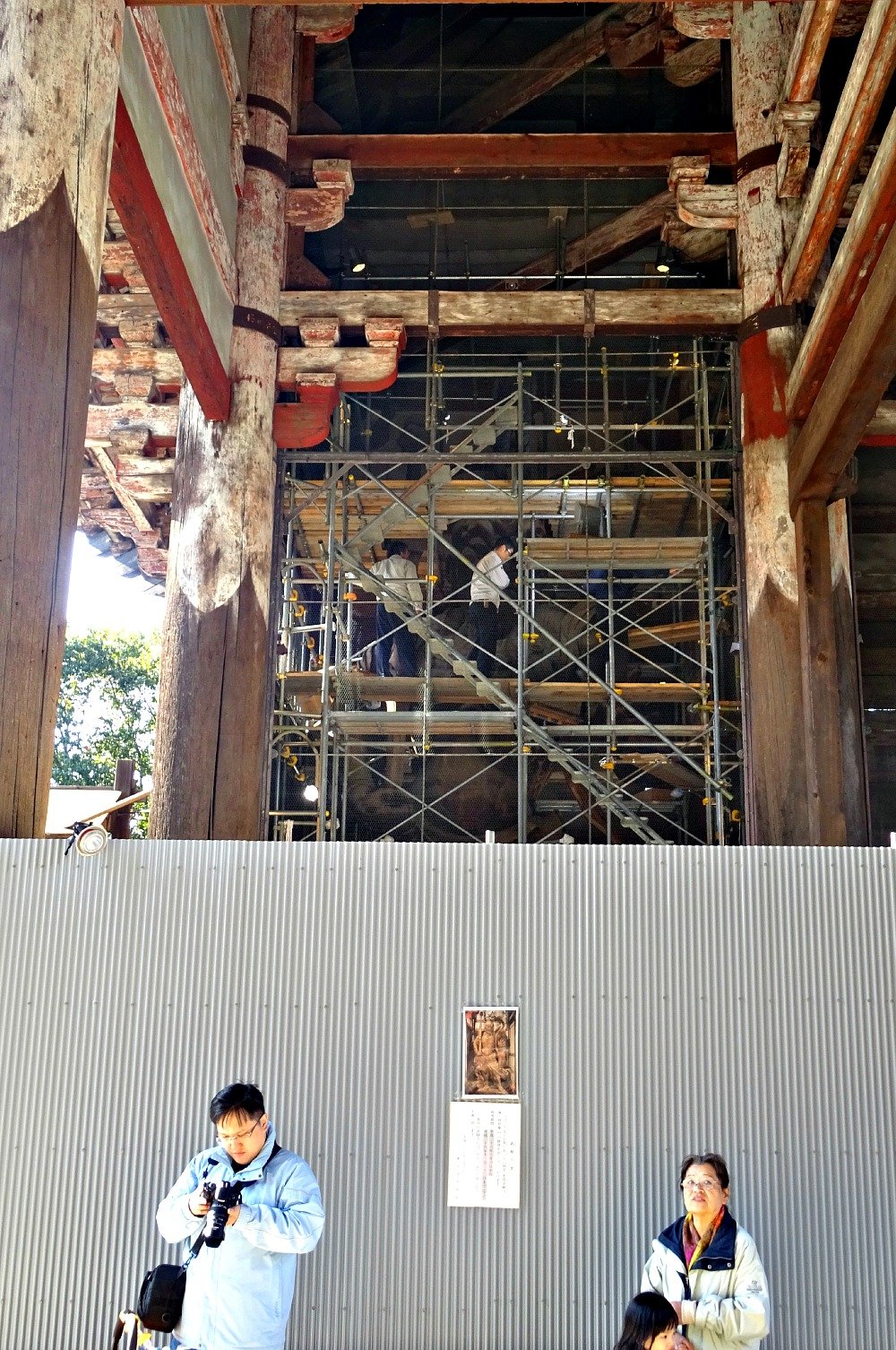 Todai-Ji is the name of the temple complex that includes the hall of the great buddha.  Started in 710 it wasn’t completed till 798 when the capital had already shifted to Kyoto.  It was a massive undertaking that nearly sent the country broke.  The temple is of the Kegon School of Buddhism which is based on the Flower Garland Sutra which believes in worlds within worlds. 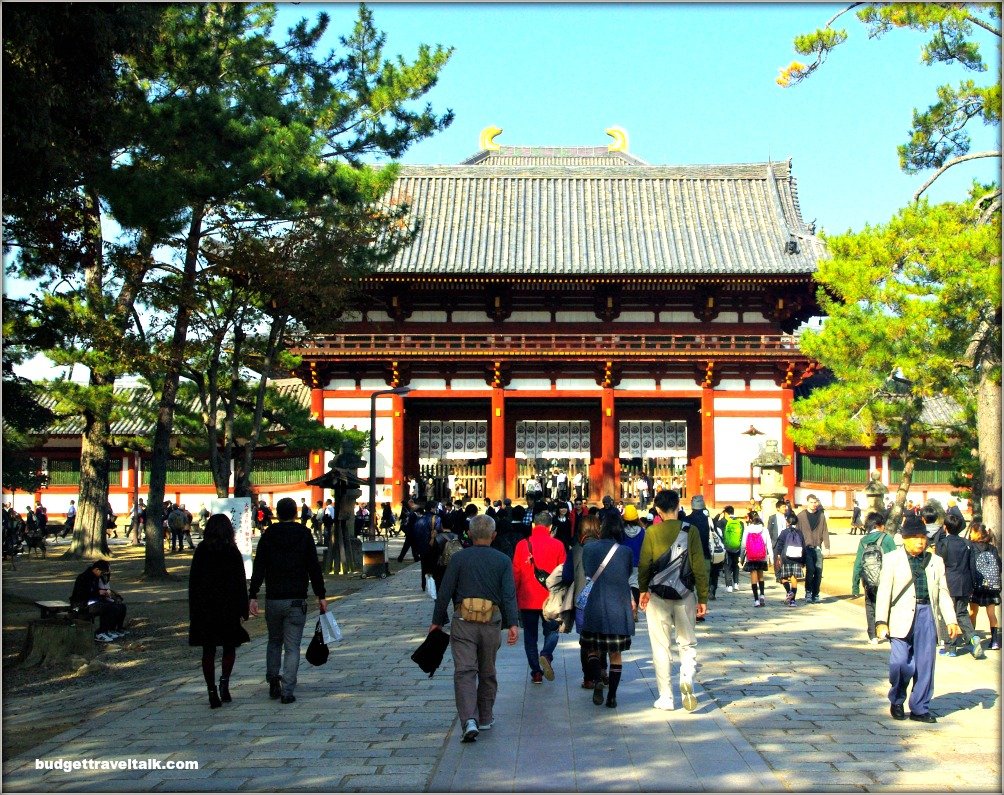 Daibutsu-Den – The Hall of the Giant Buddha (rebuilt 1709) is the largest timber building in the world and amazingly is only two thirds the size of the original.

The first sight of the hall is magnificent, humbling and exciting. 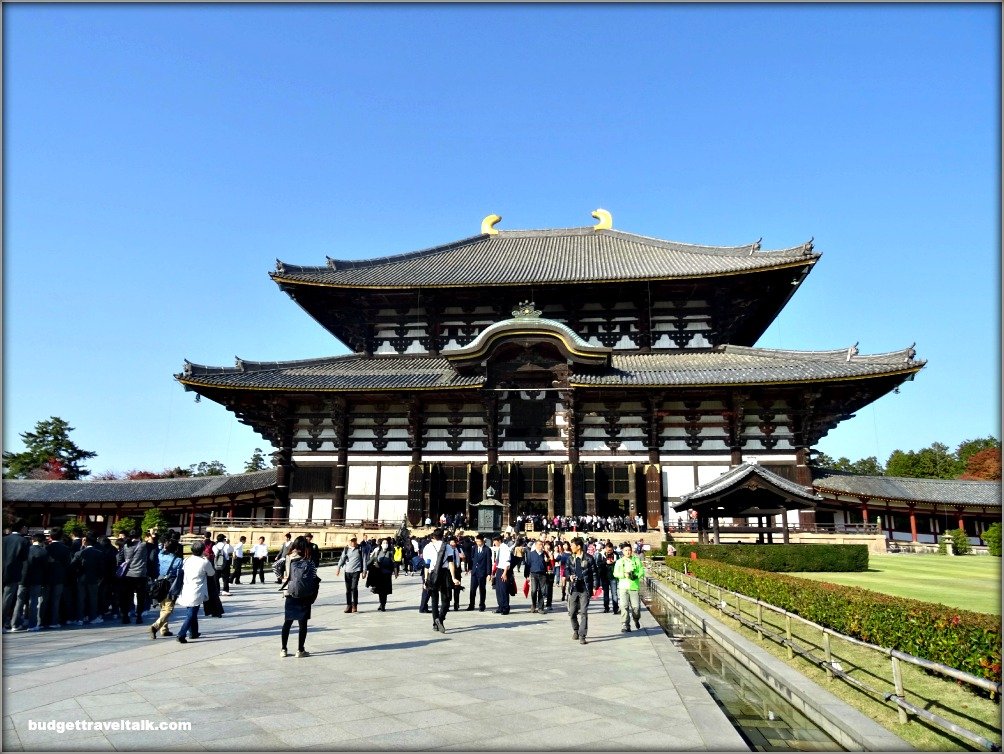 The Bronze Daibutsu contained within is 15 metres tall and made of 437 tonnes of bronze and 130kg of gold.  Originally cast in 746, it took eight casts and three years to complete and is one of the largest bronze figures in the world today.

The Daibutsu is the image of the Cosmic Buddha who gave rise to all the worlds and their buddhas.

Life has not been easy for the big buddha who literally lost it’s head twice during earthquakes and fires.  If you look closely you can see the difference in colour. 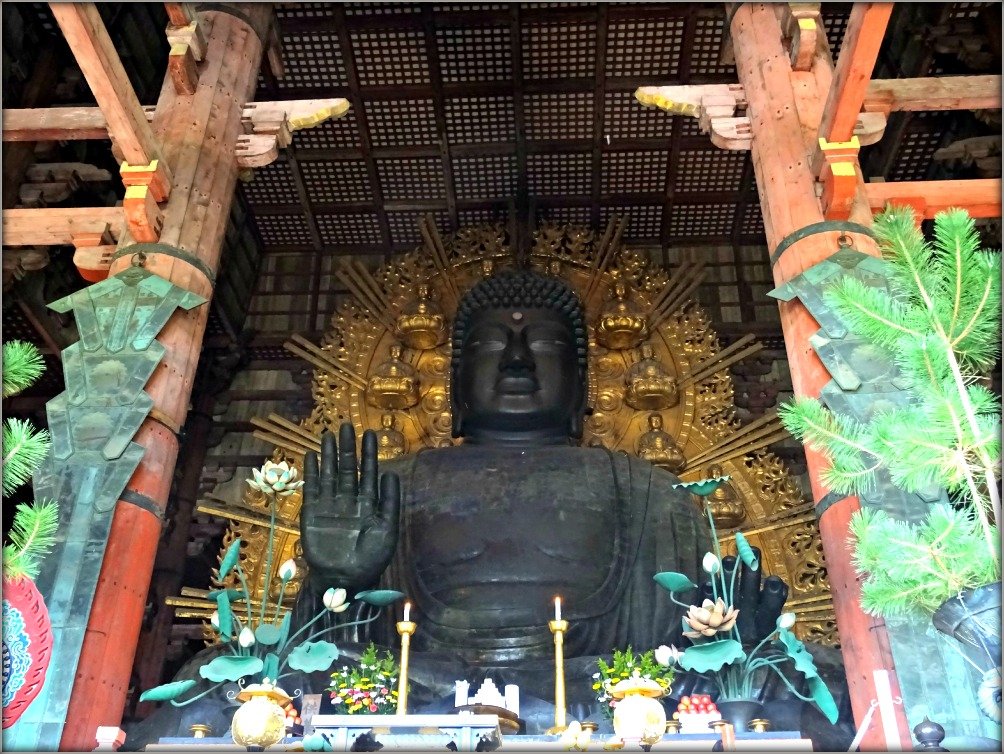 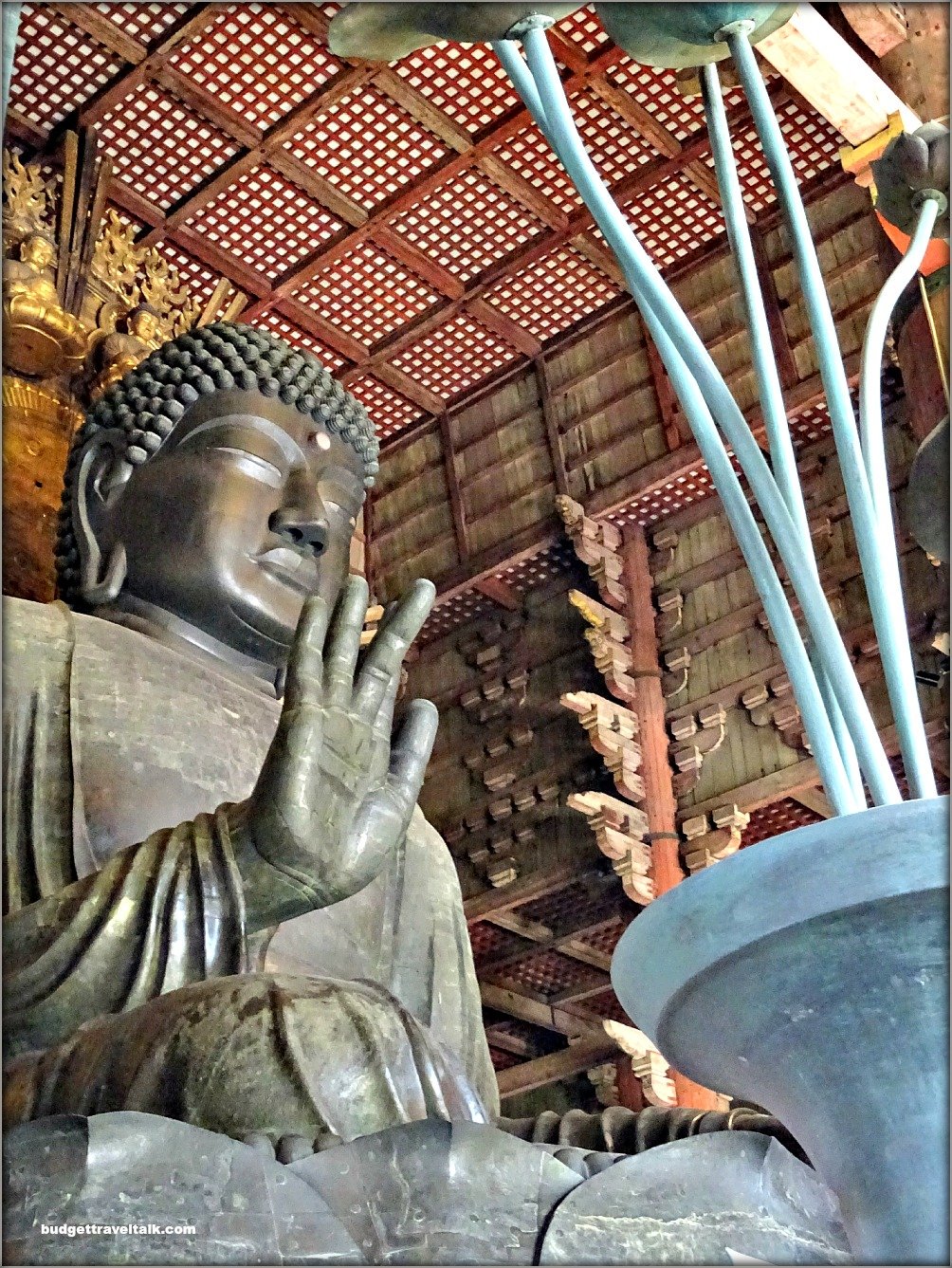 Seated on the left of the great buddha is Kokuzo Bosatsu, bodhisattva of memory and wisdom – a favourite of students.

A supporting cast of cosmic buddhist figures supports the Daibutsu. 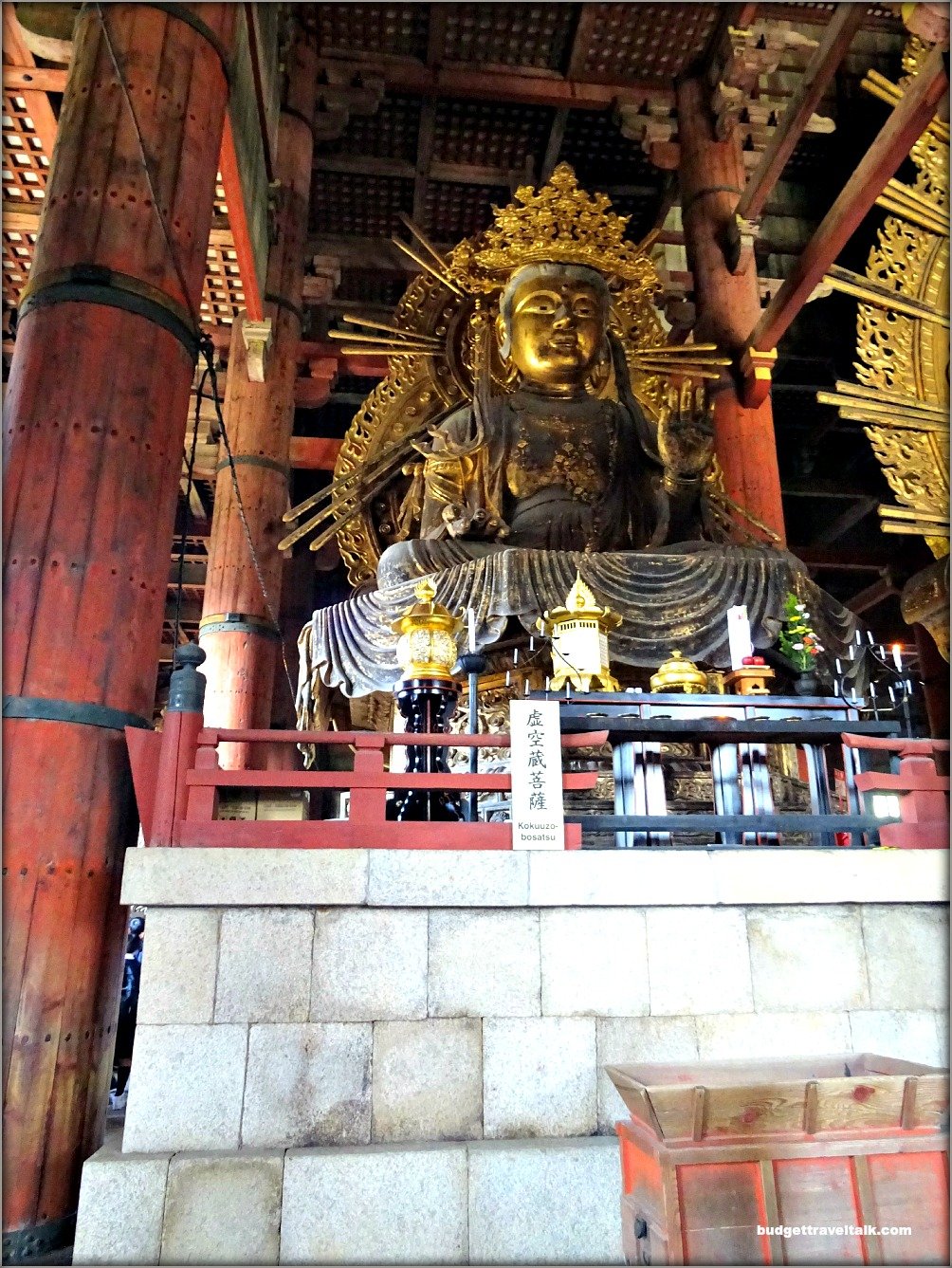 A favourite student activity encouraged by their teachers involved students launching themselves through the 50cm wide hole in a supporting column at the back of the great Buddha.

If the student fits through the hole (the size of the Buddha’s nostril) they are assured of enlightenment.

Hands are extended overhead as if diving and strategically placed helpers push and pull, providing great fun for everyone. 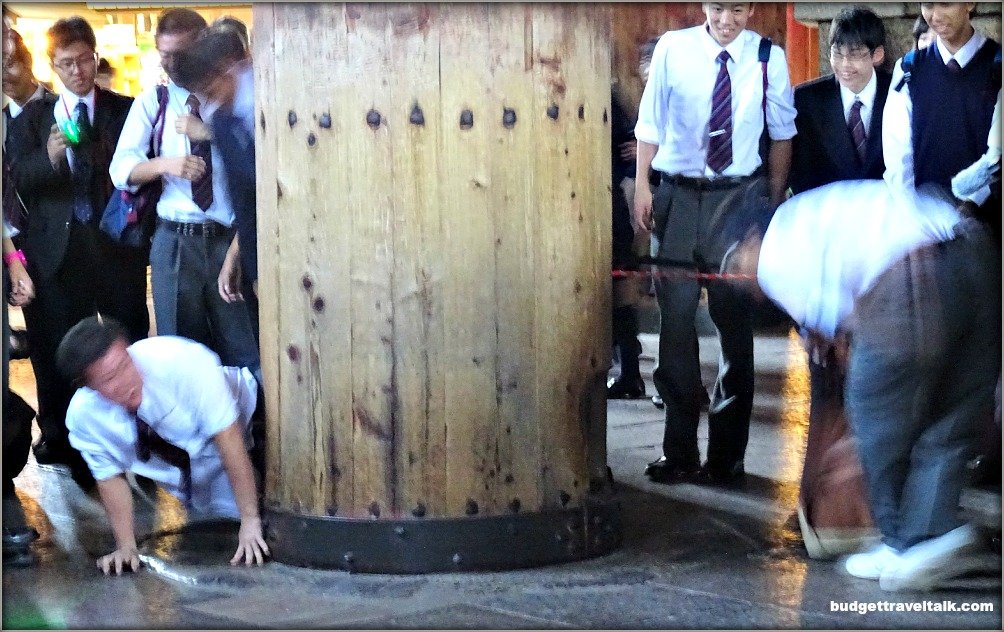 Although some visitors overnight in Nara, express trains from Kyoto take only 35 to 45 minutes, making day trips a breeze. To make things even better, Nara-koen where most of the sites are, is compact and walkable.

Absorbing influences from China, Japanese culture evolved in Nara.  In the 8th century the Chinese street grid pattern was adopted and some beautiful buildings from that era have survived for us to see today. As a result a Nara walk is a pleasure.

It’s easy and interesting with all of the main sites close together. You will most likely have an escort of deer which is as enchanting as it sounds.

A joint ticket for the Great Buddha Hall at Todaiji and the Todaiji Museum is 800 yen.