Discover how delightful walking in the vibrant port town of Split Croatia can be on this self-guided Split walking tour. Starting on the waterfront at the small boat port of Matejuška, it discovers a great value Split restaurant, historical streets, a massive square, the best gelato in Split before finishing at the ever popular people’s square of Narodni Trg.

It answers the question:

What is Splitska Torta?

…it involves layers of a mystery meringue and that is not a bad thing.

Seriously the Dalmatian Coast of Croatia is stunning and unique and with so many things to do in Split, I know you will love this Adriatic Port town.

Our free self-guided walking tour of Split is the perfect way to familiarise yourself with the charming Split waterfront and the streets and squares that line it. 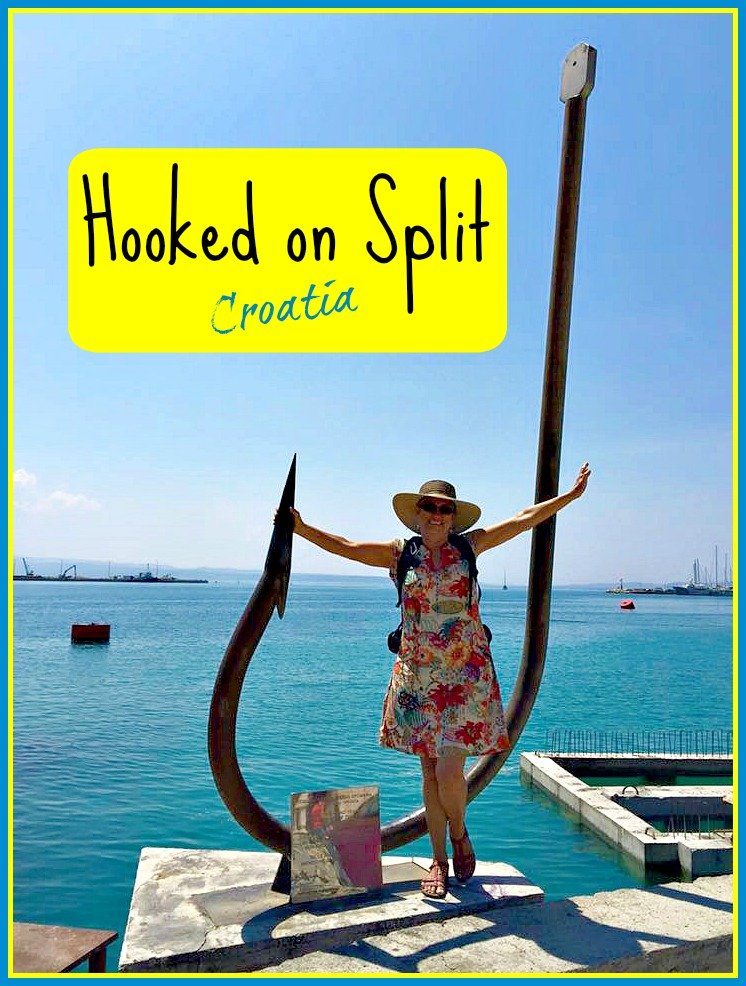 Matejuška is the name of the area at the western end of the Riva where the small boat harbour is. The Riva in Split is a wide palm tree lined promenade where tourists and locals go to check out the action, drink, eat and stroll.

The hook statue at the boat harbour is meant to farewell fishermen as they go to sea (or so the story goes) but it also works well as a photograph prop.

Matejuska is a busy place at night with everyone meeting up for drinks or a cheap home-style meal at Buffet Fife.

The Calamari and Chips at Buffet Fife could easily feed two people, especially with the addition of a salad. It tasted just as good as it looks.

The other dish shown below is a traditional Dalmatian meal called Pasticada, where beef is marinated in vinegar, cooked in red wine and served with gnocchi. 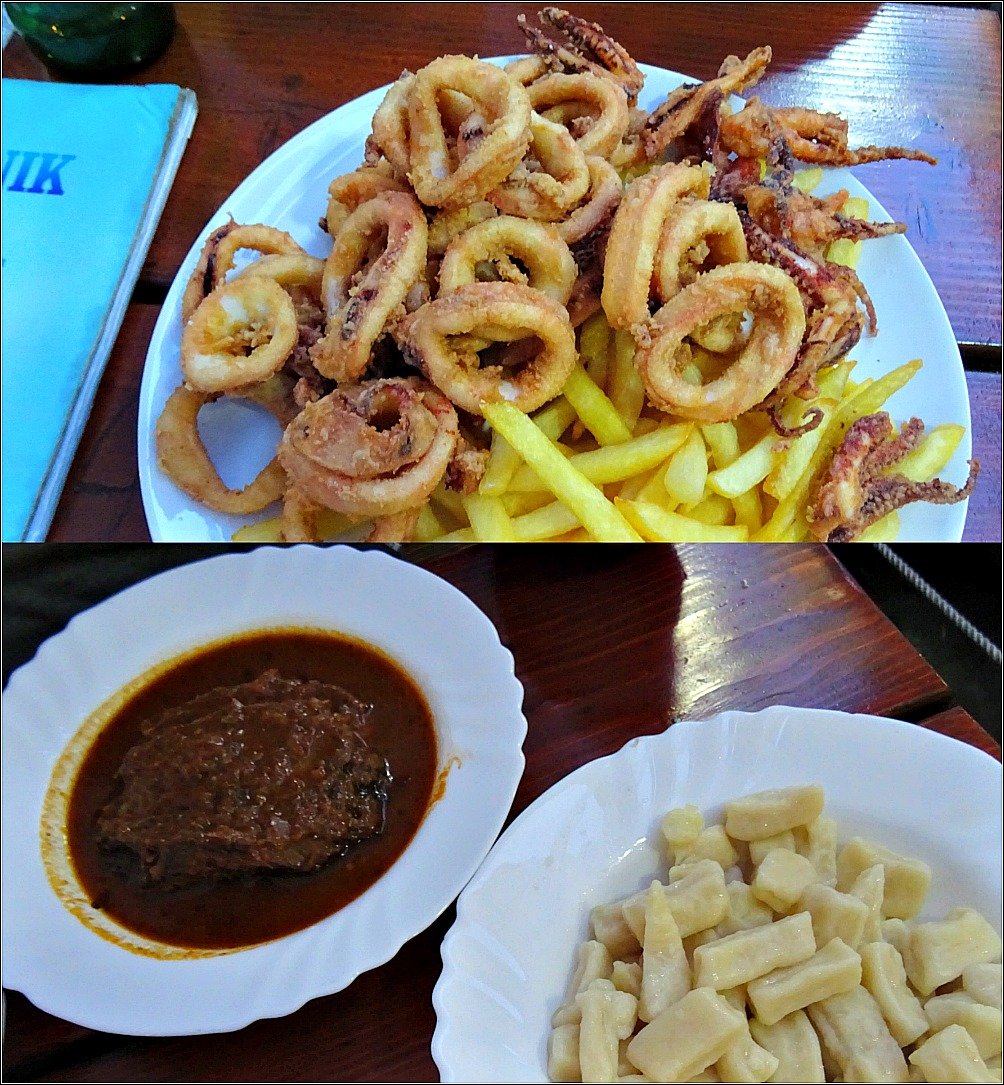 It is a friendly kind of place where you will most likely be asked to share a table, unless your party can fill all the places.  Look for a traditional stone house with tables spilling onto front and side terraces. 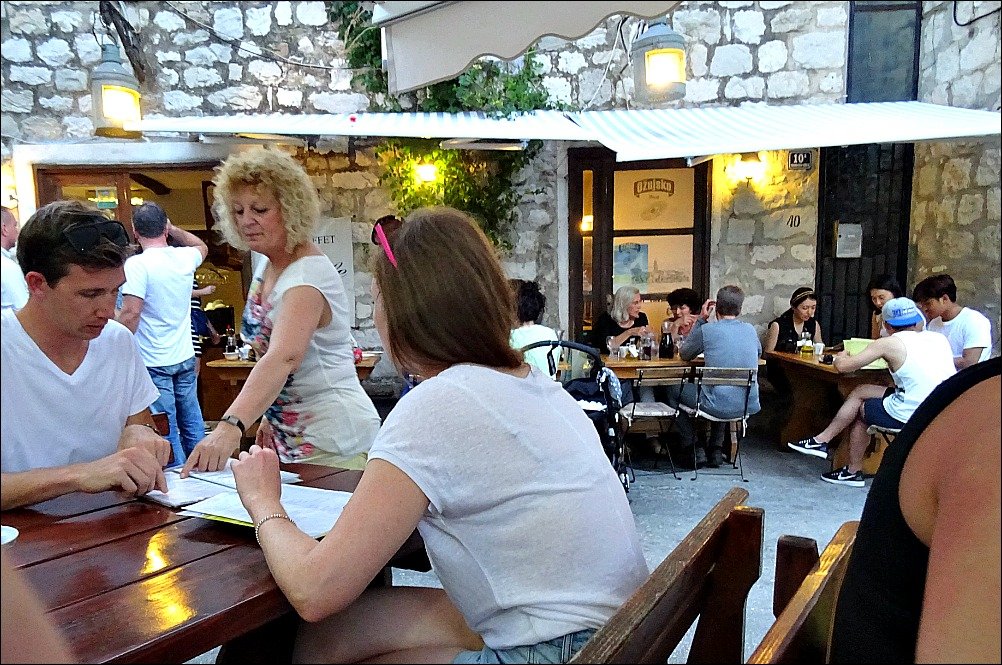 Our Airbnb host gave us several eating suggestions but Fife was his go-to choice for an inexpensive filling meal after a big day or before a night out.

From here make your way slowly east toward the Diocletian’s Palace.

First stop on the left is St. Mark’s Square…

There are a couple of noteworthy things about this square, the first being that the carved reliefs under the left upper floor windows are not repeated on the right – notice the carved Lions of Venice above the windows.

Secondly, a beautiful 4 tiered fountain by Italian sculptor Luigi Ceccona at the entrance to the square was purposely destroyed in 1947.

It was an understandable reaction to the constant reminder of fascism and occupation, but it was actually a gorgeous fountain.

Strangely but luckily some of the carved statue heads from the fountain are preserved in the Split City Museum. 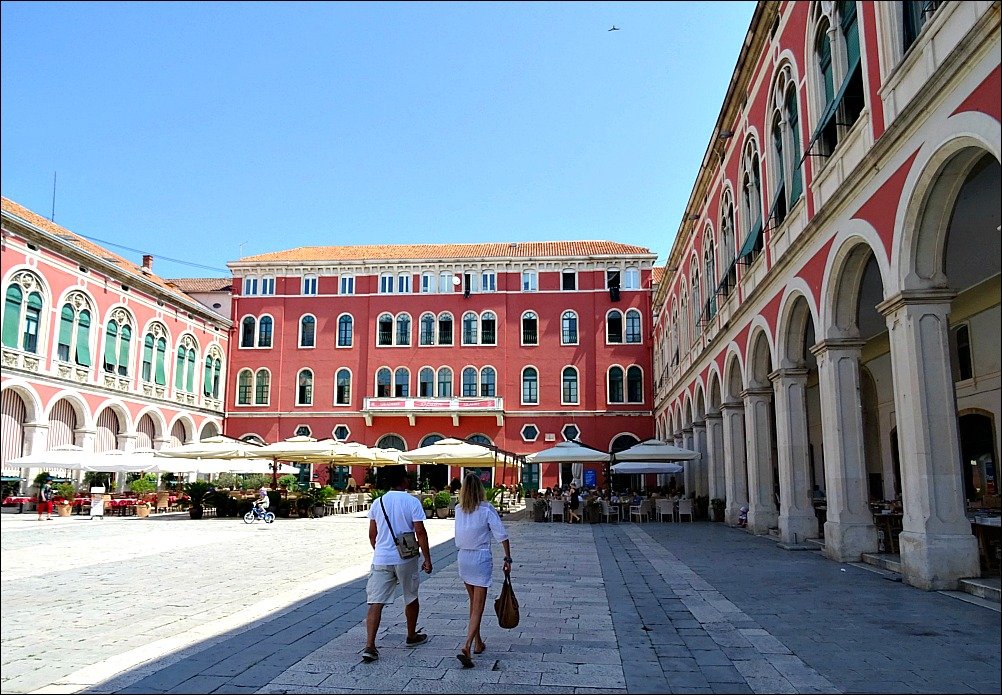 The square is expansive by any terms and is usually quite bare.

It does get used for festivals and in summer is a sea of tables and chairs. Imagine the ocean views from the theatre at the end of the square. 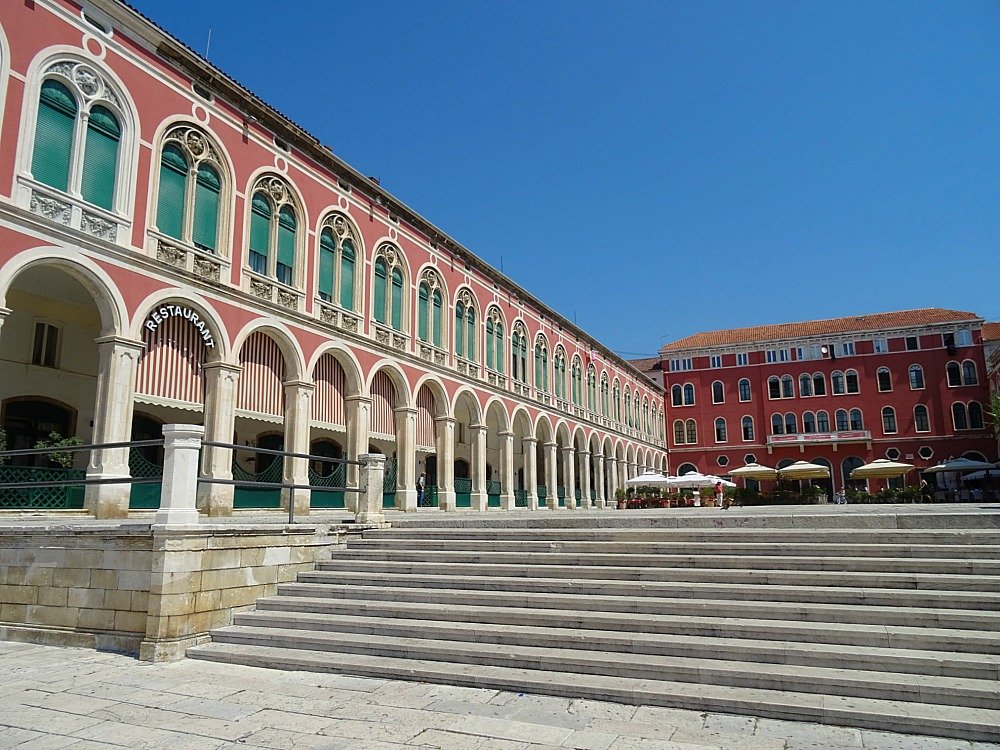 The elaborate fountain has been replaced by this minimalist creation. Can you see it?

The favourite shopping street in Split is named after a French General, who was a one time friend and aide to Napoleon. This pedestrianised street is where you will find Split’s glamorous designer shops but more importantly it is loaded with nostalgia and history.

Marmontova connects the Riva to Trg Gaje Bulata and the Croatian National Theatre.

General Marmont was in charge of Dalmatia for five years in the early 1800’s. During his time he gave the city a face-lift.

Venetian walls were torn down, electricity introduced and improvements made to the Riva and road system. He was intent on beautifying the City.

Napoleon eventually considered him a traitor and he was quite unpopular in France. It seems the people of Split continues to like General Marmont however as their favourite street still holds his name.

The Pirja Fountain on Marmontova

This is one of the quirkiest fountains I’ve seen. Created by the Croatian Sculptor and some might say comedian Kažimir Hraste, the wall fitting from where the water spouts, is a thumb protruding between the first two fingers.

This sign is known as Fig or Figa through Italy, the Baklans and Turkey and is a mildly rude gesture. It’s the equivalent of giving people the finger in other societies.

The single stream of water supposedly lands in the funnel receptor, but a couple of times since it’s conception in 1998, the fountain has been altered to improve accuracy.

It had a reputation for unexpectedly straying. 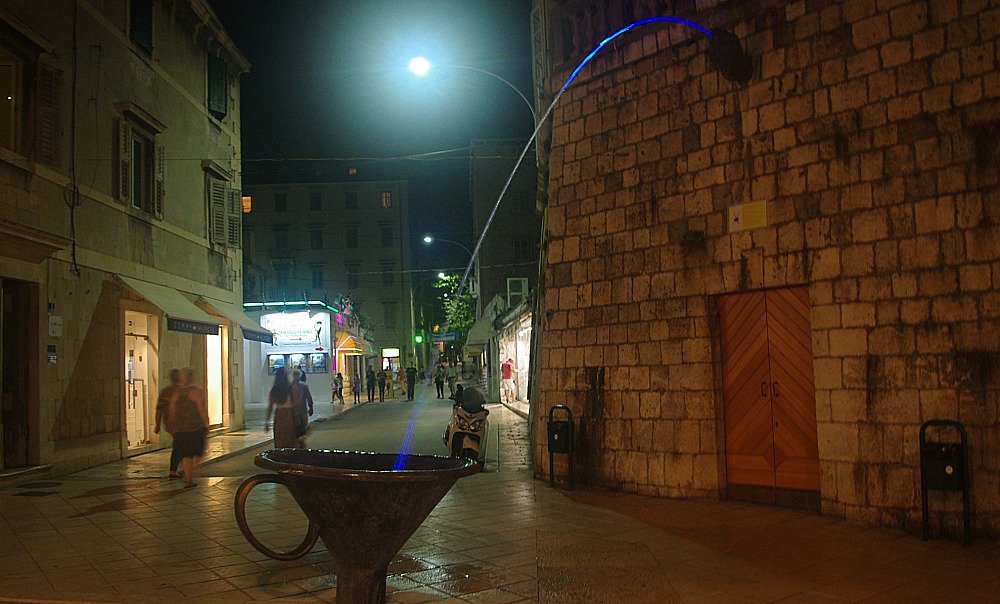 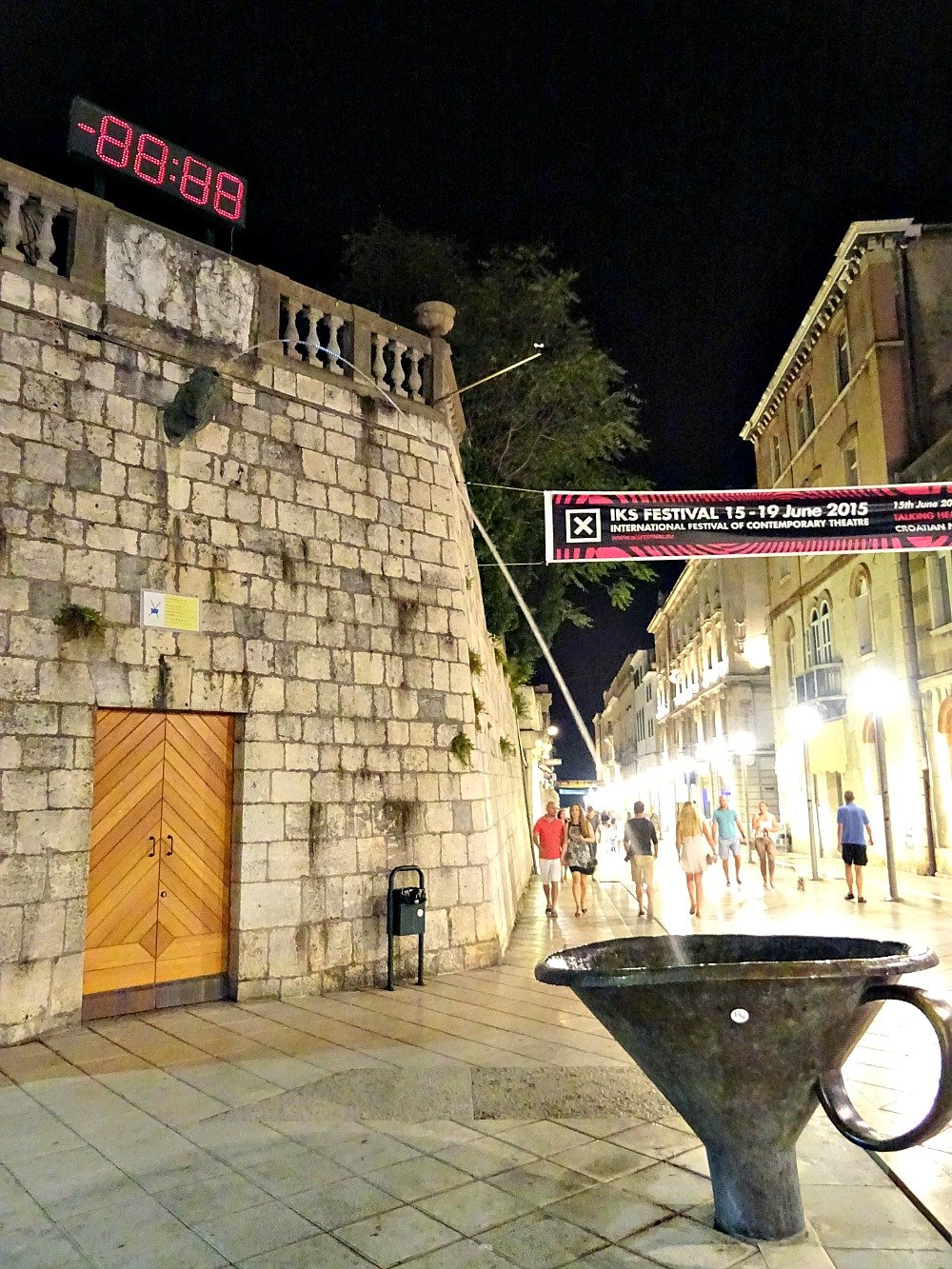 The public spa bath is located in this beautiful Art Nouveau building by local architect Kamilo Tončić. It is known for the sculptures of topless women on its façade. 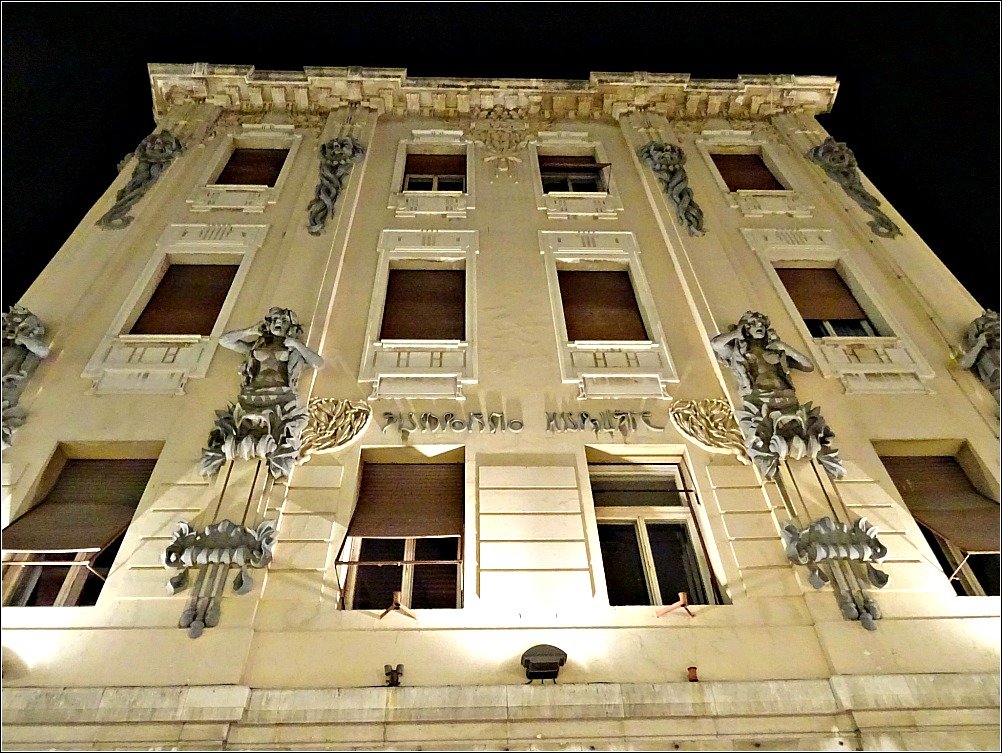 Midway on Marmontova street is the fish market or Marmontova’s belly button.

Locals credit the nearby sulphur springs with discouraging flies from congregating at the market. As we walked along the Riva we gasped at the strong smell which we at that time attributed to drain discharge from the market. In retrospect it was most likely the odour from the sulphur springs.

The Croatian National Theatre (1893) is considered one of the most impressive theatres in the Mediterranean, offering performances from Ballet and Croatian Literature to theatrical plays, festivals and orchestras.

I loved this luminous building and can imagine a crowd of theatre goers congregating outside. 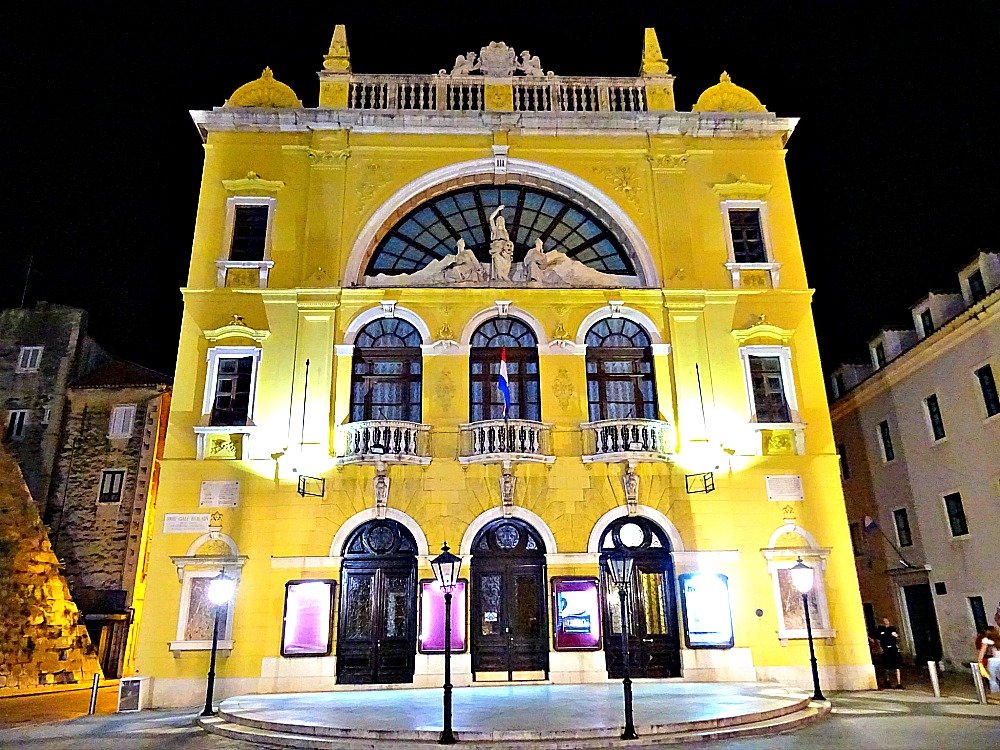 Look out for Varoš – Split’s oldest pharmacy (1856) which holds timber cabinets from the Renaissance.

Getting familiar with the area.

If you wish to explore a little more off Marmontova, or back track quickly to St. Mark’s or Procurative square (at the beginning of the tour) there are two passageways connecting Marmontova with Procurative. One of them leads off from the Fish Market.

Best Gelato in Split at Luka Icecream and Cakes

Take a look at Luka Icecream & Cakes on Facebook and you will see how much they love they pour into their craft.

I’ve gone a little off course and departed Marmontova Street, but I believe the diversion is worth it. Follow these directions from the theatre to the best gelato in Split. You will probably have to line up, which is always a good sign. The flavours are written in Croatian, but the staff offer a taste if they can’t translate.

Flavours are fresh and seasonal and include Fig, Honey, Lavender, Rosemary and Almond.

This Gelato shop opened by Polish expat Luka Klimczak in 2014, turned the Split gelato scene on it’s head. They also sell cakes including Splitska Torta but we didn’t try those here.

Marty, who spent two solid months gelato tasting through Italy, Slovenia, Croatia and Montenegro was expecting more Wow. I think his tastebuds may have become jaded because I was impressed with the gelato at Luka Ice-cream. I should add that I sampled every Gelato Marty tasted in Europe, so my reviewing credentials are impeccable.

Our choices were coconut and cookies and what we think was rum and raisin. 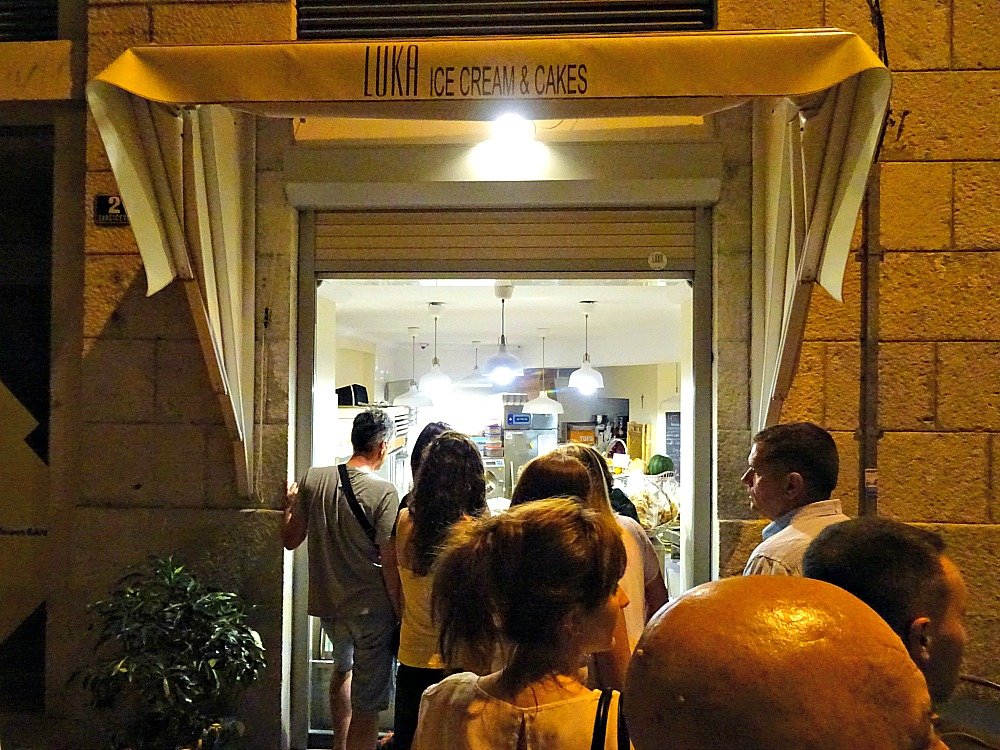 We tried Splitska Torte at Creme de la Creme and it was very good, but that Cafe has now closed.

Luka Icecream also serves Splitska Torte but we didn’t try it there.

Lately I have heard good things about Goluzariji Cafe at Ull Zrinsko Frankopanska not far from the Croatian National Theatre. They do great breakfasts and supposedly the best Splitska Torta in Split. Let me know what you think.

By all means try our two suggestions for the best Split torte, but we are firm believers in asking hosts for suggestions. Airbnb hosts are fantastic in this way, but ask wherever you’re staying. If you have never stayed with Airbnb before, remember you can get a very good discount by joining and booking through the Airbnb link in our sidebar. 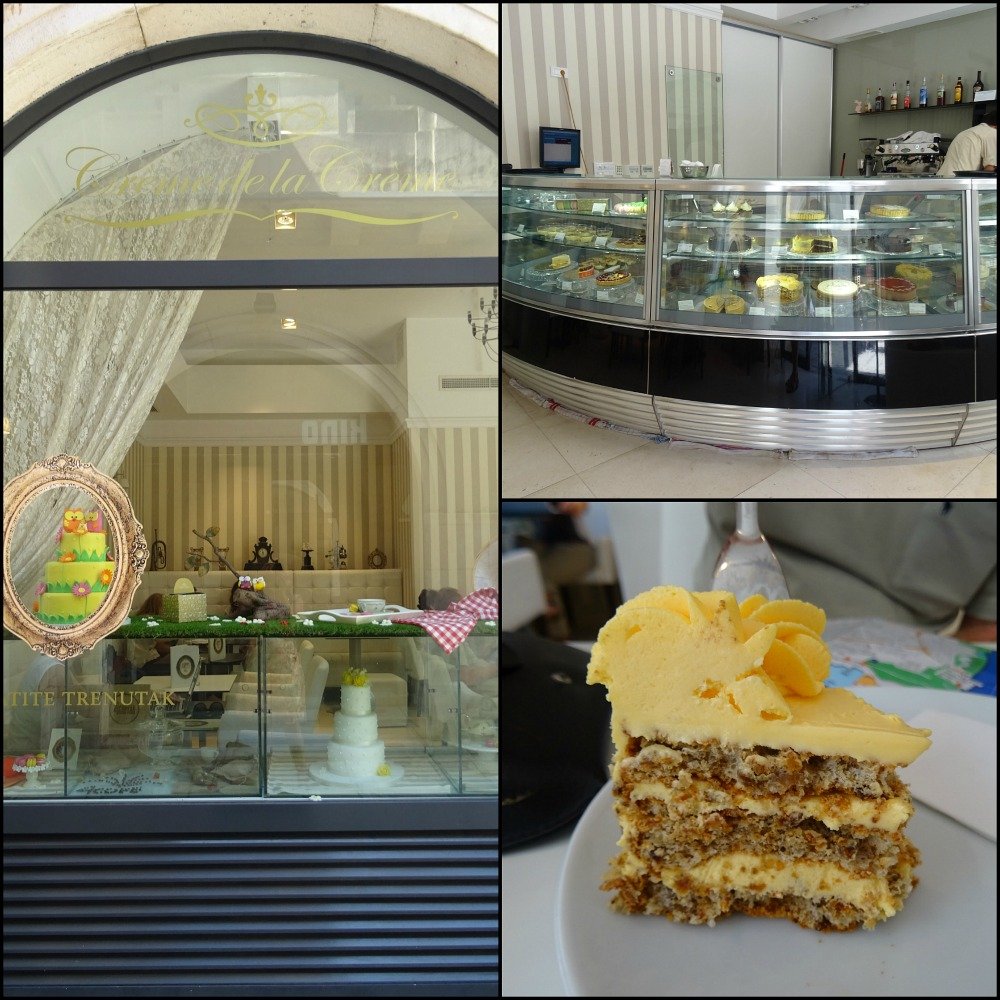 Today, the official name of the square that houses Palace Milesi – Trg Braće Radić (Square of the Radić brothers, famous Croatian Politicians) – is overlooked in favour of Fruit Square (a left-over from a time when village ladies sold their fruit here).

The Milesi Family were Split residents of Italian Heritage, their home having a 17th Century Baroque Facade, in front of which stands the statue of philosopher and intellectual Marko Marulić, sculpted by Ivan Meštrović, of Bishop Gregory of Nin sculpture fame (the huge one outside the Golden Gate of Diocletians Palace). 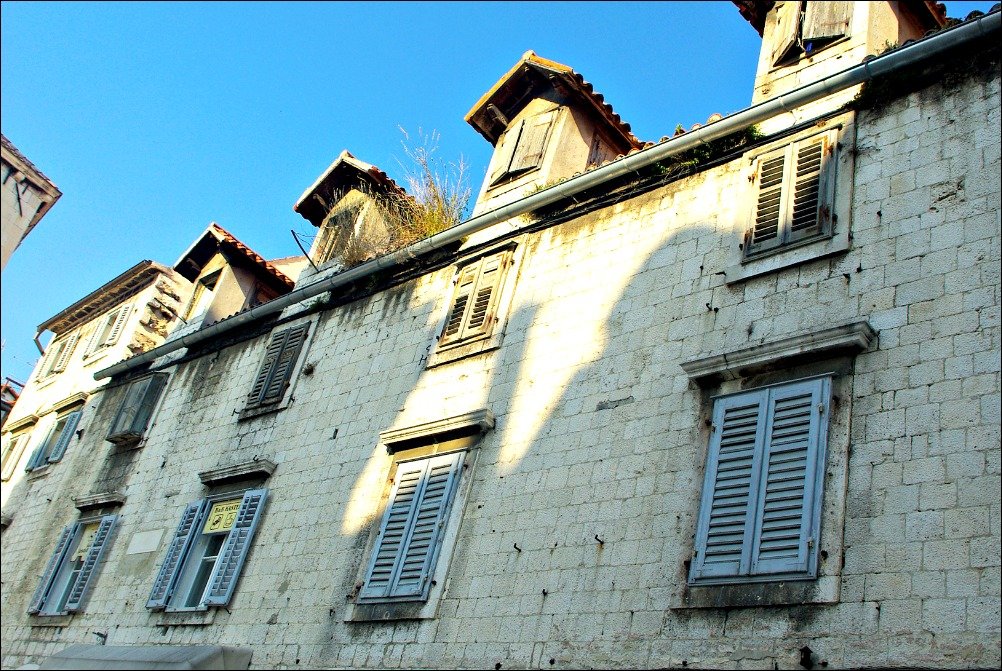 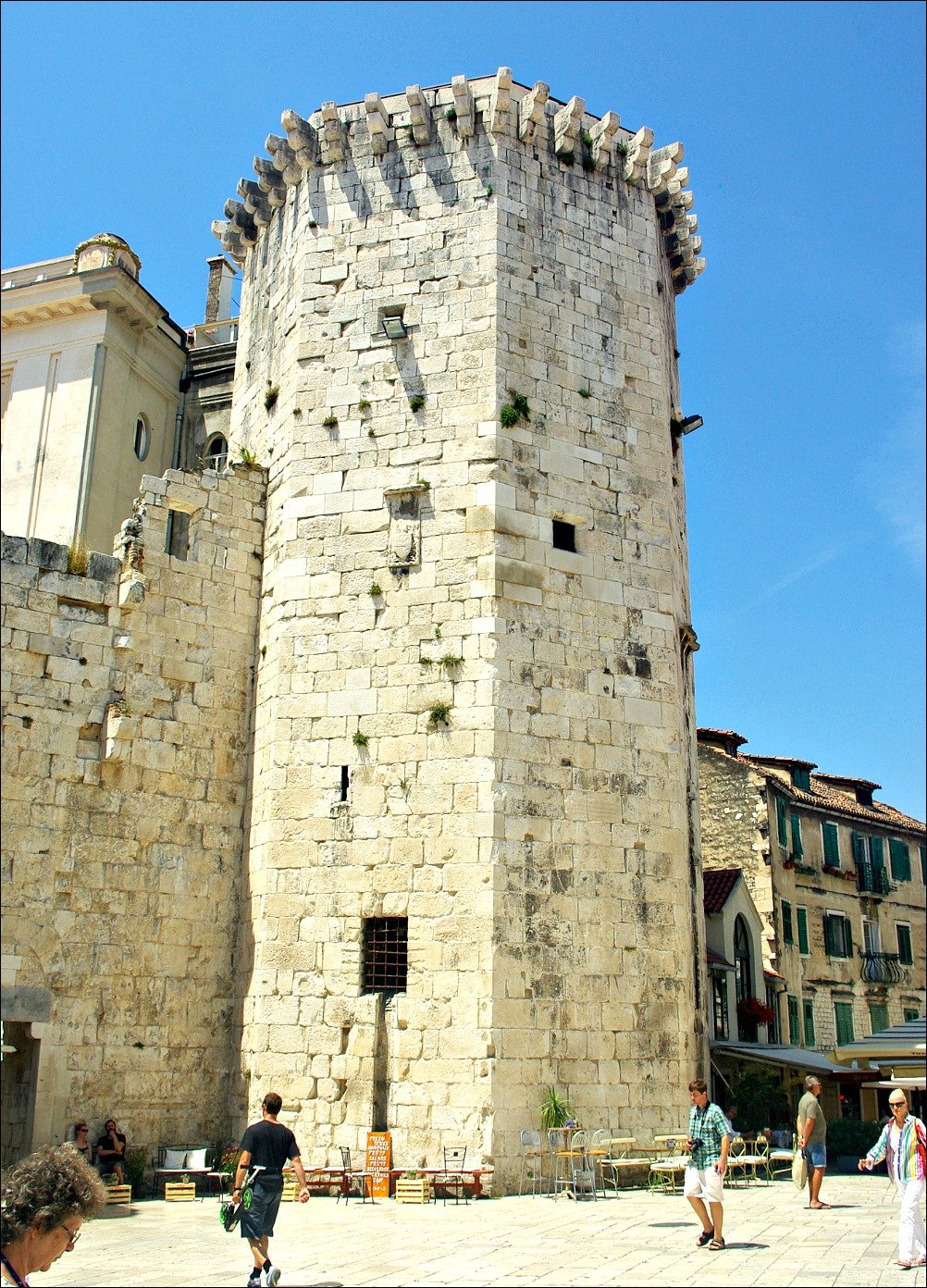 Two minutes north of Fruit Square is Narodni Trg. or People’s Square, a favourite meeting place outside of the Diocletian’s Palace walls. I wish we had more time here to enjoy a wine or a coffee and soak up the atmosphere.

15th Century Town Hall. This is my favourite building in Split. The logia on the ground floor and gothic windows make this simple architecture perfect in my opinion. 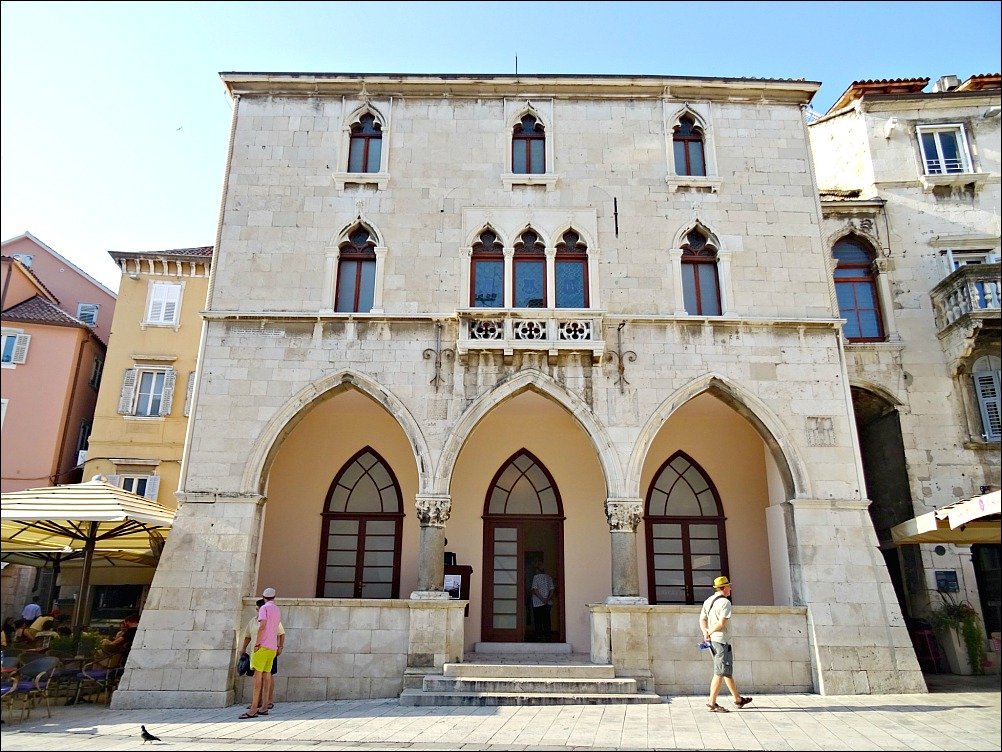 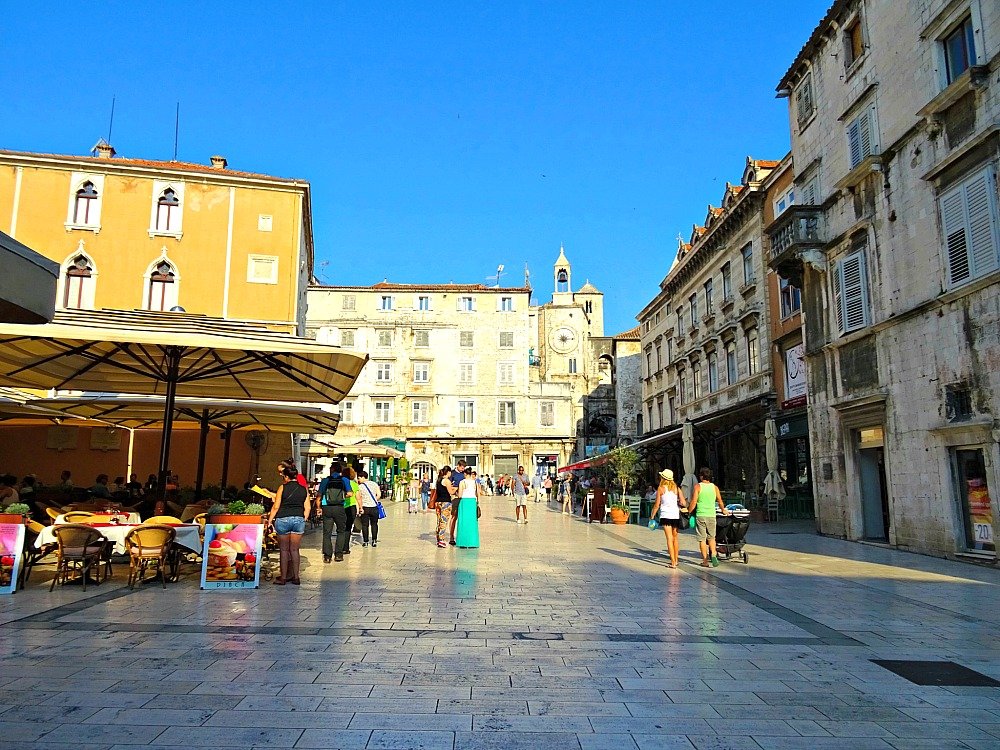 And so ends your Hooked on Split Walking Tour. At the clock tower in the back right hand corner of People’s Square, the Iron Gate connects to Diocletian’s Palace. which you can explore on another of our Split Walking Tours.

We visited Split as part of our Ten Weeks in Europe 2015 trip.

Things to do in Coolum Australia – Local Destination Guide
Next Post: Three easy Kuranda Walks on the Atherton Tablelands Queensland