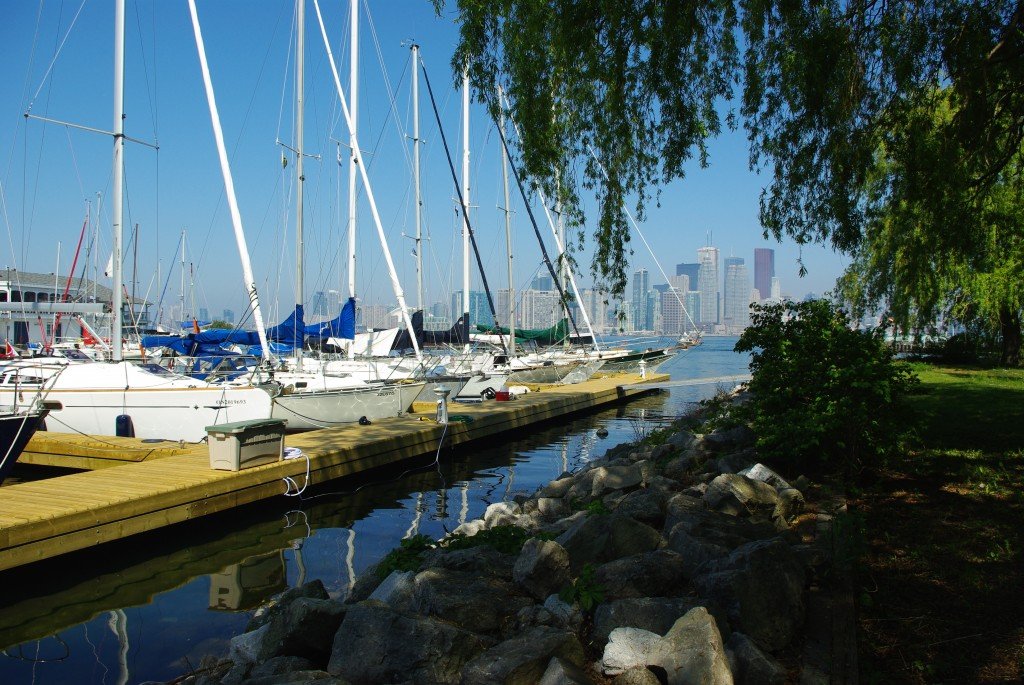 We are staying at Global Guesthouse at 9 Spandina.  The Spandina Subway Station is next door, and I mean right next door.  Our room was vibrating at 7.15 this morning.  At first we thought it was an earthquake, but then worked out that it was the trains underground making the building vibrate!

It is handy living next door to the station – we picked up a $10 family pass and caught a train to the ferry jetty.  Just in time for the 9.15 a.m. ferry which was a similar set up to the Staten Island Ferry in that you walked on one end and off the other.  15 minutes later we landed on Centre Island, part of the Toronto Island Park in Lake Ontario.  The sky had a strange haze in it, making it hard to see where the lake finished and the sky began.

At first there were hardly any people on the island, but the ferry leaves every half hour and is full every time, so before long it wasn’t so deserted.  We walked all over the place and by morning tea time had come across the Croquet Club on Ward’s Island, that served coffee and home baked muffins and cakes from the deck of the clubhouse.  Sitting in the sunshine at a timber table on a green, green, lawn we melted into the laid back island atmosphere.

I love sailing boats and in between the islands near the yacht club there were lots of sailing boats. It made me feel happy to be walking beside them.  Many had couples and families on them making the most of the now lovely day, either cleaning their boats or sunning themselves beside them on the grassed banks.  In another area there were lots of expensive motor boats, with occupants dressed in nautical looking outfits.

We came across what looked like enormous art installations.  In an expansive green parkland there were arrangements of picnic tables piled on top of each other.  The sort with the seat attached to them.  I presume they are stacked there when not in use, and this being the beginning of the season they are still there.  Huge stacks of them with just the odd one or two scattered around in use.  Have never seen anything like it before.  We had bought a picnic lunch with us so we grabbed one of the stray tables.

After lunch more walking and a nanna nap in the sunshine on a concrete slab amongst the rocks at the lake edge.  The lake disappeared into the horizon and beyond.  It is one huge lake. ( I looked it up later and found out it has a lake edge of 1146 km).  Before we knew it we had spent 6 hours on the island.  By this time we were at Hanlan’s Point which had barges coming and going that people with bikes used.  Everyone just walked on with their bikes, stood there for the fifteen minute trip and then walked off the other end.  We joined them.  The transport to and from the island worked impressively.

The haze of the morning had lifted and it was a beautiful day to be in Toronto.

COOLUM IS COOL
Next Post: ONE NIGHT IN BOWEN