Next time you are blowing out the candles on your birthday cake, spare a thought for Quebec City, Canada, (pronounced Kebec) who turned 400 years old back in 2008.  The party was huge – it lasted for a year and reportedly cost the Canadian Government a cool $110 Million.  Now that’s a party.

France and England fought over Quebec from when Frenchman Samuel de Champlain first successfully claimed Kebec for the French in 1608, until the Paris Treaty gifted it to England in 1763.  In 1775 American Revolutionaries made a bid but failed and the rest is history.  The Country of Canada was formed in 1867.

To this day 95% of the population of Quebec speak French with 79% claiming it as their mother tongue.

Six historical frescoes were commissioned in La Cite area of Quebec for the 400th Birthday, three of which are in the old quarter.  This one was my favourite.  Photo taken from the Upper City in April 2010.
[pinit] 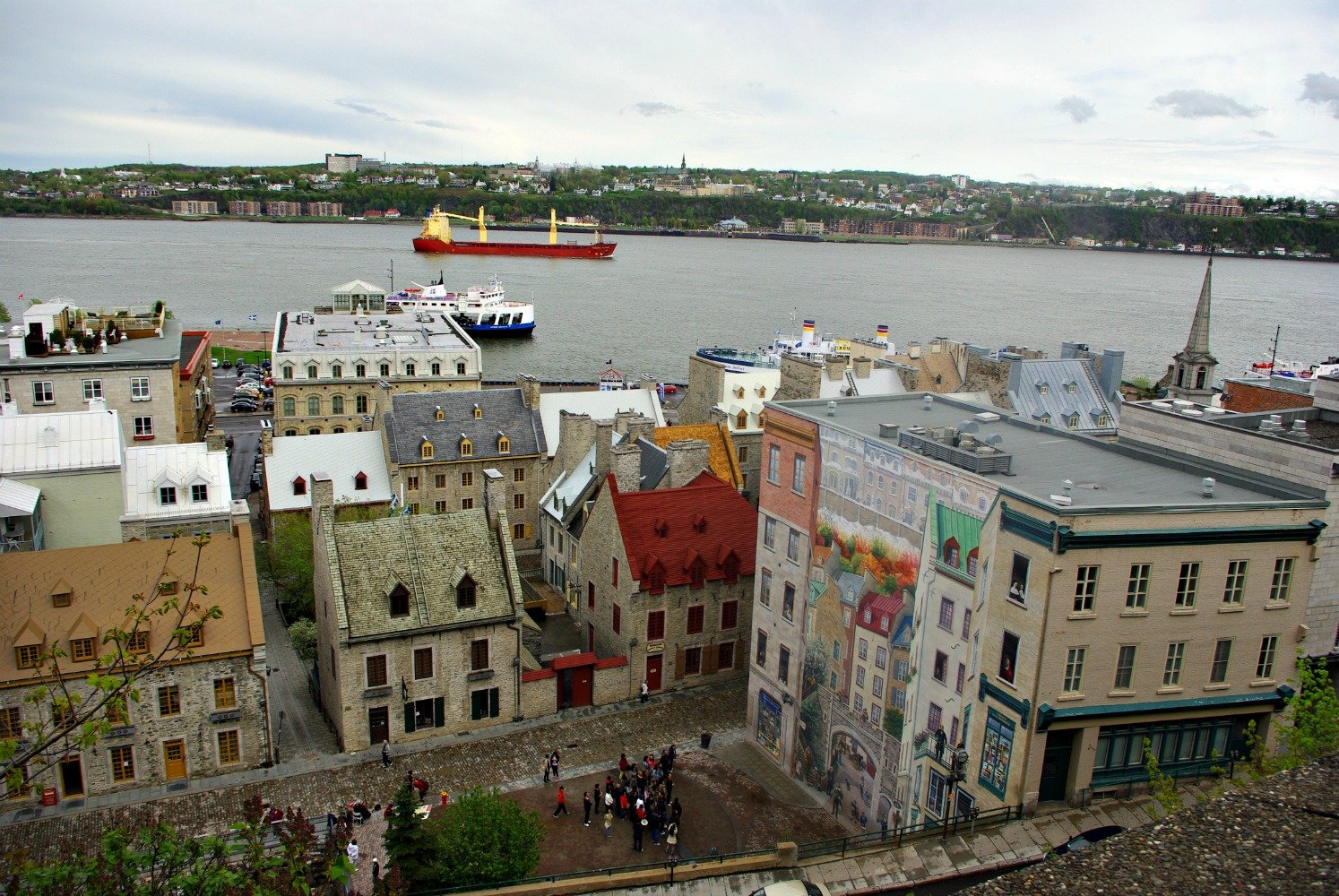 And in close up! 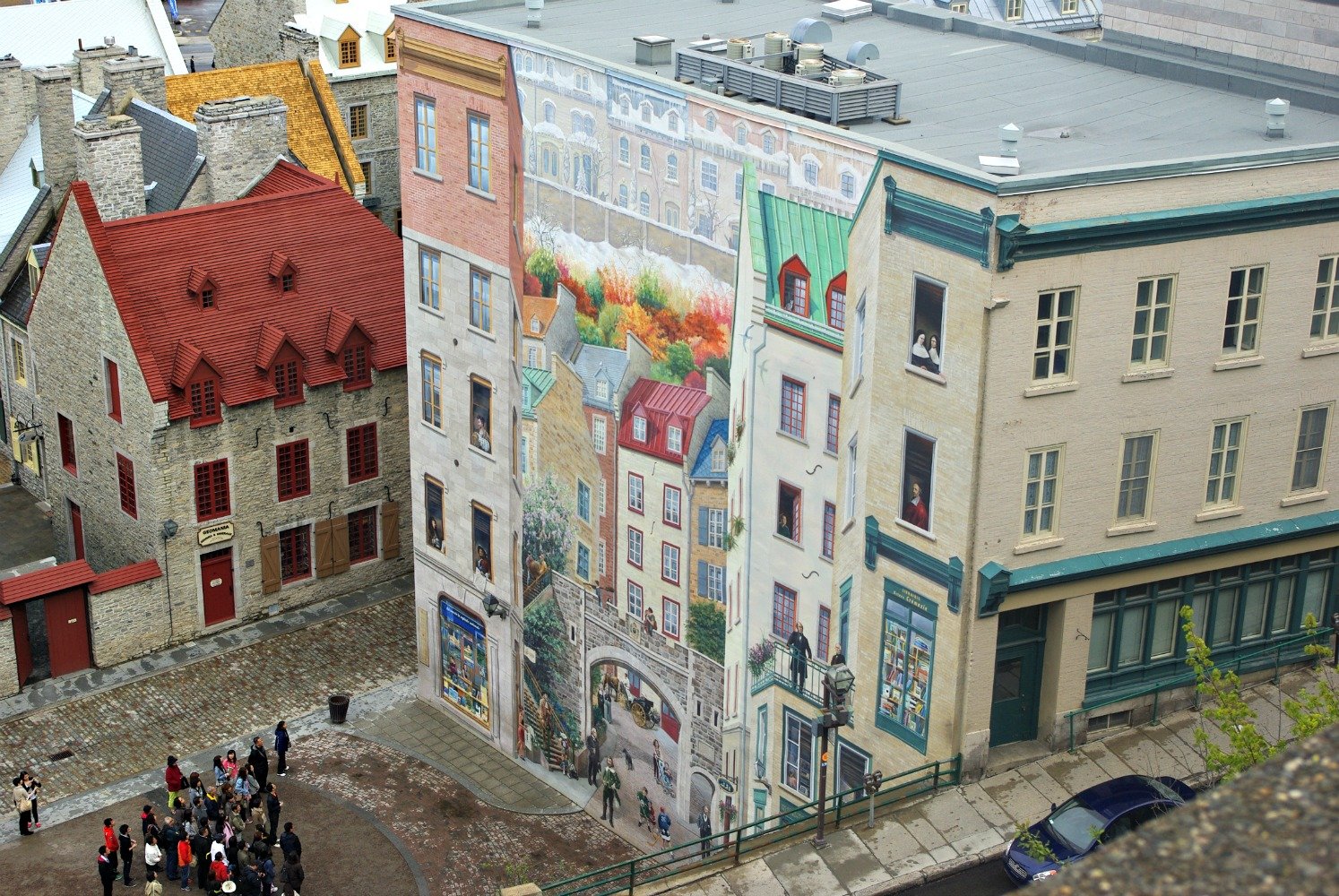 Similar to what transpired in East Village, NYC, the government in Quebec City took steps toward gentrifying the St. Roch area of Quebec City.  Originally depicted by factories and workers cottages, it had became a haunt of the down and out, but in the year 2000 changes were in the air.

Among other things, artists were hired to paint frescoes depicting fantastical landscapes on the concrete pillars under the Route 440 overpass at the edge of the neighborhood.  Maybe the powers that be were working on the theory that when artists move into neighbourhoods, those places naturally become creative and desirable places in which to live.

Route 440 Overpass – The gateway to the now trendy suburb of St. Roch. 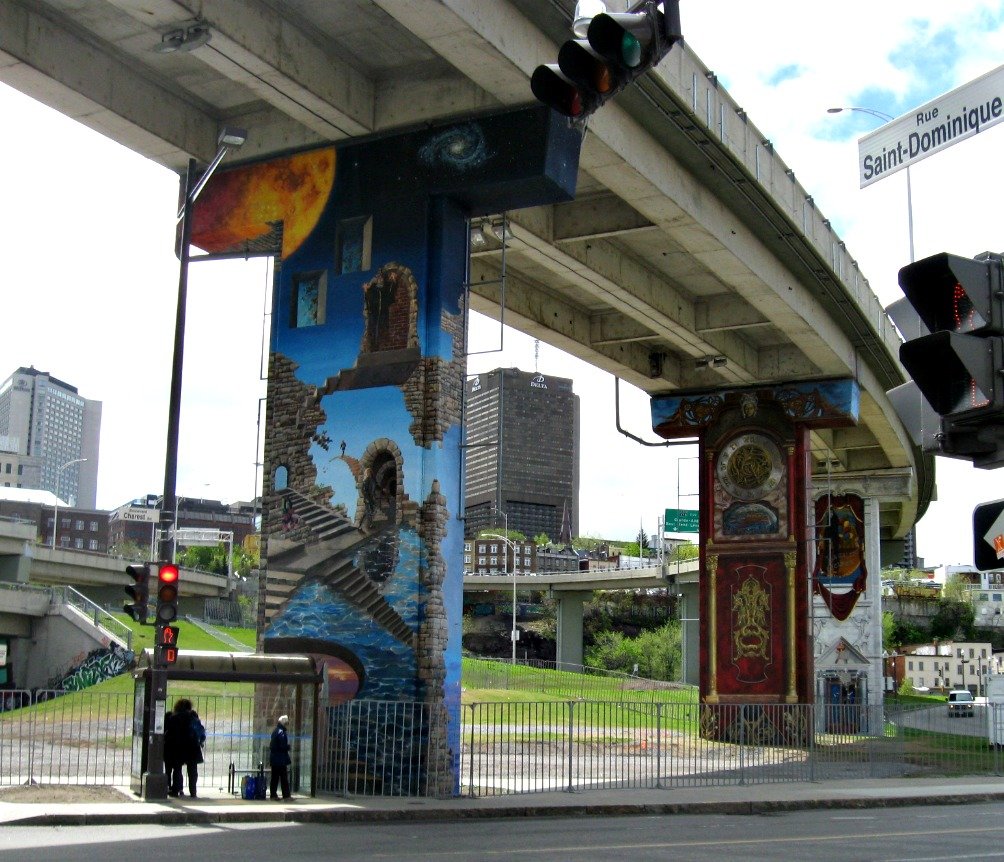 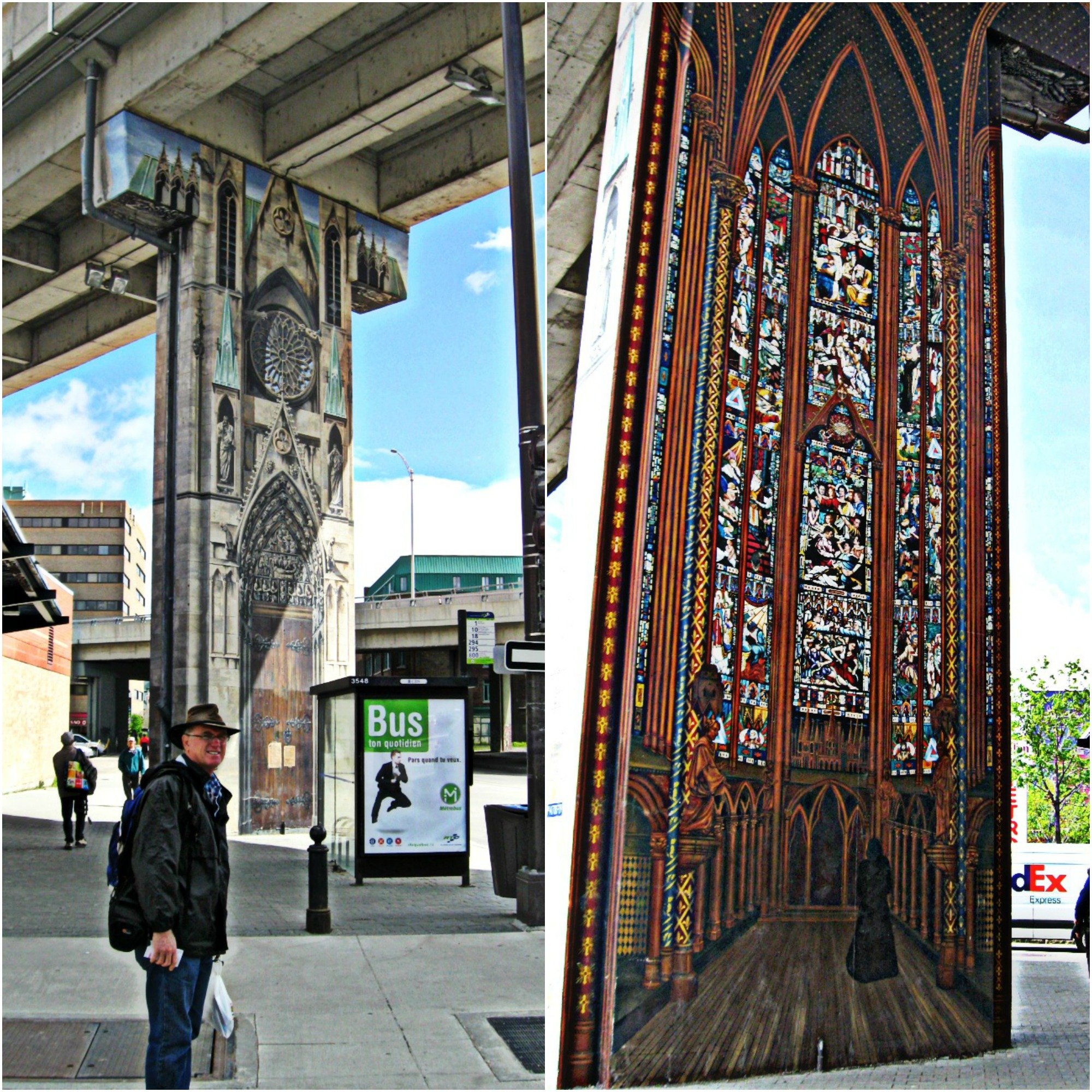 The buildings themselves held a real fascination for me. 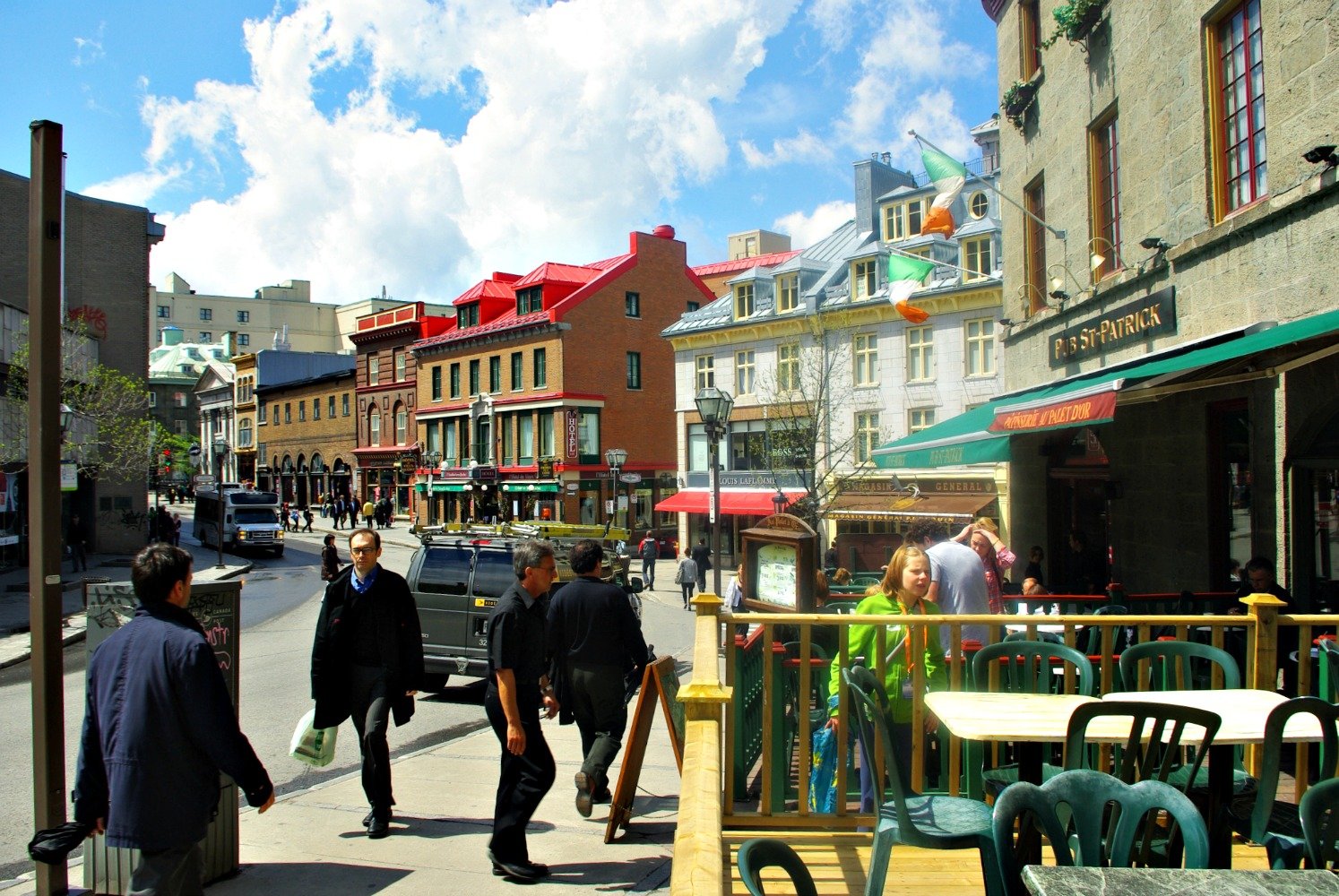 We stayed one week in a lovely St. Roch apartment.  Totally fascinated by the exterior of our accommodation, it wasn’t until we ventured to the suburbs that we discovered, our rustic looking house was not the norm. 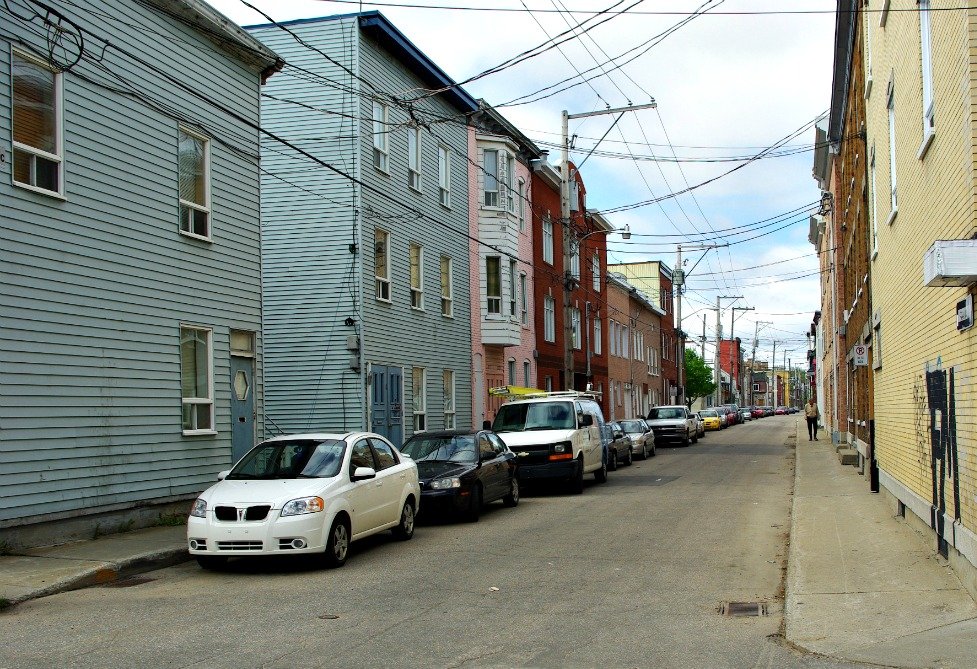 And then there were the defensive walls. 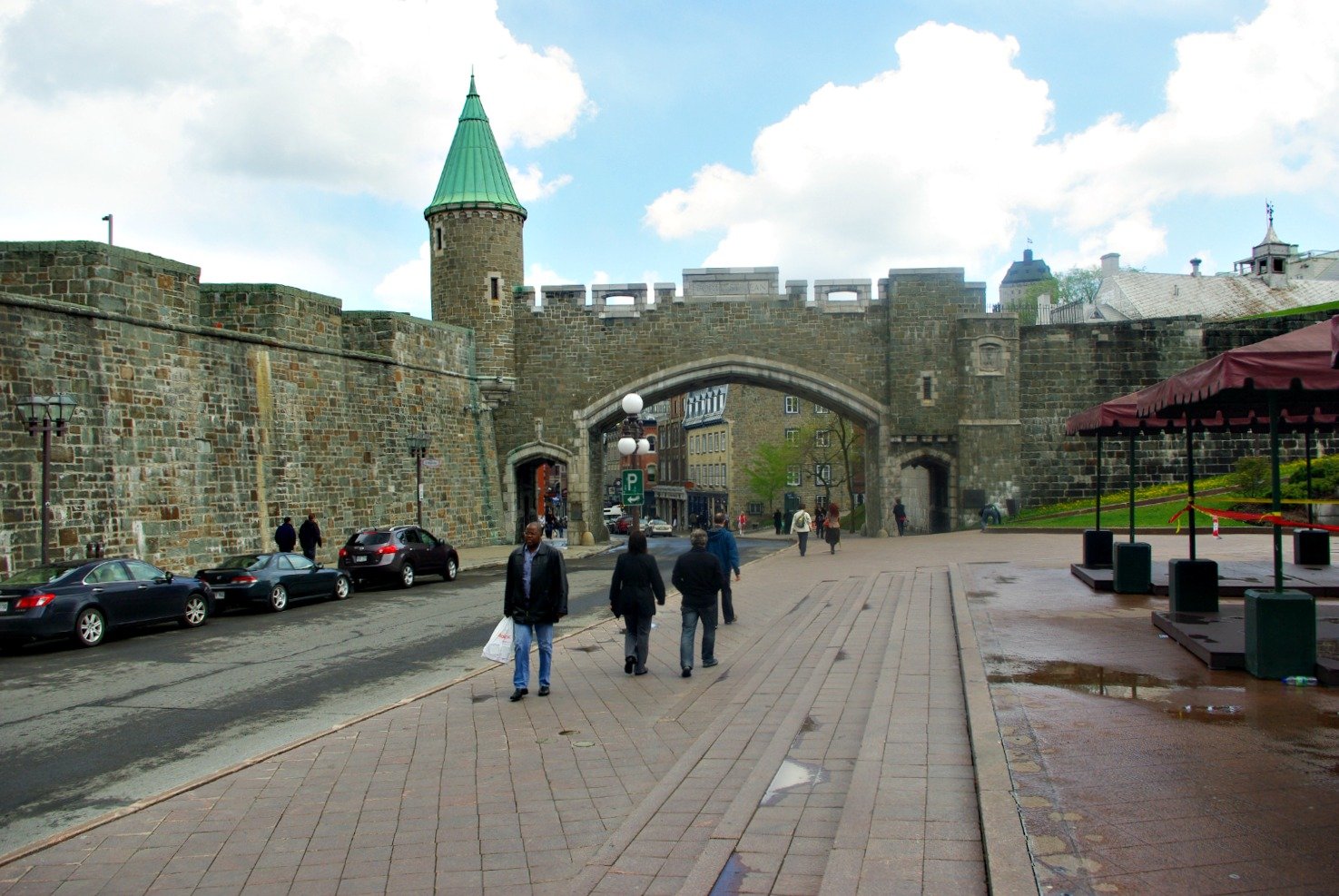 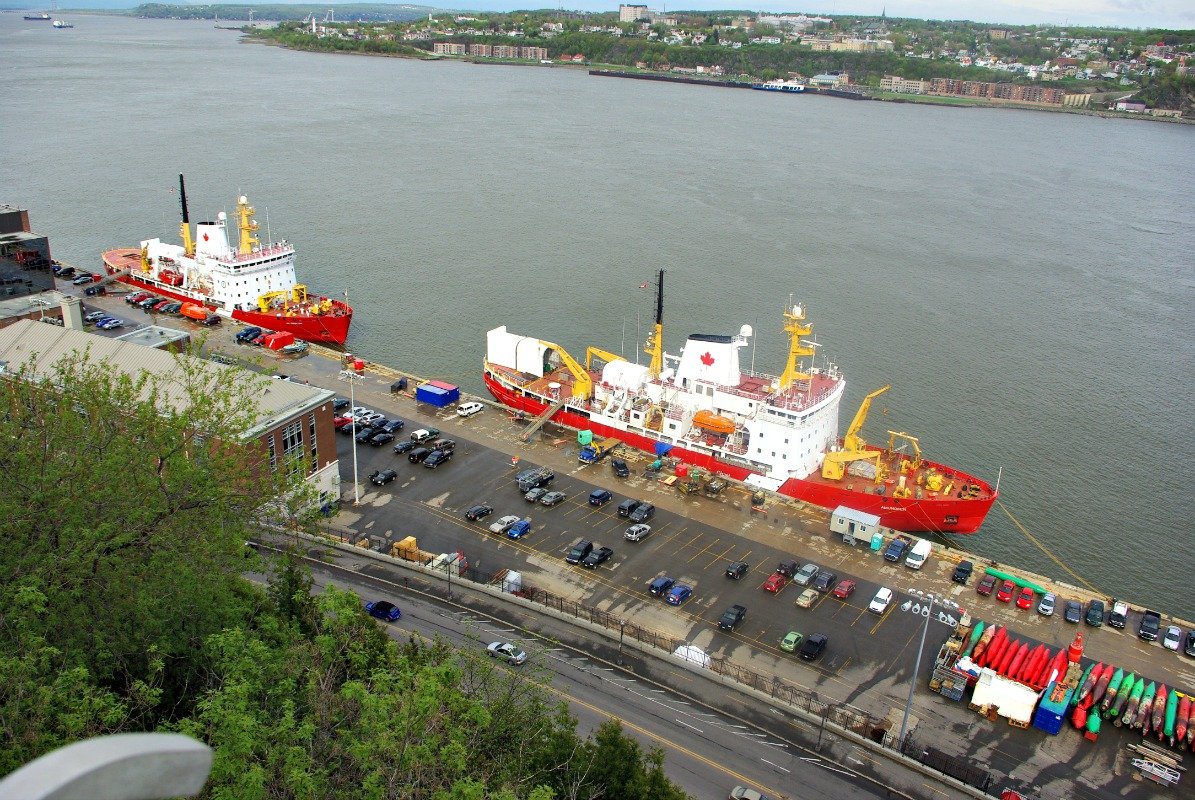 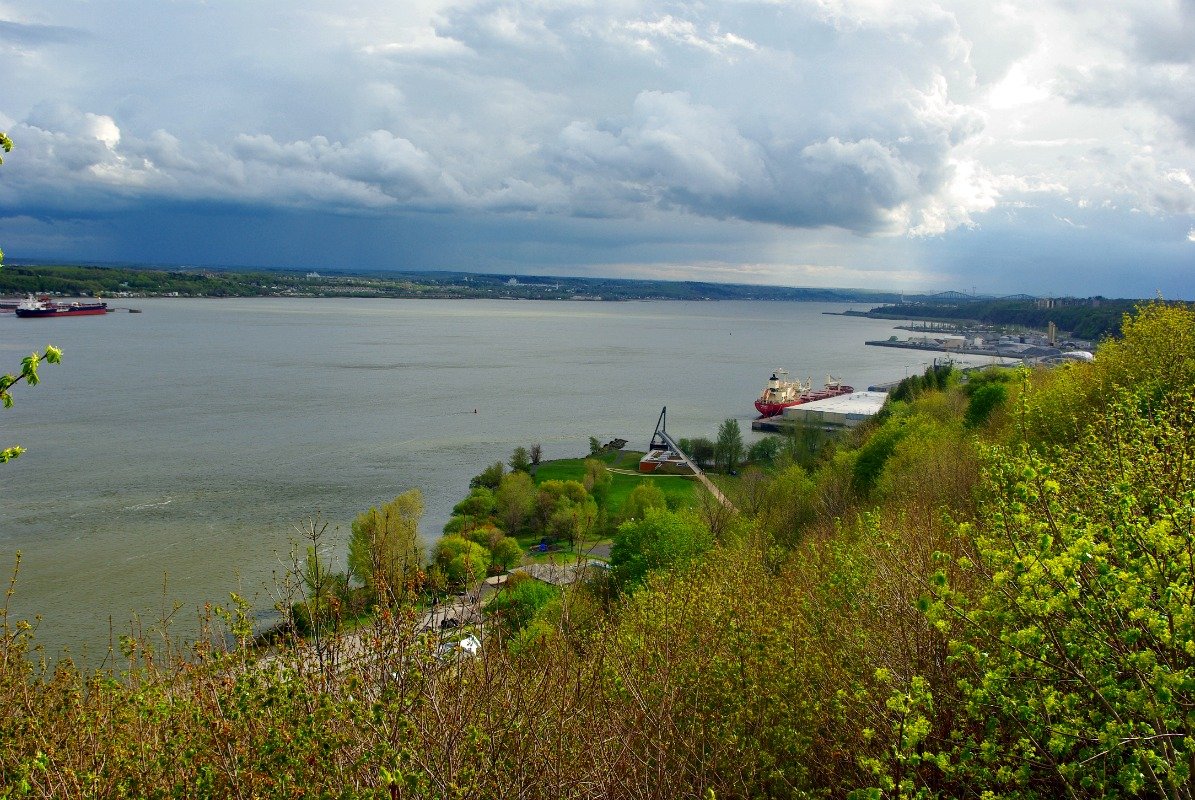 Presiding over city and river from atop the cape was Château Frontenac opened in 1893, six years after it’s sister hotel in Banff.  The most photographed hotel in the world the Chateau hosted WWII Strategy talks with Winston Churchill, Franklin Roosevelt and Mackenzie King, and the making of a Alfred Hitchcock movie.  In 2011 work began on replacing the copper roof of the main tower for an estimated 7.5 million dollars. 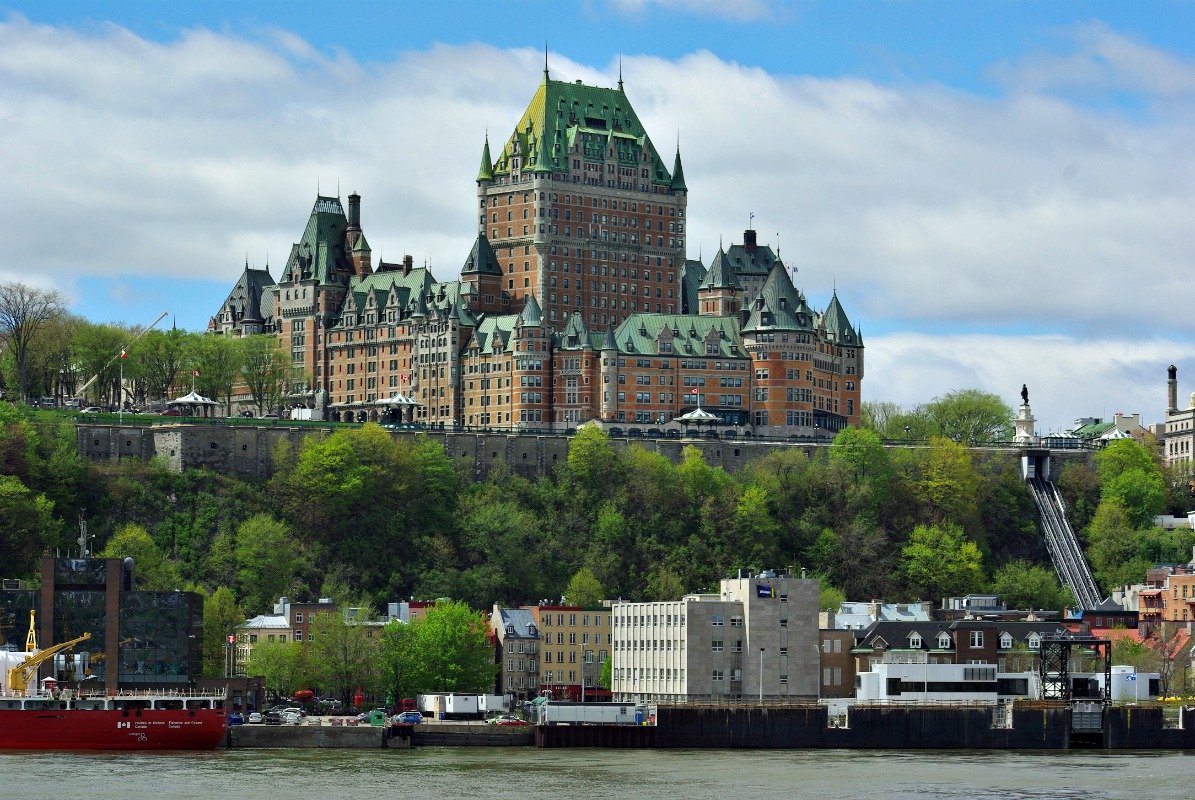 Quebec City was Quaint, Chic, and most definitely Romantic, but most of all it was a uniquely French Canadian City.

We stayed at this ST. ROCH APARTMENT.  Sarah the owner speaks English as a first language and of course French!

Quebec City is famous for it’s WINTER CARNIVAL. Change the site to English if like us you’re not bilingual.

We found United Airlines was the cheapest direct flight from Newark (NYC) to Quebec City.  All other forms of transport seemed to arrive via Montreal or Toronto.   We thought it made sense to start on the East and make our way to Montreal and Toronto.

The Tourist Information Office on Rue Ste-Anne in the old upper town was super helpful.

We were there in late April and it was a mixture of cold windy wet and sunny.

Musée de la civilisation is FREE on some Tuesdays and Saturdays.

This week on Budget Travelers Sandbox TRAVEL PHOTO THURSDAY Nancie has featured some fantastic bridge photos.  As well there are travel photo link-ups from around the world.