The historic district of LUANG PRABANG IN LAOS, sits on a high headland overlooking the meeting of the timeless Mekong and its younger sibling the Nam Khan.

At first we had dreamed of entering the Land of a Million Elephants via Thailand, spending two long days on the Mekong, floating downstream from Huay Xai to Luang Prabang.  But time decided otherwise and Bangkok Air filled the gap.  We expected the air quality to improve as we left Bangkok and flew across country but the reverse happened.

In April 2010, smoke from slash and burn agriculture hung low over Luang Prabang, trapped in the Mekong River valley by the surrounding mountains.  Only rain would clear the air and give relief from the 40 plus temperatures – but none came.

Our photos reflect the ever present spooky glow that limited our vision.

Spooky glow or not, a Mekong river trip was still high on our wish list, and the morning of our second day in Luang Prabang found us short-cutting with guide through the grounds of a local Wat, to join a group of about thirty travellers, on the banks above the Mekong, downstream from where it met the Nam Khan.

Discussion at the communal breakfast table at Manichan Guesthouse that morning had concluded that the trip to Pak Ou Caves, was one of those where the journey surpassed the destination.

Great – I loved river journeys and the caves were to my mind, incidental.

On our way to the river, the newly formed group bonded.  Having booked with the same agency I assumed we would be in the same boat.  But No.  In the mysterious way things sometimes unfold in Asia, passenger’s names were called at random from a predetermined list, upon which they walked a lonely walk to the edge, descended a few steps and promptly disappeared from view.  There were nervous jokes all round.

Our boat’s manifest was multi-national.  Two from Australia (Marty and I) and one each from Thailand, China, France and U.S.A.  As the boats were tied side by side, it was necessary to climb through all to reach the outer one.

Ours was the first boat, so we necessarily departed last.

Finally it was our turn to cast off and I couldn’t have imagined a more interesting mix of moored boats to line our route.   There were working barges, boats sporting elaborate balustrades and I was just considering a large box of a boat as we pulled up at a floating petrol station.

With fuel in the tank, we continued upstream close by market gardens.  At the end of the dry season the river was low but I imagine these gardens would be covered by water in a matter of weeks with the arrival of the wet season.  Close to the river the land is fertile, watering is easy and a stick fence helps keep animals out of the crop.

I was in heaven being so close to such a variety of river craft. 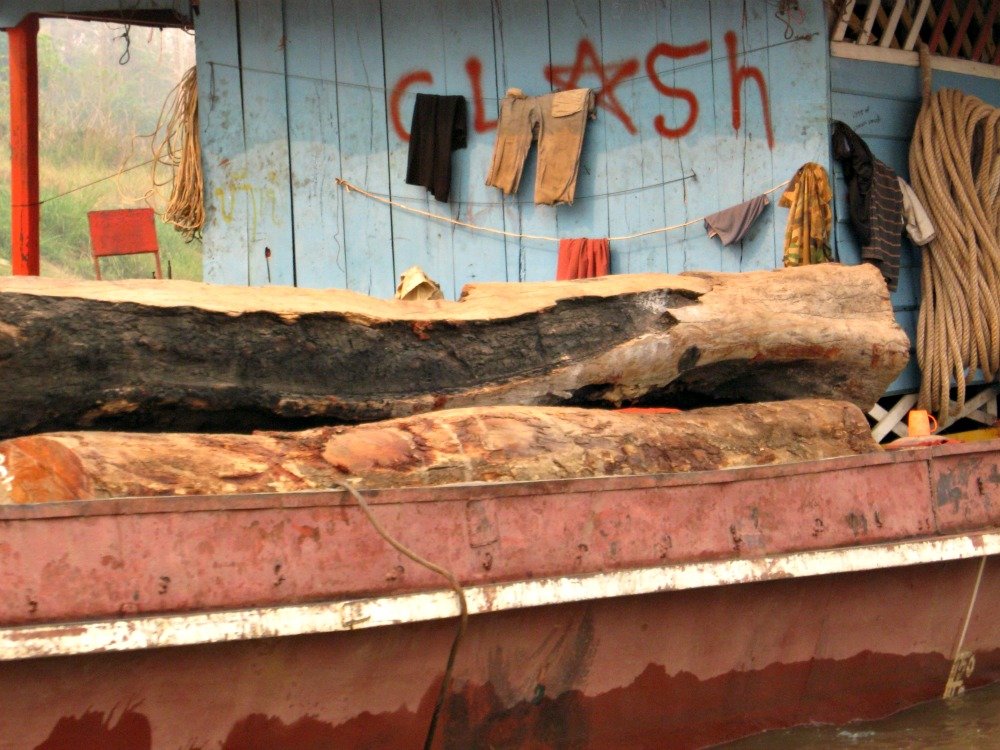 Just as we joined the faster moving midstream current the boat’s engine faltered, then stalled.

Our driver had no English, but we understood.  Continuing to turn the engine over, he coaxed it back to life amidst an impromptu round of cheers.  But then a cough, a splutter, and a final silence.  We were an hour upstream of Luang Prabang as our driver paddled us toward the shore.

Our driver worked hard on the motor before admitting defeat.  I am not sure of his thoughts as he later sat with head in hands, but I had a sneaking suspicion it was a bad batch of fuel.

Have you experienced a transport malfunction in your travels?

Marooned on the Mekong Part 2

To see some other inspiring travel photos click on the link to TRAVEL PHOTO THURSDAY AT BUDGET TRAVELERS SANDBOX.   Marooned on the Mekong Part 2

Tuesday in Townsville – Outriggers and Stingers on The Strand
Next Post: Fantastic Friday Laos Rooster