Updated July 2018. The Heaven and Earth Bicycle Tour Hoi An was our favourite thing to do in this charming town. Ride through both the town and country visiting local industries, including boat building, mud brick making, mother of pearl inlay work, fishing nets and fishing baskets.

The Unesco heritage listed buildings of Hoi An showed their age but were in remarkable condition. 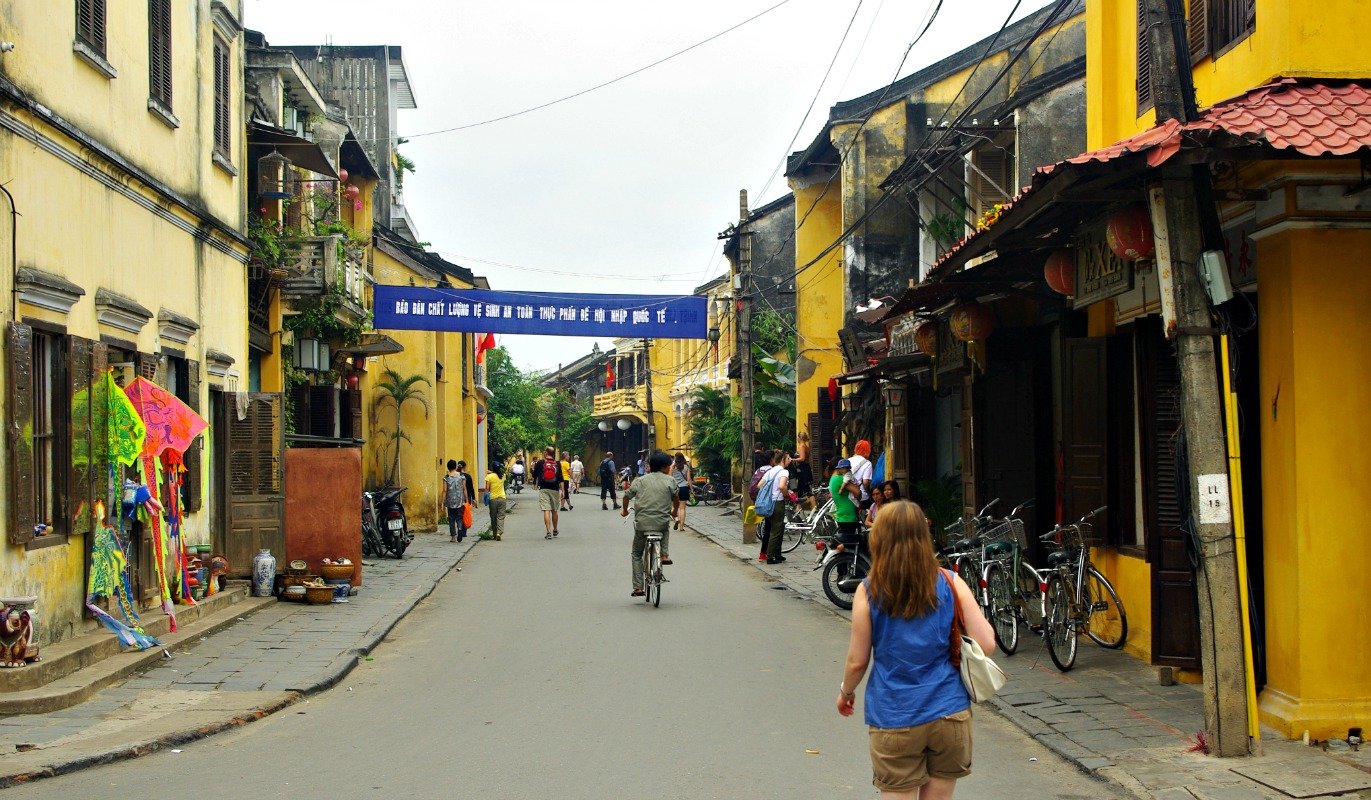 Our bicycles were loaded on to the ferry – Hoi An Riverfront. 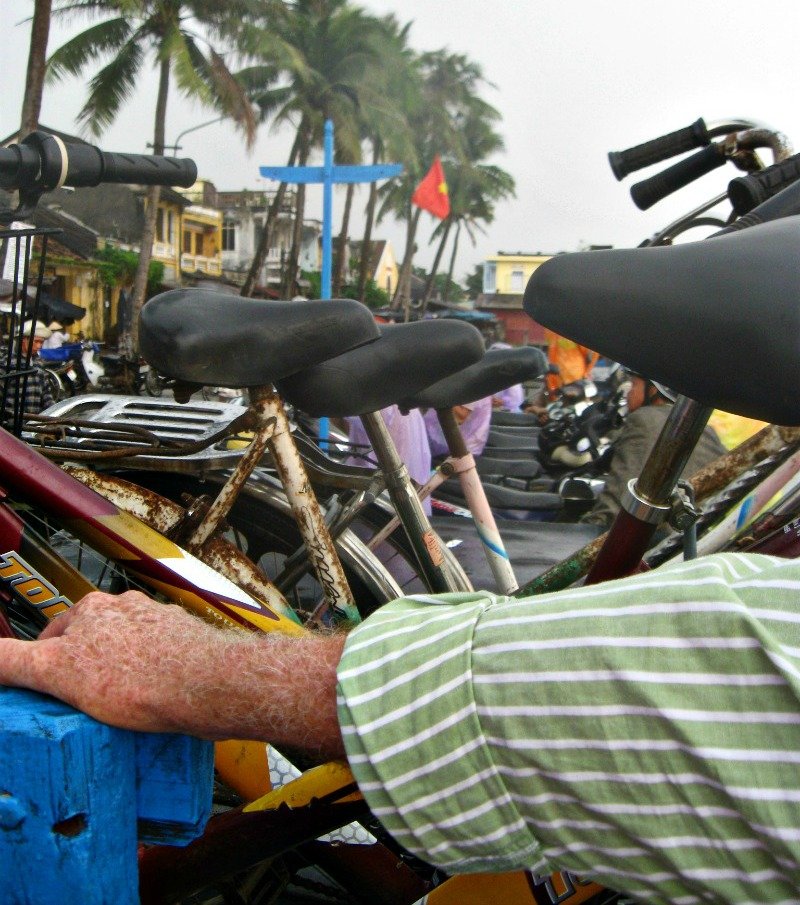 The Market Stall at our Morning Tea Break 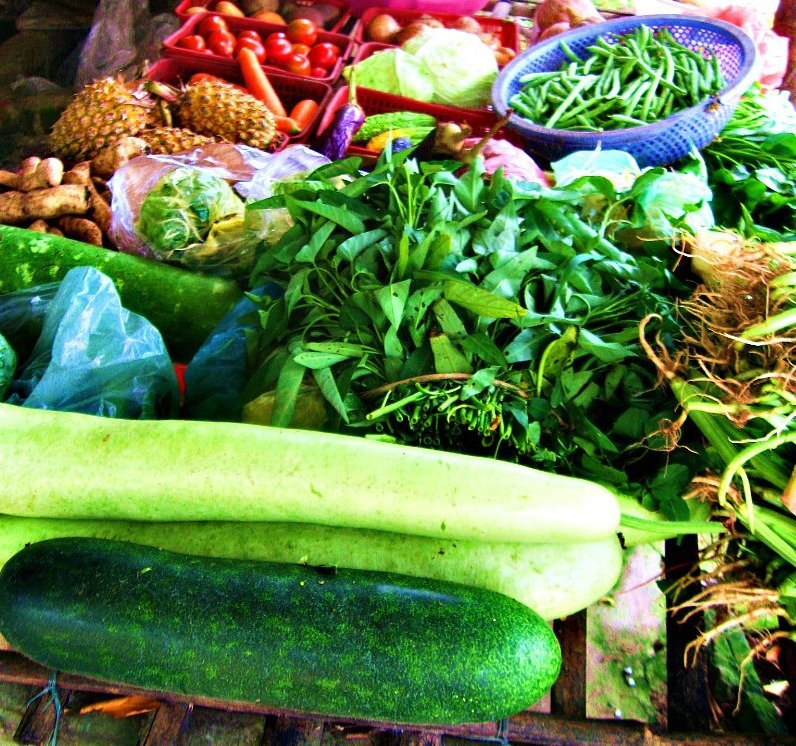 Lan, our young Vietnamese guide, spoke the best Australian of any I had heard in our month in Vietnam.  As well as being a wonderful source of information, she had a wicked sense of humour, that kept us entertained all day.  Her side kick Phuong, another young Vietnamese woman, was the Ying to Lan’s Yang – a gentle and helpful assistant.

Sampling Peanuts straight from the ground. 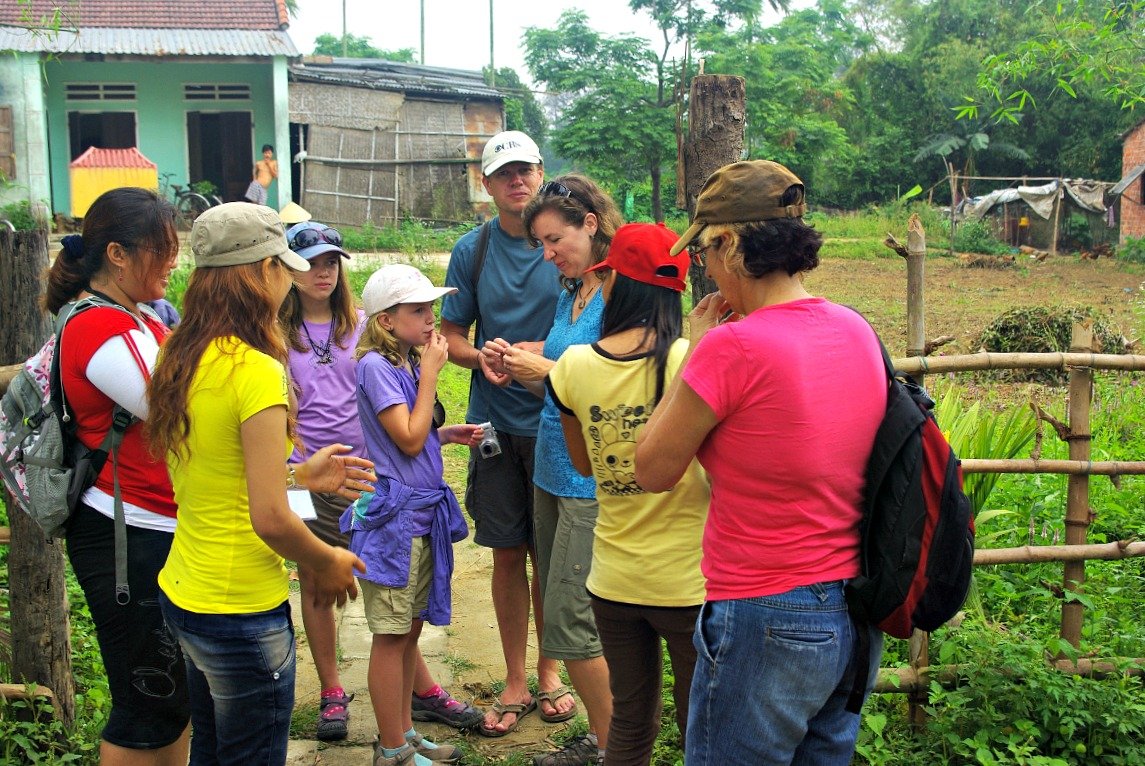 That morning before we had left our guesthouse, Hoang Trinh, there had been an early morning rain storm.  Dodging rivulets on the streets, we raced over the famous Japanese Bridge, then minutes later crossed the An Hoi Bridge over the main part of the river, that led to Heaven and Earth’s Office at 57 Ngo Ouyen.

No Plans used for these boats – just knowledge passed down the generations. 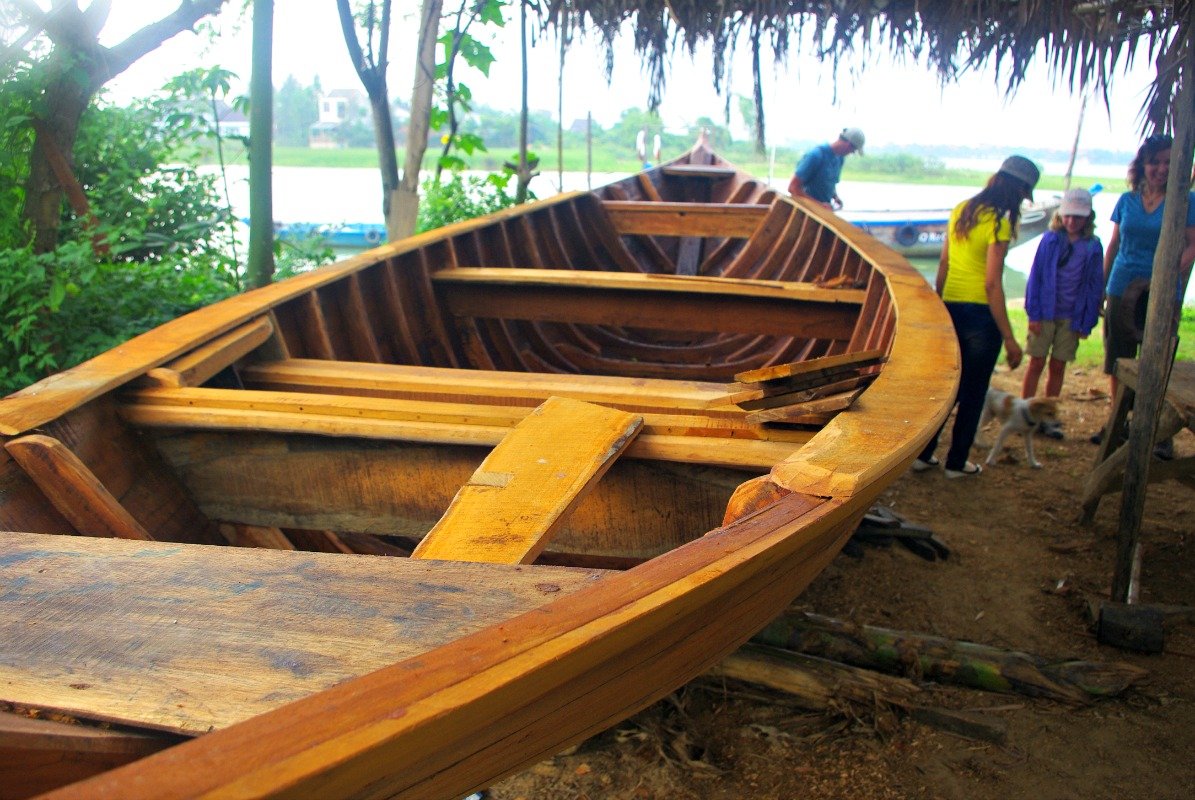 A lifetime of punctuality made me eager to arrive on time, but bikes were being tried out for size and raincoats distributed when we arrived 5 minutes late.  Some people had cancelled (because of the rain) much to Lan’s dismay, but we were happy with the final group size – an American/Swedish family with two daughters, a girl from the Philippines and ourselves.

Many times I have seen mother of pearl inlaid on boxes, but had never realized the craftsmanship required to make them. 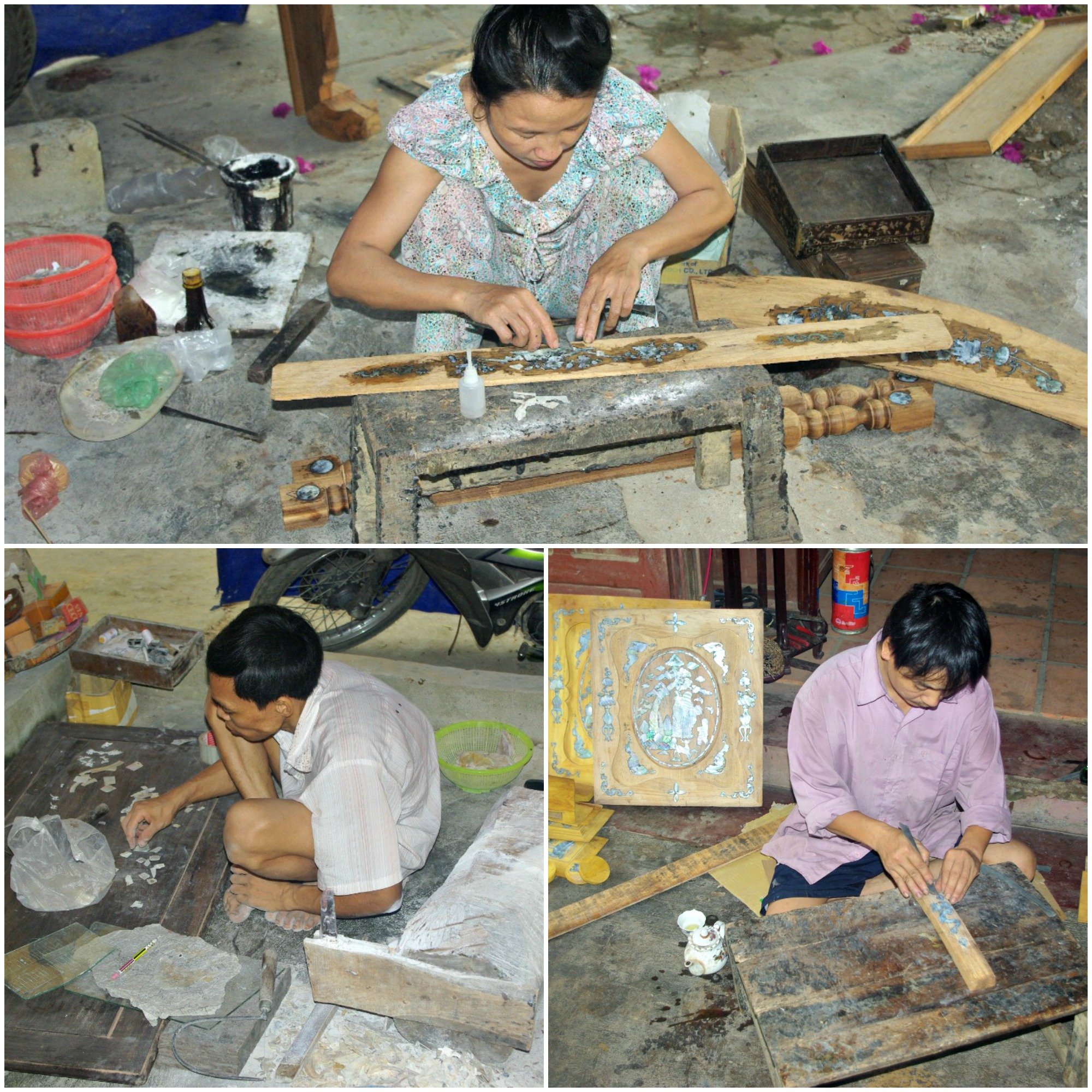 We retraced our route through the streets – this time by bicycle – back over the An Hoi bridge but this time turning right, through central Hoi An to the food market, on the banks of the Thu Bon River.  Back in the day, sailing boats from Europe, China, India and Japan would have been tied up along this same stretch of river.

These fishing baskets are widely used in Vietnam.  The exterior of the ones we saw on this tour were varnished, but north of here at Cat Ba Island they were tarred to make them waterproof. 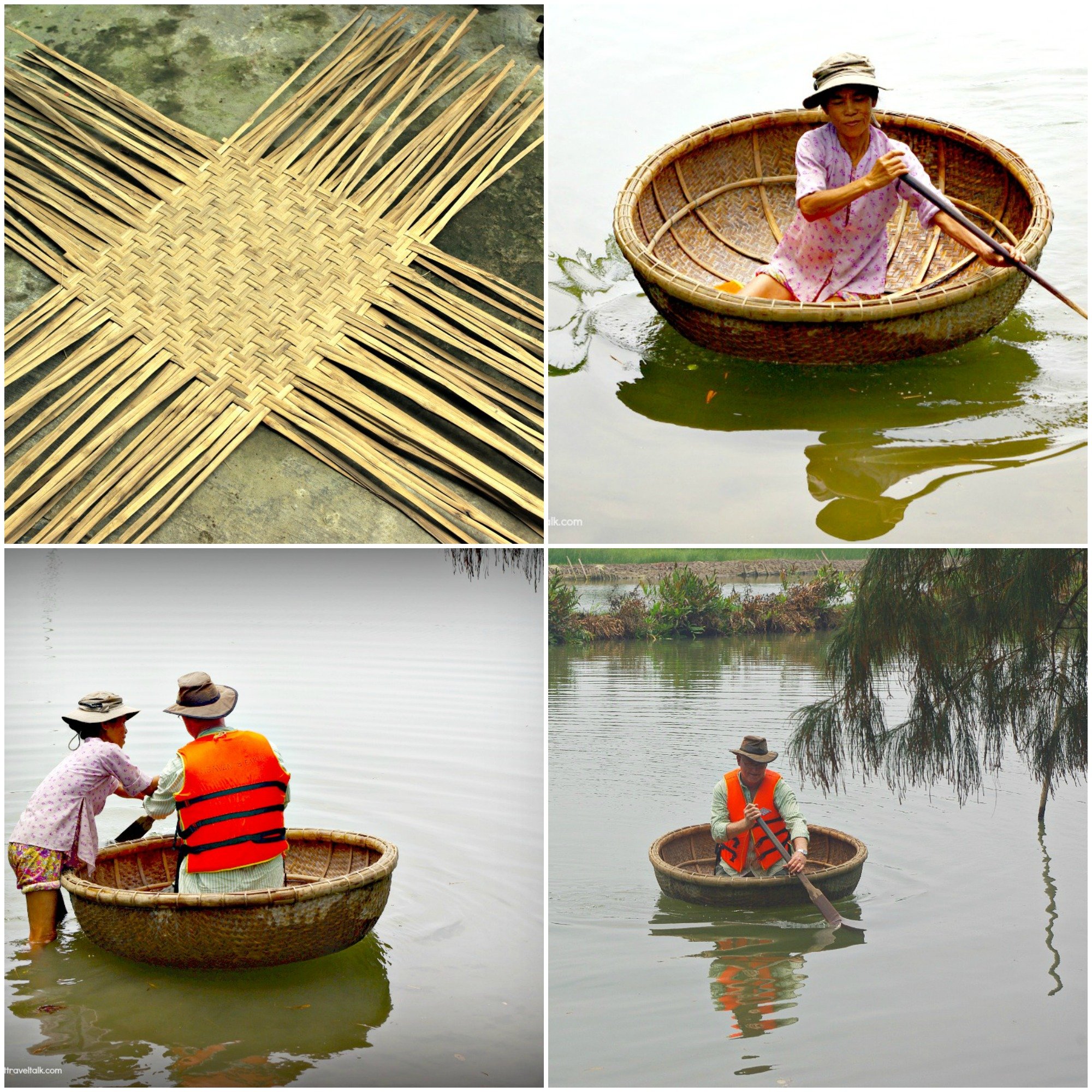 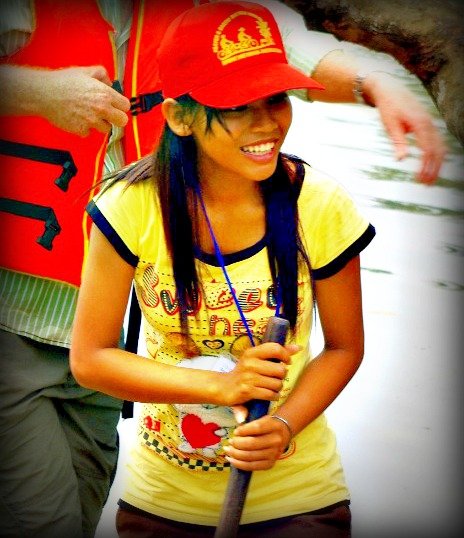 Hoi An was unharmed during the Vietnam/American War and it’s Unesco Heritage listing continues to protect the beautiful old buildings that housed and traded silks, porcelain and spices from the Fifteenth until the end of the Eighteenth Century. 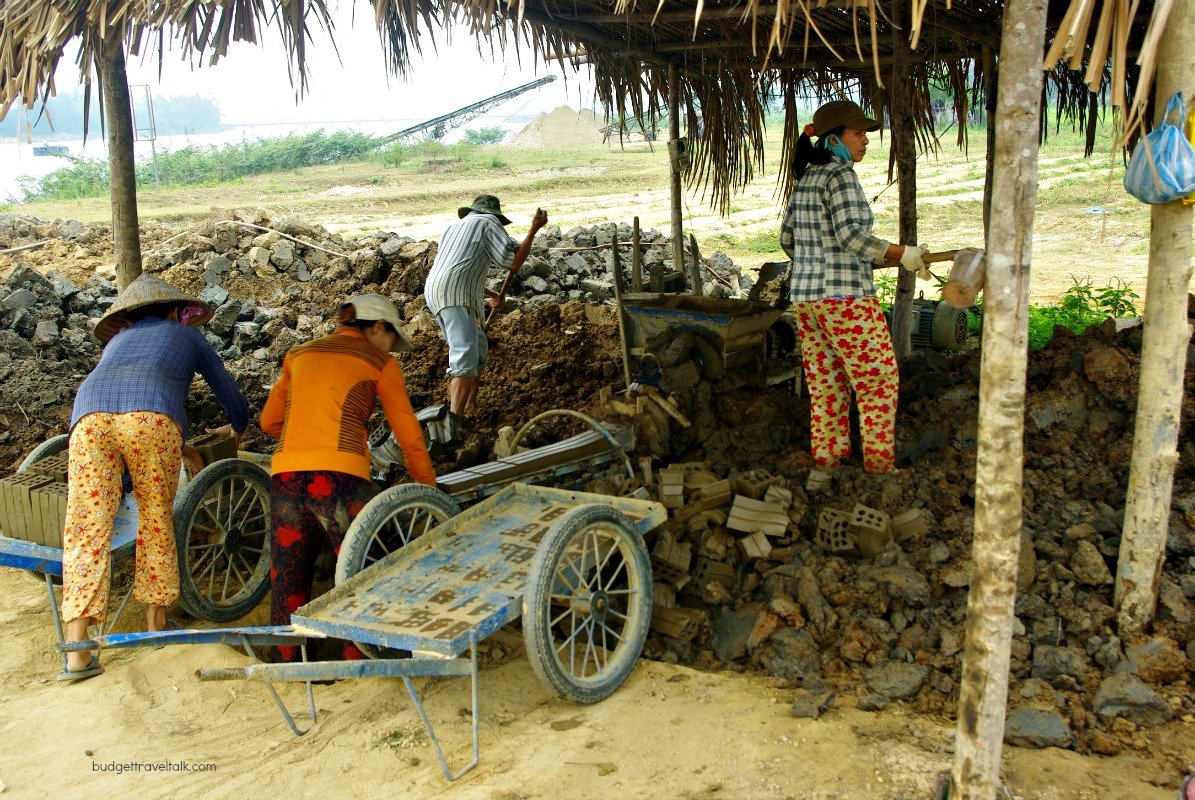 The excitement that I felt as we rode through the market place and hurriedly boarded the tiny ferry started to subside, but was soon reawakened by the foreign sounding throb of the exposed motor and the cool fresh river breeze on my face.  Obligingly the rain disappeared and didn’t bother us for the rest of the day.

A typical view on our ride through the countryside. 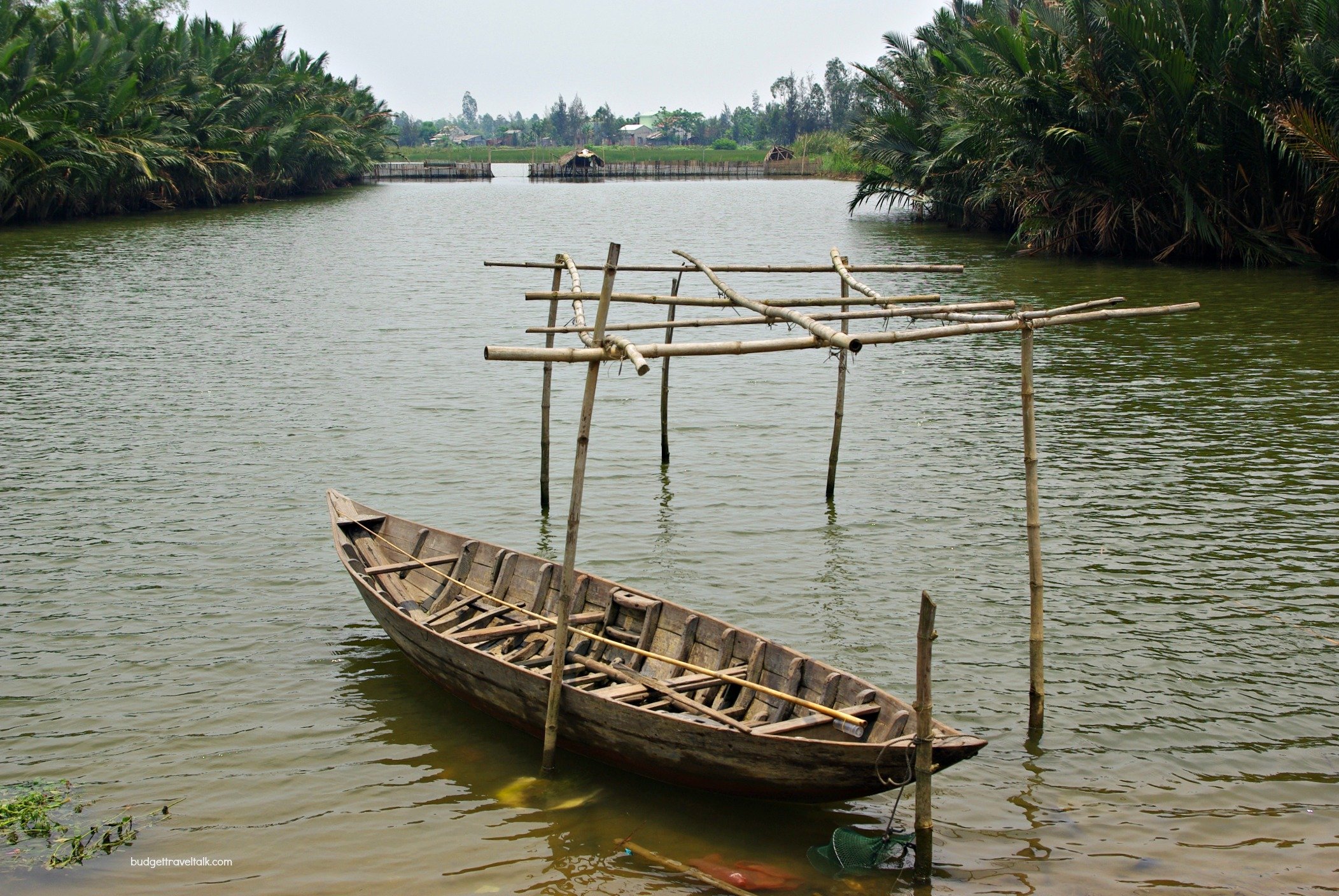 During the day we saw traditional timber boats being built, artisans creating mother of pearl inlay (intricate and time consuming work), an ice-works, round woven fishing boat making and paddling.  Lan purchased a bunch of freshly dug peanuts, from a lady working her vegetable plot.  Peeled and eaten straight from the ground, they tasted nothing like store bought peanuts, just like raw legumes – which I suppose they were.

When we stopped at a tiny local store for what I thought was lunch, I ordered a beer – only to discover it was actually a morning tea break.  Oops – It tasted just as good mid-morning, as it would at a more proper time of day. 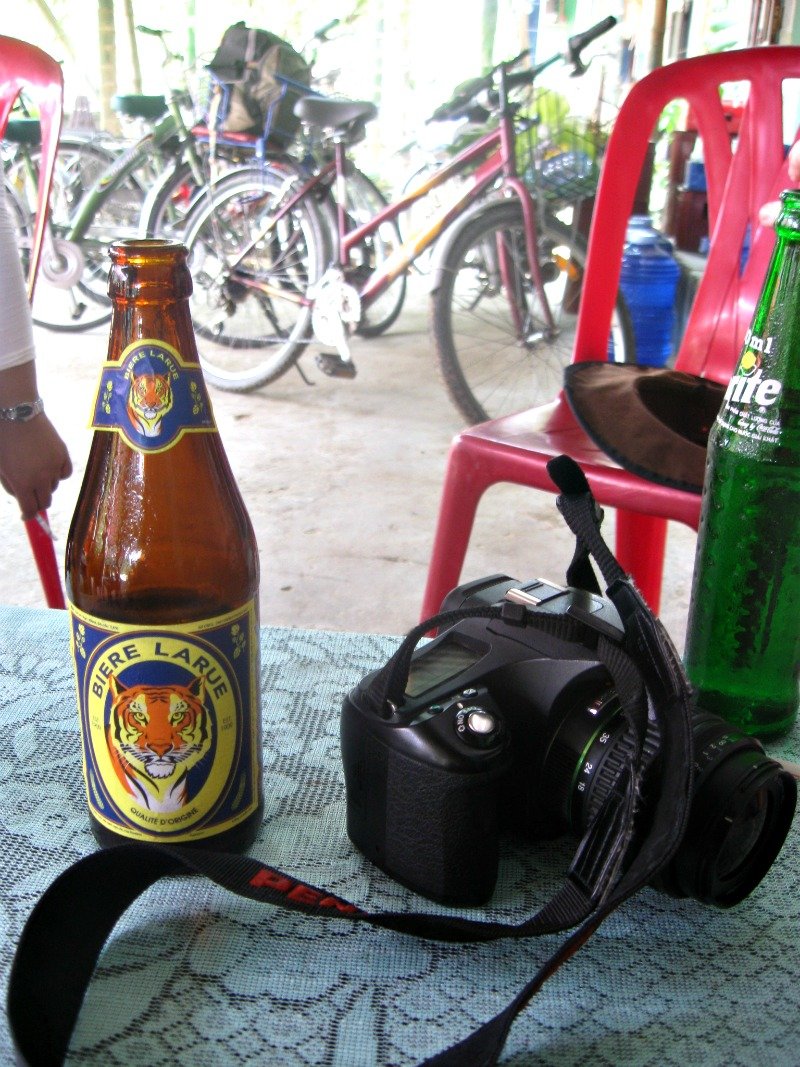 We rode mostly through rural areas, past palm trees, rice paddies and water, stopping to watch mud bricks being made.  I really enjoyed visiting the traditional Vietnamese home belonging to the Tour group’s family. Lan explained the shrine inside the home (every Vietnamese home has one) and answered questions about family life, after which we participated in a hands-on straw mat weaving demonstration.  In the front garden of the home, shaded by thatch and trees, lunch was served at small bamboo tables.  My chicken fillet with sweet sticky sauce, rice and morning glory (green vegetable) was delicious.  I did not hear one complaint.

We rode across this bridge, but you could walk your bike if you preferred. 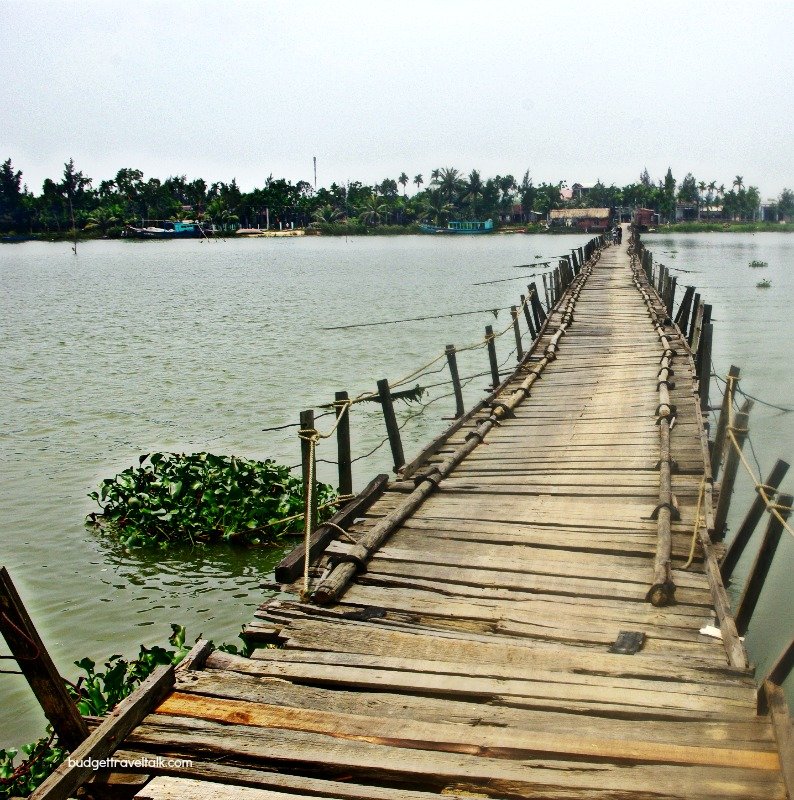 After Lunch everyone sat around talking or relaxing in the hammocks.  Some of the men of the household had an after lunch rest in the hammocks as well.  Phuong who had formed an easy friendship with the young American girls was happily braiding hair.

Lunch Beneath the trees. 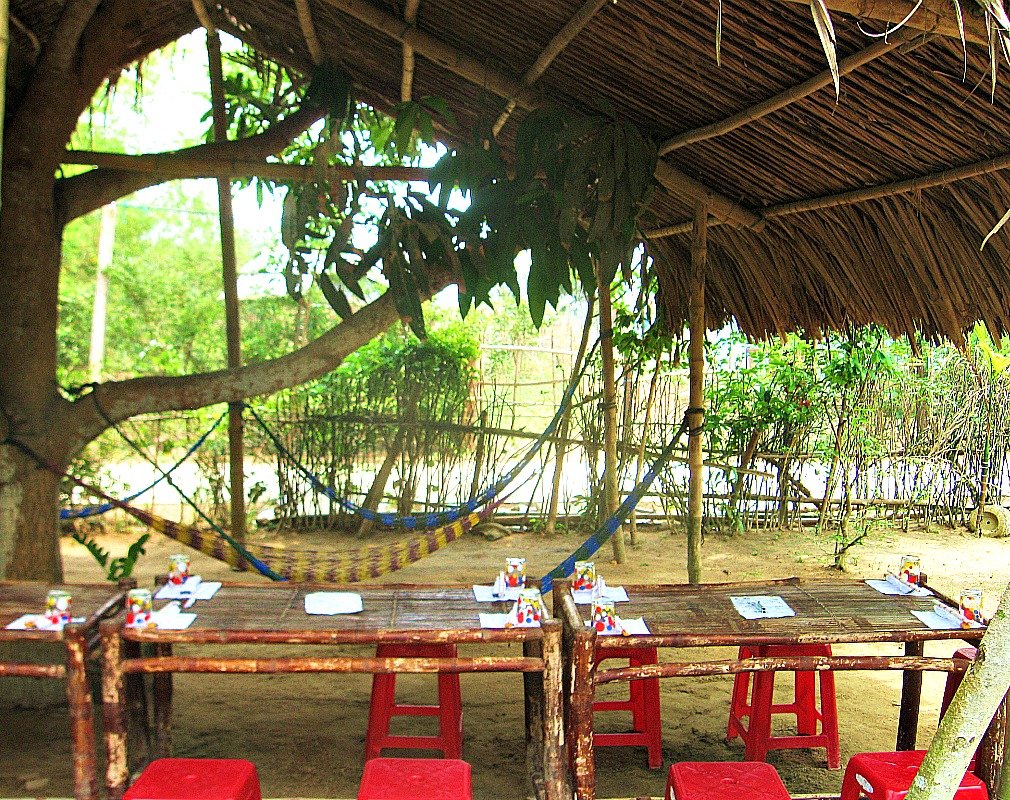 Leaving our bicycles behind at the house, I felt a slight moon walking sensation as Lan and Phuong led us to  the ferry boat stop.  This time we all had a chair to rest on as we glided by the fishing nets poised like giant insects waiting to pounce.  Back at the office we took the opportunity of tracing our route on the office map – if we had arrived on time that morning we would have done that before the tour started.  Damn!  As it was we had no idea where we were going.

But then that was half the fun.

We passed lots of these fishing nets on the way home.

Tour 2 is the same tour minus the lunch at the Vietnamese home – 17 USD Adult.  I would recommend Tour 1 because I would not like to miss the home and lunch experience.

The Tra Que Herb Village Tour would be perfect for those short on time or cash.  It is only 6 USD and takes two hours.

Drinks are not included in the tour price.

Hoi An is reached via Danang, where there is an airport and train station.  We arrived by overnight train from Ninh Binh in the North and left by Vietnam Airlines to Nha Trang in the south, using a taxi (30 minutes) for both transfers.