But Queenstown has more to offer than pure adrenalin fuelled activities. Movie Location tours are popular – three of the many movies made nearby are The Hobbit: An Unexpected Journey, The Lord of the Rings trilogy, The Lion, the Witch and the Wardrobe.

While Marlborough is known for its Sauvignon Blanc, Queenstown and the nearby Gibbston Valley, tallying 75 vineyards, are known for their Pinot Noir. Some vineyards have restaurants attached and tours are available.

Directly behind the town is the steepest chairlift in the southern hemisphere. Catch the Gondola from Breacon Street and then from the top, a chairlift leads to the beginning of the luge runs which terminate at the top Gondola.

Queenstown rained on us but we had a fun time running between shops, internet cafes and bars, fitting a lakeside walk in between the squalls.

Queenstown on the shore of Lake Wakatipu. 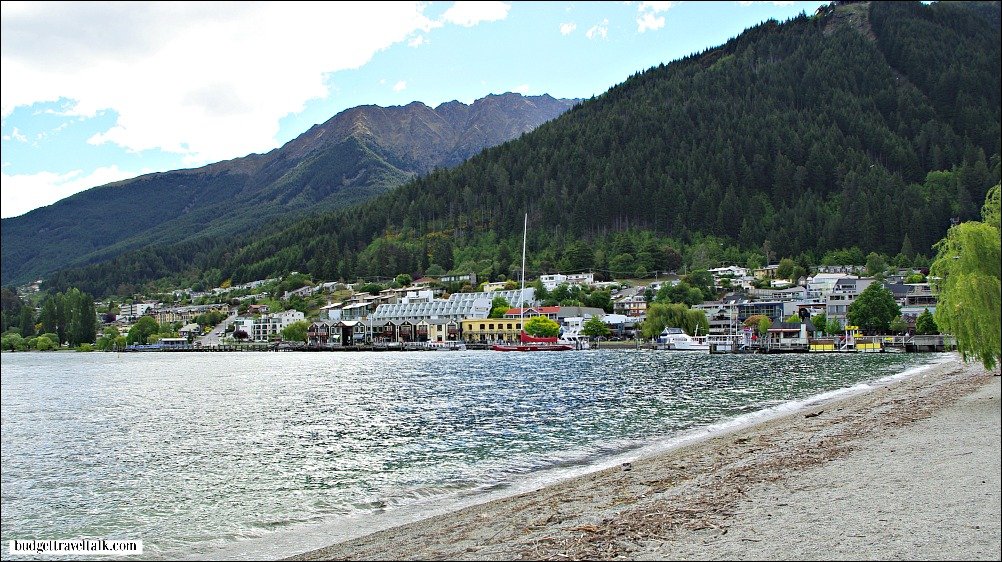 This hiking track (think soaring mountain peaks and moss draped forests) can be accessed from Glenorchy north of Queenstown. Most people walk this 32 km (3 day) sub-alpine track through the Fiordland and Mt. Aspiring National Parks, from the Routeburn Shelter, 25 km north of Glenorchy and finish at The Divide on the Milford Sound road.  Lonely Planet names it in the Ten Best Treks in the World, because of it’s high quality huts, well-maintained track and limited numbers. It’s popularity necessitates booking months in advance.

A Milford Sound experience is totally dependent upon the weather. After rain, multiple waterfalls gush spectacularly down the steep rock walls, but it is best if it is not actually raining during the trip. A good idea is to position yourself in nearby Te-Anau, watch the unfolding weather patterns, then make a run for it when the weather is favourable.

With rain expected the next day we drove like crazy to board the last boat trip at 3.30 p.m. With more time the best option would have been to visit immediately after the rain. If you need to fill in time in Te-Anau the western side of the lake has glow-worm caves.

On our Milford Sound trip there were waterfalls, but not multiple cascades. The weather remained clear but the water was choppy in places from the strong winds. Overall it was a beautiful trip with seal sightings and the boat idling beneath a tall waterfall with spray and wind lashing us. Quite exciting! Of course you could hide from the action inside the cabin.

With Milford Sound under our belts, we’ll visit the even more pristine wilderness of Doubtful Sound next time around. 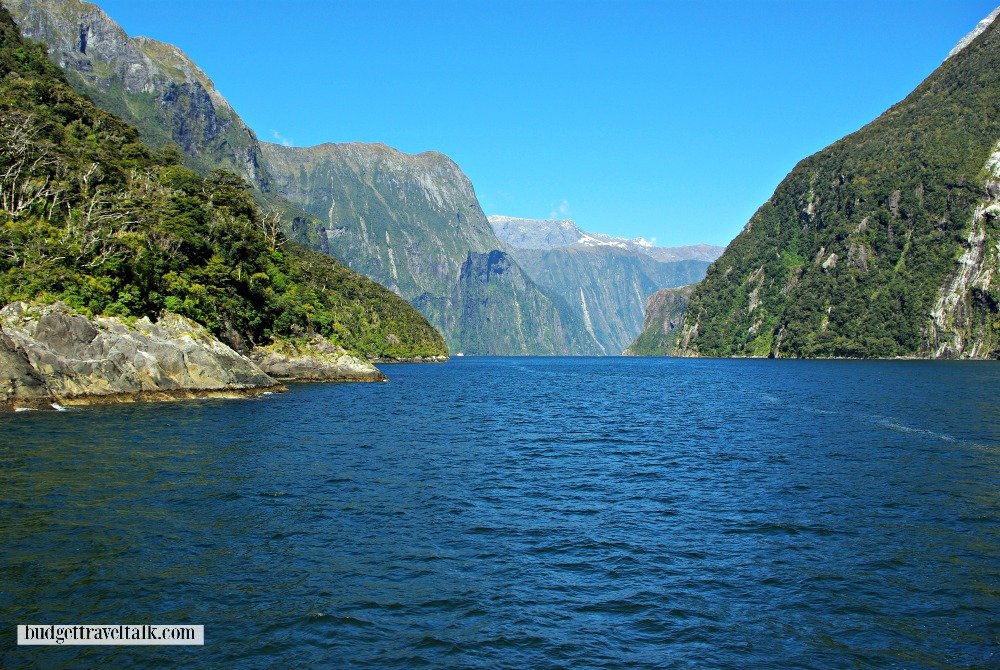 The road finishes at Milford Sound, so back track to Te-Anau and then take Highway 95 and then 99 to Clifden, Te-Aae-Wae, Invercargill and the Bluff, The Caitlins and Purakaunui.

This point on the northern end of the Caitlin Coast is home to a breeding colony of Fur Seals. Large rocks, aka nuggets, litter the water line with seals climbing their precarious inclines before somehow wedging themselves there (bring binoculars). It is a dramatic coastline even when the ocean is glassed out and mingling with blue sky on the horizon. 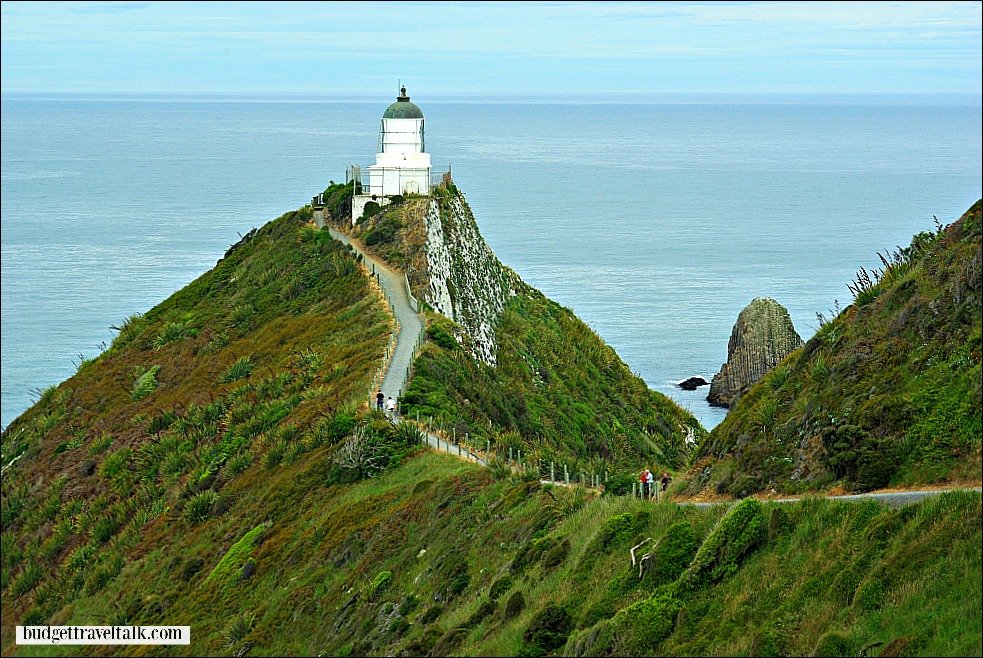 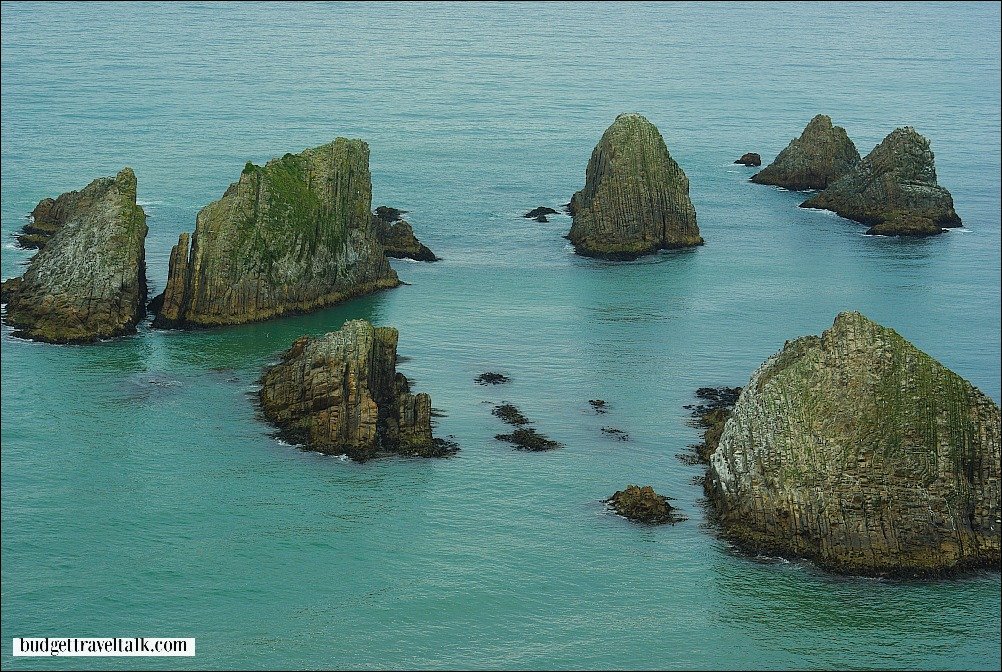 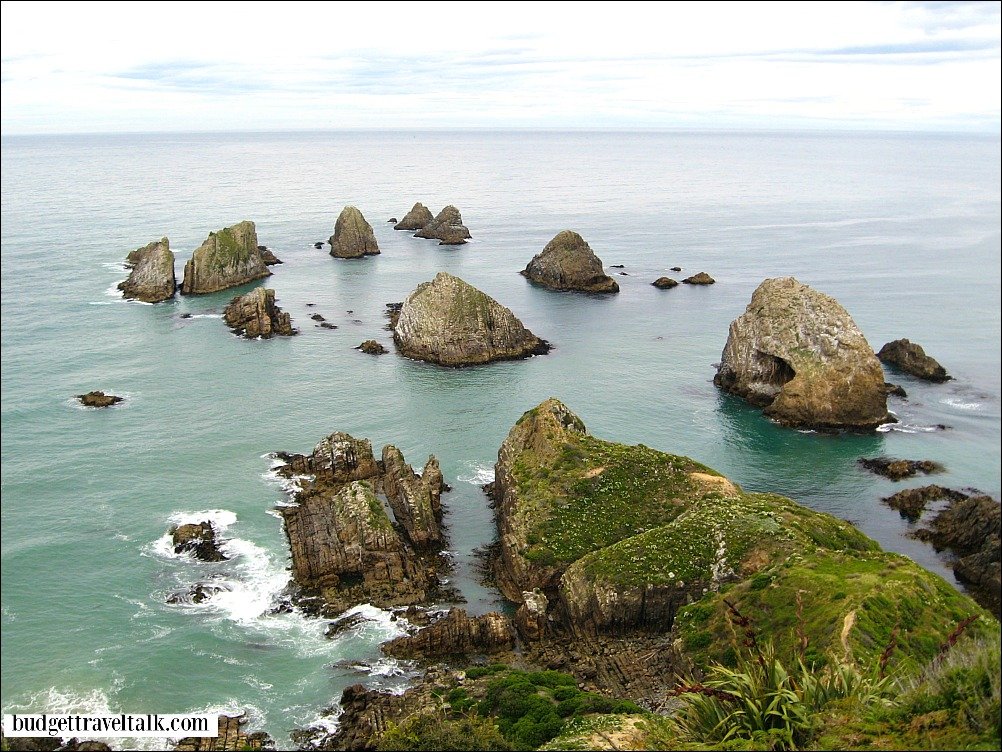 Dunedin and the Otago Peninsula.

Larnach Castle.  This romantic castle on the Otago Peninsula was built by a Scottish Australian in the mid 1800’s. He spared no expense using Italian Marble, Welsh Slate and glass from Venice and France. We particularly enjoyed the romantic gardens with great ocean views. There is a large cafe on site.

Dunedin’s Baldwin Street. Huff and puff up the steepest street in the world.

Cadbury World. Chocoholics gather in the centre of Dunedin to partake in Cadbury Chocolate Tours.

Dunedin’s Railway Station has to be seen to be believed. It was constructed in a mix of dark basalt rock, light Oamaru Stone and Pink Granite. Add come copper domes to the striking exterior and then picture the internal mosaic floor of 750,000 tiles with a Royal Doulton frieze on the balcony above. Finished in 1904 it came in on a budget of only 40,000 pounds. Impressive. 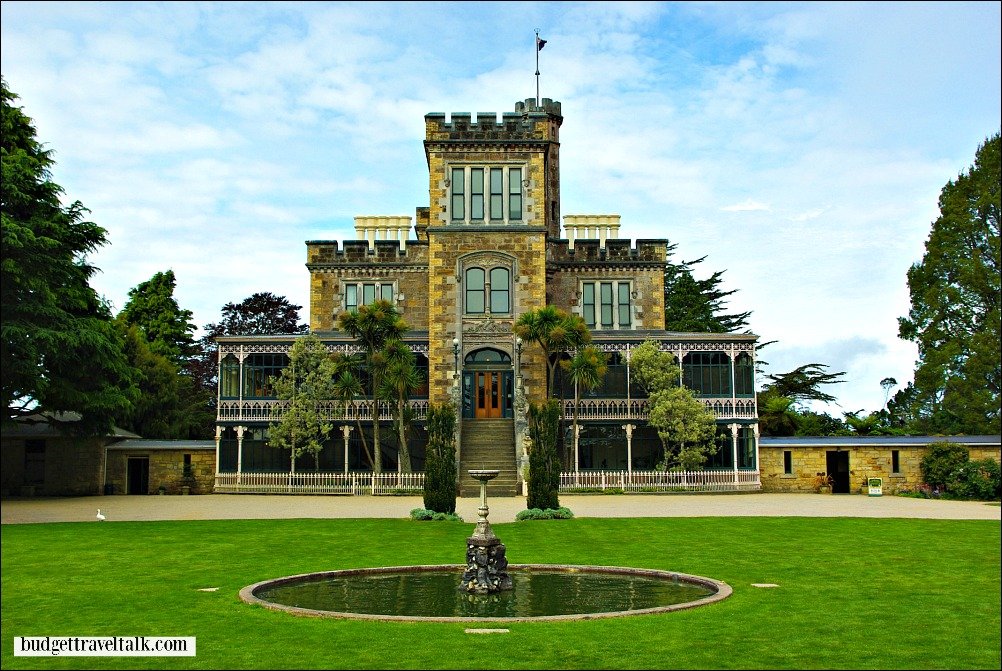 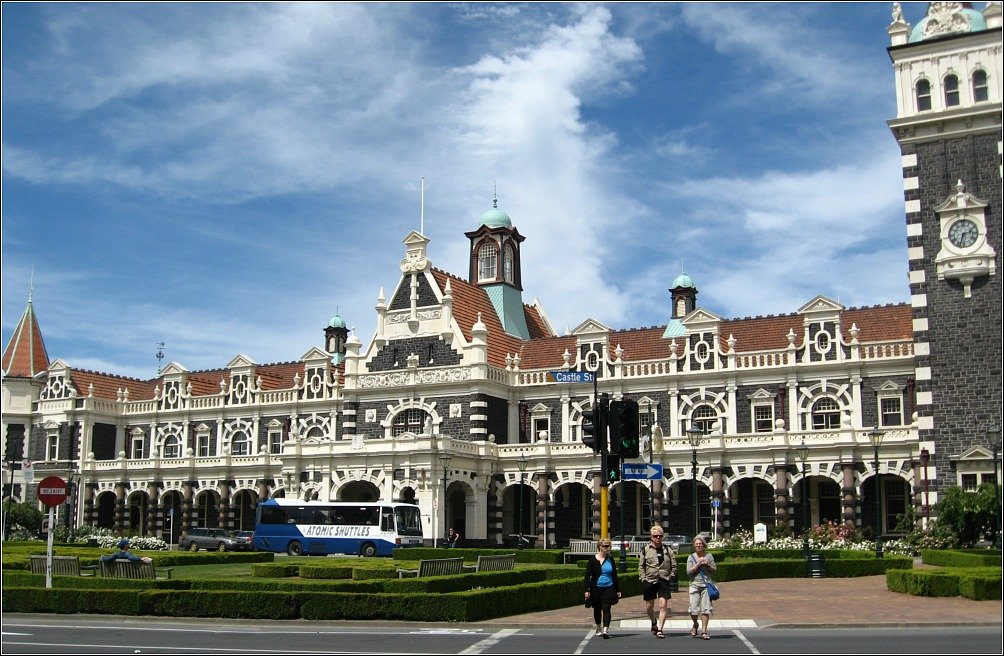 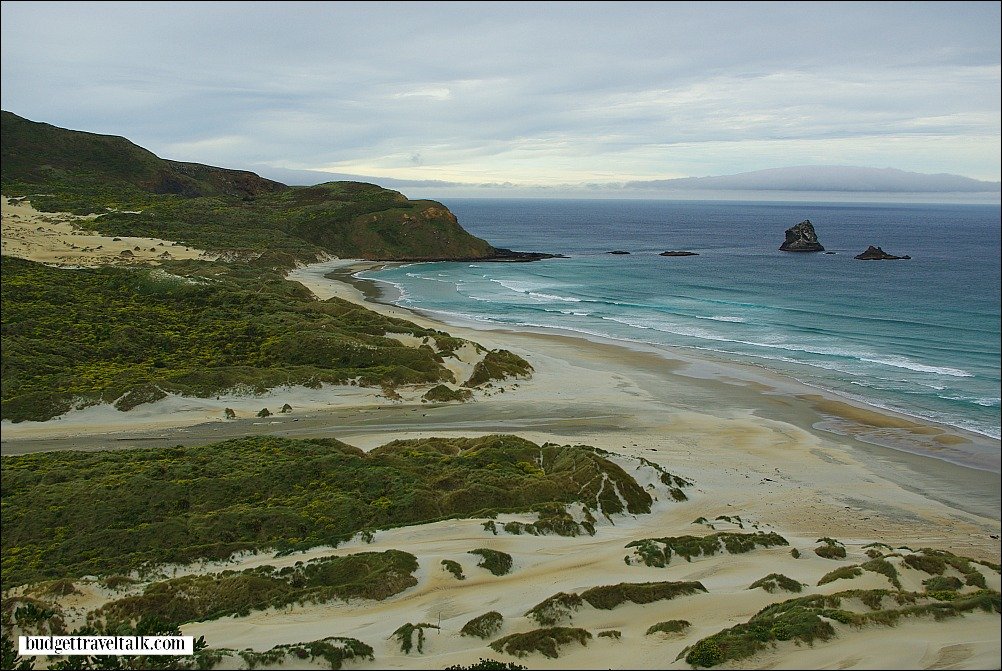 These fascinating mud filled boulders on the beach south of Oamaru look like left-overs from a giant game of marbles. 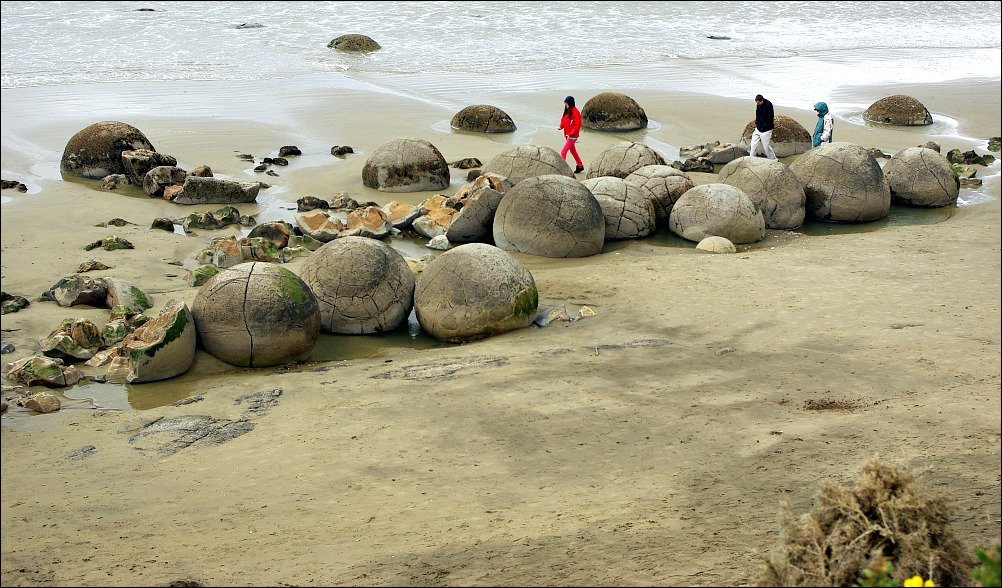 Oamaru has a lively Victorian precinct including Steampunk HQ. The precinct is a lively mix of antique galleries, cafes, restaurants, breweries and bars and Oamaru’s lovely public garden’s whimsical mix of statues and flowers that is a credit to this relatively small town. Oamaru Garden is great for all the family, with a kids playground and landscaped forest areas for a game of hide n’ seek. It’s hothouse and luscious gardens will delight garden lovers and the Red Japanese Bridge is a lovely surprise.

N.Z. is known for it’s dairy products and the cheese at Whitestone Cheese Shop is superb. Try a tasting platter before buying up big. You can learn about the cheese making process and watch it in action. The Whitestone white caravan sells produce at Oamaru market and as far afield as Queenstown and Dunedin markets. 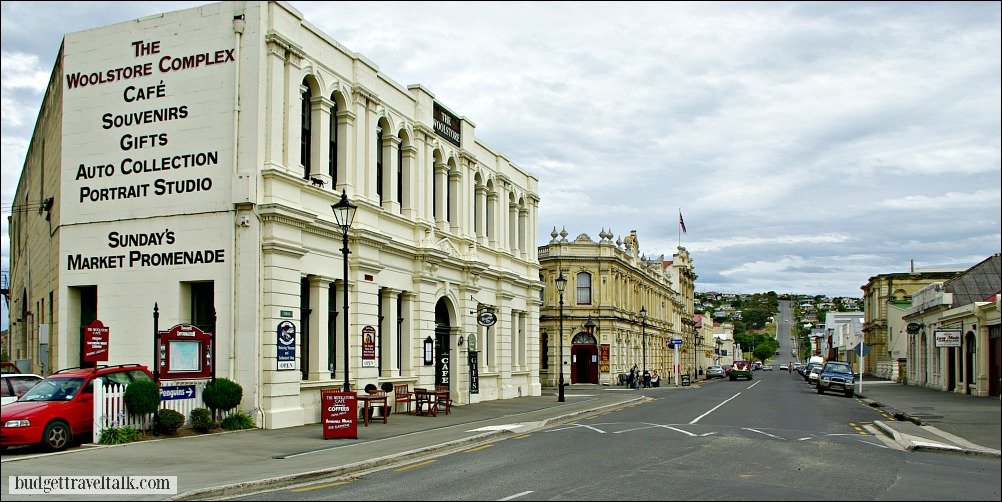 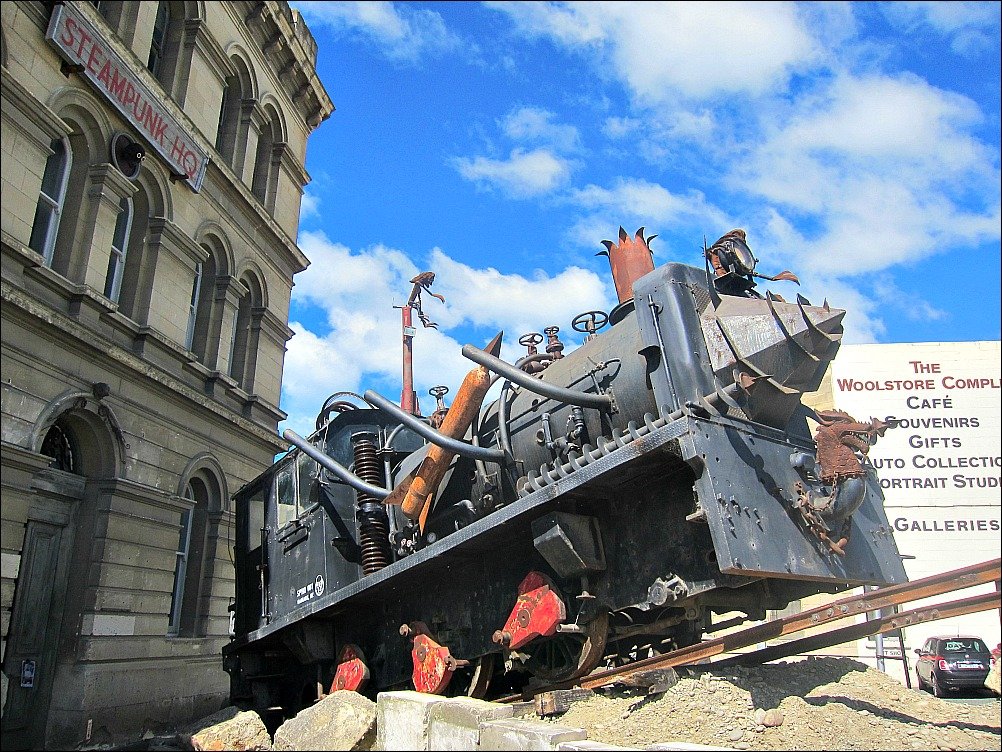 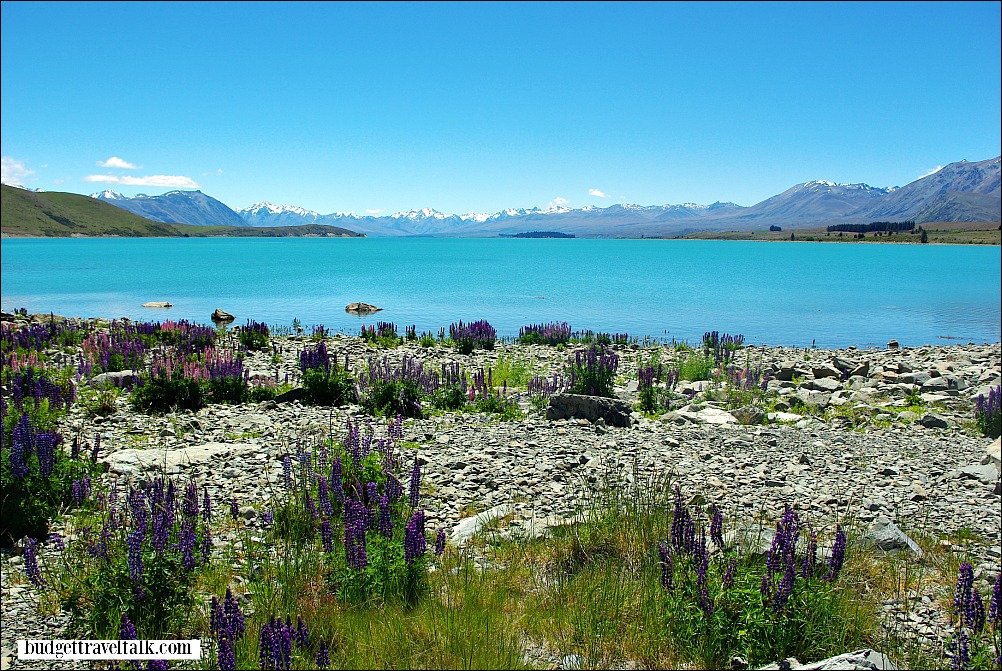 Lupins growing on the shores of Lake Tekapo. 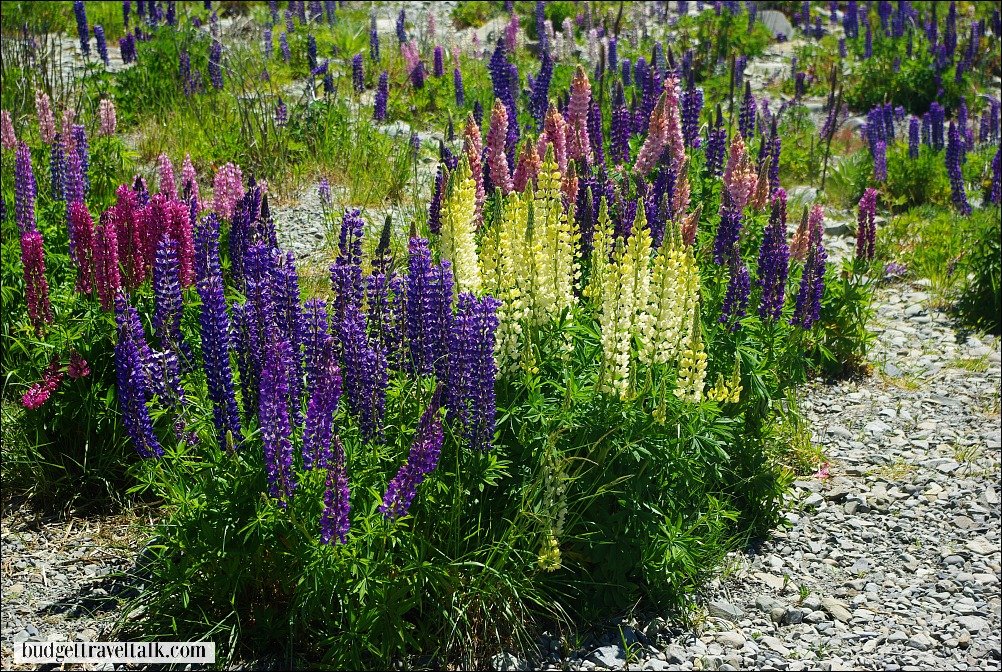 The road to Mt. Cook follows the western shores of Lake Pukaki another startlingly blue expanse of water. New Zealand’s highest mountain was 3764 metres until 1991 when a chunk fell. It now measures in at 3724 metres. 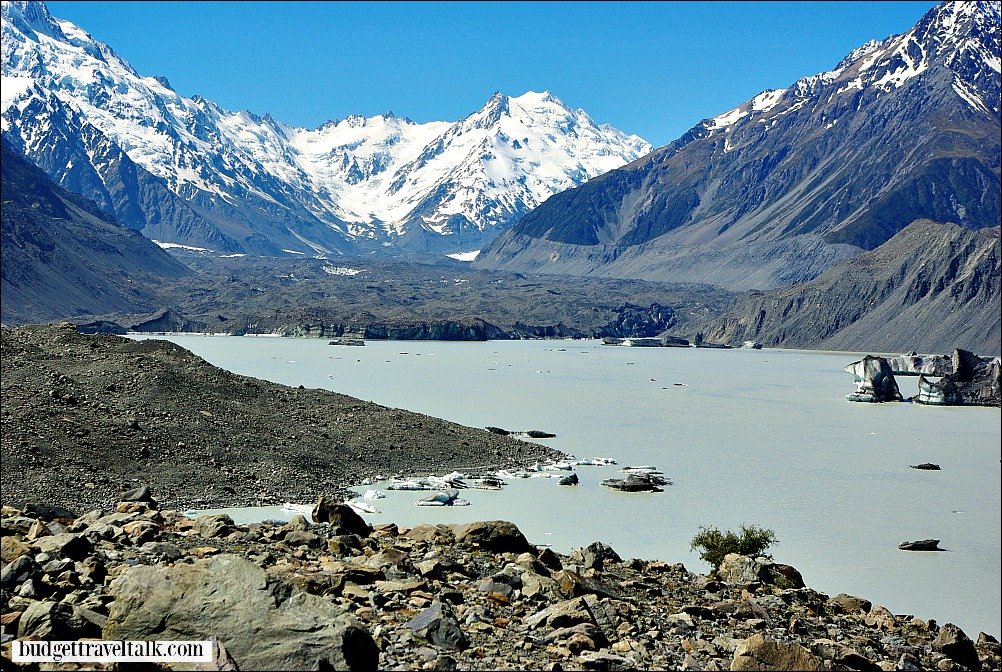 We finish where it all started.

Iconic Punting on the Avon River. 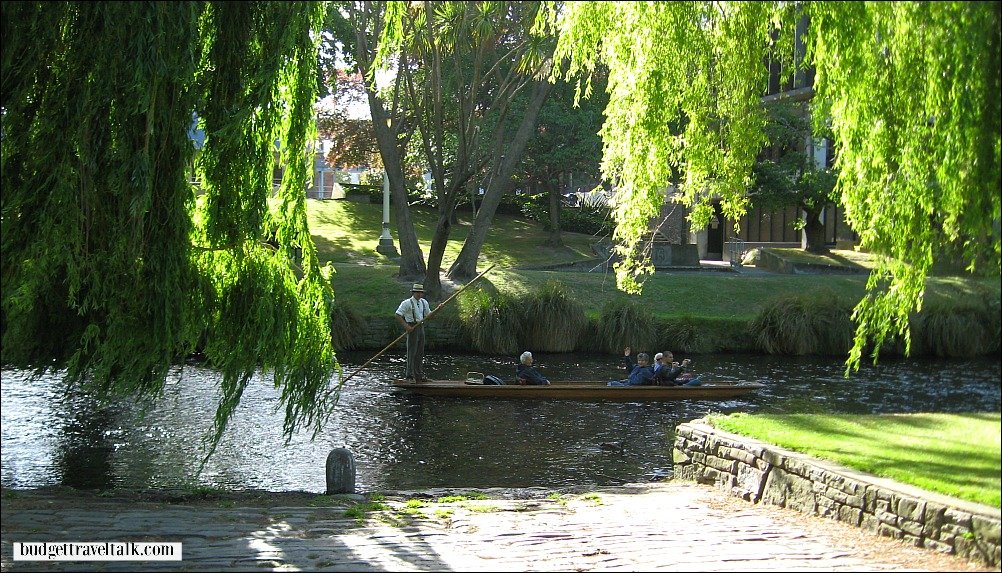 We recommend November, but the South Island is known for it’s unpredictable weather. Summer is December, January and February and I expect it would be a lot busier in those months. November suited us fine. We had a mix of weather but overall we were very comfortable.

Where to Stay on arrival in Christchurch.

Flights from Australia do land late at night, too late to pick up a van. Quite a few motels near the airport offer a free pick-up service and we chose Airport Lodge Motel whose service operates 7.15 a.m. to 2 a.m.

Bring a jacket as temperatures can fluctuate and some protection from the rain is a good idea too, especially if hiking. The Maori word for New Zealand is Aoetaroa, meaning land of the long white cloud (just saying).

We chose Jucy because they were budget priced and offered a free pick-up service. We loved our van, the service was good and the staff friendly. Be aware that in the morning it can take longer than expected to arrive, fill-in forms and inspect the vehicle. Allow an hour to get on the road.

An Aussie Sunday Drive Mullumbimby to Uki
Next Post: Dinner in a Japanese Home