Having heard of the existence of salt fields across river we decided to take a look.  Hiring beat-up bicycles for $1 USD/day we prepared ourselves for the challenge of the old bridge.  Destroyed by the Khmer Rouge it had been rebuilt but with mismatched components.  The result was undeniably charming albeit with underlying questions about structural integrity.   Once on the bridge I started pedaling like a crazy woman to scale the ramp that masked the change in level at the first join.  Piece of Cake.  The rest of the bridge passed in a blur of adrenalin tinged with the glow of accomplishment and relief.

Views like this would be our reward on the other side of the river. 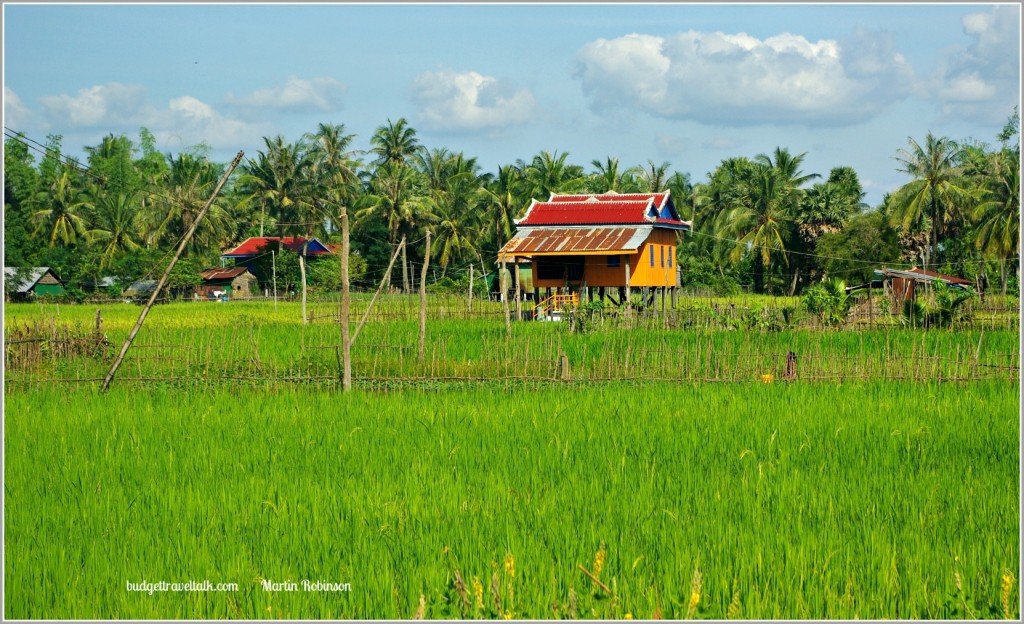 But first of all we had to thread our way through traffic, take the second left and cross another less eccentric bridge to Fish Isle.   In retrospect I guess the island was named for the several fishing villages it is home to.  We quickly left the main (pot-holed) road behind and headed onto the quieter side roads.  There we took our time, admiring the lush green country and homes made from corrugated iron sheets and thatch that squatted in the rice paddies.  Some of them shaded sleeping platforms beneath where whole families sat.  Occasionally young boys gathered courage to call out to our backs – but not in English.

We started out with the idea of riding as far as then climbing Nut Hill for it’s ocean views, but we soon realized we would not make it that far. 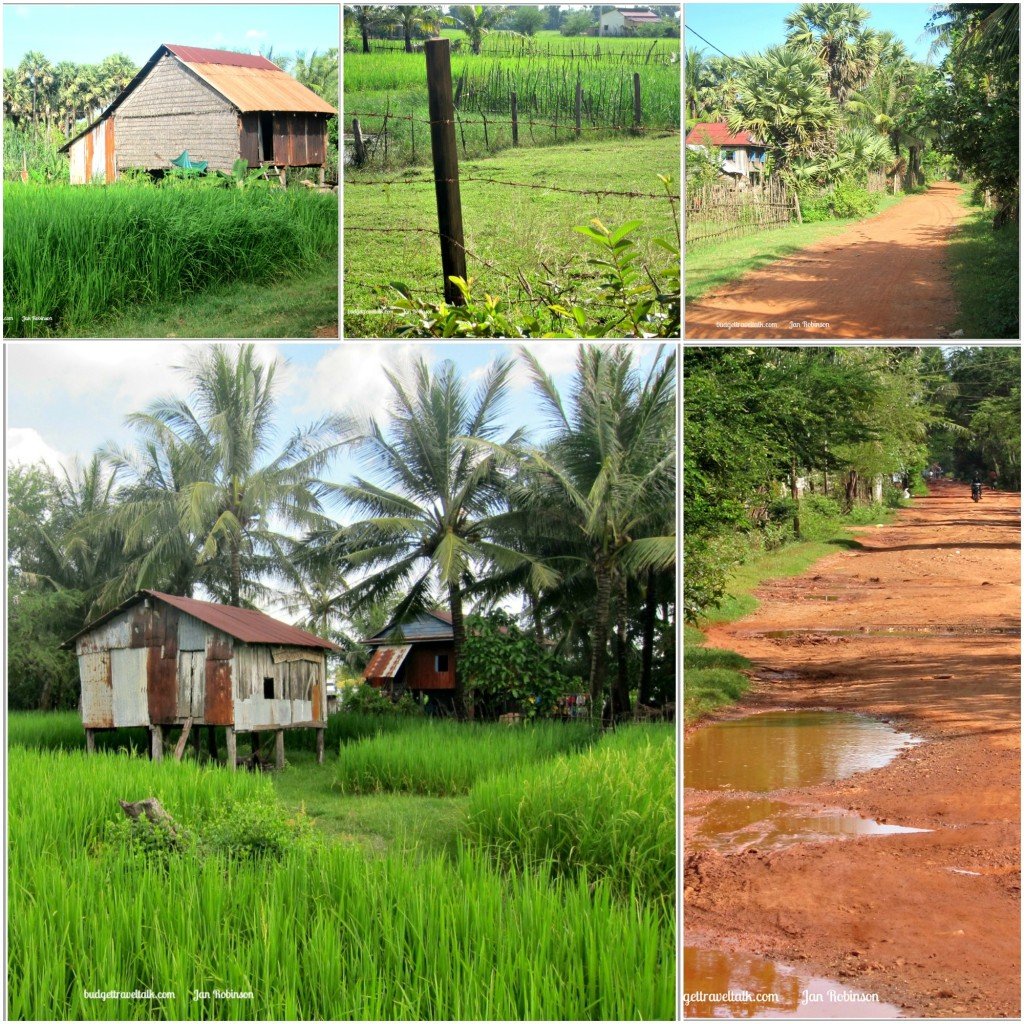 This seasoned timber home with it’s red tin roof and blue paneled boards overlooked a peaceful pond whose surface was covered in a fine floating plant that we call duck weed.  I think it worked.

I wondered if  it was full of fish but the surface was quite still. 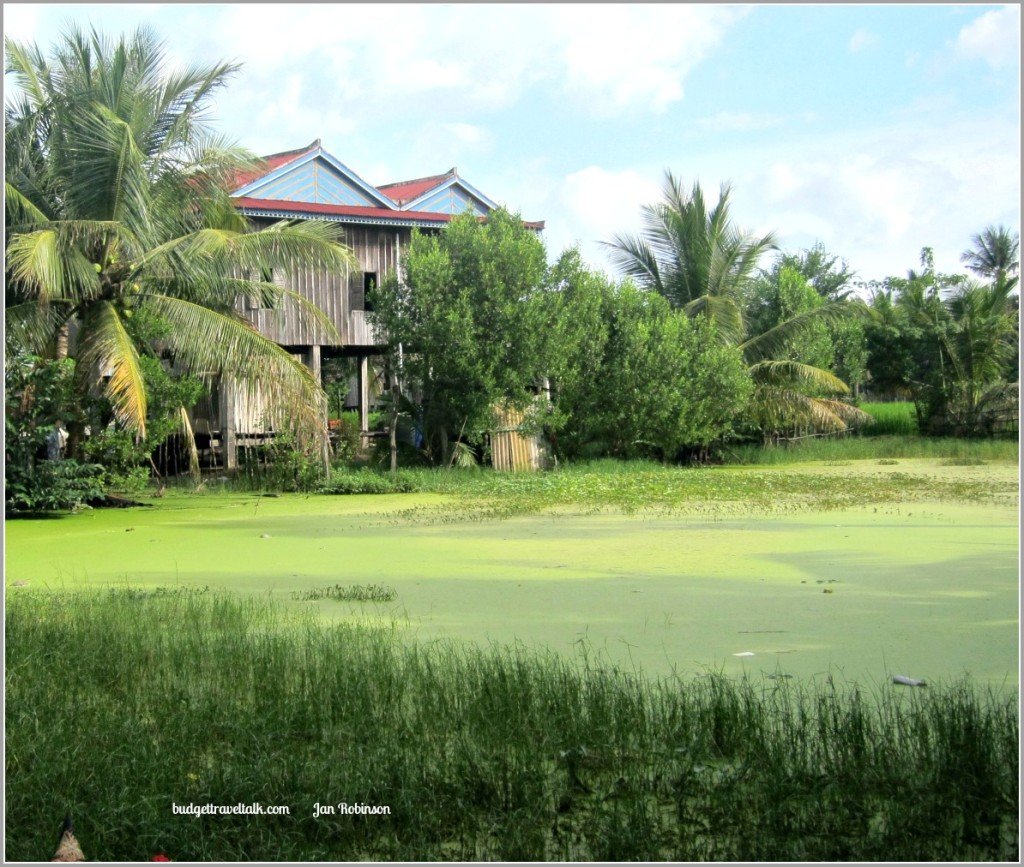 An unmade track culminated in this weird but wonderful scene of ducks/geese patrolling the front of a rather upmarket home.  I wonder if they ever got the courage to waddle upstairs?  This home was in stark contrast to the other homes we saw that day. 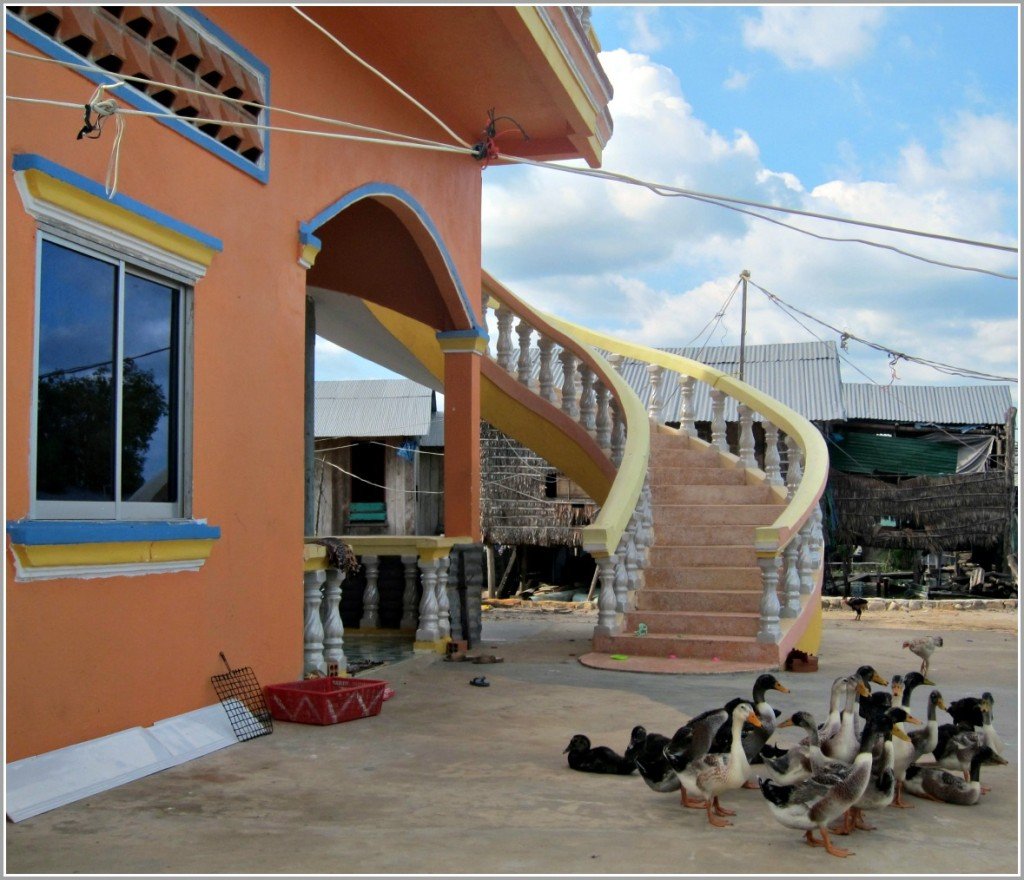 Only a couple of metres away from the house and it’s resident guard flock, fishing boats bobbled at their moorings.  In a different country a Gondolier might appear… 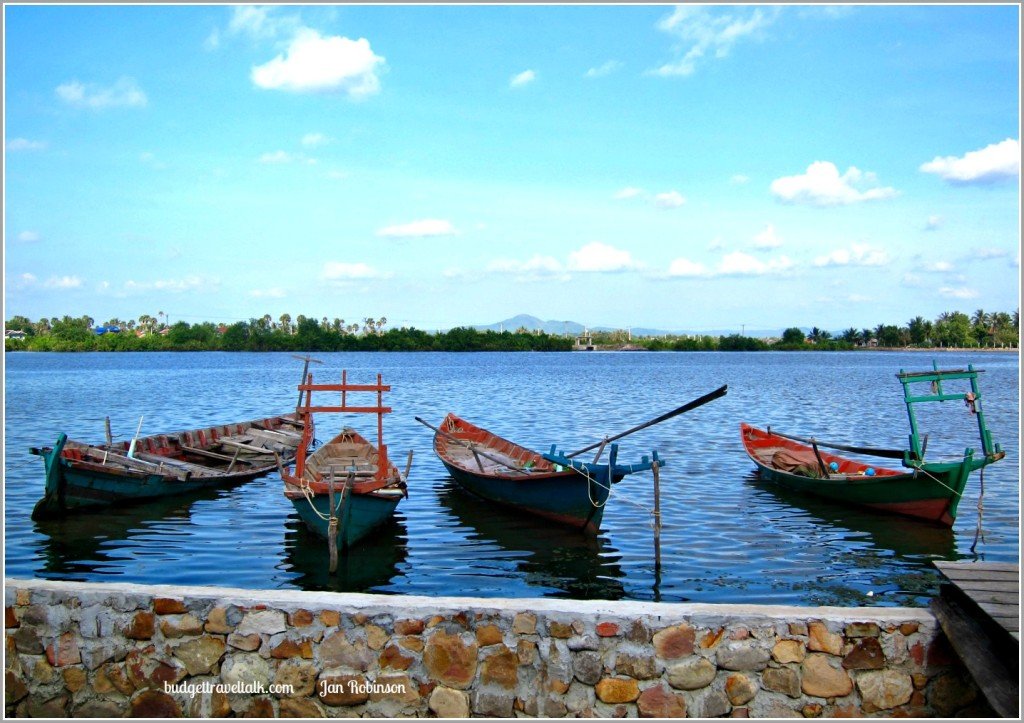 Marty, a born Leo, ventured down 60cm wide paths that doubled as built up borders between the rice paddies and being a Virgo I followed!  These already narrow paths were consumed by mud puddles in places that left just a few tyre widths of dry clay to negotiate.  I tried focusing on the gap, but my Taos (best ever walking sandals) and I landed in the mud after I lost my nerve and jumped off.  Subsequently I tried looking only at the muddy puddles but failed again, then finally looking only straight ahead avoiding eye contact with both gap and the puddles.  Time to face it – my bike and I were fatally attracted to mud.

To his credit my partner in life repeatedly stopped and waited for me – making sympathetic noises – with a possible glint of amusement in his eyes.  When I told him grumpily that I thought we should turn back he convinced me we were nearly there – where?  Ever optomistic I washed my Taos in a paddy field and hopped back on. 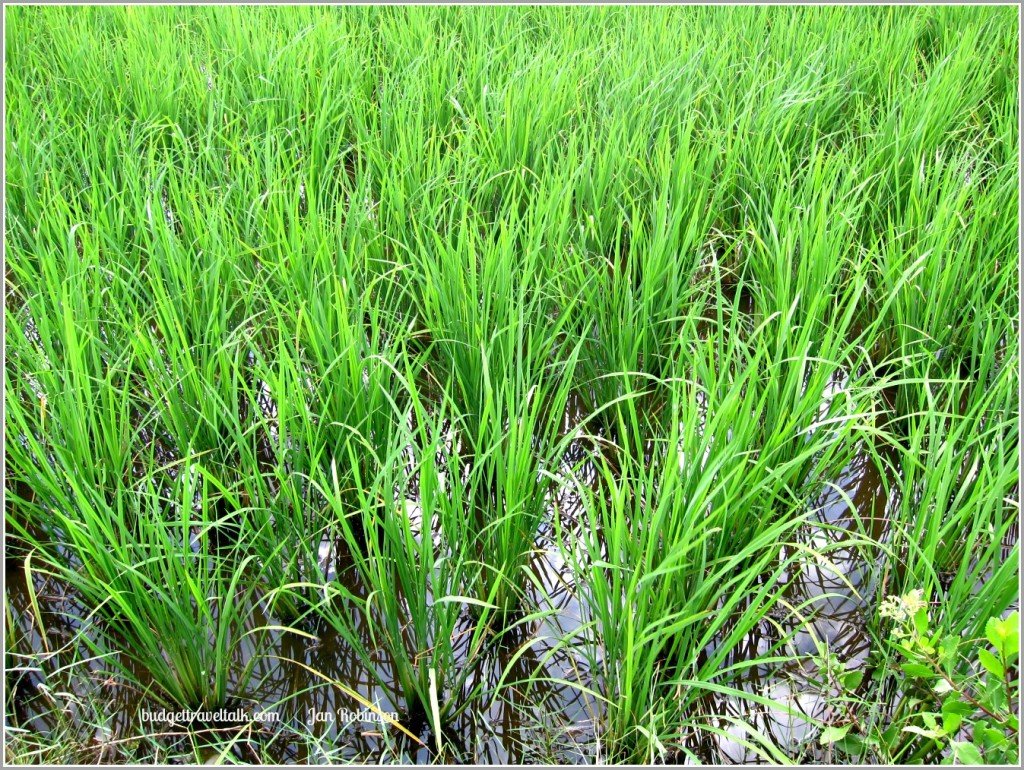 Occasionally we came upon tiny boys in charge of weighty water buffalo.  I don’t think this little guy could possibly have stopped the buffalo if it decided to charge. 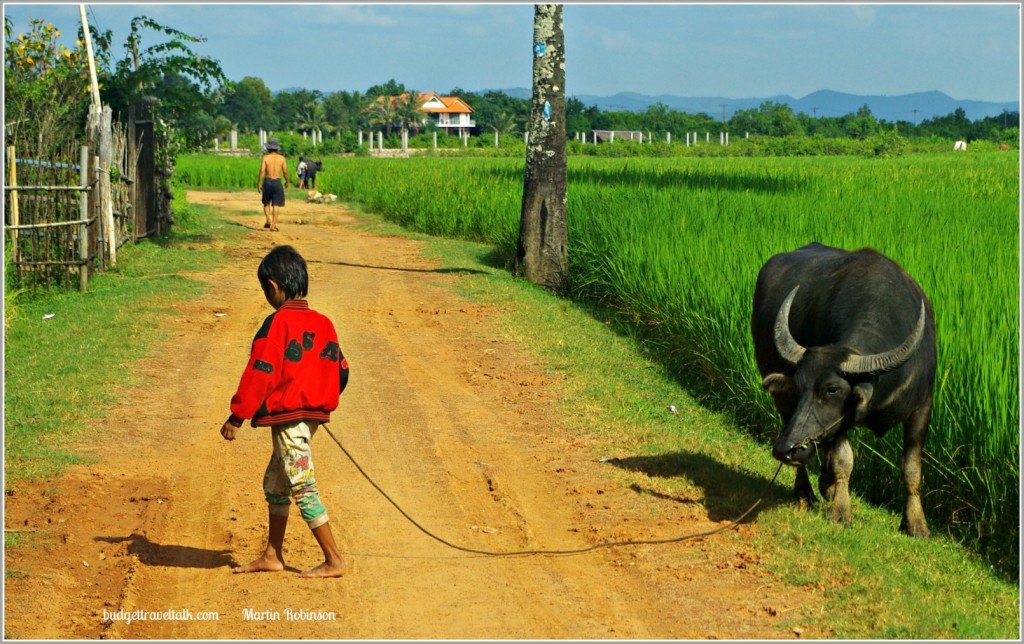 Our route through the paddy fields had led us the back way to a small Muslim Fishing Village on the riverbank.  Prayers had just finished and white clad men and boys poured from the mosque in a paddy field bordering their village.  Everyone seemed perplexed by our sudden appearance and watched our progress warily, while I tried diligently not to run over any livestock.  There was only the one track through the village and we followed it past the mosque where it joined a larger yet still dirt road.

Another well chosen turn and miraculously we had arrived at some salt fields.  (Insert air punching and high fiving) 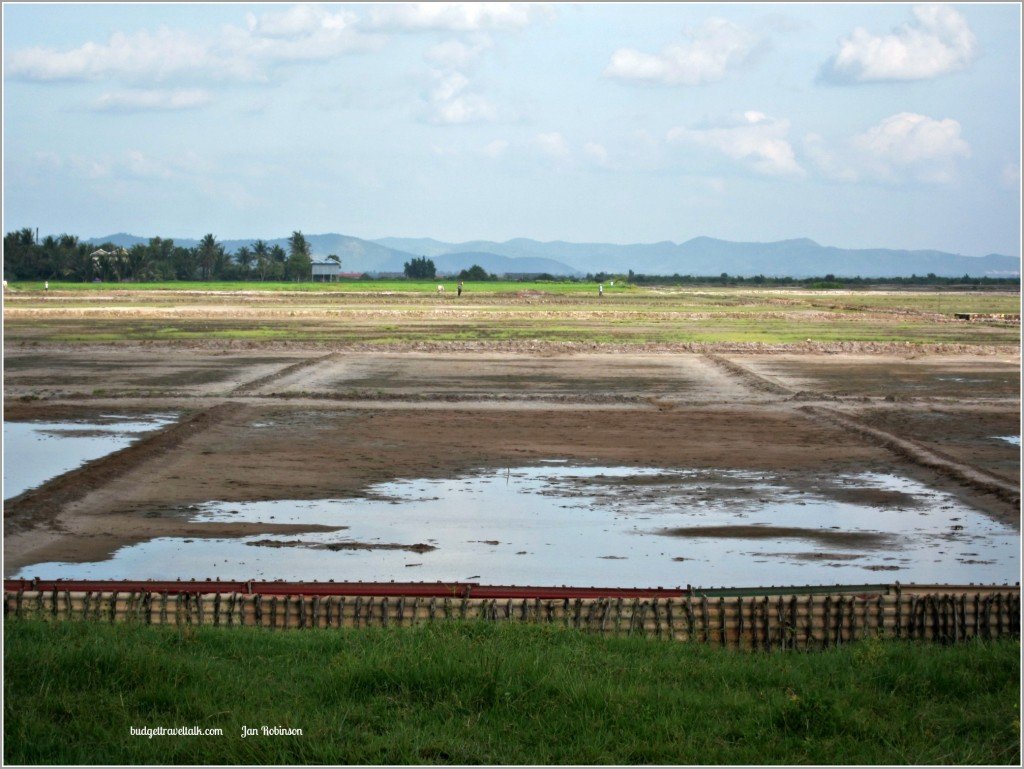 Now that the rains and floods had receded the fields were being prepared.  Soon water would be let in then stopped, while the dammed water was left to evaporate into salt crystals.

While the fields were not impressive in their current state I could imagine women brooming the shining crystals into Mt. Fuji-like piles.  Evaporation would not take long in Kampot’s climate.

Although we had set out looking for salt fields this was a definite case of  it’s the journey not the destination that counts.  Bicycles have a way of revealing new things to me – both in my surroundings and in myself.  Are you a fan of exploring by bicycle? 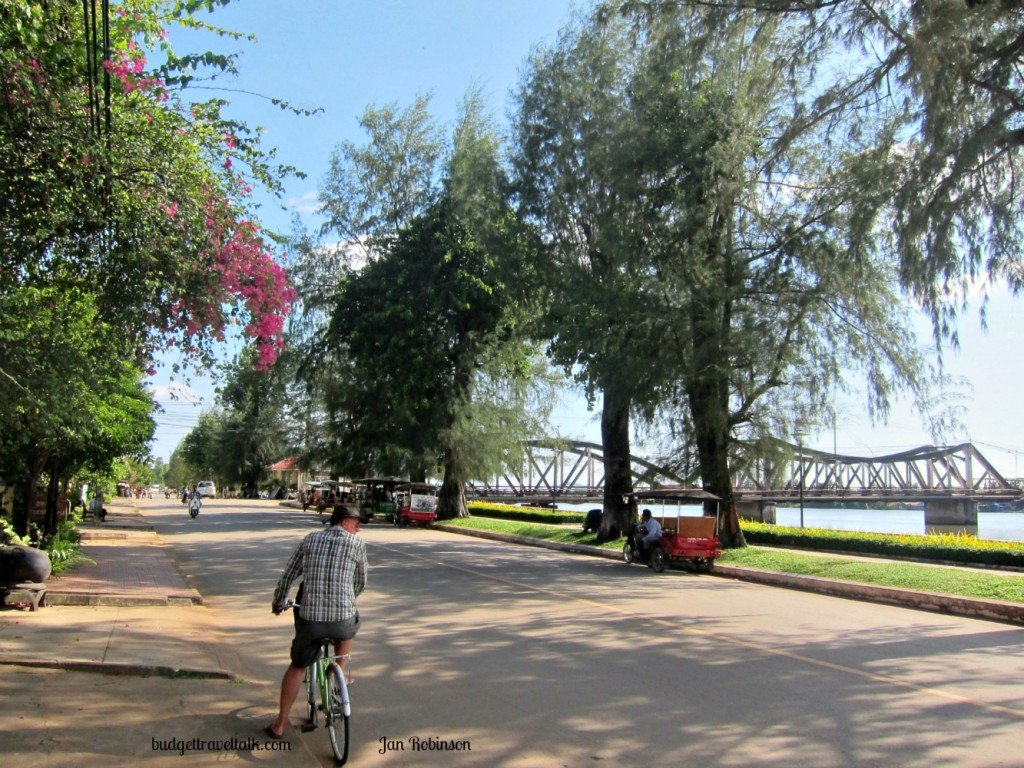 This post is linked to Nancie’s TRAVEL PHOTO THURSDAY AT BUDGET TRAVELERS SANDBOX.  If you are new to Budget Travel Talk you can see our Cambodian Itinerary HERE.

Tuesday in Townsville at the Perc Tucker Gallery
Next Post: Fantastic Friday in Galipdede Caddesi Istanbul