They say it is not possible to love both Florence and Siena!  From our farmhouse in the south of Tuscany, Siena was the closest and most obvious day trip so we were about to put that theory to the test.

In 1554 The Duchy of Florence defeated the Republic of Siena after which Siena was left to wallow in obscurity.  Because of this and luckily for us today, the gothic structures were not torn down and replaced with Renaissance ones as happened in Florence.

Thirty years ago we visited Florence, and succumbed to her iconic fountain, bridges, and her most wonderful statue of David, but now it was Siena’s turn to impress.

We dragged ourselves away from BREAKFAST ON THE TERRACE and jumped into our cute blue fiat for a no stops drive to Siena.  The plan was for us to arrive before the crowds and then go exploring on our way home to Castel del Piano.

This is one of my favourite Sienese photos and I think it describes Italy and Italians to perfection. 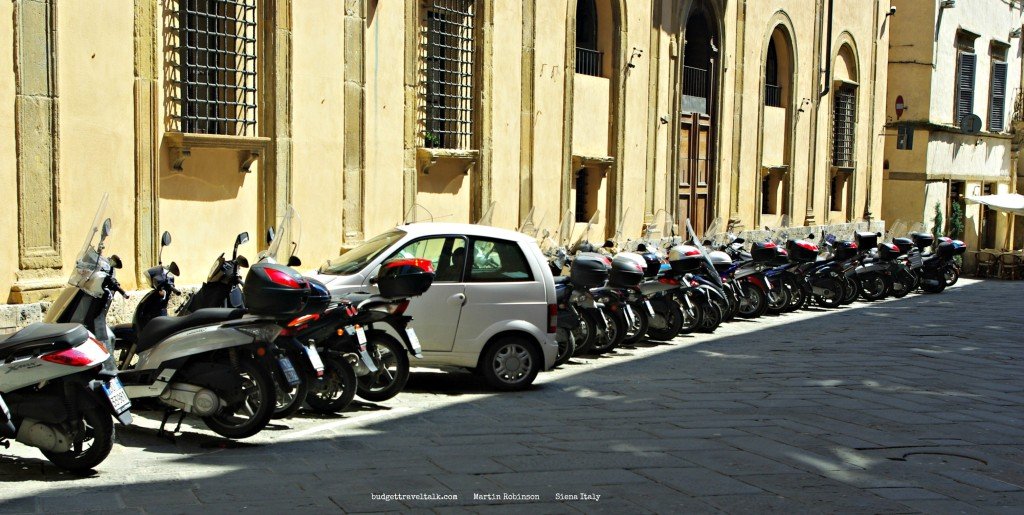 The Gothic Cathedral or Duomo.  The first gothic cathedral that wowed us was the Milano Duomo, but while Siena’s did not match that one in either size or design, it was definitely magnifico.  It is situated in Piazza del Duomo, a short distance from the Piazza del Campo and I would not miss seeing it.

Building commenced in 1196 and was still pottering along in the 13th century.  Between the 14th and 16th Centuries 40 artists completed 56 decorative floor panels in marble and these are considered the Duomo’s treasure.  Unfortunately there are only a few on display apart from Il Palio time and two other random consecutive months.  The panels on display are roped off but easily viewed.  The others which also happen to be the best, are covered for preservation beneath the pews where mass is conducted.

They discovered a room below the pulpit in 1999 and after cleaning out the debris of the 1300’s it opened to the public in 2003.  It is lined with 180 square metres of murals from the 1200’s (painted on a dry surface) as opposed to the more durable frescoes (painted on wet plaster).  Not a bad thing to find in the basement.  It is accessed from north of the Duomo and has a separate entrance charge. 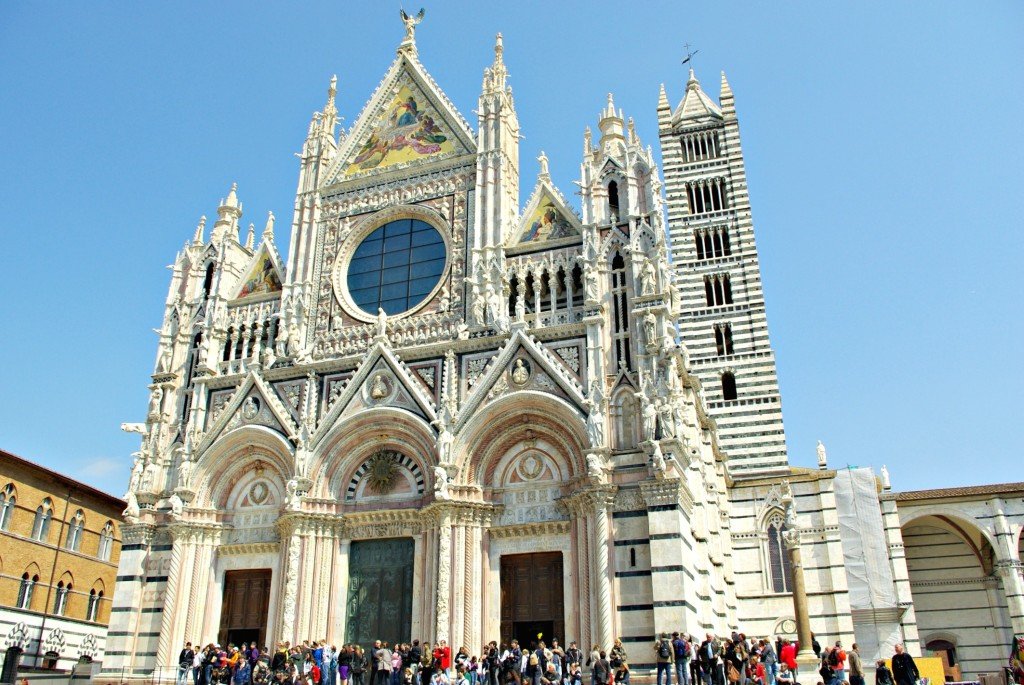 My heart may have skipped a beat when we stepped from the north aisle of the duomo into the Library (Libreria Piccolomini).  I can only describe it as sensory overload.  The still vivid frescoes by Bernardino Pinturicchio tell of the life of Piccolomini (the much loved and rascally Pope Pius III) from his early years, to his ordination, to when he died trying to mount a crusade against the Turks.  The three ladies sculpture (Tre Grazie) is Roman from the 3rd Century.  The Romans copied it from a Hellenistic work! 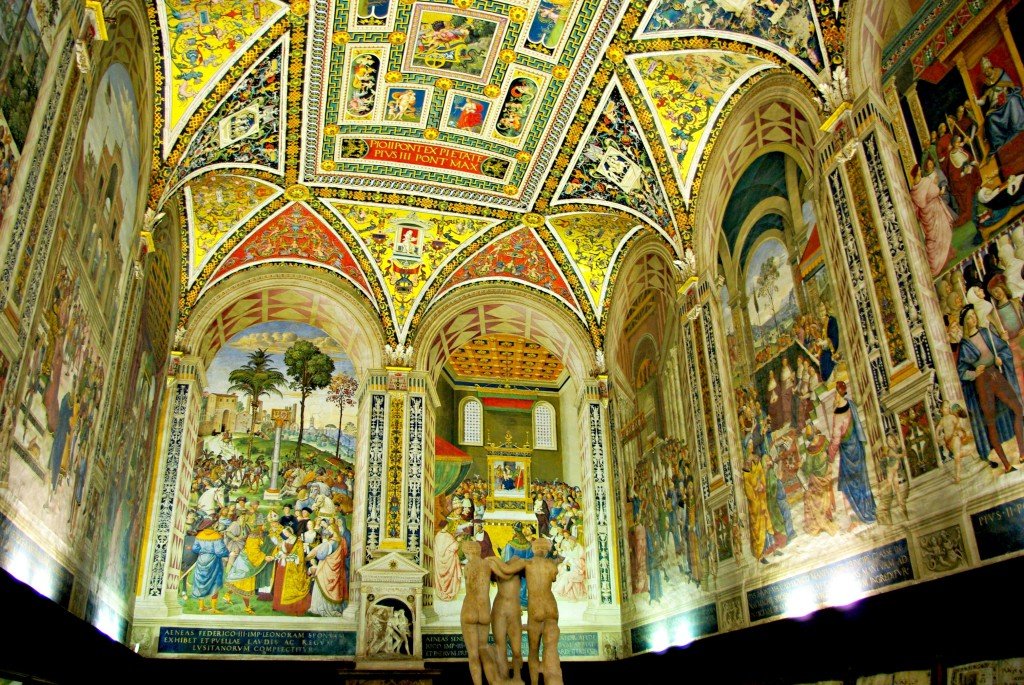 A close up of the ceiling using a different camera. 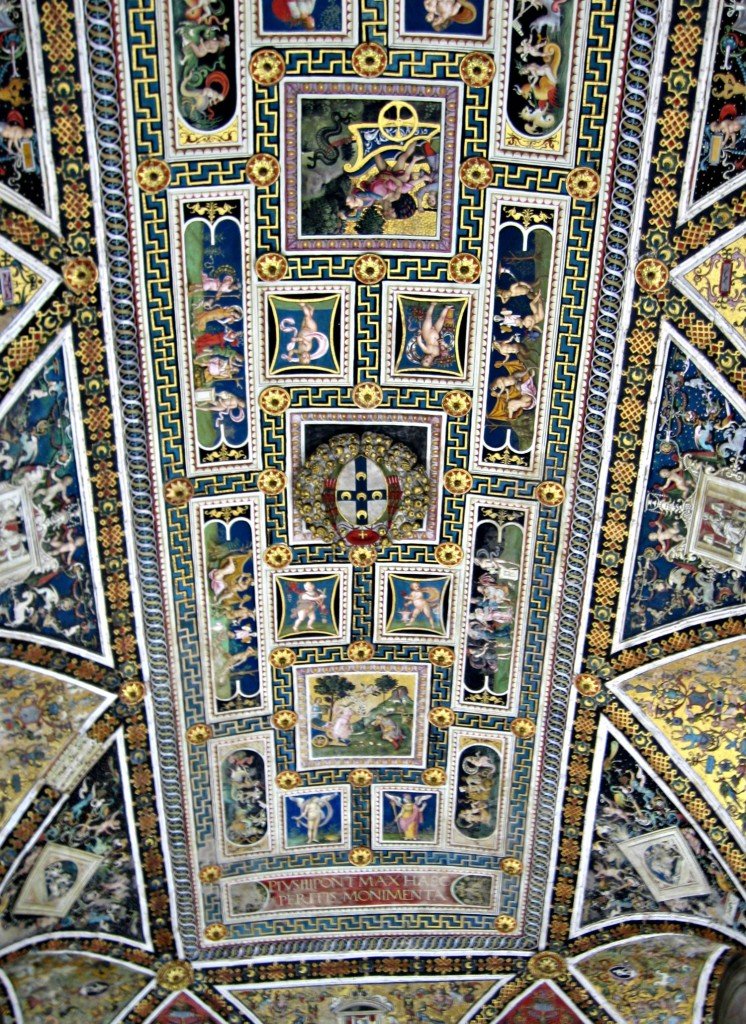 The floor coverings over the marble mosaics can be seen in the photo below.  The black and white marble feature is continued from the exterior of the duomo. 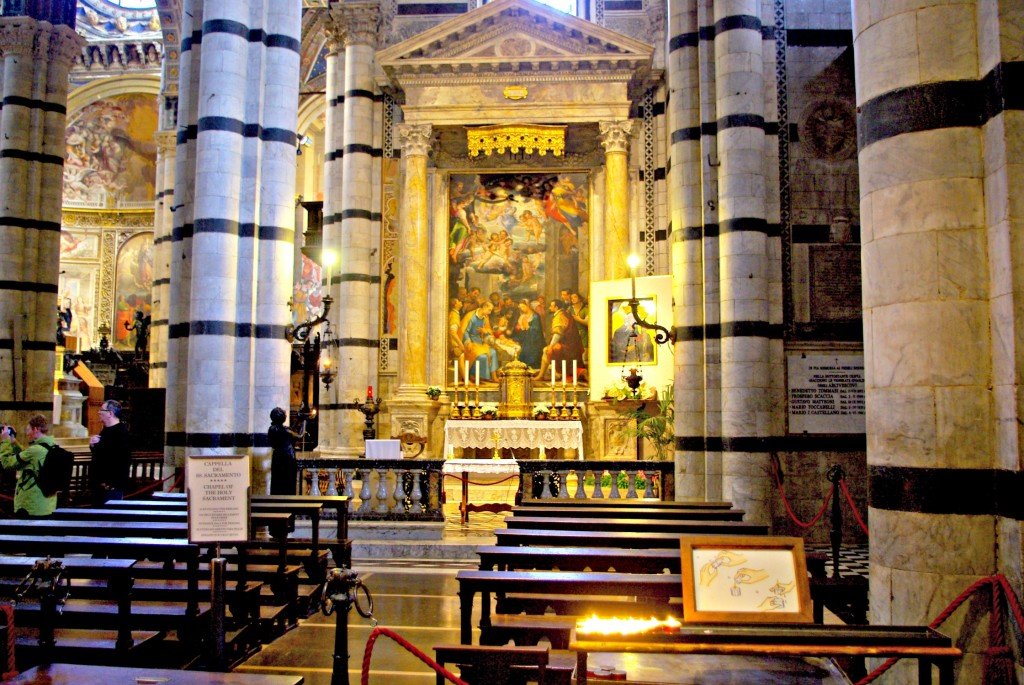 Marble Floor Panel.  A difficult photo to take but it does give an idea of one type of panel. 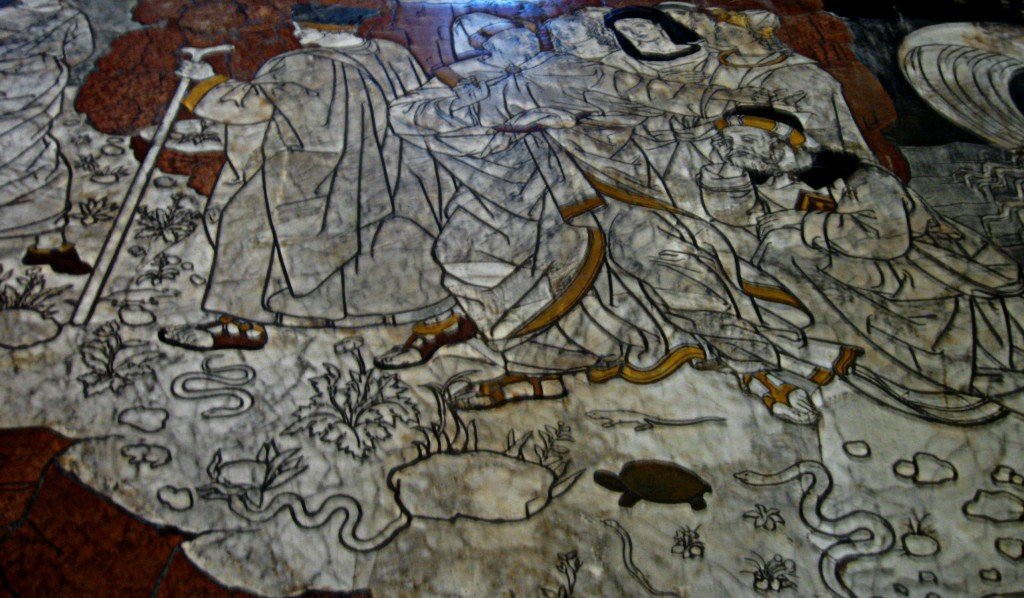 The Santa Maria della Scala situated across from the Duomo was originally a hospice for pilgrims and a hospital to the poor still operating until the 1980’s.  Can you imagine being in a hospital adorned with beautiful frescoes painted by Bartolo in the 1440’s.   The frescoes depict hospital life – a change from the usual religious subjects.  We did not visit this in 2010 but I wished we had.

Piazza del Campo is to Siena what San Marco is to Venice, minus the flooding of course.  The huge expanse of sloping pavers sourrounded by buildings has been compared to a medieval bathroom sink and it is easy to see why.  In the 13th Century when the city was prospering, a 16km tunnel was built to deliver water from the hills to a labyrinth of interconnecting passages beneath the city.  Today some 700 years later they are still supplying water to the city’s fountains.

The Palazzo Pubblico/Communale or Town Hall (1297) Situated at the lowest point of the piazza, the Palazzo has a slight concave external curve with the bottom storey being made of stone and the above crenelated floors of red brick.  In 1344 the Torre del Mangia (bell tower) was added and at 102 m tall it was then the tallest in Italy.  More importantly for the Sienese, it was taller than the one in Florence.  When built, the Palazzo which contains a beautiful internal courtyard on ground level, effectively created an amphitheatre of the Piazza del Campo. 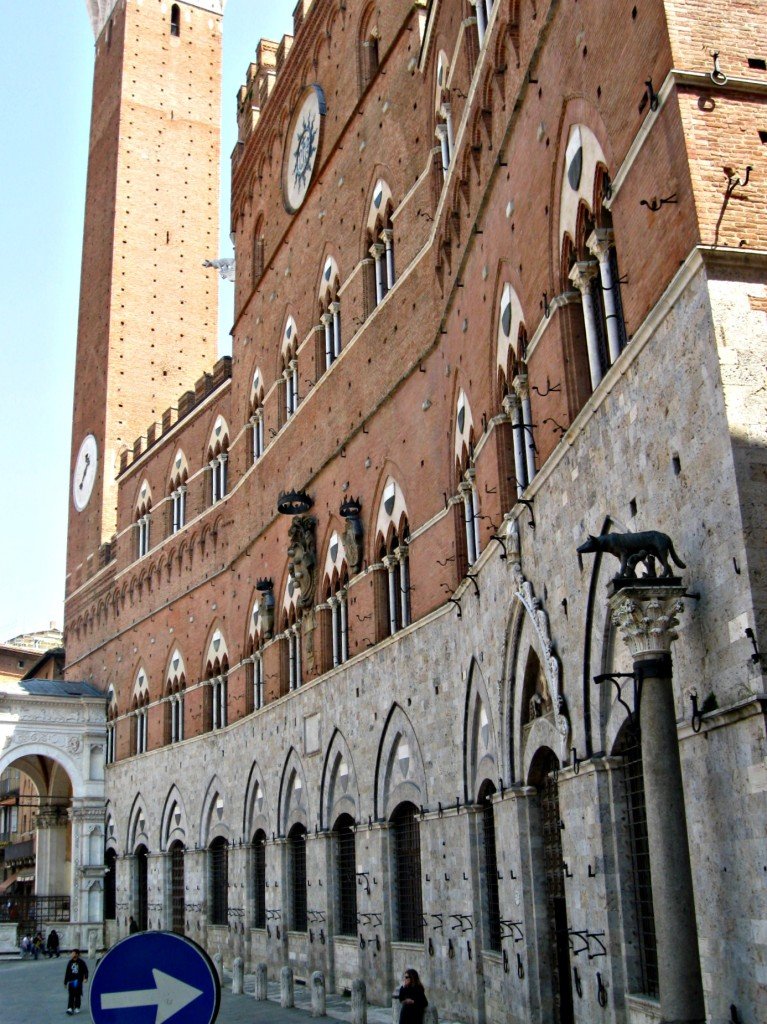 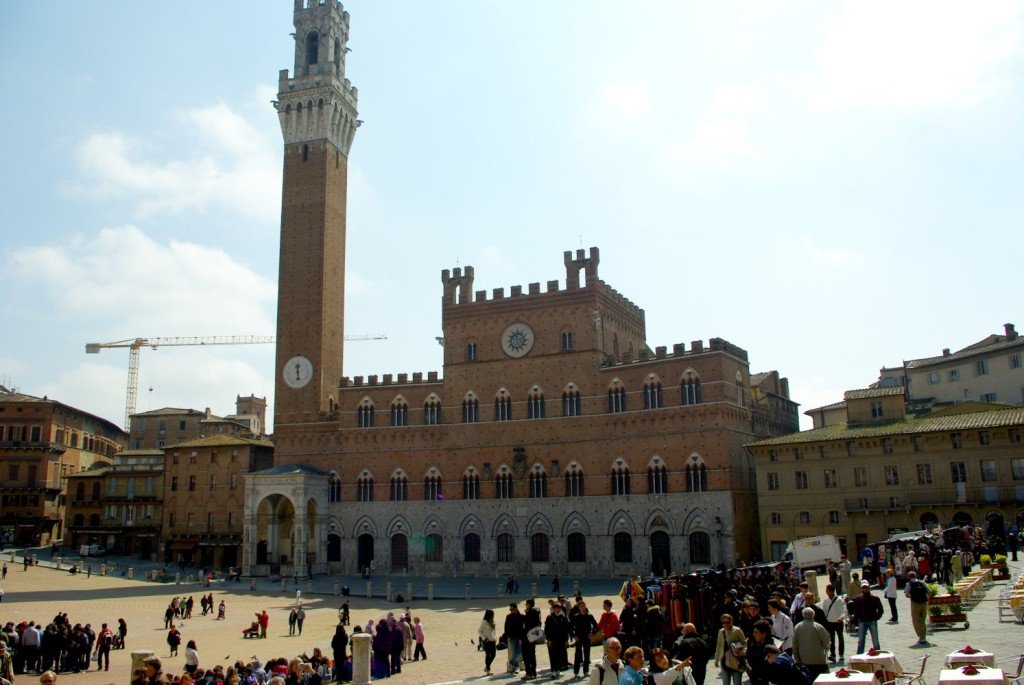 The entrance to this museum is from within the Palazzo courtyard, it’s star attraction being the Virgin Mary in Majesty fresco by Simone Martini which is meant to be spectacular.  Look for it in the Sapa del Mappamondo (World Map Room). 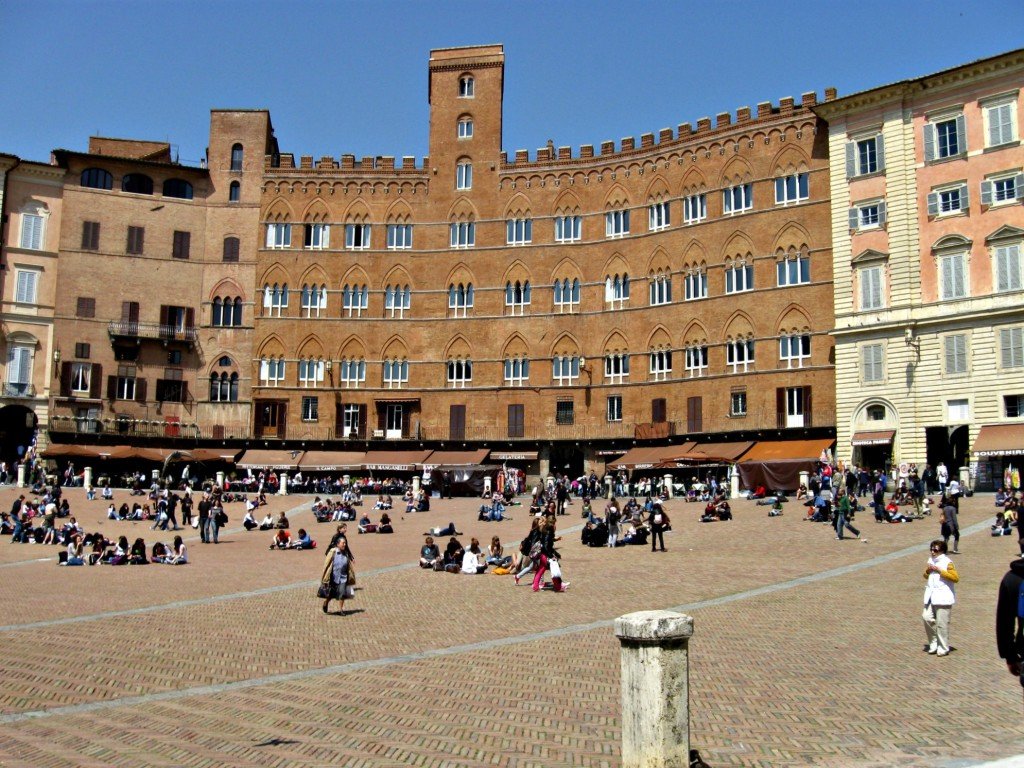 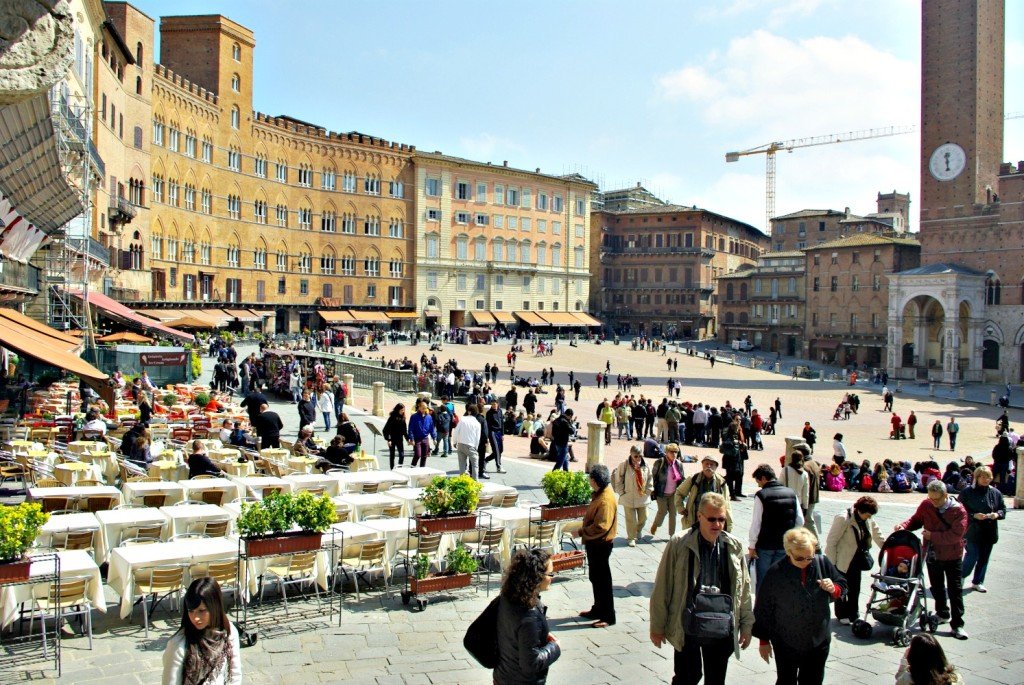 Every Piazza needs a fountain and Siena’s Fonte Gaia has been bubbling away in the piazza since 1346.  It’s current side panels are reproductions but the originals are on display at the Santa Maria della Scala (see above).  That is the fountain hiding behind the black handrails at the centre top of the piazza. 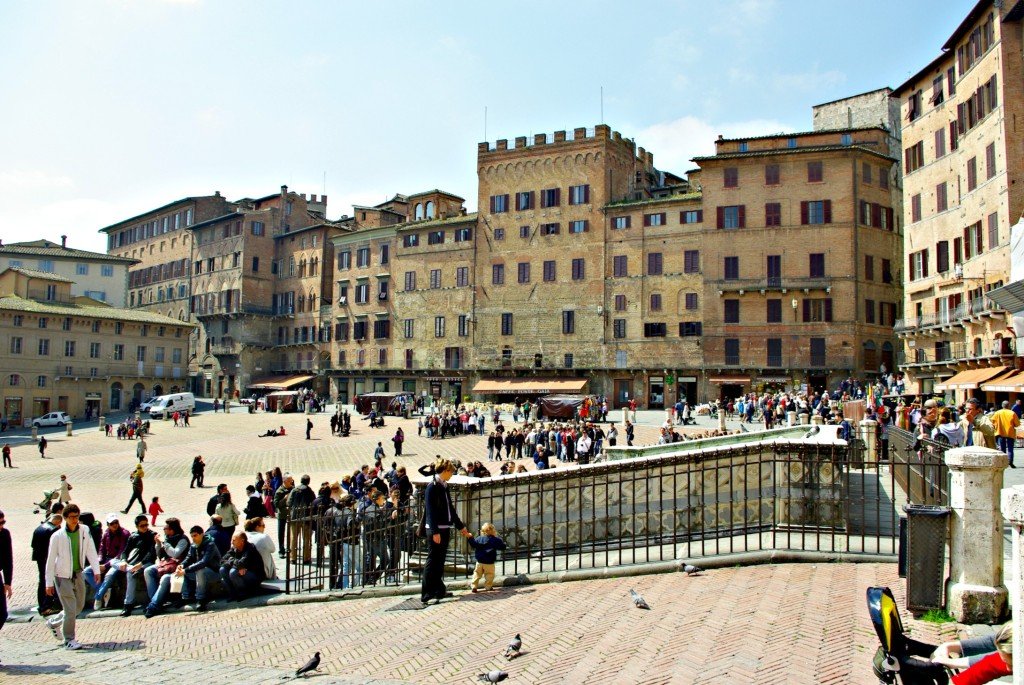 The Piazza del Campo is also the enormously crushed and fearsome venue for the Palio horse race on 2 July and 16th August.  In honour of the Virgin Mary it is a festival of eating, drinking and pageant as well as the famous wild bareback race.  The Pageant commences at 5 p.m. and the race is held in the late evening.  17 of the town’s districts vie for the Silk Banner or Palio and competition is fierce.  Whichever horse crosses the line first after three rounds of the Campo is declared the winner, whether it crosses with or without a rider.  The race takes 90 seconds and has no rules.  The centre of the Piazza becomes a mosh pit with spectators packed in like Sardines, or you could get in early and grab a coveted 1,000 Euro balcony seat.  Considering the crowds at the actual race it is an option to arrive earlier and watch the practice sessions instead (June 30th & Aug. 4th). The herringbone paving bricks are divided into nine sections to represent the original Council of Nine in the mid 14th Century.

If you are lucky enough to be staying in Siena make sure you join the afternoon Passegiata where locals stroll around the Piazza del Campo looking stylish and eating icecreams.  Either partake yourself or order a wine at one of the outdoor cafes and enjoy the show.

Chiesa di San Fransesco.  Located on Via di Rossi.  This church is not one of the big attractions of Siena but it has had an interesting life.  Built in the 13th Century, it was ravaged by fire in 1655, the interior was restored in 1885-1892, the facade being restored in 1894 to 1913.  The interior is a huge open space once used as an Army Barracks.  It is on route to the San Fransesco car park. 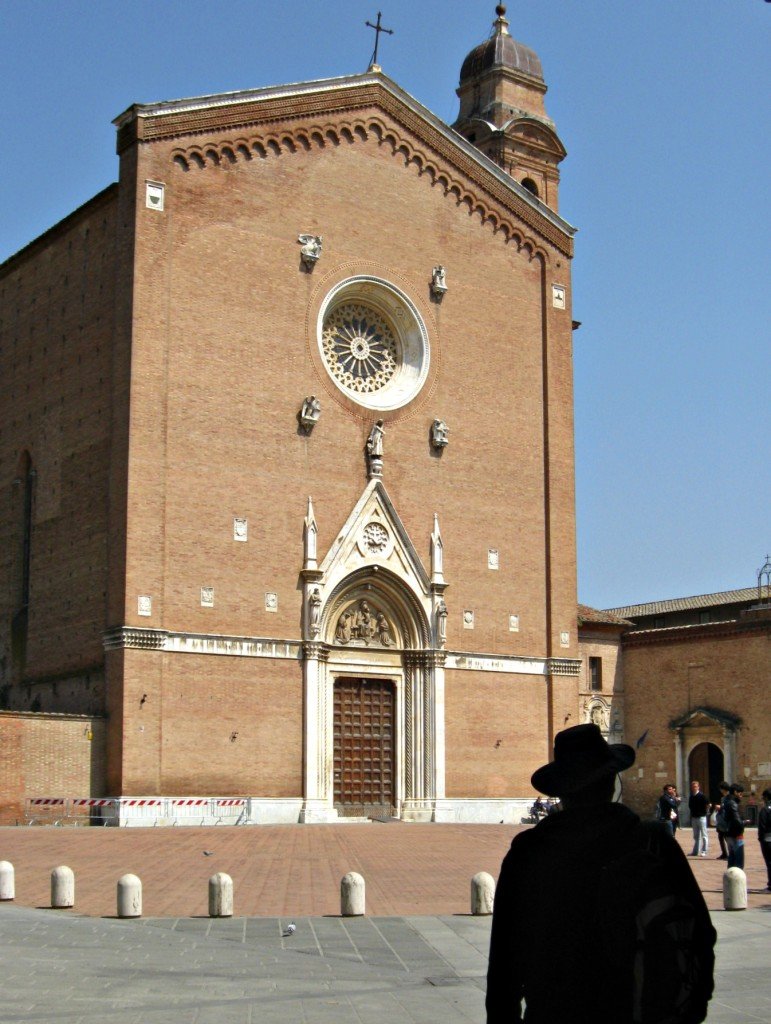 Wall tiles in escalator access to the medieval town area from San Francesco Car Park.  Which brings me to the ugly subject of parking. 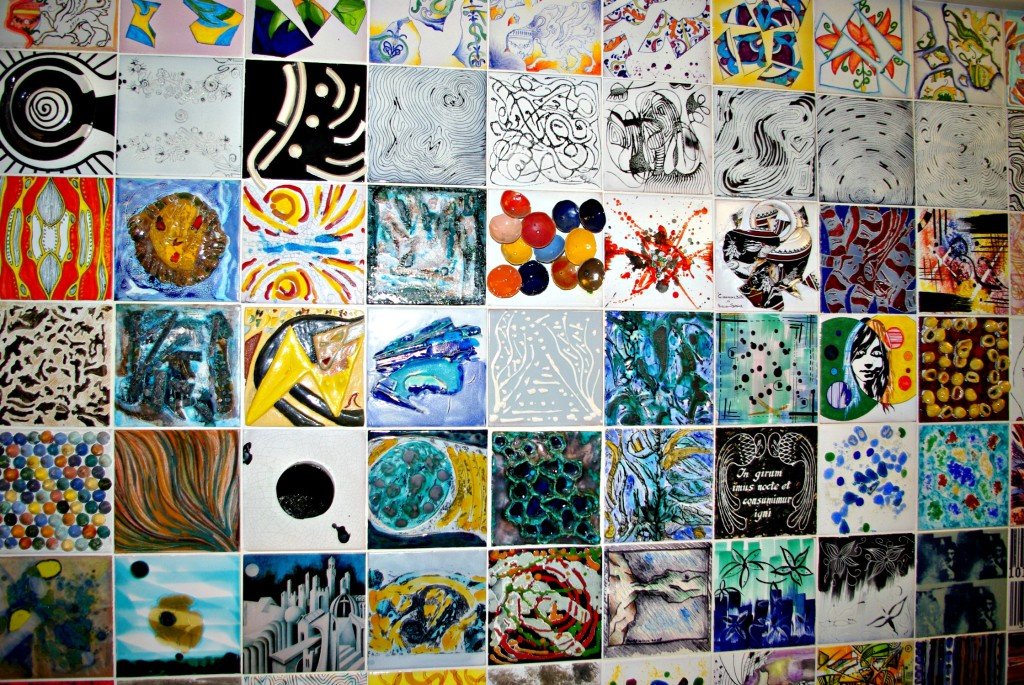 GETTING TO SIENA ITALY

The historical centre of Siena is a vehicle free zone, so motorists really need to know about PARKING.  We parked at the San Francesco car park from where we walked a short distance to the escalators that whisked us up to the historical centre (near the Chiesa di San Fransesco).  Arriving from the south the route led us to this carpark and luckily for us April was not peak season.

The parks all charge the same price – 1.60 Euro per hour and 30 Euro per day.  Your Sienese hotel may very well come with cut rate car parking of 5 Euro per day at the closest park so make sure you ask when booking.  In fact at 30 Euro per day it may well be worth while taking this into consideration when booking your hotel.

When I first read about the escalators I thought they would detract from the appeal of the historical city.  I was wrong.

Siena is well-connected by bus.  Piazza Gramsci is the bus station (ticket sales and left luggage beneath the Piazza).  Tra-In express buses only take 1.25 hours from Florence or San Gimignano and Sena takes 3 hours from Rome.

Trains arrive at Piazza F Rosselli to the north of the City.  Tra-In Bus 8,9,10 connects the train station with the bus station.

Those on a very tight budget don’t despair.  It is easy to get a good feel of Siena by merely strolling in the Piazza del Campo and Piazza del Duomo and the streets between.

Entrance to the Duomo is free from November 1st to February 28th, and the Library fee is 2 euro.

Avoid those tempting open air cafes.  Instead buy a slice of pizza, find a spot on the high side of the Piazza del Campo and watch all the action.

Remember Photographs are Free Souvenirs that will last forever.

Visit the Market.  The huge and famous Wednesday market is held at the Fortezza Medicea (the food section is hidden down a ramp under a bridge).  Other markets dot the city on different days – find out where at the tourist information centre in Piazza del Campo.

Have you been to Siena and Florence?  Do you love them both?  I do.

Townsville Rain, Rain, Rain Living in North Queensland
Next Post: Tuesday in Townsville at the Longboard »