As we emerged from the unexpectedly small luggage collection area of Noi Bai Airport, we were greeted by the driver from the Rising Dragon Hotel. It was great already having arranged somewhere to stay in Hanoi and having pre-arranged hotel pickup from hanoi airport was fantastic.  It was such a relief to find our name being held up on an A4 sheet of paper.

Having heard of the scams run by Hanoi’s dodgy taxi drivers I wouldn’t do it any other way.  Contact your hotel direct and they will arrange it. You will be surprised just how affordable it is and it’s the best way of making sure you arrive at the correct hotel. 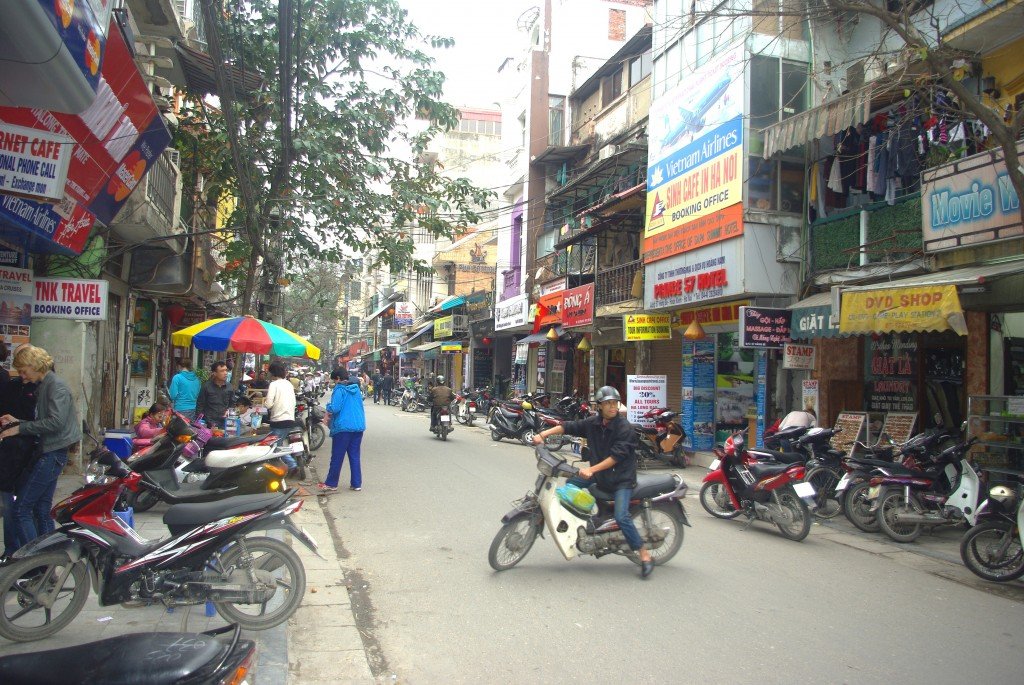 The drive in from the airport to the old quarter near Hoan Kiem Lake, was an introduction to what we could expect on the streets of Hanoi.  Traffic was slow but chaotic by comparison with Australia.  We passed a cow, encased in a timber box just big enough to contain him, on a home made trailer just big enough to house the box, which was in turn attached to the back of a motor bike.  As we passed, I looked into the cow’s eyes, from an uncomfortably close distance, for a highway, or any road for that matter, but he seemed unfazed by his situation.  I guess he had done it all before. 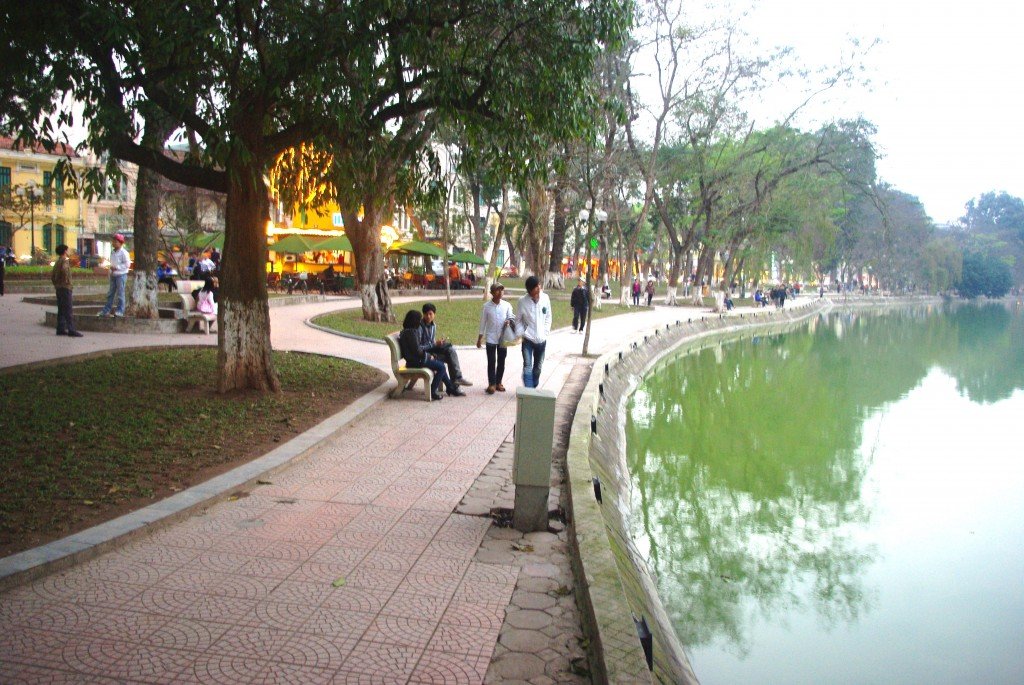 As we got closer to our destination the congestion of Hanoi traffic became chronic.  Lanes were an unknown concept, and motorbikes cheekily found their way between the cars and trucks that jockeyed for position.  Our driver bluffed his way into strategic positions, with the dexterity, though thankfully not speed, of a formula 1 driver.  Generally I ignore what is happening on such roads, in an attempt to hang on to my sanity, but Marty was commentating on the outrageous (to our eyes) acts taking place.  I was forced several times to drag my eyes from road side scenes to witness the crazy tactics of the drivers, all accompanied by a symphony of horn blowing.  Horn blowing in Vietnam is not aggressive.  It is more horn conversation – a way of saying don’t run into me I am coming alongside!  When we finally stopped, it was with the relief/regret felt at the end of a hair-raising side-show alley ride. 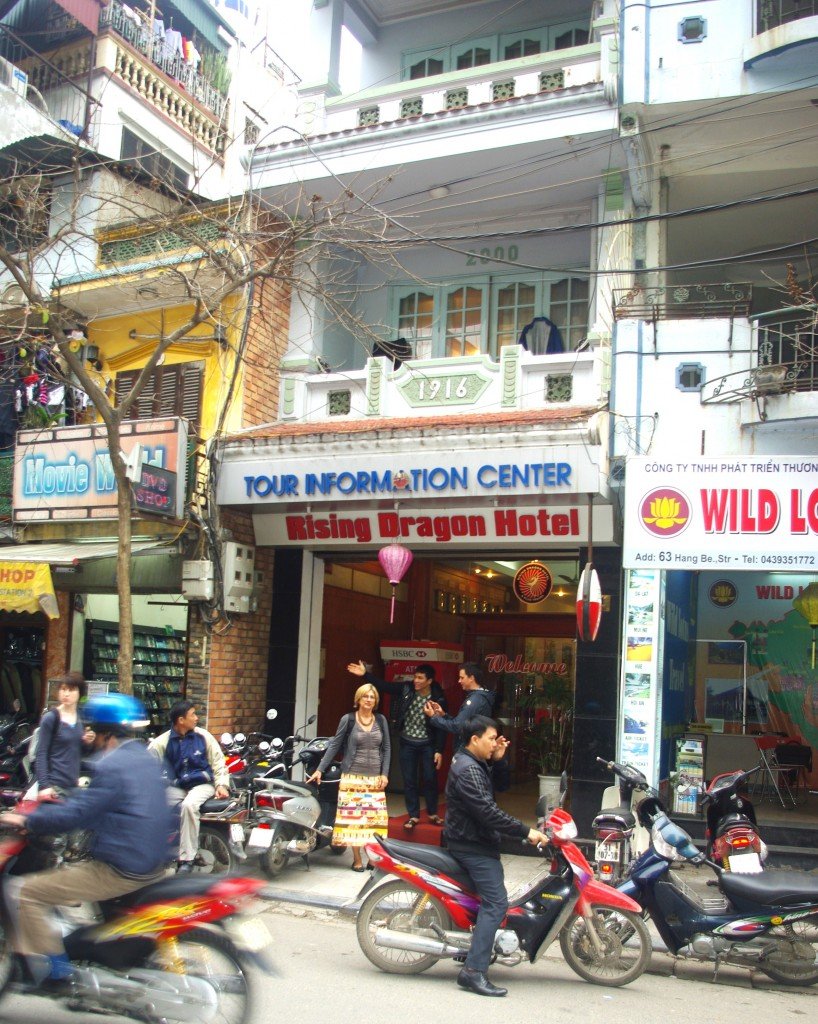 Where to stay in Hanoi Old Quarter

Bags and ourselves were whisked into the foyer of the Rising Dragon Hotel.  We found ourselves in a tall thin building as is the norm in the Old Quarter of Hanoi.  Like the Vietnamese people themselves, the buildings were slender and jammed up against each other in a familial fashion.  When space becomes too tight, and finances allow,  another floor is added – a perfectly sensible idea.

Temple in the old quarter of Hanoi where Rising Dragon is situated. 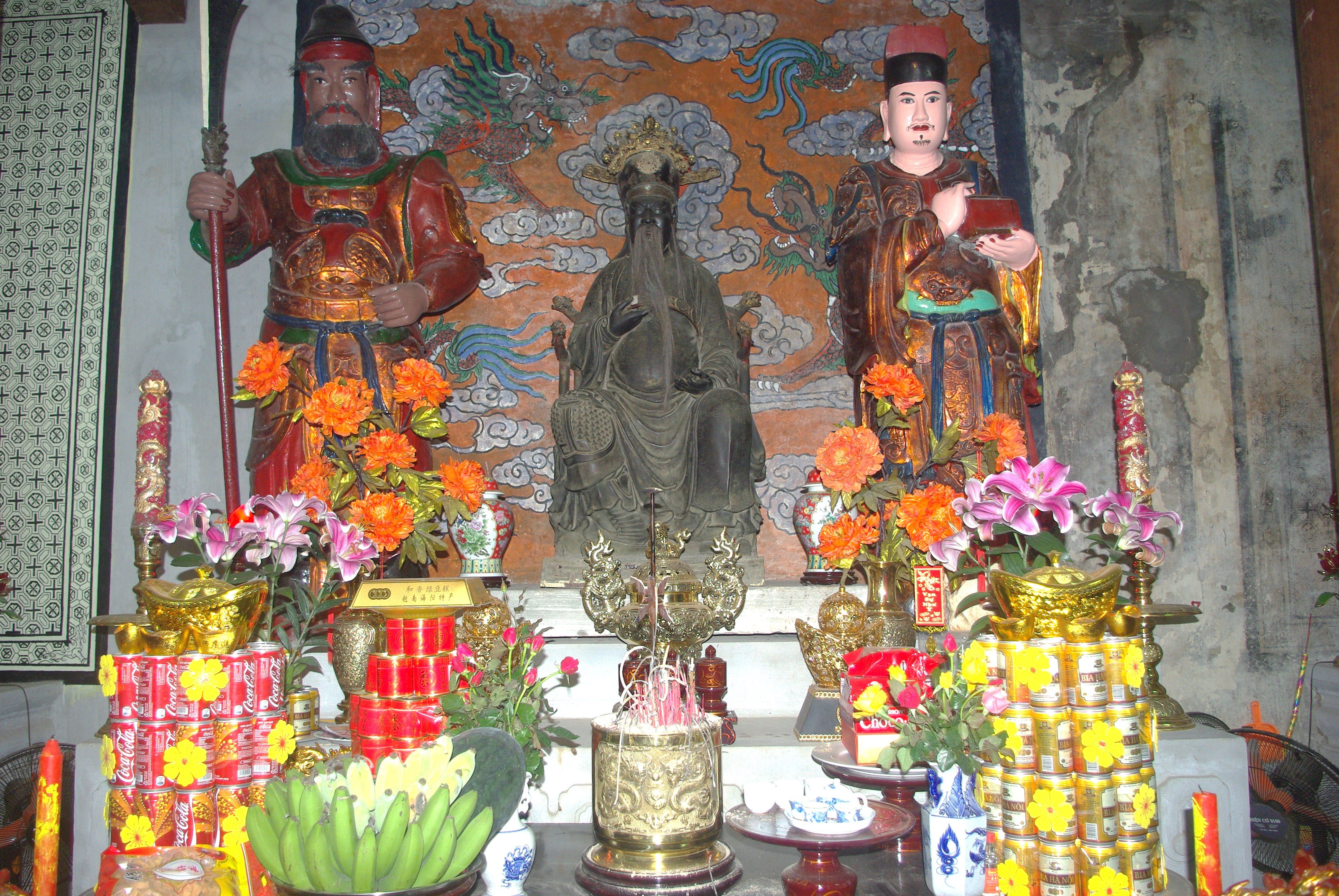 Greeted by David Trung, the entrepreneur manager and his smiling receptionist, we were ensconced in our gratis upgraded room in no time at all.  We were wowed by the whole place, considering it was a mere $30 AUD per night double including breakfast (Booking.com July 2018).  Even though our upgraded room was extra spacious, with windows overlooking the street, and a bathtub as well as a shower, their normal rooms were adequately sized with good beds, clean bed linen, shower, flushing toilet, air-conditioning, fridge, phone, table lamps and a window onto the internal staircase.  It was to become our home base in Hanoi and we loved it already.

Another greeting, this time a welcome note from our friend Jake, whom we were meeting up with, awaited in our room.  He had thoughtfully left us a local sim card and a note to call him when we arrived.  Catching up with each other, we got directions from a helpful staff member (who had meanwhile set up our mobile phone with the new card), to the best and nearest Bia Hoi place.  Brewed fresh daily, this preservative free beer is a favourite with locals and is a popular fun experience for travellers and expats looking for an authentic experience. The photo below is of beer corner Hanoi. 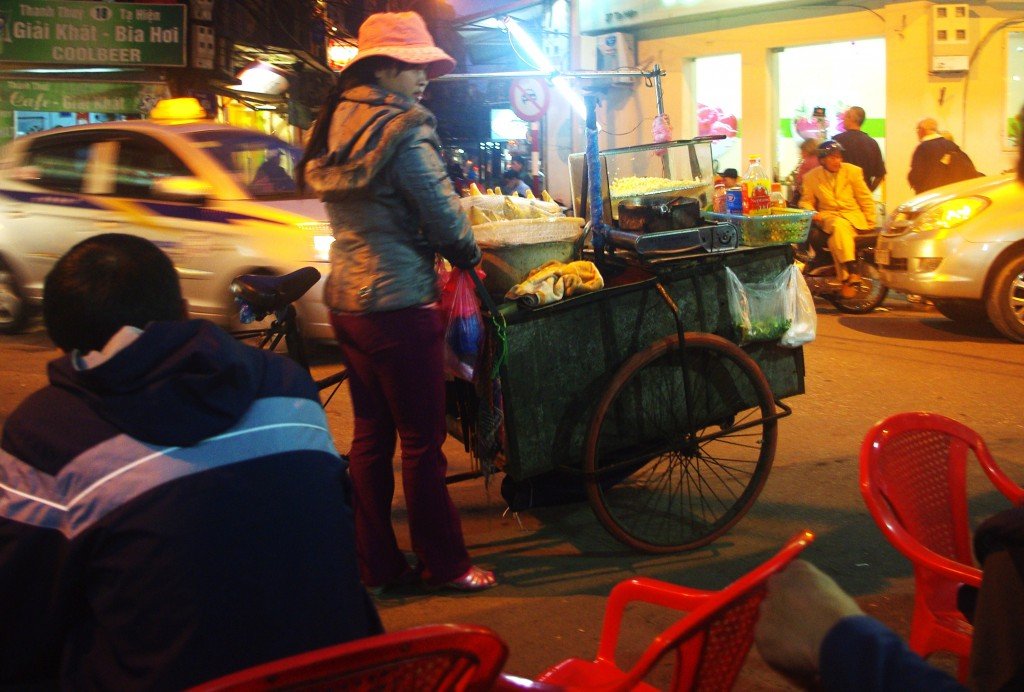 That first foray on foot into Hanoi was one of the highlights.  Early evening had produced a myriad of tiny food stalls, and an increase in numbers of pedestrians and traffic on the streets.  Footpaths were mostly out of bounds to feet in the old quarter, instead they were places to set up food stalls, park motor bikes, display produce or drink Bia Hoi.  Pedestrians justifiably took to the streets, where they were mindfully and peacefully avoided by motorbikes, pushbikes, carts and cars.  No road rage in Hanoi! 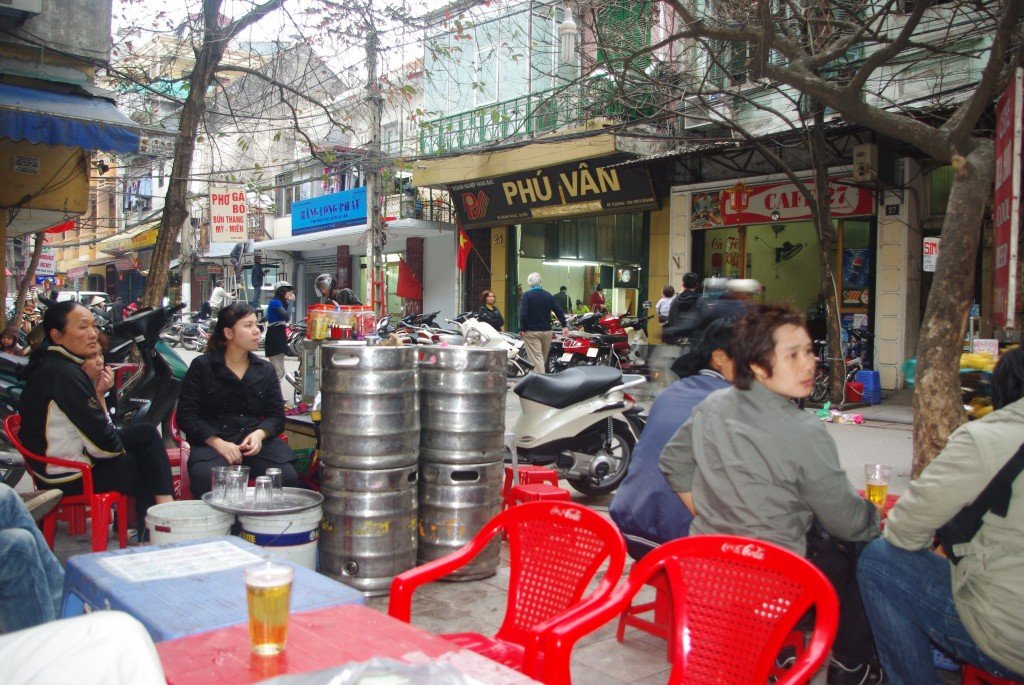 On our arrival at the busy beer corner Hanoi there was a scurry of frantic action.  The police had arrived, parked their car in the middle of the intersection and had begun pacing the kerb, to ensure chairs and patrons did not encroach onto the road.  Forced to their feet by the lady bar keep, who quickly disposed of offending chairs from the street,  patrons stood like vertical sardines on the footpath with an air of nonchalance, looking as stunned as their tinned counterparts.  It did not look like a scene we wanted to join on our first night, so we poked our head down P Luong Ngoc Quyen and found a bia hoi stall set up legally on a quiet footpath. 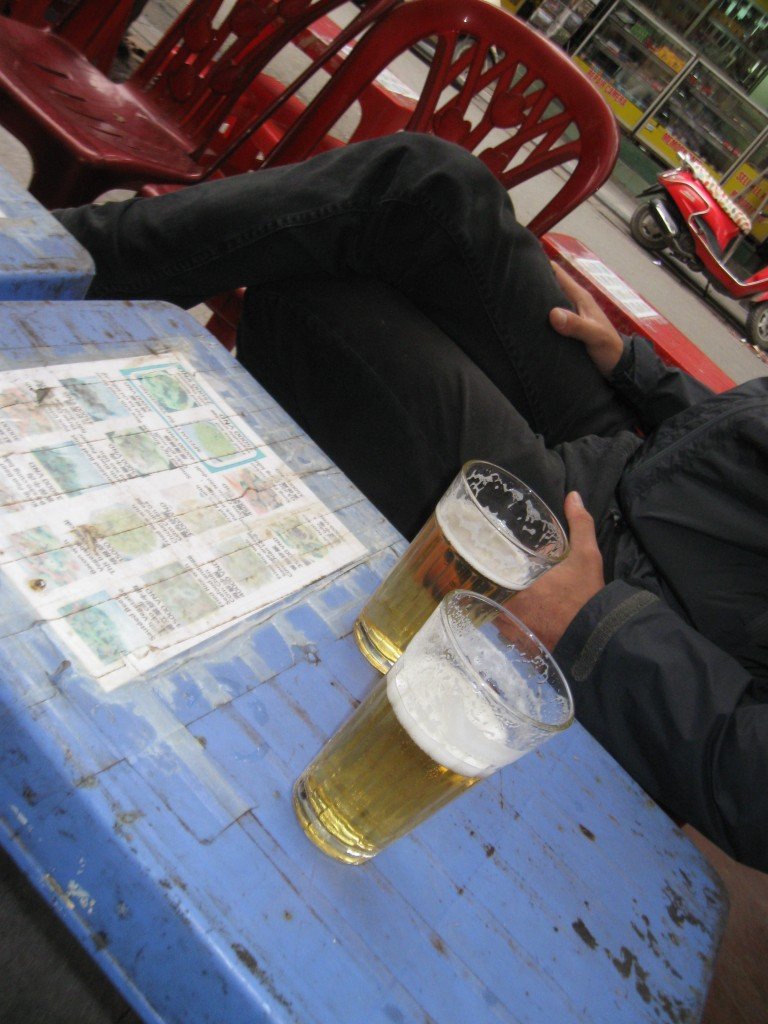 Perched on our plastic chairs, with 50 cent beers (2018) condensing on our plastic table, we breathed in the Hanoi street life.   The beer was fresh, light and went down a treat.  We were all looking down to where the action was at the corner (look at everyone in the photo!)

After a couple of drinks we set off to explore Hoan Kiem Lake.  Just streets away it was a good place to people watch and mingle with the locals without worrying about traffic.  In 2018 the streets around Hoan Kiem are pedestrianised on week-ends. We took the path around the lake and soaked up the sights on our way to a cafe tucked away in nearby Hang Hanh (street).

Jake had stumbled upon it the night before and on our first night together we shared calamari in lemon sauce, tofu and peppercorns, garlic greens, duck with onions and capsicums, rice, fruit smoothies, passionfruit drinks for 450,000 dong.  Thankfully that converted to only $20 AUD (2011). 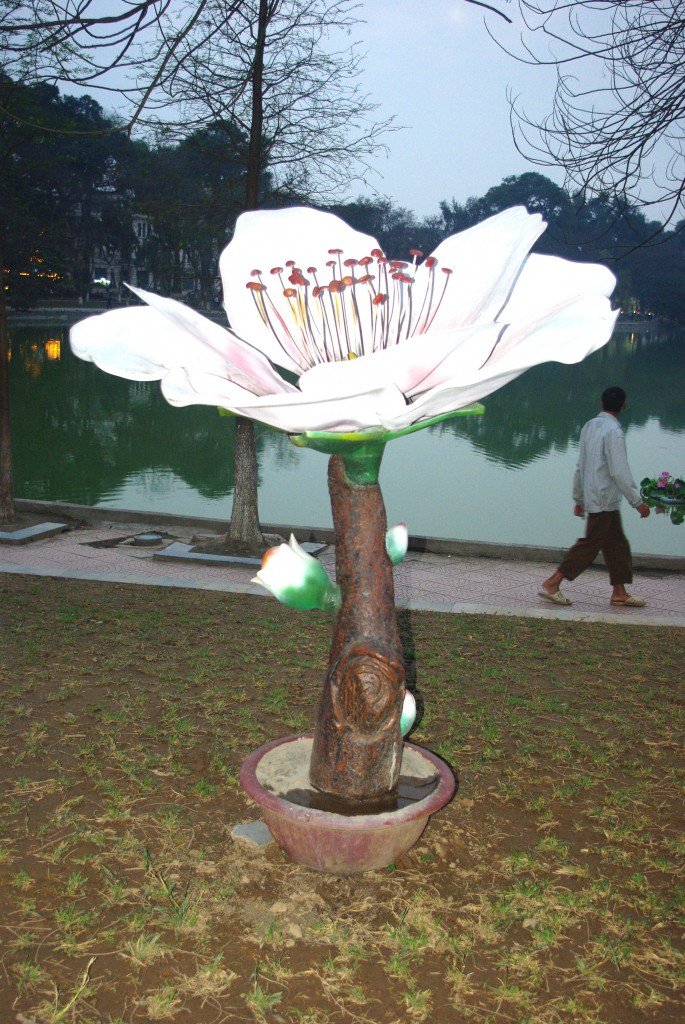 I for one was overjoyed with our introduction to Hanoi.