We were introduced to Ishiyama-dera Temple near Lake Biwa Japan by our Japanese friend Reiko. She collected us from the train station and took us to Dinner in a Japanese Home. but first the temple. It is situated in Otsu, the capital city of Shiga Prefecture, on the south-western shores of Lake Biwa.

The temple grounds cover a hill and exploring hidden corners offers a sense of adventure lacking elsewhere. It was quite a novel experience.

Kyoto temples are known for their Autumn foliage and we’d seen quite a few – the Silver Pagoda and the Golden Pavilion are two of the most famous. We experienced  Koyoto temples via the traditional Randen tram and saw the best temple for autumn foliage in Kyoto. The only downside to these beauties is the amount of people they attract.

Ishiyama-dera in Otsu, Lake Biwa, has spectacular autumn foliage. Japan specialises in autumn colour and the landscaping at Ishiyama-dera is a fine example.

The temple is lit at night in Autumn – a big draw card in Japan – maybe this is why the mornings are so quiet. Climbing the hill (Ishiyama-dera means stony mountain temple) the difference between this temple garden and the show stoppers in Kyoto is revealed.

Even wearing her spectacular autumn colours, Ishiyama-dera is a relaxed and crowd-free mountain temple. The further up the hill we went the more it felt like our own private Japanese garden.
[pinit] 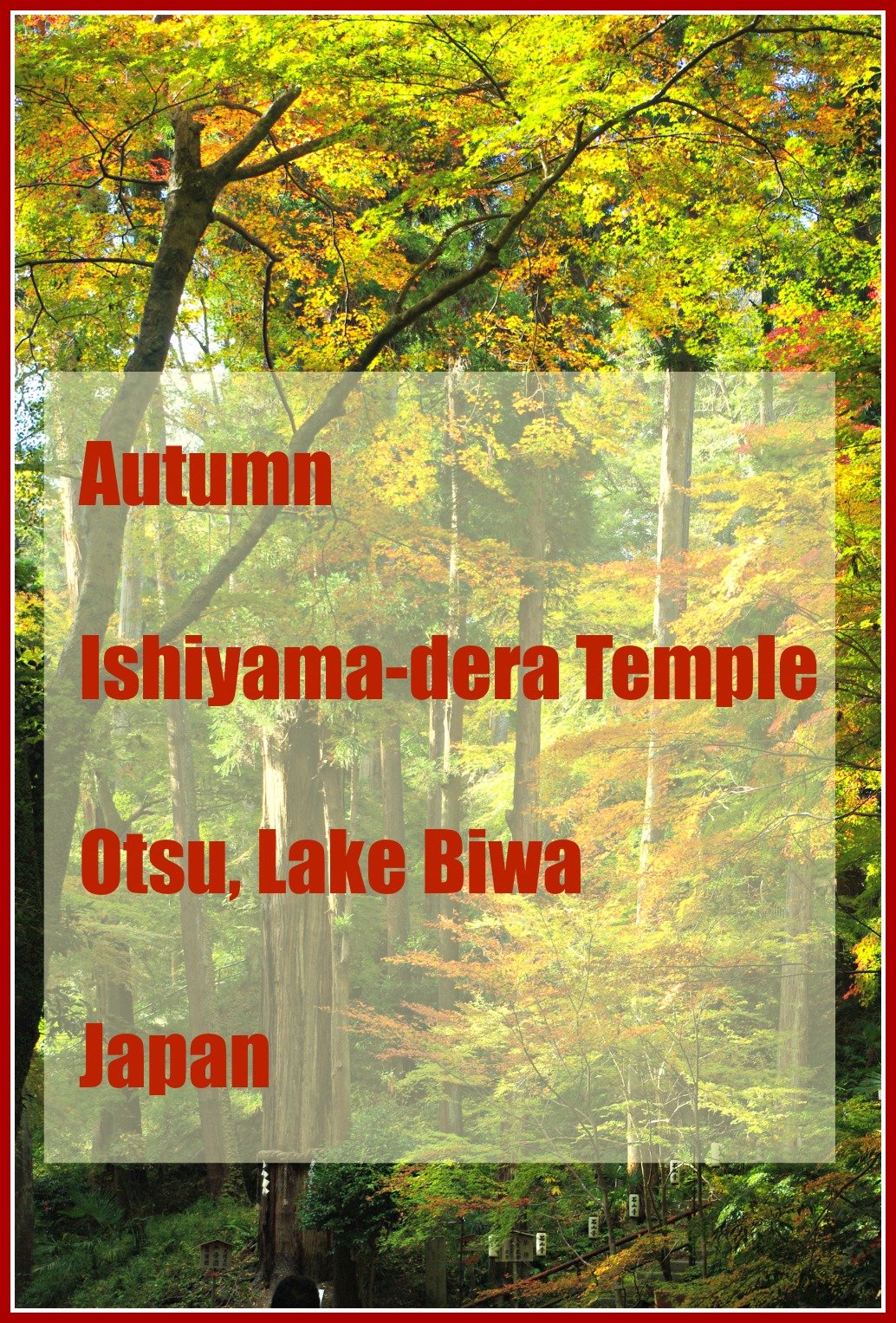 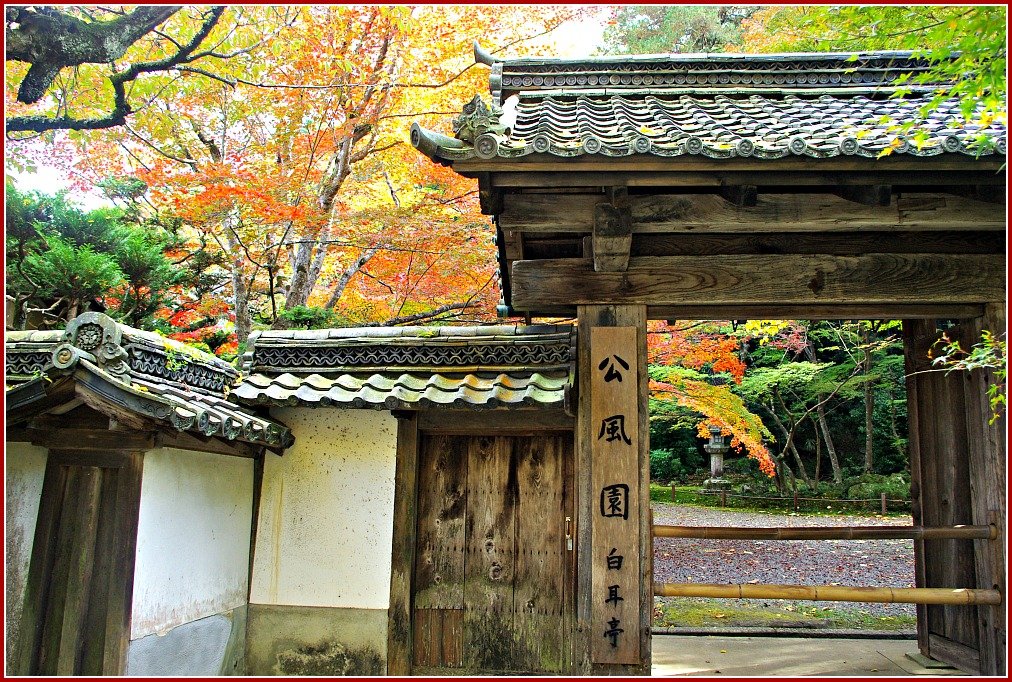 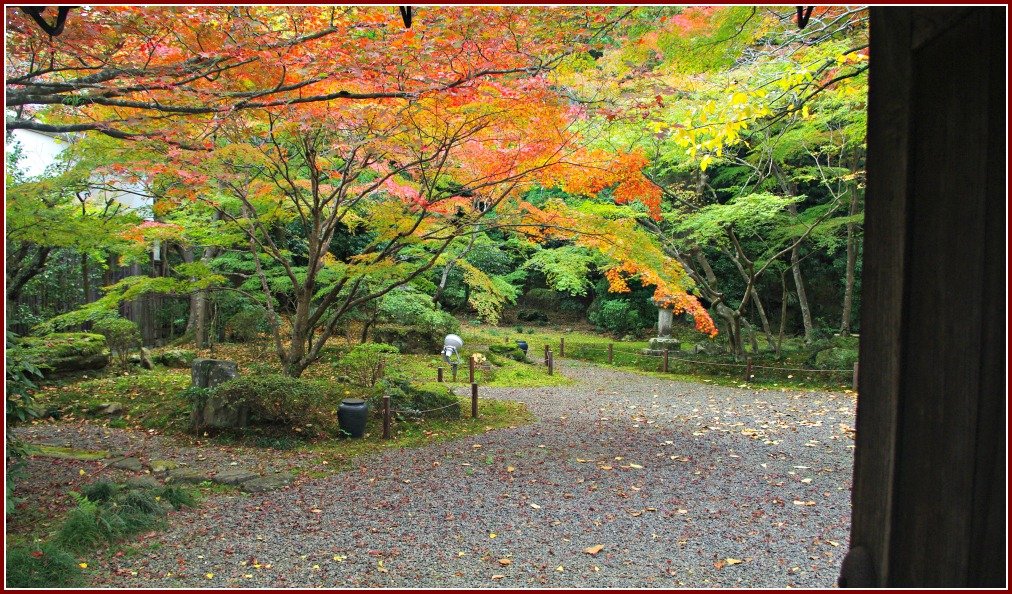 The temple is built on a base rock of Wollastonite – a recurring theme throughout the garden. 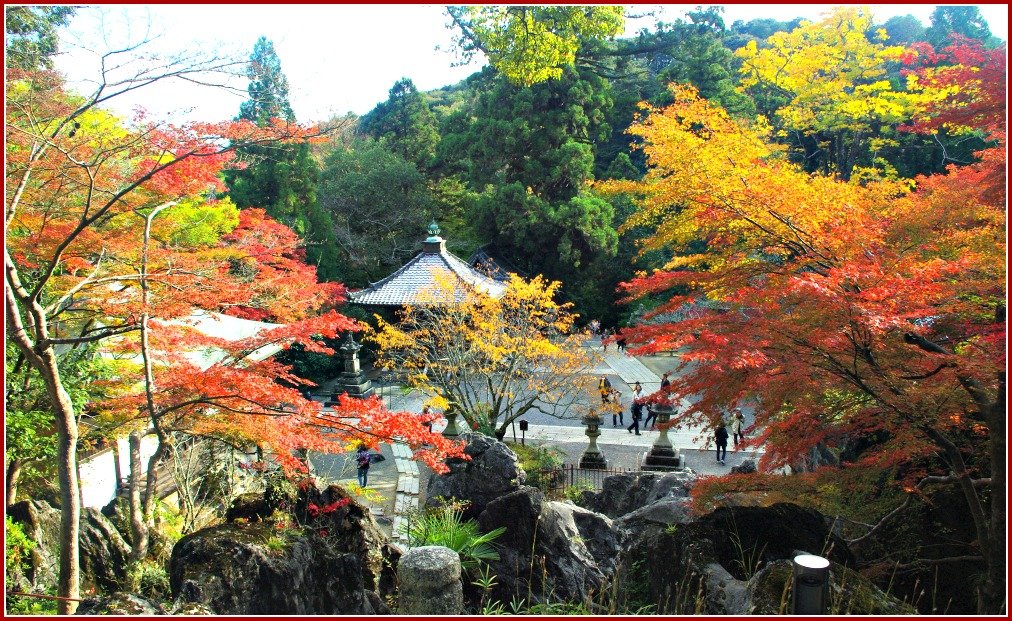 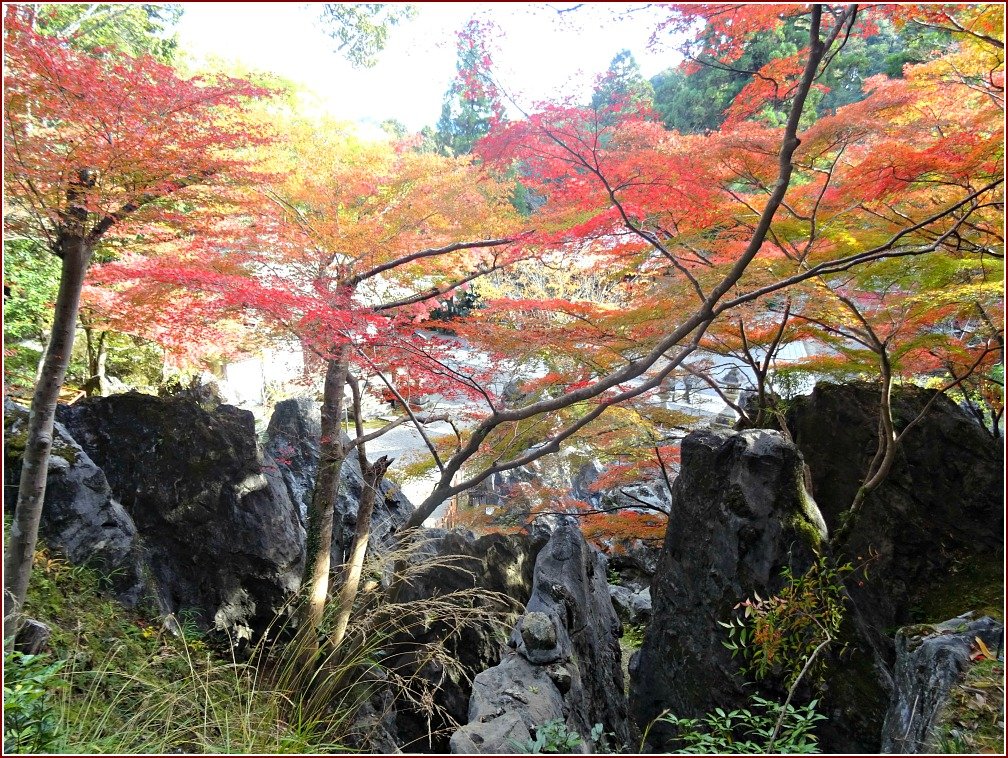 From the street outside, inviting Autumn foliage crowds behind the San-mon Gate, also called Todaimon gate at Ishiyama-dera. 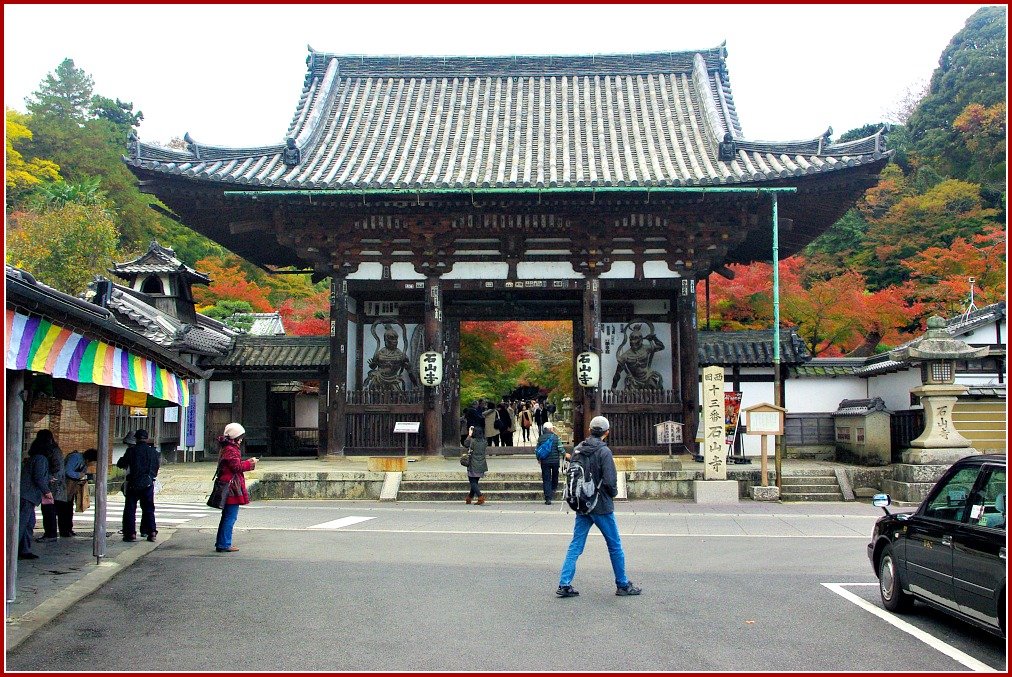 Situated on a hill overlooking the Seta River at Lake Biwa, the temple unites all To-ji Shingon Buddhist temples in Japan, making it one of the most sacred of Japanese temples.

The image of Nyoirin-Kannon (Goddess of Mercy) is enshrined in the main hall and people come here for blessings in the range of safe childbirth, protection from evil spirits, marriage, and good luck.

The view from the temple grounds of the Seta River as it leaves Lake Biwa. Lake Biwa is in the background. 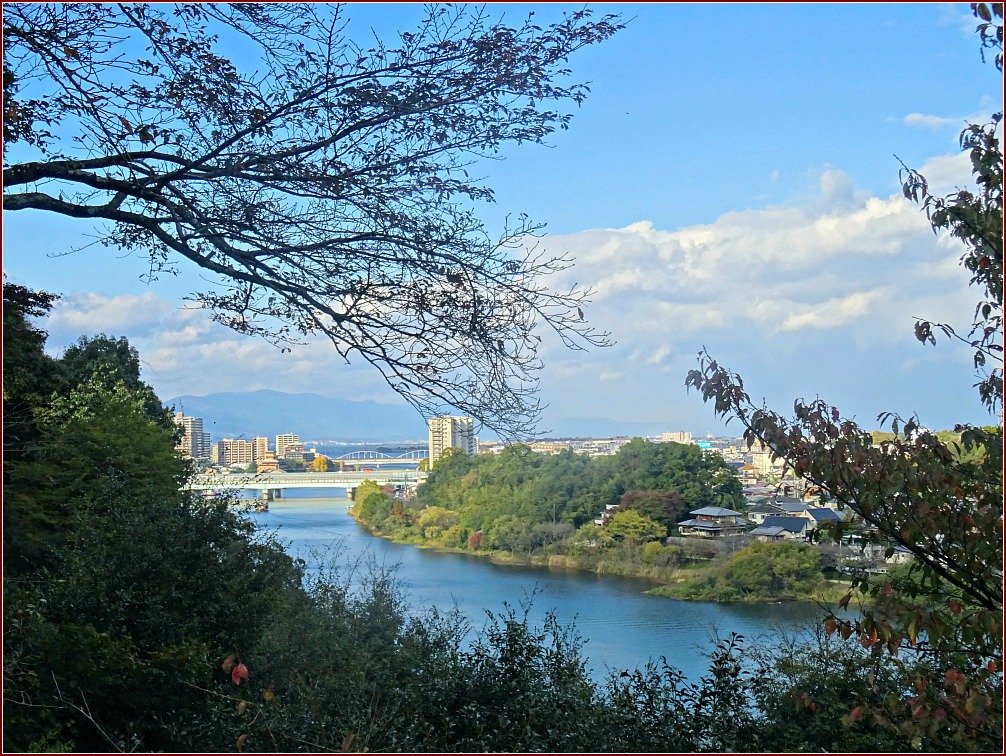 Stepping through a temple gate is like stepping into another world. 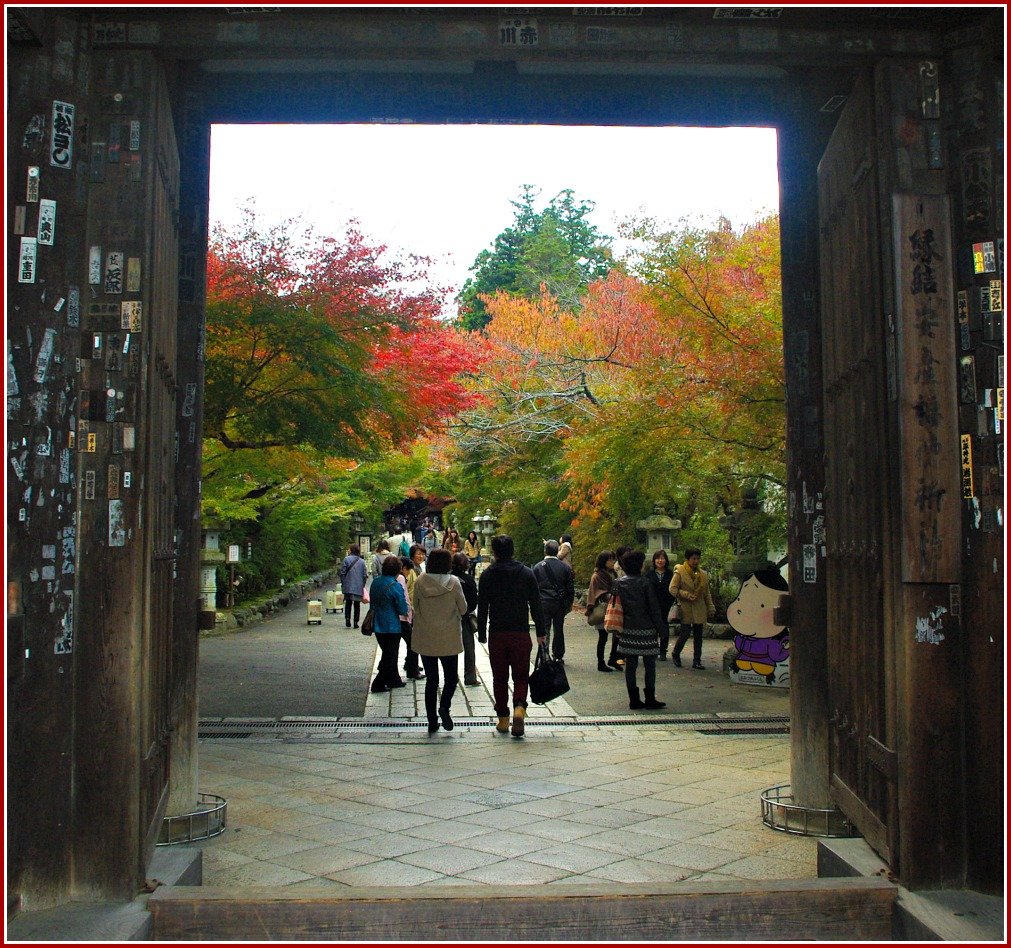 This famous female novelist began writing the Japanese Literary Classic The Tale of Genji here during the full moon in August 1004. It is sometimes given credit as being the first written Novel – and a saucy one at that. It’s 1100 pages and 54 chapters drew on tales of court life with it’s clandestine romantic affairs and took over a decade to complete.

Murasaki Shikibu museum has an amazing collection of golden screens.

There is a statue of Murasaki in the temple grounds. 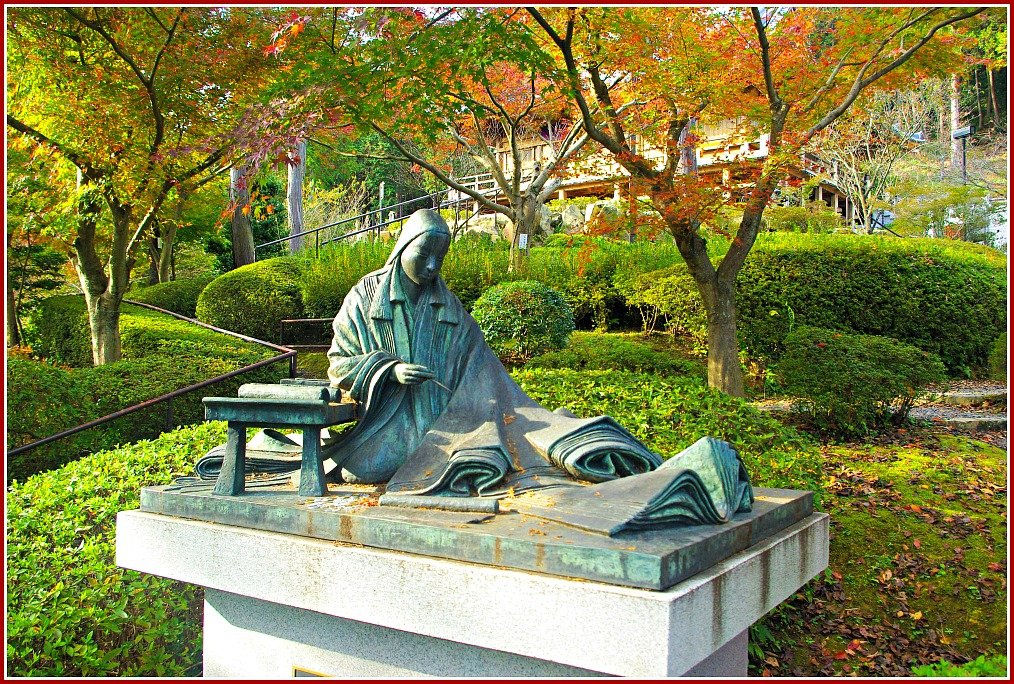 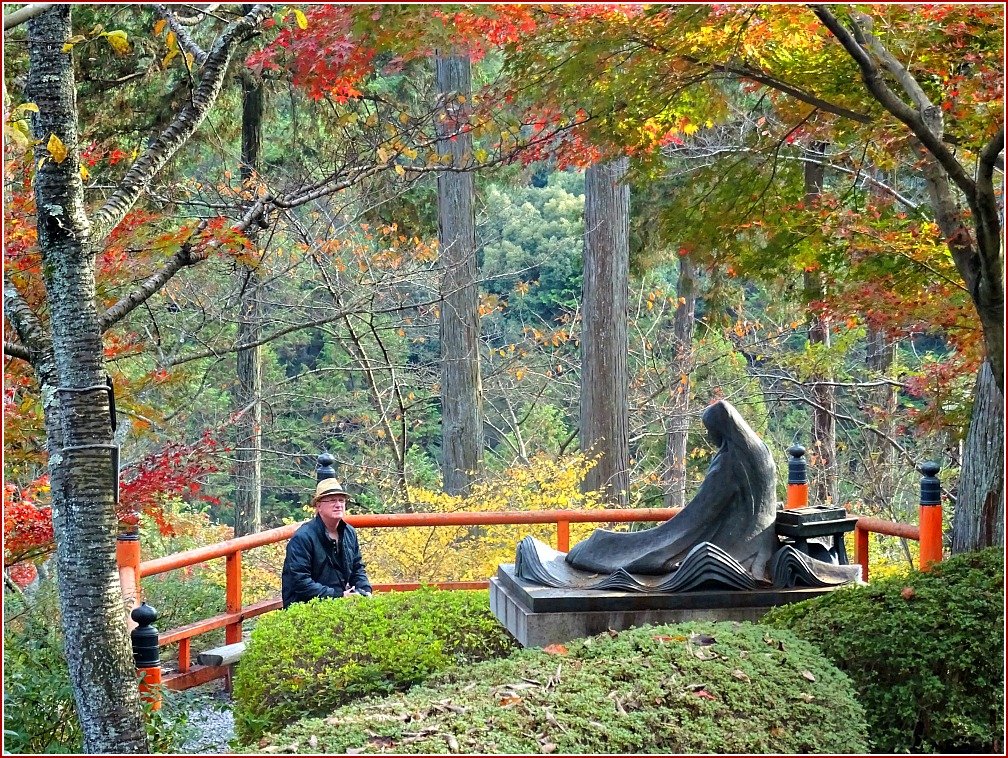 Tsukimi or Viewing the Harvest Moon

Tsukimi is the Japanese tradition of having a party to celebrate the Harvest Moon (Autumn Moon). Near the top of the hill overlooking the lake is a Full Moon Viewing platform. I wonder if Murasaki’s writings bore any influence on the erection of this particular platform?

Either way Tsukimi or Autumn full moon viewing is extremely popular. A Tsukimi celebrataion would be held in this pavilion or anywhere with a good view of the moon, with specific Full Moon rice dumplings called Tsukimi dango being served. 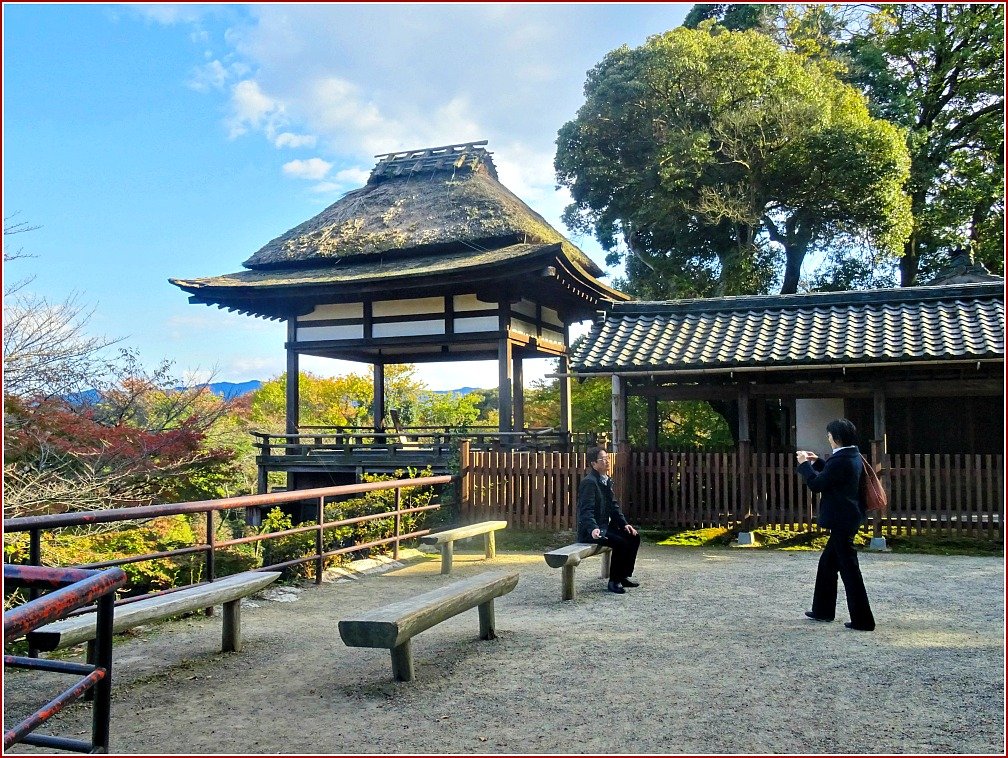 Other Foliage and Flowers at Ishiyama-dera Temple

In Spring Ishiyama-dera, also known as the Flower Temple, is known for it’s flowering Ume (plum), cherry blossoms trees and rhododendrons but it was Autumn during our visit and the deciduous trees provided a beautiful range of coloured leaves. 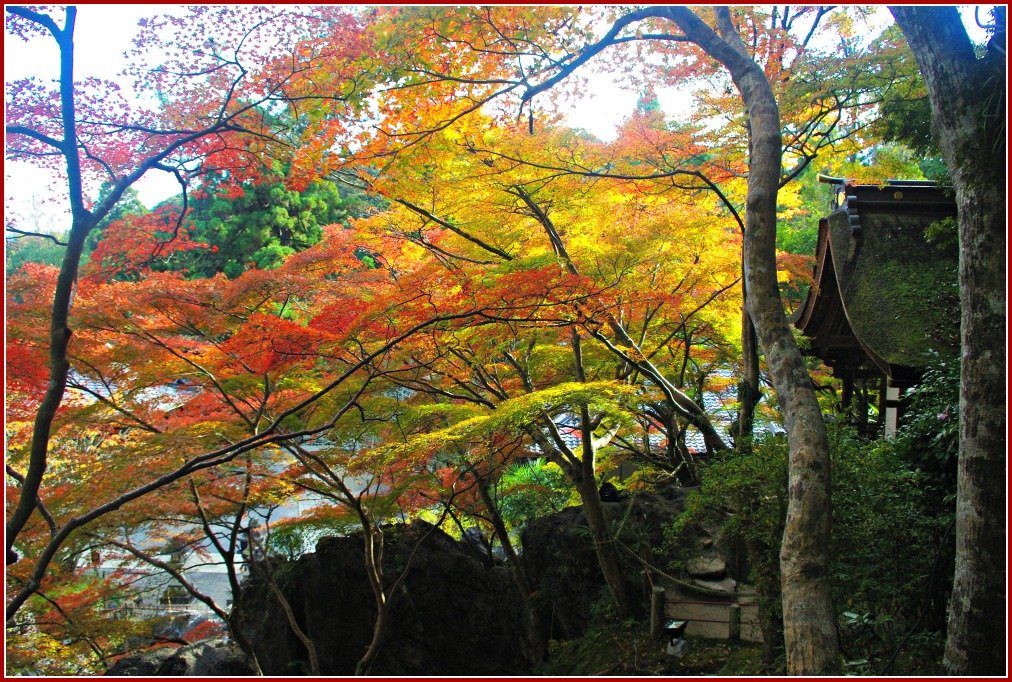 A Maple tree overhangs the statue of Murasaki and a peaceful bench. 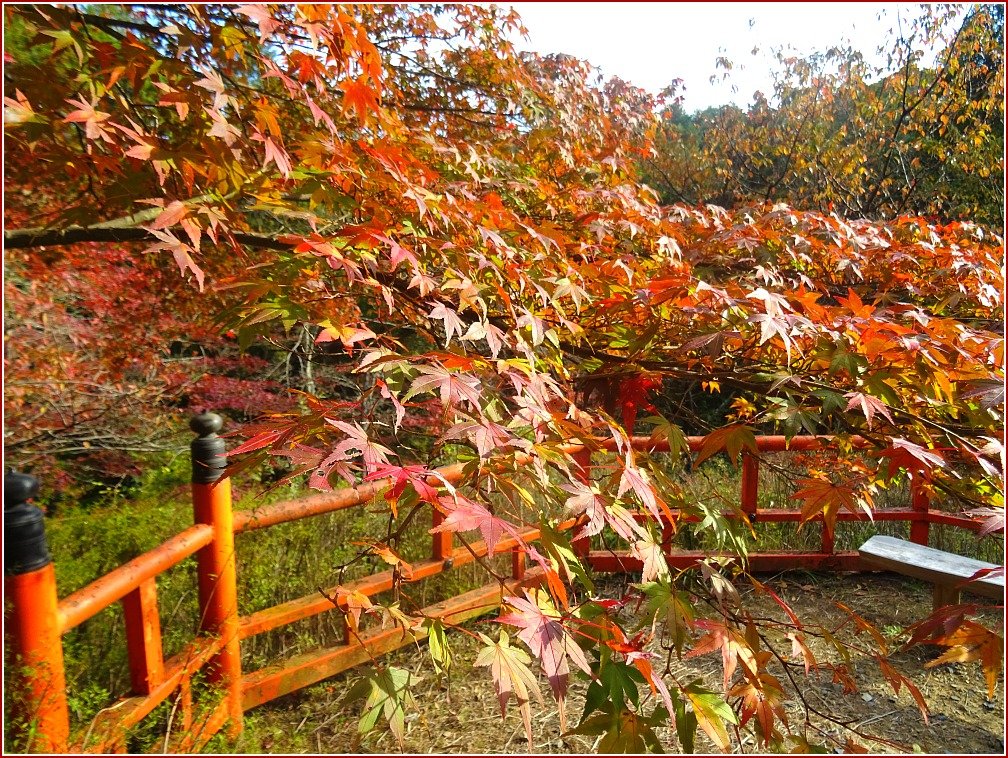 A man made waterfall in the flower garden at the base of the hill. 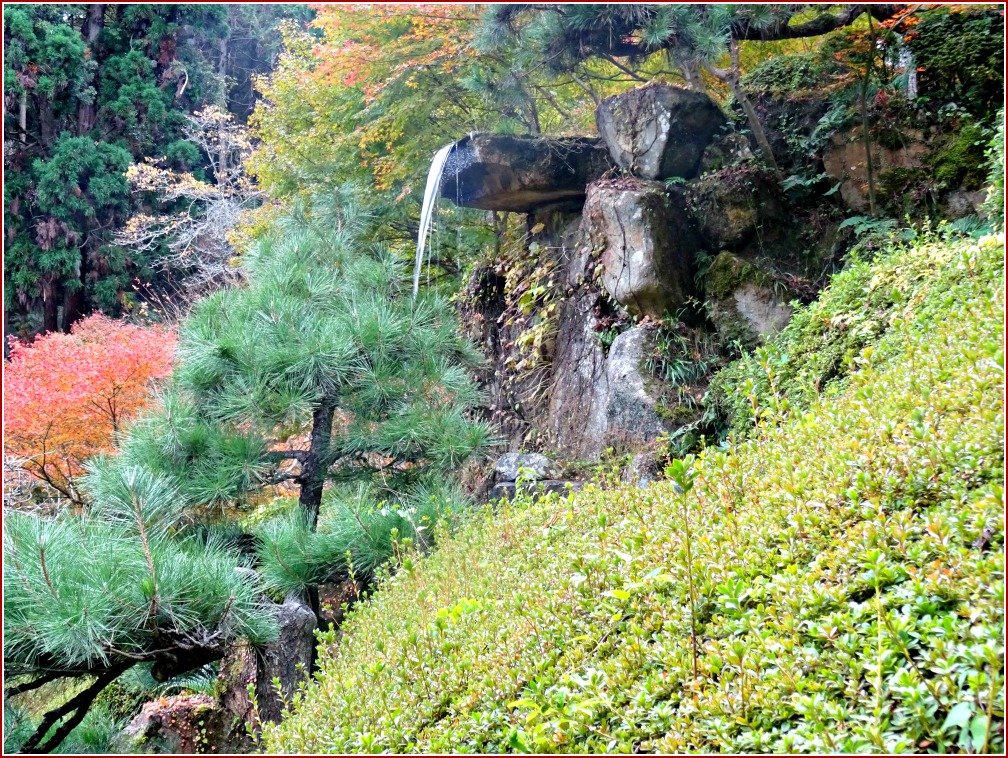 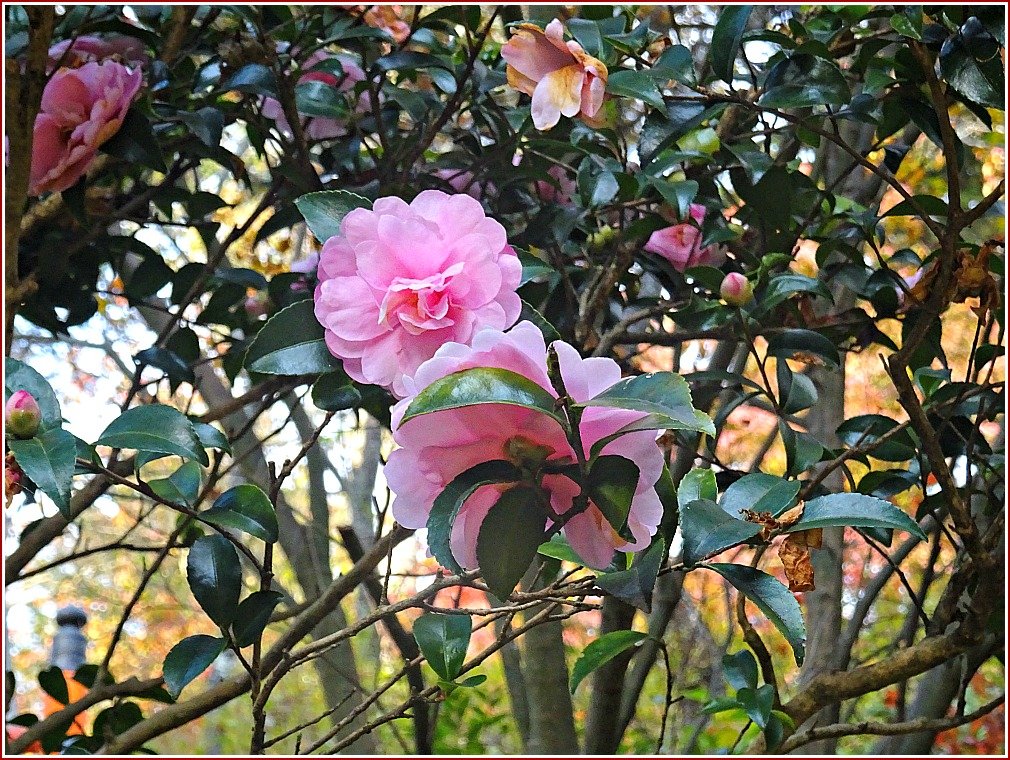 There are many pilgrimages in Japan but the most important is the Saigoku Kannon. A pilgrimage is a spiritual and physical journey which can be either sombre or festive.

Kannon is the Japanese name for the Bodhisattva of Compassion who has 33 manifestations. Symbolically there are 33 temples along the 1500 mile pilgrimage, but before the temples appeared, holy men specialising in healing miracles secreted themselves in out of the way locations to practice their craft.

When word of their miracles spread, temples were built to accommodate them. Ishiyama-dera is the 13th on the route. Traditionally the temples are visited in numerical order, but pragmatically, it is now possible to see all 33 by train from Koyto, expediting the process even further by visiting two per day.

If you wish to visit all the temples you should buy a Saigoku pilgrims’s book 930 yen or 13.16 AUD (available at Ishiyama-dera and other temples and ). At each temple your book is inscribed and stamped at a base cost of 300 yen (approx. 4 AUD).

The Kannon statue at Ishiyama-dera is only available for viewing one year in every 33 and 2016 is one of those years.

Photos were not allowed in the main hall during our visit so we took a photo looking out from the hall at the autumn colours. I love the solid timber feel of Japanese temples.

As you can see the Ishiyama-dera gardens in Autumn are a photographer’s dream. 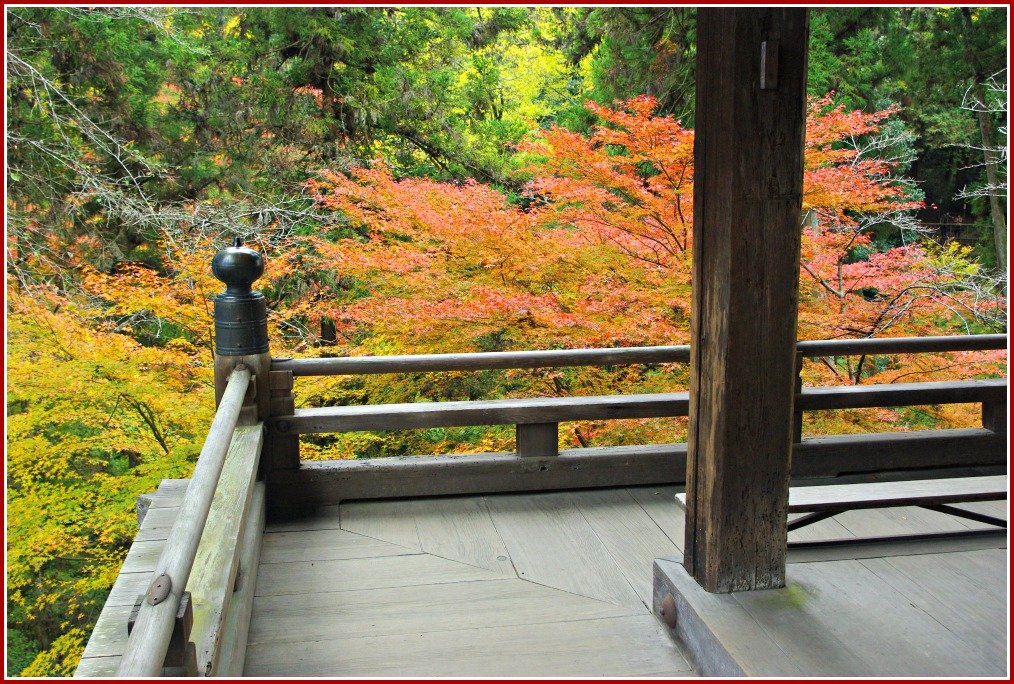 Walk up to the door and peek through the hole. 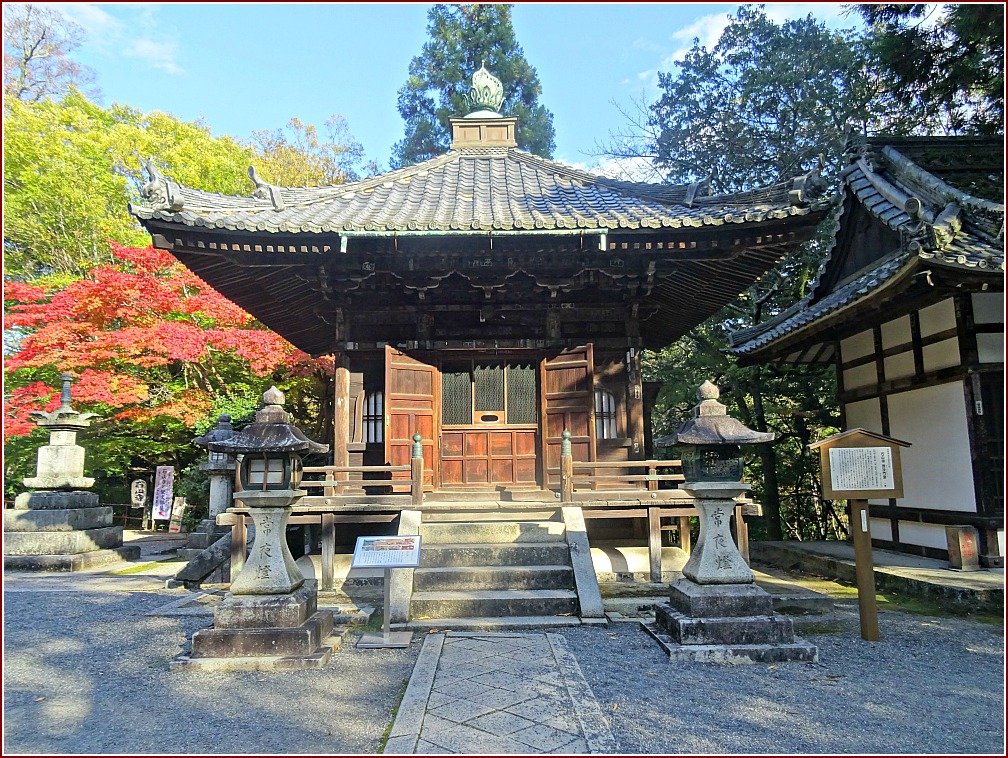 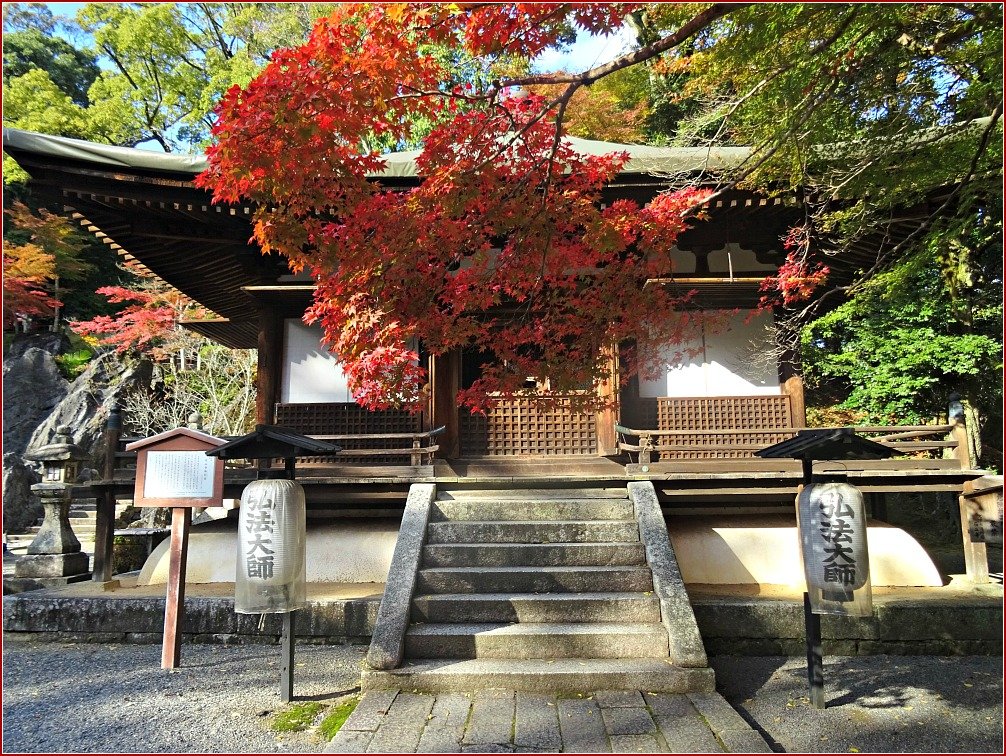 Colour is not confined to the trees. 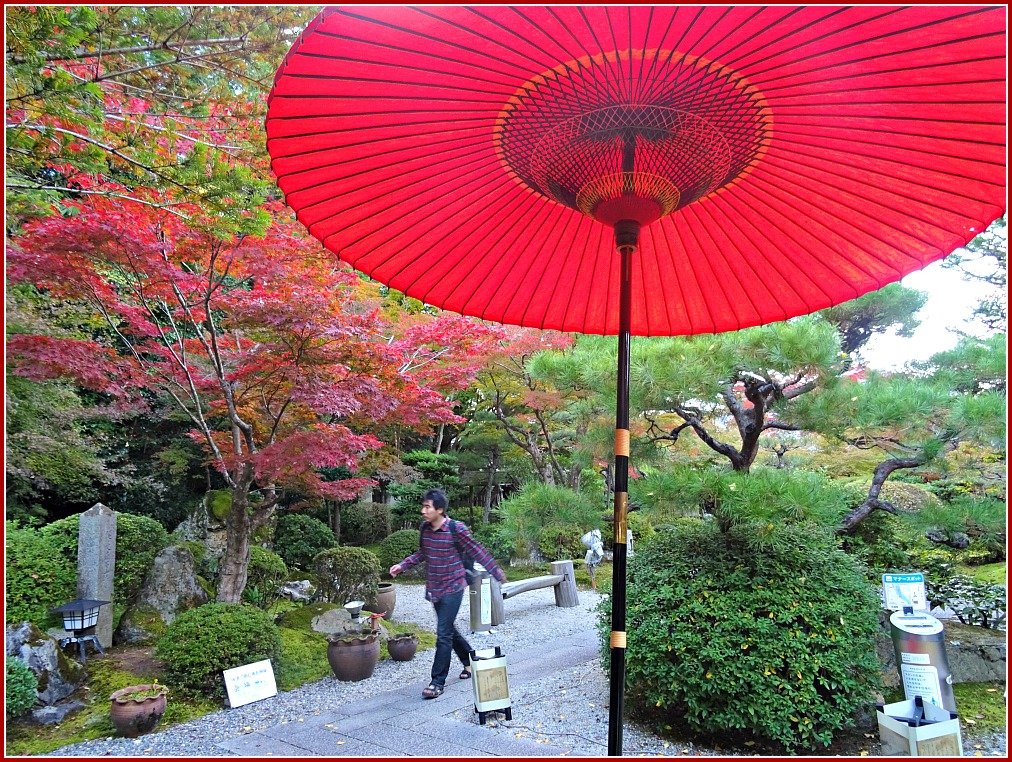 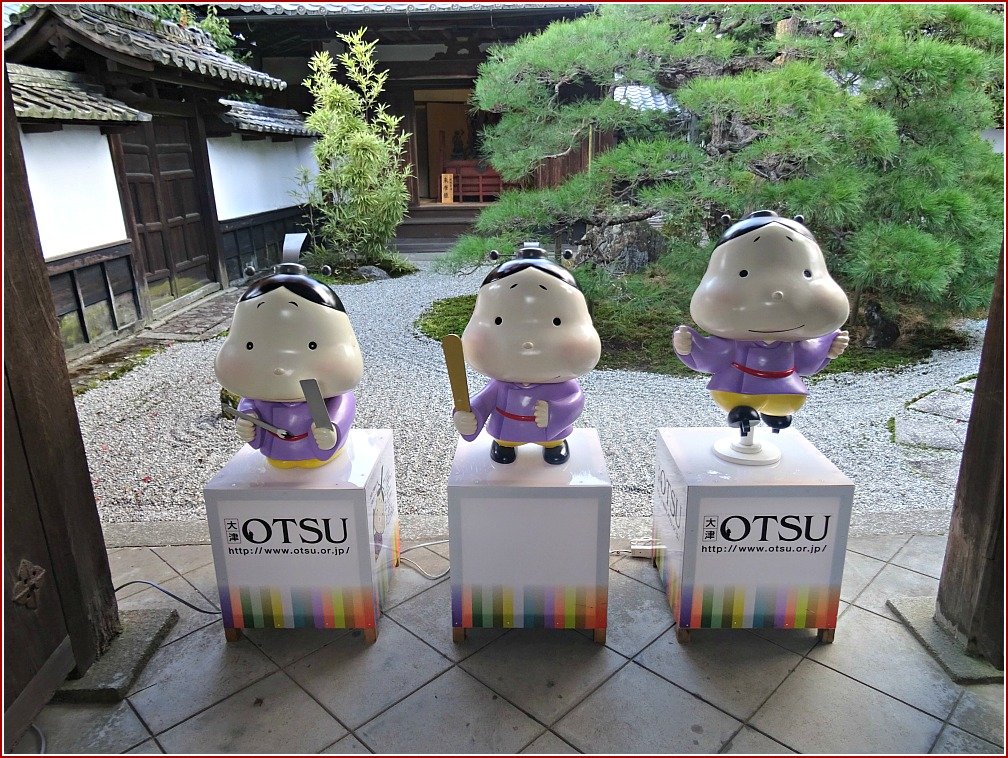 The principal Nyoirin Kannon statue is able to be viewed from March 18 to Sunday, December 4, 2016.

Otsu is only one stop from Kyoto Station.

To get there from Kyoto train station. Tokaido Line to JR Ishiyama Station, then take a 10-minute bus ride or transfer to Keihan Ishiyama-Sakamoto Line to Ishiyama Dera Station and walk for ten minutes.

Or arrive at Ishiyama station and walk through Ishiyama then along the river. It’s a beautiful walk if the weather is good.

Another value-added way of arriving by train is by the private Keihan Line. They have an interesting Koto Koto Otsu One Day Pass which allows for a day of sightseeing.

Dinner in a Japanese Home
Next Post: Kyoto Train Station and Christmas