The weather was perfect for snorkelling and fishing at Pelorus Island, just half an hour from the fishing town of Lucinda near Ingham in North Queensland.

Lucinda is the perfect distance from Townsville.  The road trip, towing our 4.75 aluminium runabout, is long enough to give a going on holiday feel and short enough at 1.5 hours.

I don’t have an underwater camera so there are no beautiful underwater coral shots to show you, just one or two taken from the boat…

Where to stay in Lucinda

Or stay in cabins at Wanderer’s Caravan Park Lucinda. The caravan park is very friendly and the cabins small but quite modern and comfortable.

Getting Ready to Fish for Coral Trout

Where to Buy Bait and Ice

First stop was the Morley’s Iceworks in Lucinda for the Pilchard bait that coral trout just love. Morleys sell other kinds of bait too and Ice plus a range of locally caught fish and prawns to eat – yum. 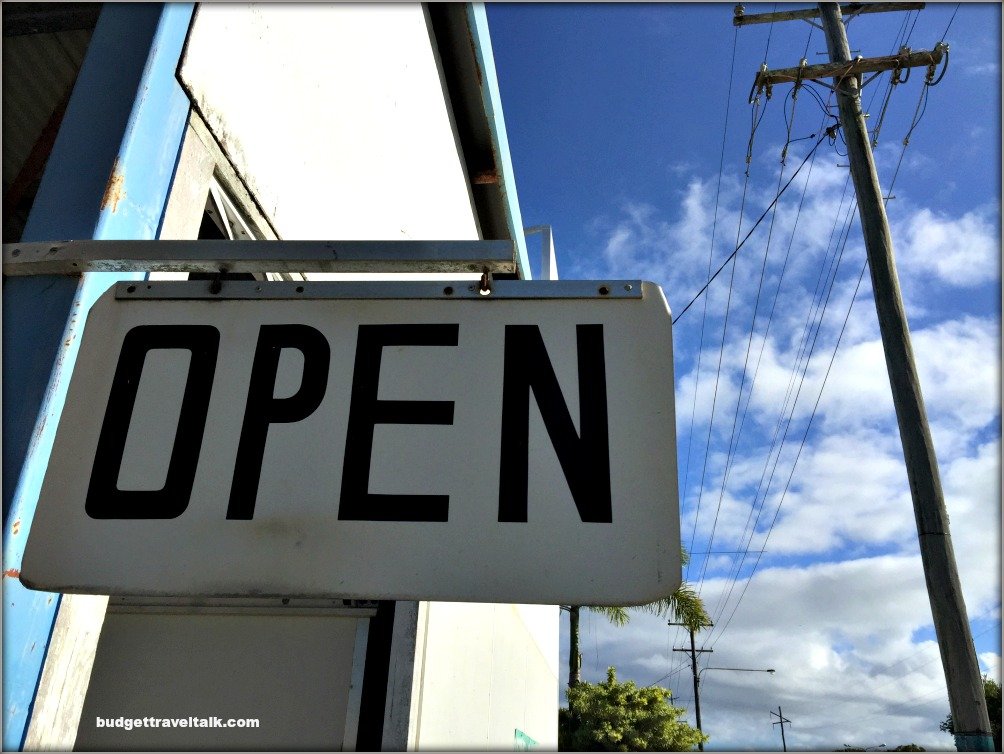 Where to launch your boat near Lucinda

Arriving from Halifax, turn left at the Port of Call (Lucinda Pub) and follow the road a short distance to Dungeness. The four lane boat ramp with floating pontoon makes launching easy.

The deep drop off at the end of the ramp is marked with a yellow line on the floating pontoon. There are a lot of parks but on popular days they do get full and people then park their trailers on the roadside.

Sailboats should be aware of overhead power lines at the ramp/car park.

Turn right when leaving Dungeness Creek, following buoys through the narrow channel and follow the long jetty out toward Pelorus. The big Island across from the creek mouth is Hinchinbrook Island.

This seabird sang as we left the boat ramp at Dungeness. 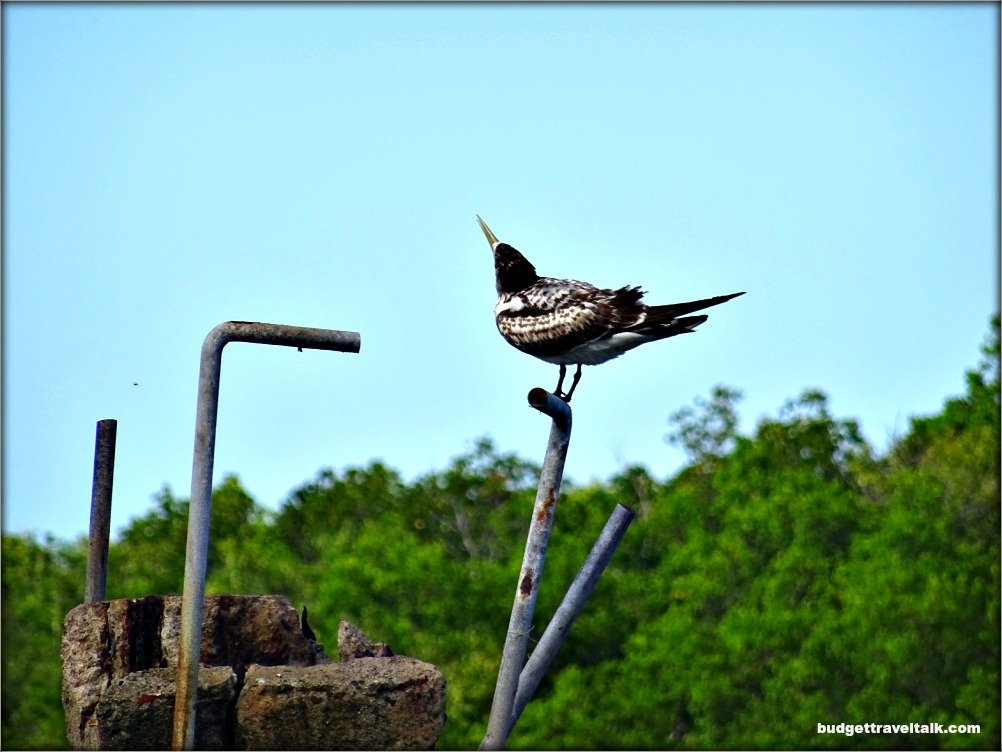 Approaching Pelorus Island on the left and Orpheus on the right. 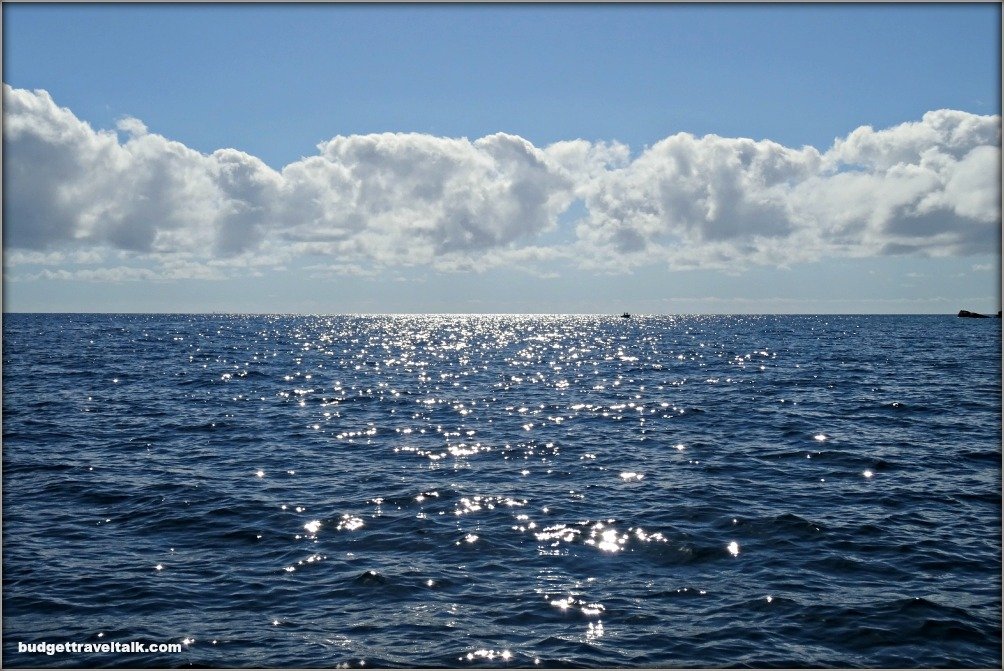 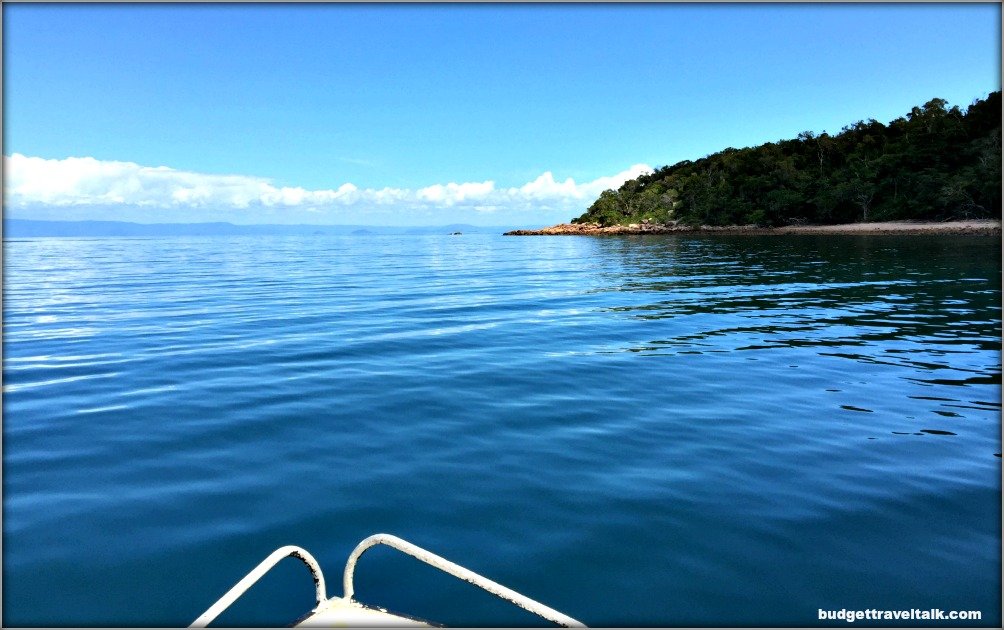 Where is Pelorus Island North Queensland

Pelorus Island Australia lies 800m north of Orpheus Island and is surrounded by fringing reefs.  Coral Princess Cruises have a long term private lease on a patch on the southern land side of the island which their Great Barrier Reef cruises use for picnics.

Pelorus Island is also known as North Palm Island and as Yanooa Island by the aboriginal community. As we circumnavigated the island I noticed a white rotating turbine on a hilltop which I later found to be a navigation structure built by the Australian Maritime Safety Authority, together with a service helipad.

Pelorus Island goats roam the island although an eradication program has culled the numbers.

Free Camping (without facilities) is allowed in the designated campsite on the mainland side of the island behind the sandy beach.

Bring everything with you and leave nothing behind.

It’s camping on a deserted island!

Have a fresh water supply onboard.

After an unsuccessful half hour fishing for trout, the coral bommie off the back of the boat looked too inviting.

The word Bommie comes from the Aboriginal word Bombora meaning Mountain of Reef and is a stand alone reef structure of any size.

Marty’s black and blue 1 m wetsuit looks the part while my faded blue and yellow old stinger suit does anything but. The fish don’t care about attire though and the bumble bee that kept trying to land on me obviously thought I was a flower. 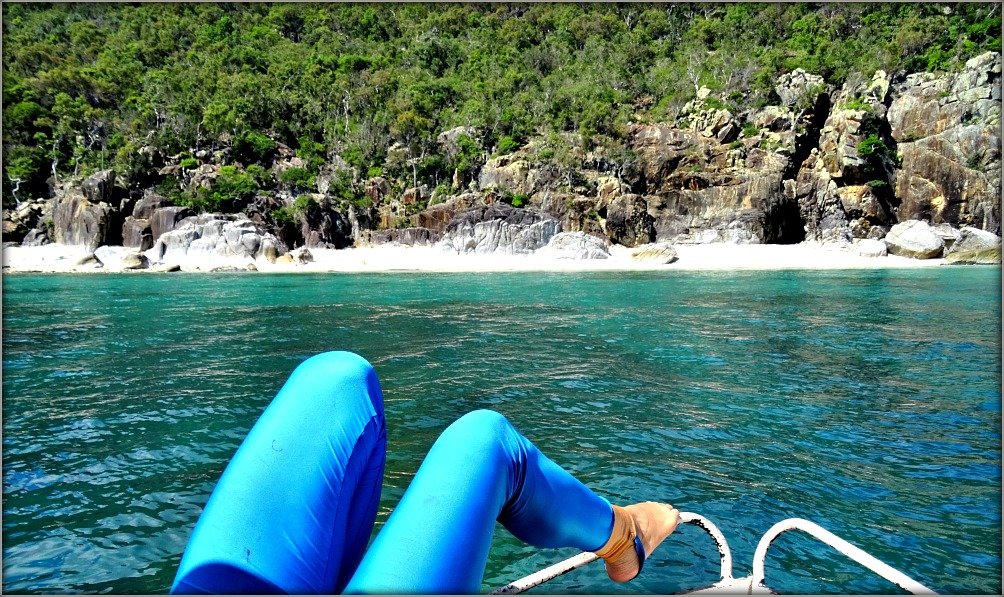 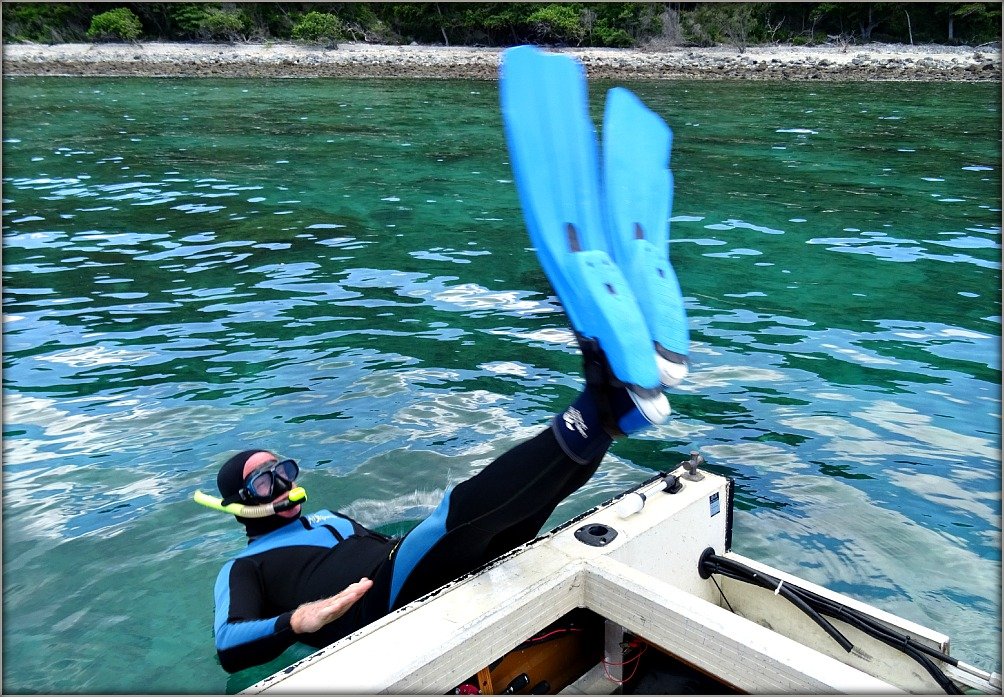 Blue and yellow fusiliers escorted us over a fair crop of coral but nothing too flash, and no clams or coral trout. It was fantastic to be snorkelling on a reef again – it had been far too long. The scrape marks on the solid brown coral were most likely from the buck teeth of parrot fish as they chew coral algae.

We had forgotten the removable boat ladder, but all those Gym classes and Arc yoga classes paid off and I had no trouble clambering over the back of the boat using the motor leg to boost myself.

I’m fairly certain Marty was relieved he didn’t have to haul me in!

Next was another Pelorus Island snorkelling spot, marked with two white float moorings, our reasoning being that the moorings indicated the presence of good coral.

With a pounding heart, I swam straight into a wall of white flower shaped corals, looking strangely like a fancy art installation with other surrounding corals in the yellow range. Just Beautiful.

The shy fusilier fish didn’t come out to play, choosing to hide in the dark cave recesses instead.

The Coral could be seen from the boat. 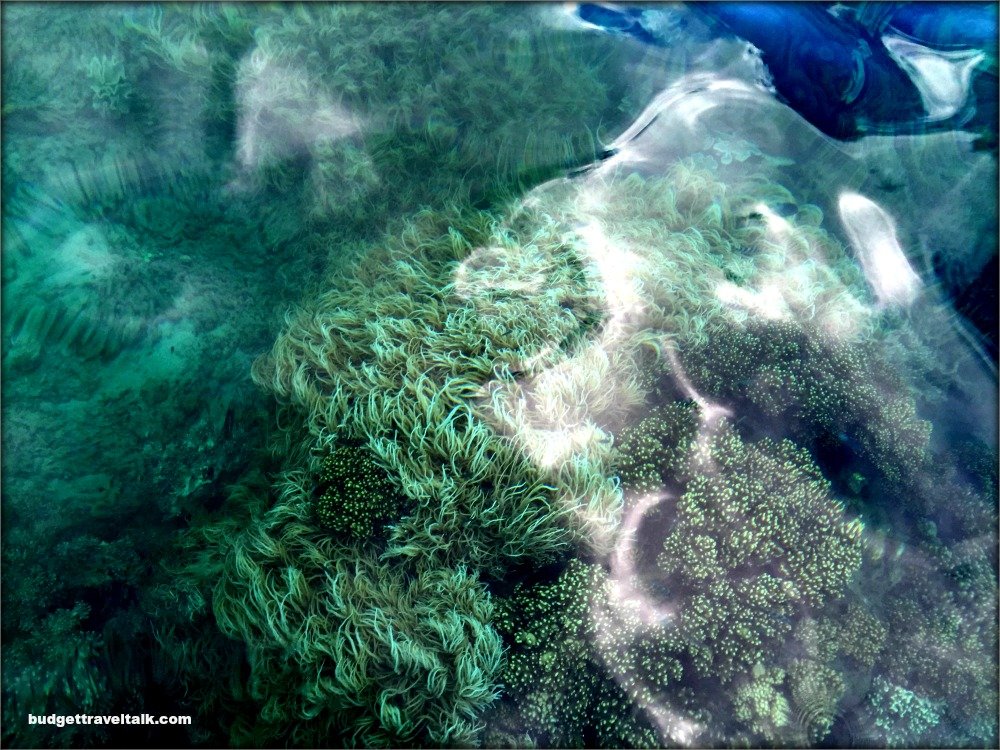 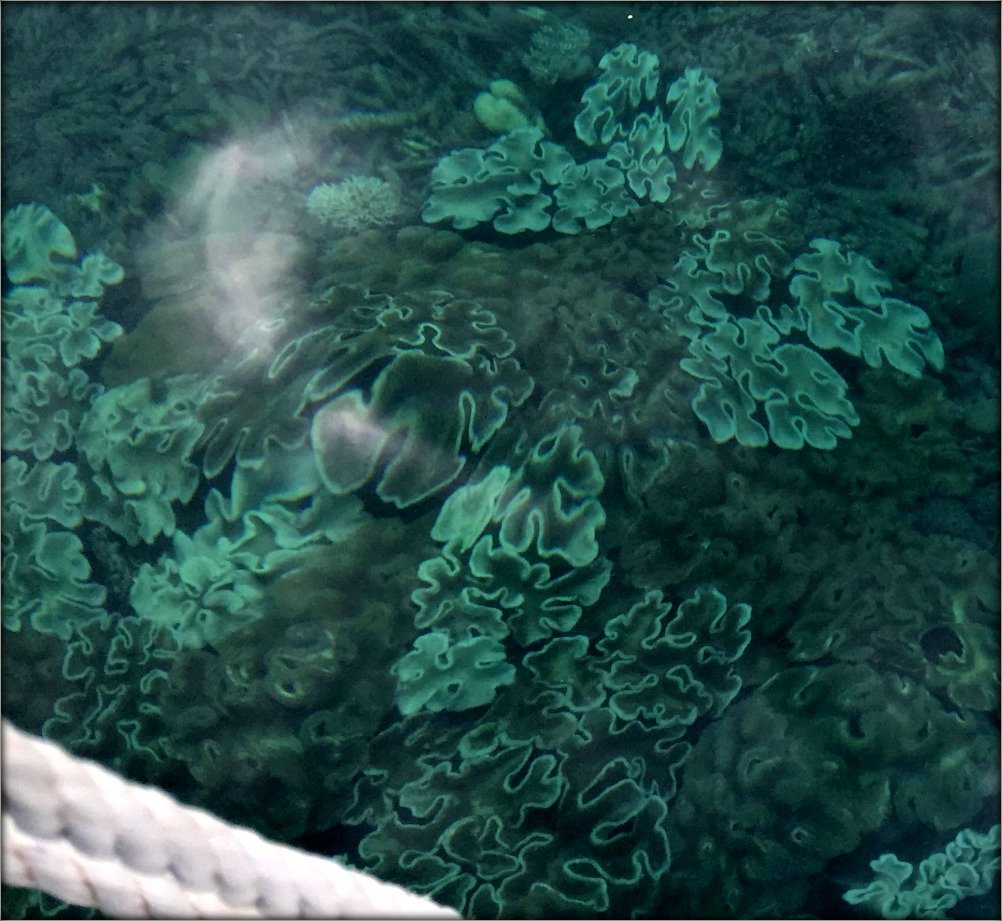 Our next spot was on the Pelorus side of the channel that separates the two islands and was the best spot of the day.

I loitered inside a small sheer drop amphitheatre of hard yellow corals surrounded by gently swaying soft corals, smooth hard brain corals and a lonely fragile fern coral that leant into a 30cm gap between bommies.

In between the clumps of colour sadly, were open spaces filled with dead branch coral. The sun chose this time to disappear and the colours became correspondingly subdued. Still there were a good array of dusky pinks, bright purples and yellows including the only clam sighting of the day.

Fat long brown sea cucumbers sat still on the sandy bottom and schools of fusiliers came out to play. So close, but yet just out of reach. Not the thick schools I remember at Low Isles (out from Port Douglas) years ago, but a delightful experience anyway.

Coral trout, parrot fish, Butterfly fish, Stripeys and a lot of small brightly coloured fish whose names elude me, darted here and there amongst the coral.  It was our last snorkel for the day and we lingered, soaking it all in as we criss-crossed the area, popping our heads up periodically to check on each other, the boat and to point out special sights. 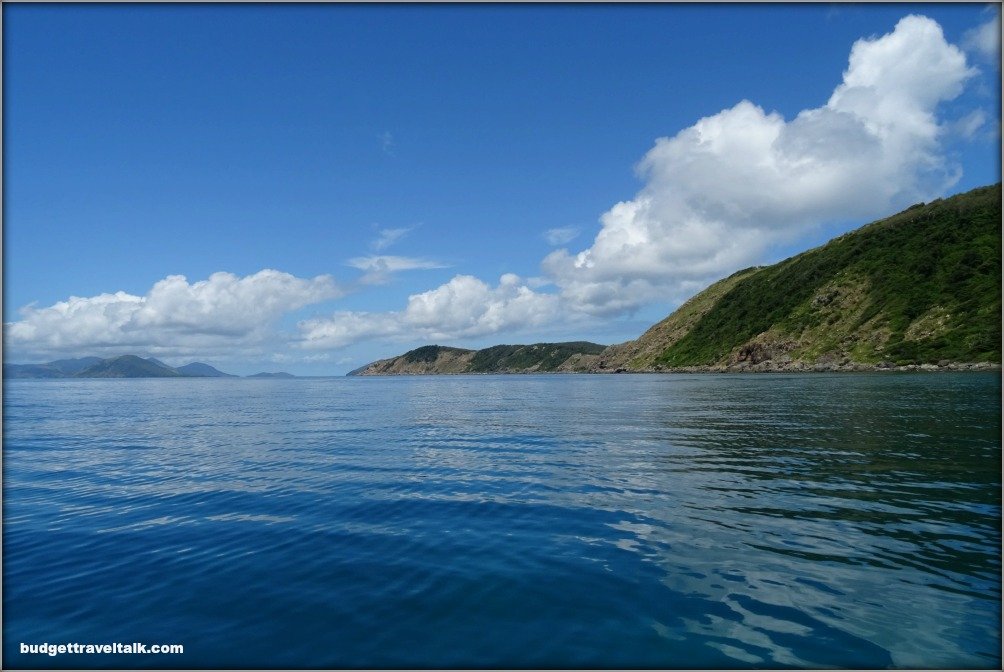 Back onboard, a pair of FA18 fighter jets flew very loudly overhead.  No sooner had I unblocked my ears, than they crept up from behind, tipping wings vertical above us, before shooting off toward Palm Island. We felt very insignificant in our 4.75m boat as they roared overhead – awesome but scary.

Fighter Jets are a common periodically in Townsville and they were probably up this way practice bombing Rattlesnake Island (further south toward Townsville).

Where is Orpheus Island?

It can be accessed by private or charter vessels.

There are three areas for self sufficient campers on Orpheus Island (fees apply).

Heading down the seaward side of Orpheus Island. 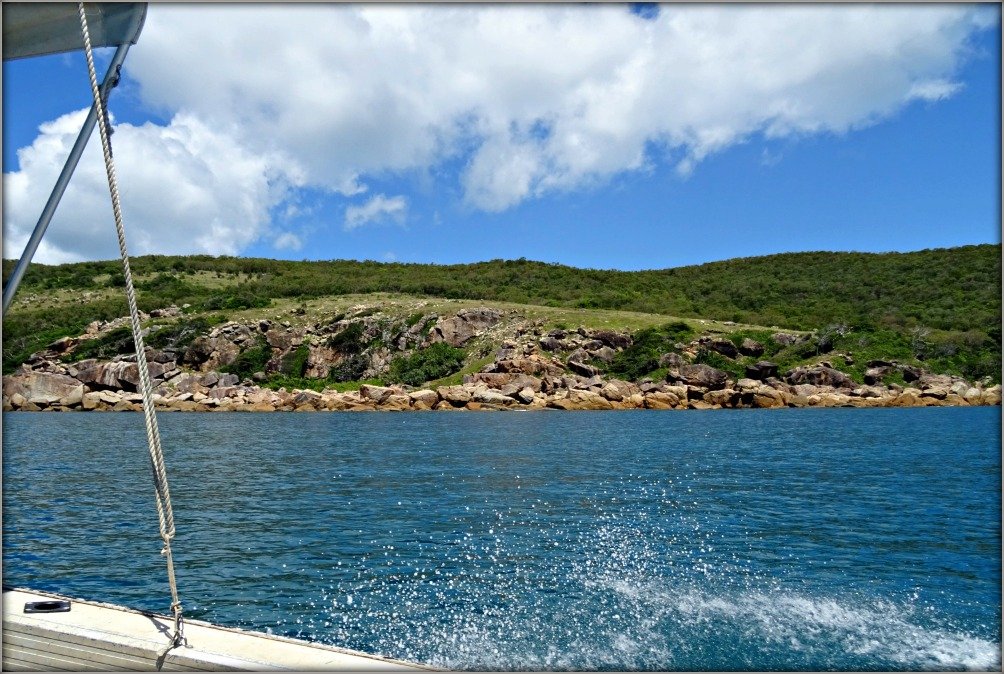 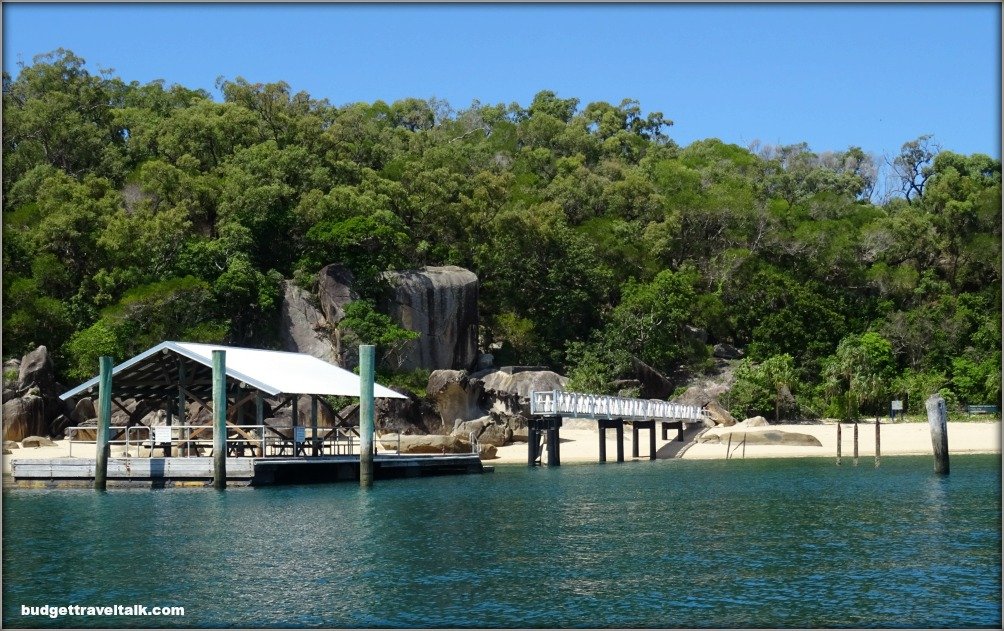 Rounding the southern end of Orpheus we boated toward Yanks Jetty, so called because of it’s past as an American submarine repair station during WWII.  The old facilities have long gone but the name remains.

The pontoon is a popular stop with undercover picnic tables and resident fish to feed and swim with.

There is a 100m Exclusion Zone for fishing around Yanks Jetty. 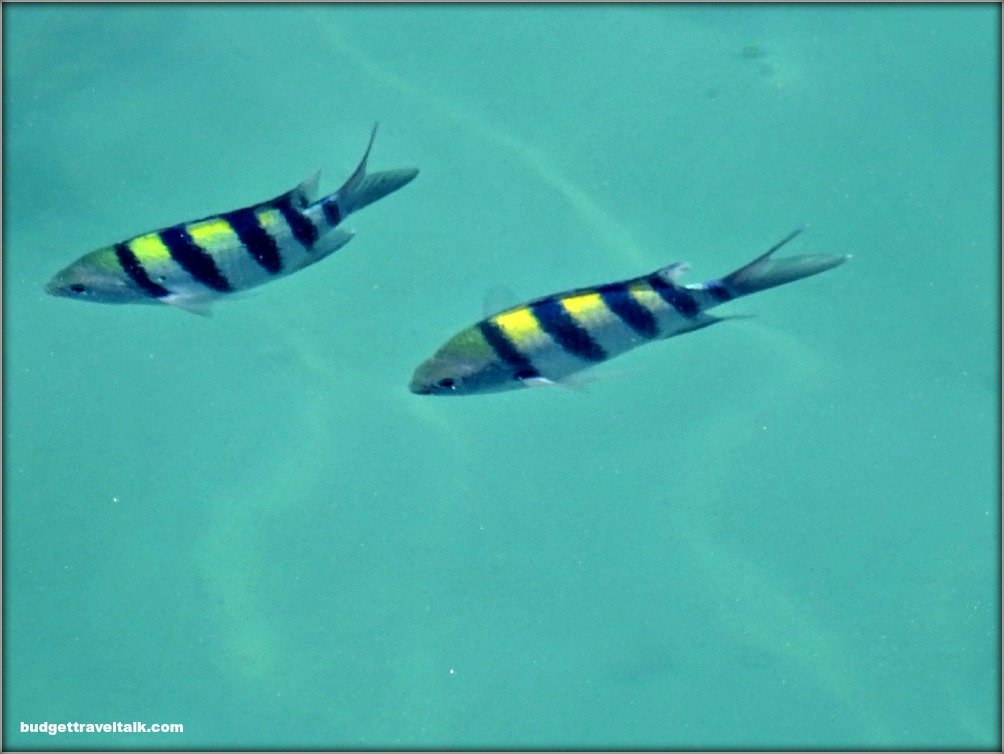 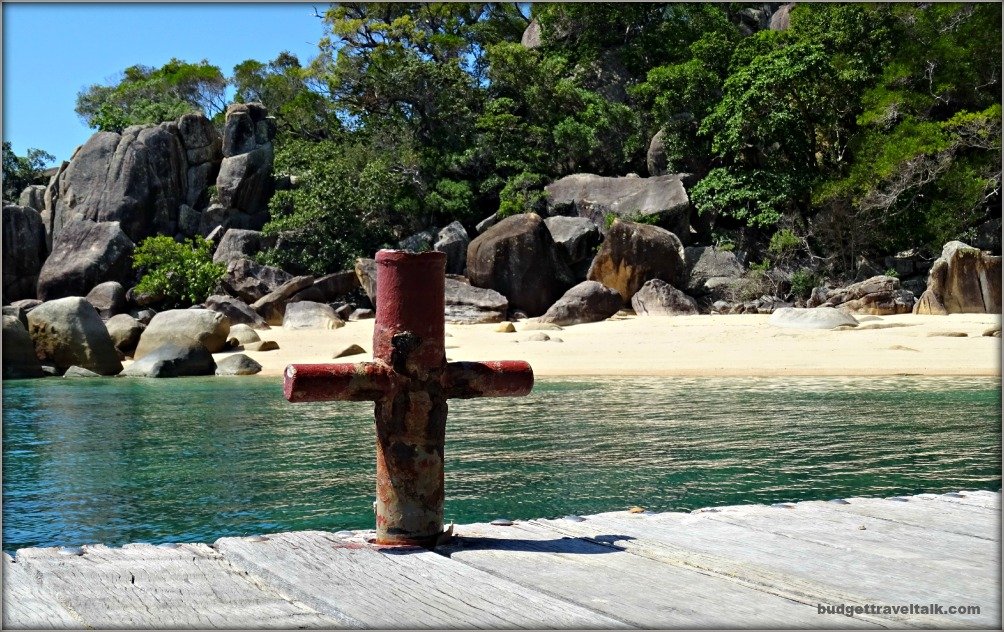 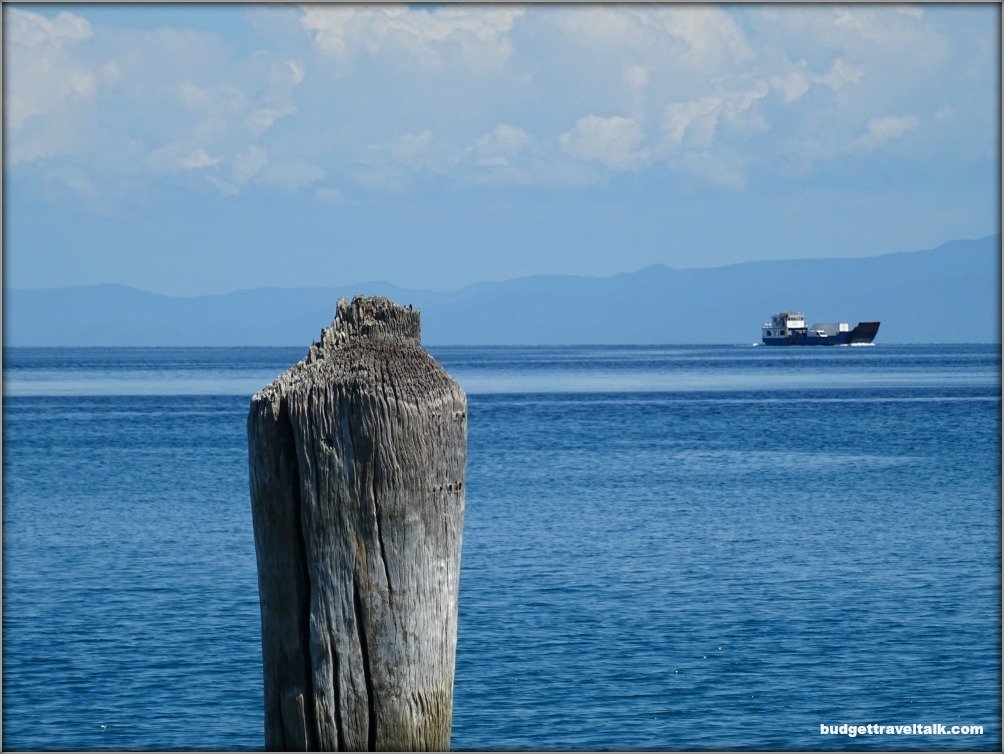 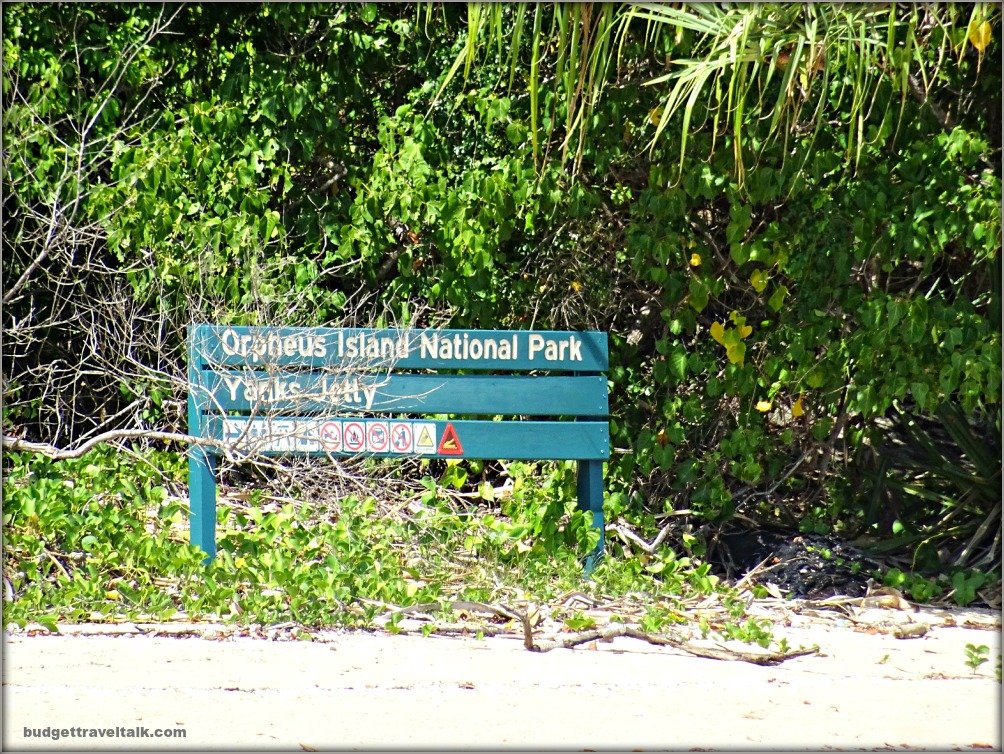 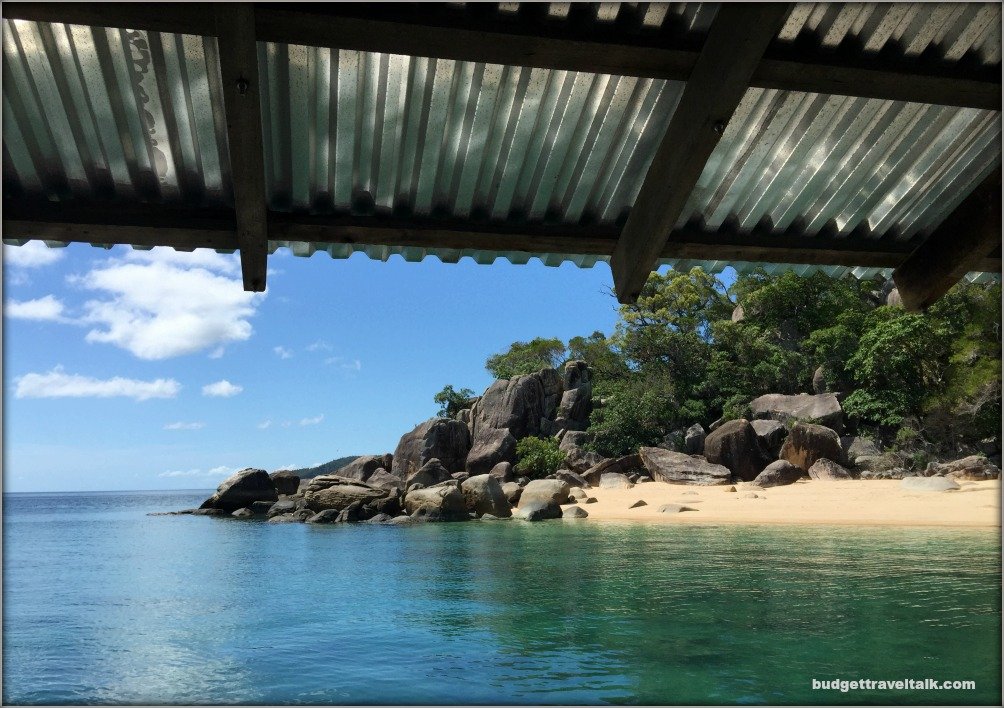 Fishing in the Marine Park and Zoning Plans

We positioned ourselves in our favourite fishing spot in the Yellow Zone outside of the Green Zone on the southern tip of Orpheus Island.

Green Zones can not be fished at all.

Fishing in the Yellow Zone

These are my own experiences and true at the time of originally publishing in 2015. Please research the Marine Park Rules to ensure you comply.

Floating a pilchard out the back of the boat, I made a prawn sandwich for lunch and prattled on about what a gorgeous day it was and then… I landed a 10kg Mackerel.

Well to be fair it was a joint effort.  The fish swam around the anchor rope and Marty untangled it for me and swam it down the side of the boat so I could pull it in.  I’m claiming it.

The Zoning Plan does not control bag limits and fish size. That is controlled by Queensland Fisheries.

Know before you go to Pelorus Island and Orpheus Island.

The Islands can also be accessed from Taylors Beach 20 km to the west on the mainland. I personally find the sea entrance arriving back into Taylors more confusing than Lucinda.

First timbers should return to the mainland in daylight in either case.

Scuba Dives can be arranged via Remote Area Dives.

Fuel for our outboard motor cost $50 for the day.

At the end of the day we both asked ourselves why we don’t snorkel here more often.  It was agreed we will do so in the future – we are so lucky to call this part of the world home.

Do you have islands that are special to you?  Are they tropical islands or cold-weather islands?

If you do drive north from Ingham follow this guide to Cardwell’s Spa Pools.